Jacques Chibois has brought the Royal Gray restaurant in Cannes to two Michelin stars (the first place in town that achieved this), so opening his own place was the most sensible thing to do. In 1996, after buying an 18th-century country manor La Bastide Saint-Antoine, where once stayed prominent faces of a global fame from the Kennedy family to the rock legend Rolling Stones, he opened a restaurant and a small hotel under the same name. Only a year later, La Bastide Saint-Antoine, was awarded two Michelin stars (in 1997). 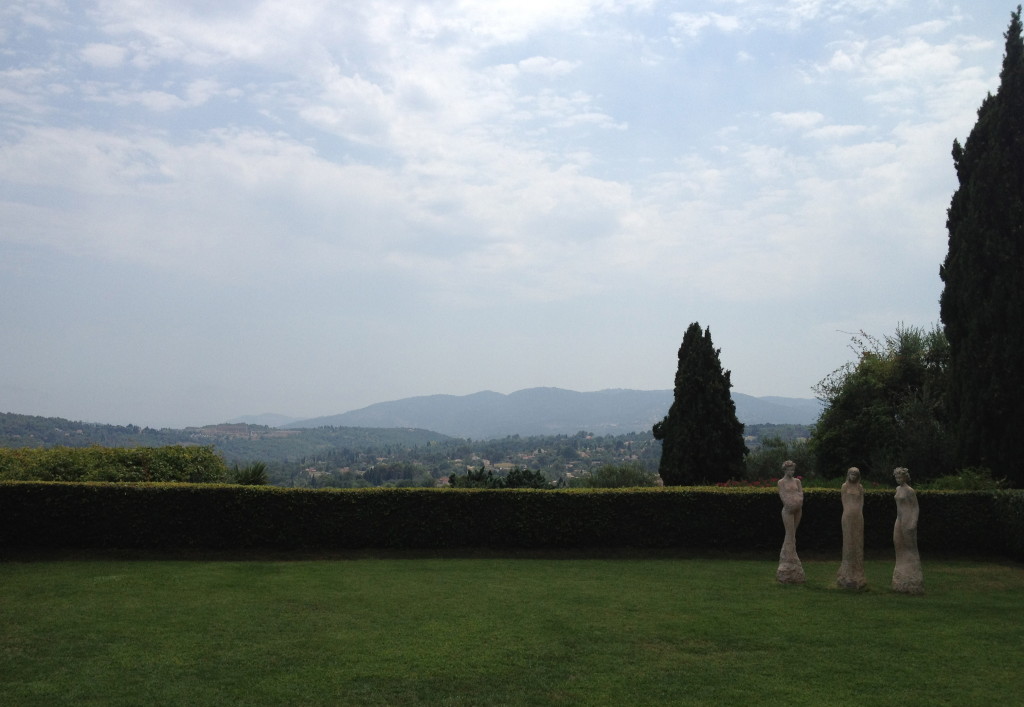 His five-star place soon became a member of the Relais & Chateaux and Relais Gourmand hotel groups.
Cuisine: French gourmet using local provençal ingredients
Visit: Summer 2012 & March 2013
Price: Very high (appetizers in the above €50 level and main courses above €70; great deal lunch menu €59).
Atmosphere: From October through April, the cosy and chic inside rooms with fireplaces host all the gourmet cuisine appreciating diners. The two restaurant rooms are elegant and comfortable, but once you stop by during the summer, you will be seduced by the outside garden dining area. Its panoramic view overlooking the Provençal landscape with the Mediterranean sea in the far horizon is a refreshing retreat for the soul. Your lunch or dinner transforms into a spa treatment. Hearing just the tweeting birds, tirelessly buzzing crickets and muted voices of the fellow diners becomes a mind-detoxifying escape to the country for any city dweller. Dress fresh and elegant and you will be in harmony with the place. Ladies do not to bother with high-heels when eating in the outside area. 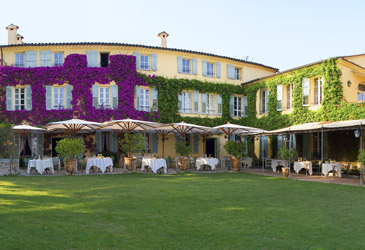 Food: Elegant, light and fresh. The chef’s philosophy is about playing with the gifts of the local abundant nature. One of his ideas is that “flowers have the same role as herbs and spices”. Therefore, as an homage to the town of Grasse famous for its perfumes and flowers, he includes flowers, spices and other aromatic ingredients in his culinary creations. He changes the ingredients seasonally, so if you come in summer you might still want to try it in the fall or winter with the more hearty dishes. The portions are quite small though so do not worry that you will leave feeling too heavy after this gastronomic treat. the menu is not in English, but the staff happily helps you with translation.

At the beginning of your meal, instead of a butter, you will be served a delicious home-made olive oil from the grove on the property accompanied with crunchy bread crackers.
Later, an amuse bouche of daily specialties in tiny portions will tune your palate for the chef’s aromatic cooking performance.
During the summer I have discovered Monsieur Chibois’ cuisine with the great value Lunch menu for €59. Most of the appetizers are more expensive, so this three-course meal including a dessert is a great bargain for the quality you get. This menu is available daily except Sundays and holidays. It excludes beverages so if you are driving, as I did, and stay with water and tea then it is an easy winner for you.
My starter of La Bolognaise de Homard aux Asperges, Coulis de Roquette et Salade rewarded my taste buds with tantalizing complexity of each of its ingredients. The light green pea colored cold gazpacho, in France known as veloutè, with morsels of lobster swimming inside, green asparagus spears sticking up next to roquette leafs. It was creamy, while light and complex, but simple when each the lobster, asparagus and roquette was eaten separately. Using the finest local ingredients underlined the dish. 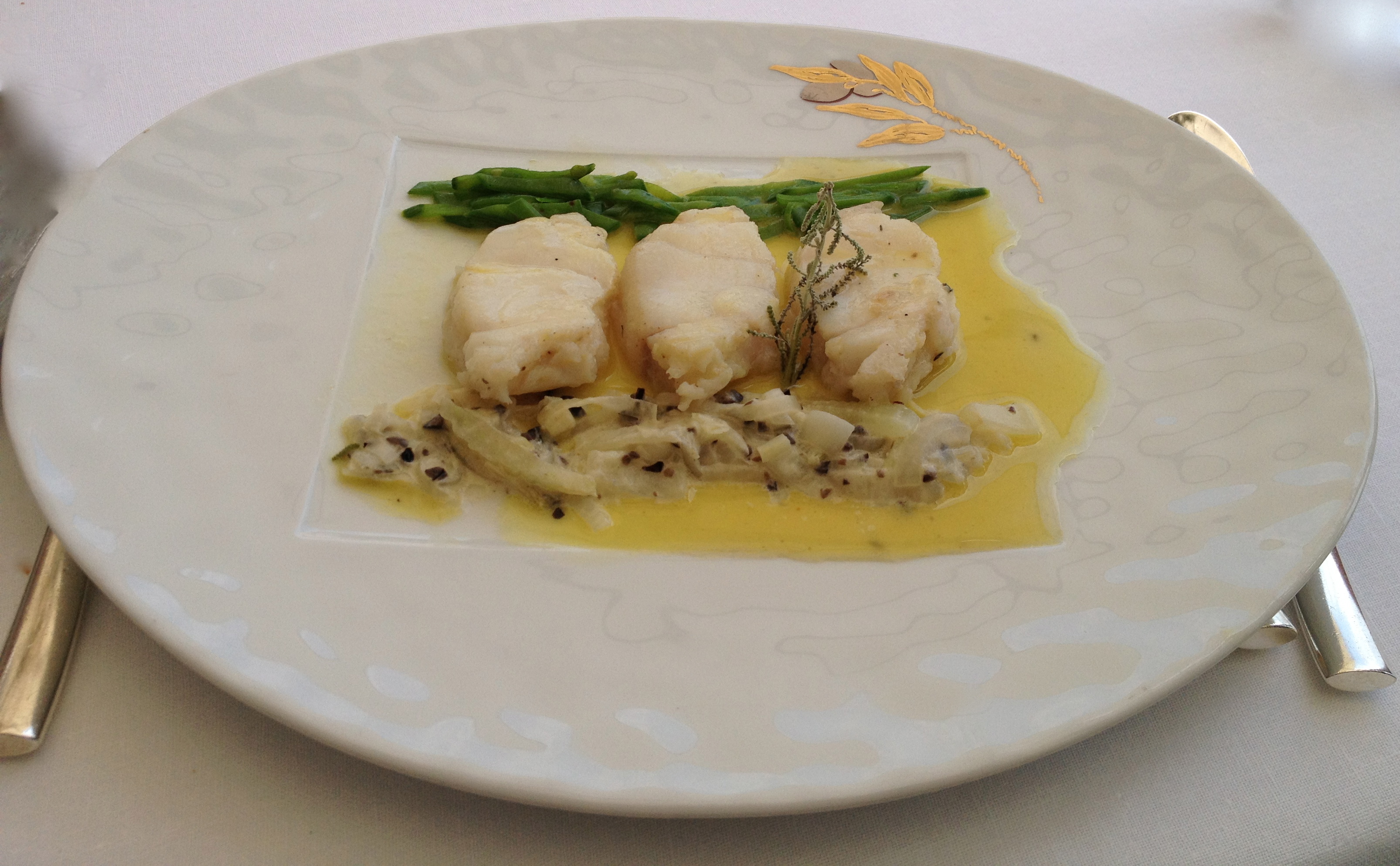 My fish main course of Les Petites Rouelles de Lotte à la Verveine et Santoline, Petits Oignons en Grassoise d’Olives Noires, Pois Gourmands Natures won me over because of its Verveine sauce. Verveine is a leaf from a local tree, highly popular and used in tea infusions across France. Its citrusy, lemongrass-like aroma is refreshing. Combined with a side serving of cooked onion strips with chopped black olives and green pea husks the verveine sauce was enriching the meal with an exquisite summer feel.

As a fan of ripe seasonal strawberries, I had the Les Fraises et Sorbet à la Gelée de Citronnelle Crème de Mascarpone à l’Amande for dessert. The strawberries were mind-blowing, succulent and somewhere between wild and normal strawberries in terrms of taste. Slightly more sweet than regular ones and bigger in size than the wild strawberries. The sorbet was not too sugary, rather refreshing and faithful to its main ingredient-the fruit. The mascarpone was like a white bed in which the red heaven of berry creations was residing. Its creamy texture balanced the acidity from the berries and calmed down the coolness of the sorbet.
The chef has also two tasting menus of several courses. Scents and Flavors Menu for 169.00 € and Discovery Menu for 190.00 €, so if you want to pamper yourself even more and thoroughly explore the chef’s cooking. 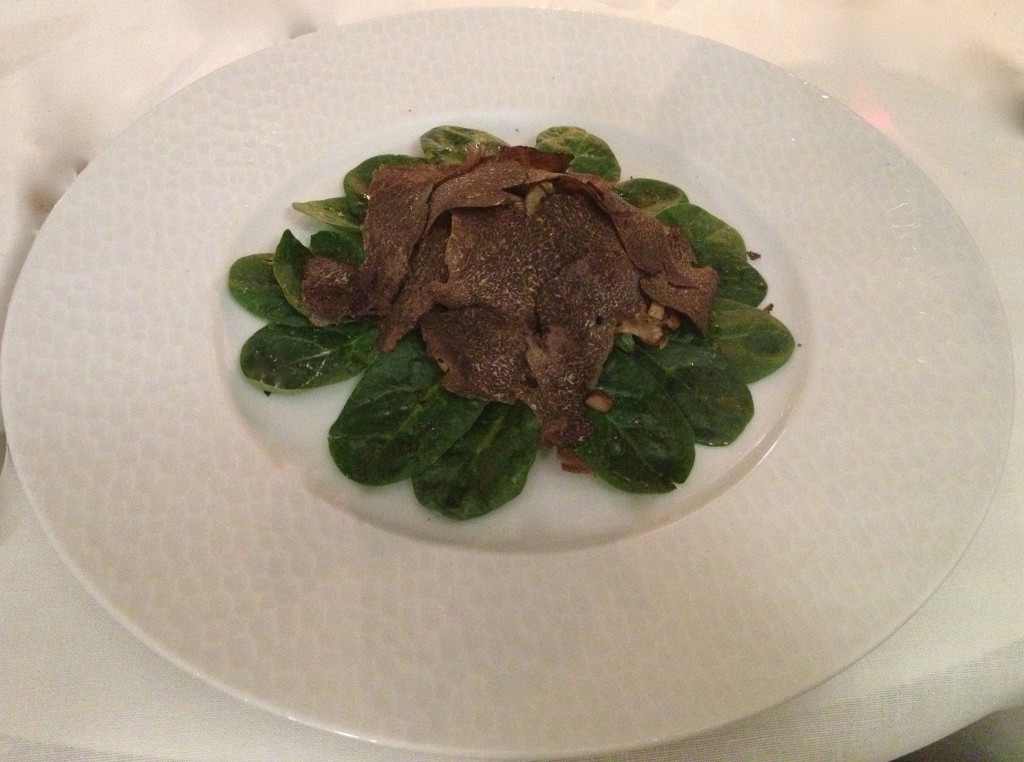 During the winter the menu is more focused on local ingredients such as the truffles from Provance and winter vegetables.
Drinks: Peaking in the wine list was impressive. With French focus, the selection was wide and wines from all corners of France were having their ambassadors on the list. During my second visit we stayed over at the bastide (which has cosy rooms making you feel as if you were at home) so I could enjoy a glass of wine made by the monks at Lerins islands, just off Cannes. Their red wine is quite robust, therefore I would rather recommend it as an after-dinner drink or a good companion to game and meat. With Chiboas’ delicate food white and lighter red burgundies (Pinot Noir) or a more affordable Côte de Provence such as rose or fruity Merlot, work well. 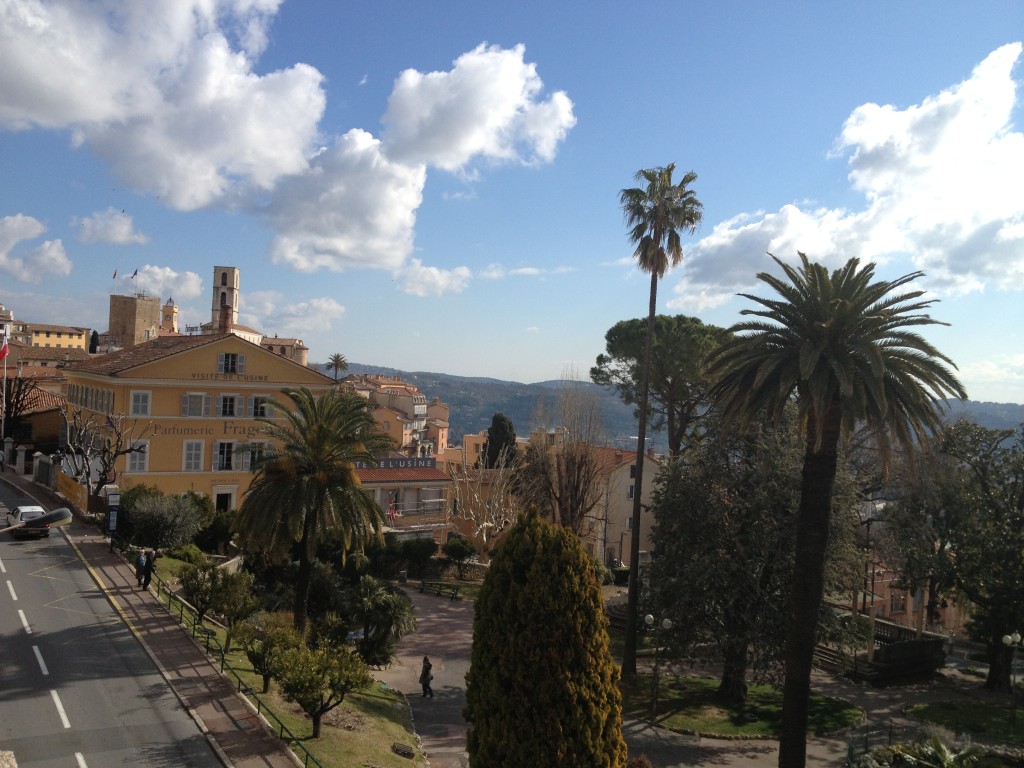 A welcome option for drivers is to stay overnight at the hotel as we did so we could savour as much wine as we desired. Although, moderation in drinking as well as eating is best for not spoiling the following day in the charming provencal region and the picturesque town of Grasse. The Jacques Chibois’ light gourmet cooking will take care of the later, but the number of bottles you order is purely up to you to decide.
Opening hours: Since it is a hotel, the lunch and dinner menus are available until guests are present.
Contact: +33(0)4 93 70 94 94; info@jacques-chibois.com
Address: 48 Avenue Henri Dunant, 06130, Grasse, France