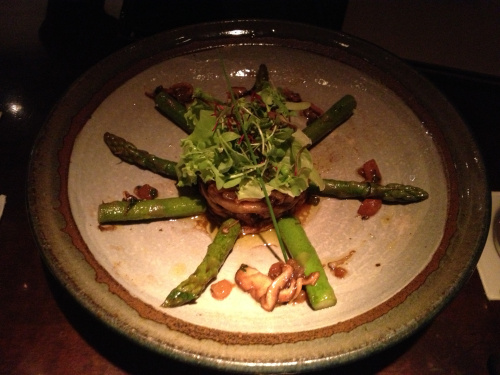 Atmosphere: The entrance to the restaurant is very discreet and guarded by security men. One would never think that there is a restaurant behind the simply looking wall along the Rua Lisboa. As the security opens the door and you walk through a tiny garden into the first room, you know that Jun Sakamoto is not just a traditionally simple Japanese restaurant (the interior was designed by the chef after whom the restaurant was named). It is full of classy people some conservatively dressed in ties and business suites others – especially the supermodel looking youthful women – in chic evening mini-dresses or anything that is currently fashionable. If you want even more privacy then dine in the back room. Both rooms together including a sushi bar accommodate not more than 30-40 people, so it is quite small. You still will be seen by the top players on the São Paulo rich and powerful league so better dress up for that as good as you can.
Food: For how much exclusive this restaurant tries to be, the food is not even slightly comparable to any of my favorite japanese places in LA, New York, Seattle or Paris. Rumors circulate in and out of the city that there is not much of excellent japanese food in Brazil yet. I take it as an explanation of my recent disappointment at Jun Sakamoto. For the restaurant being very expensive, I will not give it likely a second chance when there are so many other great restaurants to dine at in São Paulo. 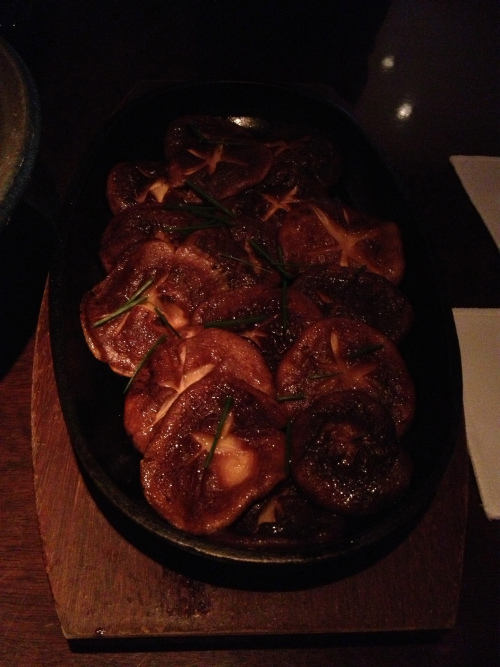 We got a number of starters to share and none of them had particularly impressed our taste buds. The Salmon tartare (Tuna tartare with foie gras is more popular here, but we were in the mood for salmon) was tiny, the fish was good but excellent as you would expect for the price and the sporadic portion of fish eggs on the top of it was not enough to bring more complex flavors to the dish. Continuing with a plate of fatty tuna sashimi, which was contrary to the previous too large portion of just a raw and not very tasty fish we started to worry a bit about the restaurant’s flattering reputation. The savior came in the form of the next order – the Asparagus salad, which was better and perhaps the only plate we quite enjoyed. The vegetables were fresh and crisp and the sauce was tasty.
From the warm dishes the Seared mushrooms lacked everything that was savor-appealing. I dare to claim that they were boring. Right the opposite of the vibrant and sizzling Mushroom Tobanyaki they do at Nobu restaurants elsewhere. 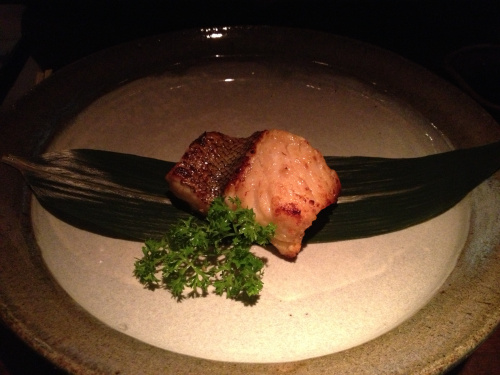 The staple of many Japanese restaurants globally is the Black cod with miso. After the previous unsuccessful courses we ordered exactly this dish as we thought it might be more reliable. The fish was of a good quality, the sauce though was not intense enough and much more plain than we are used to.
My partner tried the omakase sushi (ingredients selected by the chef who serves you to the point of your fullness, it shows the chef’s skills the best). They do it differently here though. You have to select how many courses you want and that is what you get. Omakase is supposed to display the chef’s innovativeness, creativity and the quality of his ingredients. The sushi we got did not look and taste exceptionally – it was rather normal, but with a high price tag. 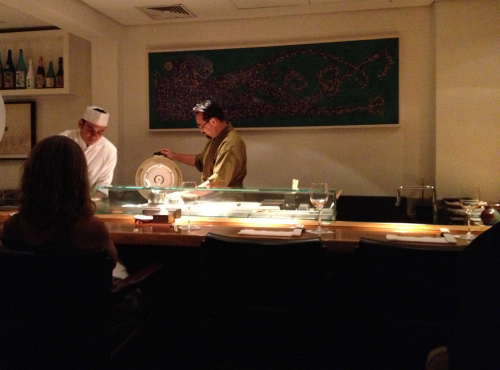 Drinks: Sake and wine lists are good, although not particularly wide. You can find some less usual treats on the wine list though. We went for the Chilean Amayna Barrel Fermented Sauvignon Blanc 2007. Seeing a barrel fermented version of Sauvignon Blanc is quite rare. This refreshing grape varietal made famous by the Loire Valley in France as well as New Zealand is often let to express its freshness and zest. It was one of these quirks that one tries just for the sake of its differentiating quality. Wine Spectator gave it 91 points (out of 100) to this Leyda Valley warrior. I would not go as high since the barrel overwhelmed the fruit and its acidity in a greater proportion then it should have. The new oak left some nutty and vanilla aromas in the wine while the fruit turned into something like a fig marmelade than a refreshing white peach or grass that you can typically taste in wines made from this grape varietal. The depth though complement the raw fish quite well. With japanese food I would rather go for an oaky Chardonnay or a Gewurtztraminer from Alsace.
Cuisine: Japanese
Visit: December 2012
Price: Very expensive (Top CEOs, fashion models and Tv stars come to dine here in a secure and an almost invisible location).
Opening hours: Only for dinner: Mon-Thu: 7pm-12.30am; Fri & Sat: 7pm-1am; Closed on Sunday.
Address: Rua Lisboa 55, Jardim Paulista, São Paulo, Brazil.
Contact: Tel: +(55) 11 3088 6019