Thomas Keller is still one of the most cherished chefs in North America. His French Laundry in Napa Valley remarkably enlivened the gastronomic scene in the US. Along with the French Laundry his French bistro Bouchon mushroomed and he also opened Ad Hoc in Yountville, the gastronomic heart of Napa Valley. In 2004 he opened the most awarded from all of these French Laundry subordinates – Per Se in New York. The three Michelin restaurant was for years helmed by Keller himself, but since 2010 Eli Kaimeh, Per Se’s chef for years, took the helm leading the restaurant’s daily feat for perfection woefully. Per Se steadily loiters at the summit of the restaurant Everest in New York unwilling to climb down. 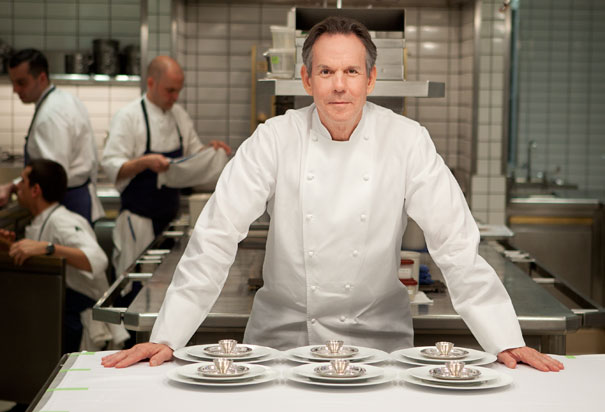 The entrance to Per Se is located in the New York’s Time Warner Centre. The journey up to the fourth floor via the shopping mall escalators hits you with the pompous massive wooden doors with golden handles marks a serious dining establishment. Enter the unpretentious mecca of culinary innovation and gustatory pleasure. It does not bite you, but you will devour plenty of tasty stuff inside. The Salon is the bar seating area offering some of the restaurant tasting menu dishes á la carte. It feels darker and more intimate than the 16 table heart of the restaurant. The windows open to the Western corner of the Central Park. At the Salon no reservations policy like at Le Bernardin and Daniel allows for a casual show up and gourmandise. Considering that the restaurant is usually fully booked at least a month ahead, this a savvy way in.

The food is balanced, impeccably sourced and reasonably sized (considering all that extra stuff you are treated by, but you did not order, that is wise). Starting with the famous amuse bouche of sublime Tuna mini cone whether you eat at the bar or the restaurant, the score is one-one. The thin cone envelops a foamy tuna mouse melting in your month like a whipped sea wave swooshing along assembled flavours from its journey from the water to the chef’s hands. A meditative start to a superb meal.
There is usually at least one vegetarian (or vegetable-based) dish. Like a haute couture salad, the Hawaiian Hearts of Peach Palm were wonderfully assembled. A celery branch, an exotic Cara Cara orange, preserved green tomatoes and horseradish crème fraîche. Refreshing, zesty and savoury sphere for a light appetiser.
A foie Gras is a mainstay at gastronomic restaurants using French cooking techniques and Per Se is not an exception. The controversially produced goose liver is banned in some countries and states including the sunny California (home to the French Laundry), but not in the open-minded New York. Daily changing variations of culinary adventures with it can feature Slow Poached Élevages Périgord Moulard Duck Foie Gras served with poached rhubarb, refreshing young fennel, crunchy and elegant Spanish Marcona almonds, rich Greek yogurt sprinkled with watercress. This was the rare occasion for me to taste it since I do not support this cruel elevage, yet once every couple of years I succumb to ordering it since the smooth liver  is delicious.
You can add a scoop of the luxurious caviar. Served with blinins and the Per Se balancing touch or spooned over other dishes, this extra hedonism will cost you well over $100. 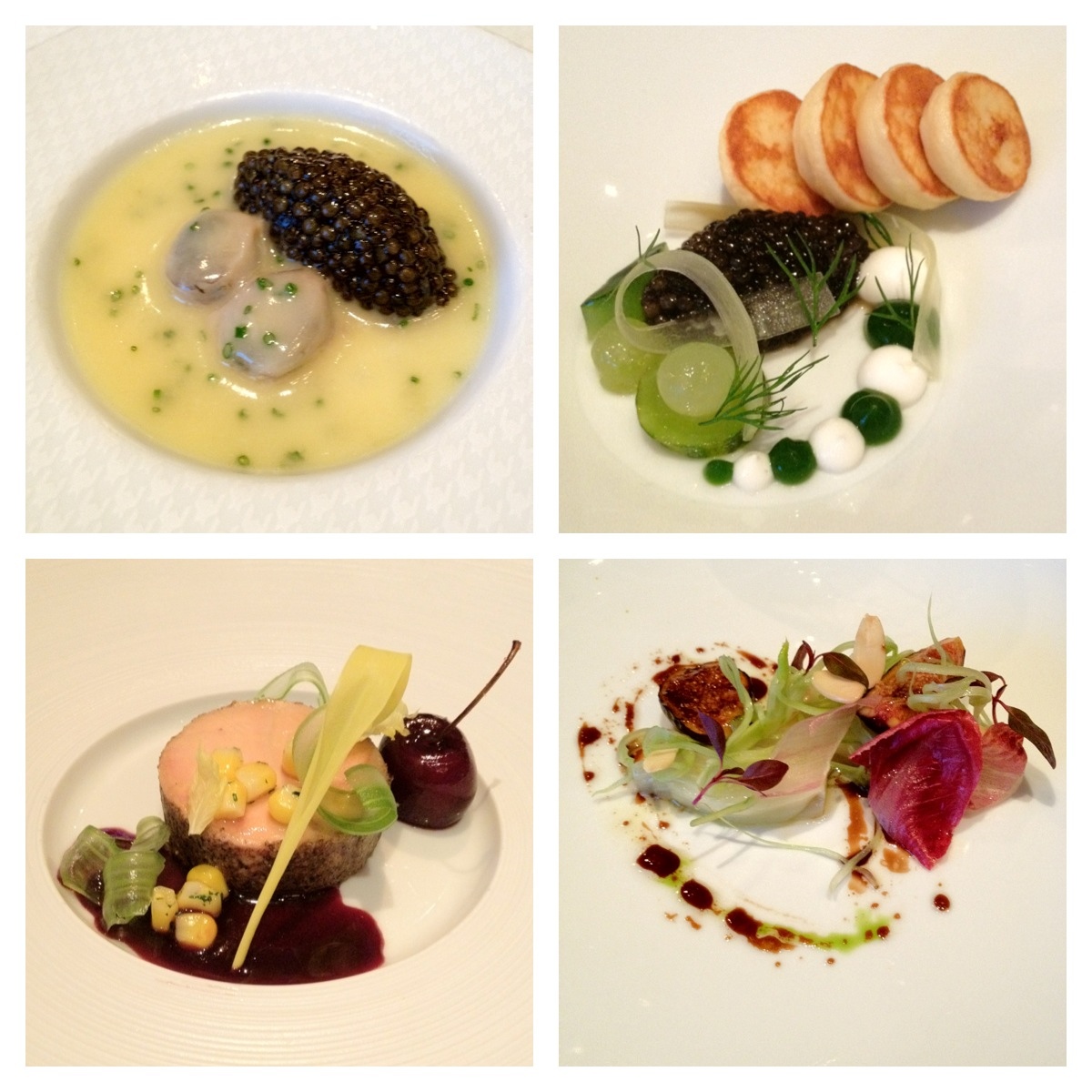 The main dishes inspired by Italian and French cuisines use mainly local but also some European ingredients. The Mediterranean Turbot served with soft Celery Root “Porridge”, Chestnut Confit, Brown Chicken Jus and Black Winter Truffles was tender in a delicate blend with rich wintery ingredients.
Butter Poached Lobster from Nova Scotia served with moon-shaped toasted bread pudding, caramelised cipollini onions, crunchy Piedmont hazelnuts, pumpkin “Parisienne” and a fig-chocolate emulsion, was an international conference of resources and ideas. As if the American lobster convened peacefully with the Turkish-British alliance on how to deal with the Italian and French gastronomic dominance in our restaurants. The fig-chocolate emulsion solved the issue by balancing the global powers on the plate as it changed the overall character of the dish so none of the national interests dominated at least on this plate.
The “Carnaroli Risotto Biologioco” is an organic risotto shaved over generously and not cheaply with the black winter truffle.

Dessert Tasting Menu at the Salon are five mini-desserts, but you can order à la carte. The Cheese Course is served with tasty amenities, but I went for the chef’s speciality Jaffa Cake. A vanilla Génoise, blood orange “Pâte de Fruits“, the locally made Mast Brothers chocolate ganache and a jasmine ice cream, was superb in its complexity.
An iPad wine list enables expanding or changing the wine selection with a slip of a finger so the sommelier has a complete and immediate control over it. Well-organised and practical, but if you do not know wine and the wine-producing regions well then your first moment of excitement may fizz out in a few seconds. If you are lost in the wonder ‘wineland’, ask the sommelier for recommendations fitting your budget. There are wines under $100 per bottle so realistic even for the occasional splurge.
Very expensive: Two daily changing nine-course Chef’s or Vegetable Tasting menus, each $295; five-course lunch menu $185. The Salon menu à la carte starts at $30 per plate so you can dine at Per Se just under $100 per head without wine. Salon is the bar area just after entering Per Se.
Mon-Thurs: 5:30–10:00 pm; Fri, Sat & Sun:11:30 am – 1:30 pm, 5:30–10:00 pm
Time Warner Center, 4th fl., 10 Columbus Circle, New York
+1 212 823 9335