Blanc's philosophy combined with his accent on seasonal ingredients and by nature-inspired innovation of the French nouveau cuisine at his gastronomic restaurant was rewarded with three Michelin stars and kept them for over thirty years!

The three Michelin chef Georges Blanc is devoted to tradition as he believes that diners appreciate the loyalty to one’s culinary roots. Looking at countless successful Italian trattorias lead by families sticking to old recipes, appreciated by many customers eating at these often basic places, one must agree that experience tried by generations works. The service at Georges Blanc in Vonnas goes a bit further than a casual mamma’s trattoria and the food is also more pompous. 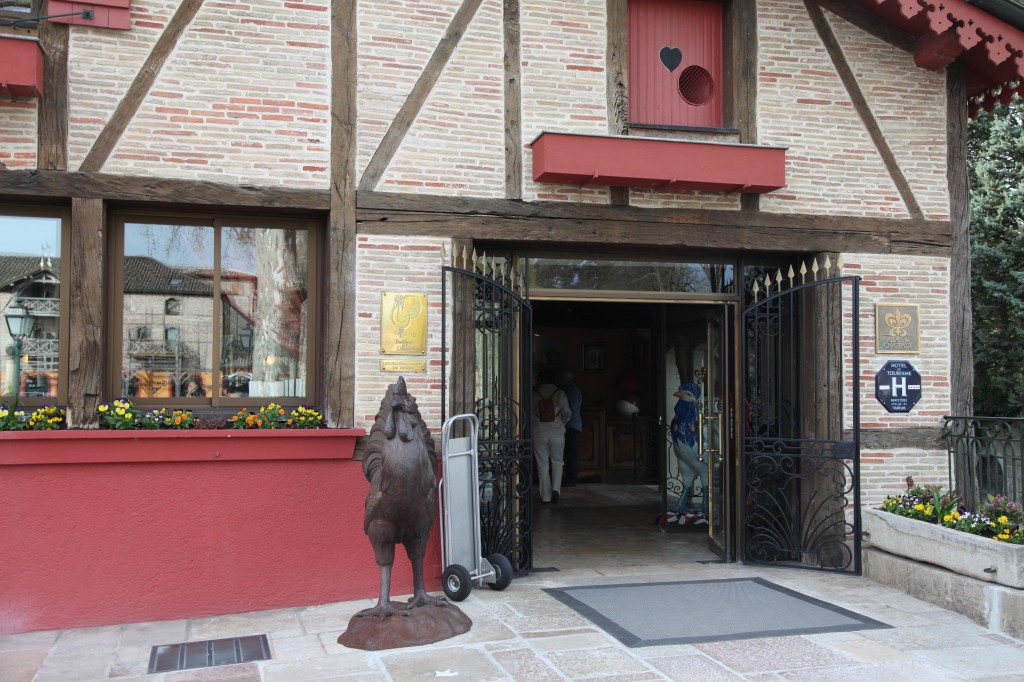 Blanc’s philosophy combined with his accent on seasonal ingredients and by nature-inspired innovation of the French nouveau cuisine at his gastronomic restaurant was rewarded with three Michelin stars and kept them for over thirty years! No wonder that Blanc is one of the most respected chefs in France. 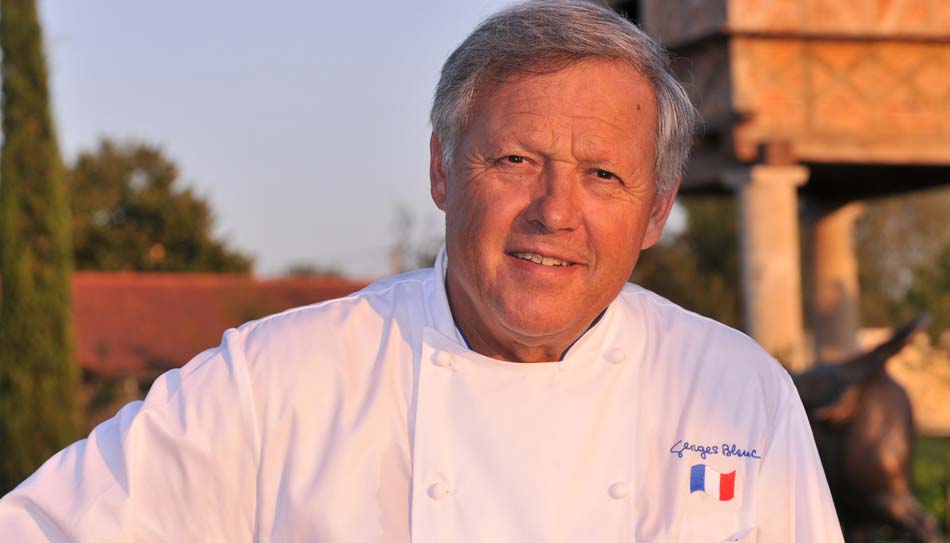 The uncrowned king of  Vonnas, a small town south of Burgundy, the chef Georges Blanc is a man who wanted to be a pilot when he was boy, yet his mother’s cuisine and culinary education lead to a very different career. He might still though bring many of his clients to the sky of tasty pleasures with his cooking.
He cooks his mother’s recipe for the famous chicken exactly as she did almost half a century ago. Intriguing is the fact that instead of flying to foreign countries, he stayed at home and does not sow restaurants bearing his name all over the world as many of his star-colleagues do. In an interview I asked him why, and he confessed: “A gourmet restaurant signed by a Grand Chef requires his permanent presence and an ongoing commitment. Beyond the quality of the plate, he has to make something happen. This little extra something only happens thanks to his physical presence and the intangible marriage of the atmosphere with his guests.” I cannot more agree with him. Blanc now is involved with a number of restaurants around France, all bearing his spirit and so their are grouped as “L’Espirit Blanc“. 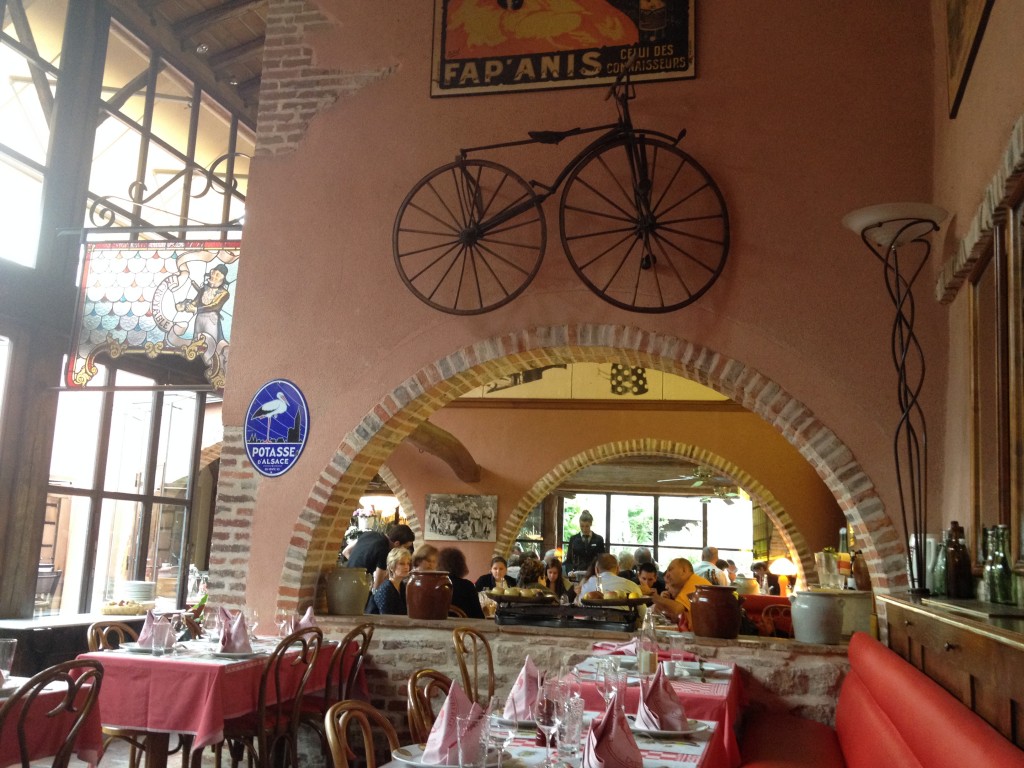 His bow to tradition and his culinary heritage is keeping a more affordable casual brasserie alongside his high-end restaurant in Vonnas. At both the Bresse chicken – with its own AOC (Appelacion d’Origine Controlle) can be ordered, so one doesn’t need to endure the lengthy procedures that are attached to a three-star restaurant. The Bresse chickens are free range and raised on natural herbal feed. 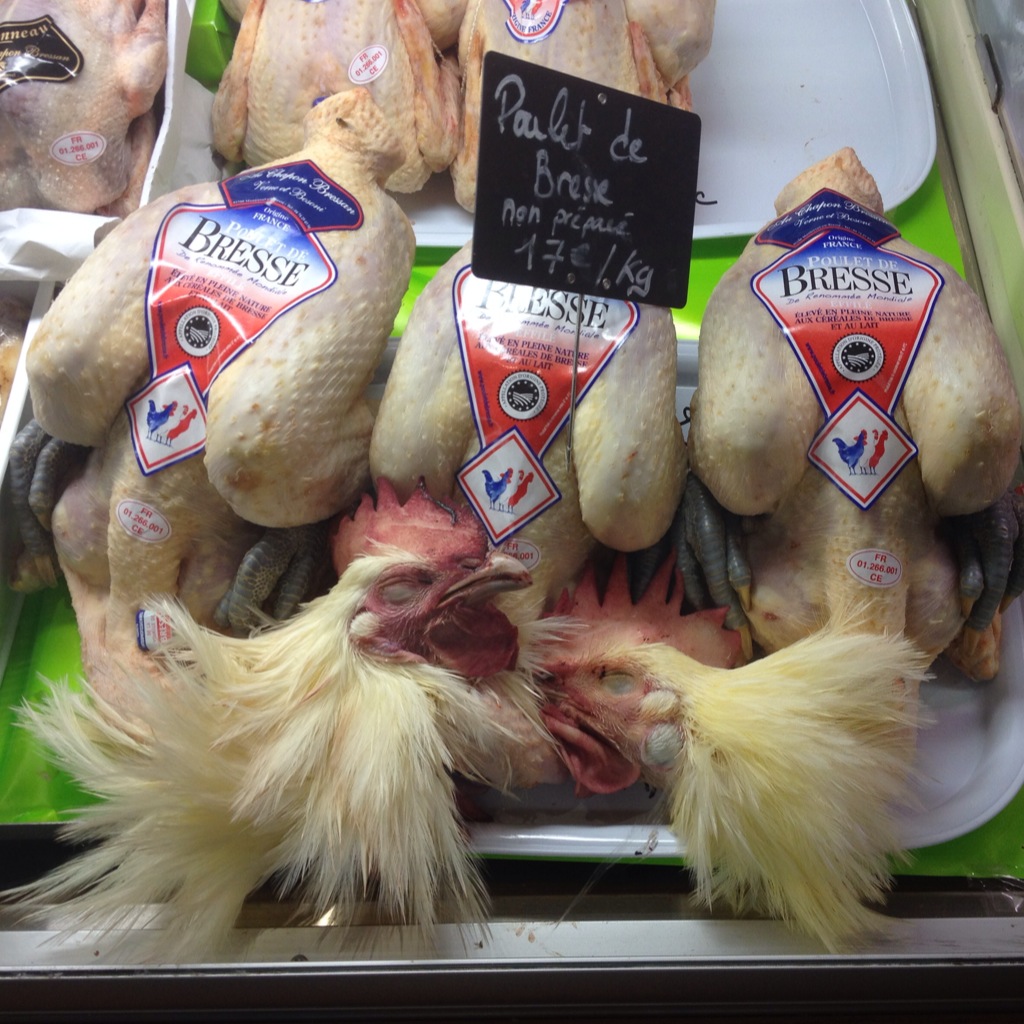 The chef’s preferred dishes are simple. He enjoys whatever is in season – the grilled chicken from Bresse with mashed potatoes and lobster from Brittany are his favourites. At his casual brasserie I always relish the succulent Frogs’ legs (grenouilles in French) that are combined with a rich butter sauce and a generous sprinkle of herbs bursting with natural flavours. 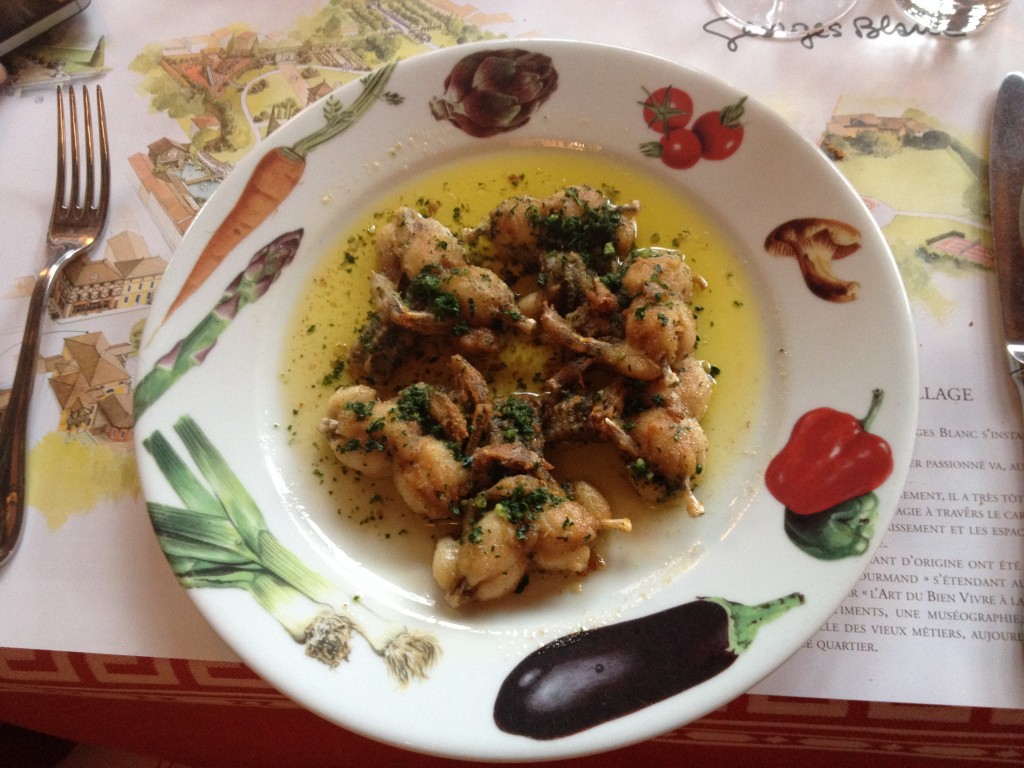 His gastronomic restaurant and a cosy Relais Châteaux hotel in the same building allow traveling foodies a safe trip, since there is no need to drive anywhere after consuming wine generously. The village concept was born over 40 years ago to reflect the French “l’art de vivre” [the art of living] in its exquisite gastronomy, combined with a healthy lifestyle as a spa, swimming pool and rural environment surrounding the premises. You can also buy the fresh chickens alongside pastry, chocolate, jams, and other delicacies at the gourmet parlour next to the brasserie. With all these options, Vonnas under his patronage became a heaven for food aficionados coming here from all corners of the world and the flow of hungry tourists never stops. 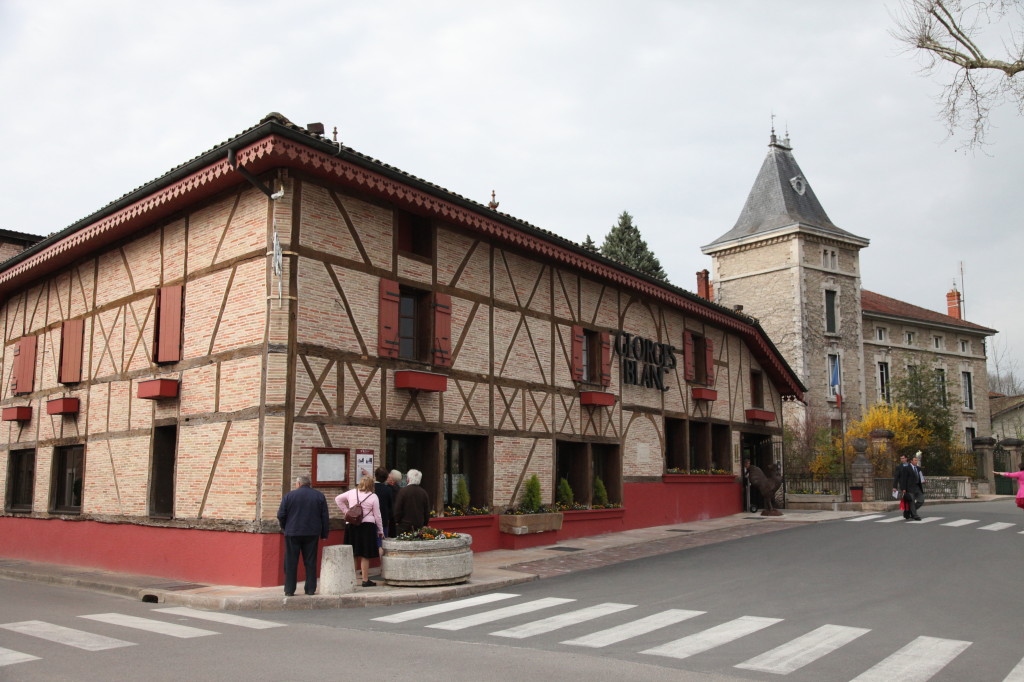 A perfectly tended vegetable and herbs garden supplies both of his kitchens. The recent hype of molecular cuisine was never appealing to the chef, who relishes in “rational creating“. It is a cuisine that comes first and then it can possibly surprise. So, no tricks, explosive or evaporating sauces or other gimmicks suiting a magician’s show, not a chef endeavour in the kitchen. 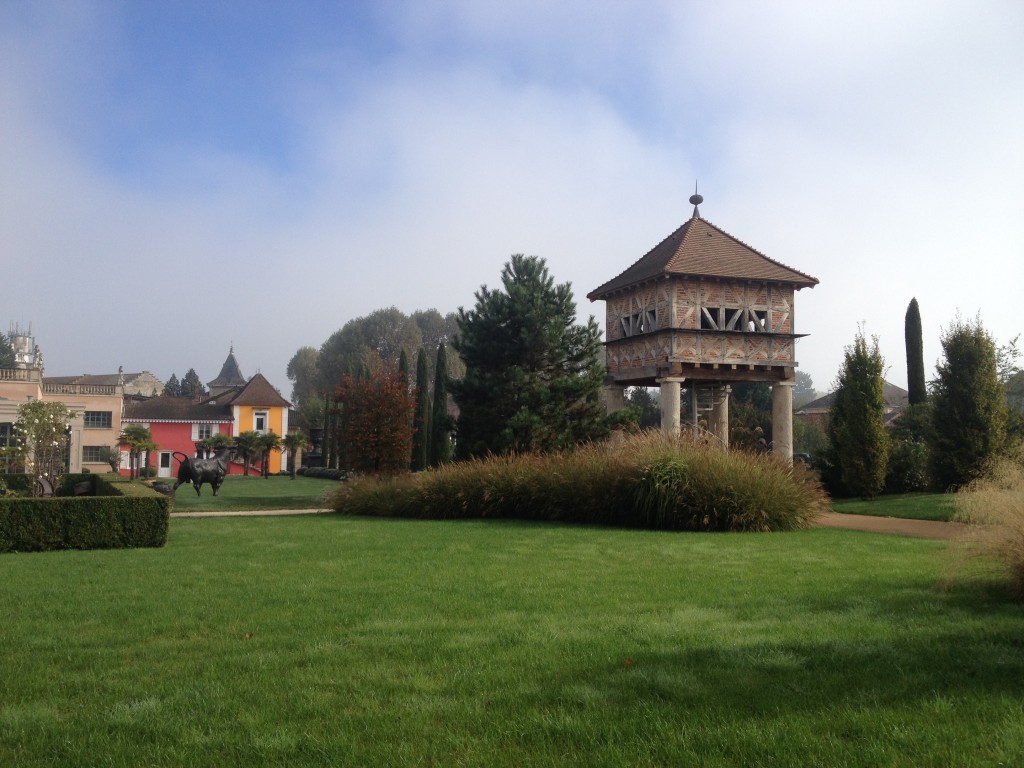 Food and wine go together in France. The chef Georges Blanc owns a vineyard in Burgundy and his wines are also available at all of his restaurants. They make for an excellent aperitif at the bar before the dinner. Himself, he loves Chardonnay and calls it “the king of  white grapes“. Blanc like most well-known chefs is also an author of many culinary books, from which the most acclaimed “La nature dans l’assiette” [Nature on the plate] has been translated into five languages and became a point of reference for many aspiring as well as established chefs.