Only a block stroll from the iconic Taj Mahal hotel and the colonial past evoking Gate of India, nestles a trendy hotspot for the Bollywood celebrities and idols seeking crowd. Indigo has been attracting the innovation driven and internationally themed food zealots living, traveling or simply passing through Mumbai in the past 15 years. Its success is supported by three pillars of attraction. 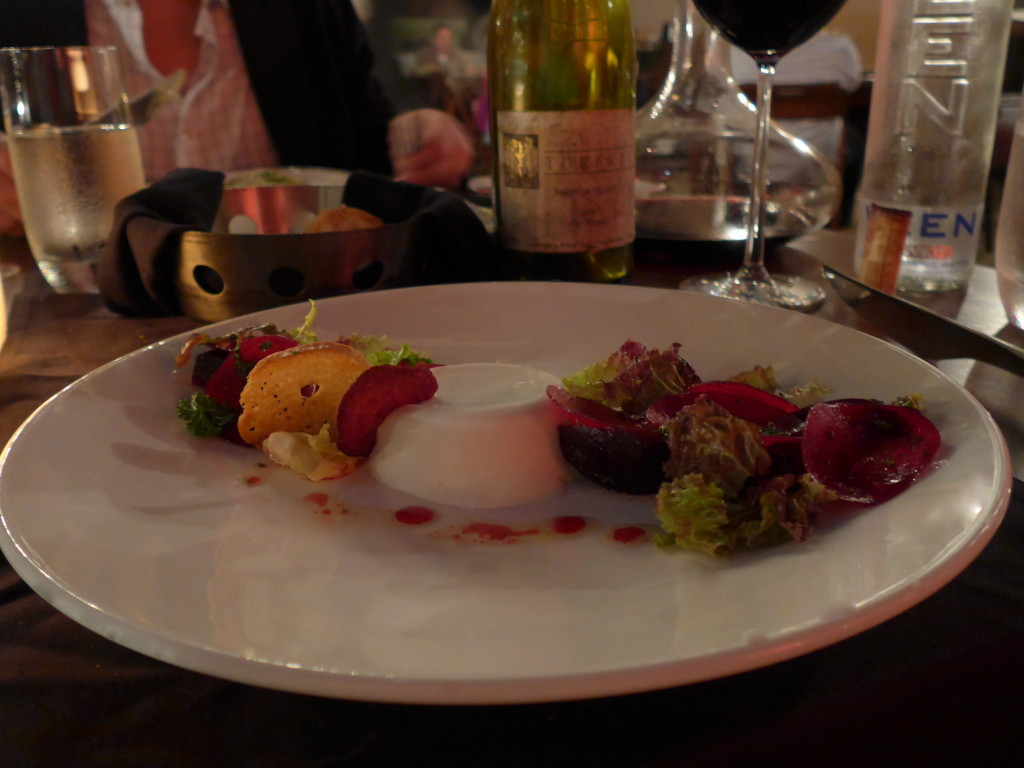 First, you can trust its high quality ingredients and carefully guarded hygienic preparation, which in India can save you an unpleasant fight with a food or water contaminated infection.
Second, the menu evolves constantly. The chefs’ thrill for new lavish marriages between worldly ingredients and western cooking techniques never bores the regular diners. I was impressed by the delightful first course of Baby Beets tossed with lettuce leafs, herbs and bread crisps, that was curiously paired with a jelly-textured horseradish pana cotta. The milky texture of the savoury pana cotta seasoned with pungent horseradish was an unexpected turn in the meal. Rather uncommon blend, yet with the chef’s sensitive touch the result tasted wonderfully.
There are many more surprising culinary concoctions such as the Pressed Watermelon Chilli Vodka (yes in your food) with Whipped Feta, Fennel and Pumpkin Seeds or French Farm Foie Gras Terrine Pickled Rhubarb, Rhubarb Soup, Fruit Nut Brioche. Who would think of serving goose liver with a rhubarb soup? Certainly not a common foodie like me. 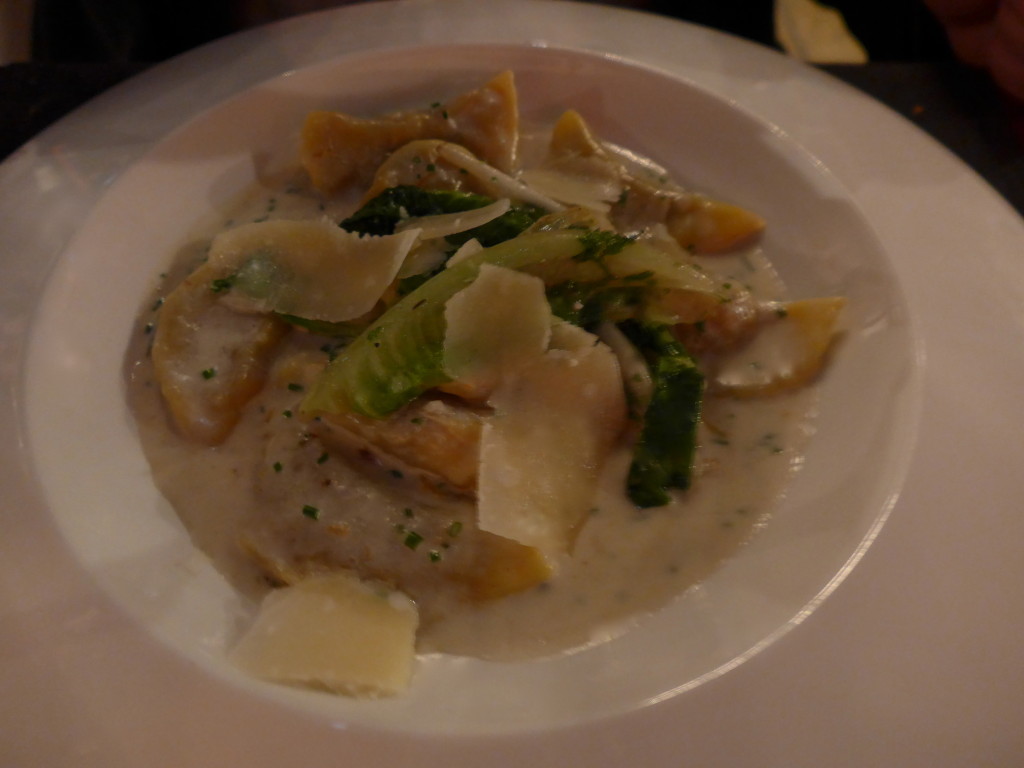 Rahul Akerkar, co-owner and chef, spent many years in New York, where, while earning a master’s degree in  biochemical engineering from Columbia University, he was making money at various restaurant kitchens. This taste driven American experience drew him into the western culinary world. His international magic is stamping the entire menu.
These second courses give you a glimpse into the chef’s gastronomic soul bringing Italy together with Canada or Austria in one dish:
Pumpkin & Goat Cheese Tortellini Carrot Ginger Puree, Spiced Pecan
Chilean Sea Bass In Cardamom Tomato Minestrone Blue Mussels, Squid Ink Spaetzle – doughy spaetzle with mussels and fish? It cannot get more unconventional. 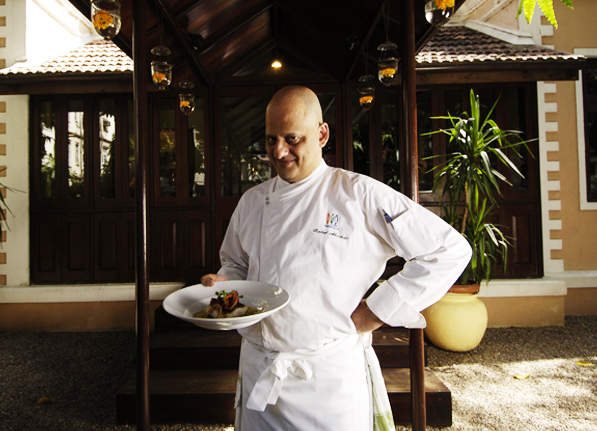 In an interview for Huffington Post’s Perry Garfinkel the chef explained the reasons for his admiration of Western cuisine: “Subtlety. Less truly can be more in the kitchen. Why cover up the real taste of fish or lamb or delicate greens? It’s a young chef’s insecurity that makes him or her try to do too much with a recipe.”
Although, the chef uses unheard of combinations, he still uses much less spices and sauces than a typical Indian food would have usually done.
His groundbreaking culinary zeal earned him recognition not just in India, but Indigo ranked 28 in the Asia’s top 50 restaurants awards by san Pellegrino and Aqua Panna.
Many vegetarian options such as the Seared Tofu With Tentsuyu Broth Vegetable Gyoza, Sweet Shitake and Daikon are a trip further to the east, unlike his previous more western directed dishes. The chef, like many of his professional cohorts, did not escape the global infatuation with Japanese ingredients.

The deserts do not lag behind. From freshly made homemade ice cream (many rather unusual flavours), through sizzling hot soufflé to heavenly chocolate treats the pastry chef remains in the same adventurous spirit as the savoury dishes.
I went for the Pineapple Upside Down Cake adorned with Charred Peppery Pineapple, Chili Caramel and a scoop of Rosemary Ice Cream. The cake burst into a full life with the spicy chili flare and aromatic herbal ice cream. 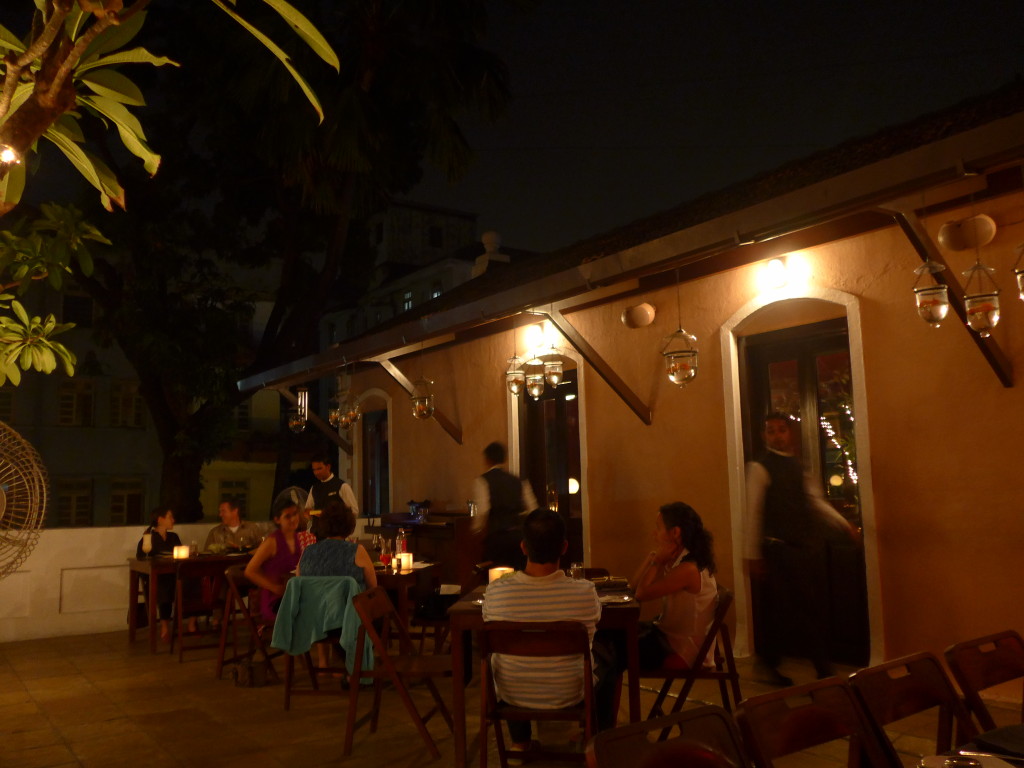 Indigo’s third pillar of success lies in its location and design. Heavy wood, simple lines and distinct glass lamps penetrate the entire structure creating a no-fuss yet homy environment. Housed in a historic wood beamed Victorian mansion it blends an aura of several climates. The upper outdoor terrace is adorned with exotic trees offering breezy freshness that is multiplied by the whizz of swaying electric fans. It is only open for dinner during the more pleasant winter months.
The dining rooms (The Yellow Room on the ground level and bigger Main Room with a Shiva blue reflecting pool along one of its walls) are dedicated to pure food pleasure. While entering through a long bar hall lined up with tall bar stools on one hand and straw meshed lounge chairs celebrates social merriment. The Burgundy room is the scene for wine dinners and private dining functions. The choice of ambiances is abundant. 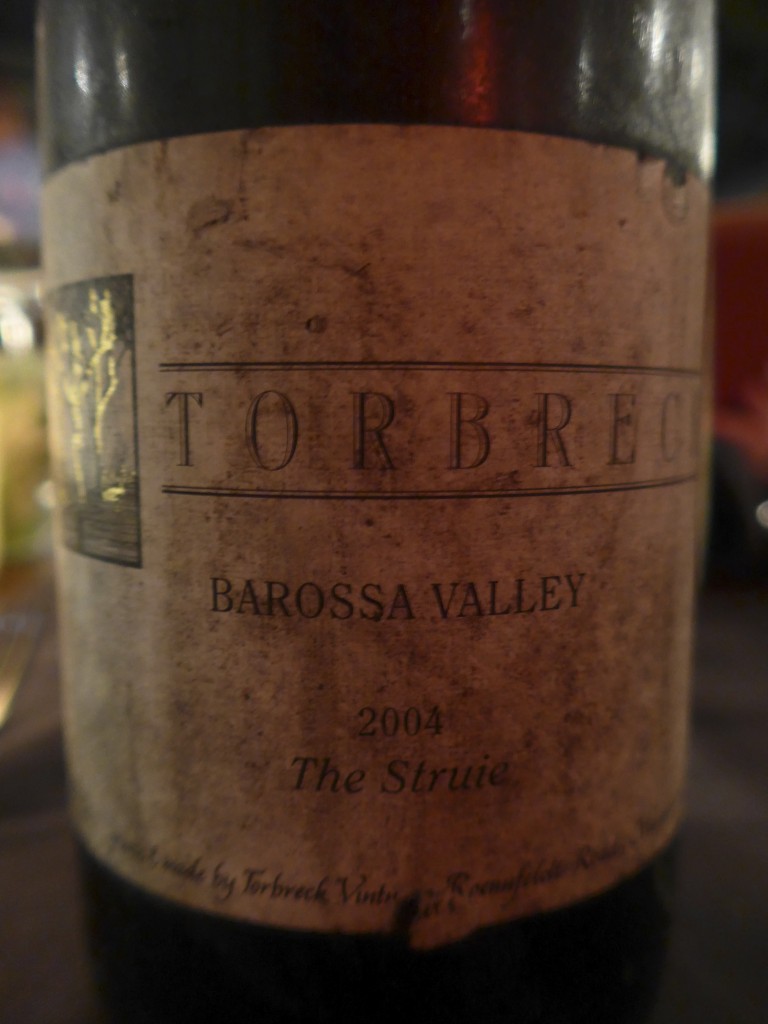 Drinks: The wine list with a broad-reaching international selection including Indian wines by the glass and bottle was awarded with the “Award of Excellence” by Wine Spectator from 2001 to 2010. In India proper storage, temperature control as well as correct serving temperature of wines are a common problem. Our bottle of the Australian red beauty Torbreck was in a perfect condition. From Barossa Valley, the almost 10 years old wine held up very well. Still powerful, yet more smooth after the substantial ageing process. The sommelier was enthusiastic, yet his expert wine knowledge was not up to the standards I would expect from a Wine Spectator awarded establishment.
Opening hours: Daily for lunch: 12noon – 4:00 pm; Dinner 7:00 pm – 1:00 am.
Address: 4,Mandlik Road,Near Taj Mahal Hotel,Colaba,Mumbai.
Contact: Tel: +(91) 22 6636 8980