Roberta Sudbrack is one the most established and lauded chefs in Brazil. She authored a number of culinary books, cooked for the former Brazilian head of state, his international guests and diplomats. Her food had to look representative, and it came naturally that her training is influenced predominantly by French cuisine. 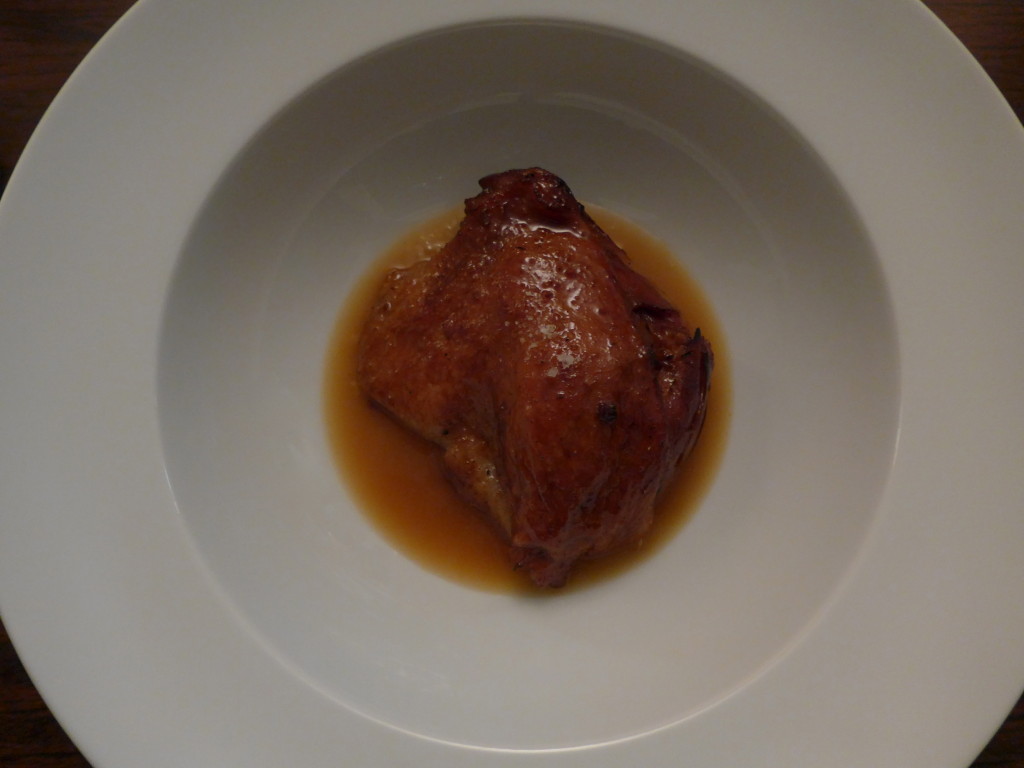 Whether it was for the national pride or to differentiate herself from the copious high-ranking European chefs or these adding anything sounding japanese to their menu in a grip with the international culinary trends, Sudbrack is not afraid to use local ingredients.
The result is a haughty, but simple as well as creative cuisine highlighting Brazilian ingredients. Her bistro style restaurant has been noted as one of the finest in Rio de Janeiro. 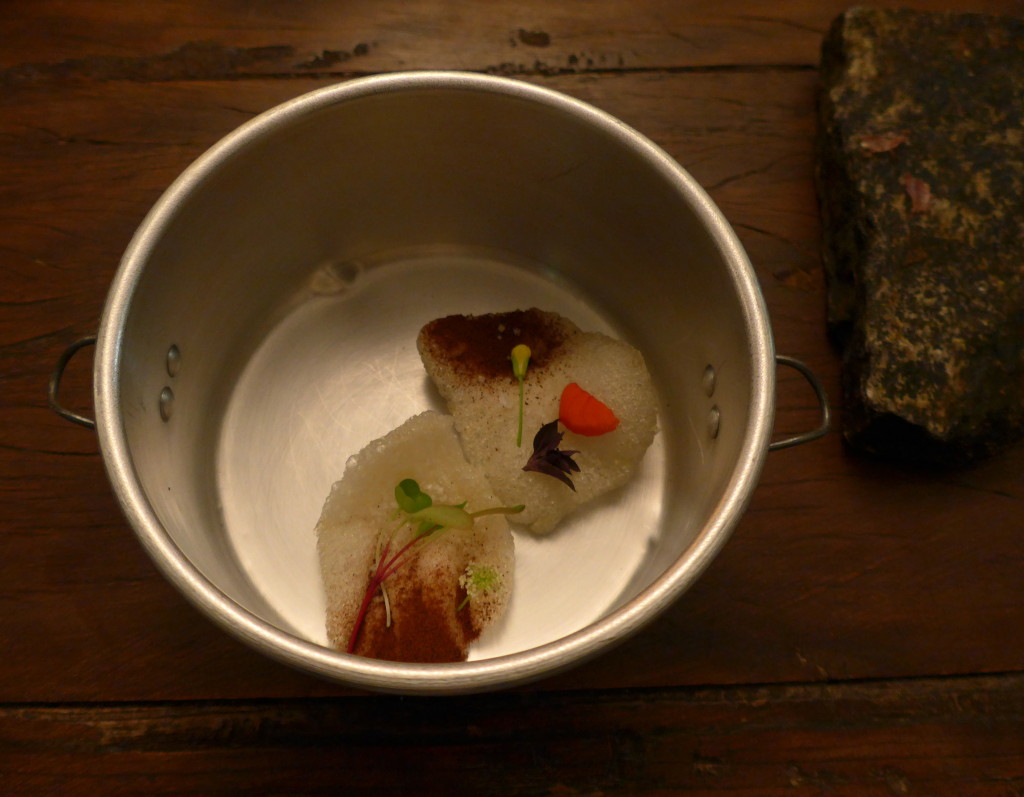 In a daily changing set menu you can stretch to eight courses, some tiny, some in the size of a whole guinea fowl.
Starting with a quartet of amouse-bouches, the chef’s sense for discovery and doing things her way pops out from a casserole, strikes you with snappy and perhaps awkward titles like in “Raws: sea, dirt, orchard” and surprises with unusual brazilian ingredients like in “Crayfish, canjica, caviar“. Canjica is a white Brazilian corn popularly used in a festive sweet milky corn porridge of the same name. 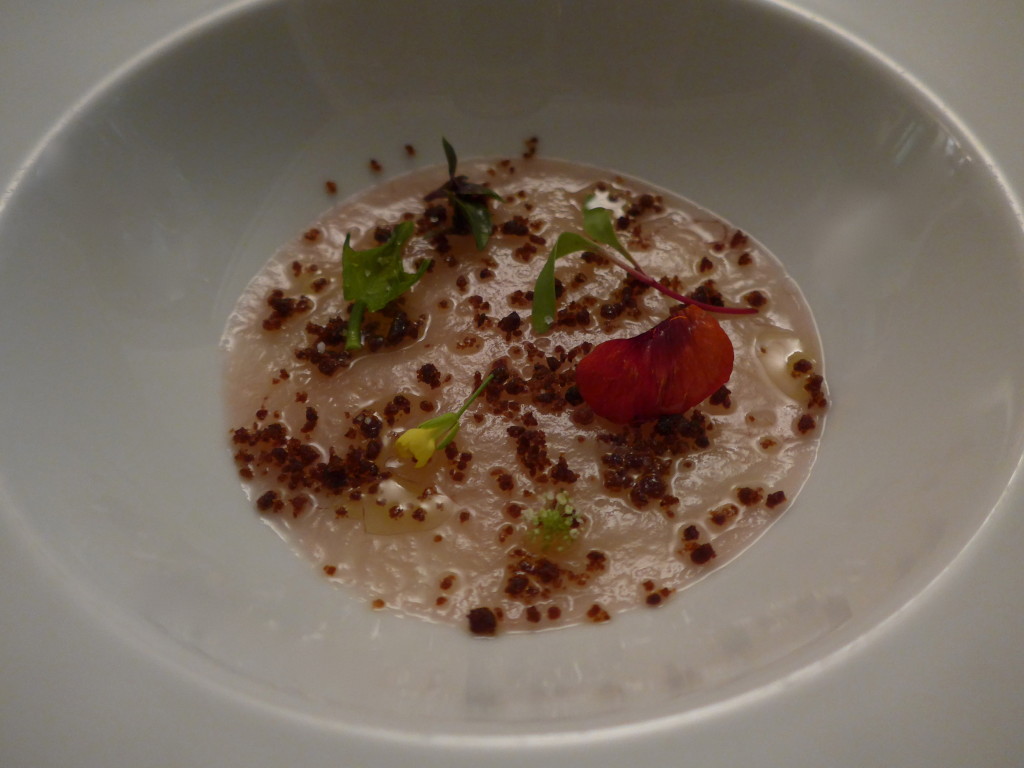 The weirdest sounding and looking though was the “Corn skin, fig seeds and foie gras“. It did not taste bad, just I am not craving it as I am writing this review. These small apetizers were all nice and creative as was the fourth unusual plate of “White asparagus bouillon on red tuna leaf“, yet they did not blew my palate with sensual and addictive taste profiles. I would not dare calling them boring, just not out of this world if you are used to dining in these kind of restaurants as I do. 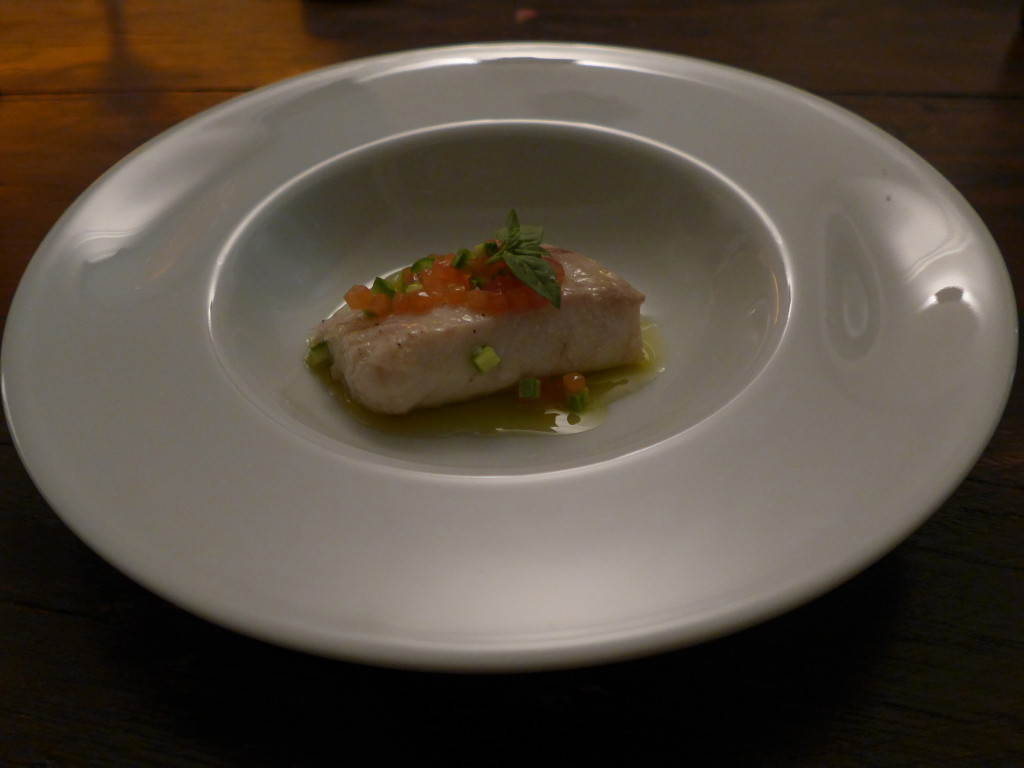 Three main  courses follow the suite. A Mediterranean style Red snapper poached in olive oil was elevated by a high quality pea coloured olive oil in which the fish was bathing itself, but since I live in Mediterranean I was not overwhelmed by the fish itself. Using local pirarucu or other fish found along the stretchy brazilian coast would flatter my palate more. 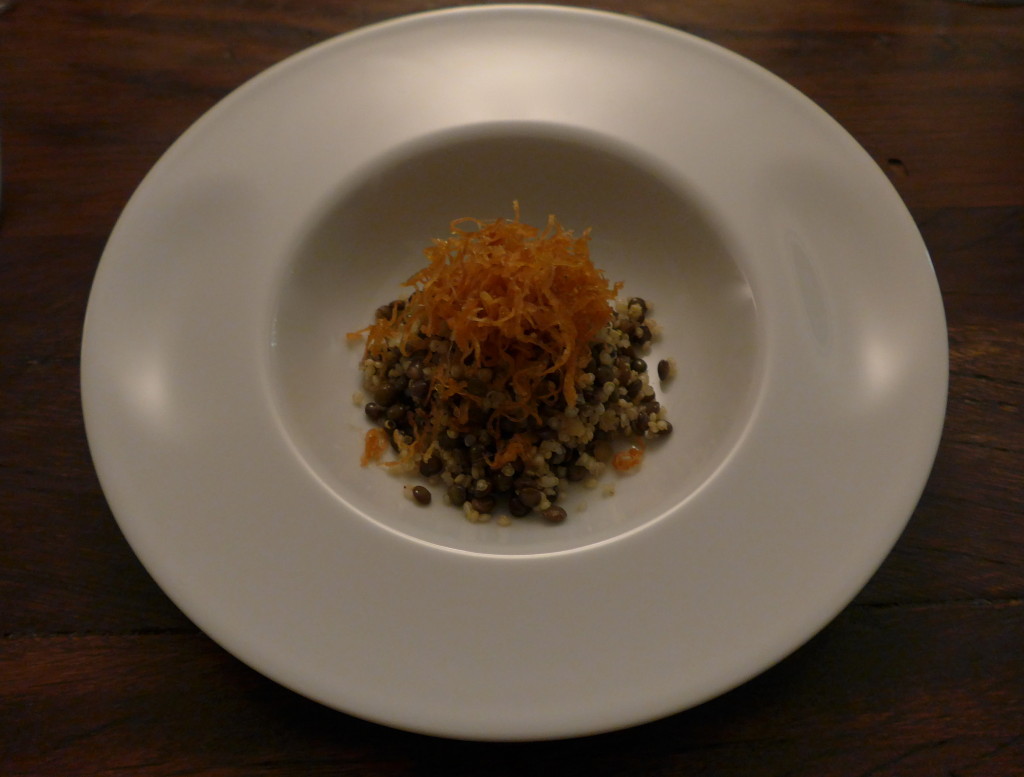 I was not in a mood for pork ribs (from the Minas Gerais state) and the chef happily substituted it for Roasted guinea fowl. Nested in my plate, the shiny bird looked like a dish from a Medieval feast. An unlucky choice for the chef, since for this bird to be appealing to me I would need it roasted, stuffed and served with rich side dish and not just a juice. Poor bird, I could not fully appreciate its by high temperature sealed fate.
The kitchen was accommodating my whims coming with a vegetarian option of Quinoa, lentils and shaved sweet potatoes. It was fresh, grainy, but very boring, so I dove half way through and expected next dish to excite my taste buds. This two times improvised course just did not work for me. 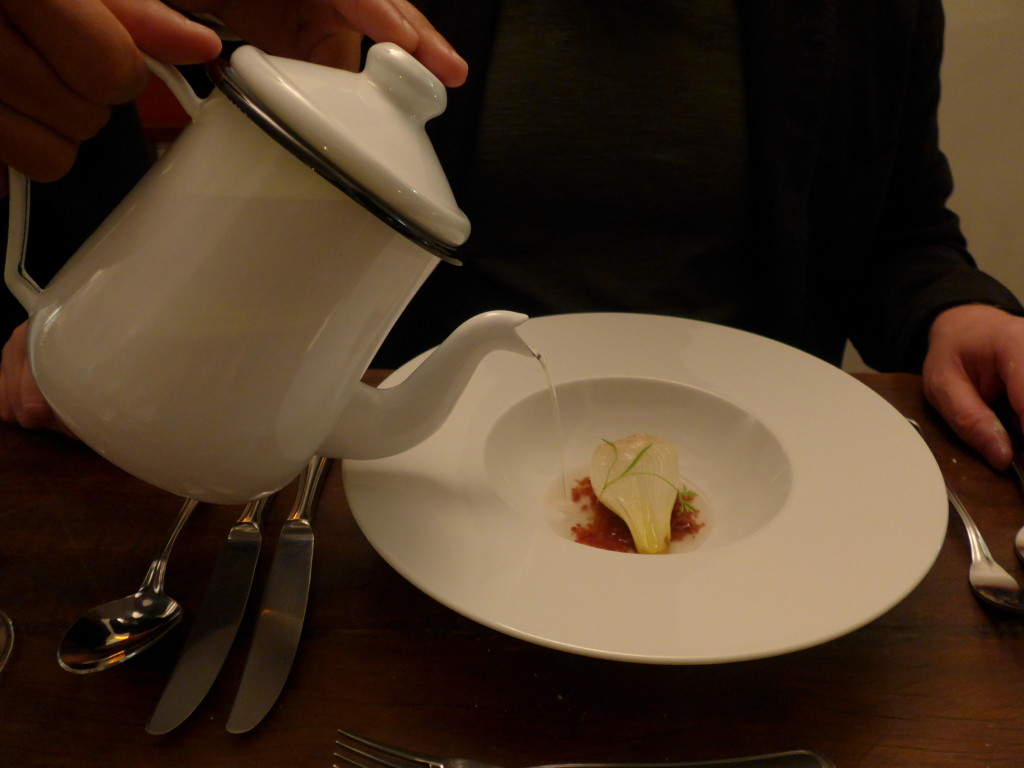 Then came a plate of Roasted sweet onion, bouillon of jamón and sausage. The bouillon was served from a tea pot, poured in a slow pace over a half cut white onion and chopped red brick hued ham. This was a favourite dish of my partner and had more depth than all the other mains. 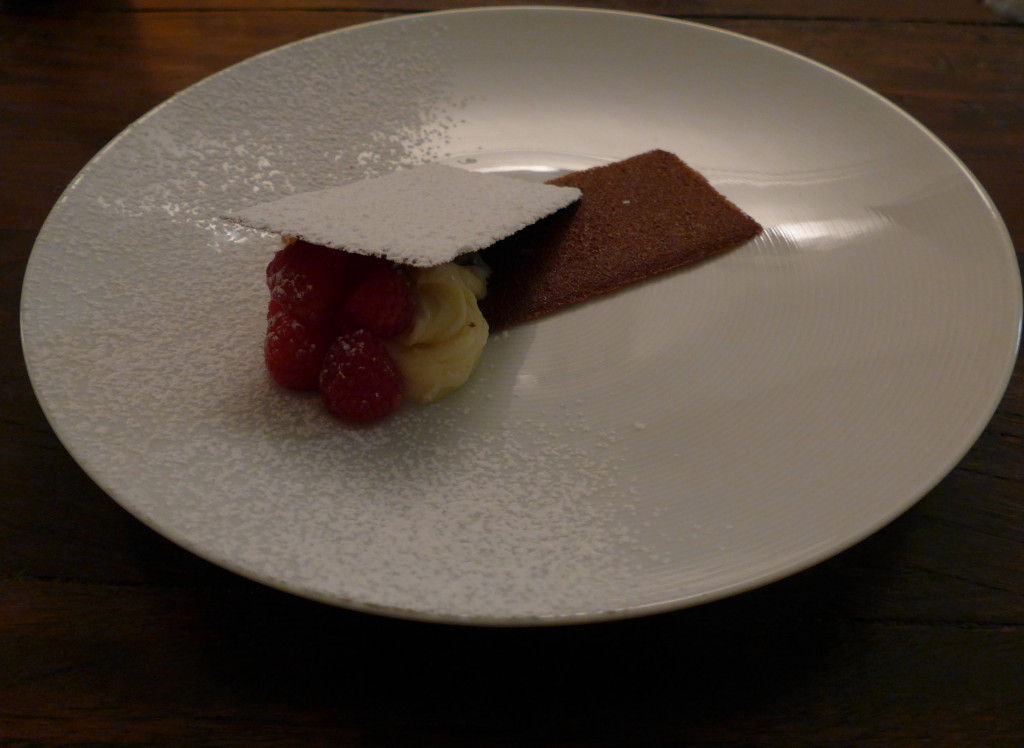 A small slice of local cheese with toasted bread followed and left us wondering whether the bread would not be better with a slab of butter. The cheese was rather awkward and assumed an acquired taste.
A light desert of “Macerated Peach, tea, quinoa praline” refreshed our tired palates ready to bite into a trio of sweet pleasures of “Small sweets of Rapadura skin, acidified white chocolate, raspberry and licuri“. It sounded more fun than tasted, but my sugar receptors were stimulated enough. 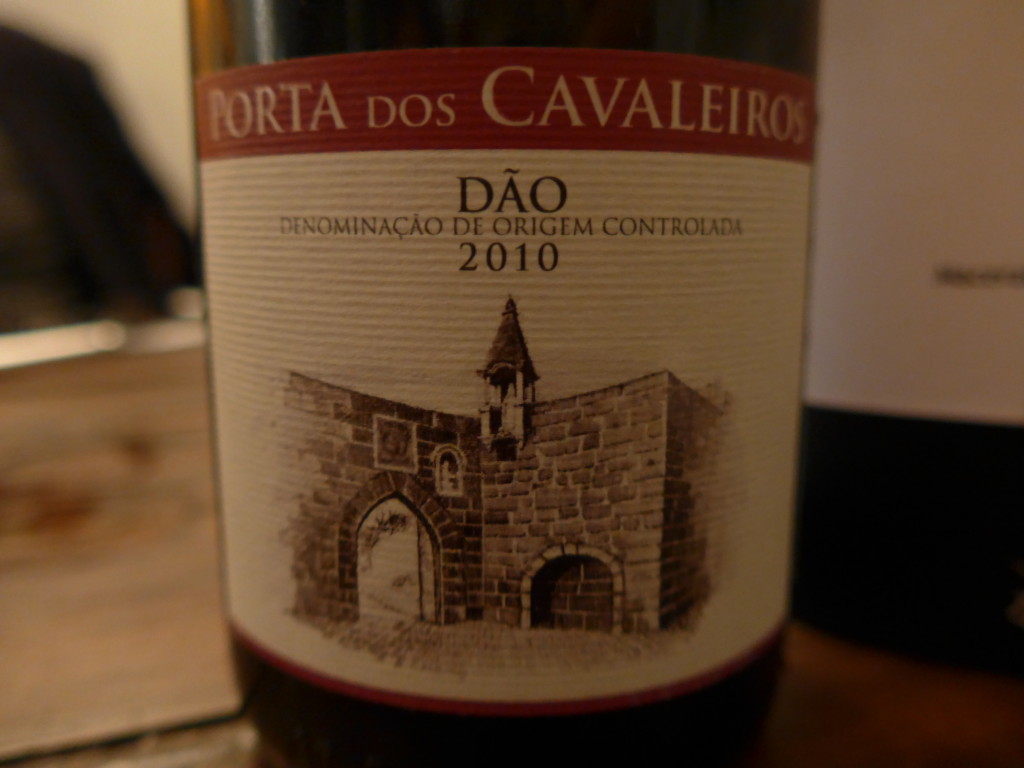 Drinks: From more humble portuguese wines to the grande dame of Spanish wines – Vega Sicilia Unico – the selection was focused on spanish speaking wine producing countries. Staring with a bottle of red wine from the DAO region in Portugal we were overwhelmed by its boldness and had to switch into something more elegant and refined. The Vega Sicilia Unico 2006 saved our evening. It was exquisite as always. The only drawback is its price, but our trust in the in-house sommelier vanished after the first supposedly elegant and soft debacle that like a gunpowder blew our taste buds, so we went for a secure bet of the best producer on the list.
The beer list is refreshing and pleases all the football fans coming to Rio for the World Cup with its thirst clinching quality. After shouting all day on the stadium, supporting your team, you might need beer instead of mouth drying wine. 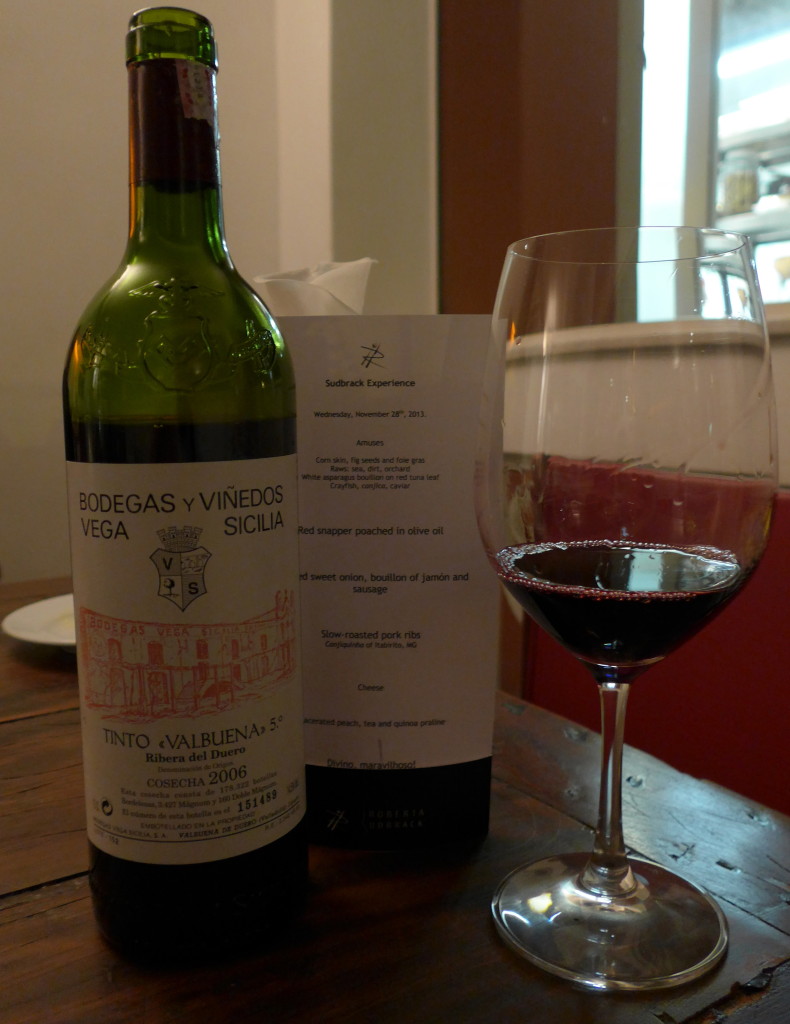 Ambience: Modern, austere and rather soulless. Surprisingly there were only two tables upstairs occupied by diners in the middle of the week, which for most highly rated restaurants is rather unusual. The answer might be the location (near the botanic gardens, far from the beach and many hotels) and the lack of character of the interiors as many cariocas (Rio natives) have told me. On the other hand the ground floor of her two-storey gastro house was full. I would rather require siting there if I came in the future. 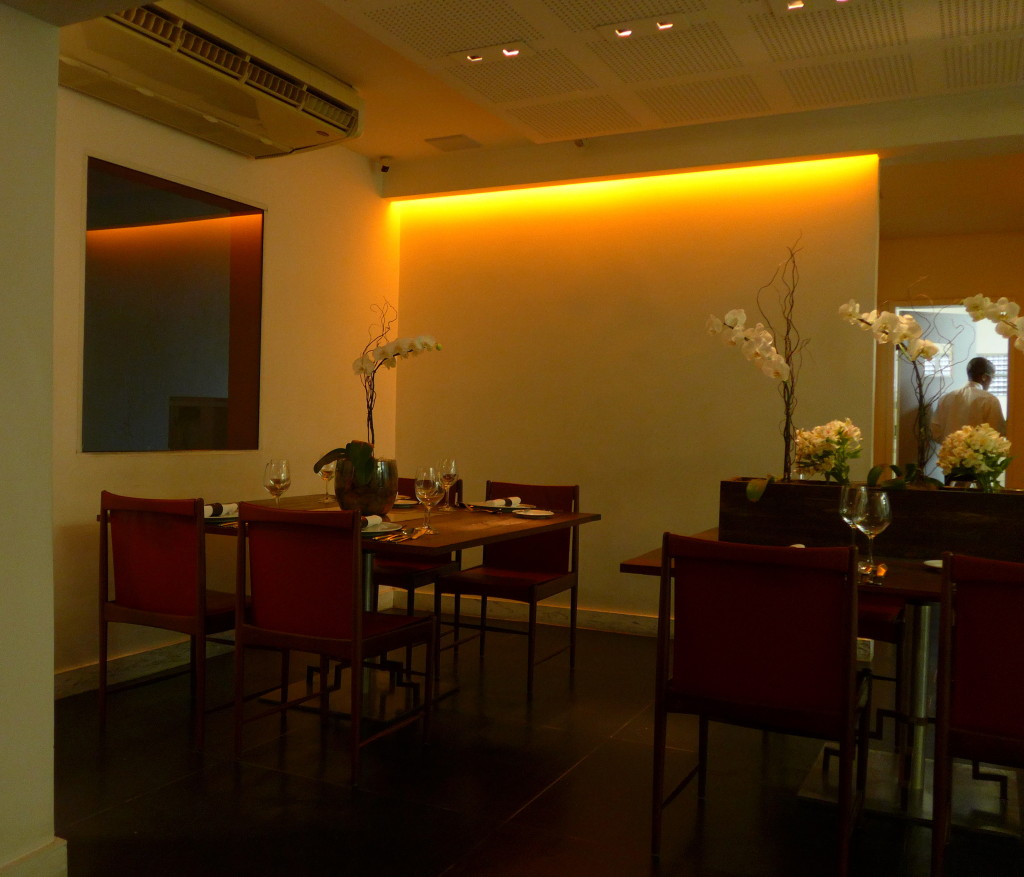 For such a reputable gastronomic restaurant it feels perhaps too casual and rather uncomfortable as an ugly air conditioning sticks out of the walls and the windows do not offer much of a view. The fact that Sudbrack cooked for the left-wing president might be the answer to her rather humble decor.
Opening Hours: Closed on Mon, Wed and Fri. The rest of the week open for lunch and dinner (Sat & Sun closing at midnight).
Address: Avenida Lineu de Paula Machado, 916 – Jardim Botânico, RJ, Brazil
Contact: +(55) 21 3874-0139