Alan Wong is undoubtedly the most iconic chef in modern Hawaii and one of the first gastronomic figures known for blending local ingredients with ethnic, mostly Asian, flavours. Born in Tokyo, and rised in Hawaii, the former pineapple plantation worker discovered his passion for cooking only later. Since then he went on to become the leader of the food revolution in the sunny ‘Aloha State’. 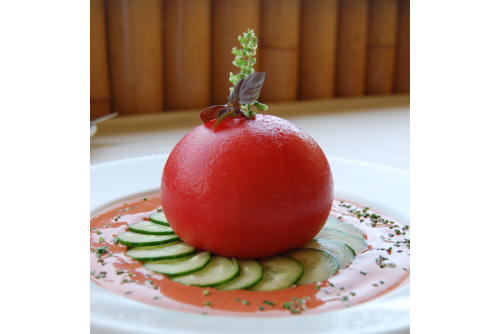 Gathering a valuable experience in French cooking techniques at New York’s Lutece stirred his creative spirit, yet his love for the land and farming was strong enough to become one of the pillars for his locally-sourced innovative dishes in the early 1990s. His quest to showcase Hawaii’s produce at its best won him the James Beard award for ‘Best Chef:Pacific’ in 1996.

Although Alan Wong’s remains his biggest success, he opened a more casual Pineapple Room and recently a fusion – luxurious restaurant Amasia inside the sprawling Grand Wailea Resort. Amasia did not impress me, the food is only a blurred reflection in the mirror of his gorgeous original restaurant. As his award-winning Alan Wong’s will celebrate 20 years of fame I had to take a bite. 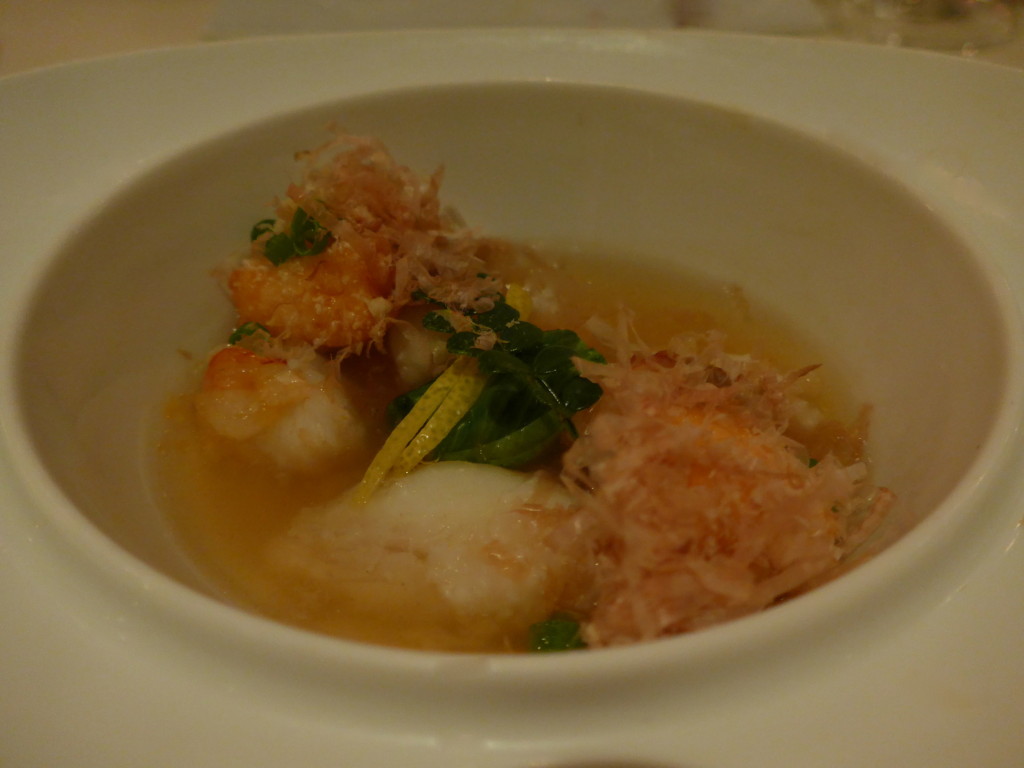 Tomato, one of his signature ingredients, shines in the Richard Ha’s Whole Tomato Salad served with Li Hing Ume Vinaigrette. It is pure, succulent and highlighted by the thick ume plum sauce. It was a perfectly refreshing start to our dinner as much as the “New Wave” Opihi Shooter, a narrow glass of local limpet fish in spicy tomato water with Fannel Basil Ume Shiso Essences.
On the opposite spectrum, although still very focused on local farmers’ produce is a Hawaii Island Goat Dairy & Naked Cow cheese platter, rather unusual to be found in appetisers, but Alan Wong does not intend to treat you to a common experience at his flagship restaurant. 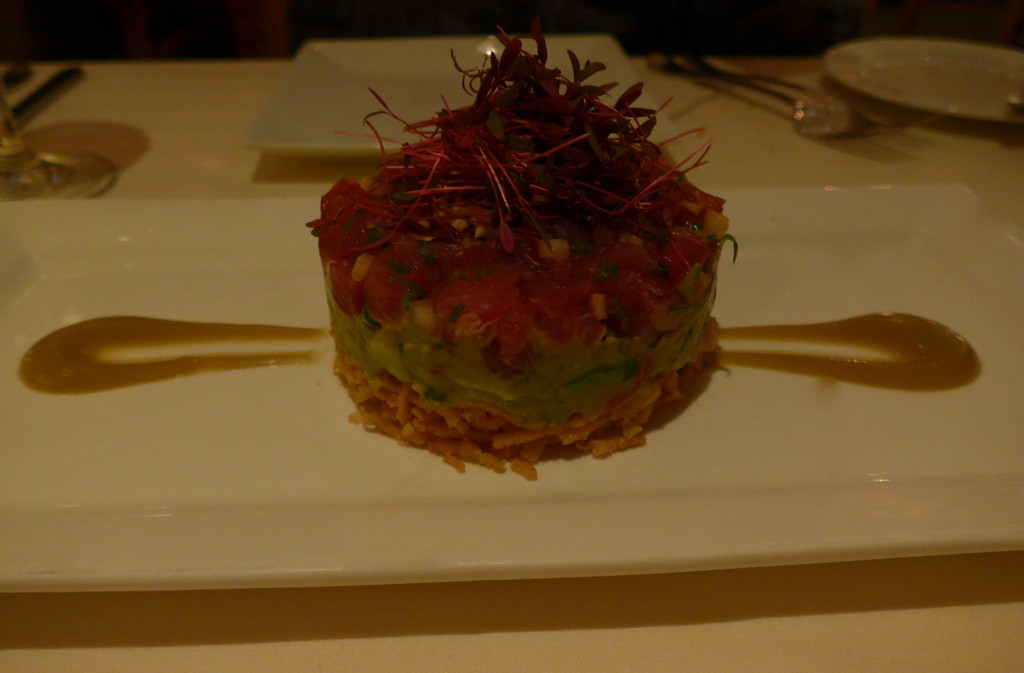 More trendy and contemporary is the Chopped Ahi Sashimi layered with Avocado Salsa atop of a Crispy Won Ton fried noodles. Seasoned with spicy aioli and wasabi soy sauce adding zest to the locally caught raw chunks of ahi tuna, this was my favourite Hawaii take on this locally adored fish.
For a warm entry, the Sino-Japanese creation of Lobster “Tofu” Agedashi made with local Kona lobster and crab meat, thickened by Japanese seaweed-based kudzu, is something between a generous Asian soup and a light stew. It is delicious accompanied by tea rather than wine or a cocktail because of its refined flavour profile of the delicate seafood. 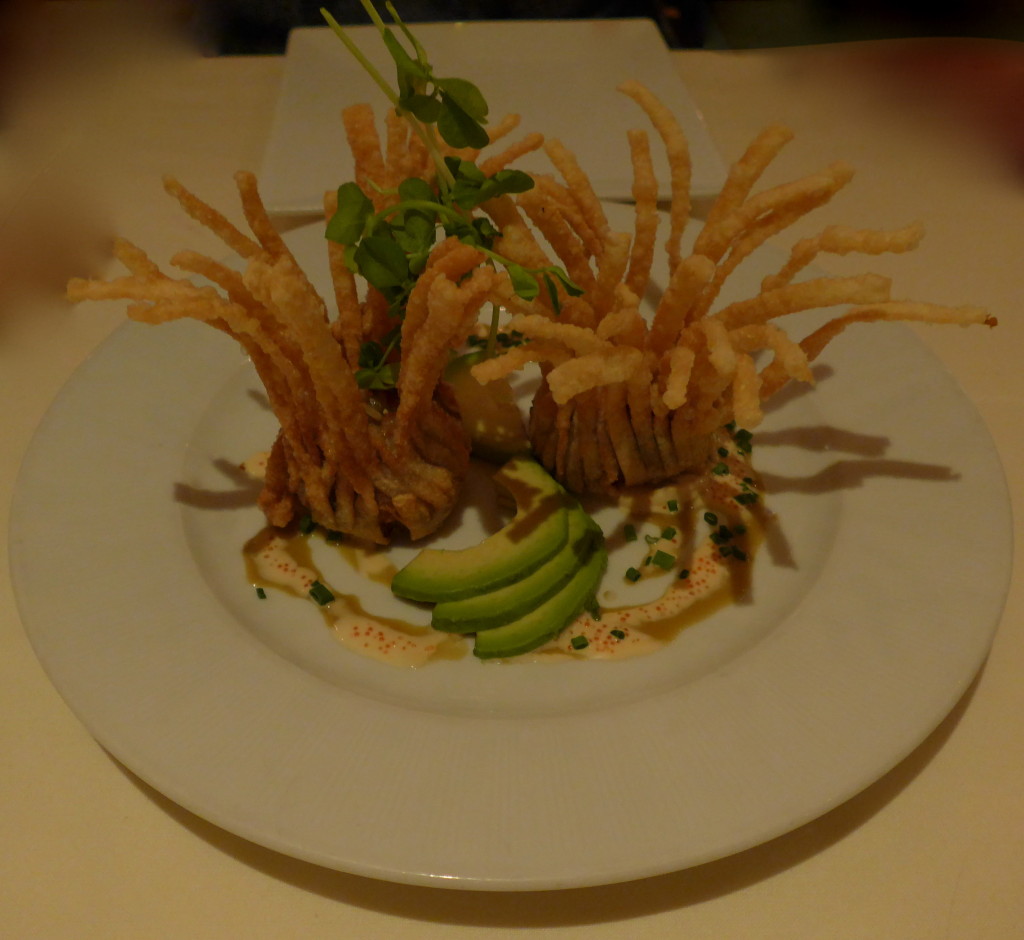 Funky, looking like a hairy rastafarian on a plate, were the fried “Poki-Pines”. The ‘hair’ were fried won tons sticking up from a head of ahi tuna poke. Poke is marinated raw tuna in sea salt, chilli, soy sauce, sesame oil, limi seaweed and candlenut from local kukui tree. They were more fun than refined, but enjoyable.
One of the most popular dishes are the Macadamia Nut-Coconut Crusted Lamb Chops. Generous omega-rich coating of the lamb chops in red wine jus called for some flavourful veggies so the Asian Ratatouille and Taro potato starch added the needed contrast. Local Goat Cheese unexpectedly served as a gratin with the lamb was a gamble worth taking.

The wine list is one of the best in Honolulu. Rich in US selections, we treated ourselves to the beautiful Ridge Montebello from the 2006 vintage. Not cheap, but rewarding with depth, length and elegance rarely seen California Cabernet blends. To close up the meal a flight of there sweet wines from the Old World including a tasting of four Madeiras from The Rare Wine Company Historic Series – Charleston Sercial, Savannah Verdelho, Boston Bual and New York Malmsey – make the drinks stick in your gustatory memory.

The desserts are made by a talented female pastry chef Michelle Karr-Ueoka, also inspired by the local fruits and dairy. The Chocolate Chip Ice Cream Sandwiches have an American flare with Hawaii twist of a local cocoa and caramelised bananas.
An impressive Hawaii produced coffee and tea selection including several rare coffee beans will impress not only tea-to-tellers but anyone interested in authentic Pacific coffee. 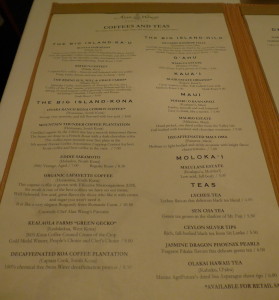 Despite everything else being excellent, I could not find my admiration for the salty awkward driedsea asparagus “tea” – Olakai Hawaii Tea (from Kahuku in Oahu). The brew was just too seaweedy for me as a warm beverage!
The restaurant’s location on the 3rd floor of an office building with no ocean view is controversial considering its island base in Hawaii. The atmosphere at Alan Wong’s is casual yet elegant. In the evening the setting is darker and has an American classy bar feel. 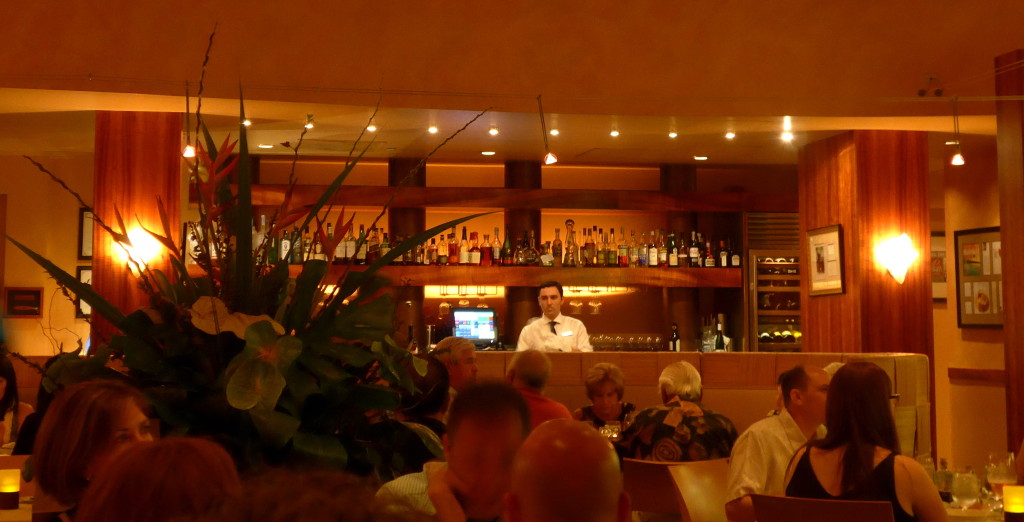 The sustainably-minded Farmer Dinner Series, where a special menu created by the chef is being presented to the diners along with the farmers’ produce, are forward thinking. The farmers are available to answer anything that might interest the customers about raising and handling their meat, vegetables, cheese, and other food stuff that they supply to the coveted Alan Wong’s restaurant. No wonder the chef became locally loved by the entire Oahu community. The latest of the chef’s published works is The Blue Tomato cookbook, where he shares not only his most successful recipes, but also the inspirational people, places and products that gave birth to his multi-ethnic cooking style.
Alan Wong’s has a vallet parking service that is convenient, because the parking space in the area is not easily found.
Address: 1857 King Street, Honolulu, HI 96826Contact: +1(808) 949 2526