COI’s location between San Francisco’s edgy China Town and its polished Financial District, the two disparate worlds rubbing on each other’s shoulders, is not accidental. This duality reflects itself in the two-Michelin star cuisine of a restaurant every local foodie has on his to-eat-list. Here, Asian ingredients and cooking techniques meet costly and mostly locally sourced ingredients. This bounty of the Western US coast is celebrated in California-style seasonal cooking spirit by COI’s chef Daniel Patterson. 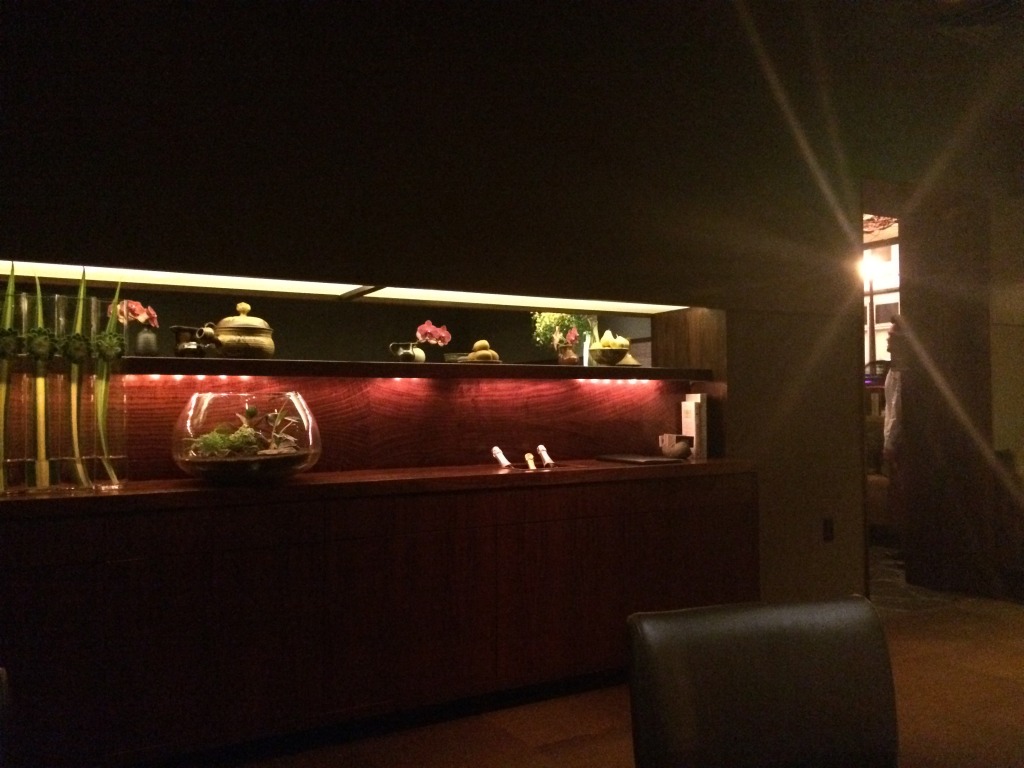 Yet, the two Michelin-stared chef makes his menu look incomprehensibly exotic for the culinary school non-graduate diner, making his waiters indispensable in clarifying what exactly is being served on each plate. The more curious minds can take a print out of the current menu and scout either online or scan lengthy indexes of the food encyclopedias. Below, I will puzzle out and deconstruct the philosophy behind Patterson’s craft from my recent meal there. 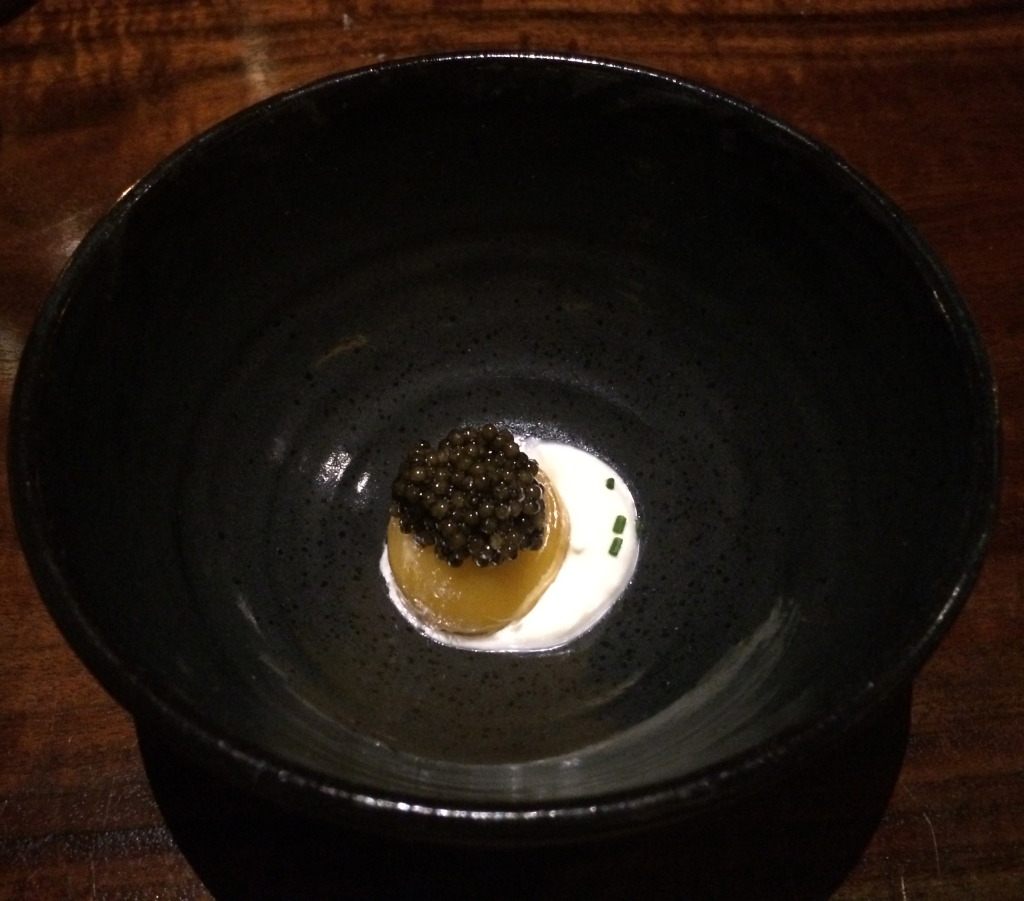 As you settle in the Zen atmosphere of the restaurant’s dark, soul-soothing and mind-sharpening interior you will be offered an apéritif. A 1999 vintage sparkling California brut sharpens your palate and fizzes out energy necessary for the 14-course dining experience ahead.
A trio of amouse-bouche land one after another on your table like a fleet of fighter jets. Some still fully loaded with a bomb, waiting to explode in your mouth. A cracking California Bowl consisting of puffed brown rice crisps for dipping into a smooth and thick avocado purèe gets an artistic façade of green sprouts. Followed by a refreshing bowl of Niabell Grape Ice with wild bay salt just before the final flavor bomb of California Sturgeon Caviar that, like a crest atop of an egg yolk poached in smoked oil, announces a luxurious splurge. Its richness is thoughtfully balanced by a dollop of refreshing crème fraiche and a light sprinkle of chopped chives. 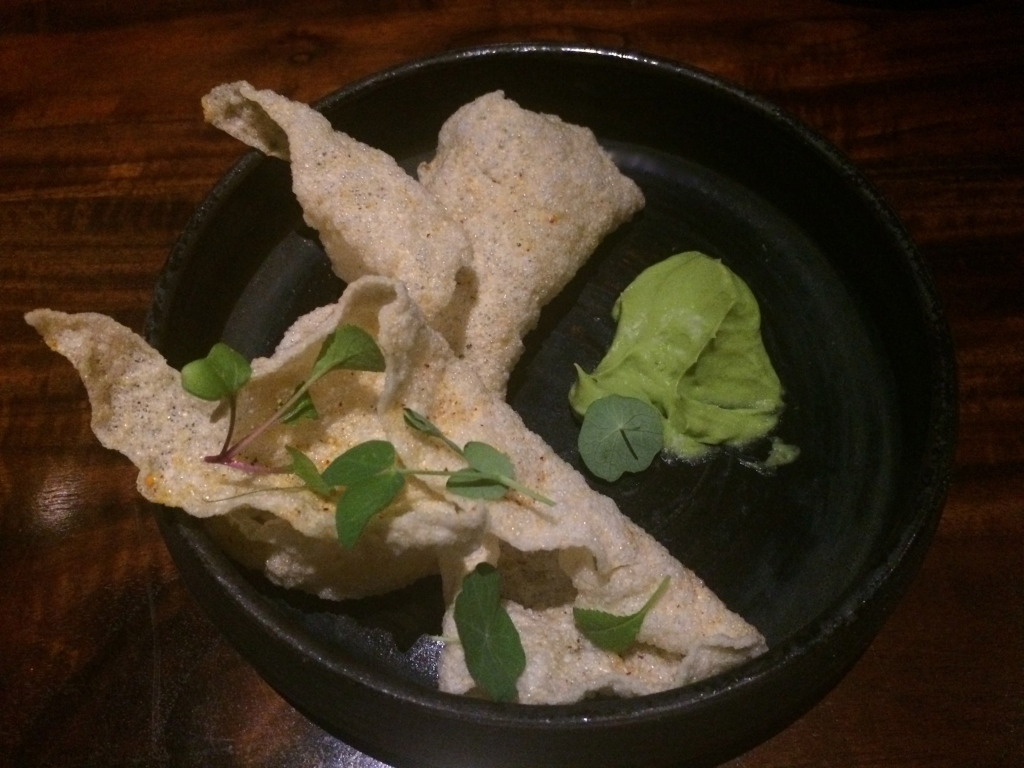 As the next courses arrive, it becomes apparent that the restaurant’s naturally colored earthenware underscores each dish – by lifting up its colors and textures – as if highlighting the artistic importance of its contents. The chef’s locavore and seasonal sourcing flashes out in seasonally specific dishes like Geoduck with cucumber, radish, purslane, salad burnet. Native to the West Coast of America, this clam is a popular feature of Northern Californian chefs. In a similar light form succeeds Fall Rose with beet, red endives, walnut, turnip, mints and flowers; and again seasons recalling Late Summer Corn With Savory Flavors of pumpkin seed, hominy (dried and specifically treated maize kernels), chile, huacatay (South American herb from marigold family known also as Black Mint). Its spicy touch has geographical nuance in California’s historic ties with its Southern neighbors.
The sommelier turned up once again with the first two courses, serving us a dry Riesling from Santa Barbara County. Staying as local as he could the wine waiter was back soon just before the richer corn dish with a bolder glass of Peay Estate Chardonnay coming from around-the-corner cool region of Sonoma. 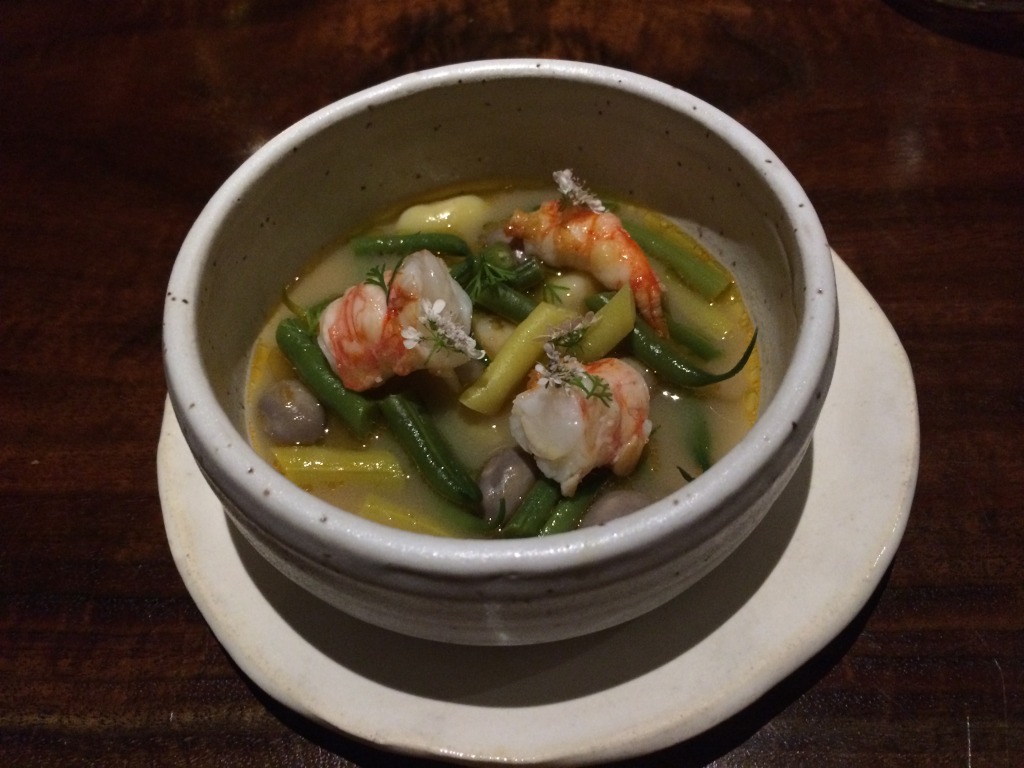 Back to the sea (San Francisco is a coastal town so a locavore cannot escape it) with Spot Prawn, pole and Chilean beans beautified with flowering cilantro (parsley leafs). The word play here is sophisticated again. The pole beans have long green or yellow pods and like vine crawl high up around supporting stick or ‘pole’. Who would think of serving them with prawns? Perhaps only the chef who knows how sensitively seasonal the spot prawns that are actually shrimps are. 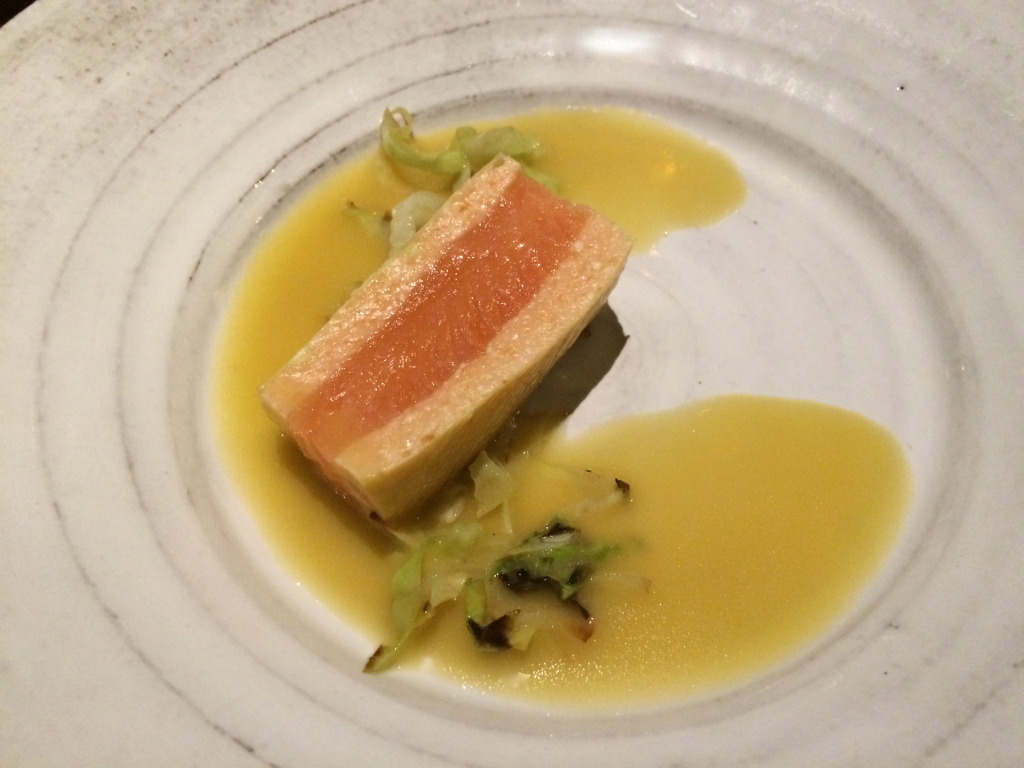 Staying in the sea with Red Trout Wrapped in Yuba on charred cabbage and sauce of dried scallop and ginger, that was my favorite dish. Yuba is a soy milk skin collected from its top during boiling. It is then dried and later used in cooking since, like a mushroom, it soaks up liquids and expands like a sponge. It has a neutral taste, therefore it highlights whatever ingredient it is served with. Its spongy texture contrasted with the soft flash of the raw trout, whose fishy flavor was maximally minimized by the chinese style sauce. 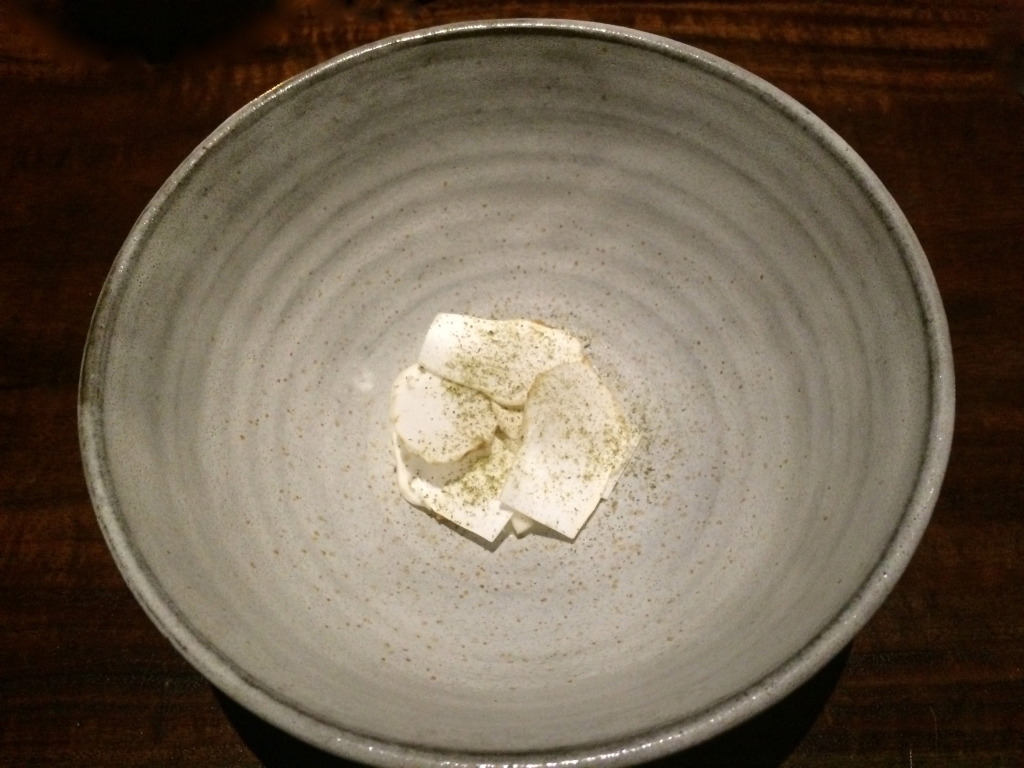 Moving to the land, the sommelier switched to a well aged 2001 vintage red Cabernet Sauvignon from Napa Valley. It was a surprising revelation to me that the clean, slightly spicy and fresh Matsutake mushrooms paired well with this usually powerful wine. With some age though the Cab was smoother and with the potato-pine needle purée hidden under the thin raw mushroom sheets it worked. Matsutake are used in Japanese and Chinese cooking. Today they are also grown in Northern California, which is favorable for this pine mushroom’s growth. The chef might had been inspired by this fungus’ english name as he added some pine needles into the potatoes.
The red wine made even more sense with Pastured Beef Encrusted In Seaweed Powder. The unexpected addition was its accompanying seared and shaved raw cauliflower and super-green parsley purée. Harmony was once again achieved with a magic stick of the chef. 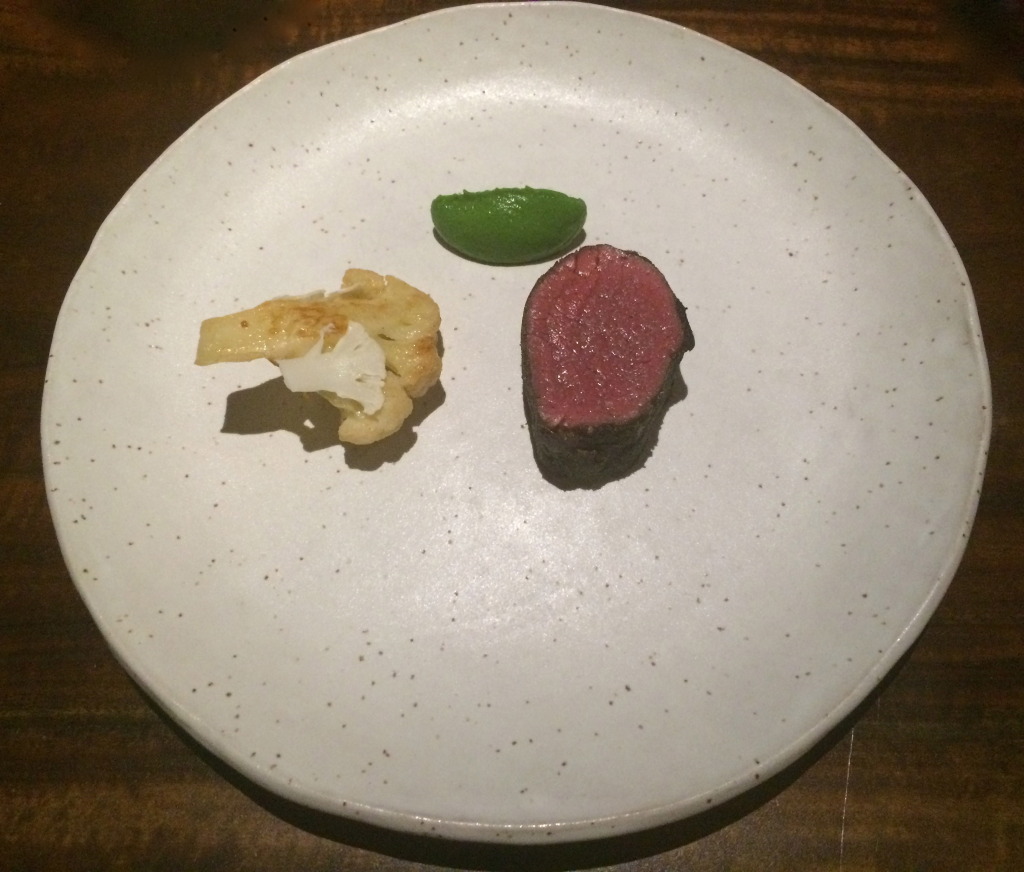 The desserts are far from extinguishing the creative fire of COI. Starting small with by Japan inspired Coconut Mochi bun with kiwi and shiso, the pastry chef adapted the mochi’s doughy texture to California climate by shaping the chewy pasta-like sweet dim sum into taco pockets filled inside with the fresh shiso leaf and gelato.
The real sweet art was revealed in Vanilla-Poached Bartlett Pear in a soupy raspberry-red wine and topped by soft black pepper meringue and cracked pistachios. As its name suggests, texture plays a high tone in the gustatory composition of this pastry. Crunchy and soft, liquid and firm, rough and smooth – all mesmerize your mouth in one bite. 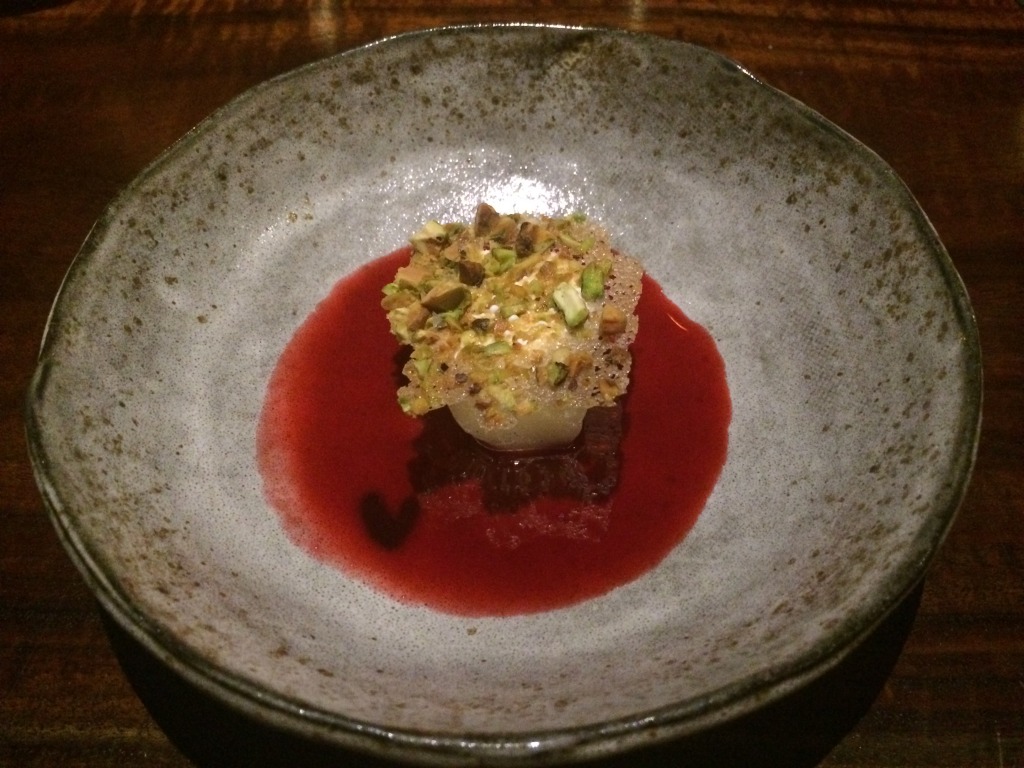 There is no lack of sugar in the tasting menu as a more simple looking Nine Grain Cake Caramelised in Sorghum served with fromage blanc ice cream arrives after the two previous glucose teasers. Sorghum is a gluten-free cereal grain that usually needs other flours to create a more spongy cake texture. By caramelizing it the chef solved its roughness and by adding a scoop of Fromage blanc (French term for fresh thick yogurt-like cow cheese) gelato its sweetness was tamed. The sommelier served it with a sweet glass of a Semillon and Sauvignon Blanc blend in the Bordeaux Graves style but locally made in Napa Valley by Oro Puro.
The wine waiter was spotless, knowledgeable and understood very well what his guest want. Introducing you to unusual wines if you are adventurous or keeping it safe by suggesting wines measured to your personal taste. The complex and by age well-integrated black fruits and floral aromas of the Corison made by the ‘Winemaker of the Year’ according to the San Francisco Chronicle were a new local surprise for our elegance and maturity seeking palates. Not cheap by a bottle, therefore we appreciated trying it by the glass. 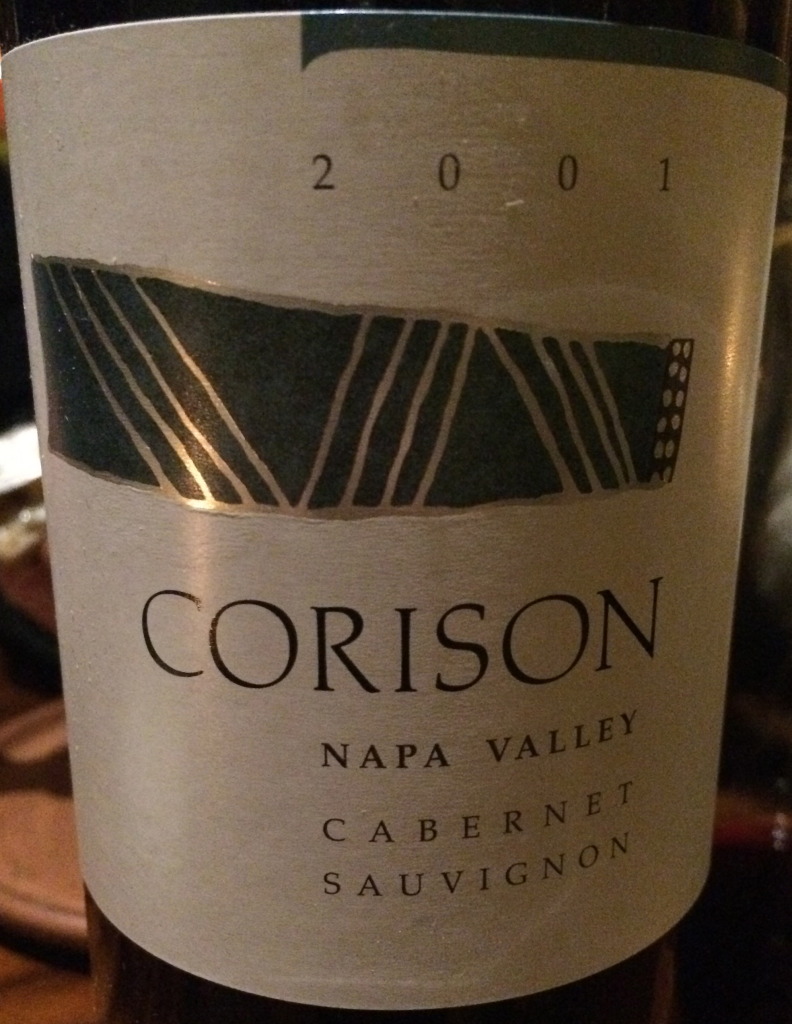 To finish the Asia meets West Coast America feast a Yuzu Marshmallow in frozen dark chocolate was served with our smoky pot of aged orchid Chinese tea from 1980 harvest. It may look like a huge meal, but the three-to-five sized portions and the chef’s quest for balance, not force, were just perfect. That means that I did not crave a pizza on my way back through the Italian quarter and had a sound sleep afterwards.
Address: 373 Broadway, San Francisco, California, USA
Contact: +(1) 415 393 9000
Opening hours: Tue-Sat for dinner only from 5:30pm.