Aesthetic perfection, haute couture ingredients and sleek flavors lie behind the contemporary French cuisine of Amber’s head chef Richard Ekkebus, whose effort was awarded two stars in the coveted Michelin guide.
The Dutch chef casts a “light touch” on his ingredients, not overfeeding you with too much cream, meat and large servings. His Dutch roots were crossed with the French in Paris, where he worked at the three star gastronomic jewels of Pierre Gagnaire and Guy Savoy. 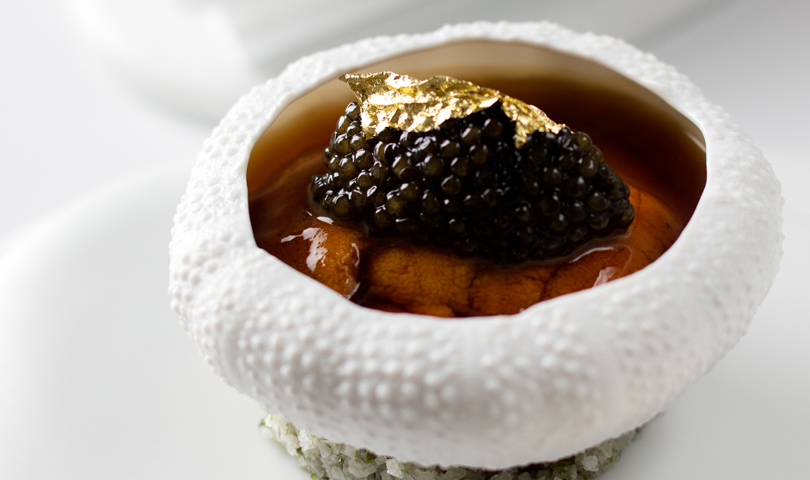 Presentation is indispensable in any art form and eating with our eyes is the spotlight in contemporary restaurants. Nesting inside a bone white Bernardaud china formed as a sea urchin shell is one of the chef’s signature starters – the Hokkaido uni (sea urchin) with caviar in a lobster jell-O. Its sophisticated aspect is underlined by raw cauliflower with crispy seaweed waffles. Asian ingredients shine in the European chef’s hand, who created an artistically as well as culinary perfect dish. You can also start with one of the Russian style caviars served with traditional accompaniments. The special reserve ‘huso huso’ beluga will cost you more than an entire eight-course degustation menu multiplied by almost five people. Not the best deal, unless you are a billionaire who doesn’t care much about such a little expense. 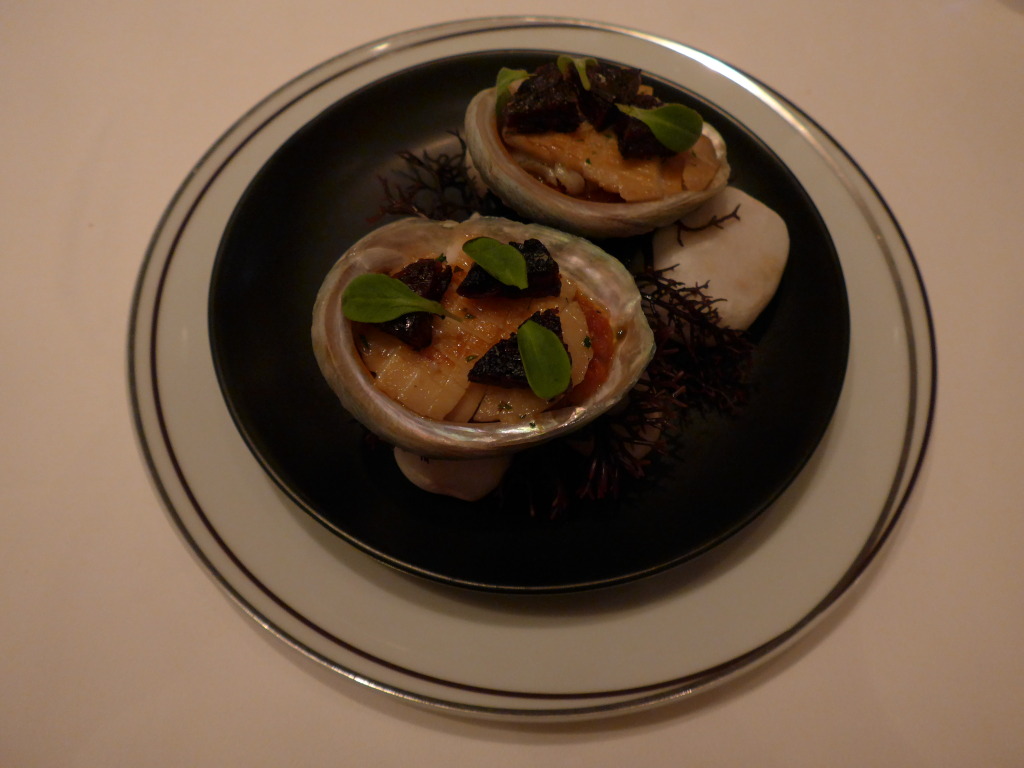 Seafood like a permafrost remains on the menu through all the seasons. This staple of the culinary year at Amber recalls the chef’s childhood by the Dutch seaside, while his accent on lighter ingredients is tuned towards the increasingly health conscious diners. After all most of us still want to indulge in many of the artful culinary innovations at restaurants, but not suffer the symptoms of the overfed such as bloated belly and heavy attack of tiredness as the consequences of a dinner out.
Having Japan just a short flight away lured many Hong Kong residents to frequent trips, but so far not many local restaurants in town drew upon the advantage of importing the island country’s superb ingredients. Foreign chefs like Joel Robuchon, Umberto Bombana and now also Richard Ekkebus are leading the Japanese influx of its natural elements. From fish and seafood through beef and leafy greens, their quality is superior to most of local and chinese produce marked by safety scandals and terrible pollution. Amber gets daily its fresh fish and seafood from the markets in Fukuoka and Hokkaido. During our dinner at Amber a delicately steamed Abalone was one of the starters reflecting a seasonal availability of this prized seafood flown directly from Japan. Served in pearly inlaid shells the mushroom textured abalone were an impeccable specialty of the day. 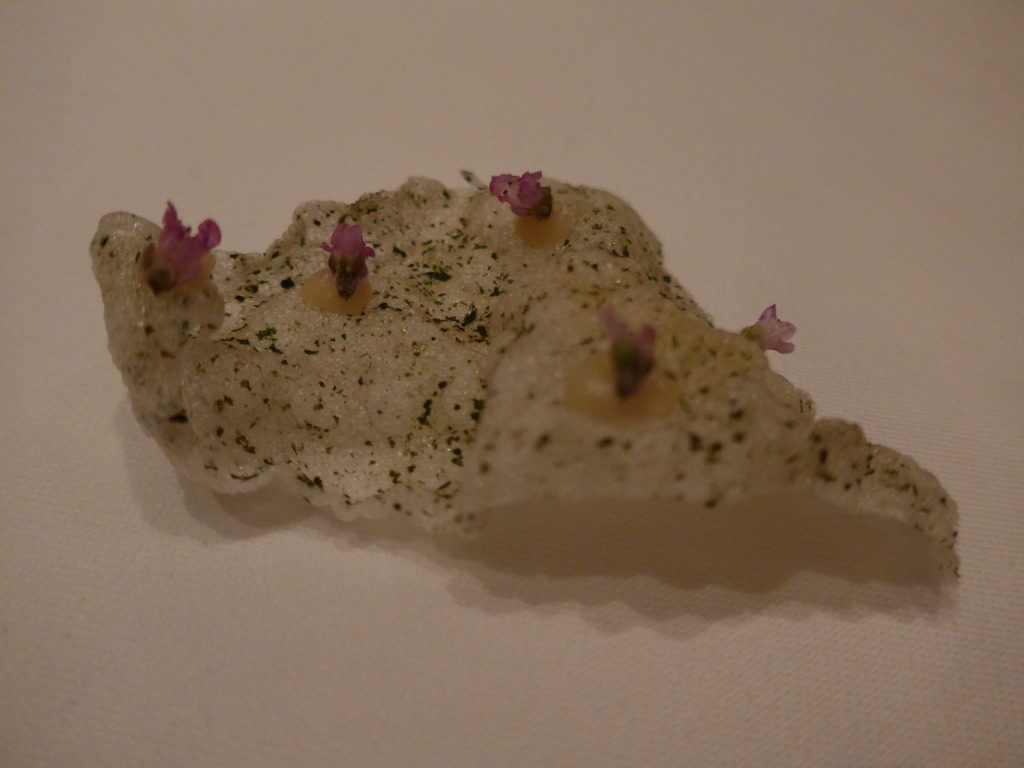 Beauty and natural simplicity is culturally important in Japan. The chef transferred this idea to Hong Kong embodied in a seaweed rice cracker planted with purple flowers. Served along with other creative amouse bouches, that set the natural theme focused on simple beauty. 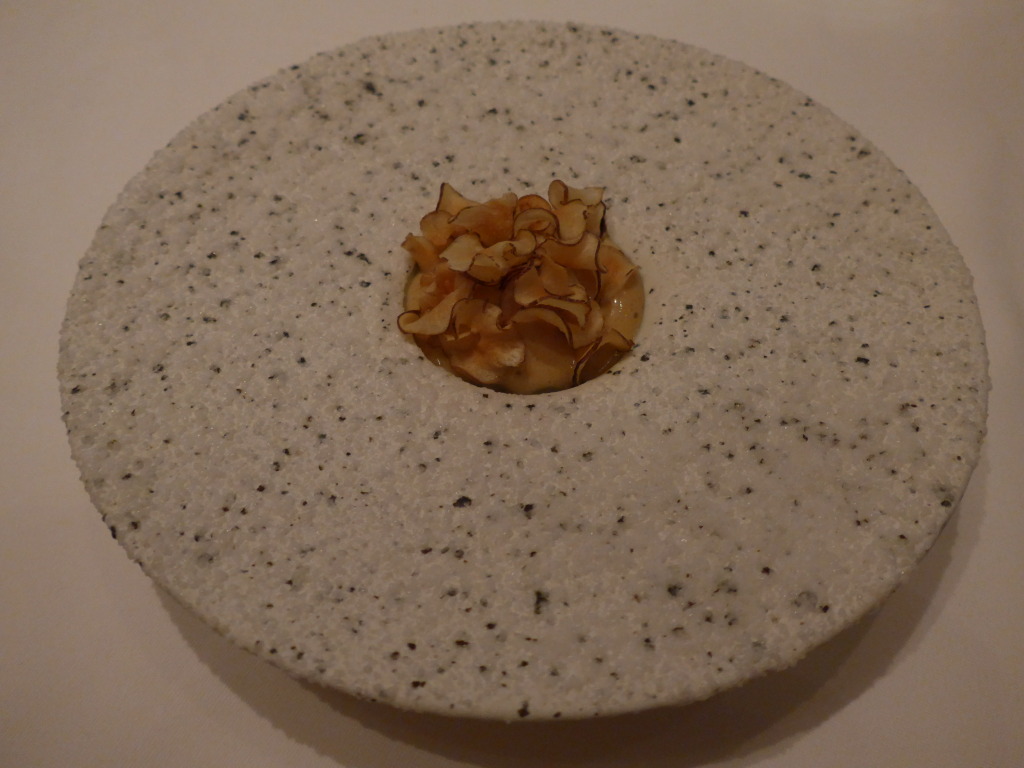 Crunchiness featured in every single bite of the chef’s welcome treats. Some were set in a needle pinching helmet of a sea urchin, others like the foie gras lollies perched on thin sticks and the rest on a carpet of pumpkin seeds.
This trio of amouse bouches at Amber was served before a corpulent stone plate filled with another compliment topped by fried root chips and then came a small selection of breads, of which a thin sheet of crisp savory dried bread was a highlight. 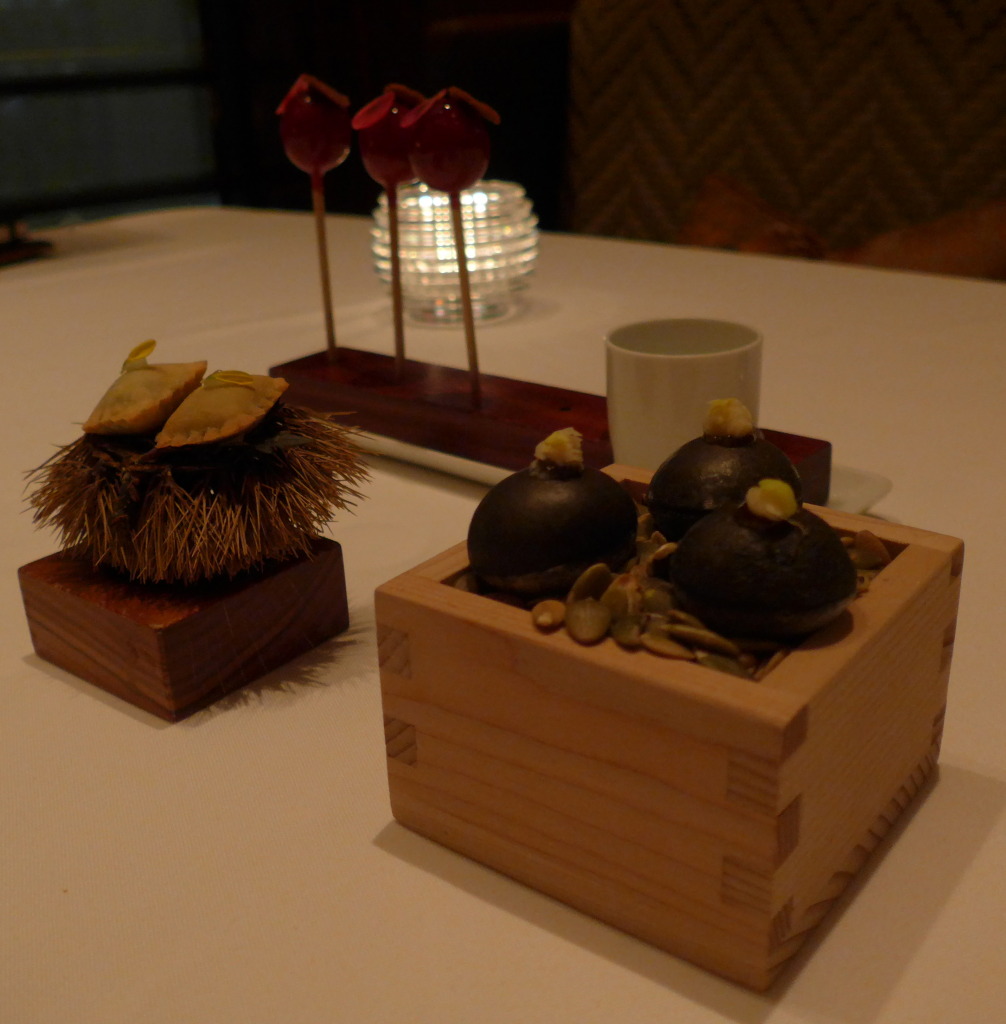 Moving to main courses of the à la carte menu during cold seasons, a wide selection of wildly hunted game such as hare, partridge or venison, all from France, crown the land selections. The hare for two persons is plated in the French traditional style of two services, but there the old ends and novelty captures the chef’s attention as he creates a hare pie with caramelized persimmon, brussel sprouts and black trumpet mushrooms, and after serves a lighter autumn salad with the meat.
The sea world can be represented by curiosities like an asian bizzarely-named long-living kinki (translated also as idiot) fish, japanese amadai (tilefish) and chef’s favorite Brittany blue lobster. The lobster was presented with pork belly, trotters and other succulent delicacies from the Western and Eastern fronts of the globe when we dined there in December.
Vegetarian dishes are aplenty and the chef even concocted a meat-free eight-course degustation menu. 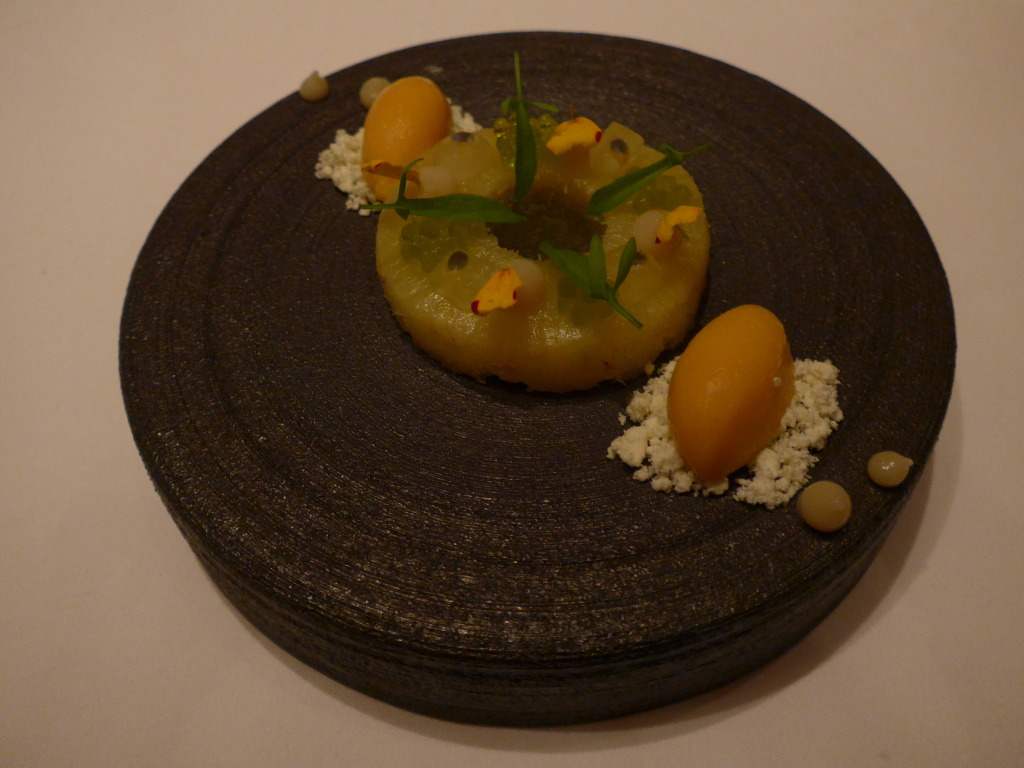 In it desserts such as the Pineapple poached with aloe vera, banana, micro sorrel, olive oil snow & caviar, a sorbet of mango & passionfruit are included from the regular menu. The warm sweet fruit contrasted wonderfully with refreshing and aerial olive oil snow borrowed from the molecular cuisine cookbooks, and matched with the exotic fruit sorbet.
French unpasteurized cheese became the recent fashionable frenzy in Hong Kong, despite posing a considerate safety risk. Amber doesn’t stay behind including these tasty bacteria (friendly, but possibly in unlucky cases also some food poisoning causing species) heavens into its tasting presented seductively on an elegant cheese tray. Cheese lovers find it hard to resist the slightly hazardous temptation. 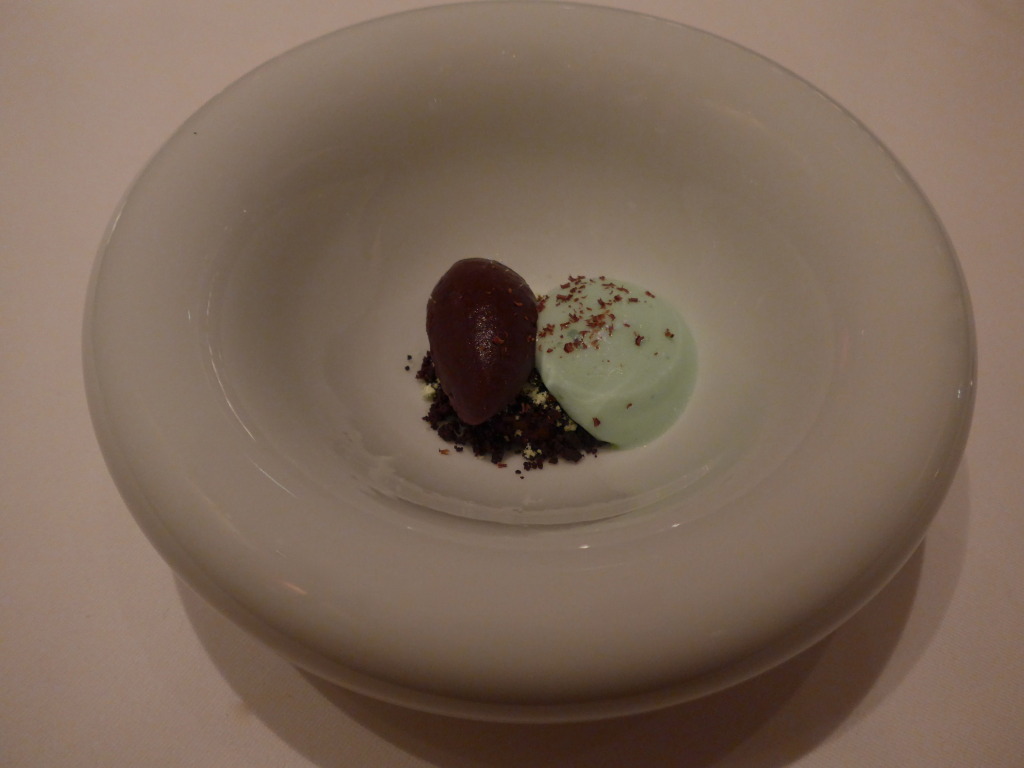 The wine list prides itself with an almost a thousand different labels. Not just French wines but also Australian, Chilean and other modern fermented grape produce. The sommelier is passionate about his job and happily recommends ideal glasses for pairing. Dining inside a private wine room surrounding its imbibing guests with glass walled cellar artfully stacked with bottles surely turns any connoisseur on. The room fits up to 12 people or after splitting a two smaller groups.
Ebony, bronze, walnut and other luxurious materials used in the captivating main room interior by futuristic designer Adam Tihany set a comfortable scene for business lunches, romantic dinners and special celebrations. The organ pipes evoking chandelier assembled of over four thousand bronze rods might look as stalactites hanging down in a cave but they draw your eyes constantly towards their thoughtfully created space. The restaurant’s name is aptly incorporated in the honey-yellow amber hues of the interior. 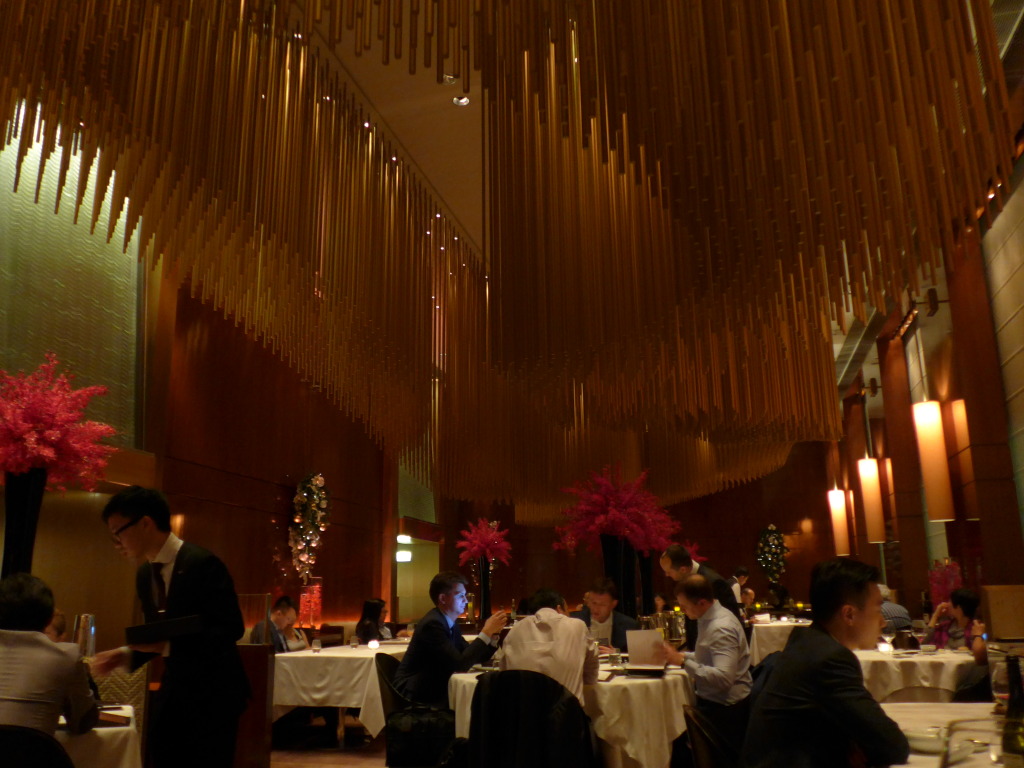 Since our food loving friend was not impressed by the eight-course degustation menu a couple of weeks before our dinner, we all voted for the à la carte, and had to revise his disappointment into “We must come back here” mindset as we enjoyed every single dish presented to us that night. The high price of the dining experience at Amber ought to be justified by guests’ satisfaction. The not too intrusive service is there to answer all questions only when you desire, and that is just perfect, so you can fully enjoy conversation around your table .
Address: The Landmark Mandarin Oriental hotel, 7F, 15 Queen’s Rd, Central, Hong Kong
Contact: Tel: +(852) 2132 0066
Opening hours:
Breakfast daily 7am – 10:30am
Lunch daily 12noon – 2:30pm
Dinner daily 6:30pm – 10:30pm