Kanda is not just a district in Tokyo and a name for one of its subway stations, but also the last name of a Three Michelin stared chef Hiroyuki Kanda and his namesake restaurant. Since the guide’s inauguration, Kanda has been a constant Three star laureate, mainly because of the chef’s creating his own version of the artful kaiseki in modern Tokyo. 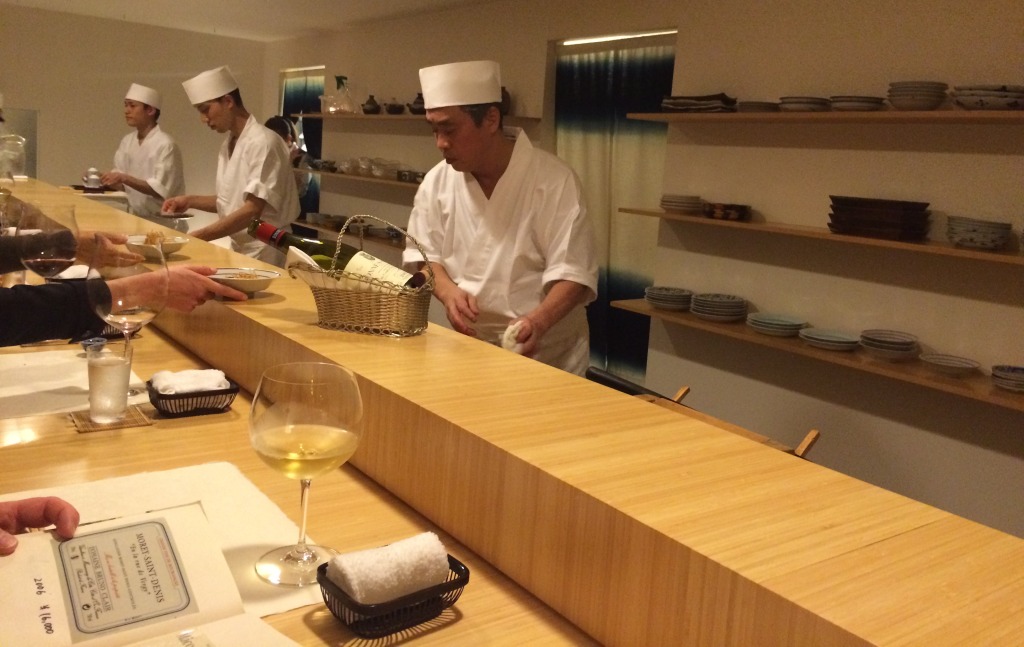 As it is more common for restaurants in Tokyo, Kanda is located is an apartment building, and not obvious to a non-japanese speaker. Getting the exact address to a taxi driver helps as he can navigate you in this discreet small residential inlet in the midst of the upscale maze of the Roppongi district. Do not hesitate to enter inside the door facing you right on ground floor.
Hiroyuki Kanda speaks also English and French, which is a welcome news for foreign visitors since it is rare for the japanese chefs to profess other languages than their mother tongue. 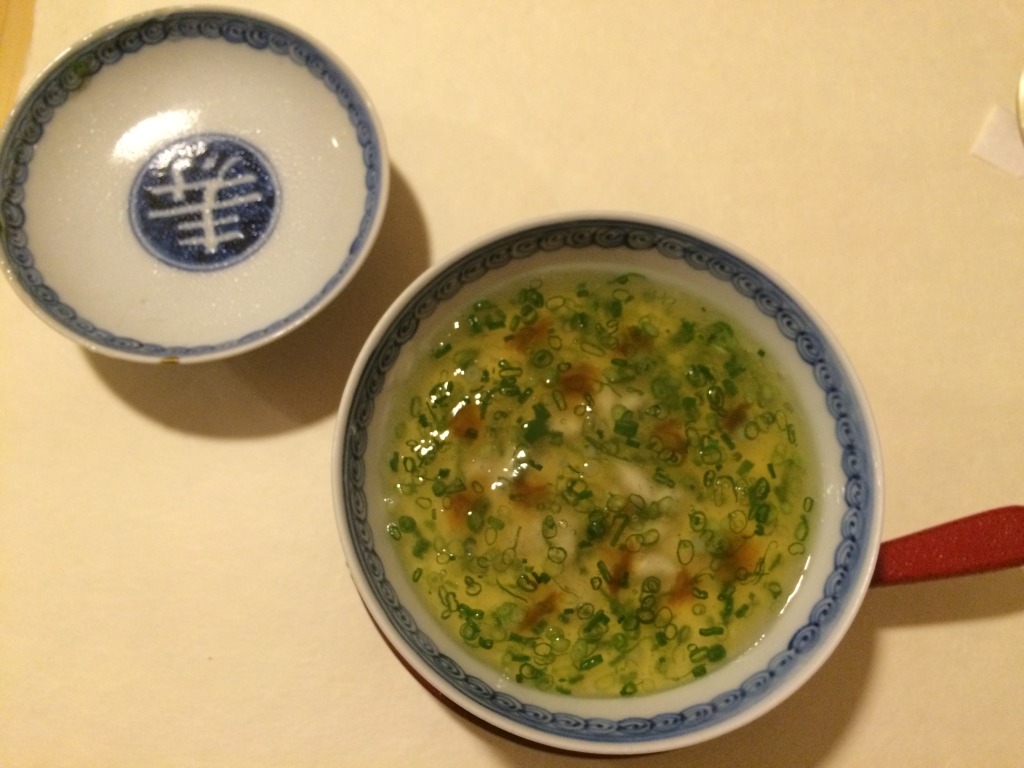 The chef stands firmly behind his innovations. Emboldened by his experiences in France and renowned restaurants in Japan he seems proud to stream away from tradition. Although he serves most of the established kaiseki courses, he creates his own order.
There is no printed menu and you will be served about 10 courses one after another, so if you are interested in what is in your bowl inquire as the food is being served. 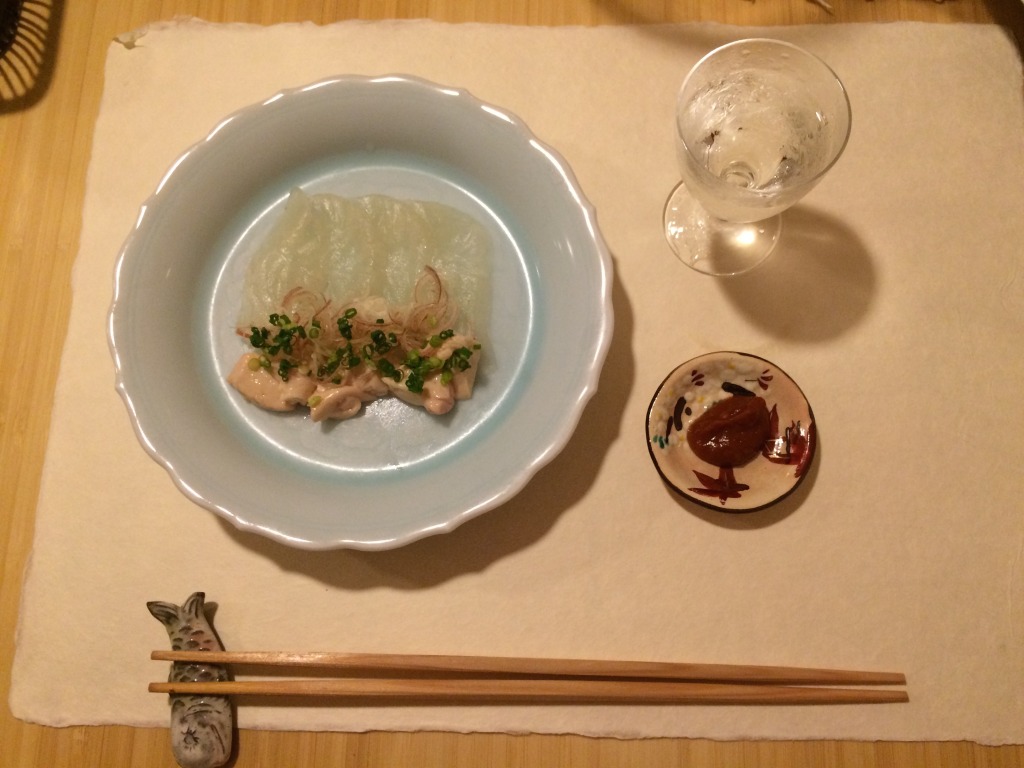 His hassun traditionally setting the seasonal theme was not an assortment of miniature dishes, but rather a piece of snow crab baked with its hearty roe. I have eaten this crab in almost every set menu during my two weeks in Japan and while Kanda’s take measured up to most of the others, it was not superior. Then we were served the first warm dish that arrived in a navy blue ornamented porcelain bowl. On the bottom was a delicate creamy tofu mixed with seafood and baby mushrooms topped with a spring onion jelly. Smooth texture and more pronounced taste than in similar dishes served at the zen vegetarian shojin ryori style eateries in Kyoto. 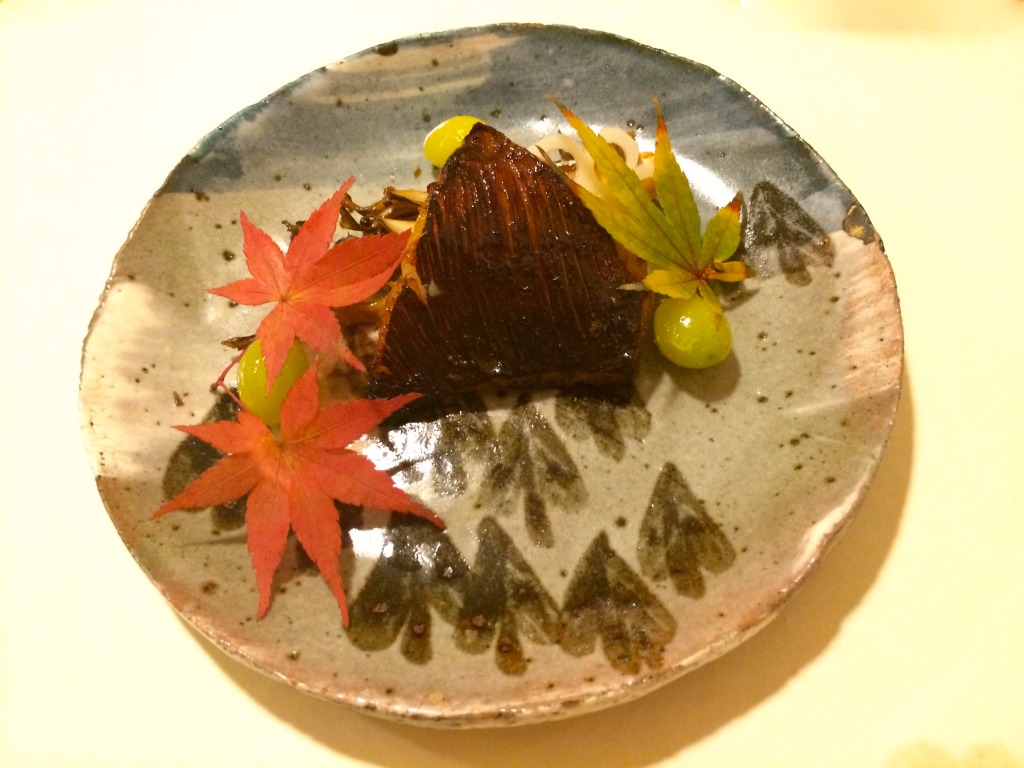 The mukozuke, usually a seasonal sashimi were four thin cuts of white fish (cod – presumably Higetara Cod variety) plated together with its silky liver or sperm sacs (the chef translated it after pondering a while as liver, but it is more common in Japan to serve the popular delicacy of the cod’s sperm sacs known as ‘shirako’), diced green spring onion and its clear thin rings & umeboshi (japanese pickled plum) sauce served on a side. 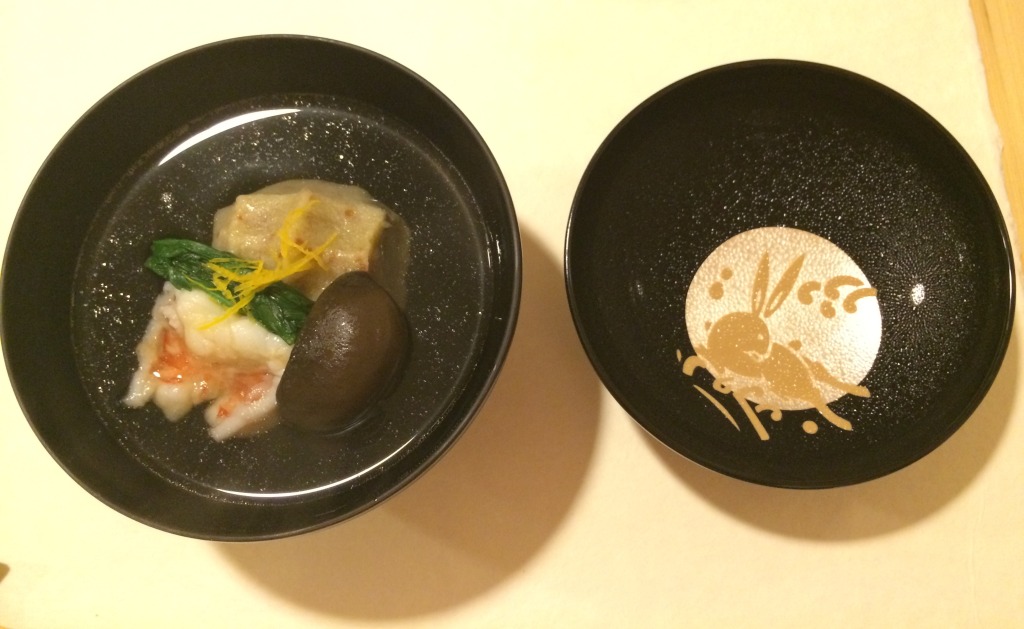 While we were still in a sensual ecstasy from the dish, what followed was a genial, while a simple combination, of white Alba truffles shaved on bonito tuna (‘katsuo‘ or skipjack) nigiri sushi. Yakimono, a seasonal grilled fish came after. Adorned with ginkgo nuts and colorful autumnal maple leafs it reminded me the most of the traditional kaiseki dishes served at Kikunoi in Kyoto.
The futamono of lidded clear dashi broth with shrimp, fish ball, matsutake mushroom and leafy greens displayed the pure flavors and quality of each of the ingredients and it was far from boring. The smoky dashi highlighted wonderfully the produce of the land and sea. 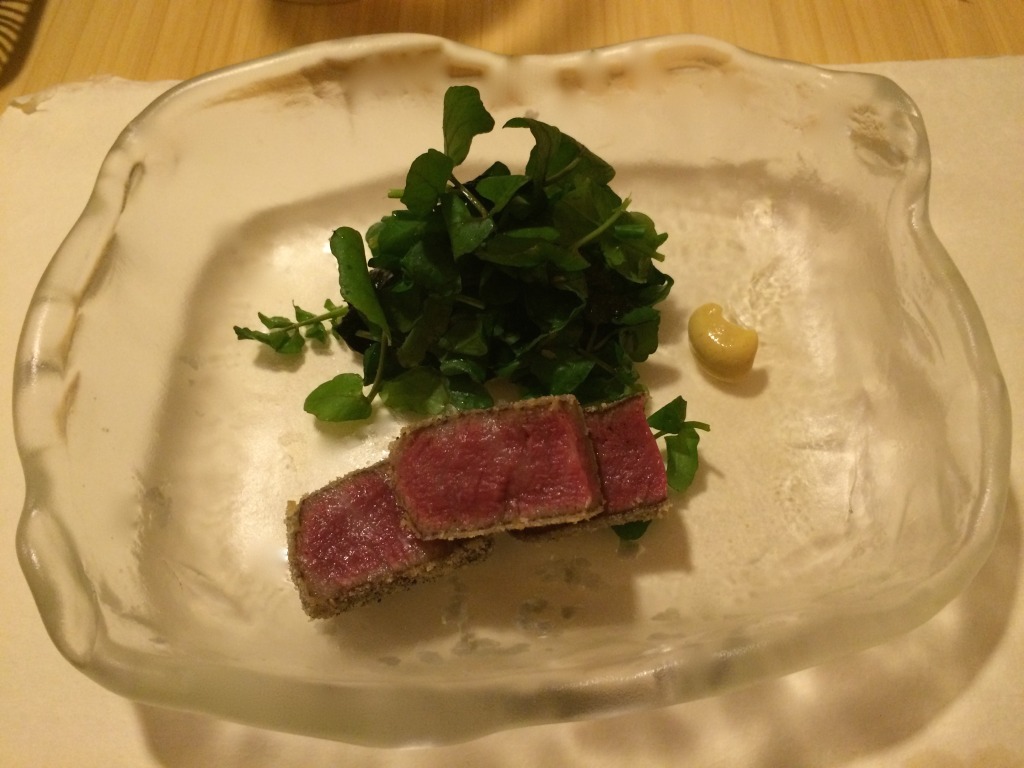 A very modern pinnacle of the kaiseki tasting menu of the night was the slightly grilled, almost rare, beef steak enveloped in a breadcrumb crust. It was succulent and meaty, unlike the fatty wagyu, often considered the most desired type of Japanese steak, because of its extreme marbling. It seems though, that most refined eaters prefer a leaner cuts, so they can taste more of the meat. Served with a wild bunch of greens and a dollop of spicy mustard the plate was well-balanced. In a kaiseki meal it can be classified as shiizakana, a simple dish showcasing the best ingredients the chef managed to acquire.
Those of you that drink wine or sake during dinner still had space for more food, so we welcomed the gohan of a small bowl of cooked rice topped with sticky shrimps. The shrimps were sweet and savory at the same time, but also more simple, which is welcomed by the end of a meal. 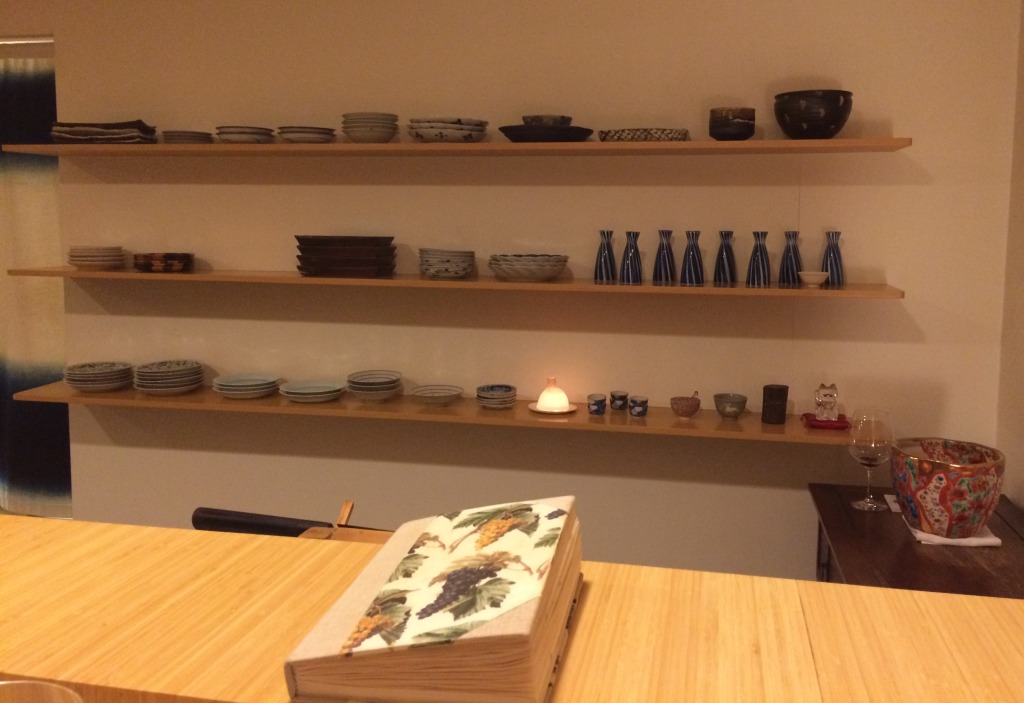 The handmade book-like wine list is very personal and reveals the chef’s background spent in France. Although the French wines (mostly Burgundy and Bordeaux; we had a Grand Echezaux that was very well priced) are in majority, there are some California icons such as Ridge Monte Bello or the ridiculously priced Screaming Eagle as well as Australian beauties like a Pinot Noir from Paul Lato, that is particularly interesting. Most of the wine labels are glued on each page accompanied by a hand-written price. The chef is on hand to recommend a bottle for you if you cannot decide.
The sake selection is also impressive, larger at most sushi restaurants in town. We went for an unpasteurized medium bodied sake, the name of which these of you who can read Japanese can puzzle out (it is the common problem with sake that the labels are only in Japanese). 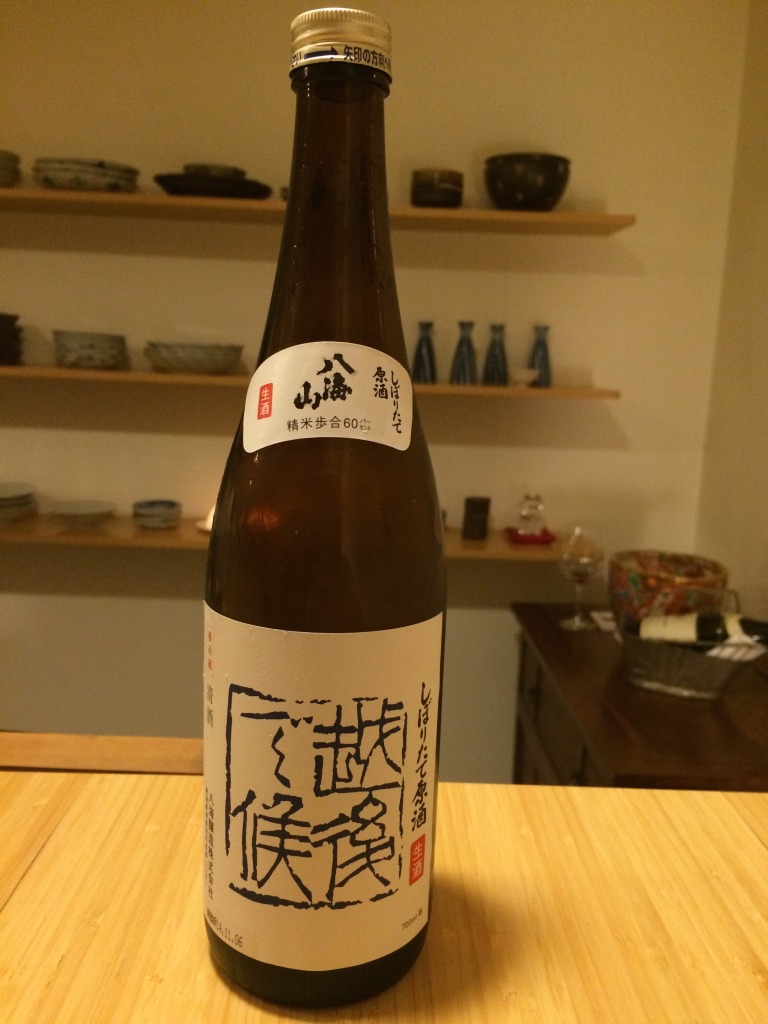 Our meal had still two more dishes lined up. The perfect sweet three dots as if the story should continue – perhaps on your next visit to Kanda – in the form of mizumono after the meal, was first a fruity custard with a cup of Japanese green tea and the final gong sounded in a superb not too sweet buckwheat ice cream. I could easily have had two scoops of that! 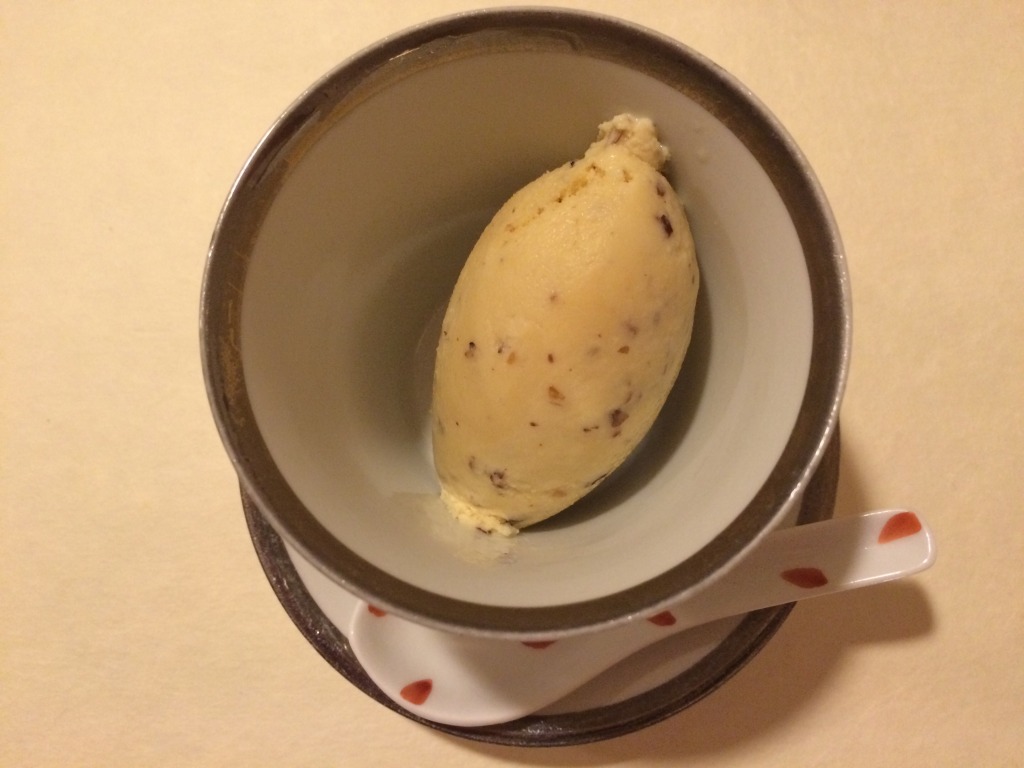 With its three Michelin star badge, Kanda is expensive, but for real foodies it is worth savoring its modern approach to this very traditional Japanese culinary art. Moreover, the service is very personal, since the main room has only one perfectly polished wooden counter seating eight, and only one small private room. The limited seating makes it challenging to reserve as well as more exclusive like some of the excellent sushi restaurants in town.
Address: 3-6-34 Moto-azabu, Minato, Tokyo 106-0046, Japan
Contact: Tel: +(81) 03 5786 0150
Opening hours: Daily for dinner except Sunday & holidays: 6pm-10pm