Kikunoi is perhaps the most influential kaiseki restaurant in Kyoto. The cuisine is traditional with a pinch of avant-garde as conducted by its third generation owner/chef Yoshihiro Murata. Inspiring three Michelin-stared and highly aspiring Japanese chefs, Kinukoi is a reference to perfection directed by nature and skills. 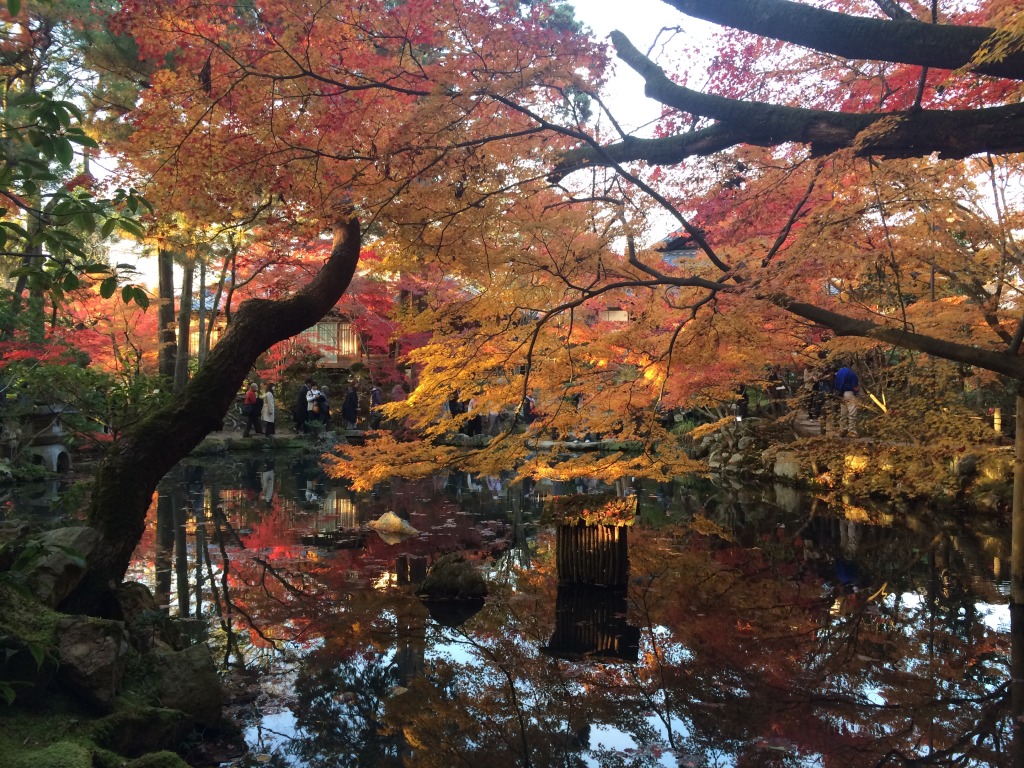 As buses packed with Japanese and foreign tourists flock to this former emperor’s capital to admire the magic of the autumnal changing of the leafs’ colours, the kaiseki chefs shift their tasting menus to display the bounty of the fall produce. Kaiseki has been always directed by seasonality. November, in the old Japanese called Shimotsuki, is the starting season for the leggy snow crabs, sweet citrusy yuzu, cooked chestnuts, but also the tender orange persimmon fruit. 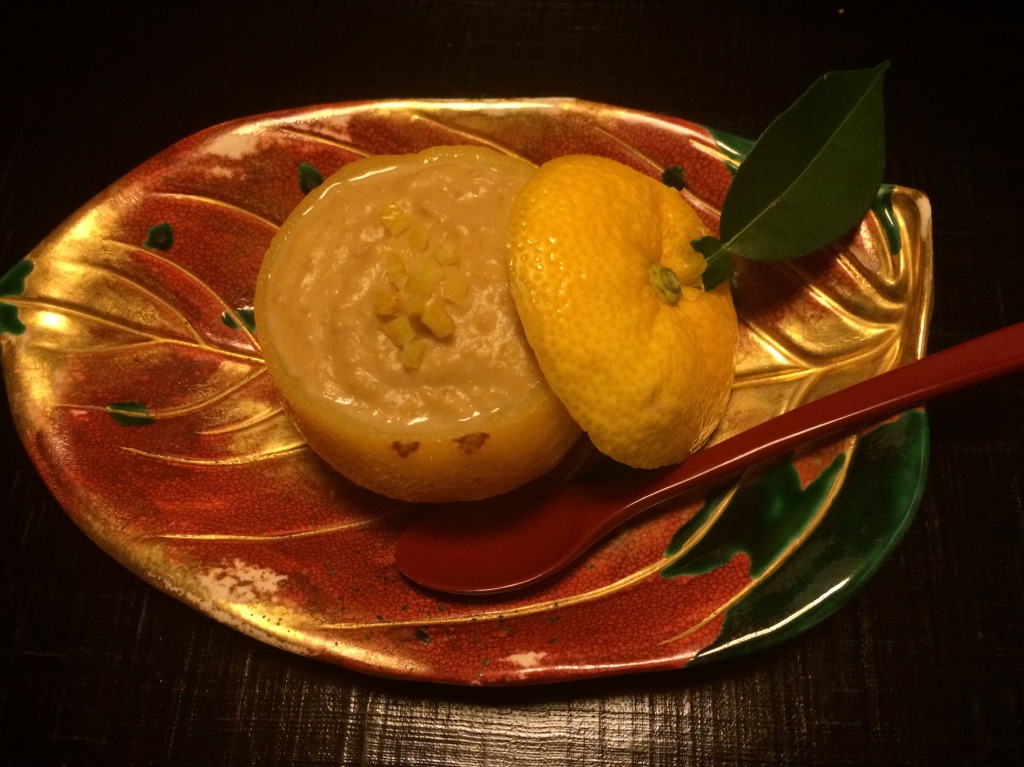 Yuzu, the widely used Japanese fragrant citrus, is the most aromatic when in season in Japan (late November & December), and the chef at Kikuoi decided to show it off in a number of dishes. Such as in the Sakizuke, a simple starter welcoming the guest, of Yuzu tofu, yuzu miso sauce and diced yuzu. This was a fragrant reminder of how in the West we get just a dainty reflection of this impactful Japanese lemon. Spooning out the creamy tofu from a hollow yuzu peal, I wished there was more of it, but as the evening progressed, I was constantly being assured, that every single dish was a work of art pleasing my taste buds. 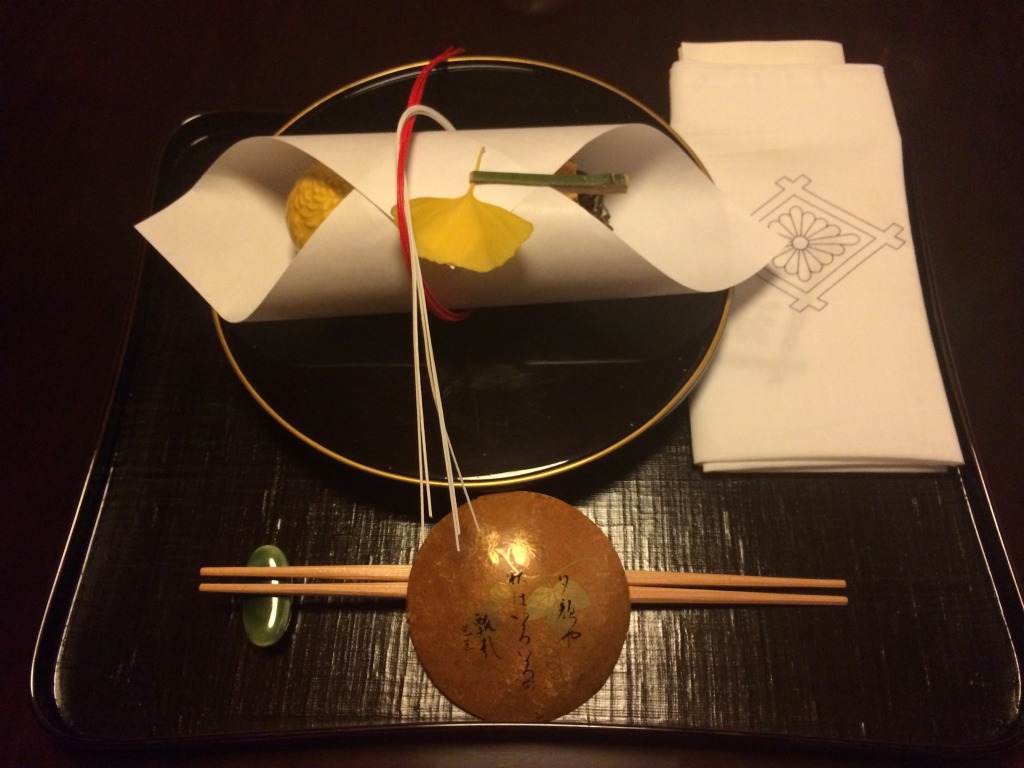 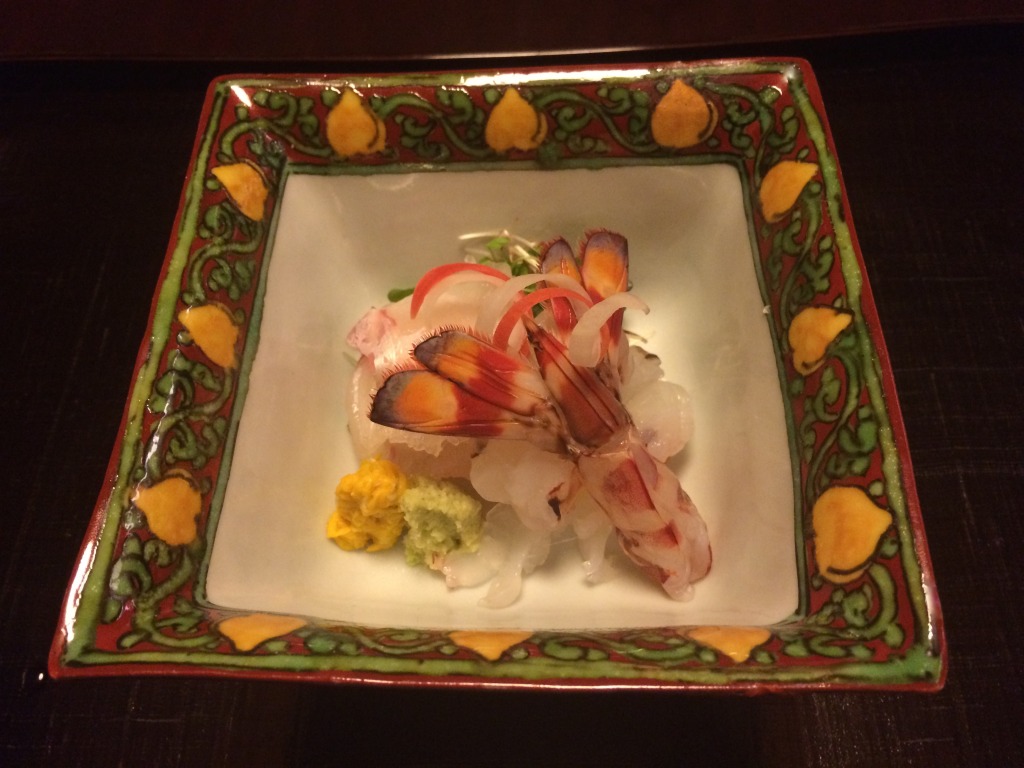 We were treated twice to the course of Mukozuke, which is a seasonal sashimi. First came a hand-painted plate in colours mirroring the meal of fresh Tai sashimi (red sea bream) and red & white striped prawn. The later was crunchy on the outside, smooth and delicate on the inside given to the chef’s quick immersion of the gently cooked prawn in an ice water. Accompanied by freshly grated kicking green wasabi and yellow moist chrysanthemum flowers, this was a highly creative and exquisite dish any sushi master would bow to. 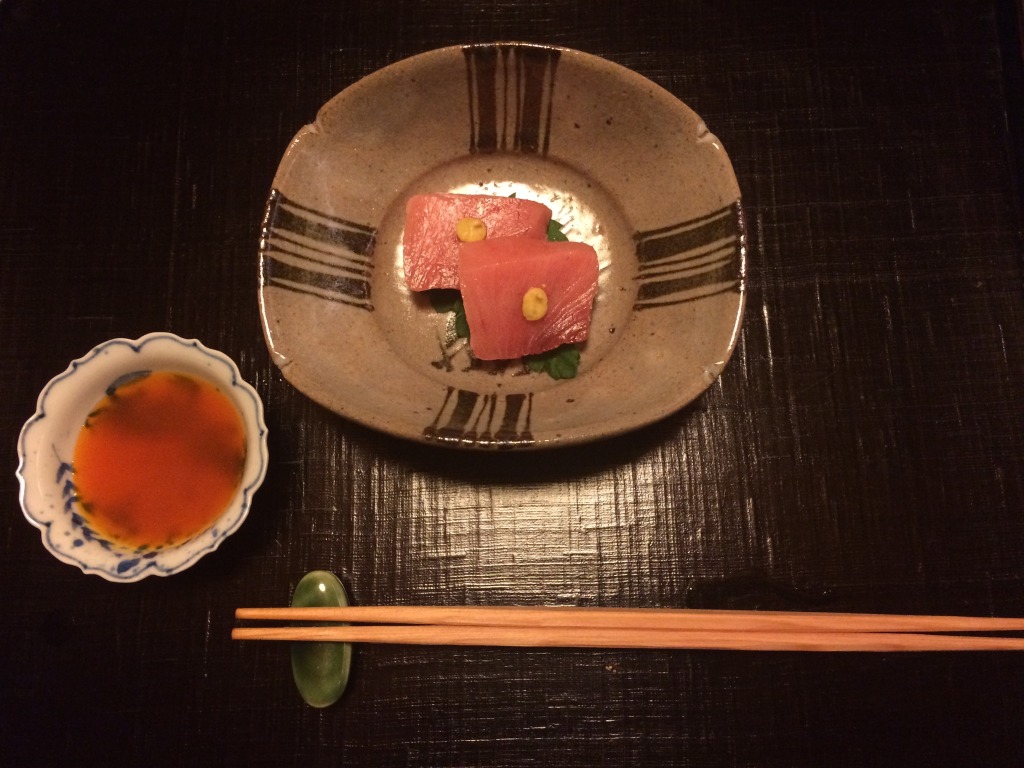 Since kaiseki also reflects the Japanese custom to nosh on a little of food, rather than devouring a large pot of stew or an entire animal, each dish is just big enough to convey the flavours, but not to fill you up. Your belly will be gradually sated by the addition of the multiple courses yet to come. Our next mukozuke was a simple sashimi dish of koshibi, a young bluefin tuna, served with a dollop of spicy mustard and a side dip of soy and raw egg yolk sauce. An adventurous preparation, but the meaty flash of the fish added a creamy rich texture as in sukiyaki. 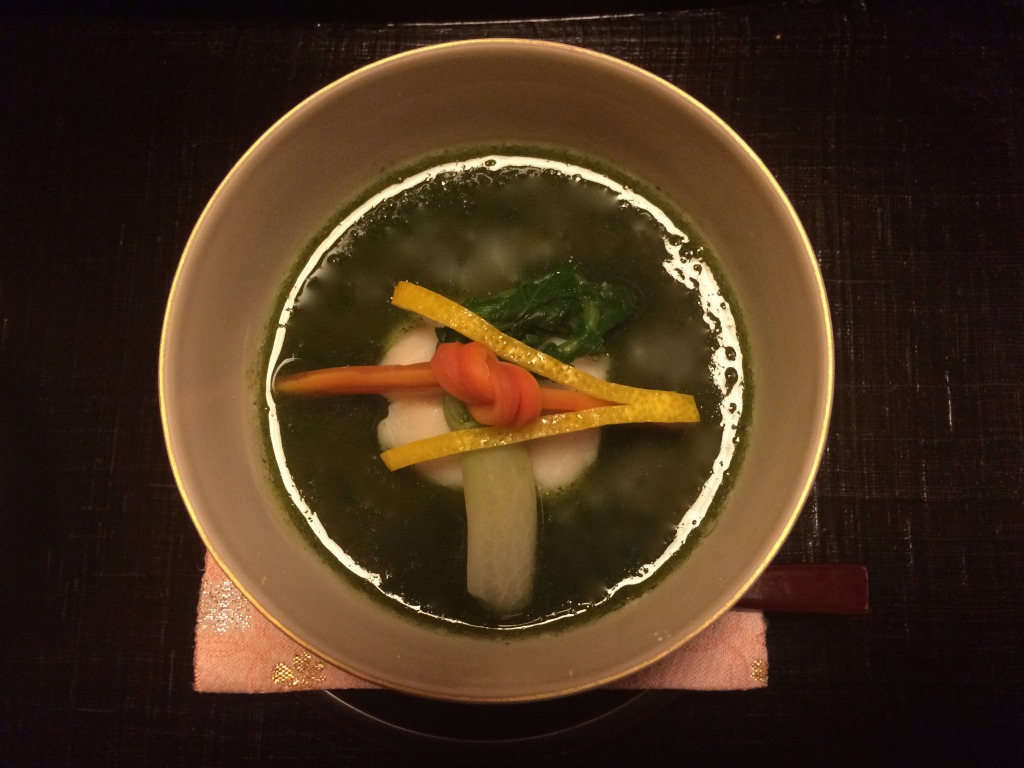 The courses started to heat up with by a lid covered Takiawase of Wakasa tilefish steamed with starchy chestnuts, millet (grain once eaten often in Japan), baby daikon radish, kintoki carrot, shiitake mushrooms, yuzu peel, in a thick green chrysanthemum sauce. Clean yet full of flavours this softly textured soupy dish was harmonious and soothing. 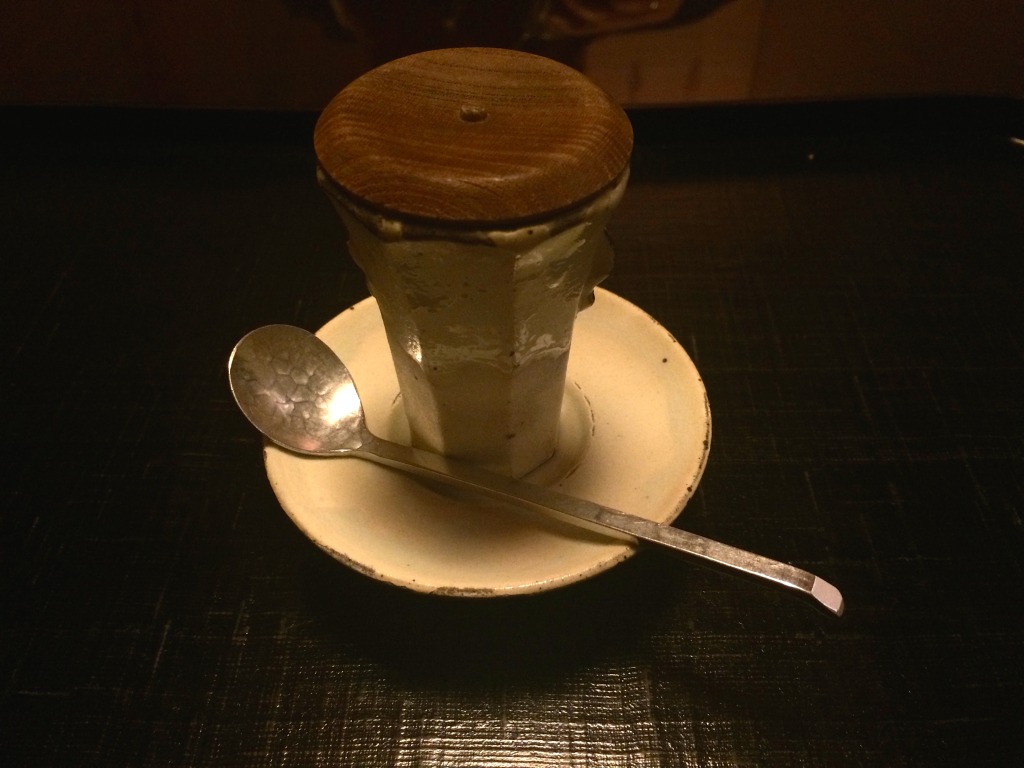 At this point there was a need for a palate refresher. The Yuzu-wasabi sorbet was a mastery of simplicity backed by scientific understanding of our taste buds. First the mellow sweetness of the yuzu calms the palate, and it is only later when kicks in the pungent spicy wasabi, cleaning out any remaining taste memories from the previous dishes. Now, you are ready for the next courses. 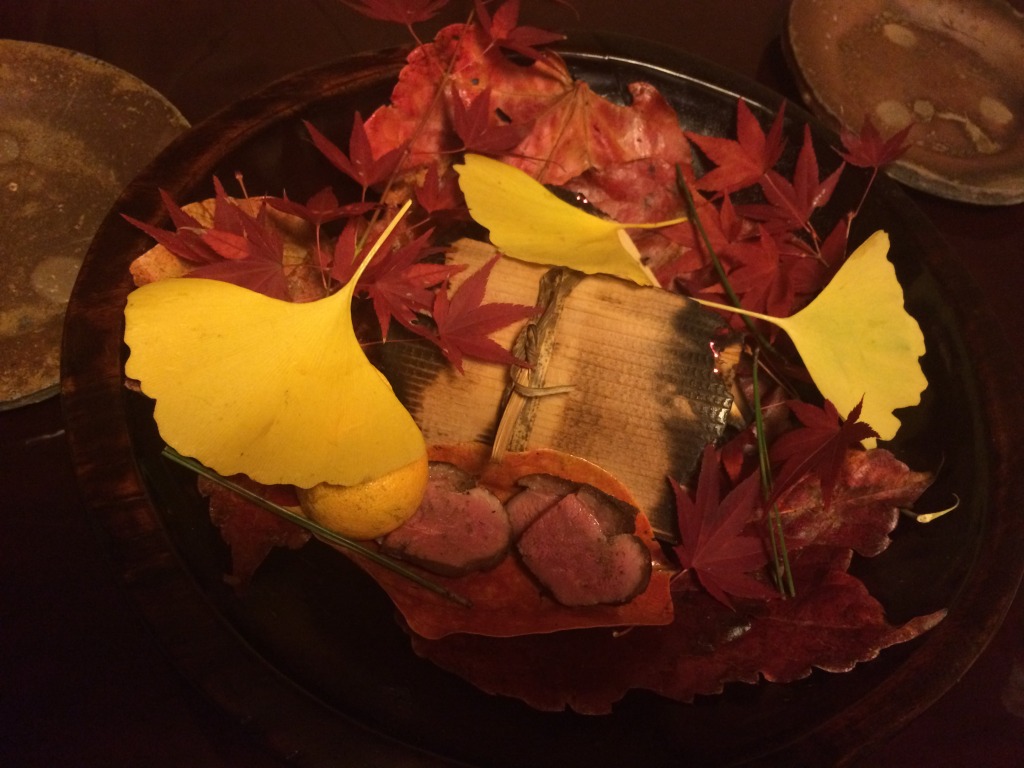 Visual appeal of a kaiseki meal is as important as its taste and quality, so the chef selects accordingly the serving dishes and constructs a theme typically evoking nature and how the ingredients integrate in it. Concealed under the golden vibrance of ginkgo and the fire-red hues of the local five-fingered maple leafs was an almost invisible Barracuda fish grilled and wrapped in cedar, nesting next to it were tiny slices of medium-rare duck breast grilled with sansho pepper, and aside candied walnuts in a small bowl to add sweetness if needed. This Yakimono, or grilled dish, clearly stated that fall had arrived. 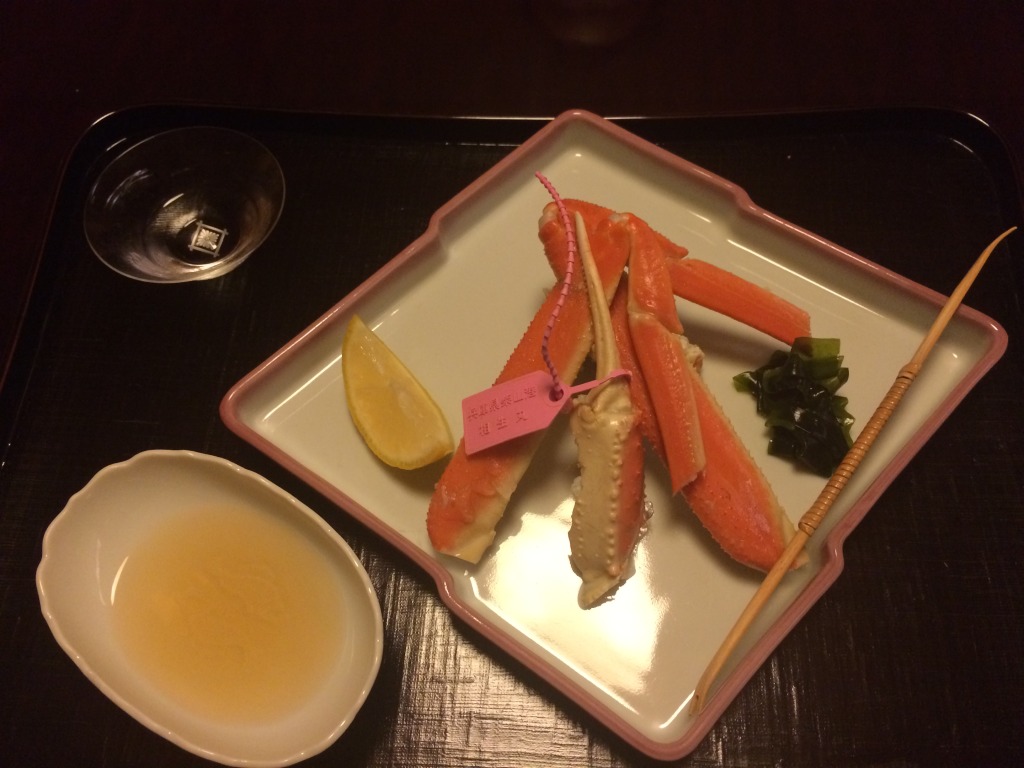 Snow crab (matsuba-gani) is highly praised in Japan, with its season starting in November, the chef served this long-legged king of crabs boiled with its shells neatly cracked so its delicate flash could be easily pealed out with an assorted bamboo stick. The chef Murata sources this crab from Tottori Prefecture on Honshu, known for the best snow crabs in Japan. Its juicy and sweet meat is best eaten with a simple sauce such as the yuzu juice pictured above. 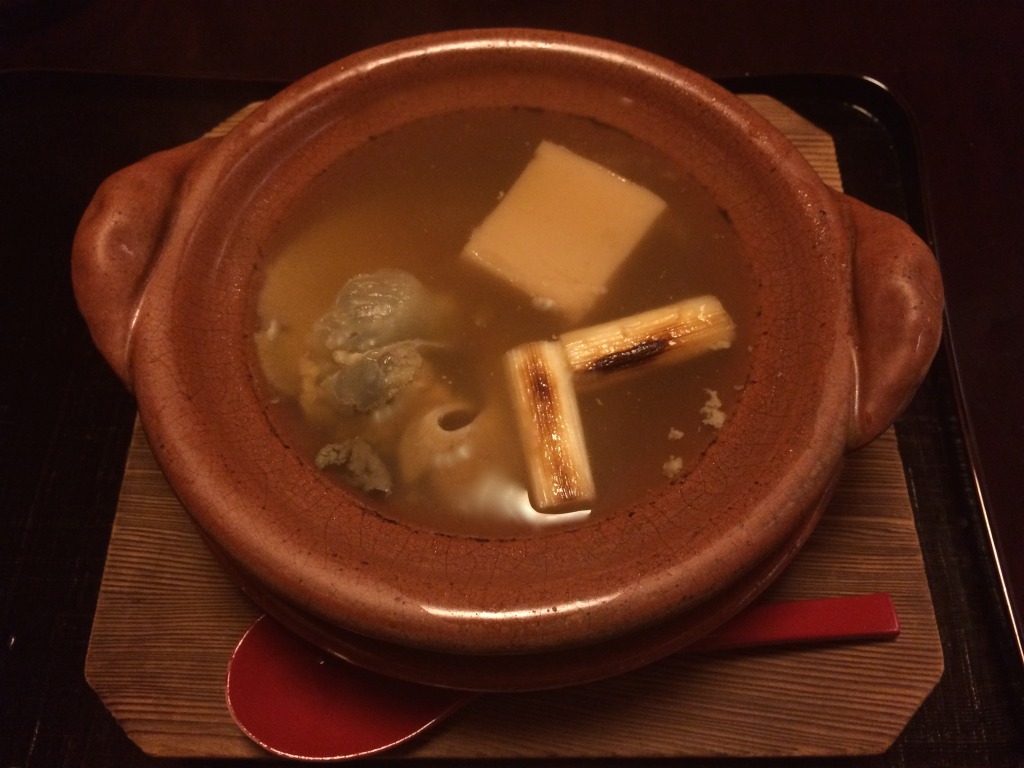 Surely the most challenging dish for a westerner was the Shark’s fin & turtle hot pot at Kikunoi. My first encounter with turtle meat was not a love at first sight, but the crunchy, almost squid-like texture of the shark’s fin was interesting in its purity. My husband noted though that he enjoys is much better with a richer sauce or spices as in Chinese cooking. I chewed through this Futamono, a lidded substantial dish,  but welcomed the next and final savoury course – the Gohan – steamed rice topped with popping salmon eggs. Served with a side of Japanese pickles (Ko no mono) and a bowl of intense white miso soup (Tome-wan), this was the filler for these, who still needed more food. We could have as much rice as we wanted as our kimono-clad server happily announced. 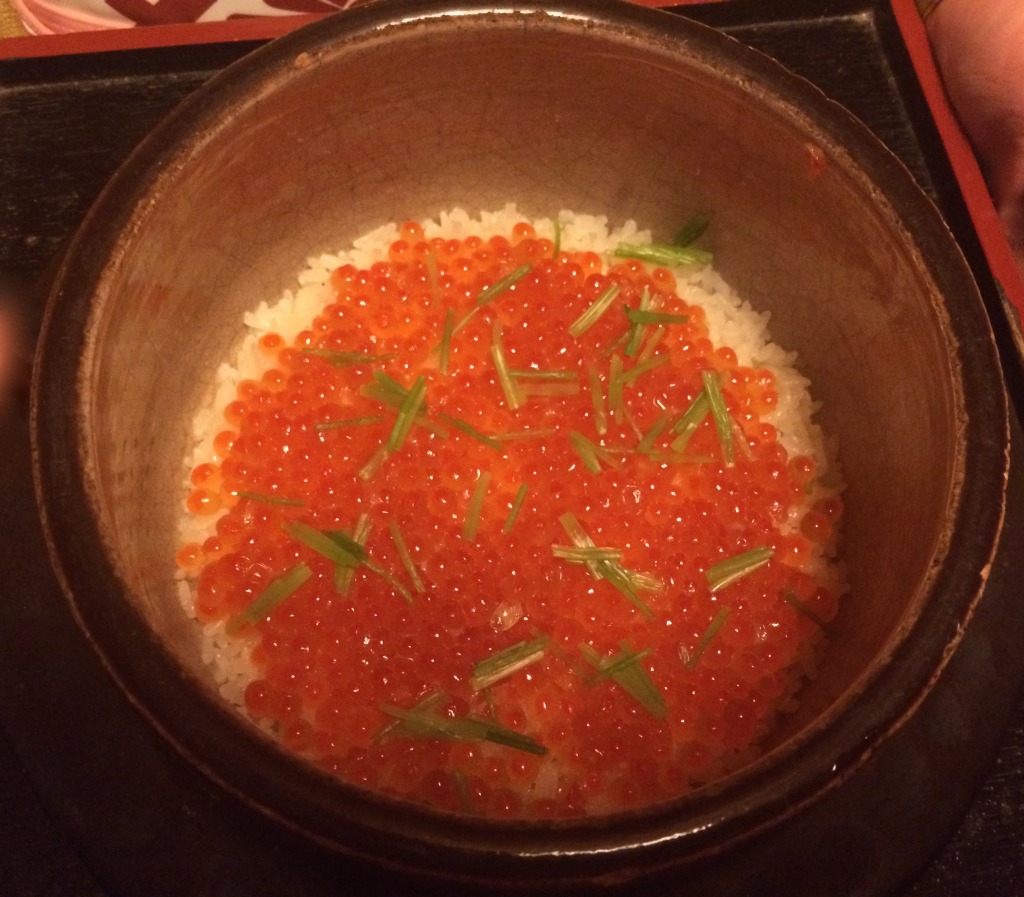 Recently, kaiseki has become more exported from Japan as its bold chefs, encouraged by popularity of Japanese cuisine once dominated only by sushi, venture to Paris and elsewhere to show this elaborate Japanese culinary art to the world. Some, like Guilo-Guilo in Paris switch to a more casual tone, while others, such as the well-known chef Okuda present kaiseki in its highly refined form. Kikunoi’s Daishiro persimmon splashed with brandy would be one of the possible dishes on their autumn menus in Paris, since the French also grow their own persimmon, known there as ‘kaki’, and it is as juicy when ripe as is in Japan. The Mizumono dessert of Sweet bean paste served to accompany our bowl of powdered green matcha tea at Kikunoi could also keep high standard of freshness when served there. 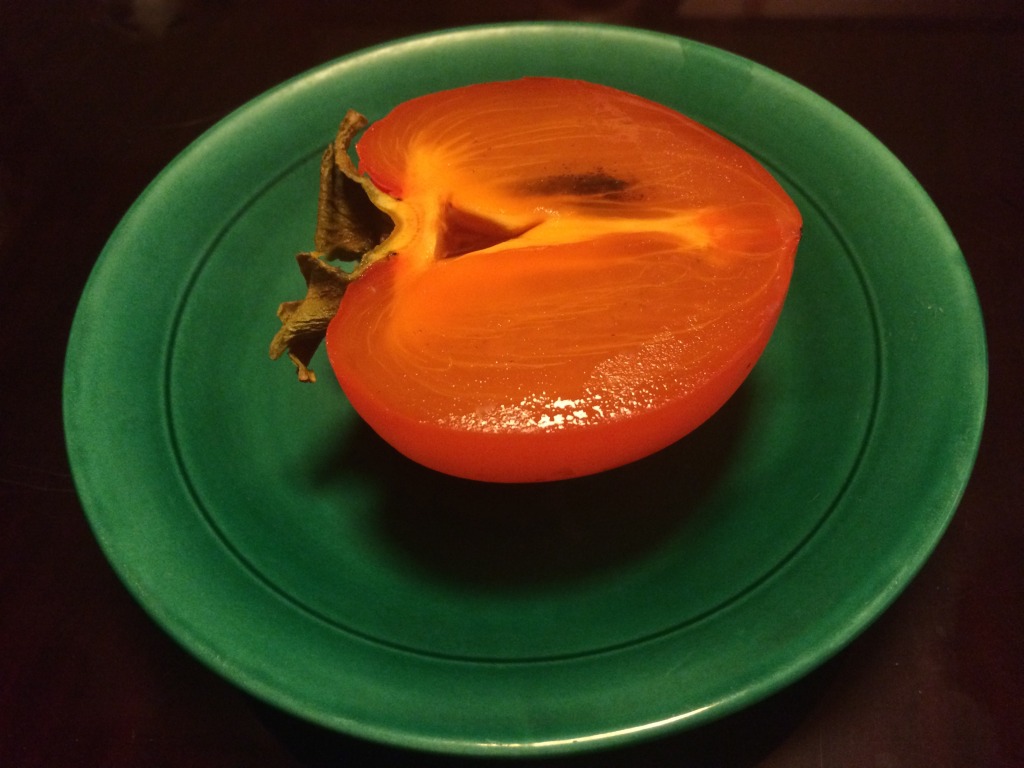 Unfortunately, these chefs abroad have to compete with the following enemies: local availability of their familiar ingredients; their knowledge of non-Japanese alternatives; presenting the potentially austere character of their traditionally Japanese degustation menu to the less-adventurous local customers. My dinner at Okuda in Paris was discouraging in the chef’s ability to transport this emblematic Kyoto-style cuisine far from his native country. Unless, someone adjusts kaiseki to the local climate, I will rather fly to Japan in order to enjoy this artful meal at its best. 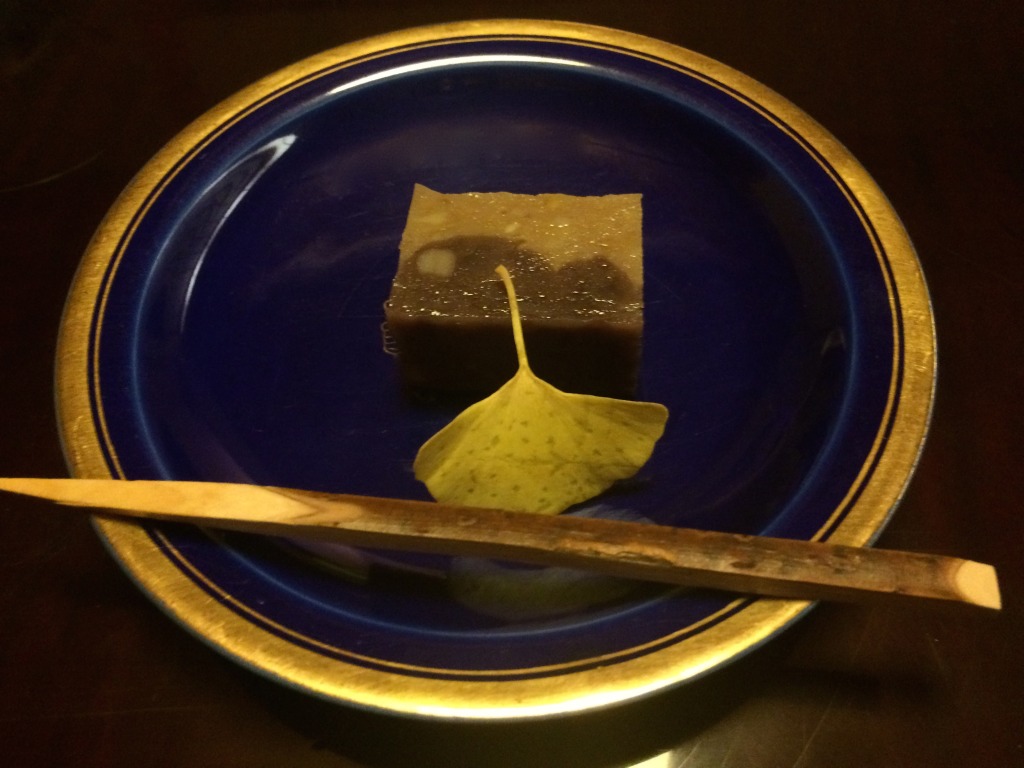 Whether you like to nibble on little delicious creations, love seasonal cooking or are curious about Japanese culture of food that evolved from the traditional tea ceremony (chanoyu), dining in one of the 11 private tatami rooms, with comfortably heated floors ( practical when you have to take your shoes off), gazing out into a traditional Japanese garden and your personal kimono-clad waitress bowing constantly while serving food and superb for Kikunoi exclusive sake, make for an unforgettable experience. 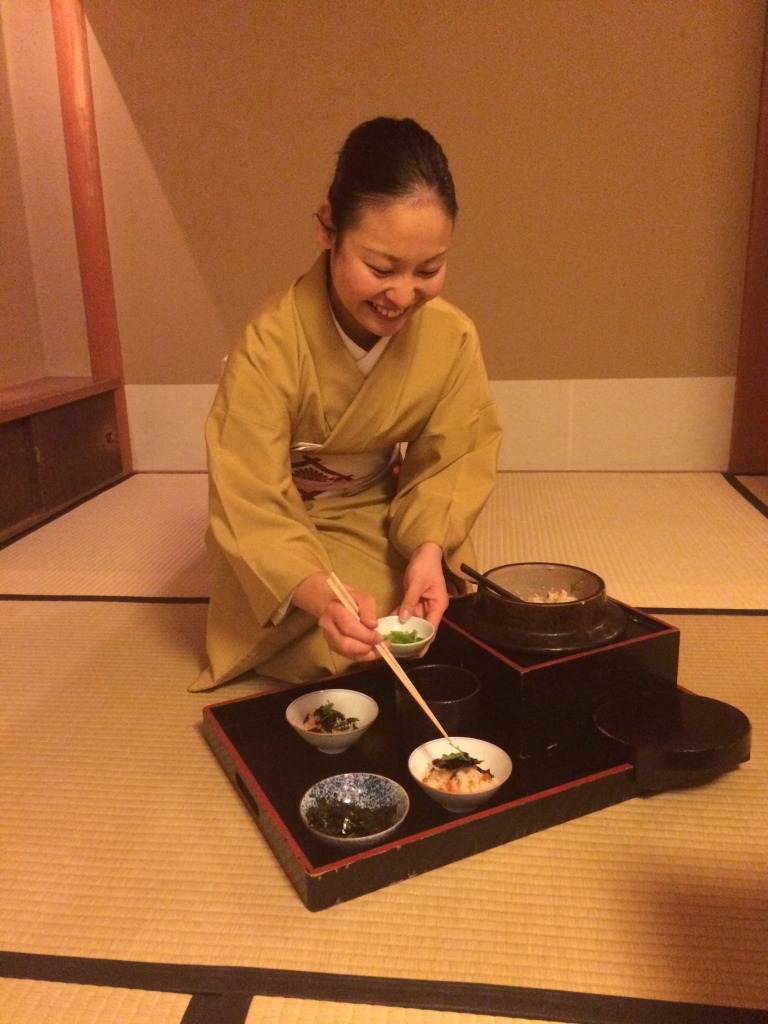 While adhering to the principles of the traditional Kyoto-style kaiseki (kyo-kaiseki), Murata is not holding his cuisine from evolving and growth, so most of his dishes are customised to our modern tastes.
You can READ MORE about KAISEKI in my article about another three Michelin stared establishment in Kyoto – Kichisen.
Address: 459 Shimokawara-cho, Yasaka Toriimae-sagaru. Shimokawara-dori, HIgashiyama-ku, Kyoto, Japan.
Contact: +(81) 075 561 0015
Opening hours: Lunch 12noon-2pm; Dinner starts at 5pm, last searing at 8pm.