Angelo Gaja was revolutionary in his winemaking approach that put the Italian Barbaresco on the premium world wine map. First, he convinced his father not to buy grapes from other growers and only make wines from the family’s estates, then he lowered the vineyards’ yields, and bottled first single cru (distinguished vineyard) Barbaresco. Later, Gaja switched to ageing his wines in small Burgundian barriques (not in traditional giant Slavonian old barrels), and now he grows international varietals like Chardonnay, Sauvignon Blanc and Cabernet Sauvignon, making globally recognised and highly scoring wines. Toppling all the controversy he has already stirred in his native region, Gaja has recently started to add a small quantity of Barbera into some of his Nebbiolos, declassifying these and some other bottles made from the grapes grown in Barbaresco only to a Langhe DOC. Gaja is a fearless man, whose innovative actions puzzle the already bewildered wine world, but he mastered selling the ‘Gaja’ brand perfectly as the sales of his highly priced wines confirm.

Visiting the Gaja winery in Barbaresco

The lightbulb in my obscure mind was suddenly lit up during my recent winery visit and comparative tasting inside Gaja’s headquarters in Barbaresco. I’ve sipped and admired Gaja’s wines in the past, but the context of the wines and the winery suddenly clarified everything about his successful philosophy and the typical Italian confusion of names found a more firm ground in my wine terminology.
And, what a building it was! Although discreet, the Gaja winery bites a large chunk of this modestly sized Piedmontese village. Perched high on a lush hill overlooking the appellation hemming Tanaro river and sprawling Northern Italian valleys, Barbaresco enjoys a naturally lofty status. The medieval stone foundations of the settlement are also attractive to human eyes. Piemonte literally means “foot of the mountain” and its geography vividly demonstrates the reasonable thinking behind this name. The Alps climb dizzyingly high on its foothills, but the mountains also roll all over the region. The limestone hills of Langhe south of Alba yield traditionally the best Nebbiolos (local indigenous grape varietal), with Barolo (geographic area) historically renown for its age-defying quality. Barbaresco caught up with Barolo’s Nebbiolo in recent decades, and the main engine behind this Ferrari of vineyards has been for almost fifty years Angelo Gaja helped by his chief winemaker for many decades Guido Rivella. Emerging modern winemaking techniques and broadened knowledge made it possible for local wines to achieve a higher and more supervised status (together with Barolo a DOCG since 1980). Striving for a more complex taste, while maintaining Barbaresco’s signature elegance, distinguishes them substantially from the more muscular Barolos. 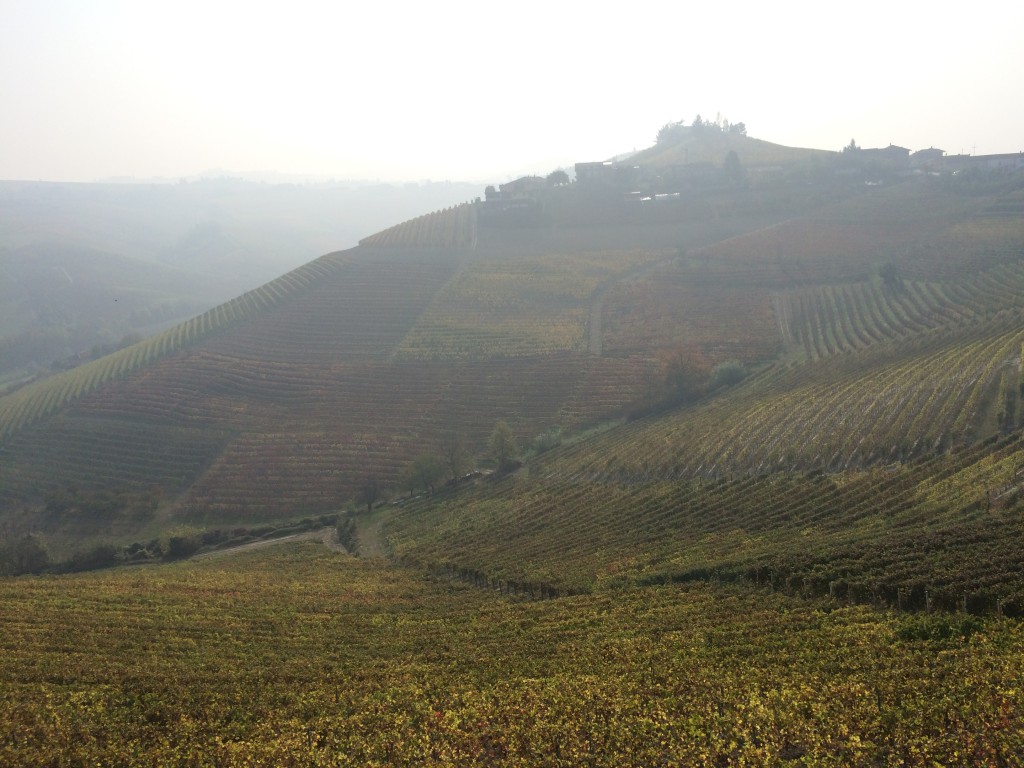 Barbaresco, like an inverted U on a map, embraces a tiny area between the substantial merchant town of Alba and much smaller Asti, known for its low alcohol, sweet and sparkling Moscato. From the Piedmont’s 50 appellations, which is more than anywhere in Italy, only five have a DOCG status (in the Cuneo province alone as the reader more precisely clarifies in his comment bellow there are 16 DOCGs in the entire Piedmont). Barbaresco and Barolo are two of the DOCG zones. The rules are slightly more flexible for Barbaresco DOCG – the maximum permitted yields remain same, the varietal Nebbiolo is the base of the wines; but the length of minimum barrel ageing is only nine months and at least 26 months in total before the release of a bottle (Reserve Barbaresco cannot leave the winery before 50 months); the minimum alcohol is lower by 0.5% vol. with 12% vol. for Barbaresco DOCG.
Gaja, ever a step ahead, has been challenging these rules since 1996, By adding some Barbera into his single estate Nebbiolo planted in Barbaresco, these wines can only carry the Nebbiolo Langhe DOC mark. He still keeps a Barbaresco DOCG in 100% Nebbiolo made from 14 vineyards dispersed across the area’s hills. Respect for an environment and supporting diversity in the vineyards are high on Gaja’s value list. He also doesn’t use chemicals in the vineyards and utilises natural compost for fertilisation. Protection of his native landscape seems to direct his steps when the motor of innovation kicks in.
The lush slopes striped by lanes of vines, that in the fall like a chameleon transform into a vibrant palate of colours, await a painter’s brush to immortalise their natural beauty on a canvas. The soil is richer and more fertile than that of Barolo, but consists mostly of calcareous clay and sand like Barolo’s la Morra. 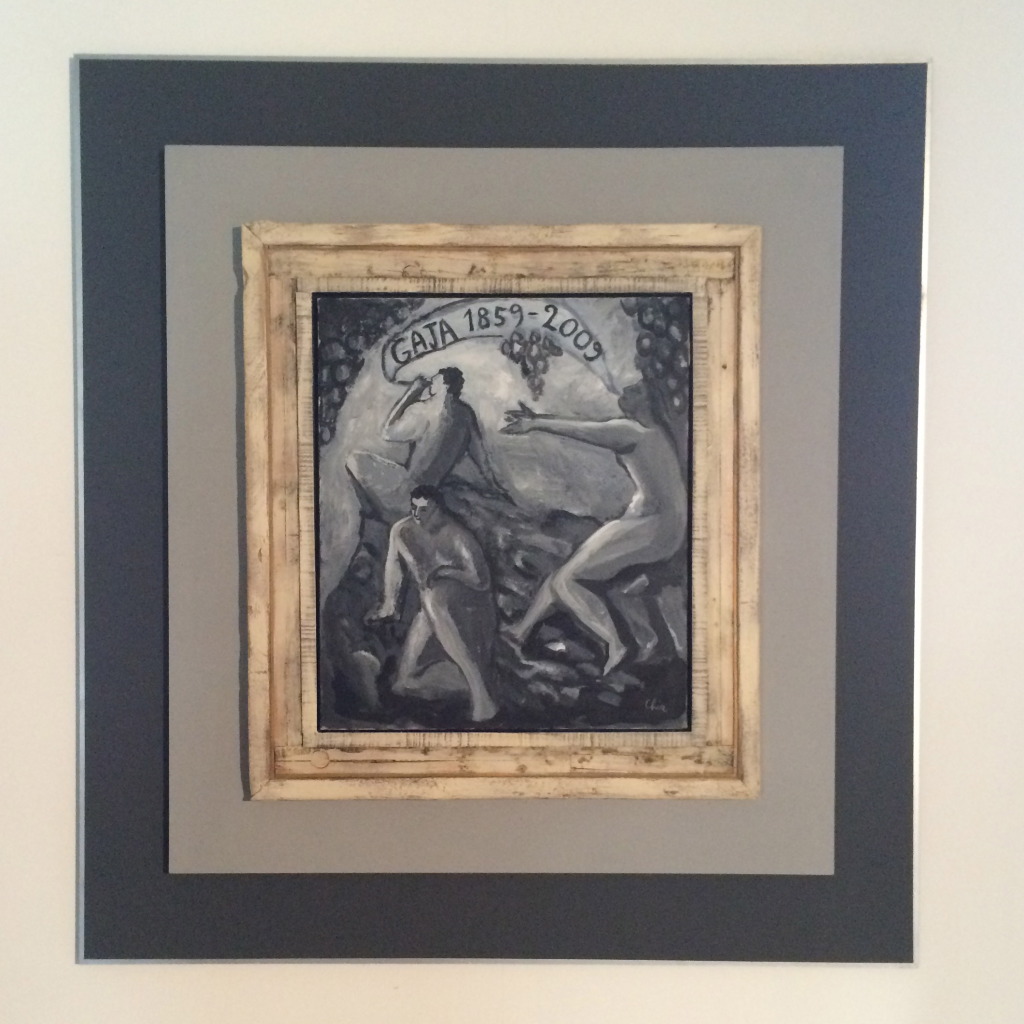 Wines made by Angelo Gaja, the Decanter ‘Man of the year’ and the most revered wine producer in modern Italy, are not hard to find, therefore it is puzzling for many consumers that his prices are so high and the wines are so widely sold? Me, together with a colorful international bunch of wine critics, enjoy Gaja’s wines, but I also often wondered at their prestige status. After all, Gaja is only the fourth generation winery, while the Antinoris, Frescobaldis, Mazzeis, Borgognos and others have centuries of vinous experience under their mighty wings. Like in France, excellence resulting from substantial investment and commitment to quality, is still being rewarded with high status of the resulting products.
Gaja is proud of his achievements, his supportive family and his admiration of art serves as his personal reward. He commissioned a number of wine or family themed paintings and collages that are displayed in a gallery inside a recently purchased building (old palazzo) across the street from the winery . 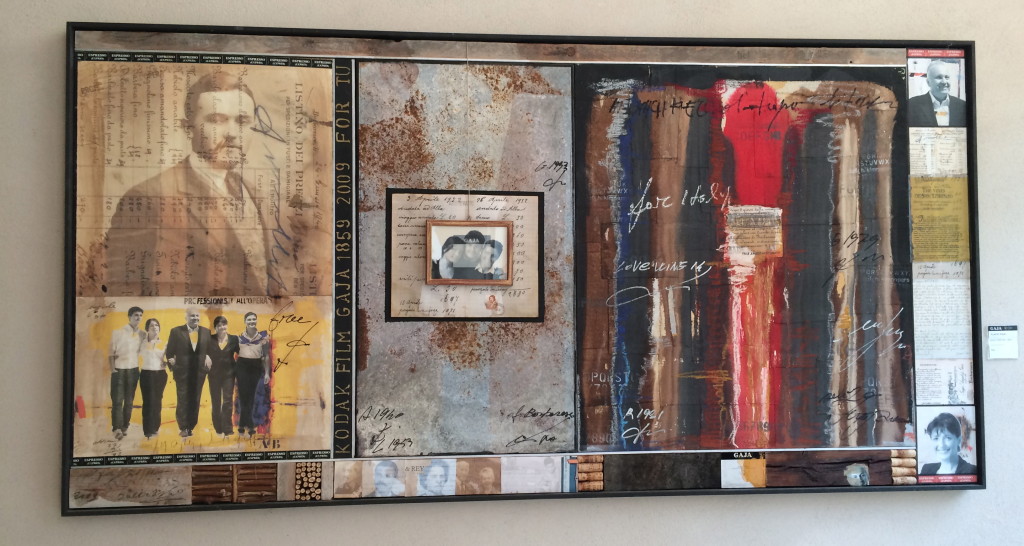 The carefully refurbished tasting rooms are set inside the old palazzo Gaja recently renovated. The dilapidating building was saved in front of the locals eyes though his effort. What is interesting is that from the outside as you stroll through the tiny village of Barbaresco, you would hardly guess what is inside, because its façade is just neatly fixed and freshly painted, but there is not a sign or anything indicating the purpose of the huge construction right in the main promenade. An underground tunnel connects the old winery with the building. The rooms designated for wine tastings are all equipped with bright modern lights and plenty of contemporary wine tasting utensils, but the beautifully painted old ceilings remain preserved to the joy of visitors (some of which might question the safety of sitting under wooden beams with holes like bullets carved by the centuries of work by worms, but I was told that they were checked by experts and found perfectly safe).
The original building owned by the Gaja family was once a small trattoria with an underground cellar, that was later included in the winery founded in 1859 by Giovanni Gaja. It is forbidden to take pictures inside the sprawling winery operations that dug deep down into the hill on which the village the village is set. The building is integrated into the village so inconspicuously that it reminds more of a Burgundy winery rather than a château in Bordeaux, which is also more common in Piedmont. 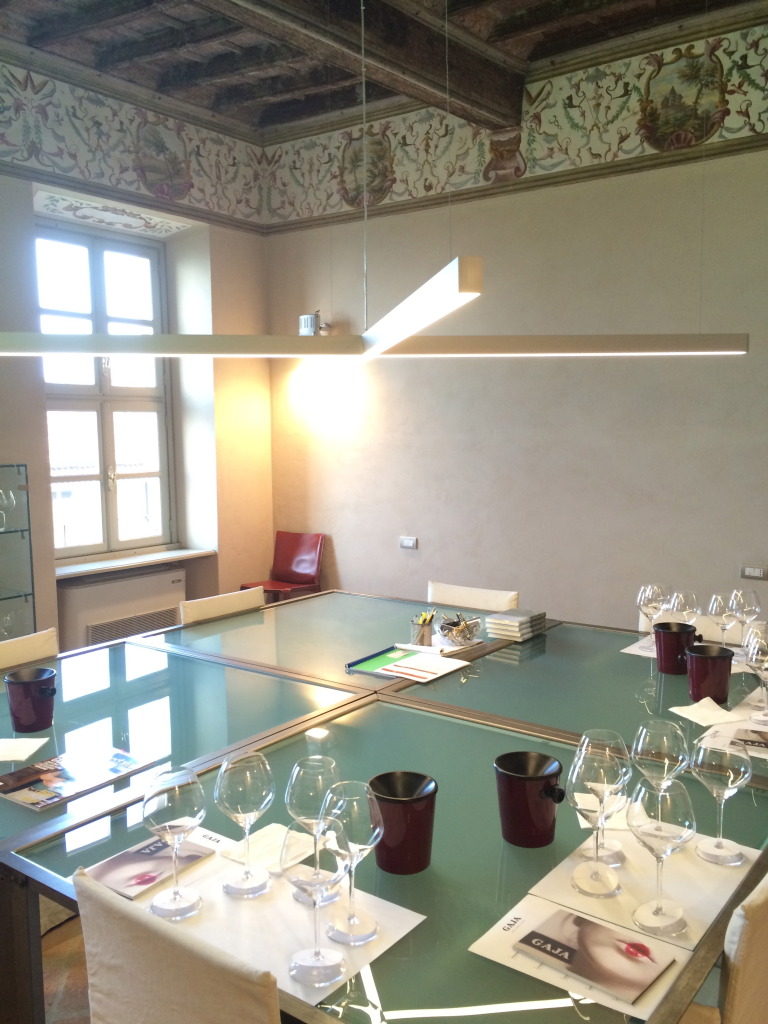 The wines we tasted were the white Chardonnay Gaia & Rey 2008, a single estate Barbaresco 2005, two vintages of Barbaresco DOCG, and the Barolo Dagromis 2010. A mixed bunch of great and more average vintages. In the past decade remarkably there were right three outstanding “classic” (source: WS) vintages: 2006, 2007 & 2010.
The first Chardonnay planted in Piedmont made into Gaia & Rey Langhe DOC was served from a magnum. Gaja has been bottling it since 1983, fermented and aged in French oak for six to eight months. Its oaky character did not shy away, while its mineral flare and good acidity predispose this wine for long ageing. Long finish and fragrant aromas tick all the boxes for high quality wine, yet to me more depth of its personality was missing.
I’ve had at restaurants the more affordable blend of Chardonnay with a small splash of Sauvignon Blanc (5%) – Rossj-Bass, also aged in oak but fermented in stainless steel, and I found it a better deal. While still priced well above most Italian wines with a similar character, I always enjoy its complex notes of flowers, citruses, honey, refreshing acidity with more less obvious oak on the nose.
Another much better priced wine by Gaja – Sito Moresco, the red blend of Nebbiolo, Merlot and Cabernet Sauvignon is also classified as Langhe DOC and picked from vineyards in Barbaresco, Barolo and Treiso. 12 months in French oak integrate these three varietals together. Red fruits on the nose and smoother tannins than 100% Nebbiolos make a pleasant companion with or without food.
Costa Russi Langhe Nebbiolo DOC 2005 – is made from a single vineyard in Barbaresco with 5% of Barbera, that will cost you up to 10times more (depending where you buy it). The vines average age is 65 years and that adds on its price. Aged for 24 months the wine is smooth and elegant already upon its release, but it benefits from further ageing as the almost 10 years old bottle we tried has proved. I was captured by its fragrant aroma and its almost silky texture rare for wines made from the tannic Nebbiolo.
We had two vintages of the Barbaresco – 1999 and much younger 2011, the later being a challenge to chew on with its mouth squeezing tannins. 15years of age benefited the older Barbaresco as the muscles of Nebbiolo were more stretched and supple. It is a blend of each of the Gaja’s single vineyards, aged separately for 12 months in oak and then for further 12 months blended together. Spices, flowers, fruits, minerality all express themselves differently each year marking the particular vintage. A high-scorer in most vintages it is a good although pricey investment worth waiting for.
Barolo Dagromis 2010 is not less bold in its youth than other Barolos and it was hard to appreciate over its muscular tannins, but its balsamic density, with violets peaking here and there confirmed its provenance from the vineyards in La Morra and Serralunga, Barolo’s best. Naturally, I am curious to try this wine after at least 10 years in the bottle. The single vineyards are aged for 12 months separately first and after blending additional 18 moths as the Barolo DOCG rules prescribe. 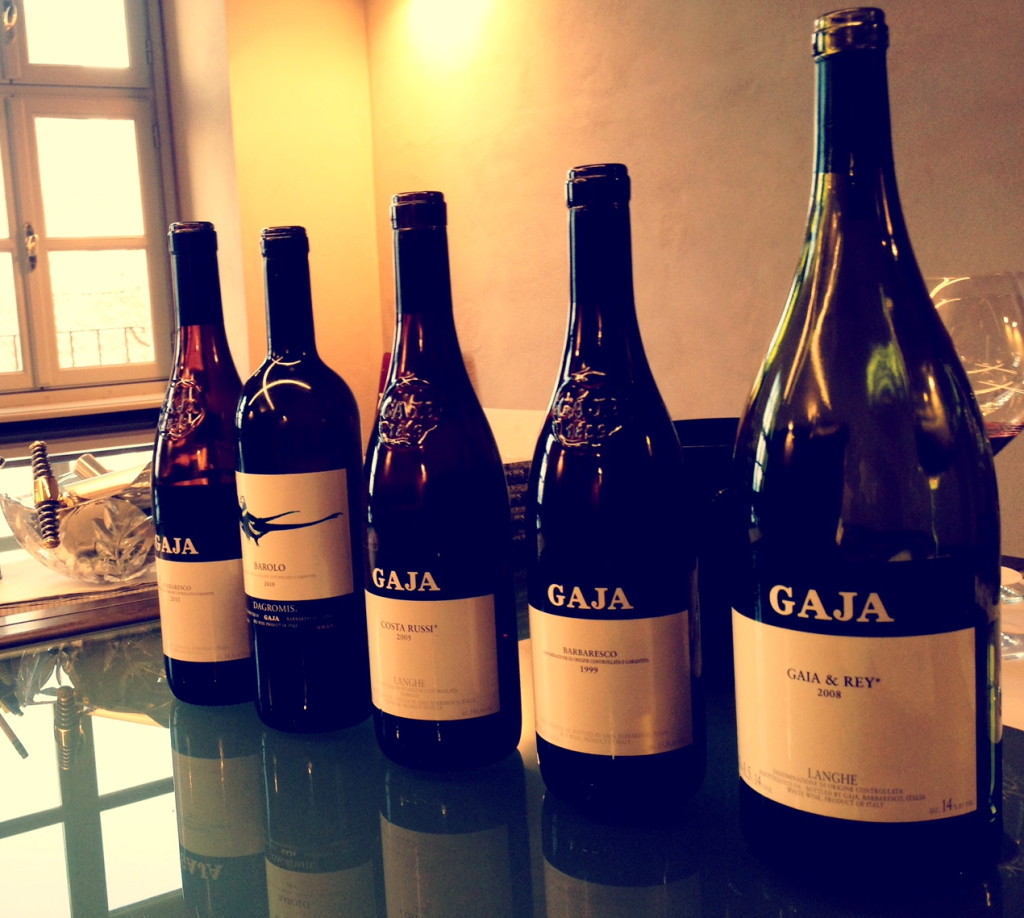 In the 1990s the fourth generation Gaja expanded well beyond the Piedmontese borders with two wineries in Tuscany (in 1994 in Montalcino, in 1996 in coastal Bolgheri he established Ca’Marcanda). These wines have shown growing interest from the wine consumers, and they are naturally different from his well established production in Piedmont. Still in his 70s the always smiling producer shows serious commitment and no shortage of energy as he drives every week (sometimes a number of times) to check on these new ventures. His charisma has had a valuable imprint on many of the importers, sommeliers, chefs and expert writers he has met in person over the 50 years of his hyper-successful career, but ultimately it is the liquid yield of his effort that counts and continues to impress wine drinkers around the world.
Soon it will be up to the fifth generation, the three children of Angelo (two daughters Gaia, Rosanna and the youngest son Giovanni), to keep the high-paced standard of the Gaja’s wines in the increasingly competitive world of wines rolling high.
Gaja, 18 Via Torino, Barbaresco (CN) 12050
+39 173 63 52 56