The family-owned Heitz Wine Cellars winery in Napa Valley, has been around long before the limousine tours arrived into this sunny Californian region. More than a half century heritage in making wines in their St. Helena winery converted from an old ranch swirled it to the current of the booming 1960s and 70s, when a forceful tsunami of serious wine producers hit the area. Many of them are now well-established names in the American wine business – from Robert Mondavi, through Joseph Phelps Vineyards, Caymus, Cakebread to Stag’s Leap – they ring loud in the wine world’s ears. Heitz Wine Cellars was one of the forerunners of this golden renaissance in California through producing top quality, globally praised wine. Unlike the “cult” wineries of the new millennium, their wines were, and most remain, more price conservative and welcoming to new, not just millionaire, customers. 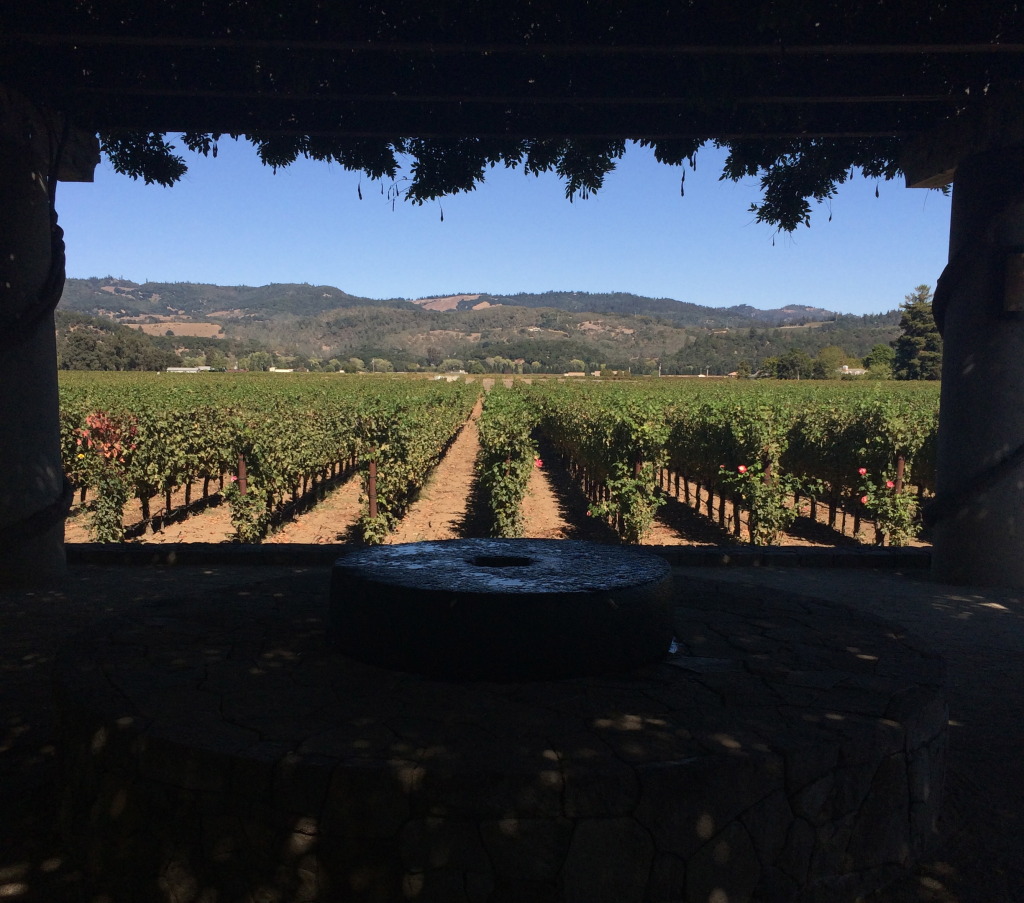 The winery’s nearby tasting room offers a lovely scenery to every visitor. Cozying up with a glass of red by the fireplace inside during the cooler winter, catching the aroma from a glass of fragrant oaky Chardonnay outside on the breezy terrace when the sun shines, or grounding to the zen of the place that streams out of a stone water fountain, might be more enjoyable than sipping wine at a wine bar. Located next to the historic Louis M. Martini winery dating back to 1922 and not far from Charles Krug Winery, the oldest winery in Napa Valley founded in 1861 by a German immigrant, the area is the most historically important in the Valley. The Heitz Wine Cellars tasting room itself is build on the location of the family’s first vineyard. 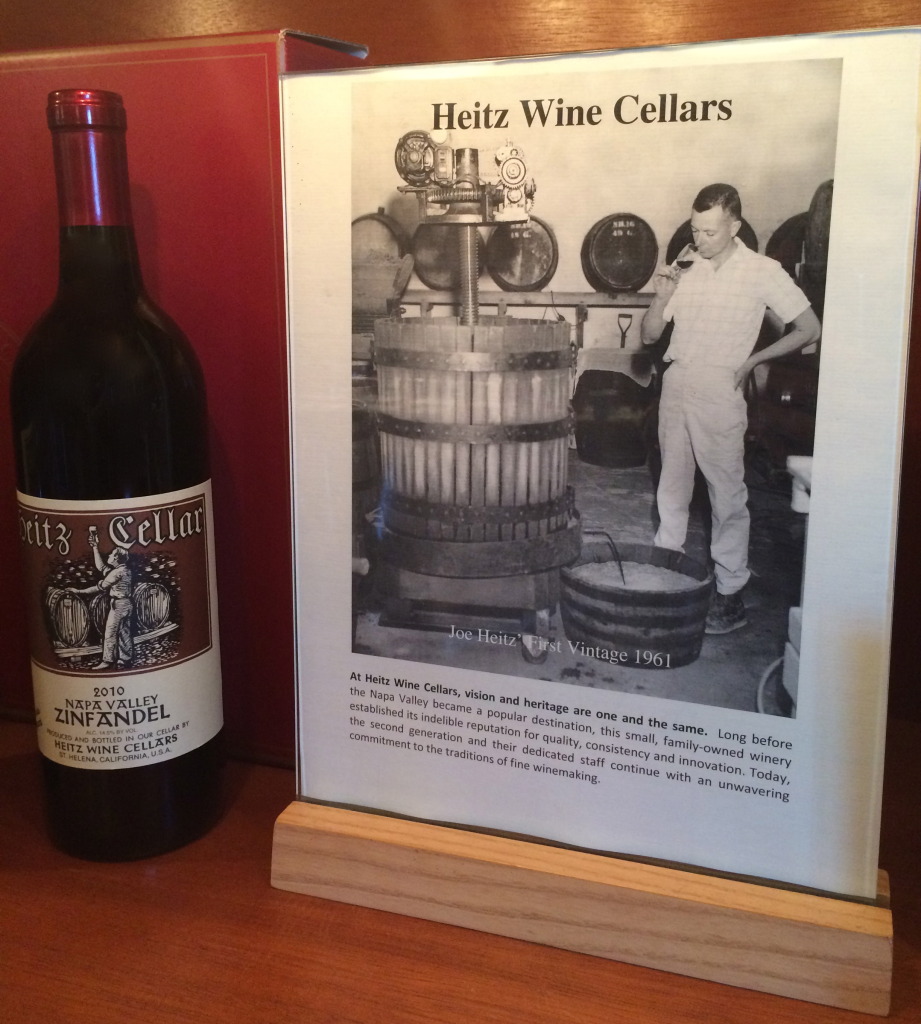 Joe Heitz started it all in 1961 with his first vintage made from grapes harvested on his ranch. I remember my first sip of Heitz Wine Cellars Zinfandel very clearly. I was in London, tasting wines during one of the Decanter Fine Wine Encounters, when my wine loving Swiss friend grabbed me saying, that I must come to taste the best American Zinfandel. And there we were, at the Heitz cellar stand waving our empty glasses on the local importer. I was grateful and I still am for this tasting, because a couple of years later it magnetised me half world over from Europe to California, to visit the winery and bring back those joyful moments sipping the succulent and fruit-packed Zinfandel as a student in London. I felt in my early twenties once again! 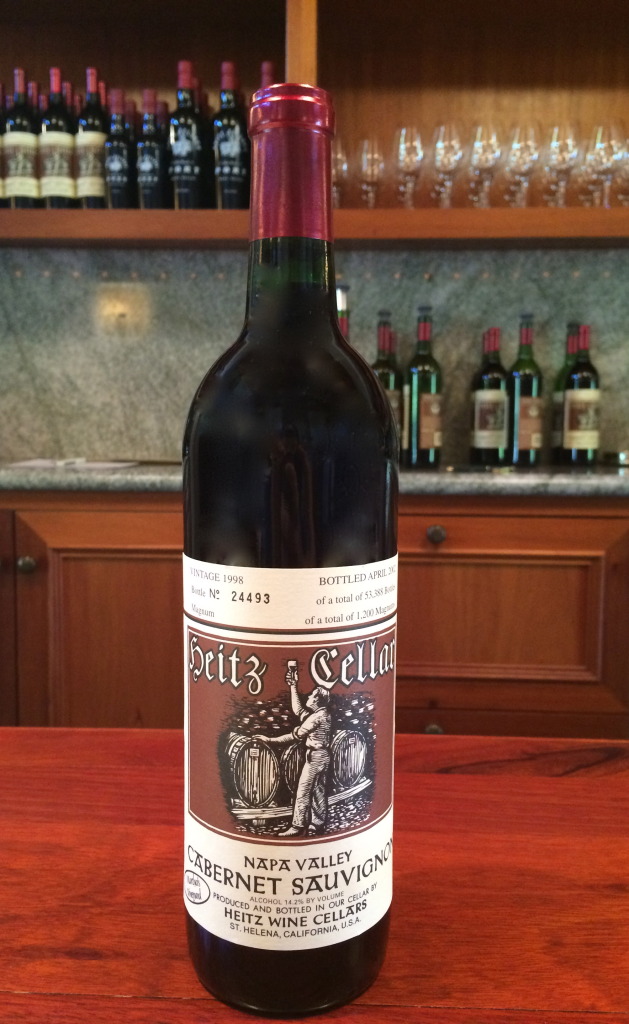 Sustainably farmed with most of their wines now certified organic, the Heitz family shows its respect to nature as well as their customers by not exposing them through their products to unnecessary pesticides, excessive sulphites and other potentially harmful chemicals for their health. The bugs are usually seduced by the beautiful rose trellises planted at the edge of each vine lane. Owls and lady bugs also help to naturally control the pests. The winery is also open to new technology and uses GPS to manage the vines and precisely assess their needs. You can learn more about their farm practices on their website. 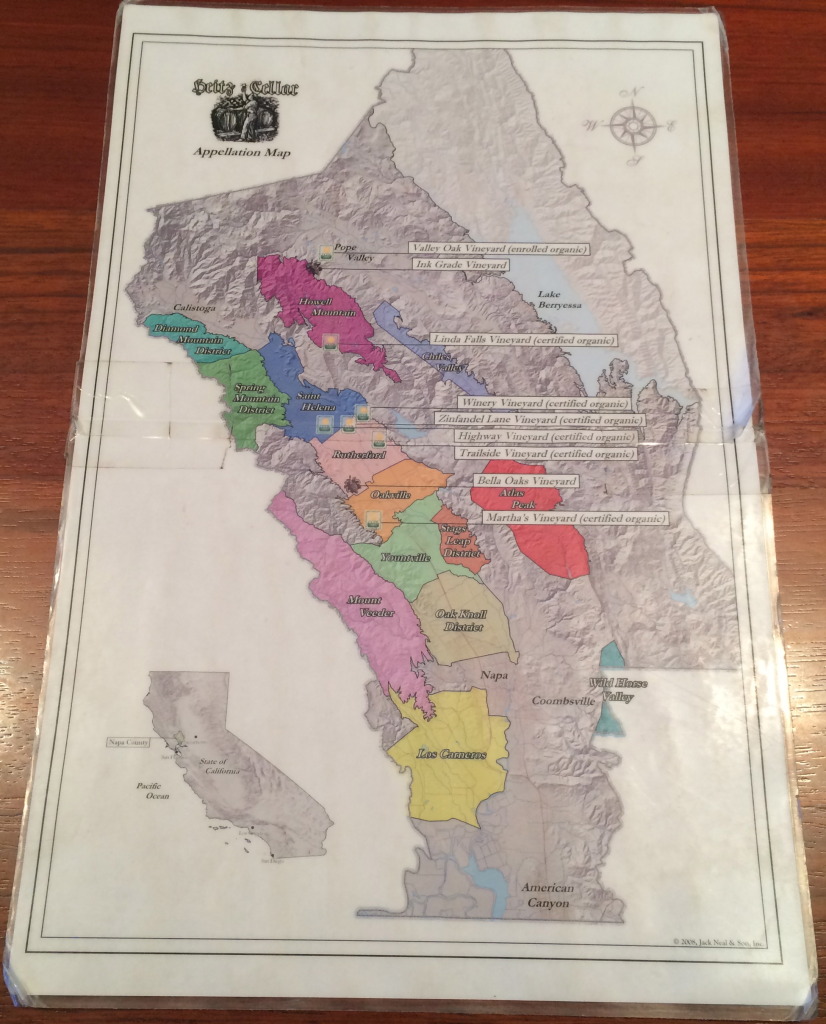 You can see all the vineyards under the Heitz Wine Cellars coverage on the map above, they span across six appellations:

Their Napa Valley Cabernet Sauvignon is a pure single varietal blend of various family estates and has been in production since the beginning in 1961. The lesser known varietal grown is Italian Grignolino, the California distinct Zinfandel (DNA tests revealed it to be related to the Italian Primitivo), alongside the ubiquitous Cabernet Sauvignon, Chardonnay and Sauvignon Blanc. The winery itself is set in Saint Helena appellation in the Spring Valley, where the Grinollino was planted by the Heitz first vineyard previous owners. 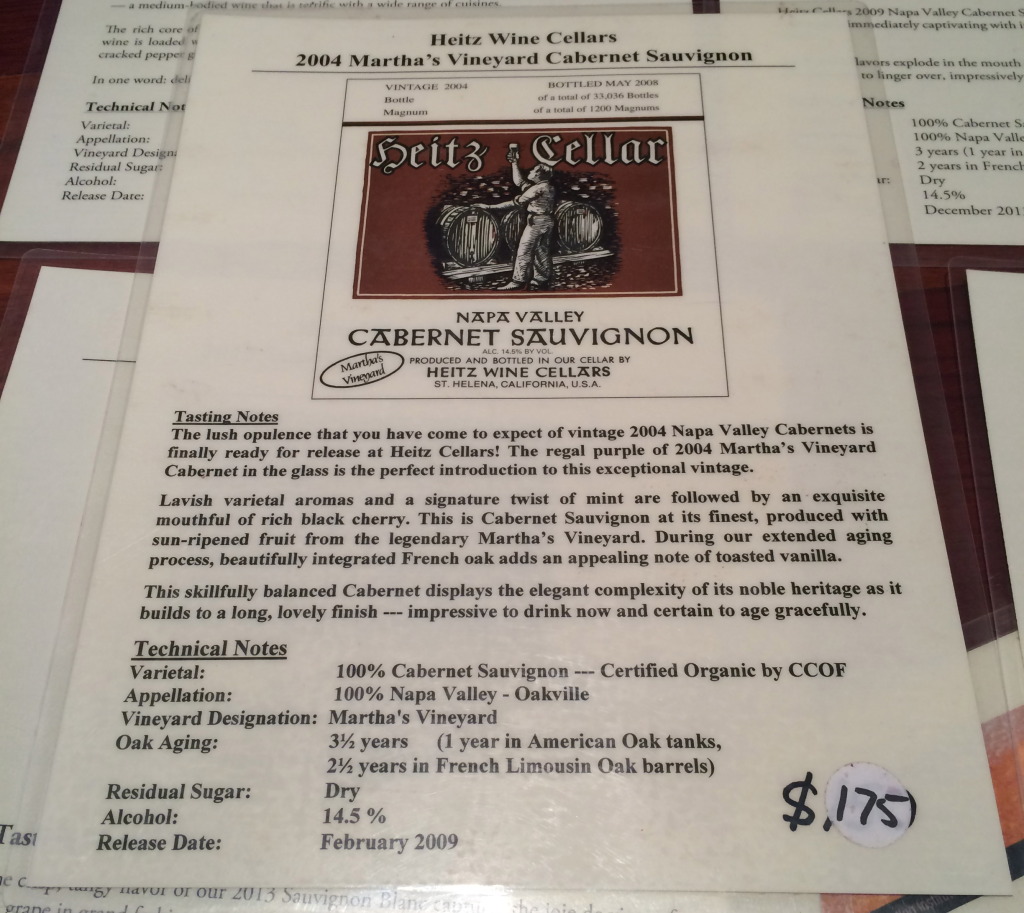 Martha’s Vineyard Cabernet by Heitz is the most praised and also the most expensive. The 2007 vintage now asks 300 USD out of your pocket for a bottle bought at the winery. The 2004 we tasted was almost half of it. The single vineyard production in the Oakville AVA, is the main pride of the Heitz Wine Cellars. Although it has been farmed by the May family, the Heitzes have always had a very close friendship with them. The vineyard bears the name of Tom May’s wife Martha. It was the first vineyard-designated wine made in Napa Valley. Aging in French and American oak for 3 and half years creates an integrated mint and black cherry aromatic wine worth ageing.
Another treasure of the Heitz Cellar is the Trailside vineyard, where their Cabernet Sauvignon grows in the Rutherford AVA. the vineyard was purchased by the Heitz family in 1984. The Ink Grade vineyard in the Howell Mountain AVA, has a long history, but it is the single vineyard Zinfandel made by Heitz that stands out for me with its medium body round tannins and plump wild berry fruit. Its volcanic soils stress the vines naturally, leading to a very small yields promoting complexity, that shows later in spicy, berry-rich wines made from the local grapes.

Some critics point out that the winery sticks to old-fashioned practices of the founder Joe Heitz, yet judging from the high sales and outstanding ratings, some wine drinkers prefer leaner, rather than the beefy Cabs of America, which I think will lose their hype as the nation will drink less coca-cola and overtly seasoned diet thus refining their taste more towards more elegant wines.
The tasting at the winery is possible without appointment and is free of charge. If you buy some wines, you can be treated to some special wines to try. Mostly though these will be newer or more abundant vintages, but you can purchase some older labels at the tasting room’s shop.
Its cosy setting with a fireplace, a fountain on the terrace overlooking the vineyards and friendly staff, casts a visit of the Heitz Cellars on everybody’s list when trailing through the Valley. Joe’s children Kathleen Heitz Myers and David Heitz are now presiding (Kathleen) and making the wines (David), continuing so his father’s heritage. It was David in 1994, who masterminded the now popular fortified red wine, that was not my personal favorite, but the locals seem to love it and you might as well come and try it yourself.
436 St. Helena Highway, Saint Helena, CA 94574-9537, United States
+1 707 963 3542
Daily 11am – 4:30pm