Making genuine wines remains the philosophy of the Bartolo Mascarello winery, no matter what modern technological advances can facilitate, the belief in by generations proven winemaking approaches involving mindful observation of nature and its cycles remains strongly emotional affair for the Mascarello family.

The late Bartolo Mascarello was not just a classic Piedmontese winemaker, but also a gifted artist. Alongside Mascarello’s impeccable long-ageing wines, he was celebrated for his self-designed labels, some of which did not shy away from controversy. His creativity and boldness earned him praise from many other Italian winemakers disproving of an innovation driven purely by temporary sales, when wisdom gained through generations of an ancestral work was plainly disqualified. The winemaker’s controversial wine label carrying the revolting slogan: “No Barrique No Berlusconi“, still animates the grey brick wall of Giuseppe Rinaldi, another devoted veteran of Barolo. 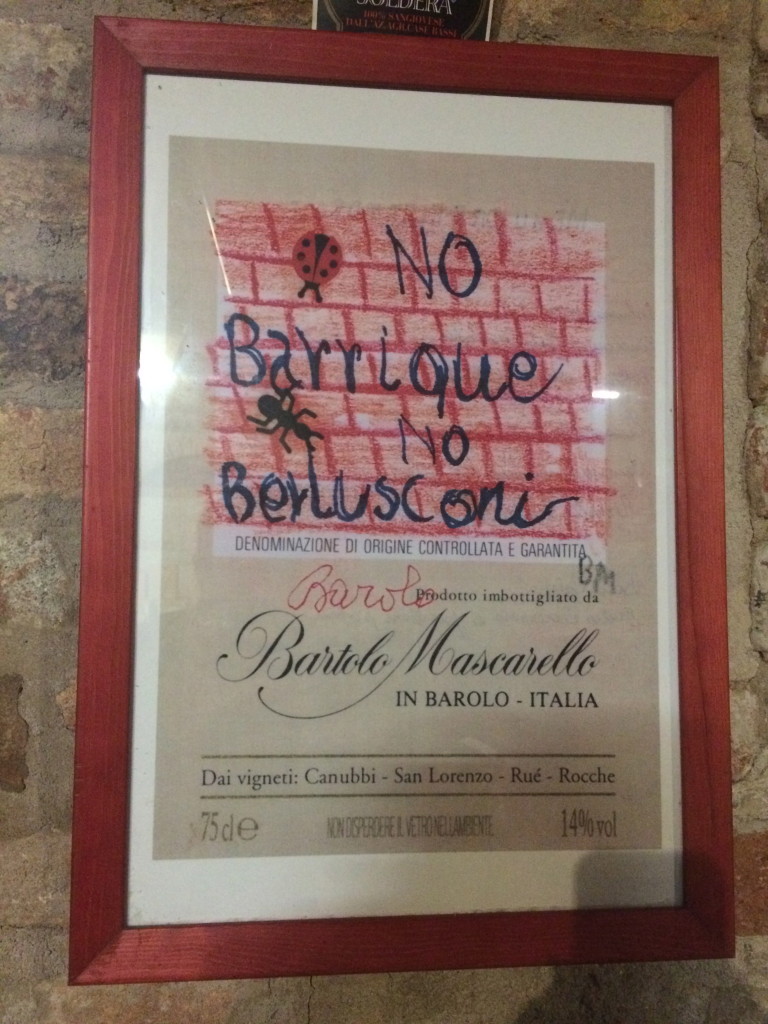 And, like Rinaldi until recently, he made only a blended Barolo, despite having holdings in such prestigious vineyards as Canubbi and Rocche di La Morra, that could attract the modern winemakers to bottle them separately as trendy, single vineyard, wines.
The winery’s Nebbiolo is grown on these four vineyards: Canubbi, San Lorenzo, Rué (in Barolo) and Rocche (in La Morra). The blending practice though follows a traditional belief that the most balanced and complex Barolo is assembled with the help of each one of the different crus, as their unique qualities naturally complement each other leading to a unison of long lasting flavours. He believed, that this approach is most in synchrony with nature, so even in a bad vintage, the resulting wine will be enjoyable to drink. 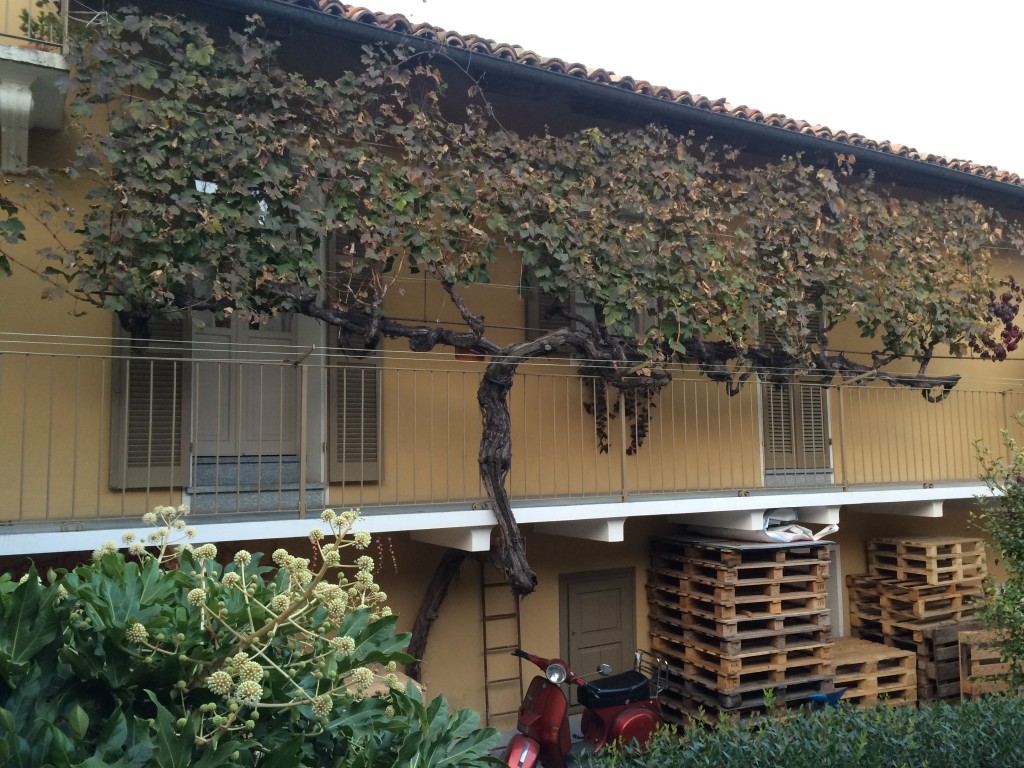 The family’s winemaking facilities are very modest by today’s standards. When scanning the demijohns scattered around a nostalgia of the not so distant old days was awaken in me as these glass jars waved tightly in straw beads reminded of my Czech father’s own in-house produce of slivovice – a potent plum spirit. Mascarello’s winemaking approach has always been down to Earth. As his ancestors have practised for decades, his faith in ageing wines in more neutral big Slavonian barrels instead of being scented with the vanilla of the small barriques, as well as fermenting with the indigenous yeasts in concrete vats without temperature control, allows the wines to be themselves and not the housewives of Beverly Hills. 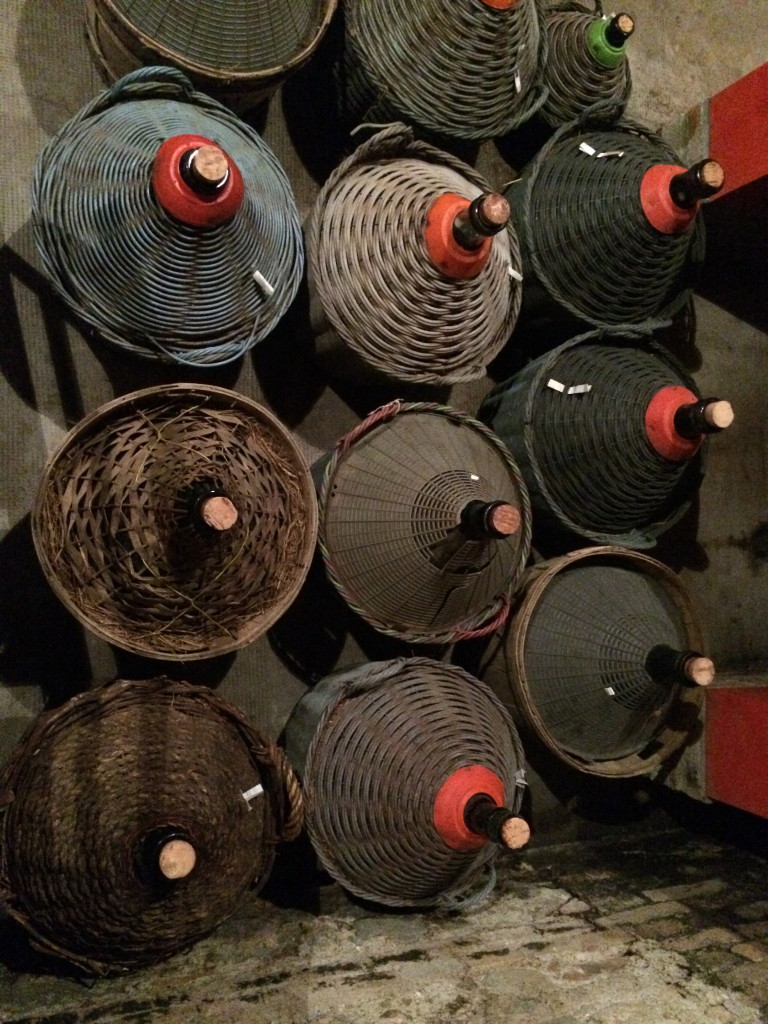 After Bartolo’s death in 2005, the winemaking naturally glided into the hands of his daughter Maria Teresa, who rigorously adheres to the traditional winemaking approach she learned along her father’s side, and that Bartolo Mascarello so fiercely defended. She is often at the winery when we visit, but the tastings are lead mostly by an erudite and outspoken American guide, who worked for the family for long enough to crack on their secrets. Maria Theresa, a petite and pensive woman took upon the challenge of creating one of the best Barolos of all time with grace. One day Maria Teresa found dozens of private sketches of her deceased father, and without hesitation she decided to use them for all future releases for as long as there will be an unused drawing available. This can be understood as a tribute to her father’s life work. Her feminine touch shows only in a greater elegance and preciseness of the wines, all of that widening their appeal to even a wider number of wine consumers. 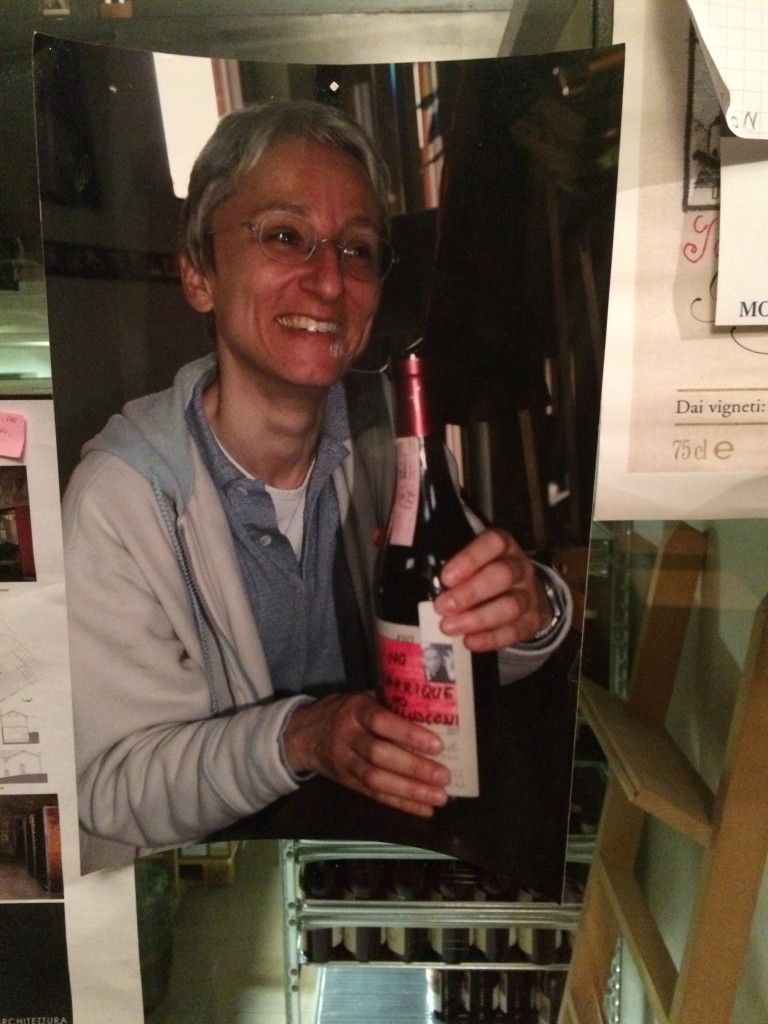 The wines made under the Bartolo Mascarello label now range from the red Freisa, Barbera, Dolcetto (from San Lorenzo, Rué, Monrobiolo di Bussia vineyards), Langhe Nebbiolo to their signature robust Barolo. The classic 2009 vintage had a better quality grapes because of cold winter, plenty of rain in spring, and warm summer that lasted well in September therefore the harvest was earlier than in previous years. The Mascarellos harvested the grapes soon enough so the resulting wine despite needing many more years to polish its characteristic rough tannins and tame its natural acidity, already displays elegance with fragrant violet aromas and a whiff of rose petals.
The Dolcetto was harvested earlier at the beginning of September as is suitable for this varietal giving fresher, youthful and juicy red wines. The Freisa is consumed mostly locally since its kicking tannins, but short lifespan make it an ideal companion to everyday meals, when freshness is what you seek. The Barbera is more complex, fruit forward, and also more suitable for export beyond the borders of Piedmont.
The Barolos require patience, not only they are not very friendly with their austere tannins in their first 10 years of life, but once they exceed 20, 30 or 40 years, they need to be tasted with care and respect as they evolve from one hour to the next. These are indeed character wines requiring patient pondering and understanding. 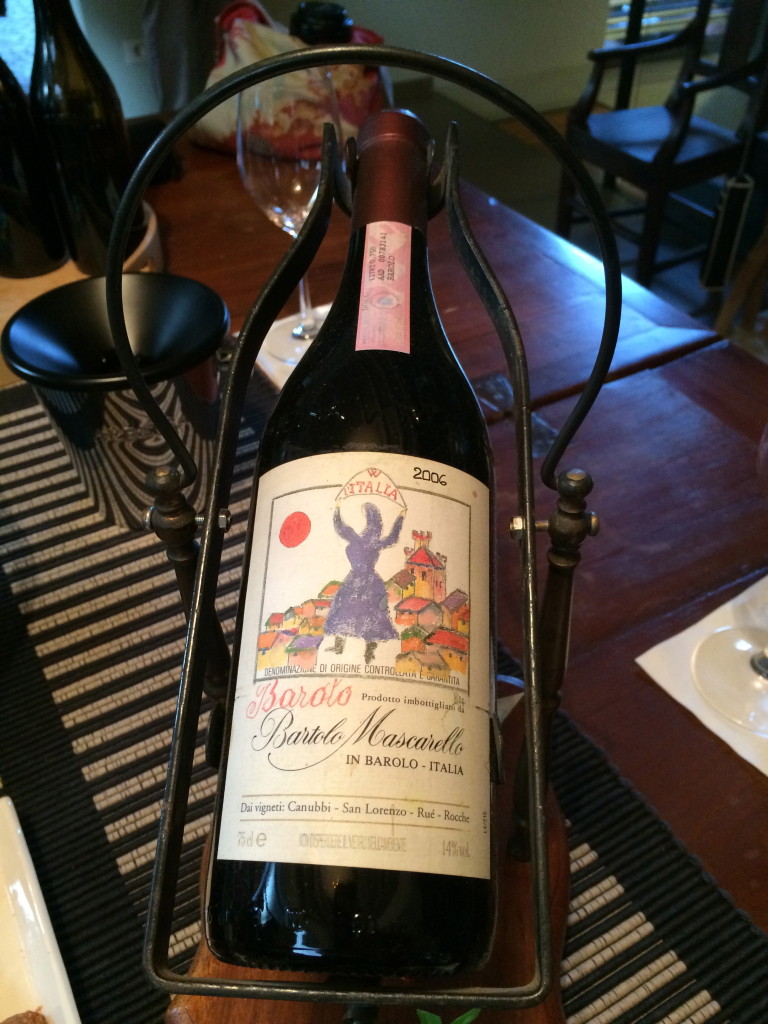 Making genuine wines remains the philosophy of the Bartolo Mascarello winery, no matter what modern technological advances can facilitate, the belief in by generations proven winemaking approaches involving mindful observation of nature and its cycles remains strongly emotional affair for the Mascarello family.
Tasting is by appointment only, but since it caters only to small groups it becomes an intimate wine encounter with a traditional Piedmontese family letting the local land to express itself through the fermented juice of the local grapes.
Cantina Bartolo Mascarello, 15 via Roma, 12060, Barolo, CN, Italy
+39 173 56125.