Wine Spectator is the foremost specialised wine publication in the United States and together with a small bunch of survivors on the peak of the magazine pyramid in the world. There is no wonder then that the magazine’s plentiful wine seminars organised regularly across the country are remarkably popular and attended by many genuine wine lovers and professionals wanting to learn more about specific wines in a manner accessible to all levels of knowledge. 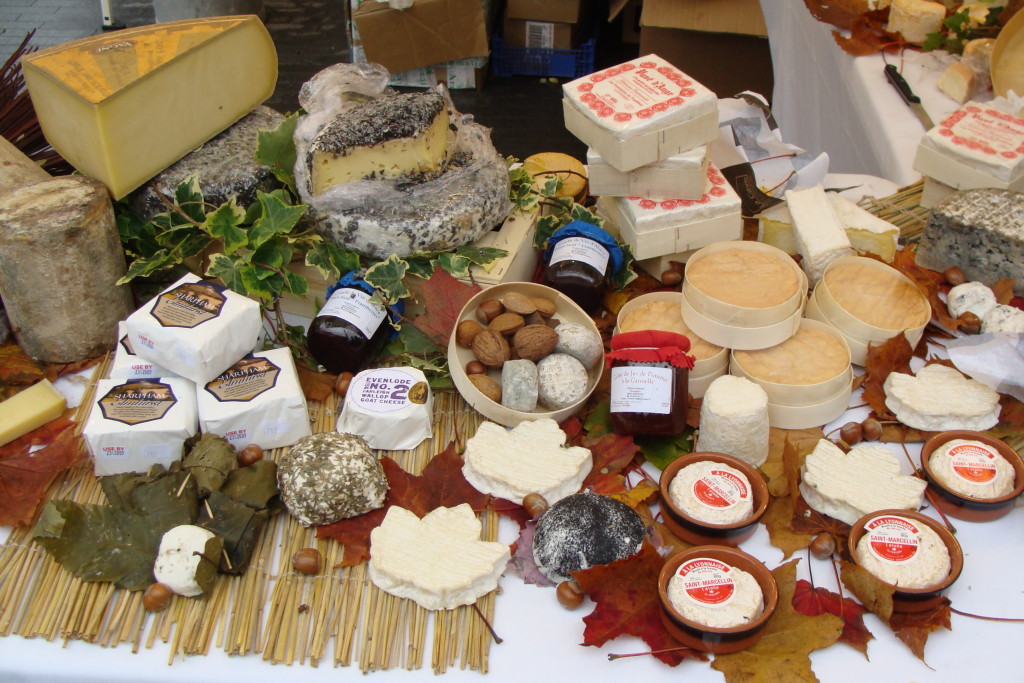 These educative sippings and talks are by no means cheap, generally withdrawing hundreds of dollars from you credit card. The selling mantra is that they are professionally run and extremely well organised, therefore an encouraging return in terms of acquired knowledge added to an access to interesting wines in almost the same scope as the tasters at these acclaimed publications, makes the expense rewarding.
During the South Beach Food & Wine Festival (SOBEWFF) in Miami the Senior Editor and Tasting Director of Wine Spectator Bruce Sanderson hosted the tastings graciously as he diplomatically avoided any negative comments, that might reflect the personal tastes of the public. He knows how diverse the individual opinion can be in terms of taste from his past career experiences as a former fashion model, then an actor that turned to a sommelier after moving to New York. In a room packed with wine connoisseurs with a varied knowledge of the subject he managed to explain necessary details the wine makers omitted, while keeping simple so a novice got an idea of what was going on in his glass of wine.

We started with tasting an elegant and complex range of champagne from Gosset. Originally founded in Ay in 1584 by Pierre Gosset makes it the oldest Champagne house. We tried six white and pink sparklers, one of which was Celebris Blanc de Blancs Extra Brut NV, the ultimate favourite of most of us Saturday morning sippers. This French beauty was made without a malolactic fermentation to sharpen up your taste buds with freshness. Made purely from Chardonnay with a 3.5g dosage (added sugar) and nine years on its natural lees added to its richness with honey and waxy flavours. Such depth together with the dosage softened the acidity and created a harmonious serenade in the mouth. I further learned an interesting fact about the current tendency in Champagne to use Pinot Meunier in blends less, while increasing the amount of the more challenging Pinot Noir, which is more costly for the grape growers and ultimately the Champagne makers, and can lead to even higher prices of the already expensive bubbly Champagne. Tasting it from a classic Chardonnay glass and not a narrow flute, allowed for the aromas to open up better, since a wider surface could be in an increased contact with the air. 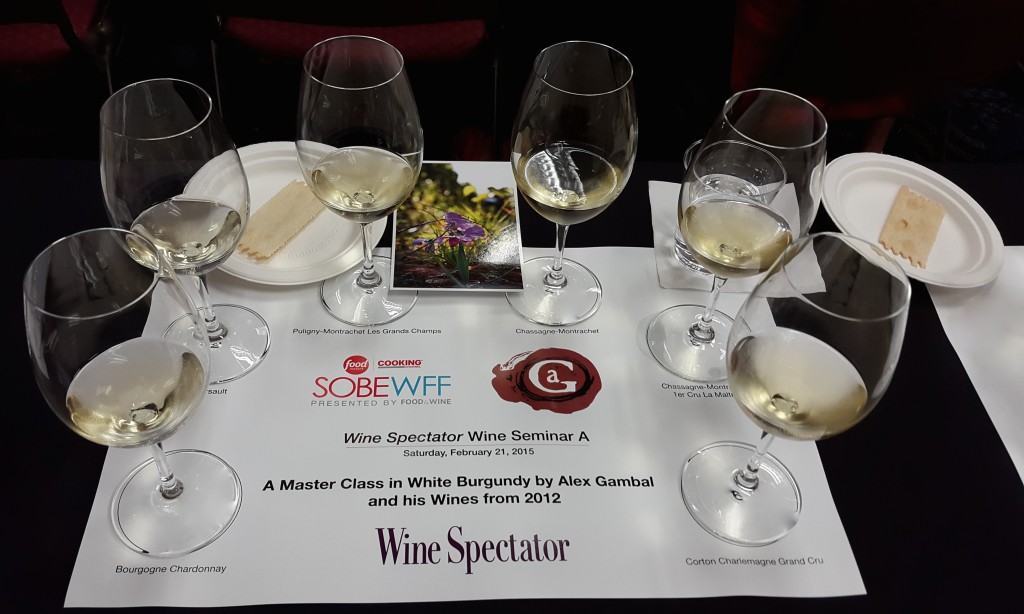 A Washington native, whose visit of Burgundy in 1992 turned his career in real estate around, Alex Gambal, moved in together with his family and founded a nègotiant business and a winery a couple of years later. He was totally seduced by this praised French region renown for the best and most refined Chardonnay and Pinot Noir in the world. He brought his range of Chardonnays from various appellations in this complicated tiny region to this Master Class in White Burgundy. Without a desire to delve into intricate technical details, he described the geological foundations of the many hills, slopes and plots in Burgundy, and uplifted the importance of the vines’ exposure to the sun. Then came his biodynamic wines from which two were my personal winners. Although I enjoyed all of his six samples, the Puligny-Montrachet Les Grands Champs 2012 made from about 60-years-old vines enchanted my nose with delicate floral spring aromas underlined by a honeyed roundness. Lime followed by apricots, softly lead to a salty mineral aftertaste lasting in what seemed like an eternity. His Premier Cru Chasagne-Montrachet from the same vintage, but a different location (La Maltroie vineyard), was more intensely waxy on the nose, and had a very complex multi-layered texture showing fresh minerality of the soil but also a richer aftertaste with long-lasting hay intensity. 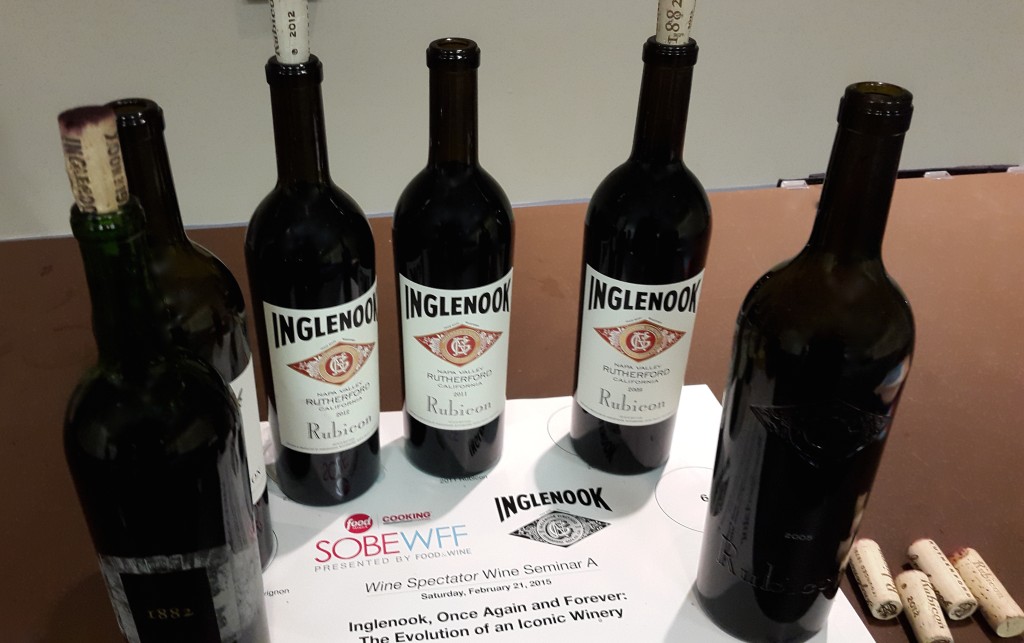 At the end the managing Director and Winemaker at Inglenook Philippe Bascaules took the reign. While over a decade working for the wonderful first growth Bordeaux Château Margaux, radiate respect for his work, I could not find much elegance and beauty in the harshly tannic Cabernet blends, that he since his 2011 arrival in California has been trying to polish up. The seven red wines we tried were made at the historic Inglenook winery now owned by the distinguished film director Francis Ford Coppola. Rubicon, a Bordeaux blend, being the flagship pride of the estate. Too aggressive, ripe and despite going back as far as to 2005 vintage the alcoholic jammy expressivity shocked me rather than charmed with elegance. Perhaps 10 more years in the bottle would surprise me. 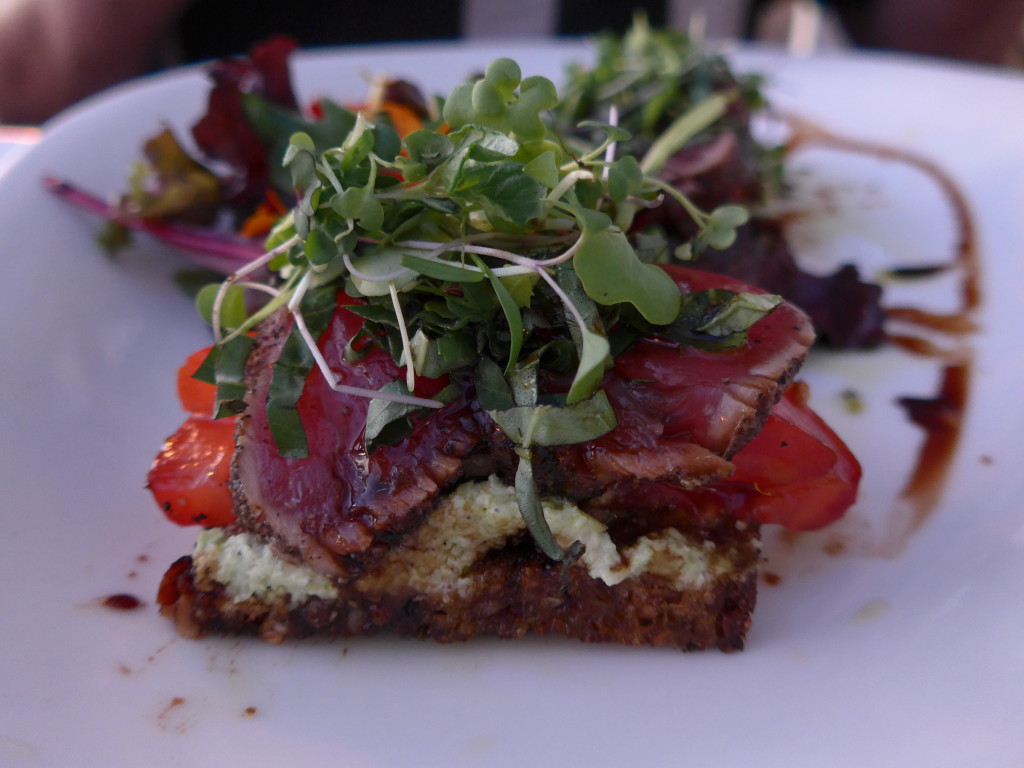 On the positive side of the palate, the delicious wraps and salads served to the attendees of the seminars before and after each session, bounced my by-harsh-tannins-irritated mouth back to its equilibrium. The old truth about wine confirmed itself once again: good food on its own is great, good wine on its own is equally enjoyable, but when the two couple together – the experience is incomparable! It either matches perfectly or balances the other.