"Macrobiotics is a means to live comfortably in harmony with nature. Souen’s food approach is rooted in the yin and yang foods as was documented by Traditional Chinese Medicine."

Souen is Manhattan’s pioneer of Japanese macrobiotic dining. The first location in Soho has been open since 1971, which was later extended to another two distinctive branches, each with its own focus. Sushi takes the main stage at the Union Square location, while in the East Village ramen steam from the kitchen. The latest opening does not stop at serving just its organic ramen (nourishing wheat noodle soup) as it offers plenty of choices from naturally synced plates. 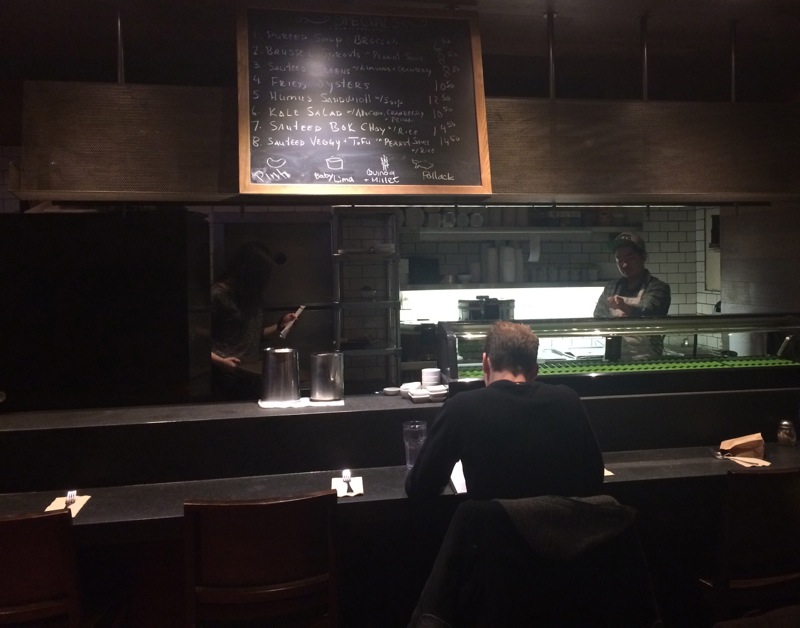 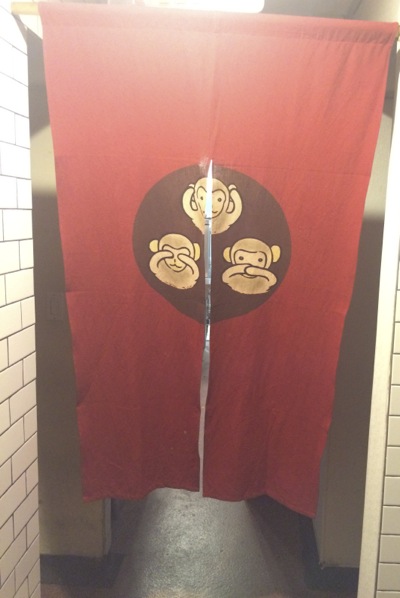 At Souen the founders are serious about your nutritional and lifestyle education. They run regular courses onsite, but also virtually on their website, where anything related to macrobiotics is explained. Since “macrobiotics is a means to live comfortably in harmony with nature“, and was termed millennia ago by Hippocrates, the Greek father of medicine, as “large, long life“, it leads to a sustainable lifestyle, mindful of the interconnectivity of the natural elements. Eating a balanced diet constructed from locally grown, seasonal whole foods such as grains, vegetables with their skins and stems, some fish and seafood, while avoiding anything processed, excessively chemically treated, all that opposes to living, organic foods, shapes the tree of life for macrobiotics follower.
Adhering to such lifestyle is not just about what you eat, since an inseparable aspect of macrobiotic lifestyle is how you eat – each mouthful should be chewed at least 30times in order to appreciate the flavors mindfully in their entirety.
Not a trend monkey, jumping from one fad to another, Souen has been faithful to its naturalist path from its opening on Manhattan. The Japanese-run canteen roots for a conscious diet, yet in a truly American way, the menus are very extensive, making the choice harder. Allergens as well as other ‘sensitive’ ingredients (gluten, soy, fish) are thoughtfully highlighted inside the menu so any concerned eaters will not need to cross-examine the waiter.
The Union Square location makes sushi rolls from brown rice, while in the East Village they serve whole wheat udon noodles or gluten free buckwheat soba and rice noodles. Gluten-free choices include their home-made Corn Bread served with apple or tahini butter. They even state on their menu: “All menu items are gluten free with the exception of: Seitan, Soba, Udon, Baked tofu and Anything Fried”. Simplified, so you know what you are eating.
Most ingredients are organic and locally sourced. In particular the ‘dirty dozen’ including soybean miso paste, brown rice, beans, tofu and some fruits and vegetables. Simple preparations are the soul of macrobiotic food. Further, the macrobiotic plate doesn’t work if we are constantly restricting, thus stressing, ourselves. Having plenty of simple choices at Souen caters to these aspects of macrobiotics. The choice from three original home-made dressings of either Carrot, Sesame Vinaigrette and Tahini Dill for each salad inspired me to order the last, most popular one, with our Seaweed salad on the side. Almost everything can be customized to your liking from the way a fish is cooked, through your side dish to sauce. The fish is either caught wild or organic. 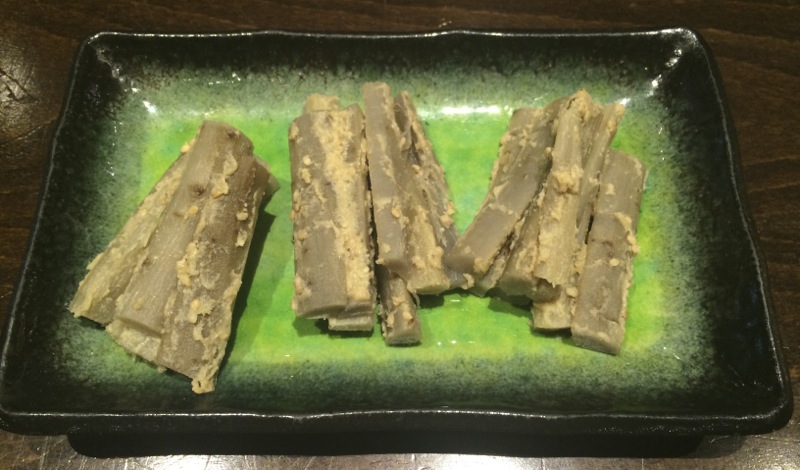 Unlike at most Japanese sushi counters where they are proud of serving their own style of roll, here you can select your fillings from vegetables, proteins and seafood. There are some interesting vegetarian rolls like the Inari roll made with fried bean curd skin marinated in sweet soy sauce, stuffed with sushi rice and watercress or the US style, salmon-based Alaskan roll, freshened with asparagus, carrot and cucumber with tahini dill on top, that might tempt you to let the choice on the chef. Nevertheless, most of the seafood are typically Japanese choices: steamed shrimp, eel, tuna, hamachi, mackerel, cod.
Fermented foods are proven to boost our immunity through the beneficial live bacteria that these foods contain. Miso is one of them but also pickled vegetables, mushrooms and roots like in Souen’s homemade side dish of pickles. Starting with a refreshing cold plate of Tataki Gobo marinated burdock in organic soybean miso paste we got our immunity running. The richness of the marinade and crunchy burdock root were in perfect harmony not just with nature but also taste-wise.
Another vegetarian small plate of Yuba steamed tofu “skin” marinated in kombu-shiitake broth is not for everyone. It is an acquired taste, and I remember accidentally buying it at a market in Kyoto, thinking it was a soy yoghurt. As I dipped my spoon into the milky broth and with raised eyebrows pulled the noodle-like streaks of yuba, I thought, fun, something new, and as I slowly chewed, my pace decreased and my mouth pulled itself from aside to side, up and down, unwilling to swallow the weird, chewy and gloopy stuff. Finally, I did, but could not force myself to give it another chance. It was only later, when I inquired with an English speaking Japanese native, that I learned that its drier version is easier to appreciate. At Souen they make this later version just perfect, plus the marinade helps. You can also have it in a vegetable soup, but we went for the more classical bowl of soy-bean-paste-based miso soup after adventuring with the cold yuba.
Mains are vegetable based. Very flexible and available at all three locations is the balanced Macro Plate of steamed greens, vegetables, brown rice, hijiki seaweed, beans and home made dressing. We tried the popular set plate of Broccoli Tofu, an ultra nourishing combo of broccoli sautéed with carrot, onion and crushed tofu in carrot sauce. A naughty option is Parmigiana Sandwich, a deep-fried cutlet with whole wheat-crust cooked in beet marinara sauce. It is still a healthier version of the Italian Veal Milanese. Fried foods are, health-wise, perhaps the only questionable fixtures at Souen. Tempura offered at the Union Square branch is tasty though. 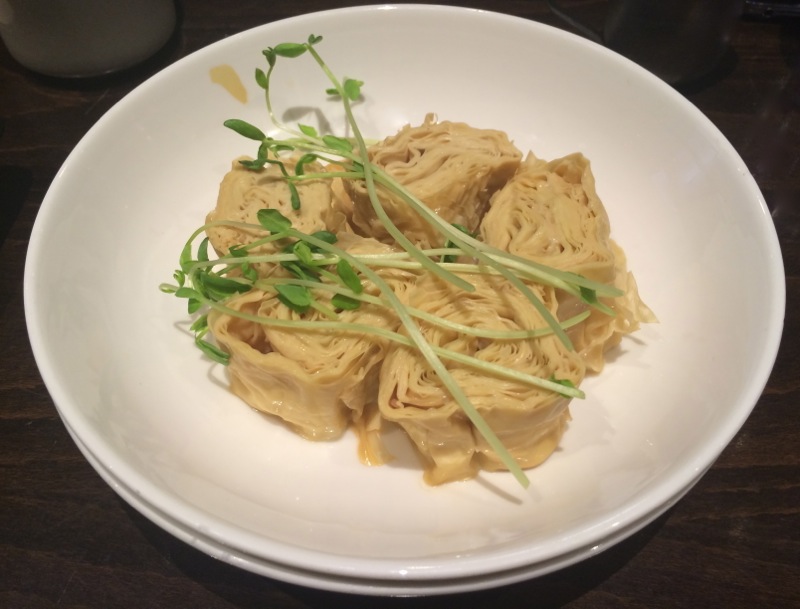 Souen’s food approach (also macrobiotics) is rooted in the yin and yang foods as was documented by Traditional Chinese Medicine. These are considered according to their cooling or heating properties also in most Eastern diets. Undercover even the Indian ayurveda draws from these principles. The holistic Traditional Chinese Medicine coined these terms, and the Japanese acquired them together with chopsticks, ceramics also some of the other for millennia-held health views.
The theory is centered around the nervous system, that is divided to parasympathetic nervous system (yang) and sympathetic nervous system (yin). Good health results from the balance between the two systems.
Four factors that determine whether a food is yin or yang:*
• How the food grows (including speed and direction)
• Where the food was grown (in northern or southern climates)
• The sodium-potassium content
• And the effect the food has on the body (hot or cold effects)
You should eat “cool” foods when it is hot, and “hot” foods when it is cold. Additionally to this, in ayurveda and traditional Thai folk medicine also the natural elements must be balanced (earth, fire, water, air-wind). For a Westerner it may sound complicated, but at Souen they are willing to advise and school you during the regular lifestyle courses on weekends. Check http://souen.net/latestnews.html for current happenings. 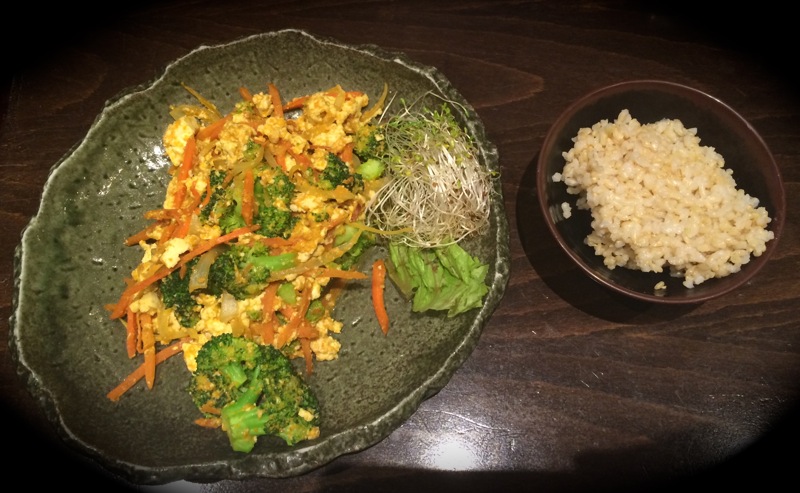 One of the most popular teas for macrobiotic lifestyle followers in Japan is Kuki-cha. The lightly brown infusion is based on the tea plant’s stems, the twig tree, that are lightly caffeinated while rich in calcium and vitamin C.
Wonderfully tasting is the Mu 16 Tea. Despite its strange name, this blend of 16 mountain grown herbs including licorice, ginseng, ginger, peony root, cinnamon and other lesser known plants grown in Japan, is a perfect balancing tonic created by George Ohsawa, the father of Macrobiotics. It strengthens mainly the stomach and reproductive organs.
No caffeine is found as well as in barley and rye ‘coffee‘, an ideal alternative to overtly acidic coffee that can be savored all day long.
Organic fruits and vegetable juices are being extracted by Norwalk juicer, with the promise of “not destroying all the nutrients and enzymes, containing three to five times more nutritional value than conventional juicers“.
Souen also offers take-away including its delicious pastries, cookies and other sweet treats. The Blueberry Scone was out of this world! Baked with spelt and brown rice flour, maple and rice syrup, almonds, sesame seeds and dried yet lush berries, it was moist inside while keeping the crumbly crust typical for great scones. 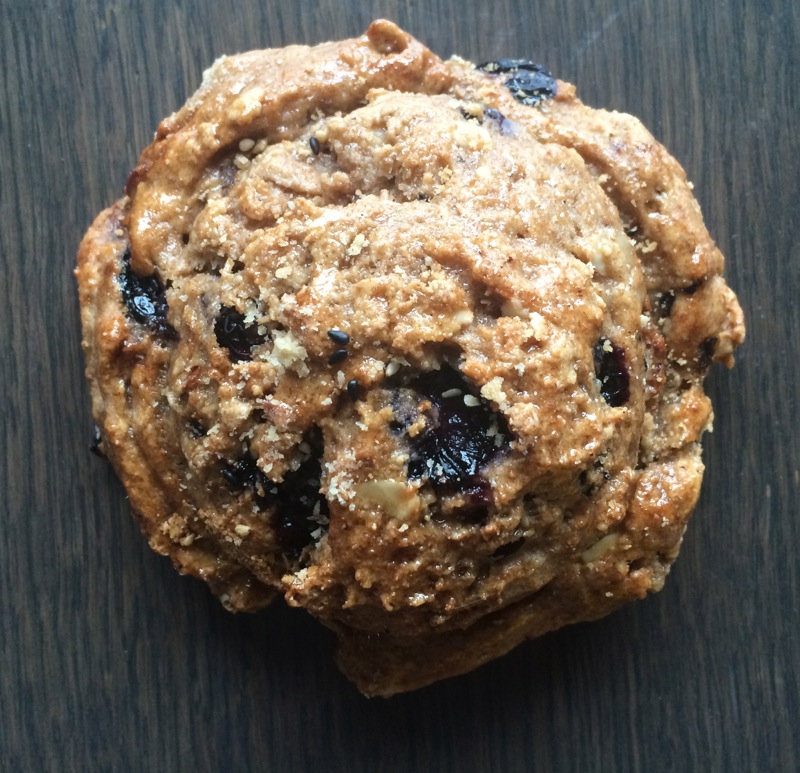 At the Union Square branch, upstairs the seating is less busy and better for a more relaxing evening meal, while the ground level is where all the buzz happens, although, arguably, the Latino chefs in the kitchen singing into the tunes of their bouncy music hidden from your sight only by a monkey-faced curtain underground steal the show for the most entertaining band. The newest East Village spot is nicest in terms of design and ideal for a healthy date out.
Although New York and other metropolitan cities have been swayed in the health, detox and organic taxonomy, Souen is not about trends and fashionable ingredients that leave the spotlight as soon as the season passes and chefs and food writers get bored of it. Macrobiotics is not just about what to eat, but it is an entire lifestyle that should be followed long-term if not for life, so its health benefits are maximized.
Addresses on Manhattan:
UNION SQUARE: 28 East 13th Street
Between University Pl & 5th Ave
Tel: +(1) 212-627-7150
Monday – Saturday: 11am – 10:30pm
Sunday: 11am – 10pm
EAST VILLAGE: 326 E 6th St, New York, NYC;
Between 1st & 2nd Avenue
Tel: +(1) 212-388-1155
Monday – Saturday: 12pm – 11pm
Sunday: 12pm – 10pm
SOHO: 210 6th Ave & Prince St. NYC
Tel: +(1) 212-807-7421
Monday – Friday: 11:30am – 10:30pm
Saturday: 11am – 10:30pm
Sunday: 11am – 10pm
*Information obtained from Souen.