The cookery school at Lucknam Park, blends together a serious cooking boot camp with individual attention adjusted to each participant’s needs. Having fun, while churning out well-crafted dishes also slips into the school’s curriculum. Although the classes are open to all levels, some are just not suitable for beginners. Mostly, you need to familiar with cooking, cutting, and some basic techniques and equipment in the kitchen, so you do not end up staring at your neighbor’s drawer trying to figure our what the instructor meant by pulling out a mandoline or chinoise or chef’s knife. On the flip side, the chef and his assistants are always on hand to help. It all starts already when you enter the changing rooms before the class starts, you will be given an apron and a real white chef’s jacket signaling that today you will be participating in some serious cooking and not just watching, sampling and sipping a chardonnay. 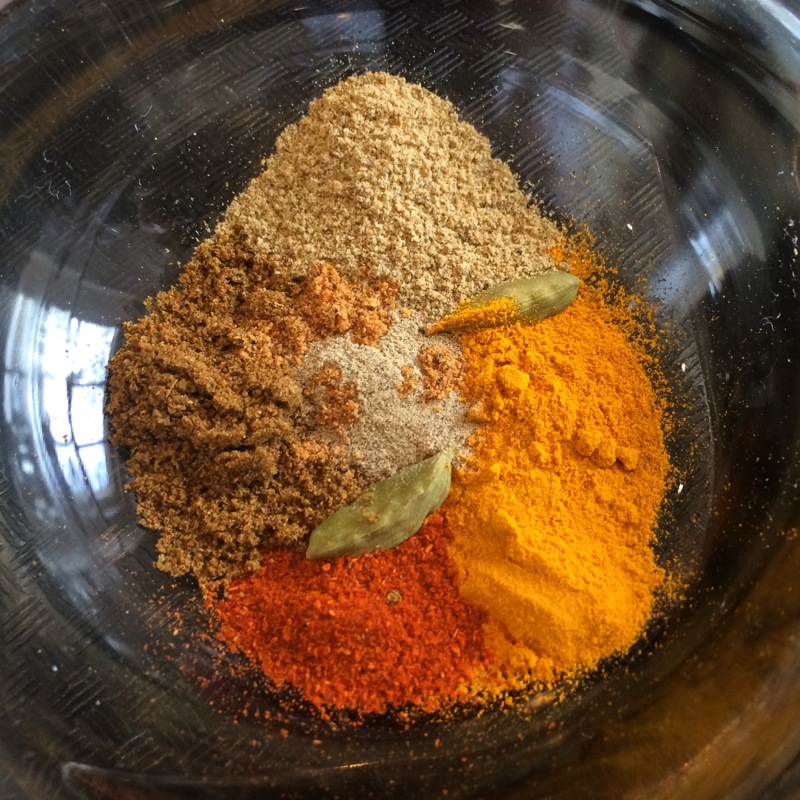 The leader of the school is an Indian chef Hrishikesh Desai, who also instructed the class “The Spice Route of India”. The best candidate for teaching us how to make an Indian bread, chutneys, curries, and all the other essentials of his home country’s cuisine. His sense of humour was constantly pulling our lips up as was his genuine personality eager to share tips, experiences and recommendations for places to eat and buy Indian food and ingredients in the surrounding towns as well as in London.
The chef familiarized us with the nature evoking colorful palate of Indian spices used commonly in preparation of the most iconic dishes. He also explained the tricks for essential dishes like Chicken tikka, Lamb ke Sule and the hand-rolled flat naan bread. Discussions preceded and followed each of the cooking segments, so we were blessed with opportunities to bring questions about anything related to Indian food as well as various cooking techniques. 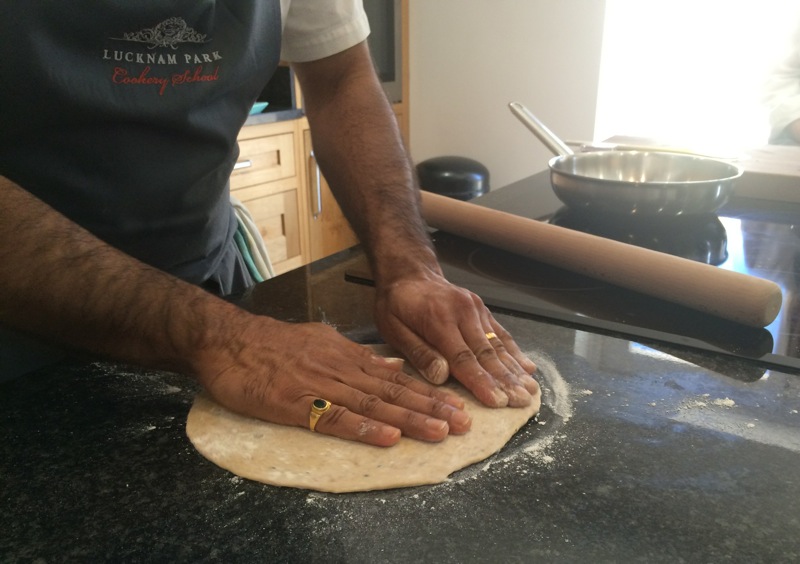 The ultra modern equipped school is housed in a lovely old English countryside Relais Chateaux retreat, a horse ride from the charming spa town of Bath. Cooking on electric induction stoves was a god-sent training for my own home, since I had been struggling with these easy to clean but distinctly behaving cooking surface since I moved to a new flat last year. The induction heating is also inviting for improvisation, particularly when Indian cooking techniques such as tandoori or charcoal cooking are involved. The electric, high-tech flat, and heat generating boards can now find a more sophisticated use in my home kitchen.
From the six recipes we prepared, two had to be adjusted to this whim of modernity. The naan bread is traditionally made in a charcoal-fired tandoori oven. Tandoor is a wok-shaped deep metal or clay used in some parts of Asia. It is relative to our traditional wood or charcoal burning stove. We used a deep iron flat pan coated with the neutrally tasting sunflower oil, that we used for most of the pan frying in our Indian class. On a medium heat (7 on induction) I could tap my flat bread with my fingers moving and flipping it around to check if the bronze tan had covered most of its bottom side. Using a mixture of plain and whole wheat flour we made the healthier version of the naan. It was a perfect companion to most of our sauce-based dishes. Except one of them, the Lamb ke Sule, that was served with deep-fried, flour crusted Onion Bhaji. 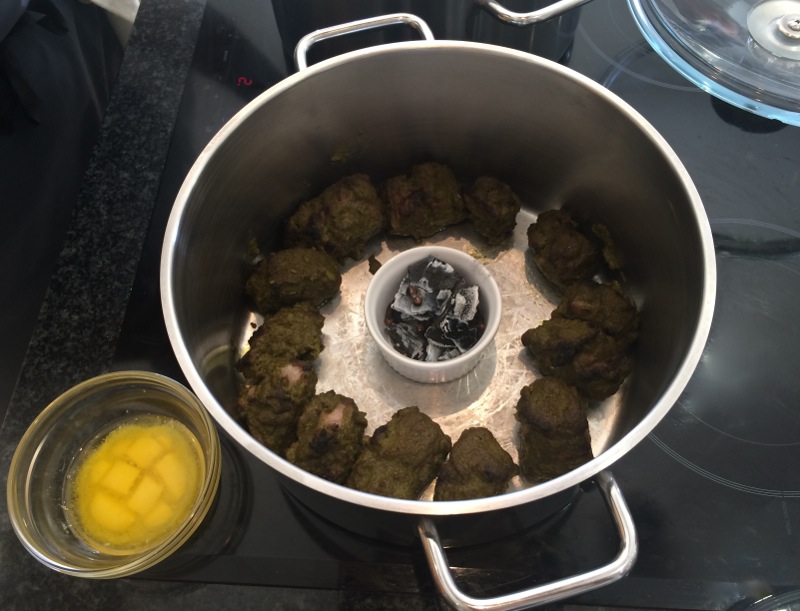 In the Lamb’s preparation the chef revealed another trick for a Western kitchen. Getting hot live charcoal pieces from your fireplace or burning it slowly on the fireproof floor of your terrace, putting it in a small ceramic dish in the middle of a wide and deep pot, placing around it all your meat and covering it, will result in a tandoor-like cooking dish (pictured above). It wasn’t my favorite plate, since I am not a chewy and fatty lamb meat lover. My preference for tender, flashy meat would require a leaner cut, not a stiff neck as in the Lamb ke Sule. A careful, long cooking on a low temperature also keeps the softness of the animal intact.
We also learned how to make the most frequent Indian chutneys – the Tamarind and Mint chutneys, as well as how to roast a perfect and fresh Garam Masala blend used in spicing up many dishes. The chef advised to do this every single time we prepare a meal with Garam Masala, since the aromatic beauty of the spices reveals itself as the most fragrant blossom when freshly roasted. Some rice was needed to accompany all the spicy and rich saucy dishes, so the chef demonstrated how to prepare the perfect pot of Cumin Rice. Not as easy as it sounds, so worth taking his class, since this is one of the omnipresent staples featured on an Indian table. 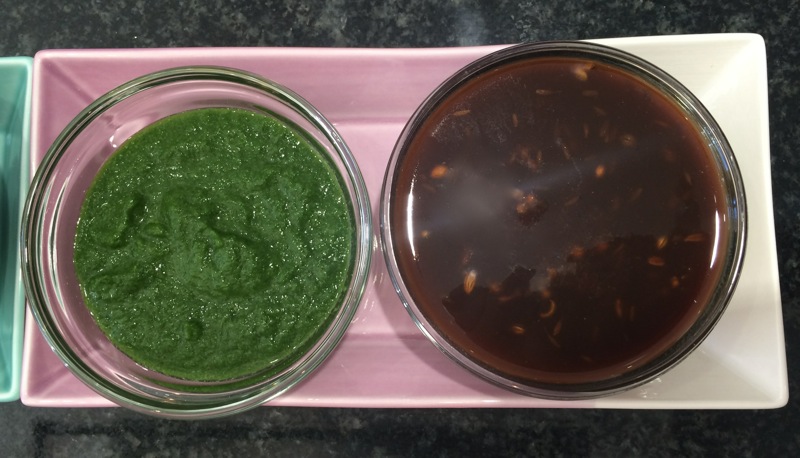 The spices and where to get them

The chef shared his practical tips on how to choose and store spices so they keep fresh. His first question had already stirred our curiosity. “How old are your spices?“, he asked as we raised our eyebrows at first, but his advice later surely flipped over many in-house pantries after the class. A maximum of six months!! and for some, like cardamom seeds, only up to three months of storage for best freshness should be adhered to. “Wow!“, I whispered to a friend of mine, who was also my cooking partner. I bought my spices two years ago when visiting India and since then I used them once since I was waiting for the right mood and dish to pair them with. Well, now I have the right dishes, but I also need to get fresh spices. Luckily, England is well stocked with Indian ingredients, unlike most of France and Monaco, where I currently live. The Spice Shop on Blenheim Crescent in West London was included in the cooking folder that was to serve as a resource for our future adventures with Indian food. In New York, there is Dual specialist grocer in the East Village selling spices, herbs, raw nuts, grains, oils and many other edible ayurvedic potions. Once it was referred to me during other of my culinary learning experiences – the Ayurvedic cooking in Manhattan – I rushed in, excited, and was ushered into a foodie’s paradise. Crammed, but you rarely see such a diverse repertoire of spices outside India and the Middle East. 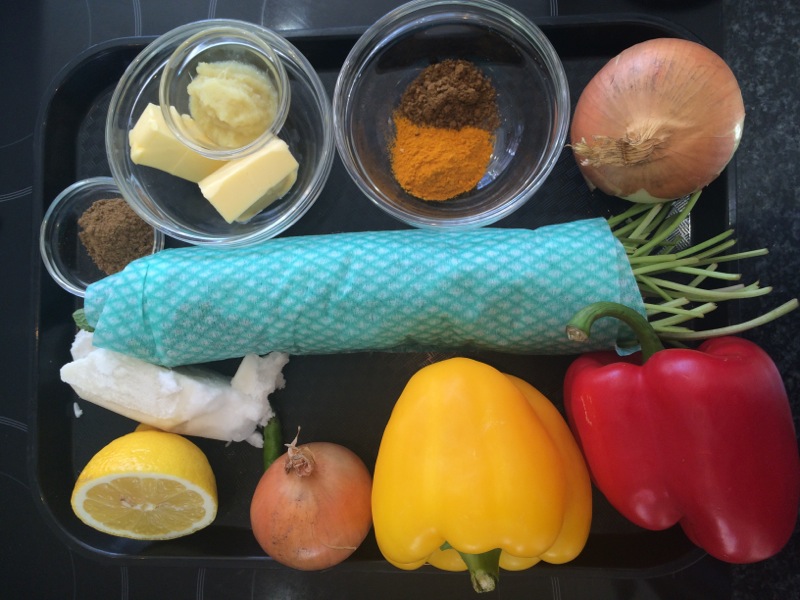 We prepared:
Onion Bhaji: a deep-fried sliced onion snack or a side dish, that can be served with lamb
Lamb ke Sule: marinated lamb neck filets looking like a kebab but cooked with charcoal
Paneer air Mirchi green masala: paneer is an Indian chewy sheep cheese similar to haloumi, but far less salty, it was cooked in a coconut milk based sauce, spiced with green chilies and herbs. My as well as many of the other participants’ favorite main dish.

Kukkur Kabab kadhai masala: grilled marinated chicken kebabs, later pulled off the skewers and served in a rich tomato and fenugreek gravy
Dal Tadka: thick lentil side dish (=dal) tempered with spices (=tadka) was also my favorite, and I could dip my naan endlessly into it. Also great with rice.
Flat bread: plain wheat bread also known as naan in India, cooked on a hot pan like a crêpe, but moulded with your fingertips. 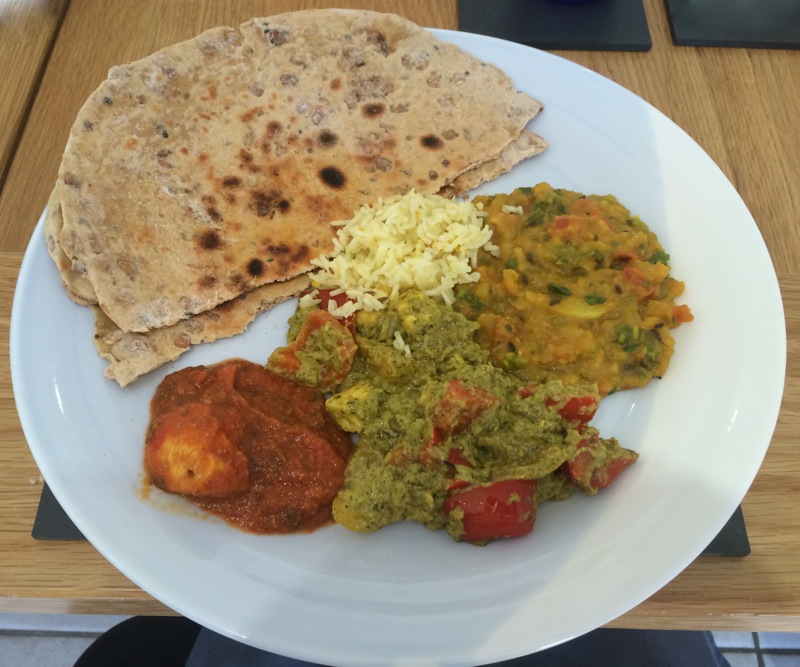 Interestingly, with a hindsight there were these ingredients common in all dishes we prepared during the half day long class – onion, salt, garlic, chili and ginger. Turmeric, cumin and coriander were also the most used spices and herbs respectively, therefore investing in buying these for your home can set you for most Indian challenges in your kitchen.
With a maximum of 10 guests, each “chef” gets plenty of attention and touches almost every dish during the preparation. A multi-course lunch is the ultimate reward for the long day’s effort. You might be starving, like us, after so many hours on your feet, smelling the fragrant pots and stirring the taste buds teasing sauces. Bringing take-away dishes for the left-overs is advised, but if you are also staying at the lovely five star hotel next door, then you will have to stick to sampling during and stuffing yourself right after the class since at least our room did not have a fridge to store any of the food we prepared. A shame, yet the hotel’s Michelin stared gastronomic restaurant is excellent and worth trying at least once during your stay. 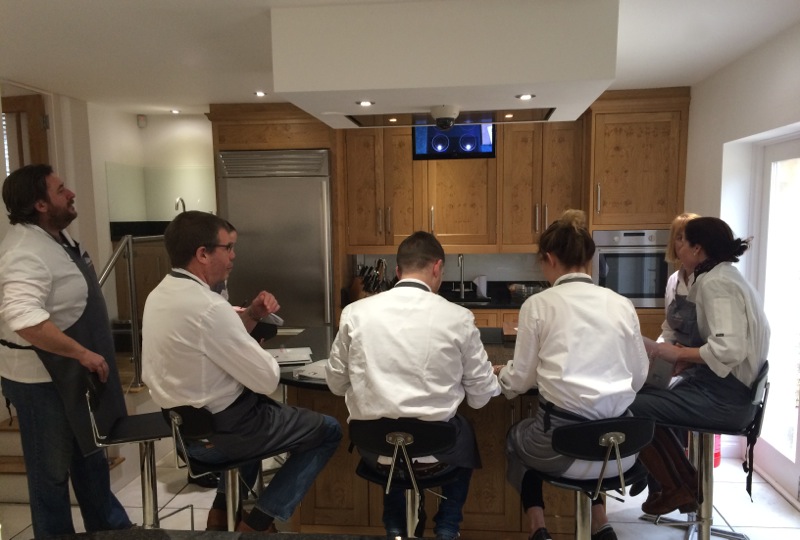 Lucknam Park organizes plenty of different cooking and baking classes throughout the year. From bread baking to Malaysian flavors tutored by a Master Chef champion. Check their website and book the next cooking adventure that is ideal for you. Classes for parents with children are also available.
Full day course £175 per person; Half day course £75 per person.
+ 44 1225 74 27 77; reservations@lucknampark.co.uk