Massimo Bottura, the currently most globally revered contemporary Italian chef, invented a funny title, you may think, except he did not invent it as he borrowed the catchy slogan via an almost pop-artsy inspiration – a poster at a friends’ apartment. Using his play of words so characteristic for naming most of his dishes such as Bollito, not boiled or abstract expression as in the Camouflage: Hare in the Woods has become a distinct trait of the menus. Never Trust a Skinny Italian Chef is not a cookbook in a traditional sense: filled with measurements, ingredients and practical as well as technical aspects of each recipe featured. The recipes are supplied at the back of the book in a small print. Perhaps the chef anticipated, correctly, that not many home cooks have a rotary evaporator and other gadgets of molecular gastronomy on their disposal, but instead he rewards the readers with an entertaining read of a journey to an adulthood, the maturation and transformation as time goes by, for each recipe. A critical viewpoint rather then a nostalgia for the mamma’s cuisine and childhood treats, shows in the Osso Bucco, were the yin and yang sauces and a white point of dried Japanese rice makes up for the often overcooked rice of the chef’s mother’s cooking.

For him “Creating a recipe is like solving a riddle. While you are in the thick of it, you keep hitting dead ends. Once you find the solution it seems obvious.” 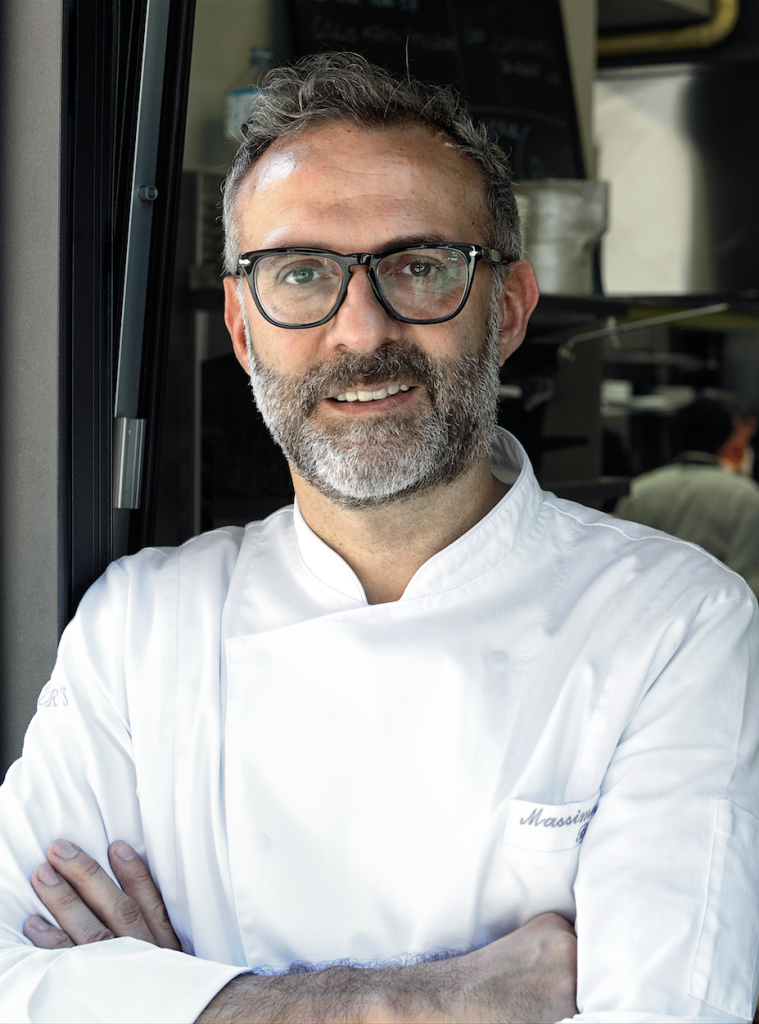 The book Never Trust a Skinny Italian Chef sets its tone with Bottura’s dialogue with the Italian artist Maurizio Cattelan, whose (some may title eccentric) installation the ‘Tourists’, assembling stuffed pigeons hanging out on a rack, welcomes diners as they enter his three Michelin stared restaurant.

The chef owes to the art world not just pure survival of his restaurant Osteria Francescana, as artists had been frequenting it under the previous owner, before he opened the restaurant under the same name again in 1995, but the art was also the culprit of his creative awakening. The menu has been illustrated by Giuliano della Casa for about two decades, and so continues the creative journey in the same spirit.

The author acknowledges the arts’ influence over his work as he writes: “the kitchen is a place for remembering, but also for erasing. Know everything, forget everything.”

Also, playing with tradition and discovering the working-class roots of the Italian kitchen is elaborated in one chapter, where the chef attempts to “see tradition from a distance”.

Each dish (48recipes in total) is portrayed as a dialogue between the chef and his team or his other muses (see lower), while the honourable producers and farmers of the iconic Emilia ingredients are often also included into the conversation. His recipes went through a long evolution, in some cases they took decades to master. Divided into four chapters, each conceptually, philosophically and technically dissecting the featuring 12 dishes:

‘Tradition in Evolution’ is about the terroir around Modena and his reconceptualising of it on his plates;

in ‘Working-Class Heroes’ he elevates the staple dishes of an Italian household into his first Michelin star;

the ‘Image and Likeness’ brings contemporary art on the plates through the medium of his American wife Lara and later the artists themselves;

and the final ‘Come to Italy With Me’ pours the chef’s emotions on the menu themed around a trip from the South to the North of Italy.

Italy’s history as well as its emotional relationship to its cuisine are the main subjects of the introductory chapter ‘From Ten Kilometres Away’. The well-read chef shares his observations of the post-war Italy: “fast cars and slow food were our interconnected identities”.

Later he explains why he had set to challenge the Italian culinary traditions: “a recipe is a living thing”, so he takes tortellini and makes them to walk on a broth, transforms the iconic Tagliatelle al ragù and the Five Ages of Parmigiano Reggiano transforms this regional hard cheese pride into a delicious presentation of its capabilities as a ‘living’ ingredient.

The muses of Bottura and the book Never Trust a Skinny Italian Chef are popping out from anywhere – the Italian history, culinary traditions, music (the lyrics in songs by Johnny Cash, Bob Dylan, John Lennon, and many others stirred ideas), his daughter, other Italian chefs, landscape (Manhattan), memories, and anything that captures his hyperactive attention. There seems to be flowing an endless stream of inspiration in his mind. The chef’s album became also the book of recorded inspirations for the dishes as well as a foundation of this publication.
He is extremely driven saying that, “There is no going back, there is only moving forward.” Skimming through the recipes you will realise that Emilia penetrates most of the dishes. There is pork, disguised or right there torn in pieces, in almost everything. This is not a cookbook for vegetarians or vegans, but for genuine Modenese ingredients lovers who dare to experiment when guided by the chef. 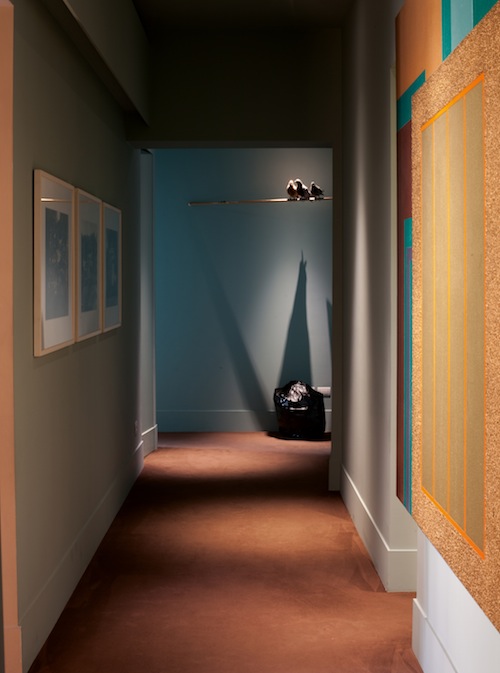 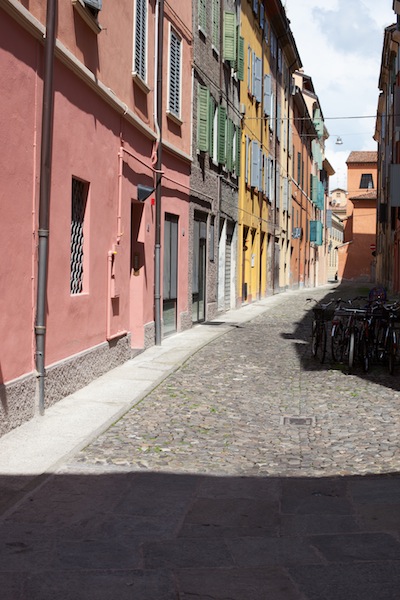 This substantial book is an excellent, entertaining, knowledge packed personal account of Italy’s food and its background. The chef’s stories interact with historical records of how the country’s edible or ‘sipable’ icons came into existence. Cappuccino, mortadella, parmesan, parma ham, …

Bottura’s Never Trust a Skinny Italian Chef uncovers the magic tricks in the illusions of some of his iconic dishes. In his ‘Cappuccino’ the chef discloses that “what you see is sweet, but what you taste is savory. What you see is Italy, but what you taste is Emilia.” So, what you spoon out of the white cup is a creamy onion and potato soup served with a pork crackling pastry. Deceptive, yet delicious.

His precious sources, the farmers and producers are credited for their savvy, but also he honours his staff by acknowledging their common creative effort before each new dish matures to its glamorous existence.

Illustrated with clean, contemporary photographs, many of them highly personal, the raw state of the featured ingredients before the ‘cheffed’ version appears plated like a work of art is captured by the lens. The temporary existence rather than contemporary art piece of his food truly deserves its coveted awards and this book will make you to appreciate his legacy to the Italian cuisine.

After reading Never Trust a Skinny Italian Chef, you may understand more clearly, why I call him a genius in my chef’s profile. Given the luxury of time to reflect, the work moulds its shape into a completely new sculpture with a coherent story (as in the Veal Tongue served with worldly sauces on p.132). Like with any artist, the direct encounter with the maestro paints question marks in your head. In the chef Bottura’s peculiar case his child-like energy that he shoots all over the place like a Ferrari racing through the room in an endless circuit, is striking. Otherwise, he seems to be a well-grounded person with unusual ideas constantly spinning in his head. On the outside though, he is conducting gracefully his talented team of chefs at the Osteria Francescana. Oh yes, their imagination has no borders: “We wanted make the invisible visible”; so a bean was compressed together with ‘pasta’ of parmesan and served in a shot glass, a humble Italian sardine is dressed as a fancy nordic herring.
After all, most of the interesting and revolutionary artists were eccentrics to some degree.