Tenuta dell’Ornellaia makes one of the iconic Super Tuscan wines made from the French – typically Bordeaux grape varietals – in the Italian region of Maremma. This corner of Tuscany stretches alongside the sandy Tyrrhenian sea coast, celebrated for its natural beauty as well as stable climate.
Eschewing the for Tuscany traditional Sangiovese, a blend of Cabernet Sauvignon, Cab. Franc, Merlot and Petit Verdot is incorporated into the flagship Ornellaia DOC Bolgheri, and a pure Merlot for its distinctively high-end Masseto. The later can only be labeled as an IGT, since it is made just from a single grape varietal, and is planned to be totally separated from the Tenuta dell’Ornellaia in the near future. Sangiovese is planted on the estate though, but it is used in a blend of the more affordable Le Volte label.
The first vintage of Ornellaia was released by the Marchese Ludovico Antinori in 1985. A nephew of the Marchese Incissa della Rocchetta, and a brother to Pierro Antinori who oversaw marketing of Sassiccaia and now shields another icon of his extensive wine stable – the Guado Al Tasso (since 1990) in the same area, Ludovico built on the success of his related family with the Sasiccaia. The ownership is under the Marchesi De’Frescobaldi holding. 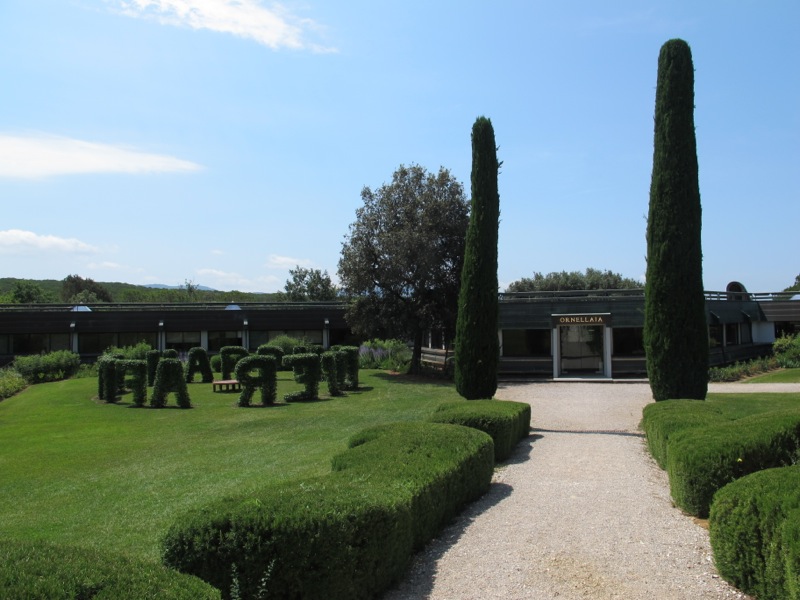 The estate of olives, vines and art

The entrance to Ornellaia intersects the two hemming lines of camouflaged soldiers posing as an army of green cypress trees of the road that splits the estate to two parts – the closer one to the sea known as Bellaria is more stony. Standing straight up, alongside the Aurelia, an ancient Roman coastal road, the grand Viale Dei Cipressi, announces the serious operations inside the properties that branched out its trunk.
Despite the original nineteenth century farm house being closer to the road, the winemaking itself today takes place further up the hills closer to the soil-diverse vineyards in a super-modern low-built edifice. By no way small, the estate has 99 hectares under vines, separated by the road as well as tall cork trees and about two thousand over 100 years-old olive groves. The later produces a delicate and smooth ‘Olio Extra Vergine di Oliva Italiano’ blended from local varietals. Unlike most of the characteristically spicy and bold Tuscan olive oils, it is rather smooth and soft in the mouth. 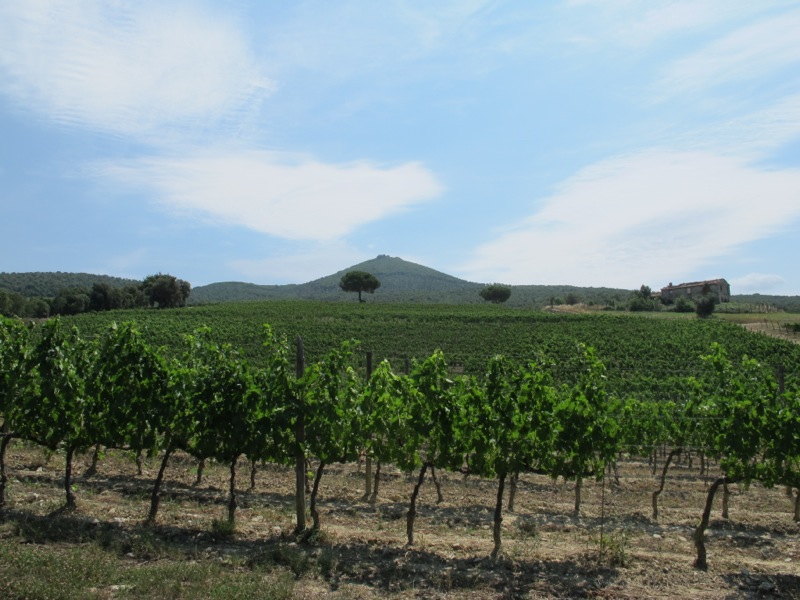 The Bogheri microclimate with its maritime mild winters and by the sea cooled summers, protected from wind by the hilly range in the background, has been recognized after more than fifty years of Cabernet cultivation by Tenuta San Guido, the parent of the much admired Sassicaia, as one of the most suitable areas in the world for the Bordeaux varietals.
Ornellaia is quite young for an Italian winery, yet in a short time it managed to establish itself as one of the leaders in its country. Merlot is for Masseto what Cabernet is for Sassiccaia, but Cabernet is the backbone of the blend in Ornellaia despite varying in concentration from a vintage to vintage. The estate’s premium priced Massetto is a pure selection from a single clay and stonier vineyard in the Western corner of the property, that became so distinct and successful, that it is planned to be separated from the Ornellaia brand.
For seven consecutive years Ornellaia has been releasing limited edition art bottles on its magnums, imperials and the unique super-sized nine-litre Salmanazar. Each year, an international contemporary artist has been invited to the estate to create his/her interpretation of the content inside the bottle. Michelangelo Pistoletto ‘artified’ the 2012, Rodney Graham in 2011, Zhang Huan 2009, Rebecca Horn 2008, Ghada Amer 2007 and the first artist vintage, according to the wine production team the “exuberant” 2006, was envisioned by the Italian sculptor Luigi Ontani. He erected four gold-painted columns serving also as fountains, capturing the annual natural seasons (picture bellow). 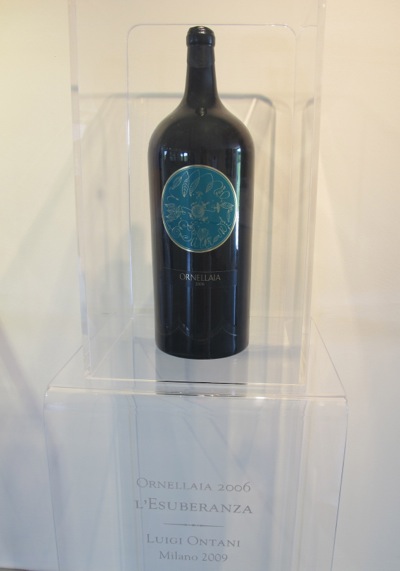 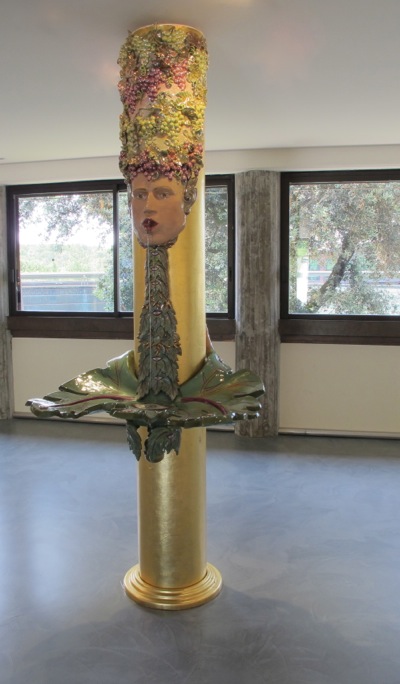 Each year since then, an art piece such as sculpture, an installation or a painting, was placed in the winery and featured in the series of 111 large format bottles. Signed by the artist, a selection from these has been sold mostly through art-supporting charity auctions.
With the current release of the 2012 vintage, the ‘Ornellaia Vendimia d’Artista’ became more accessible. Now, anyone who purchases a six-bottle case of Ornellaia, will receive one limited edition art bottle in the wooden box. “L’Incanto” 2012 vintage is full bodied, rich, fruity, spicy and expressive and that is why the winery chose the word “enchantment” to describe it. A Swiss artist John Armleder enrobed the spirit of this wine on the top part of the bottle titled ‘Splash’.  The showy clear glass sculptures, each one unique due to the artisanal techniques used to create them, have been created with a different finish for each format. Iridescent top coat for the 100 double magnums, chrome for the 10 imperials and gold leaf for the rare Salmanazar. It cannot get more opulent than that. 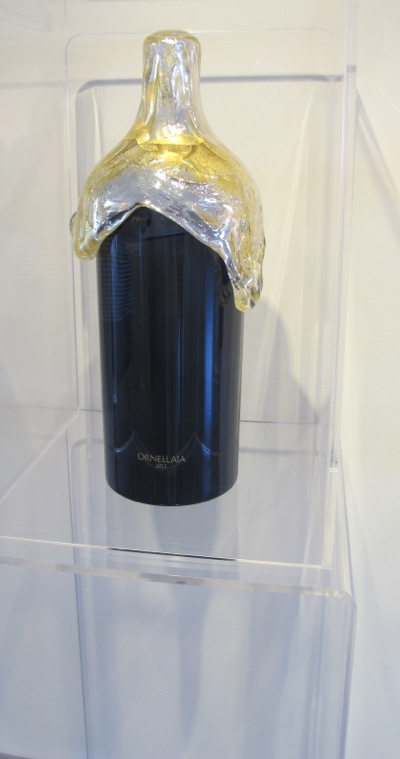 Not as elegant and smooth as the same vintage of Sassiccaia I tasted just a couple of hours after our visit, the 2012 was bold, powerful and eloquent and the tannins harsher. This youngster has many years ahead though and might surpass my expectations as the tannins soften and the desired harmony unveils its charming equilibrium.
The winemaker of Ornellaia Axel Heinz, directs the modern technology utilizing winemaking. The world’s most powerful press to date, the German-made JB press that I’ve rarely seen at wineries except for the hyper-exclusive project such as the Napa Vally Reserve in California, is used, as well as the best quality of French barriques and temperature precisely controlled stainless steel vats. Hand harvesting and careful sorting by women are the most direct human touches that the grapes obtain, but then it is all in the powers of the winemaker, his sampling of the vats as they mature before he decides which will be blended for each label. 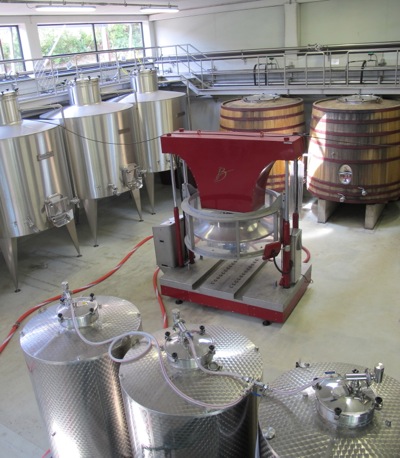 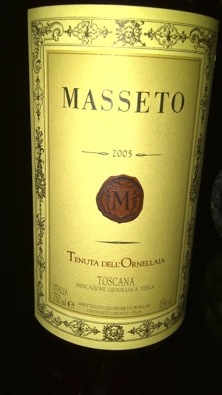 Ornellaia is selected each year from the 60‐65 “base wines” developed during the first in wood vats.  When blended the winemakers has to respect two primary criteria: to express the distinct style of Ornellaia, while upholding the context of the style of the vintage. Then aged inFrench oak barriques for 18 months, 12 months of bottle aging follows. The 1998 vintage was declared Wine Spectator’s Wine of the year as did the 2006. Each single vintage between the 2006-2011, the wine constantly mesmerized the raters giving it overwhelmingly top scores.
Another top scorer, but a very different wine by the Tenuta is Masseto. I’ve had the pleasure to try this pure rare Merlot once, but the international craze after this wine caused the prices to climb so high that I will unlikely be able to repeat it any time soon. The 2005 vintage I shared with my husband was balanced, youthful yet complex and promising. It was not the best wine I have had to date, but enjoyable and stirring curiosity of how it would age.
Le Serre Nuove is the Italian adaptation of the Bordeaux ‘second wine’. Made mainly from younger vines or the vats that do not make it into the flagship Ornellaia blend. With the grapes from the younger vines in the blend it is more approachable in its youth and also more affordable.
Le Volte is the Tuscan brother of the other wines as its blend includes the local lively Sangiovese varietal next to the Merlot and Cabernet Sauvignon.
The winery also produces a less successful white wine Poggio alle Gazze mostly from Sauvignon Blanc. I tried this wine at the wonderful Enoteca Tognoni in Bolgheri, and was not impressed by its ripe but incoherent firmness. Although a very limited production (2 ha of Sauvignon planted), it is not yet a good value for money as the bottle costed about €50. Perhaps the future vintages will be more refined and worth your hardly earned sallary.
Ornus dell’ Ornellaia is another extremely limited production. This late harvest sweet wine from the 1 hectare of Petit Manseng captivates an entire palate with its sappy richness. The name as Ornus is the Latin name for the Manna tree, truly nourishing.
The winery does not stop here, as the Tucan wine spirit known as grappa is also bottled. The Eligo dell’Ornellaia Grapa Riserva is distilled from the pomace of the red varietals grown on the sprawling estate.
To book your paid visit at Ornellaia call or send an e-mail:
Ornellaia e Masseto società agricola s.r.l.
+39 0565 718242
info@ornellaia.it
The tour and tasting take about two hours and include the tasting of the current vintage of each of the estate’s wines (excluding Masseto), the olive oil and their grappa.