"This is the real Slow Food. Anyone passing by suffers from an involuntary itching that draws the eyes towards the perfectly round striped melons, the zebra squashes of all colours and shapes, and if you swirl the wheel off the road, the berries will get a closer look as well. This morning's eggs, just out-of-the-water picked oysters, antibiotic-free milk, fresh or aged cheese, ... a heaven for scantly processed food."

North Fork’s natural bounty is harnessed by its small scale farms. On a map, the by salt water flushed masses of land look like a fork for some, thus the name, but to me the two Eastern tips (Forks) of the Long Island resemble a crab claw. The hard shelled strips of land, North Fork and the extended Hamptons in the South (Fork), clamp two fertile bays. The geographic claw also voraciously clings traversable masses of the Shelter Island and North Haven inside its feeding sphere. While the Hamptons have been built up with summer houses for the New York’s affluent holidaymakers, North Fork aware of its innate flexing power has remained down to its job. Despite being smaller, the farming area is the cracking muscle of the claw. 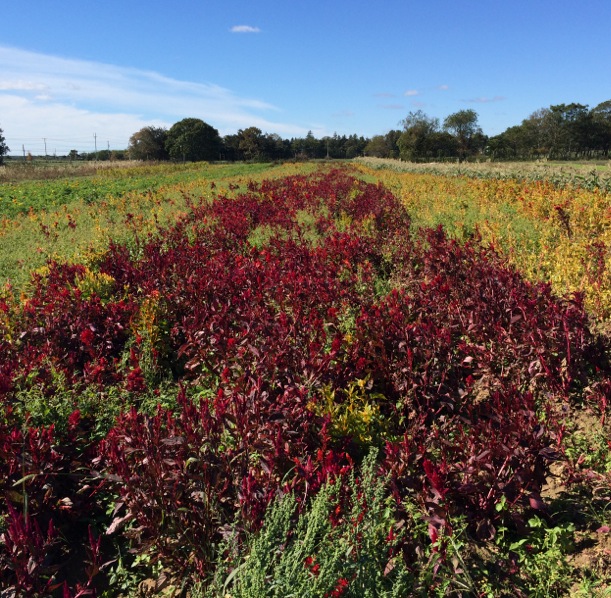 Densely farmed as it was for centuries, abundant with oysters, organic vegetable patches, blooming orchards, and attentively groomed animals, the area was once the breadbasket of Manhattan and it is coming back to the food scene. With more restaurants becoming sustainable, and the savvy diners demanding transparency in their ingredient sourcing, using Long Island’s, for New York local produce, is now in vogue. Top chefs demand the best quality with low carbon footprint. The steadily increasing popularity of farmers markets in and out of large Western cities naturally followed the trend setters, the celebrity chefs eagerly displaying their gastronomical political allegiance in the media.

Fresher than on your farmers market

Touring farms on the narrow North Fork can take an entire day. Since there are not that many roads to squeeze in, this is also the area’s charm. The traffic is notoriously slow. Not just during the summer and early fall weekends when its luscious produce and free-ranging landscape draw deserters from New York, but the snail tour de North Fork is orchestrated by a genuine human activity. 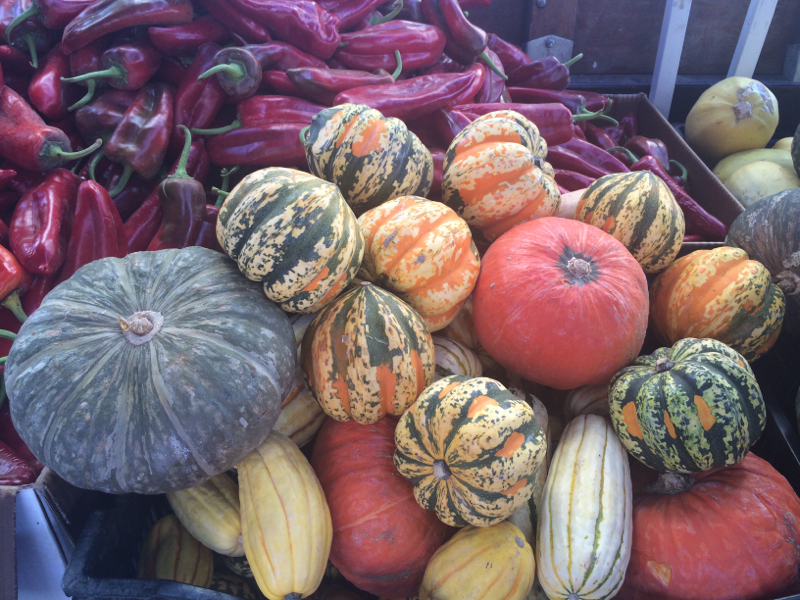 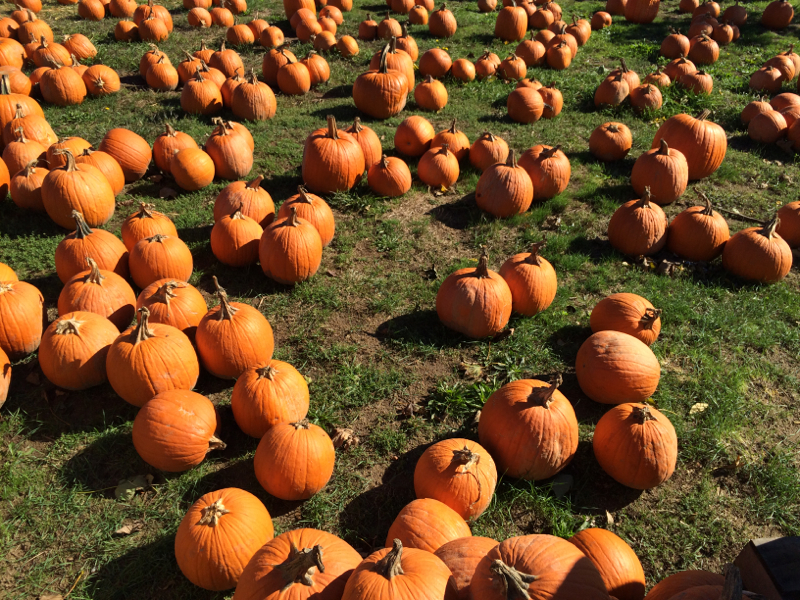 The luring farm stands embroidering the Main Road pull the breaks of cars. Do not honk, just take it easy if just for a day. This is the real Slow Food. Anyone passing by suffers from an involuntary itching that draws the eyes towards the perfectly round striped melons, the zebra squashes of all colours and shapes, and if you swirl the wheel off the road, the berries will get a closer look as well. This morning’s eggs, just out-of-the-water picked oysters, antibiotic-free milk, fresh or aged cheese, … this is a heaven for scantly processed food.
Stirring a little chaos on the country road is common. Passing a post sign that reads: “The best fresh goat cheese in America”, cannot keep you disinterested. Wait, did you see that? Let’s turn back. Break, squeeze the wheel, peak in the mirror for a glimpse of the widely open eyes and mouth of a shocked driver behind you. Not, this is not what the locals do, but there are now plenty of unaware visitors. Keeping a bigger than usual distance between the cars is highly advisable. There so much to distract you from the road though, even a lavender farm producing honey!
Loading one’s trunk with exquisite produce is just a material purpose of the two-and-half-hour journey from Manhattan. Having a great time, while wine tasting, milking goats, gulping ultra-fresh oysters, or dining at the casual taverns in Greenport, the commercial hub that has not yet been totally spoiled, make the trip an unforgettable experience. The Starbucks closed down as the residents preferred to support the local, never mind slightly bitter expresso by a Sicily-born local coffee shop veteran. Welcome to the muscular North Fork.

The experience of local farms was also the draw for our group. Serious foodies, budding chefs and their partners or spouses bussed at 8am on a Saturday in the weekend stillness on Manhattan. Sounds like a school trip, and it certainly was, the minor difference was that our age group was hard to define. Anyone from a teenager to a retired couple could join the farm tour organized by the Natural Gourmet Institute (NGI) in New York. Our troop leader was a NGI professional chef Rich Lamarita, who once a year, usually in early October, takes anyone signing in for a little over $100 (superb lunch catered by local salad and sandwich shop included) around his favourite spots.

Over 15 years ago this organic farm was founded by two environmental scientists, husband & wife. Eve and Chris are sustained mainly by CSA (Community Supported Agriculture) and cooking schools like NGI on Manhattan, who regularly purchase their environmentally clean produce.
Potato farms used to cover the fields, but the past decades introduced more diverse crops. At the Garden of Eve they grow around 70 varieties of vegetables and berries. We arrived into the October bonanza of pumpkins, a fall colour spectrum of perfectly round or genuinely bumpy squashes, but heirloom tomatoes, eggplants, beets, cauliflowers, were still ripening on the couple’s 65 acres of organic soil.
Not everyone subscribes to pesticide and herbicide-free agriculture in the area though since it is more costly and labor intensive. We witnessed the wild weeds relishing in the organic soil. Eve pointed out that it is costly to hire people to weed it out, but the crops usually bloom in this chaotic diversity. She further advised: “If the produce is not certified, don’t believe it is organic.” There are many charlatans selling produce at farmers markets and since now people seem to care more about where their food comes from and are willing to pay for it, some capricious vendors take advantage of the naive believers.
The farm hives with diversity. There are animals like dogs, sheep (for wool), turkeys, and about 1000 chickens, whose manure is used as a fertiliser. The chickens are not organic certified, for it you need to buy organic chicken, feed them increasingly expensive organic feed or raise them from chicks. The dogs protect the feathery egg-bearers from other animals like groundhogs and racoons. All these animals create the perfect win-win situation for the entire farm. 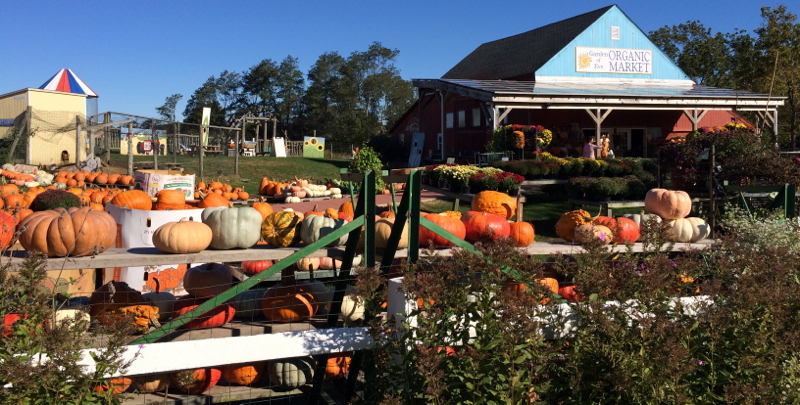 On five acres the owners Karen, a nurse, and her musician husband Michael, tend for about hundred milking goats. In the New York state all milk and cheese must be pasteurised, but goats milk doesn’t need homogenisation because it’s consistent and easy to digest (five times! easier than cows milk).
It is a costly and time consuming labor of love to raise goats for milk. While a cow produces 10 gallons of milk per day all year around, a goat only seasonally (May till November) gives about 1 gallon per day (about 1pound of cheese) despite being milked twice on a given day (we were allowed to try it as well). Adding to that a baby goat costs about 600-700USD; and requires lots of attention before after about seven months they generally start to produce milk.
Goats are picky about their food compared with free grazing sheep – hay and grass are their preferred delicacies, but for more strength grapes, carrots and manmade crackers are fed them after giving birth. The sweetness in milk comes from the food so at Catapano they feeding her sugar. It paid off since their Farmstead Goat cheese was chosen as the “Best fresh goat cheese in America” by the American Cheese Society.
In the US goats meat is not very popular so after they get old they sell it to other farms as a partner to horses etc.
Here, next to a delectable range of goat and sheep cheese, soft and aged as well as a goat milk soap, you can also buy the “Black Gold Compost”, a fresh chicken, goat and horse poo all in a bag for $8. Your plants will love it! 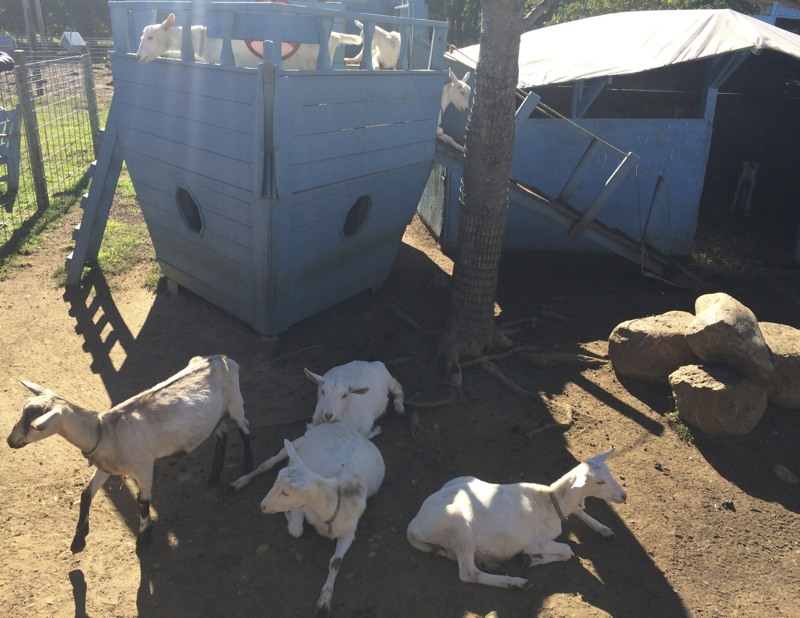 This biodynamic winery is quite large and commercial as most in the area, and often buys grapes from others. Their in stainless steel fermented white Chardonnay, Sauvignon Blanc and Riesling are good, although not bargains for the price of $27 per bottle. Macari also make young white wine in Austrian heurigen style, a rose that was so popular that it sold out this year, red Merlot and blend Sette that are nothing special, being overtly fruity.

On sunny and warm weekends the area hums with young flâneurs, and as much as the wineries get their share of sippers and sniffers, the small craft brewery outsmarted the State law prohibiting making of food on the liquor making estates by offering snacks at their Food Truck. A six-yar-old brainchild of two beer-loving college friends, the micro brewery now makes a widely creative assortment of beer. Working with local farmers who grow their grains for malt makes them ultra-local. Being from the Czech republic, strangely I am not a huge beer fan, although I have my favourites at monasteries in Prague, I did not like any of the beers except the slightly sweet Guiness style Black Duck Porter with hints of molasses, roasted cocoa and coffee flavours. 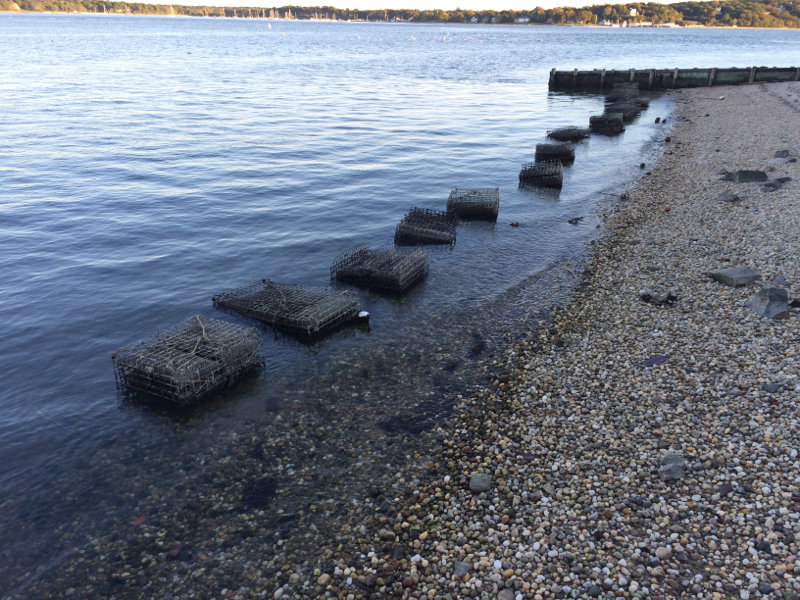 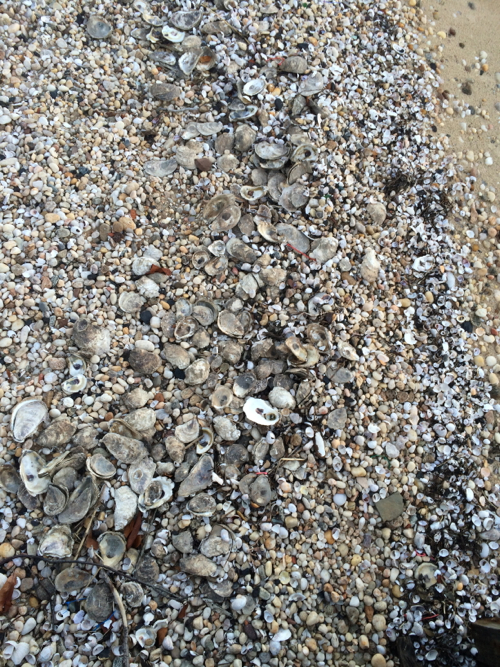 New York state used to produce and consume a huge amount of wild oysters until the 1960s. Today the seabound village port of Greenport still harnesses the most of the crème from the local small scale production, and the top New York chefs recognise it. Anyone from Eric Rippert at Le Bernardin, 11 Madison, Annissa, to popular eateries like Balthazar, the food emporium Eataly and many others order the Widow’s Hole oysters.
The neighboring waters were known as the “oysterponds” feeding New York city of the 19th century. These sustainable sea shells (they consume CO2) like cool and constant temperature and now only left handed Virginia oyster is allowed on this coast because of diseases from other oysters. The owners Mike and Isable Osinski stressed that; “It is best though to leave the oysters out on sun since the dryness outside of water kills many bacteria.“
Our timing could not have been more ideal, since the harvest season starts in the fall and runs till January. The family members shelled a perfect aperitif amount of superb fresh oysters for us to slurp with our case of Sauvignon Blanc that we got from the generous Macari winery.
What a day! We got back to Manhattan exhausted, but relaxed after such a discovery day gourmandising in the nature.