"Herbs and spices like anise, coriander, caraway were allegedly first used in the Ancient Egypt. "

The authors Magda Mehdawy and graphic designer Amr Hussein put together a very intriguing book about the history of eating during the Pharaonic era in ancient Egypt. It is not just an exhilarating read for foodies, but the clean and self-explanatory design will captivate any reader curious about the people who gave birth to the mighty pyramids. I gulped the entire content during my six-hour flight from New York to London.
Mehdavy is an archeologist living in Alexandria where she focuses her research on ancient Egyptian eating, therefore she is the voice to respect when this topic is discussed.
The pharaoh’s tombs whisper through the engraved hieroglyphs on their robust walls about daily lives of Egyptians. With their ancient accent the pictorial letters as well as artful depictions of cultivation, procurement, and preparation of food, eating it as well as celebrating and honoring gods through edible sacrifices, are the only valid witnesses to how life in Egypt was in its peak. Religious rites usually conducted by the Pharaoh since food was offered to the gods as a sacrificial offering.
For example, restriction was an honorable trait that most Egyptians aspired to, and table manners were rigorously followed.
Inside the book, scenes from tomb reliefs accompany your journey through the history of eating in the ancient Egypt as do well-researched objects pictured from the museums around the world. 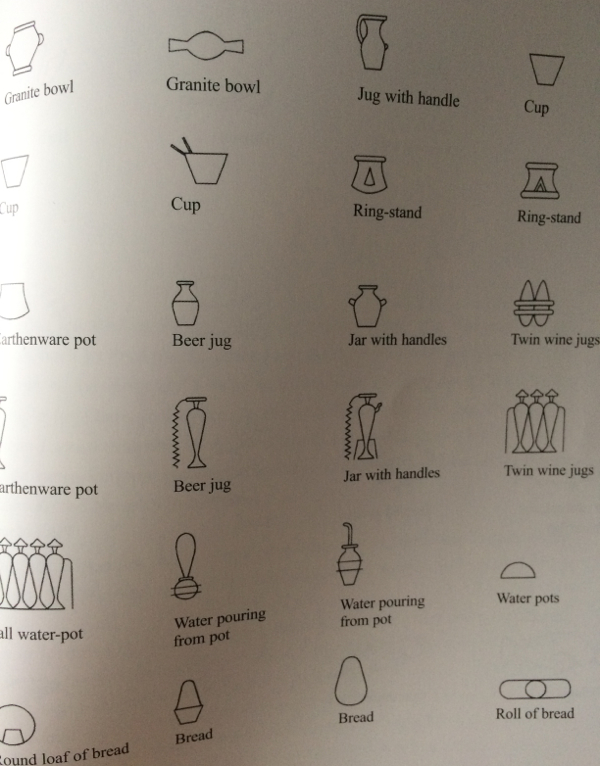 Divided by types of foods to Bread; Eggs and Dairy; Meat; Poultry; Fish; Vegetables; Legumes; Fruits and Desserts; and Beverages – each chapter documents the role in the ancients’ nourishment, society, how it was cooked and how it is used today.
Bread played the leading role in any ancient culture, Egypt including. There were as many types of bread as there are varieties of cupcakes today. Imagine a “Lotus Bread”. Then it was “a thin sheet of dough” or like today Upper Egypt “it was a thick loaf like the shamsi or sun bread“. Recipes are included in the book. Barley was used as the main grain for flour and later it was replaced by emmer wheat. While modern milling and refining of flour preserves it, they would hand grind only the amount of the grains on a stone for a day, so it wouldn’t spoil.
Animals were usually fed with leftover bread or “discs of kosb made specifically for that purpose“. Kosb were residues from oil extraction. Hunting was a popular pastime of the royals. Boomerangs were thrown out to hunt birds and, to add more drama to our modern imagination, various sophisticated traps were used. This way wild bulls, cows, deer,  gazelles, mountain goats, rams, and rabbits were captured. Duck and geese were popular at the banquets of the high-status people like the kings and priests. However, it was rather rare to eat meat since there were no methods of preserving it for a long time.
Preservation of food was as crucial then as it is today. Since refrigeration was not invented until about the last century, the ancient people had their own ways. Fish was preserved by salting and drying. Roe was extracted as a delicacy.
Raw onions were the staple vegetables of the Egyptian diet. Used also as a medicine like other foods such as lettuce that was “believed to aid fertility and was thus considered as a symbol for the god of fertility.” While a juice from radish was thought to benefit the heart.
Herbs and spices like anise, coriander, caraway were allegedly first used in the Ancient Egypt. Olive oil, sunflower oil, but also caraway, linen (flax) oil, sesame as well as oil extracted from lettuce! were used not just for food but also for mummification and as medicine.
Okra was and still is the most widely used green ingredient, although lotus root and  jew’s mallow were also popular.
Grapes were the king of fruits – eaten fresh, dried to raisins or preserved as wine. Fruit wine  was also made from lotus blossom, berries, melons, pomegranate, sycomore fruit, dates, and figs.
In the realm of drinking, carob or doum drinks are still popular as is unfermented bouza (barley drink). Soaked and with honey sweetened hibiscus and boiled tamarind infusions are the healthy herbal drink choices.
The book’s research culminates with recipes adjusted to a modern-day cook. These evolved from the pharaonic cooking techniques and ingredients and are still enjoyed by the Egyptians. Ingredients that were not known to the ancients like sugar, tomatoes, lemon, chili, chicken, tiger nuts, walnuts etc. are now also being often used in cooking.
Exact recipes were not found from that era, so the experts could only logically deduce from assembling all the facts they had what was used together. This is perhaps the weakest point of the book, it cannot be certain about the ingredients combinations used then.
To their credit, the authors cast light on the different regional cuisines that evolved from the cultural influences around them. Lower Egypt and the Nile’s Delta were influenced by Greeks and Romas, and later by Islamic and Ottoman invasions. The more traditional Upper Egypt and Nubia have probably remained very similar to what you will find in these regions today. Simple foods with just a few ingredients and minimum spicing define this region still today.
Any curious mind, not just history hobbyists will enjoy peaking at the hieroglyphic depictions related to food and dining or try to cook by Egypt-inspired meal.