Bistronomy was set afire when chef Gregory Marchand opened his contemporary bistro in Paris. As Frenchie London joins in, there is a flame of hope for French cuisine.

Embracing the outside world is the new Parisian attitude. At least in culinary terms. This means being influenced by global cuisines of the chef’s travels while using local, superb ingredients. Not just in high dining, but also in the more casual setting. Bistronomy was set afire when chef Gregory Marchand opened his new, contemporary bistro on Rue du Nil of Paris. Now, the entire street has been transformed. Just taste what great food can do! Boarding from Paris to London and New York, through to Spain and even embracing the Asian allure of Hong Kong, the chef Marchand sprinkles herbs, bright shoots and flowers on each plate and the house cocktails, while pours ideas he memorised on these trips into his ever-changing creations at Frenchie. 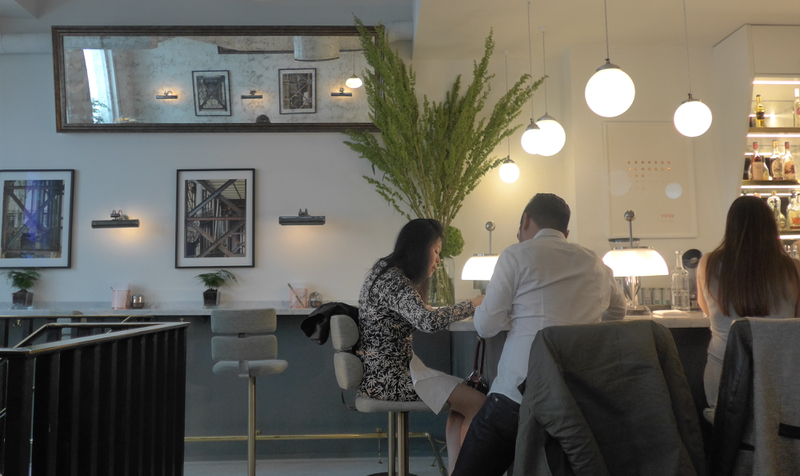 The food at Frenchie in London is about as much traditionally French as the French fries (the hearsay claims that they were made at first in Belgium). Although the ingredients also come from the land of Gals, at London’s Frenchie most of the produce is sourced locally from the British soil and pasture. Some foie gras and cheese swims across the Channel. In Paris, I have dined at the simple, old school bistro and yes, we had plenty of the fries, perfectly crisp and a huge beef board to share with friends and our delectable bottles of wine, so when the trendsetter crossed the English channel, I was lured in. Frenchie was a nickname of the restaurant’s founding chef when he cooked in the kitchens of Jamie Olivier’s Fifteen, it stuck, and as I found out it continues to flatter his reputation.

Frenchie: set for everyone to never get you bored

On the three, very different occasions I dined at Frenchie, I learned that everything, the food, the wine list and even some cocktails constantly evolve. Naturally, through seasonal ingredients and the chefs’ daily playful discovery in the open kitchen downstairs. The only thing that does not change is the enthusiasm of the staff for their work and the customer. The classy but modern interior has also remained untouched, except perhaps for the floral decoration that is regularly refreshed.

There are three different seating styles. For lunch, we dined at the table in the elegant and brightly lit bar room, for dinner with a friend I enjoyed a cozy corner table by the brick wall right by the open kitchen downstairs, and on the most recent occasion I came alone. Demanding a seat (not daring to ask for a table) at 8pm on a Friday night, but the well organised door gentleman squeezed me in. One person’s advantage! I very eagerly accepted the back bar seating, where the cushioned pebble grey stools could not offend anyone. Quickly realising that I was put on the singles wall-facing row of five bar stools right behind the dining bar, I thanked for the thoughtful arrangement of the restaurant manager. Next to me was a single guy ordering a single course of a pig with some vino, while myself, a delicate and quite slender (still!) lady, gorged on three courses with a cheese plate to follow later on. 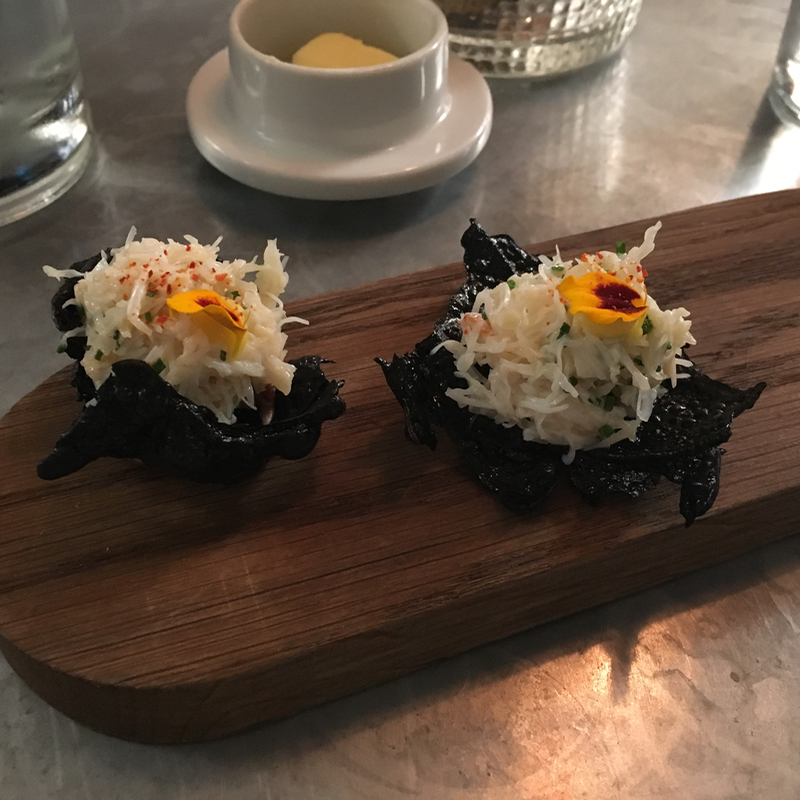 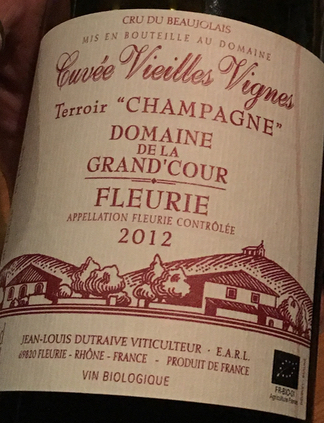 The Crispy Pig head à la local pioneer St John’s, who brought back nose to tail dining to London’s menus, was too adventurous for me. If you do not eat pork, then scan the menu carefully for the potential rogue chunk of bacon here, belly there, or the occasional star appearance of the animal’s head. Although, I am not sure how the chef fitted it into a bite size portion of the snack!? To accompany my aperitif I always start with the small bites since they arrive very quickly. The fresh and delightful fall version of Cornish Crab brightened by Meyer Lemon on a squid ink cracker was as superb as the late spring Cornish Crab with kalamata lemon and wild garlic powder on black rice crackers. Looking same, but being different, that is the heart of the seasonally, and an emotionally changing menu at Frenchie. Last time I switched to Tartelette Duo of Broccoli and Anchovy, carrot and date. The broccoli shavings topping smoky cream in a thin crust crispy tartlet resonated with the “phenomenal” (the wine waiter said so, and I agree) wine like the white blend from the volcanic Tenerife soil made by Suertes del Marques. The mineral and crisp Trenzado-Listan Bianco and Pedro Ximenez also flattered my second bite of an orange carrot cream with an earthy and nutty crumble served in a more robust puff pastry.

Unlike in Paris, the bread with organic salted butter, are optional. For £2.50 you get slices of sourdough baked by Mikael Jonsson’s Hedone in West London. Surprisingly, it has been always better than when I had it during the long gastronomic feast at Hedone (the food brought some mixed satisfaction, but the service there was just not up to the par of a Michelin restaurant). Each time I nibbled on it at Frenchie, it was served perfectly warm with a moist centre enrobed in a very crunchy brown crust. 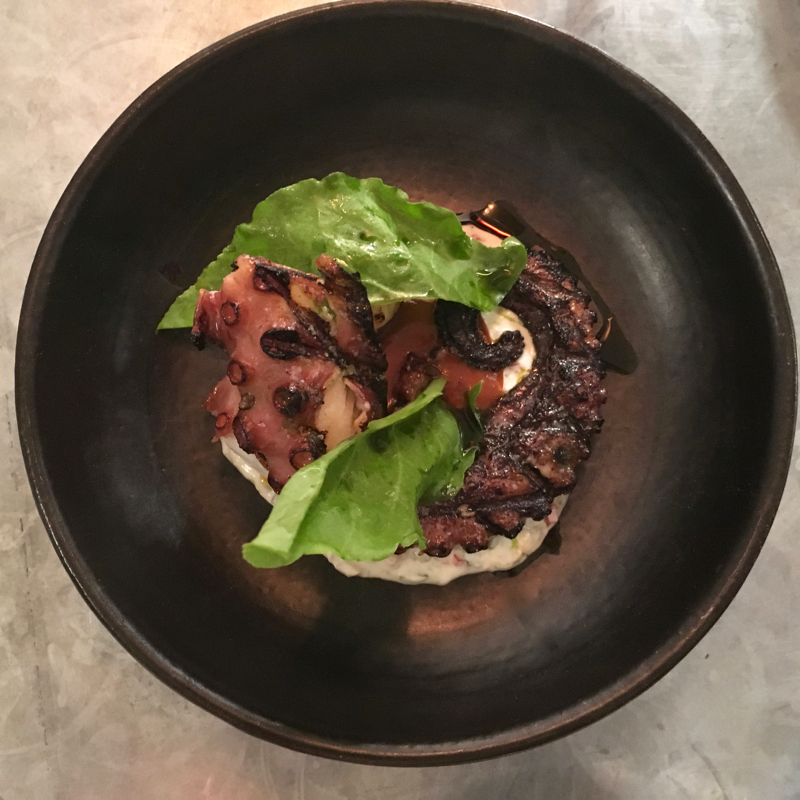 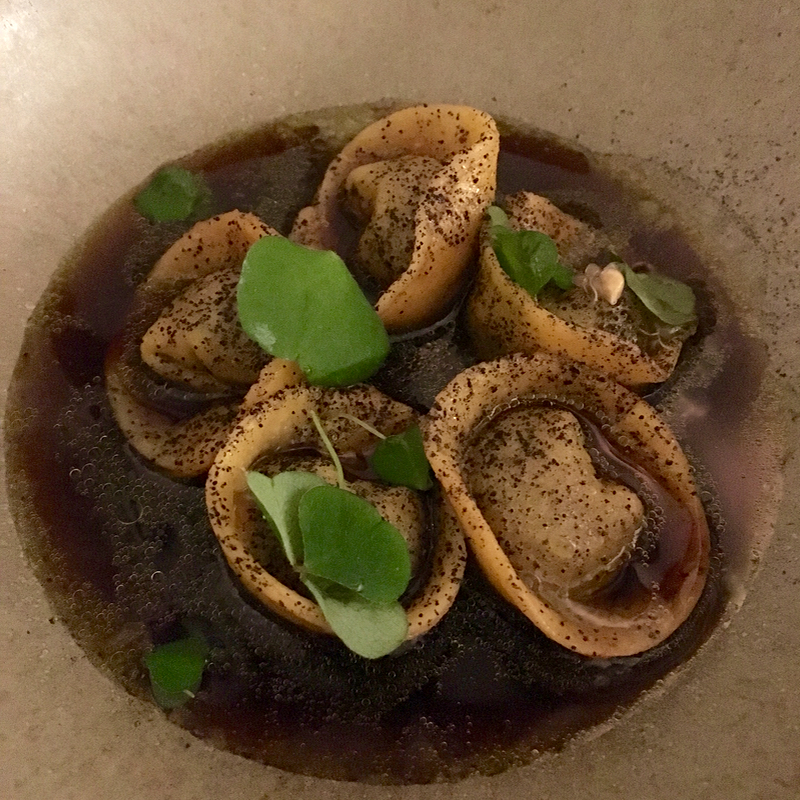 In the Italian mantra of the First (Primi) course before the Main plates, a pasta, seafood or other slightly smaller filler can be ordered. The Grilled Octopus is brilliant, crunchy and meaty as it ideally should be, plated with Smoked Greek Yogurt, Pickled Gherkins & Sobrasada. The intense, Smoked Arctic Char Tartare, was recommended by the waiter, and with the help of another glass of white wine, I enjoyed the blend of the raw char with intensely savoury chops of Sicilian Lemon & Granny Smith apples, covered under ultra-green Chive Sabayon. So rich! Although the apple fruity German Riesling by Peter Lauer pairs great with the raw smoked char, the Spanish Domino de Bebei, La Lapola blend of Godello, Albarino and Dona Blanca from Galicia stole my heart. A deep, loving and embracing warmth. 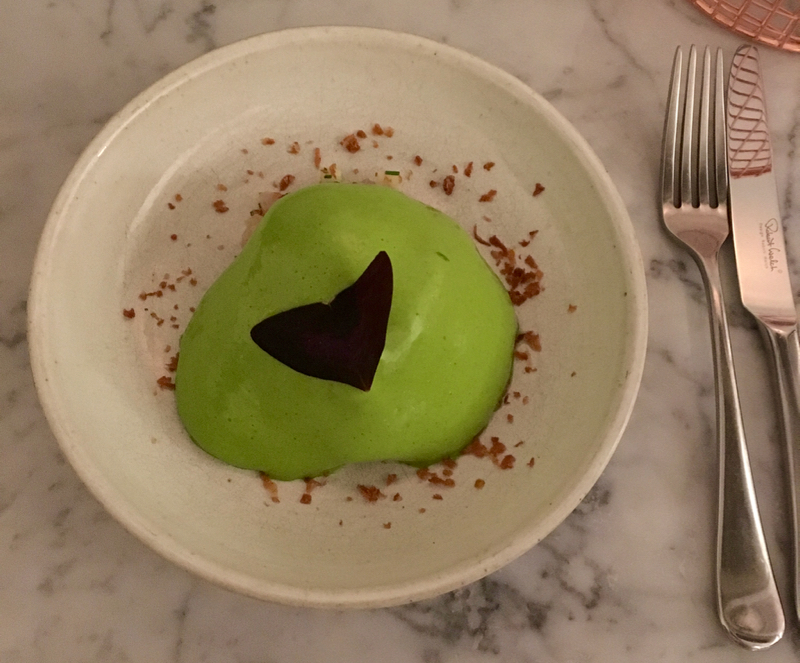 The chef loves smoking food! One vegetarian main course is served with smoked egg yolk😳, but I went for pasta. And, glad I was! The plate of Tortellini stuffed with ricotta and trumpet mushrooms arrived and then waiter poured over a warm finger limes, mushroom, rich and slightly smokey intense lapsang souchong tea broth. Al dente cooked, dusted with mushroom powder and zesty raw greens, the broth brought a perfect balance through its acidic finger lime freshness and the rich mushroom oil-touched broth. 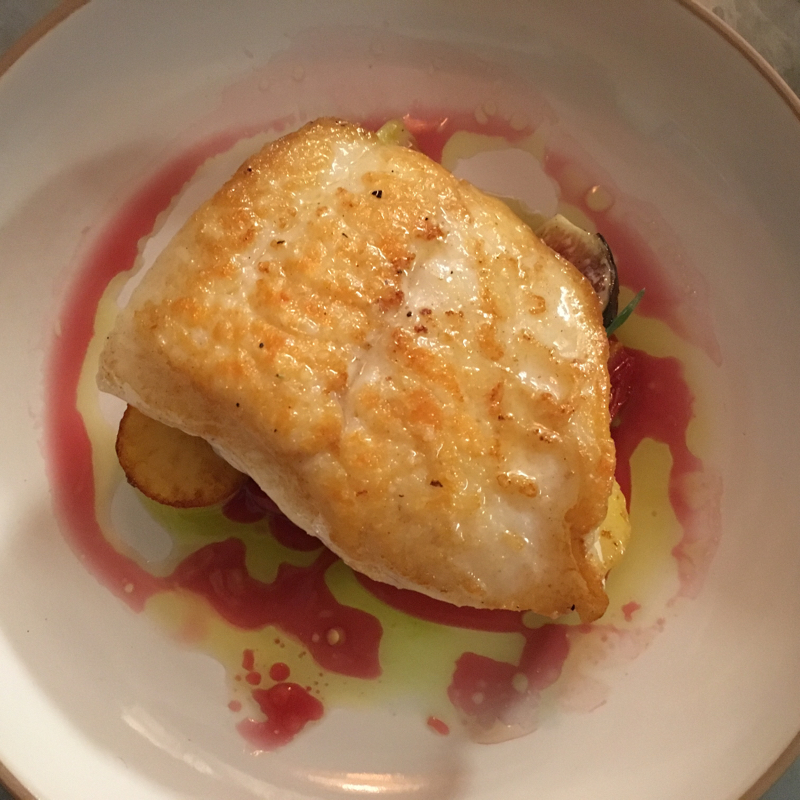 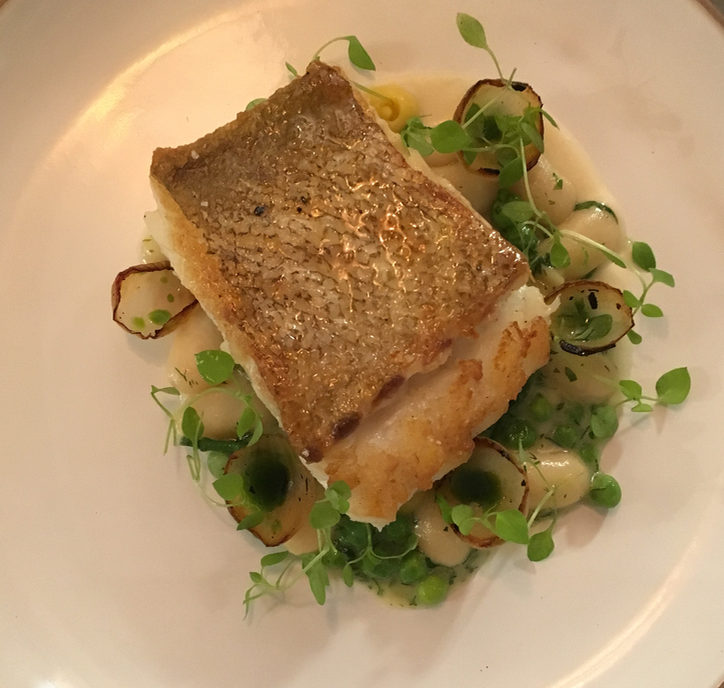 From the mains, the fish changes regularly according to local catch and the creative whims of the chef. I had a seared Cornish Turbot, Tomato, fresh Figs, Muscat Grapes and Tarragon in September, while in October my friend had John Dory served with cavolo nero, cockles, and kaffir lime Beurre Blanc. There is always some bird, very English, and pork appears regularly on the menu. A four-course tasting for dinner is always available or for lunch two or three-course lunch deal comes with a lower price. Only one cheese has been served each time I ventured in – the orange-hued hard cows French Mimolette by Jean-François Dubois. I know it is mostly about simplicity here, but as a cheese lover, I would welcome other perhaps some British cheese?

On the sweet side of the palate, who would resist the Bitter Chocolate, hazelnut crumble with smoked bacon ice cream? Not me, and I tell you, chocoholics beware, this is a highly addictive earthen bowl of pleasure. The bacon gelato is a spot on! 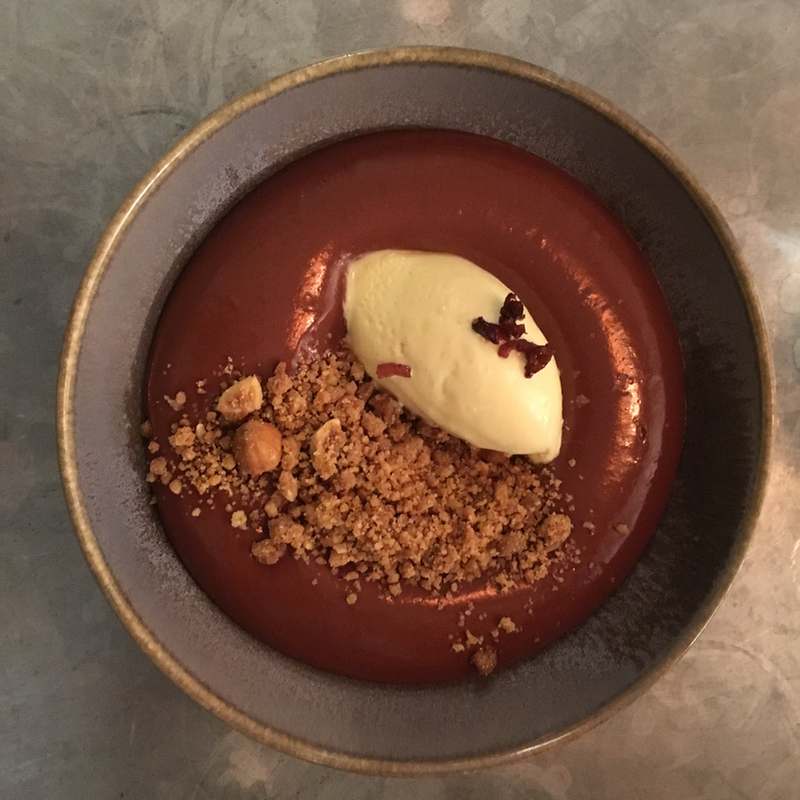 This is London, so the drinks are very interesting and well sourced. To par above the local course, the cocktails are mixed to stir a small talk into a turbulent affair, while the extensive selection of wines by the glass, each offered to sample before you buy, with some older vintages, poured from the Coravin,… I appreciate the breadth, and the chef probably applauds the flexible liquid offering so any slight changes on his plates (rather common here) accommodate the wine pairing for each plate. The by extensive knowledge equipped staff is on hand to advise. Lately, I enjoyed the bounty born in the Volcanic soil of Tenerife. The mineral clarity of Trenzado was imprinted in my memory over the apple-scented Riesling and from reds, the well aged Greek Oikonomou Sitia would fool an aged Bordeaux lover. Poured from Coravin, it had a more age on it the mature tannins to match the earthy flavours of my mushroom pasta dish.

As the Frenchie Covent Garden joined the family of its four food and wine hipsters in Paris, there is a new flame of hope for the much needed millennial transformation of the French cuisine. Seemingly asleep in the past century of white table cloth, formality and gimmicky complexity, now simple, nature highlighting and produce-driven cuisine is being awarded the attention it deserves. The young generation of French chefs nonchalantly drives the revolution, no pressure, just great edible ideas, that is all.

Join our Community to receive our monthly inspirations