Even in London, late fall will fuse into an even colder winter soon, so snug in close inside this tight and cosy café where porridge, made to an utmost perfection in various seasonal tunings, is the king.

Dig into a bowl of wholesome porridge on a bone cold London day. At 26 Grains, hug the warm bowl with your shivering fingers and be comforted since there is probably nothing more nourishing to savour in these cold days. Even in London, late fall will fuse into an even colder winter soon, so snug in close inside this tight and cosy café where porridge, made to an utmost perfection in various seasonal tunings, is the king. 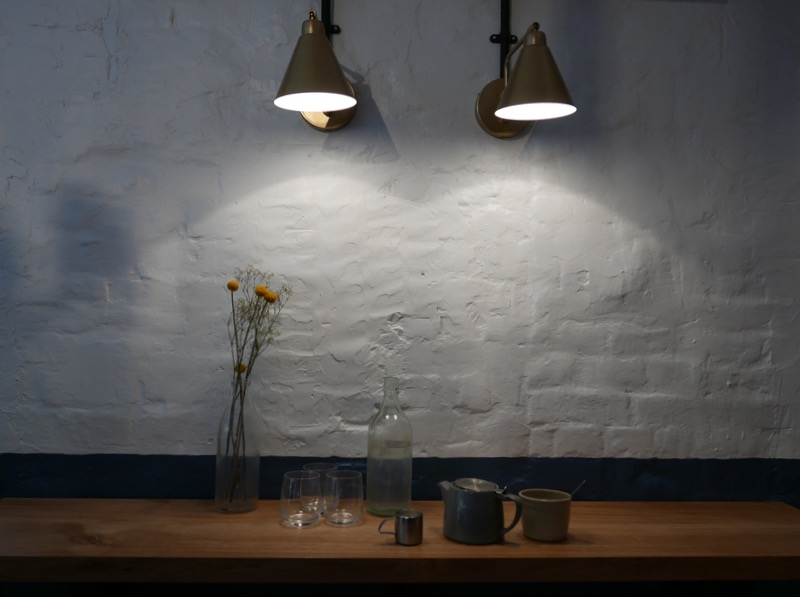 26 Grains: From a pop-up in East London to the epicentre of the foodie Covent Garden

Nordic cooking of making quality and simple food, not only from 26 Grains as the name of her business would suggest (the number is just her favourite), but from a chosen array of minimally processed complex carbohydrates rich in protein, vitamins and minerals such as amaranth, buckwheat, oats and rye.

26 Grains is the antithesis of a stressed out Michelin stared kitchen full of cursing men. Leaving the adrenalin aside, this casual cafeteria offers a la minute delicious food made by a purely female staff whisking porridge in sizzling pots, assembling fruits, homemade jams, seeds, nuts and other now desired healthy ingredients such as cocoa nibs, coconut yogurt or turmeric on the top. The cherished bowls of home feeling are nevertheless a bit fancier than your typical oatmeal at breakfast. 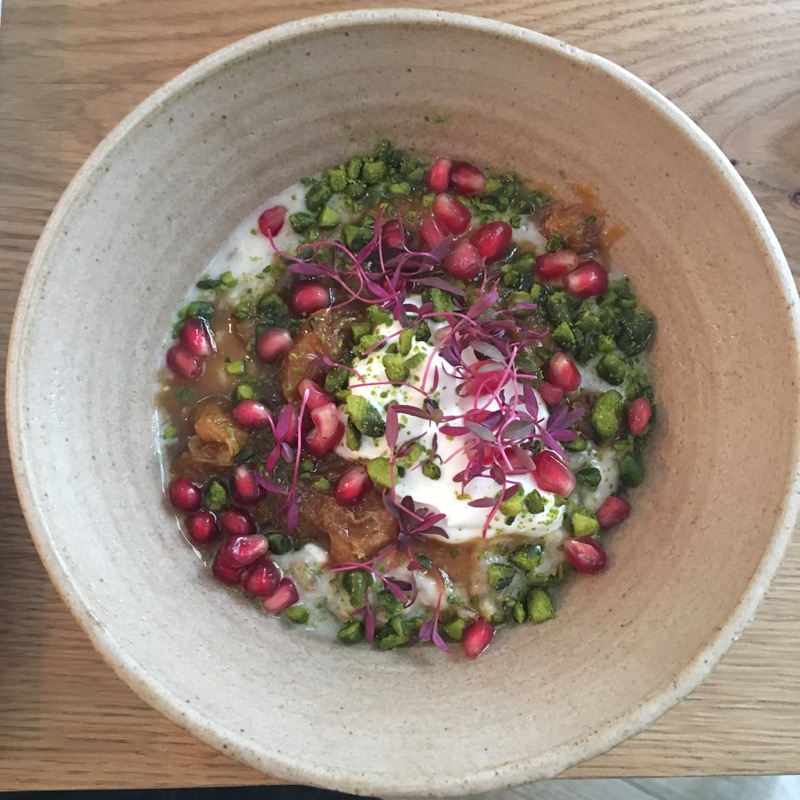 From rolling the oats freshly in-house to keep the aroma of the released aromatic oils to soaking them overnight to break down the bloating phytic acid and to ease their digestion, this porridge is created to nourish your body for the day. Right by the window, you can see the hands-on machine for the oats to be roll pressed on the spot when needed. Cotswolds flour and bags of mostly organic grains are stacked around for a totally transparent ingredient route. Using spices like cardamom, cinnamon, ginger and turmeric to add flavour instead of the nutrient poor sugar and too much of the blood pressure rising salt, adds healthy points for any naysayer still challenging the nourishing mission of 26 Grains. Dairy milk is substituted by an easily digestible almond or coconut alternative (by Rude Health), organic dairy or almond butter from Biona and a little date or maple syrup or in most dishes coconut palm sugar is used in the sweet versions. In the mood for something savoury? Then Oats with kale, egg, avocado, chives and shirracha chilli sauce will fill you up. The porridge is served in earthenware plain bowls all day long while the lunch bowls are released at noon. From the staples the Nordic Pear, Coconut Milk Oats, Spices, Seeds, Cacao Crumble, Coconut Yogurt and Maple syrup is still a success, but since I do not digest pears well I went for the Almond Milk oats and rye, Roasted quince, Pecans, with a scoop of Orange Greek Yogurt and Pomegranate seeds, topped like everything else with purple sprouts. Hazelnut & Butter,the best selling Blueberry or Banana Cacao porridge also appear on the menu in their different seasonal coats. In November, I tried the superb mildly sweet Orange compote and Cardamon with Pistachios and a scoop of dense greek yogurt.

The buckwheat based Banana Bread is naturally gluten free. Alex published a cookbook in which hazelnuts are used, but sometimes at the café they substitute them with almonds. You get two toasted slices with a pour of a slightly sour coconut yoghurt, raw crushed cocoa nibs and the lively purple sprouts. I couldn’t resist to eat them both after I spooned out the entire porridge bowl.

You can also have a simple Avocado on rye bread or to snack sweet on the Orange and Cardamom Loaf, Pear Tart Tatin, Salted Rye Brownie or raw sweet balls of Date Cacao or Turmeric Sesame Bite. 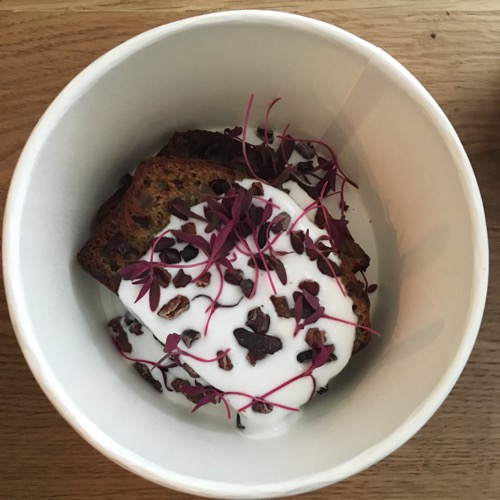 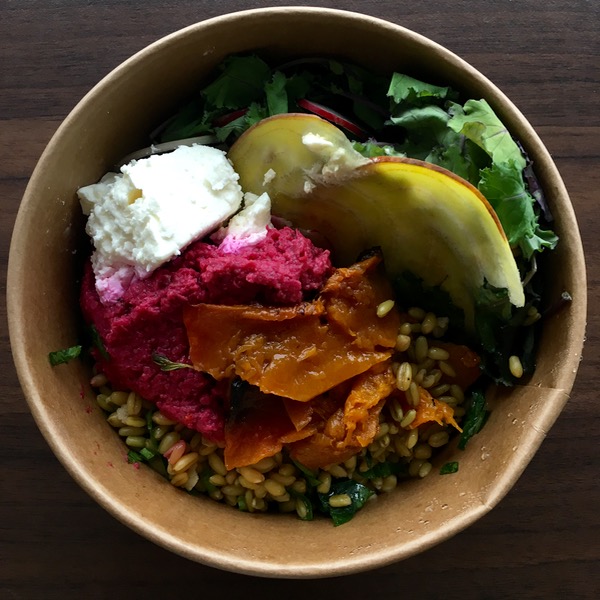 Anything is also available for a take-away in recycled paper cups. Needing to warm up and to sate my sweet tooth I picked a small cup of Hot chocolate with turmeric, cinnamon and almond milk one afternoon. I like its dense texture, but the warming effect was more pronounced in the superbly indulgent Turmeric latte that I sipped a week before. Coffee and Good and Proper loose leaf tea, Chai Latte including, to elevate your caffeine intake or the particularly tasting bottle of refreshing Turmeric and Tamarind Tonic from the London-based Jamu Kitchen complete the beverage offering.

The snug place is packed for most of the day, 26 Grains even became trendy – porridge, look at her! Sit casually on one of the seven stools lining the kitchen counter, or facing the blanc et industriel rustic wall, two communal tables inside or if the rare London sun shines and warms the Neal’s Yard, tan your face and dig into your bowl in the courtyard. During the week it is more in between work quick lunch kind of place, but on weekend mornings a cool crowd of foodies rolls inside. Relishing in the smooth music here, with the guitarist pulling his strings in the auditory background, magically pacifies the beehive busy cantine. Funnelling in a relaxed mood, inhale the fragrance of cardamom, the vanilla or the seductive scent of cinnamon and dig in. This wholesome porridge may be the best thing you ate in the entire day. 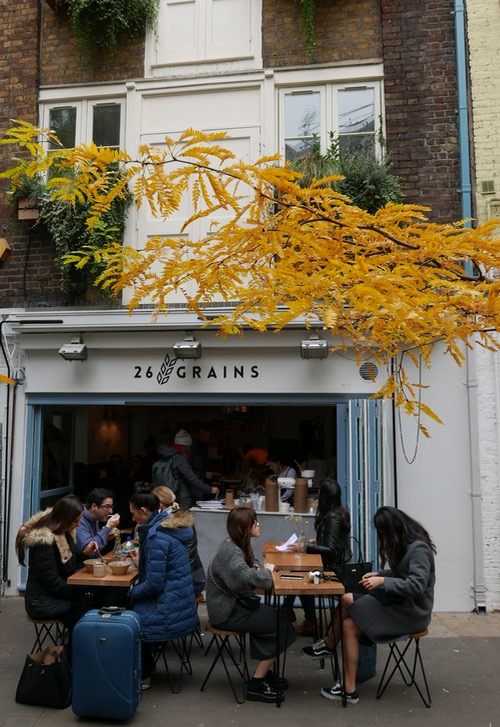 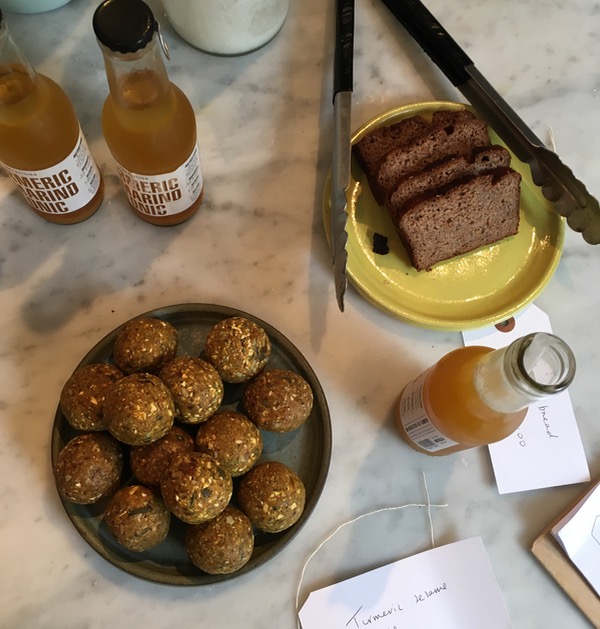 If you dine alone, you can skim through and find an inspiration in the 26 Grains cookbook that lingers freely on the tables. The pure white design of the cookbook is filled with authentic Instagram style photos taken by a sister of Alex. It contains 100 grain-focused recipes from oats to amaranth in the breakfast porridges, salad bowls to nourishing warm dinners with fish, abundant seasonal vegetables and some highly hedonistic crumbled cheese. Porridge is so timeless that 26 Grains will be surely there to nourish Londoners for the years to come. Far from being just the current season’s fad that like the frozen yogurt outlets dot every Soho corner until we all get too tired of it or it gets so cold that your brain says no no, keep warm and eat porridge.