The market is a window to contemporary London gourmet scene, which has become more international than ever. Join in and savour the pre-Brexit flavours of the city now.

It is a regular weekend in the Borough of Southwark, South of the Thames, and the attention of London turns to delectable cravings. As the liberated clock of the weekend ticks, London foodies now tramp further beyond the exciting and proportionately overcrowded Borough Market to the multi-ethnic and more street swish Maltby Street Market. Seeking more authentic purchases, all of us may find some culinary inspiration there, but mainly the market is a window to the contemporary London gourmet scene. Although London is still the most international city of Europe and as touristy as ever, the post-Brexit flavours pose question marks. What you get at the Maltby Street Market is ready to eat international food, rather than raw, locally grown produce. For the locavore experience head to the nearby Brockley Market and Chapel Market in Islington on Saturdays or to the Marylebone Farmers Market on Sundays. Creativity and savvy artisan skills, next to pride are the lungs of the smorgasbord of edible and sipable ideas here in Bermondsey. 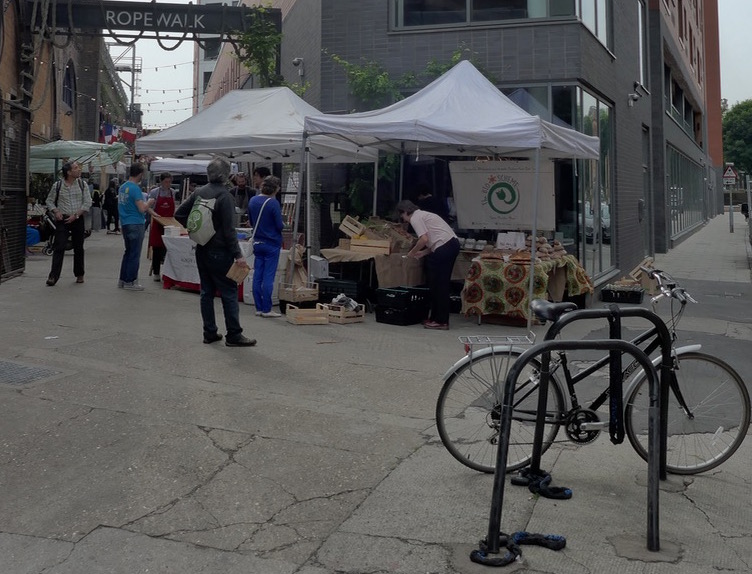 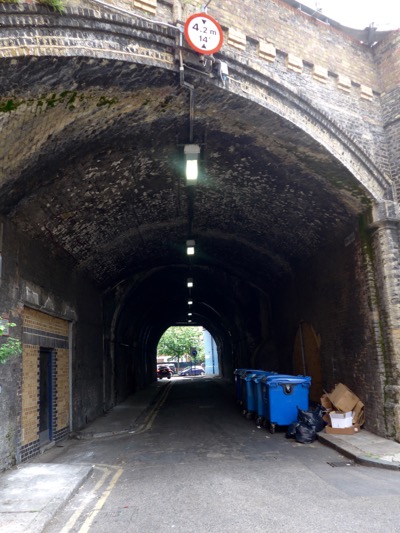 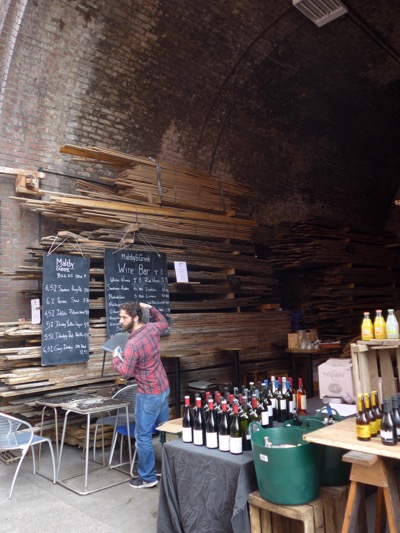 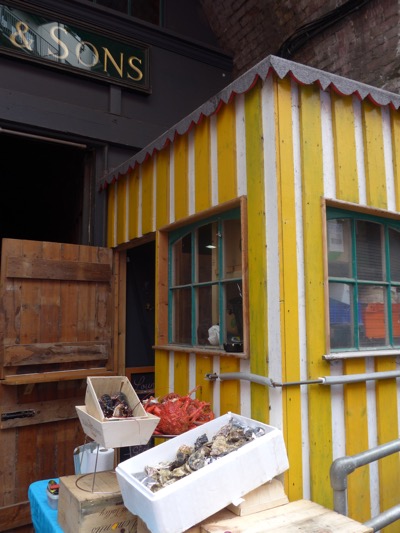 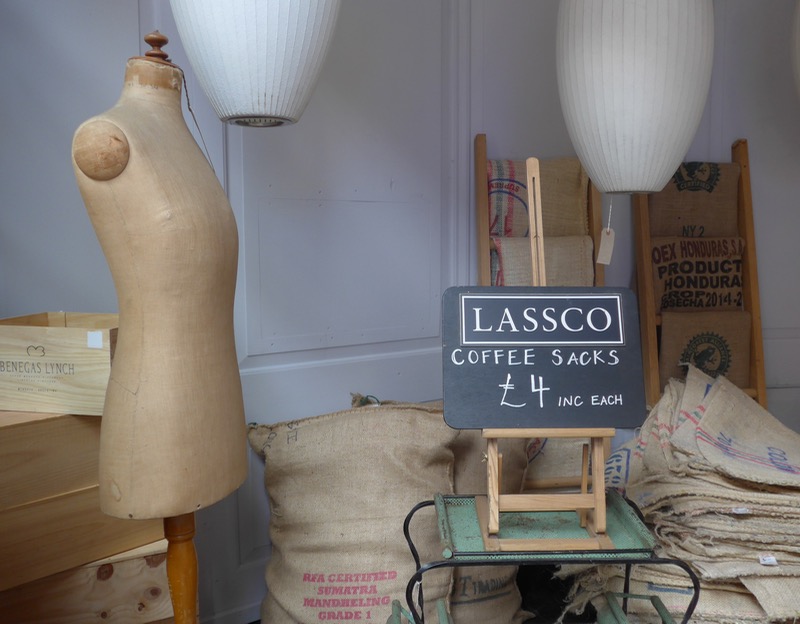 Who, what and when of the Maltby Street Market

The American, Canadian, Japanese, Korean and Scandinavian city food hunters have already flooded in, starting in small streams, but soon they may turn into a tsunami of camera-clad bloggers and travellers. It also depends on the hour and day of your venturing in. The Maltby Street Market is open only on weekends, and if you get out of bed early enough, you will be rewarded with some personal space before the crowds swish in around the lunch time. Then the hustle does not stop until the closing hours (4pm) early on Saturday afternoon. Sundays are more of a stroll, so get your brunch buddy out there.
The rustic bars, quick bistros, Francophile cafés, and even restaurants that have installed themselves under the thick browed brick arches of the train bridge, draw in the hungry that crave being well fed while sitting. Lining one side of the Ropewalk they invite for a bite also outside of the weekend market hours. The vendors settled under the archways permanently are:
Legs of jamon and Spanish tapas swirl around at the dimly lit Tozino, while the East London famous bakery outpost St. John Maltby lures in through the ashy fragrance of its freshly baked goods.
Also set under the railway arches from the conception of the market is Maltby & Greek, feeding you with everything Greek, from beer, though wine to small bar style nibbles.
Any midweek sugar cravigs will be sattisfied at the more French patisserie Comptoir Gourmand.
The brain behind the market, Lassco, keeps the green lights for curiosity. Its antique and repurposed furniture store stocks anything from oddities such as chimneys, used coffee sacks and Egyptian sculptures to less oppulent decorative quirks. Serving also as an event space, here, a dinner pop-up by Disappearing Dining Club from Thursday to Saturday casually attracts the other kind of experience seeking crowds. 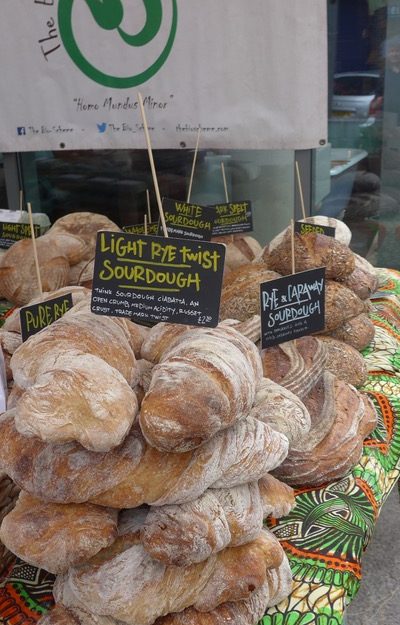 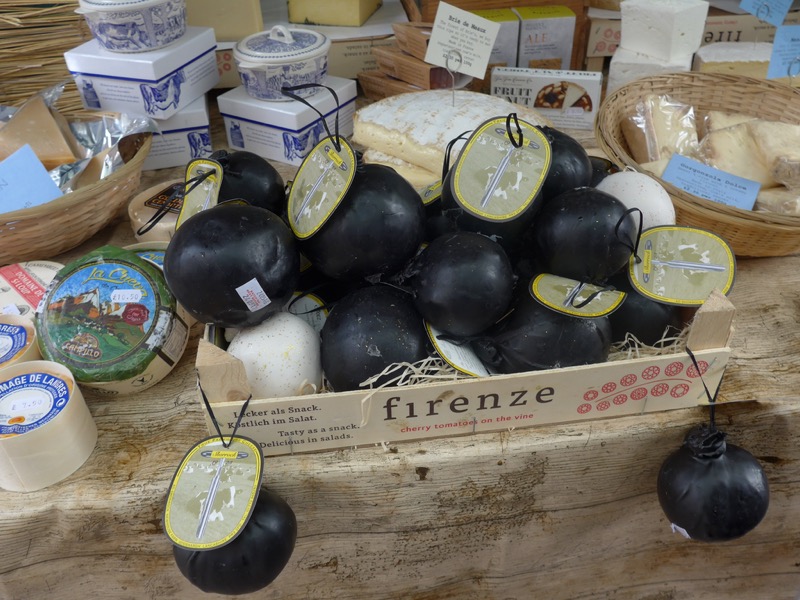 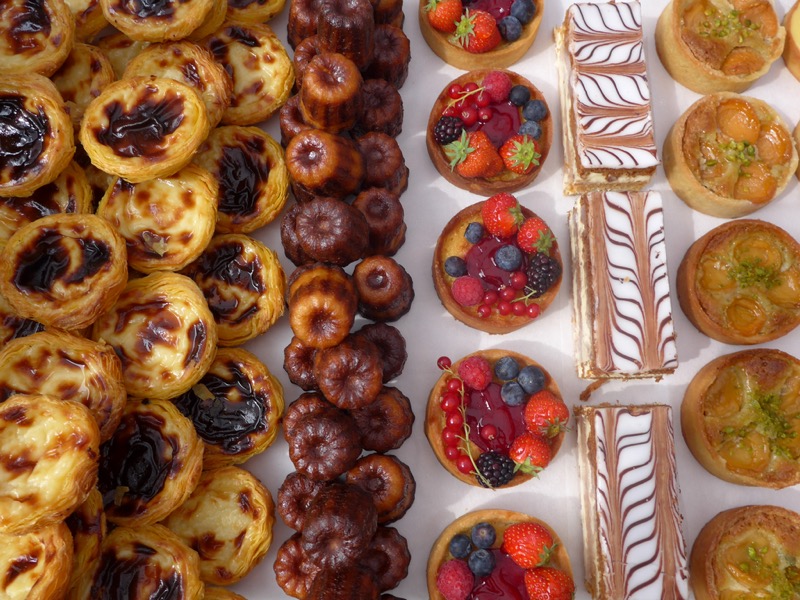 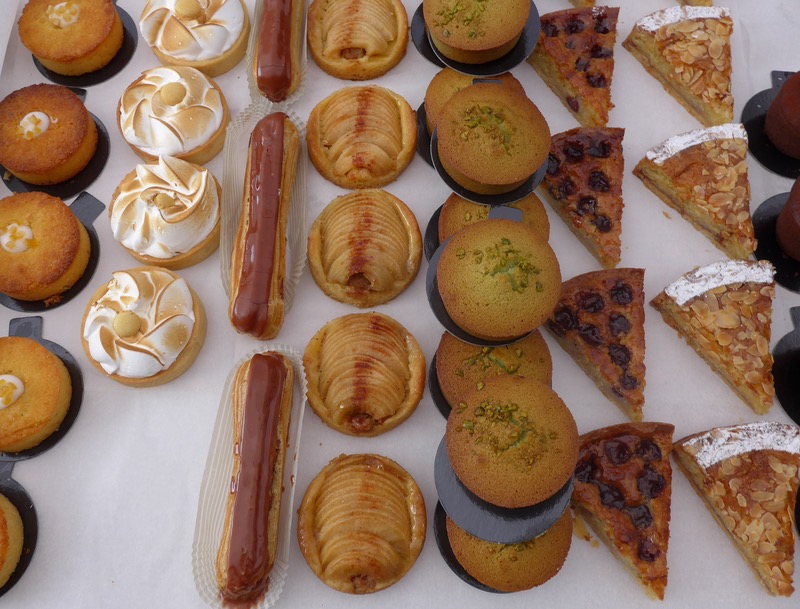 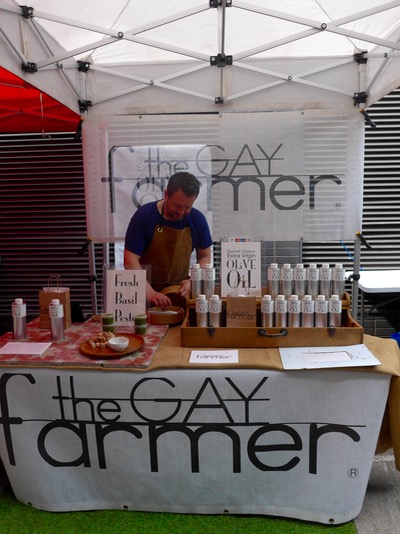 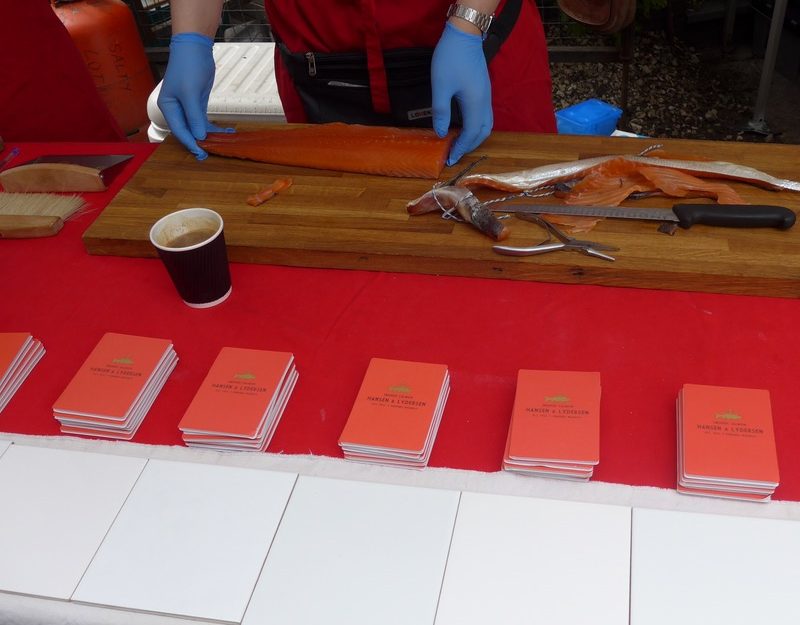 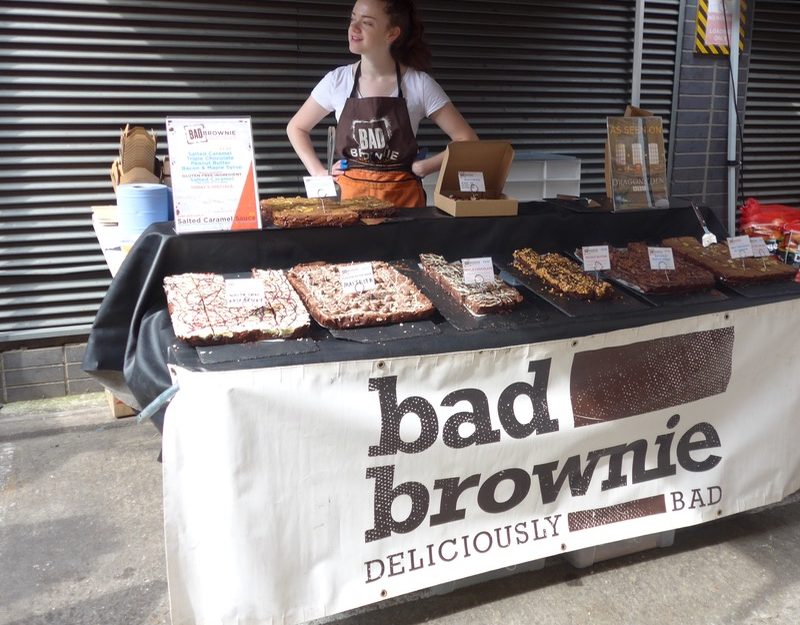 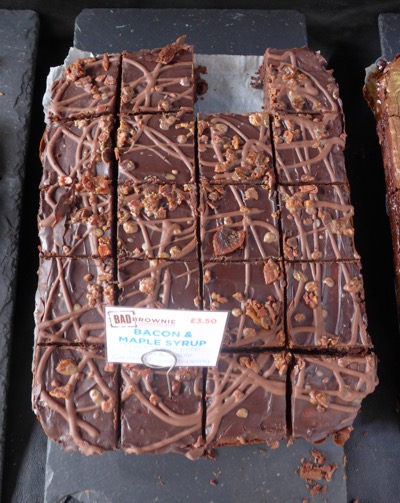 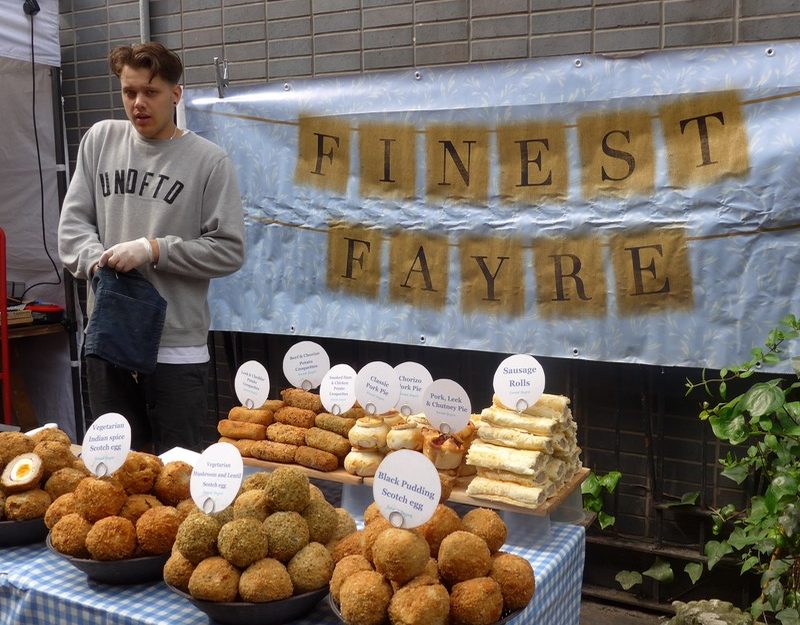 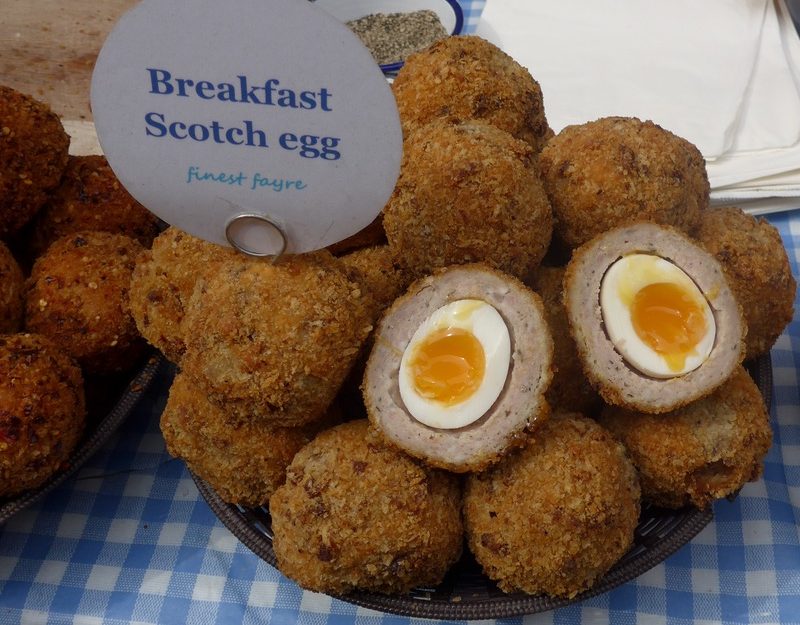 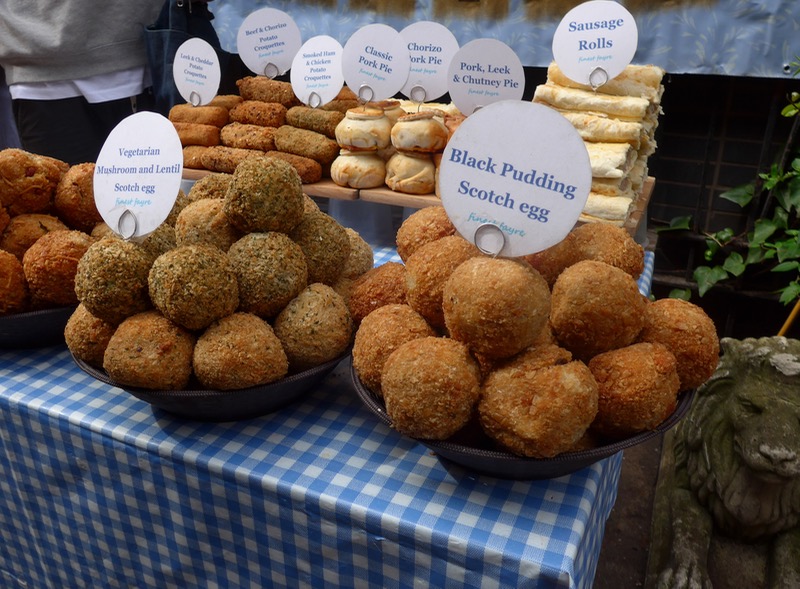 London’s cultural diversity on one plate

Judging from the line, very popular with foreigners seemed the various twists on the handmade Scotch eggs (Finest Fayre), while the buttery smoked Norwegian salmon by Hansen & Lydersen was impecably cut in front of you. Tasty hits were imported from far-away countries. Thai coffee is sold in plastic bags, which is sweet iced condensed milky coffee. Made from Beanbag Coffee beans that were ethically sourced from plantations in Asia, so you are assured that the farmers are paid a fair price. Have a banana or why not a spoonful of gooey almond butter in your coffee, yes, these guys challenge your typical London cuppa.
While, popups are now more common at the market, some of the artisans allowed for their roots to settle deep in the Maltby Street pavement. The African Volcano burgers and grilled sandwiches also sell bottles of their award-winning peri peri sauce and marinades. Charitable spirit penetrates the vendors’ offerings as 30p for every bottle of his sauce to supporting Habitat for Humanity in Cape Town, South Africa.
Taiwanese egg-shaped dhan waffles are made fresh to order by a wide-smile offering Yi Yun. Like most of the above mentioned vendors, the founder is an ex-pat offering her country’s bounty to the London palates.
In the Asian spirit, Lahpet Burmese Food is a start up of a recruitment veteran Dan Anton, who as you can taste is turing to another page of his life. Lahpet Thohk, their signature fermented tea leaf salad is a crunchy combo of pickled green tea leaves, toasted sesame seeds, fried garlic, roasted peanuts and tomatoes. Worth trying.
Award-winning Bad Brownie (try maple syrup and bacon), cupcakes, French pastry and for the more health-minded organic certified sourdough bread by Bio Scheme dot the stand row.
Olive oil by the Gay Farmer is not made from olives grown in England, but he picks them personally and lets you sample them all.
The hip market on the South bank of the Thames has evolved over the years. Like many of the grassroots markets, the people frequenting and shopping there are now well-heeled families, eco-conscious consumers, trends-seeking youngsters and gourmets of all sorts. The great bargains of my student years are gone even at the mainly immigrant-run fruit and vegetable stalls of the London’s first Chapel Market.
Unfortunately, with the prices up and the trendy attitudes also the authenticity declined and some of the vendors have a scant idea of what they are selling. Inquiring about the cheese at the Maltby Street Market, a young lady told me that she is just offering her bosses produce, so she does not know where it came from. If it only were more local. Set out was Dutch and French, not the Neal’s Yard Dairy produce from the grazing cattle on the British Isles that you can buy either at the nearby BOrough Market or in Covent Garden. Although there is a fish monger and you can gulp fresh oysters, pure produce is needed more at this ready to eat trendy London market.
Sat: 9am-4pm; Sun: 11am-4pm
Ropewalk, London SE1 3PA