The sweetness of the Blackcurrant Sage Flower is incomparable with most sugary desserts. As with a ripe fruit, bite into this deep pink, wide-mouth-open shaped flower, and you will be mesmerised. Its rather deeper purple sister is more berry tasting, and like a Grand Cru wine enchants your palate with an incredibly long journey of flavours.

No space left barren, meaning greens should fill every square metre of the prospering Principality on the coast of the Mediterranean. This blooming idea of the late Prince Rainier of Monaco is now fertile in the mind and the actions of the current Prince Albert II., who gave his thumbs up to the nature inviting philosophy in the Principality of Monaco this year as he personally endorsed the activities of Terre de Monaco. So much better when the plants can be eaten, not just admired visually. The roofs of large condominiums, public gardens, and the rare private land here, all are now being cultivated with a flora so diverse that it would be on par with any major botanical garden. If such a space-restrained country as Monaco can do this, any cosmopolitan urban area can manage so on a much larger scale. Let’s get planting. Wouldn’t it be nice to pick up herbs on your way from work at your local communal garden or stop by an urban farm such as Terre de Monaco and buy any vegetables or fruits that the season offers? Much nicer than crawling inside the afterwork rush hour of the supermarket aisles. Today, it is perhaps more stressful to buy food than to deal with at work stress! 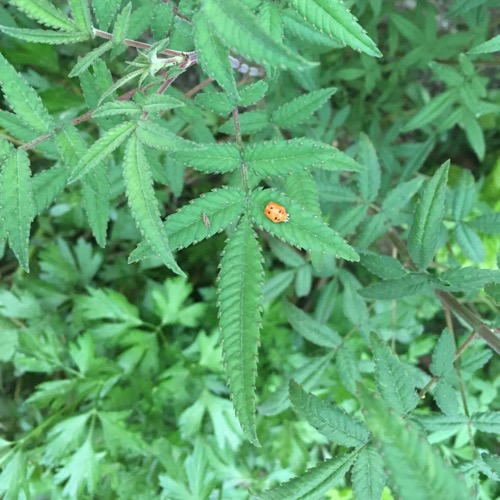 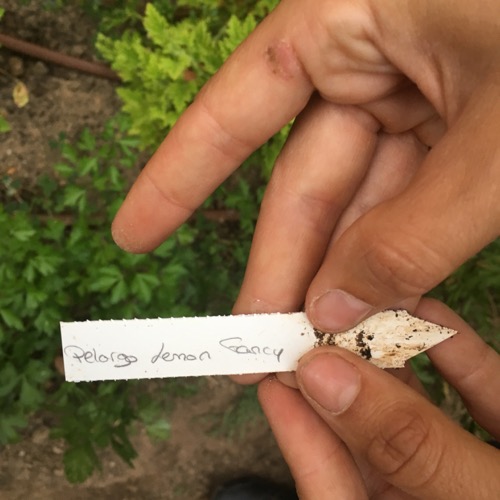 Jessica Sbaraglia, of a Swiss descend is not new to agriculture, and she saw an opportunity to rejuvenate Monaco. With her micro farming business Terre de Monaco, she set to “integrate urban agriculture on rooftops, balconies and surrounding buildings of the Principality of Monaco and surrounding communities”, and selling to the locals residents as well as to restaurants the fresh produce under its own label. Respecting the values of organic farming by buying AB certified seeds and creating a permaculture, meaning a self-sustaining sustainable agricultural environment, are the principles driving the enterprise. Hens and bees are being integrated to fertilise the soil, and now even turtle droppings from the Oceanographic Museum in Monaco are being included, what a genial ecological recycling cooperation! The warm climate requires some form of irrigation, so “an automatic micro-irrigation system powered by electricity from solar panels” waters the gardens. Zero emissions are ensured while water use is being minimised. 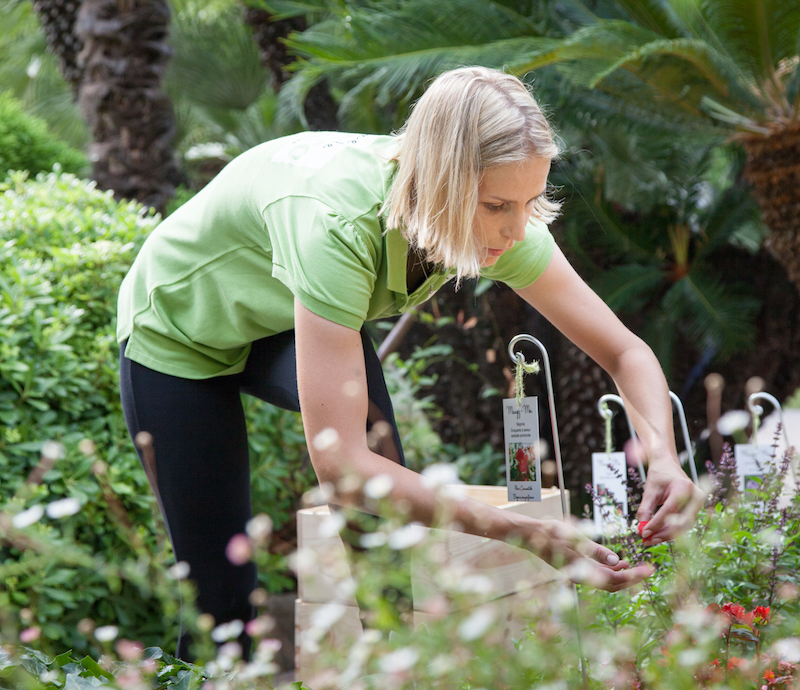 After an efficient and successful crowdfunding campaign (before myself and my friends moved ourselves to contribute, she announced that her goal was reached!), the open doors from the sustainably minded Foundation of Prince Albert II of Monaco donated a small start-up space of just 30m² at Villa Girasole, and later a larger area was secured at the luxurious Monte Carlo Bay Hotel. The fast moving founder established her “potager” right next to the hotel’s inner terrace, where the diners or coffee drinkers now marvel at the greenery. I wonder, why all hotels do not have their own little garden? There is always some space left on the property, and it looks so refreshing!
The herbs are tantalising: so far she grows four types of basil – genovese, purple, thai and lemon; coriander; parsley, tagette lemon, marjoram, four types of sage such as the aromatic pineapple. I am particularly infatuated by the Tagete known also as Marigold Lemon Gem. Its bright green small young leaves are perfumed with an intriguing floral, orangey citrus scent, while its flavour oscillates somewhere between an orange and orange peel. Tagete is a long lasting and intense gustatory experience. Whether you use it in an infusion or in salad, the aroma is quite intense so tame any additional urge to seasoning before tasting.
From the edible flowers, the sweetness of the Blackcurrant Sage Flower is incomparable with most sugary desserts. As with a ripe fruit, bite into this deep pink, wide-mouth-open shaped flower, and you will be mesmerised. Its rather deeper purple sister is more berry tasting, and like a Grand Cru wine enchants your palate with an incredibly long journey of flavours. You must try! Other edible blossoms and leafs such as begonia and South African garlic are seducing the onlookers.
The Michelin stared chef Michel Ravine of Monte Carlo Bay Hotel took up this opportunity of having specialist edible flowers, a wide variety of seasonal vegetables, pulses, and much more grown at his doorstep. And, any plate, whether at a Michelin restaurant or at your home will shine when such colourful floral feast is added. I have tested the produce in my own kitchen, and you can see some results on the photos further bellow. 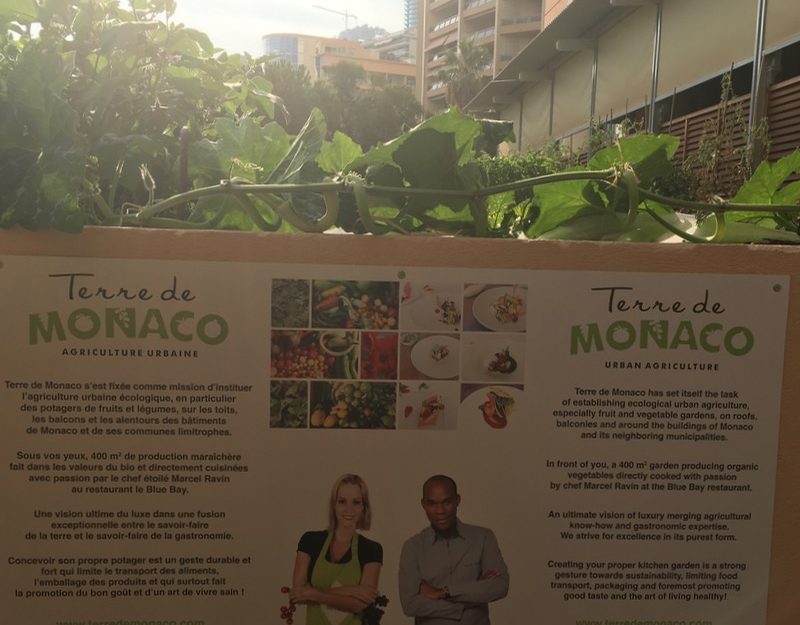 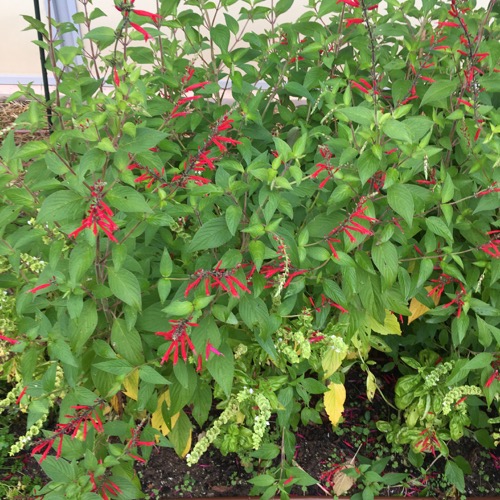 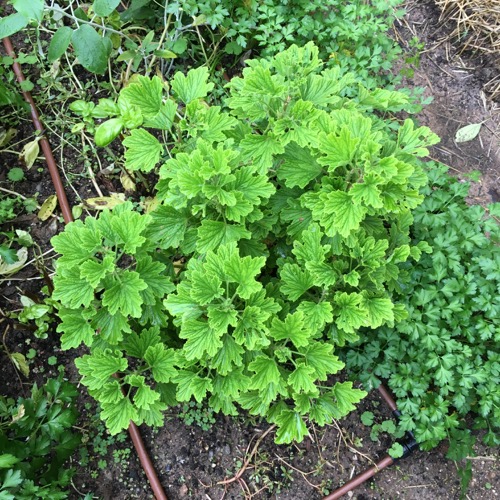 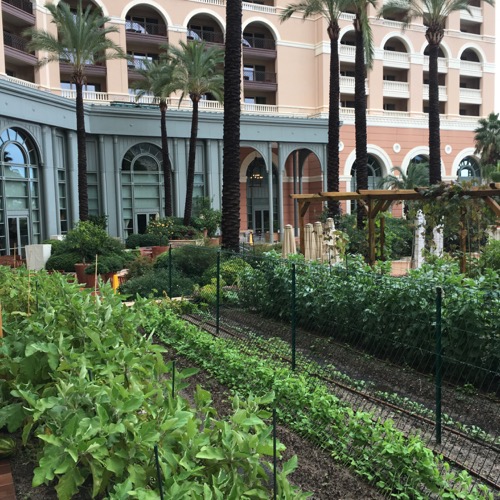 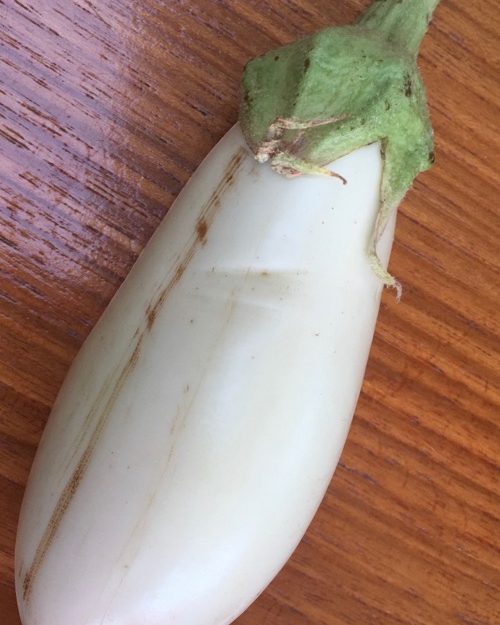 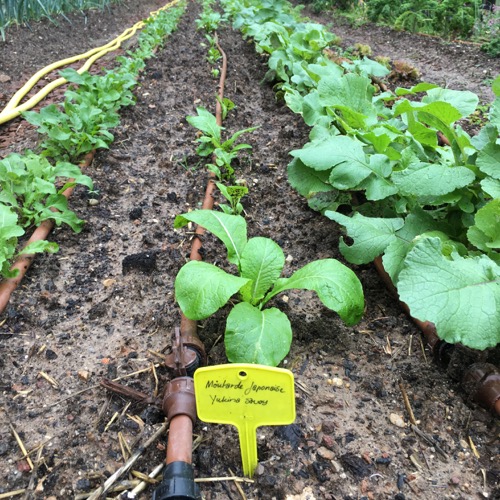 Sustainable food chain: come, see how it is grown and buy

When all the supply to the restaurants is fulfilled (another Michelin restaurant at the Hermitage Hotel is a regular customer), Terre de Monaco offers the produce through its social media (Instagram: terredemonaco; Facebook page; or newsletter on their website). You can just make an appointment and pick whatever your palate desires. In addition to the common seasonal vegetables and some fruit, ready your palate for some never tried before plant delicacies, and all is organic.
For private or public clients with an available space under 100 m², Terre de Monaco further offers to design, development, education and maintenance of their own personalised garden. The last activity is necessary in the multi-national community of the Principality, with prevalent frequent traveling lifestyle. The customised wooden creates are made from recycled wood and the energy efficient irrigation system contribute to “a strong and sustainable act limiting the transport of food, product packaging.” Terre de Monaco also hosts schools and assists in educating the local children about responsible agriculture.

As we approach winter, even in the Mediterranean it gets colder, and the season allows for only certain plants to thrive, give fruits or be in their full flavour expression, unless a greenhouse is being used. Under the mostly clear skies of Monaco you will now get beans, bok choy, white cabbage, eggplant, green peas, purple kale, white, red and the pungent daikon radishes, potatoes, spinach, turnips, winter greens, and still some edible flowers. 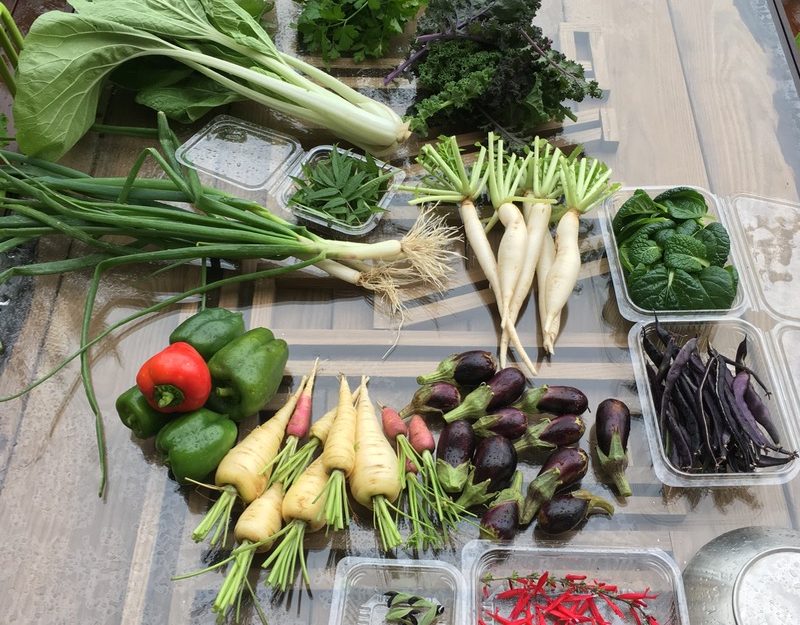 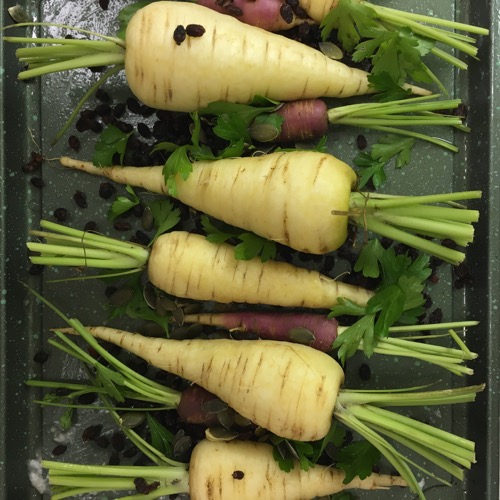 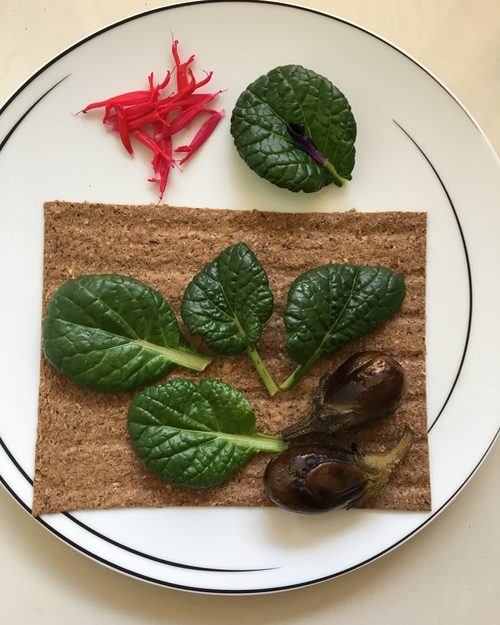 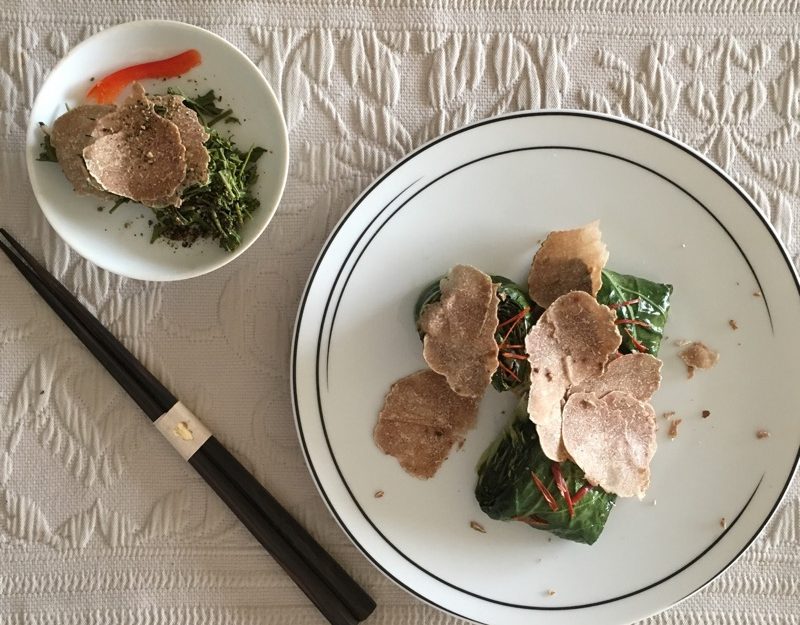 0
Planting as much of Monaco’s ground as possible, but also covering any unused rooftops may not be an intangible goal. Jessica and her expanding team at Terre de Monaco can take over larger gardens and spaces of private buildings, cultivate them either by renting the space or in exchange for a part of the produce, while the rest of the harvest will be sold under the brand Terre de Monaco locally. Having your rooftop planted with greens will “increase the lifetime of the roof by protecting and cooling it” when hot sun can alter the bare surface, it also insulates better and allows for a lower energy consumption. Let’s all have our roofs planted, not just in Monaco, but in any city or town, where securing local food supply can save lives at some point in the volatile future!
Visits only at Villa Girasole for the Foundation Prince Albert II, 16 blvd. Suisse, Monaco.
Possibility to purchase produce from the garden behind the Monte Carlo Bay Hotel (walk through the lobby into the inner gardens, on your right you will see the garden).
+ 377 97 98 10 19  or + 33 678 63 34 41
contact@terredemonaco.com 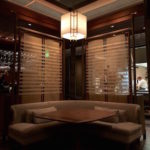 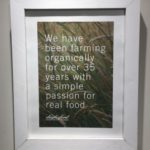 Daylesford: the model for local sourcing from own farm to table in London 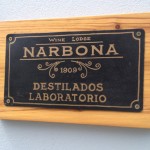 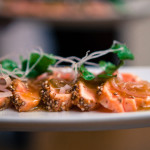