Let Virtue herself, by her own unaided allurements, summon you to a glory that is genuine and real. Your real self is not that corporeal, palpable shape, but the spirit inside.

Marcus Tullius Cicero was the most eloquent Roman orator, wealthy statesman, but also a sensitive humanist. On the Good life is a classical collection of his most influential philosophical discourses and writings. The wisely edited book and translated by Michael Grant, a classic scholar publishing in the Penguin Classics edition.

His wisdom is as relevant today as it was in the fragile time of failing Roman Empire because Cicero “was the first and greatest exponent of the process of popularisation”. He knew how to tap the emotions of his audience and any political speaker today can draw from his well of linguistic strategies. Cicero, cautiously in the chapter On the Orator alerts on the utmost respect to the law, since “the authoritative ruling of the statues themselves teaches us to check our passions, hold our lusts under control, and protect our own property while keeping our thoughts, eyes and hands off what belongs to our neighbour”. Further, “from [law and statutes] we learn to give preference to true merit above everything else – honours, rewards and distinctions are one by genuine, honest, and conscientious labour”. A wise man.

Using dialogue and stories to illustrate his points made On the Good life more approachable to wider audiences. Additionally setting them in the past “avoided possible offence to powerful contemporaries”, which Cicero needed to have on his side. On the Good life is based on the hypothetical Tusculan discussions that took place between eminent Roman citizens at a retreat house outside of Rome, at Tusculum. The exemplary modesty of the men involved in the talks, is the proof of their integrity, wisdom and maturity.

Descending from a non-aristocratic yet affluent family, his rare talent elevated Cicero into consulship. Ambitious, passionate, yet inefficient in his criticism and impact on the rotting empire autocratically governed by Caesar and Sula, he raised the Roman crowds and imprinted powerful ideas on the future Western democratic thinking. On duties he writes: “The men in charge of our national interests will do well to steer clear of the kind of liberality which involves robbing one man to give to another”. Also, overt taxation is criticised as h states: “they [law courts] must ensure that poor men are not swindled because they are poor, but they must equally guarantee that the rich men are not prevented, by envious prejudice, from keeping what is theirs or recovering what was once theirs but is now lost.” Such a deep sense for equality, and by not being an might helped to seal his popularity, because, as Cicero notes, people tend to hate anyone who is better than themselves.

Since most Romans disapproved of his passion for the Greek literature, that was his precious source of knowledge, but not his dogmatic echelon of rules, he was forced to defend his views to appease the local nationalistic sensibilities. Nevertheless, the practical guiding principles of the Greek-born philosophy to improve one’s life captivated the attention of the Roman upper classes. Cicero sees its pacifying potential on human conduct because philosophy is less emotional than religion, and its not radical, .but openness inviting nature less likely leads to physical conflicts and wars.

Enlightening our attitudes towards productive and potentially happy lifestyles, he writes: “Philosophy is a physician of souls, takes away the load of empty troubles, sets us free from desires, banishes fears.” 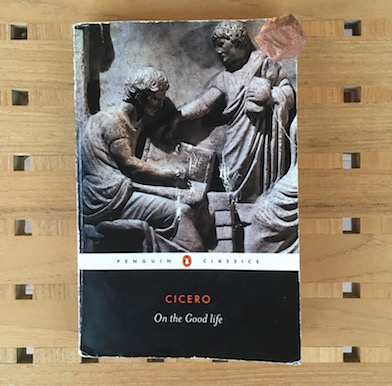 Grant as the commentator enters useful background information, points at misconceptions, directs the reader towards more correct sources when needed, and above all makes the book legible for the modern reader. Listing the wordsmith’s contributions to our vocabulary, Grant credits Cicero with creating these new terms: quality, individual, vacuum, moral, property, induction, element, definition, difference, notion, comprehension, infinity, appetite, instance, science, image, species, [and many other words] – all fundamental concepts that established Latin as the scientific language. These words he created while translating the Greek literature , and they are in use by most languages today. Still, take your time, as I did (reading this overflowing  throve of wisdom by snippets; the rugged cover is the proof) when reading the dense, inspiring oeuvre.

On the Good life captures Cicero’s open mind, his scepticism and belief in individual possessing a somewhat “divine power“. On Duties highlights the obligations of any citizen to seek justice and respect the law. Cicero being a barrister himself is fond of the law and the courts.

For me the most illuminating chapter was Laelius: On Friendship. Dedicated to Cicero’s son, in Laelius’s words he portrays friendship as a powerful tool for any wise man. “The greatest of all possible incentives to friendship is congeniality of temperament”, since despite our character changes the “friends we select ought to be sound, stable and reliable”.

“Human nature is too weak to refrain from coveting power”, yet “goodness is the strongest resource a man can command”, therefore we should seek friends based on their honesty, good morals, merit and general goodness as opposed to developing only advantageous friendships. It “works the other way around” and the “mutual sympathy” is the most rewarding attribute of the relationship.

Closing with the Dream of Scipio, Cicero writes “let Virtue herself, by her own unaided allurements, summon you to a glory that is genuine and real… Your real self is not that corporeal, palpable shape, but the spirit inside. Understand that you are god.” and then you should try to lead naturally a good life yourself with the respect towards the others.