“Cook with what you find around you.” writes Jeremy Fox, the author of ON VEGETABLES. This southern California celebrating vegetarian cookbook is intended to inspire anyone, anywhere, not just the lucky few residing in California. The fame-not-seeking celebrity chef embraced Los Angeles and its farmers warmly after mostly cooking on the US East Coast. Growing up in Ohio, then in Pennsylvania, working in Atlanta, Aspen, at the famed Manresa in San Francisco and then making the first Michelin starred vegetarian restaurant in America – the Ubuntu in Napa – one of the most talked about places to eat at. These experiences framed Jeremy Fox’s cooking repertoire. Now, his latest and reportedly the most satisfying restaurant – Rustic Canyon in Santa Monica – is full of honest and creative eclectic local cuisine loving LA foodies. 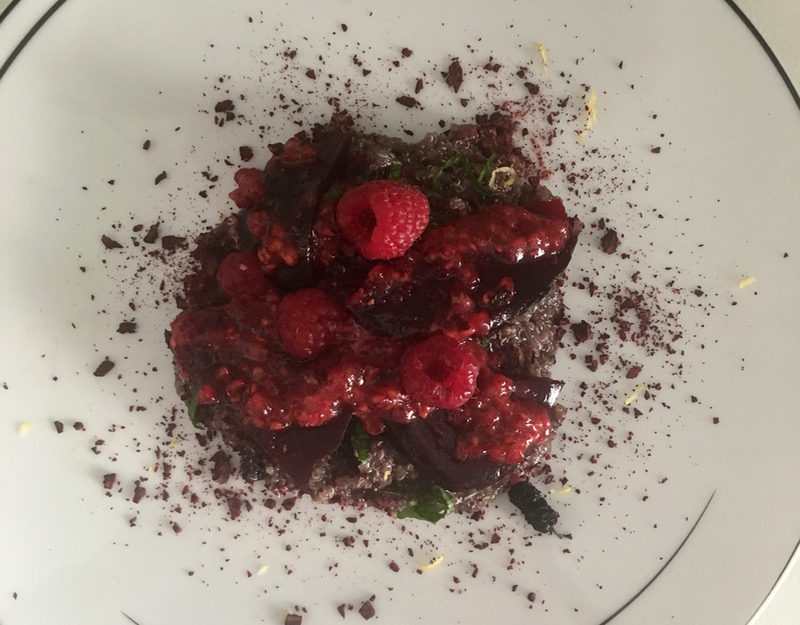 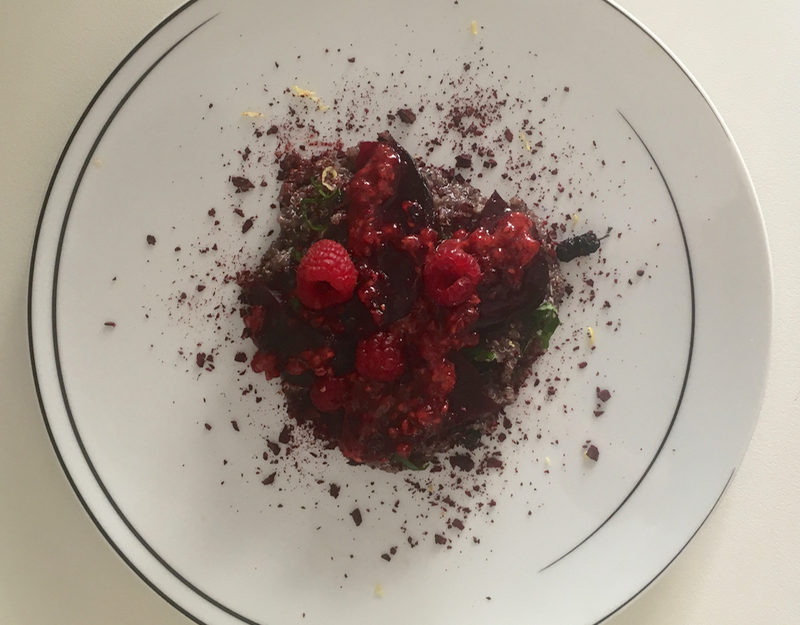 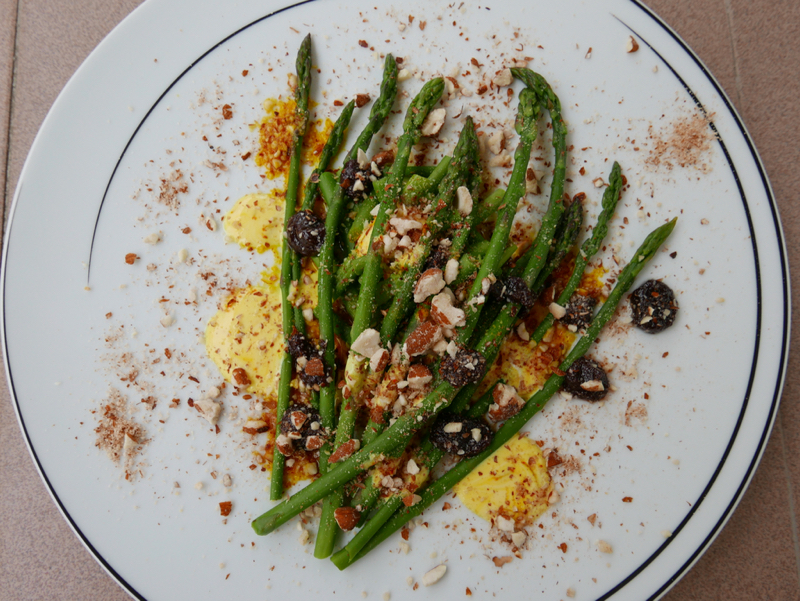 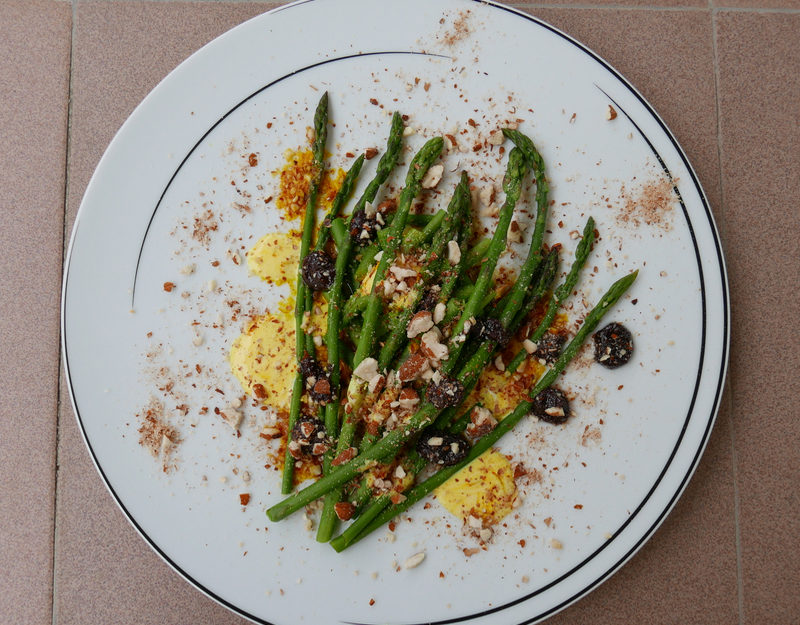 Jeremy Fox is not a vegetarian and cooks with meat and seafood at Rustic Canyon, where I have kept returning over the past years (he has headed its kitchen since 2013, and as it often goes with my favourite locales, treasuring their intimacy, I don’t review them until years later). The chef’s affinity to seasonal vegetables showing them to us, savvy diners, at their best, had developed when he head-cheffed Ubuntu. Yet his curiosity about nature’s produce was so nuanced that a farmer in Atlanta named one of his own bred tomatoes “Foxheart”. Some simple recipes like the tomato raw bar pop in the book, but make no mistake here, since these are just a breather after you spent days and hours curing egg yolks, marinating daikon, pickling and meticulously de-shelling or peeling veggies for other recipes. Jeremy Fox’s passion for the Mediterranean but also Belgian cuisine shows throughout ON VEGETABLES, yet it is a blend of cultures what the California cuisine is about! Over a decade visiting the sunny state taught me that it is the Italian sunshine, Mexican attachment to nature and Asian exoticism that arrived with its immigrants. 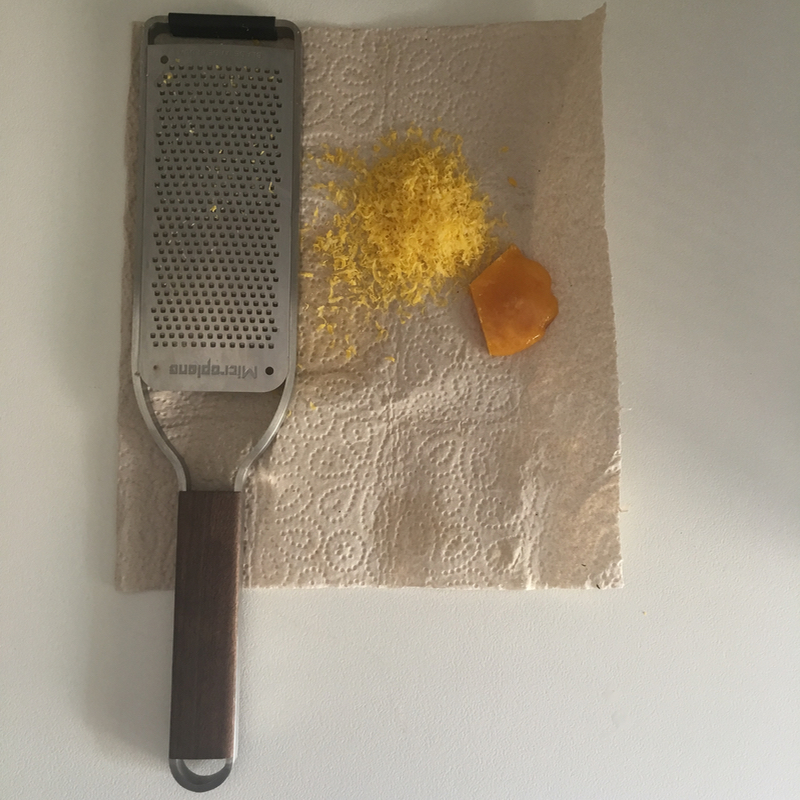 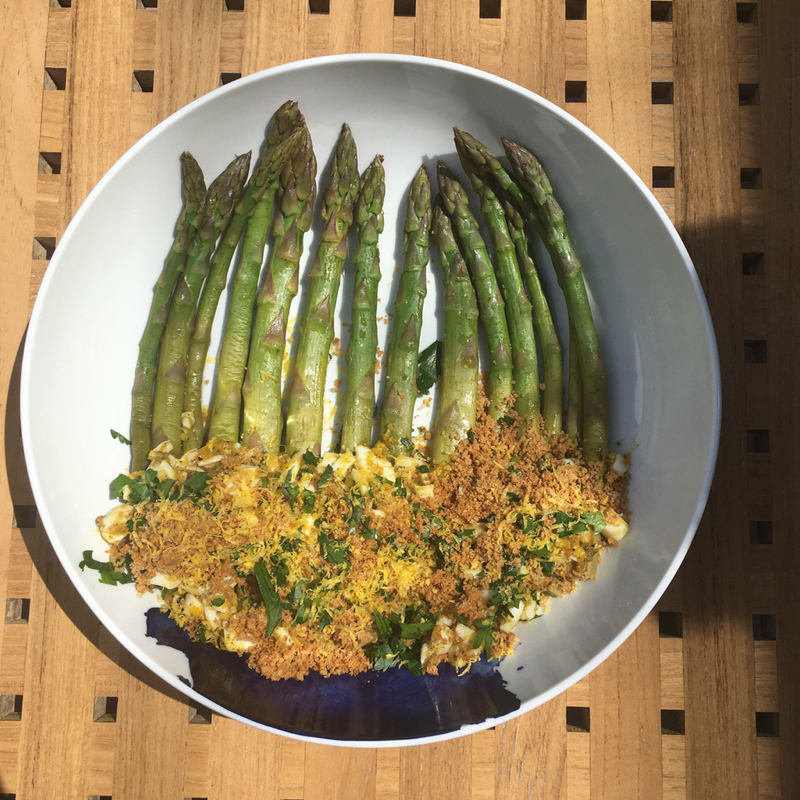 Some of the recipes  such as the superb savoury peas, white chocolate & macadamia are the originals he created at the legendary Ubuntu, while others like the brassicas a la catalan were hatched and inspired by the abundant California farmers produce. The deserts are different than the usual pastry. Not having much background on the pastry side of the restaurant business allowed for Jeremy Fox’s creative blend struck between the savoury and sweet in many recipes. Like in the cool melon and coconut milk curry (perfect for summer, chilled soup that is mildly, jalapeño spicy), strawberry Pavlova, beets & berries, cherry soup, and other. 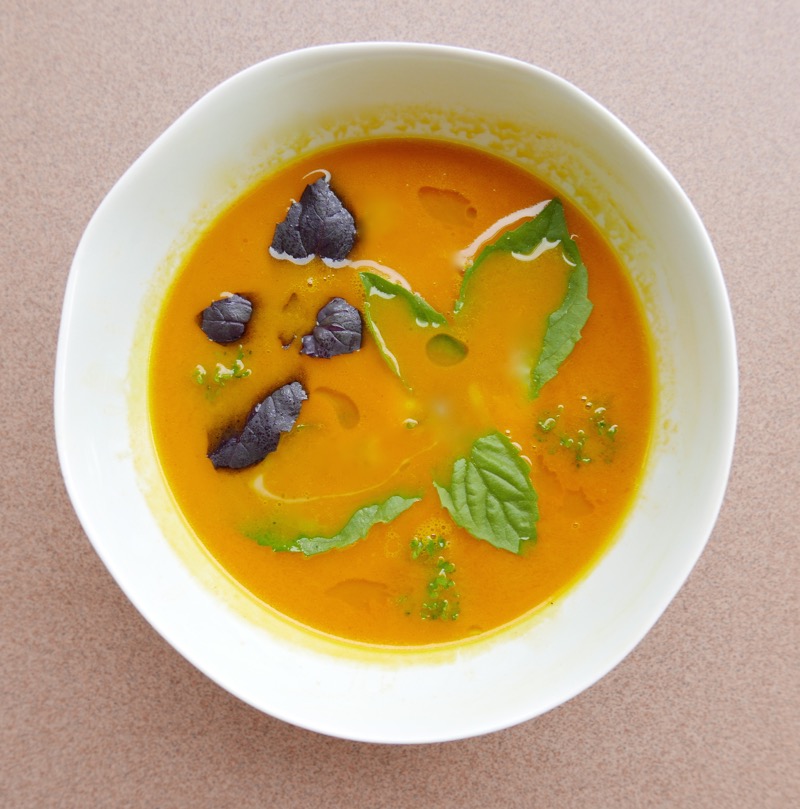 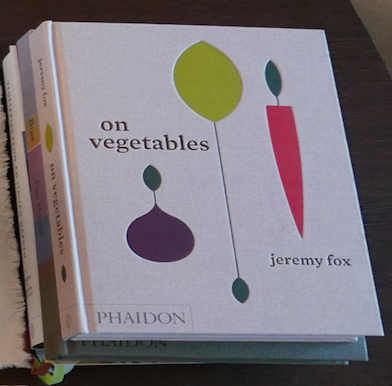 Included are some baking recipes – such as fresh brioche (Danie’s), focaccia (Jun’s), pain de mie and other breads supporting his creative veggie-based toast toppings, as well as for his decadent cheese sandwich that fires off the cookbook. 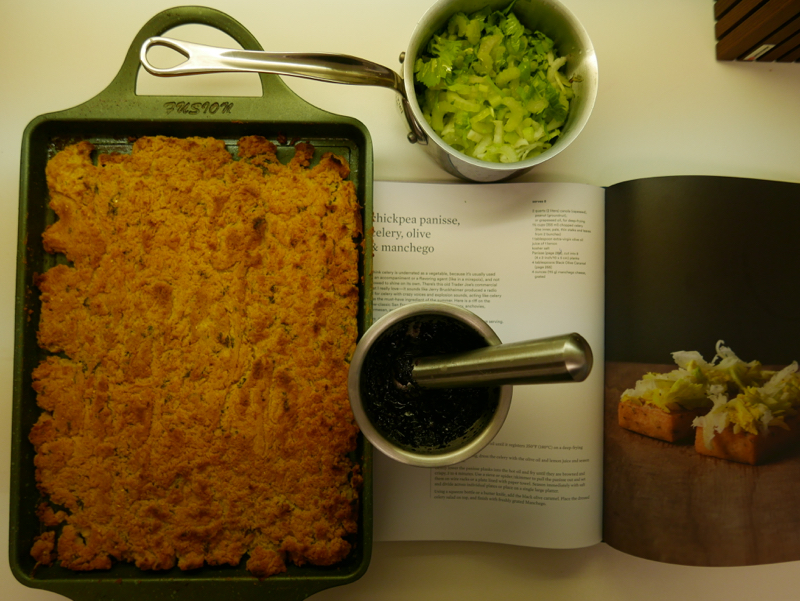 Jeremy Fox is one of the most astute California-based chefs.  On Vegetables is much more than a vegetarian cookbook, and I cannot more agree with the chef writing that “discarding edible food is incredibly wasteful“. This book is a testimony of delicious waste-reducing cooking “even the smallest scrap can be used as components of a larger dish.” As with nose-to-tail meat cooking “using everything should be the standard“. On Vegetables gets practical about using as many parts of the vegetable as possible. No judgements here, since fava bean shells or pea pods could taste incredibly satisfying. A pea shell stock can form the base for a risotto in place of the usual vegetable stock, and can connect the meal you just had yesterday. Fox writes: “each meal [should] have a narrative“. The personal introductions to each recipe supplies the story, as well as warns against possible mishaps or necessity to prepare some parts well ahead. The only practical information I am missing though is an approximate preparation time. This would make any cook’s life much easier, and allow for better planning. 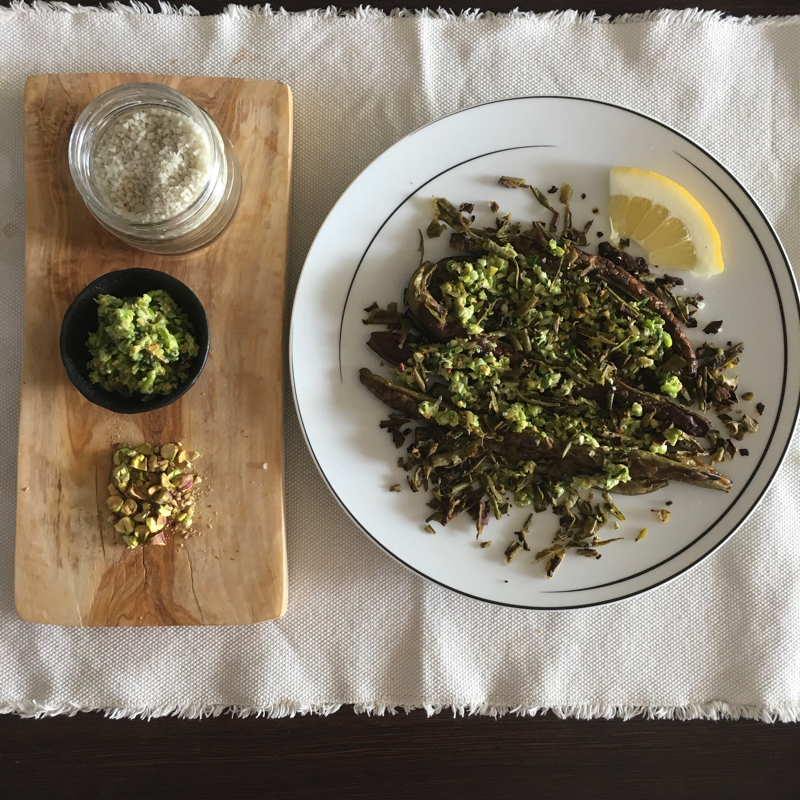 Mediterranean meets the Pacific California in many of the recipes. Liguria shouts in borage & ricotta dumplings in mushroom broth. Supporting the veggies are some of his favourite ingredients such as berries, olive oil, garlic, bread crumbs, parmesan, salt (BEWARE: lots of salt as is popular in America).
If you ever shop or just visit the Santa Monica Farmers market in California, you must get this book. Although he uses occasionally unusual equipment such as a pizza stone for baking the recipes are pared down at the Rustic Canyon as well as in this book On Vegetables. Some ingredients that are hard to find can be left out (such as fennel pollen) without harming the recipe. Fox allows for the ingredients to shine through the inspiring plating. Vegetables became my respected friends.
Alphabetically, by the main featuring vegetable, the recipes are otherwise mixed, savoury, sweet, dips or roasts, not sequestered by season as the availability of vegetables differs globally and southern California itself blends seasons into a constant stream of colourful produce. These are my favourite tried recipes:
Beets & berries – dehydrating beets takes about a day, but you can buy them and just grind in a coffee grinder
Brassicas a la catalan – sublime addition of pine nut pudding and smoked pepper tears (=what drips off grilling peppers)
Chickpea panisse, celery, olive and manchego – I baked it instead of frying and it turned crispy and healthier
Chilled asparagus, saffron, olive & fennel pollen – use spring peak season asparagus
Daikon piccata, lemon butter & nasturtium capers – daikon indeed makes for a tasty breaded meat substitute
Panne frattau: fennel, strawberry sofrito, egg, carta da musica (Sardinian thin flatbread tricky to make thin without baking stone as the chef advises, but  can be baked a bit thicker in the oven)
Peas, white chocolate & macadamia – patience required to double-shuck the peas; there is also a sweet version of this recipe in the book, but I am yet to get myself motivated to work out the tiny peas!
Poached asparagus a la flamande (as in above, plus choose the best farmers eggs you can find (I get mine organic Galline Fellici at the market in Dolceaqua, Italy), the yolks must taste generous to show this recipe at its best
Smoked split pea shell and carrot soup – since I cannot use wood grill on my terrace, I substituted smoky chipotles
Whole roasted young favas with their pesto & pistachio – a true seed-to-stalk cooking as no part gets wasted in this dish, a nitty gritty work to double shell the favas, but easier than with peas 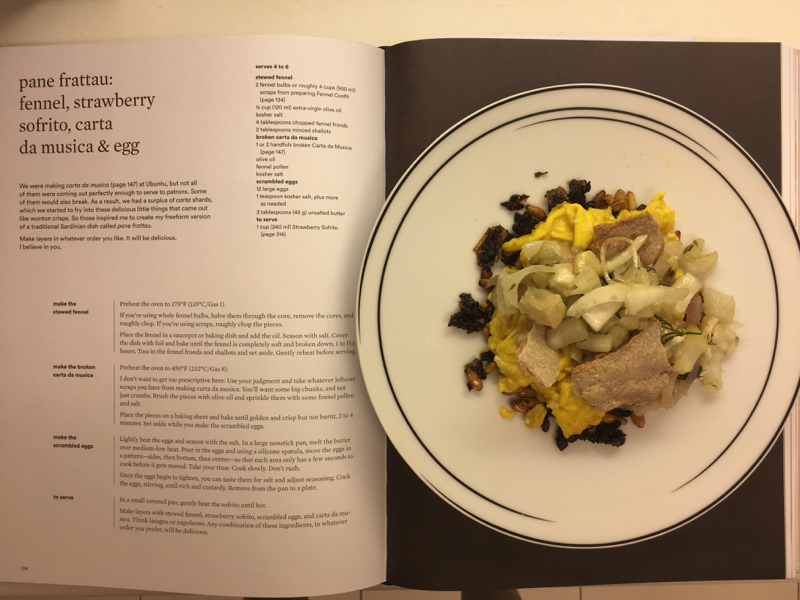 Jeremy Fox is one of the best chefs America has produced, yet the celebrity sucked him down before rising again. In the book he gets personal including “things i like” assisting the home cook, and next to the fabulous recipes his story as maturing chef meeting “adulthood, accolades and anxiety“. He writes: “I wanted to create sustainable success. My personal happiness was directly tied to my professional happiness and also, it turns out my creativity.” From my personal cooking experiences I cannot more agree with him: “Food from a happy kitchen tastes better than food from an unhappy one. Peace tastes better than anxiety.” 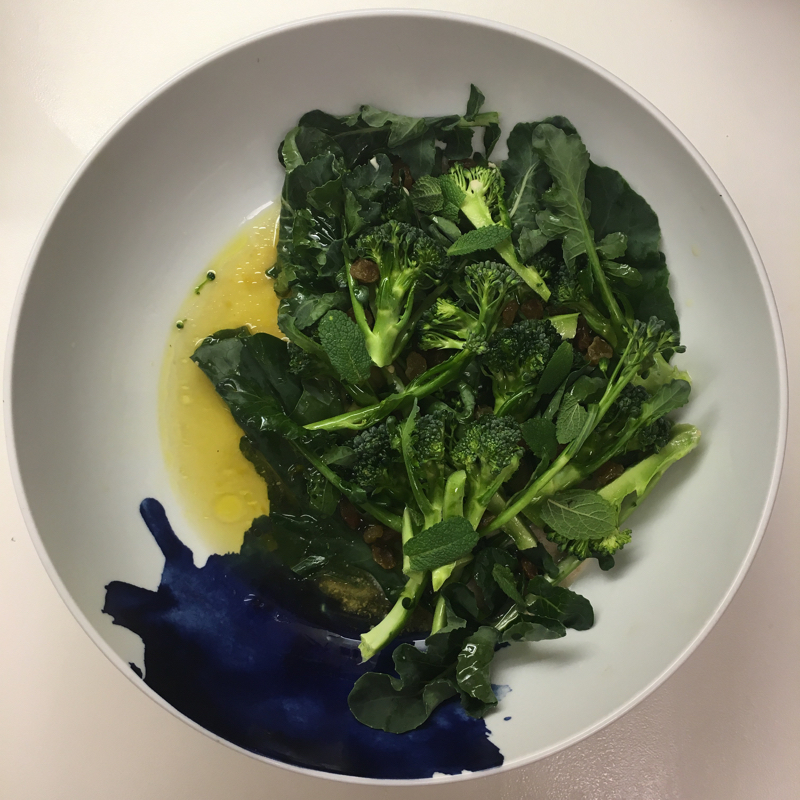 Honouring his favourite farmers by sharing their personal stories rounds the holistic intention – from the farmer to using the “whole plant“, and not wasting anything. Honesty penetrates the oeuvre. Confessing that “when I was cooking at Ubuntu I was driven by anxiety and depression, …the food, precise and exact, was the polar opposite of my mental state. It was unhealthy and unsustainable.” As the chef evolved and escaped the delirium of prescription drugs that fuelled his fame, his new chapter in Los Angeles lie this book “comes from a place of stability and clarity; it is the best food I’ve ever made“. Dive in, get your kitchen dirty, the farmers excited and your loved ones ravishing over thier plates like little piglets in the dirt. It is nature rather than nurture that laid the founding blocks for Jeremy Fox, the chef. Added to his diagnosed ADD, inability to study, 100hours working weeks as a line cook, anxiety was nourished. “Maybe California is the solution to all my problems!” At Manresa, one of the country’s best restaurants, cured him of some of his bad old habits. “I learned about substance instead of swagger“, writes Fox. 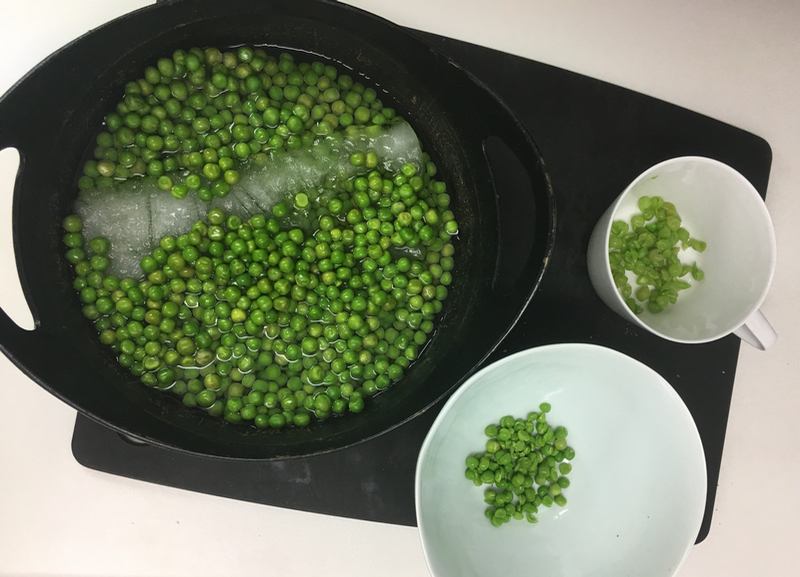 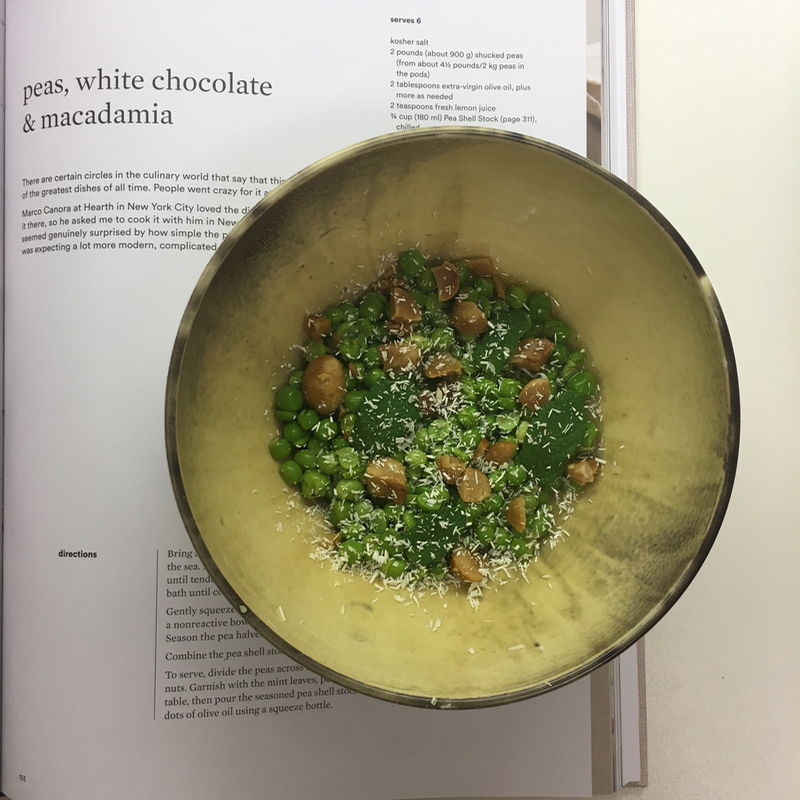 You will stock your larder with delightful edibles (the black olive caramel is insane!, while cured egg yolk will save you money for bottarga, and pepper tears will make you cry with delight), widen your culinary horizons and improve your understanding of using leftover fronds, pods, shells, tips, … On Vegetables is also a deeply personal biography through food, a plain delight for the eye as the honest and raw photos by Rick Poon convey. From about the third of the total recipes that I have cooked, every single one tuned out to be superb! A remarkable achievement. I felt the love the chef was sharing with the reader of “on vegetables”.
Despite his penchant for dairy (most of which he instructs on how to make from the basic milk or butter) – cream, great cheese (particularly Italian ricotta, burrata, pecorino, …) and butter, some recipes will suit vegans (vegan 4x polenta, charred whole broccoli with miso bagna cauda, cool melon curry with coconut milk, …). I would more recommend On Vegetables to any carnivore, who loves wholesome, rich and tasty dishes, but needs to balance his/her consumption with more plants. On Vegetables by Jeremy Fox will stir your curiosity. Still, I have to make that sunchoke (jerusalem artichoke p.204) milk!