Strolling in the late autumn breeze between these patched buildings over the Gulf, the light glistened a natural art show around me.

The Middle Eastern art scene will never be the same. One of the best living architects in the world, Jean Nouvel, created yet another masterpiece with the Louvre Abu Dhabi. Through its elegant harmony, the contemporary mirage in the desert may well excel any other buildings the Frenchman has designed to date. While most of Nouvel’s buildings literally punch the eye — consider the phallic Barcelona’s Torre Agbar, his coloured asymmetry boxes of Musée du quai Branly and the shimmering snake skin of the Philharmonie de Paris or the motorised heliostat bridging over the One Central Park tower in Sydney — rather off than in sync with their environments, this museum was more astutely fitted into its surroundings and culture. The Louvre Abu Dhabi may well become the pylon gauging in tourism from the east and the west. The Chinese buses have already parked in, but it did not feel crowded at all, not yet. Having the space to enjoy the art is a luxury at its godmother’s Parisian institution. 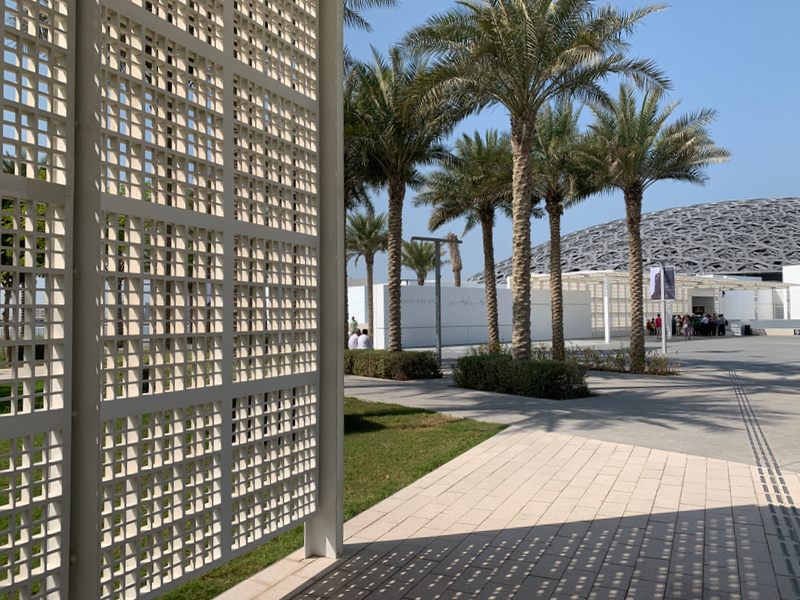 For your comfort and to recharge at The Louvre Abu Dhabi, a small garden cafe brews locally flavoured coffee specialties such as saffron, pistachio and rose latte with the barristers artfully adorning each cup. Inside, a large, busy cafeteria with a rooftop terrace rarely attractive in the ultra hot Emirate, but the view is worth climbing up. 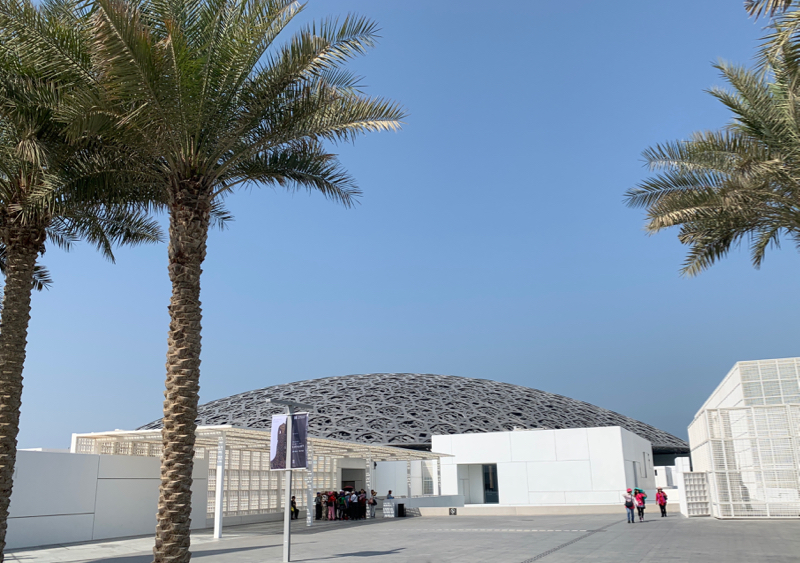 A partnership with The Louvre in Paris is an unmatched leap in the global art world. Renting priceless inventory from other museums is always complicated, thus betrothed to the French Queen of all the museums was a winning stroke of genius. Having an easier access to the world’s finest museum’s treasures, positions The Louvre Abu Dhabi as the world leader in cultural tourism.

Most of the Arabian Peninsula, awash with oil money to spend on precious pieces, can also effortlessly commission the world’s greatest architects to design structural wonders in their desert landscapes. No other Emirate is richer than Abu Dhabi. There, the oil wealth has not been as ostentatiously spent on entertainment as Dubai has lavished. Instead, the savvy leader of Abu Dhabi has patiently knitted the finer, yet longer lasting strings of fancy. The Louvre Abu Dhabi offers an art and education outlet to boost the intellectual potential of the UAE capital. 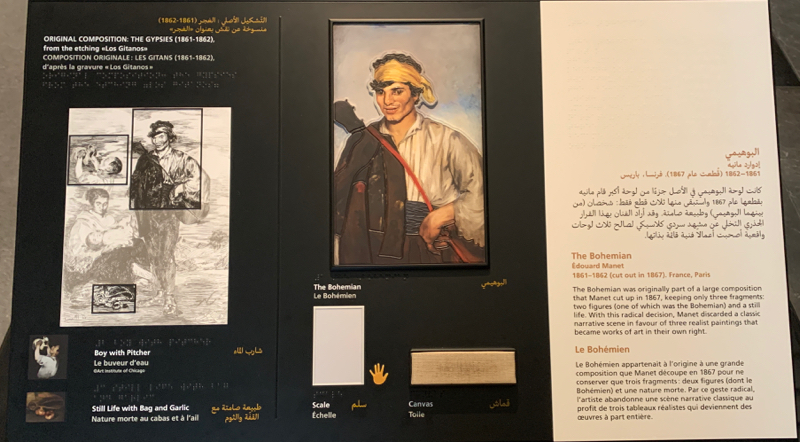 I have not been to the island state of Abu Dhabi for over a decade. Nothing has attracted me back to this suffocating concrete metropolis with palm trees being the only plants thriving without ceaseless irrigation. Yet, reading about the stunning desert mirage, I had to stop over on my way to Asia. The location on the Saadiyad Island where NYU has a branch is practical as you can drive directly from Dubai without passing through the business district. If you are stopping over in Dubai or locally-based, venture in.

An interesting glimpse behind the curtained scenes of an artist’s work, The Bohemian of Eduard Manet was presented solo as usually, but an information board nearby revealed that it was originally part of a larger work by the French painter titled Gypsies. 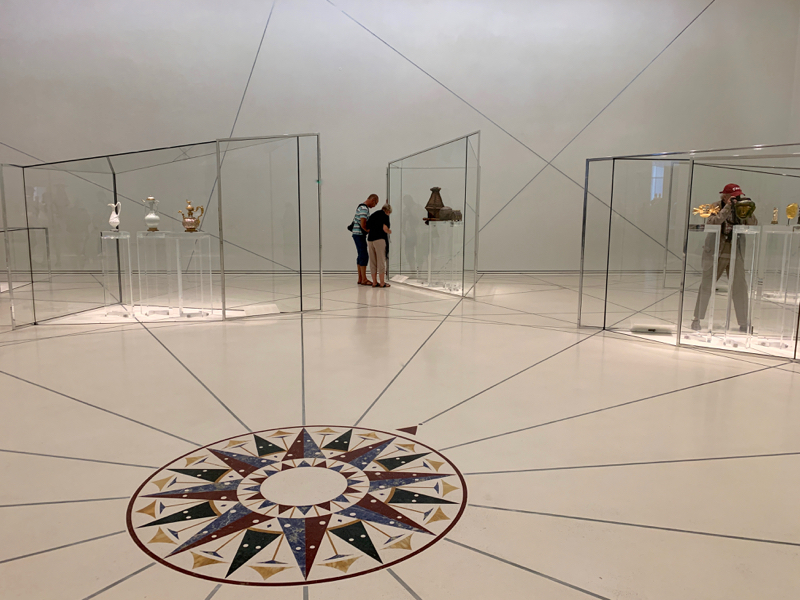 Still, in an agreement with some better studied art critics, I think that the inaugural exhibition themed around the intersections of global history itself is not worth flying over. It does not stir or inspire. Entering our documented history, the highlights included the Monumental statue with two heads from 6500 BC found in today’s Jordan and other objects from the first cultural hotspot of men purchased or lent to the Louvre Abu Dhabi. The special exhibition on Luxury did not convey anything meaningful or revealing. Just fancy objects assembled together under one roof. 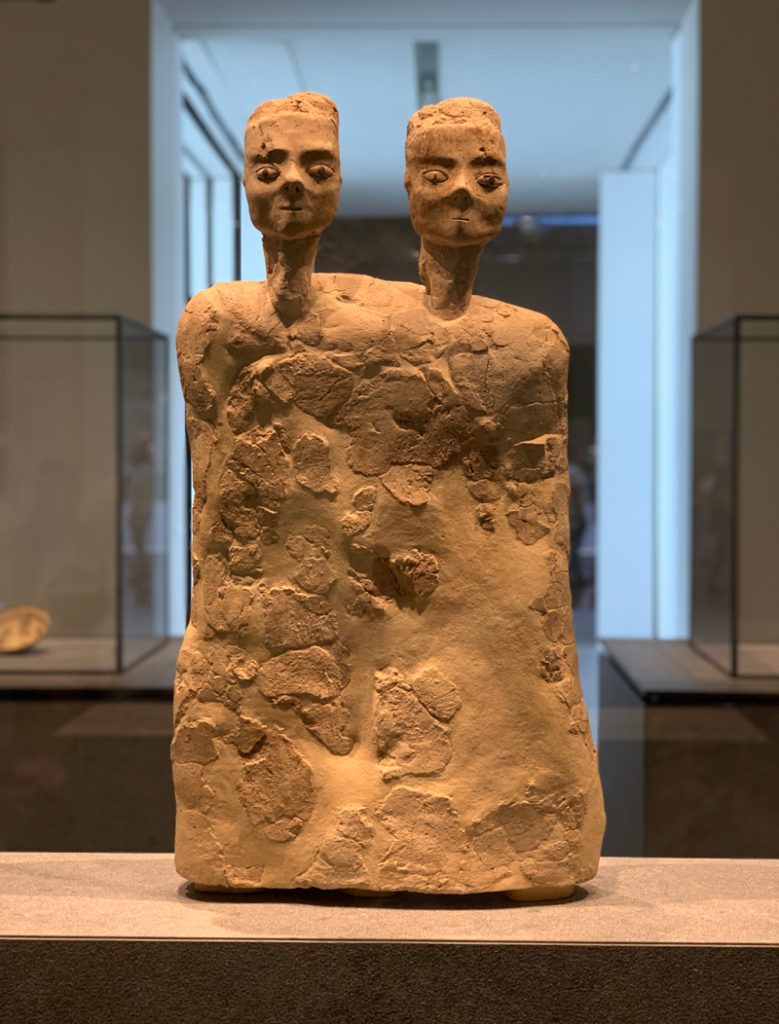 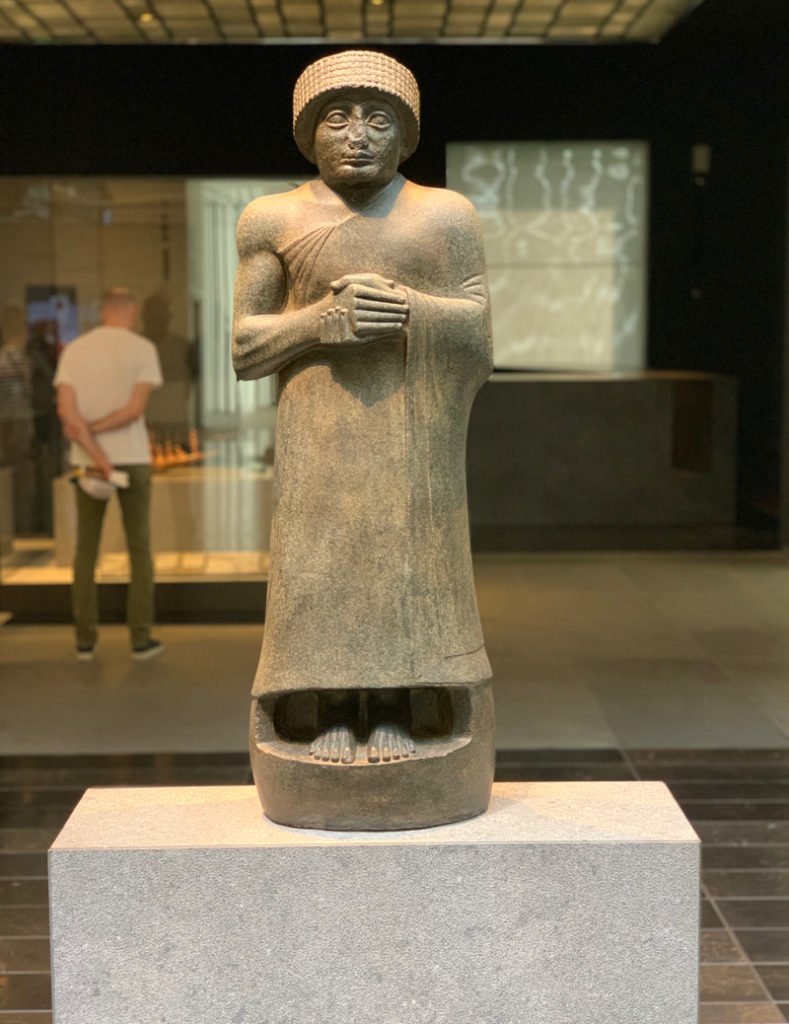 The placing of a stone wall chiseled with hieroglyphs and the headless Rodin sculpture in the breezy outdoor atrium puzzled me most. As if our head was lost in letters and not connected with our body. When intellect governs life, we often forget the body’s needs. Our ignorance of the spirit and intuition cuts us off these precious resources. This is, however, my personal interpretation of this installation’s coupling, assisted by the architecture itself.

Strolling in the late autumn breeze between these patched buildings over the Gulf, the light glistened a natural art show around me. Since Nouvel considers his cultural buildings as living neighbourhoods and wanted to preserve the outdoor feel, he had to shield the visitors from the high temperatures with a vast steel umbrella. The dome’s eight layers of Islamic patterns were savvily combined so the penetrating natural light changes all day long. Reflecting art and light on multiple surfaces is the stroke of genius by the architect with The Louvre Abu Dhabi. Hiding from and letting light in architecture is not a unique to the Frenchman as others like Lee Ufan, the South Korean maestro, also plays with natural light in his minimalist constructs.

The natural elements meet in a further reverie here as the sea water enters into many spaces. Flushing in natural freshness is a welcome relief to the heavily air-conditioned interiors in the country. Plus, which museum can boast with a lifeguard on duty? Aimed at families, while spicing it up with some natural fun, this cultural and educational centre must make children safe.

My photo essay showcases the building and the inspiring interior. The later complemented with quotations in arabic and english printed on the glass windows connects the mind with the philosophers intellect. 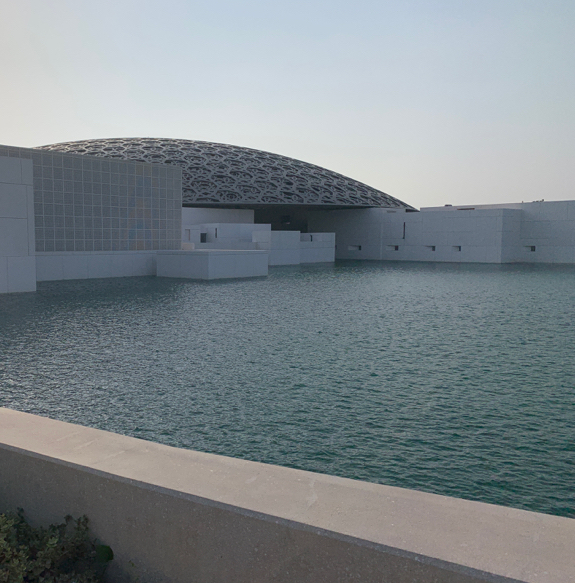 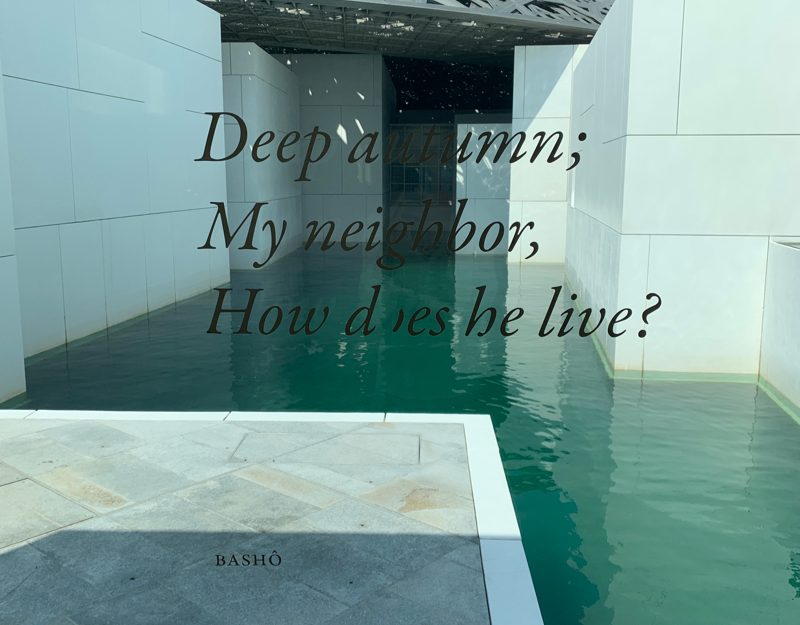 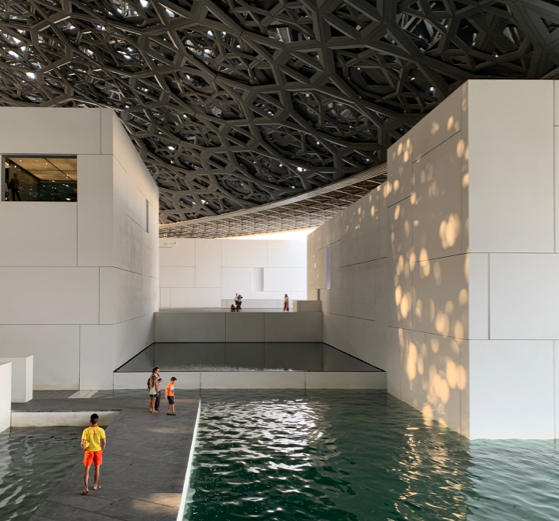 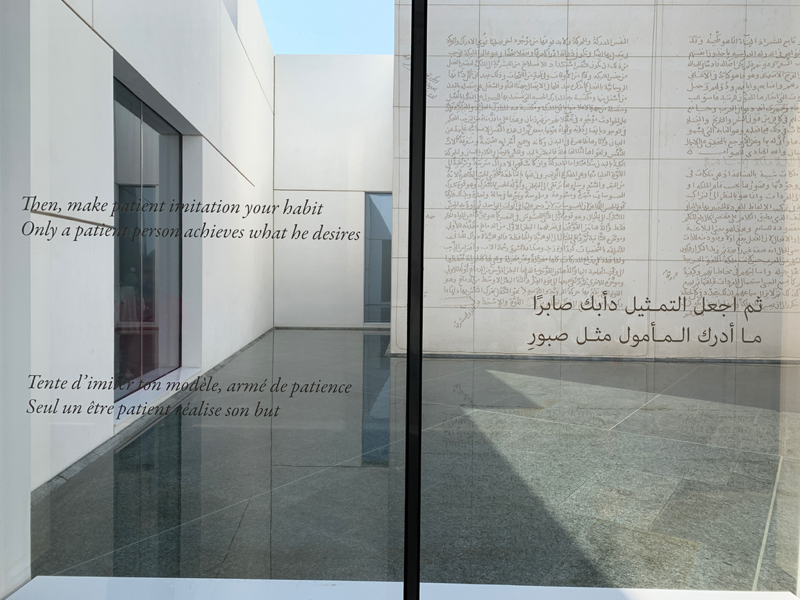 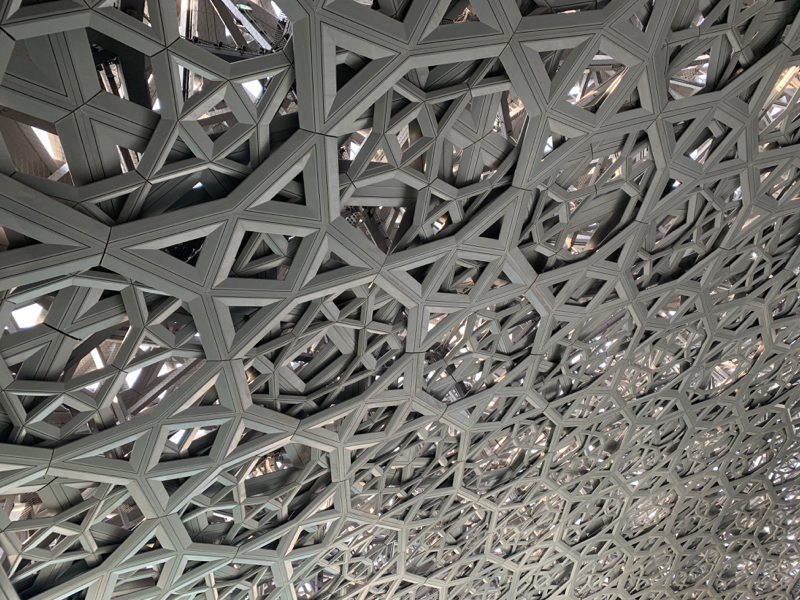 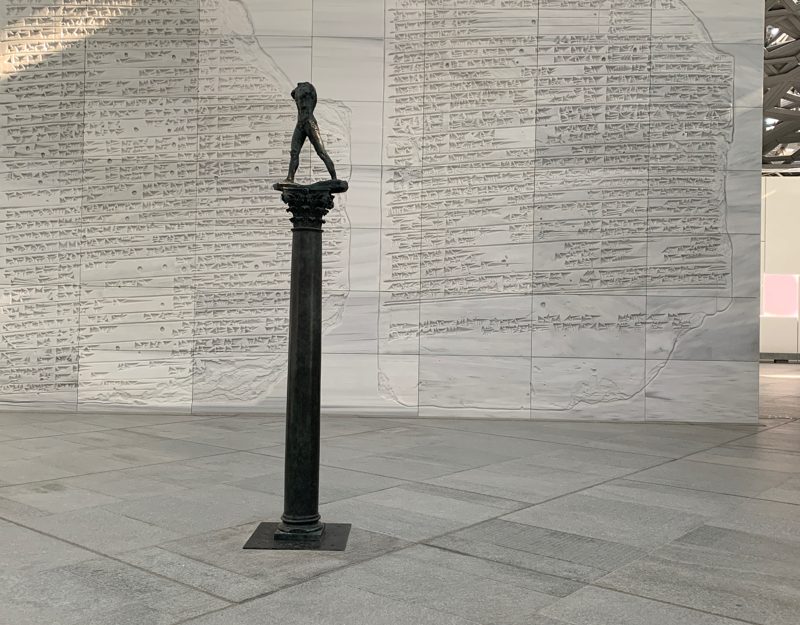 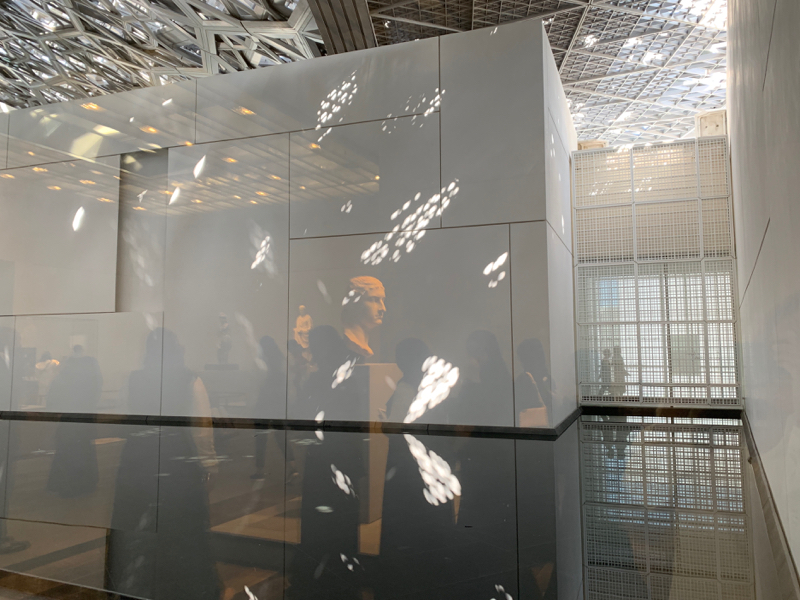 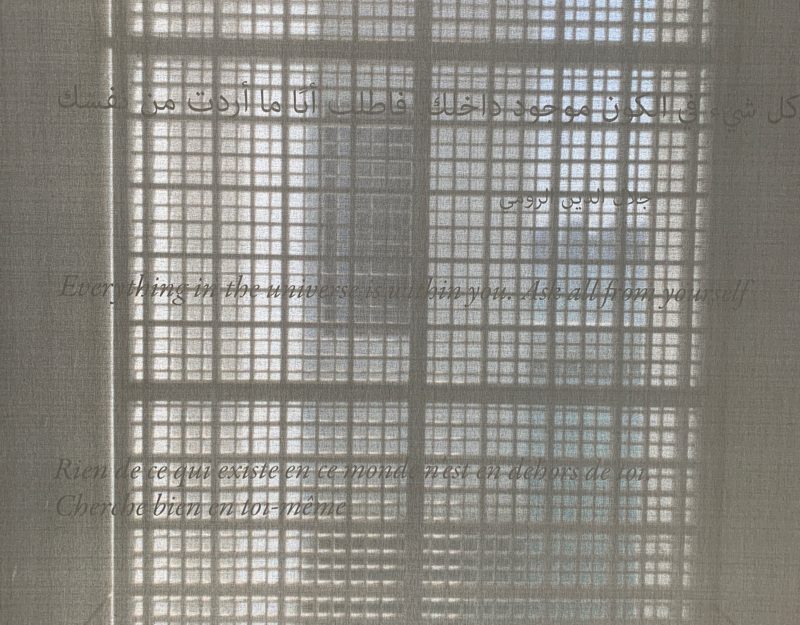 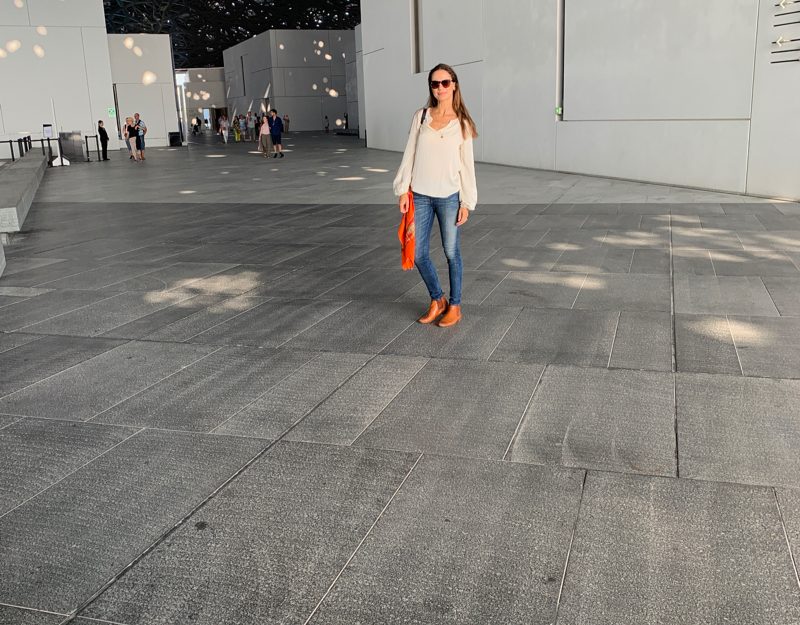 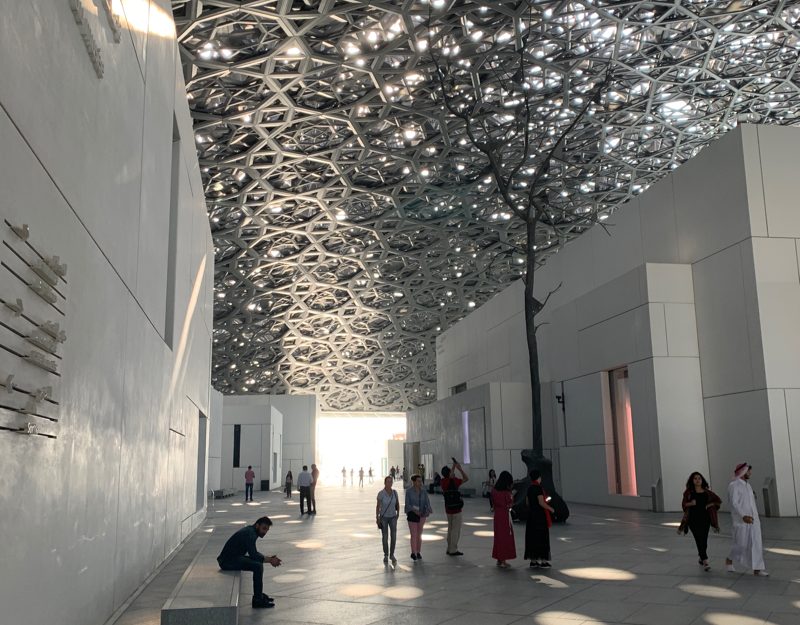 The architecture by Jean Nouvel is on its own a reason to fly over or stop by on your way to Africa, Asia, India or Europe. Like the ancient Silk Road, the Middle East once again benefits from its paths-crossing geolocation. While, the world is rich on Nouvel’s steel forms erected as tributes to boundless imagination and creativity, working ‘in countries, where he might not agree with social and political norms’ [he disclosed in a recent interview with the FT] “is very important to show that there are different cultural standards, that aren’t narrowed by religion or fundamentalism. Being there and creating buildings can help the mentality to evolve. Just because a culture is in the Middle Ages, it doesn’t mean you shouldn’t go there. I’m an optimist. If one can make things better, one must. I want things to change.”

Not far from where I live, in Eze, Nice and in Provence there is a magnificent winery at Château la Coste by Nouvel. Still, France is a small plate for the architect. The surfing-wave-browed Nouvel’s work has now redefined the iconic MoMA in New York and the millennial China attracts him. In the above quote from the Financial Times, he mused on his relationship with concert halls, museums, and other art institutions: “Contemporary art is always in advance of its times; architecture is always produced afterwards, in response to its times. Architecture is an art — that’s what people forget more and more. It has the potential to affect us, to move us — that’s the aim of all art. In fact — it’s really the mother of the arts, it can nurture the others.”

Inspired, I am eyeing another Nouvel’s art project in the Middle East, the National Museum of Qatar in Doha. Its space-like oddity seems rather suitable for the desert-scape.