“The winemaker should touch the wine the less as is possible. I believe, that the nature is expressed the most.”   Manuel Rodrigues

With a fortunate hands-on experience working on a vineyard in Chablis with his father, Manuel Rodrigues had the doors open to enter the wine world. He used the knowledge he gained and further expanded his theoretical grounds studying at the Hospitality School Bourges in the Loire Valley, France.
At his tender age (25) he has already won numerous awards – Young Apprentice and Young Sommelier.

He worked with such distinguished chefs as the three Michelin starred Spaniard Santi Santamaria and tasted through the luxury of the seven-star Dubai’s Burj Al Arab hotel as a sommelier there in 2006.
He isn’t spoiled though by such a remarkable background. With his upbeat personality, he openly shares with me his insights about wine and unveils his plans for the revival of the wine cellar at the luxurious hotel St. Regis in Singapore, where he was recently appointed the Grand Sommelier.
His choice of three wines for today’s tasting at the Decanter, a breathtaking wine tasting room at the St. Regis, discloses that despite his French education, he is not fixed only on the Bordeaux and Burgundy as most top restaurants and hotels often do. 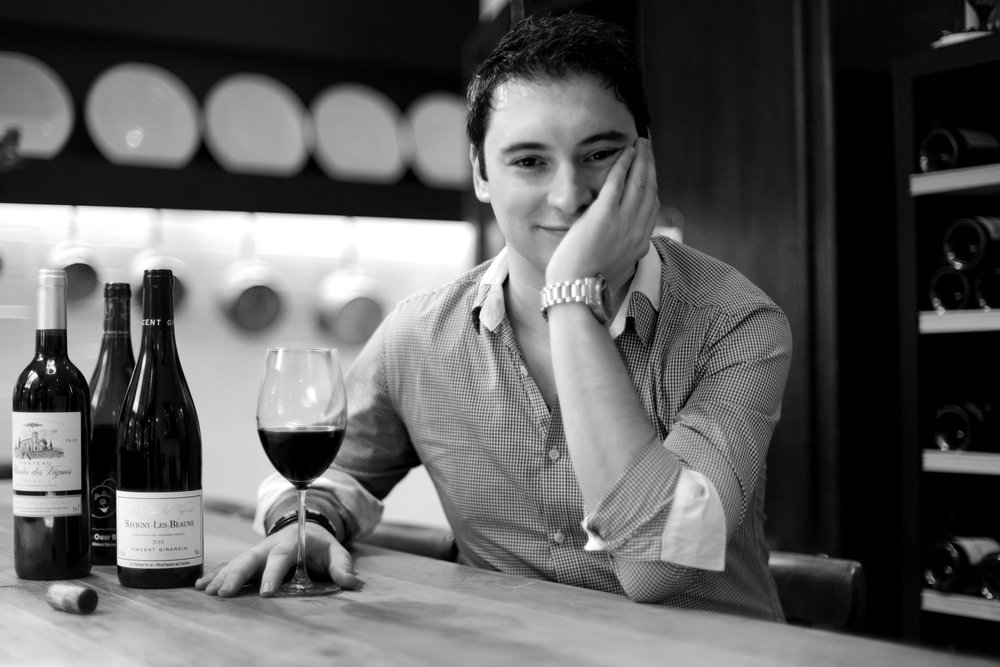 As we taste the white crisp Alsace Riesling from Trimbach 2002 (one of my favourite producers) he says: “I like Trimbach as he uses traditional methods in wine making. Great wine for me opens with time in the glass.” His honest approach is humble, “the wine maker cannot lie as the nature of the wine should be expressed.” That the tradition is slowly dying out saddens him particularly in the case of France. “It is a pity that Petit Verdot is used less and less in Bordeaux, it adds acidity and extends the ageing potential of the wine.”

This respect for tradition seems to be correlated with his homage to nature. “The winemaker should touch the wine the less as is possible. I believe, that the nature is expressed the most.” As we taste his next choice of the red Chilean, intense and red fruit based Purple Angel by Montes 2007 he confesses: “This wine from the New World is great, there is nothing wrong with it, but you are not going to think where it comes from, how it was made or who is the producer.”
The young, but experienced sommelier adds: “When you taste the wine and talk after with the winemaker then you will think much more about how the wine is related to his personality.” The wine seems to reflect its “father”, the producer.
When I ask him what is the most fascinating wine region in the world for him, I get a straightforward response. “I was lucky to be born there – Burgundy. It is so much about the terroir and I admire that.”

But, he remains open to exploring other wines. The Merlot-based, jammy and well balanced Les Bataux, Les Vins de Salins 2006 from Languedoc-Rousillon in the South of France pleases my palate. I dare to say that it will be appreciated by the sweetness seeking Asian palate as it is not at all punchy but boasts with chewy, red fruit tones. Languedoc is becoming more popular beyond Europe. Owning to such sommeliers as Manuel Rodrigues now also in the far-east Asia.

After he transformed the entire character of the wine cellar at St. Regis in Singapore by “balancing the wine list with adding more little known but excellent wines from Spain and Portugal”, Japan called. Well, more it was his heart, as he fell in love with a delightful, energetic and well-traveled Japanese lady, moved to Tokyo, worked at the Hyatt in Roppongi, got married and recently they had a child. I met them in Tokyo a number of times impressed by their mutual business ideas. Opening a wine-focused hotel in Portugal, Manuel’s family original home country, is currently in their cards. Perhaps, after over a decade heading further and further east, their lifestyle plan will bring him back to Europe with his new family.