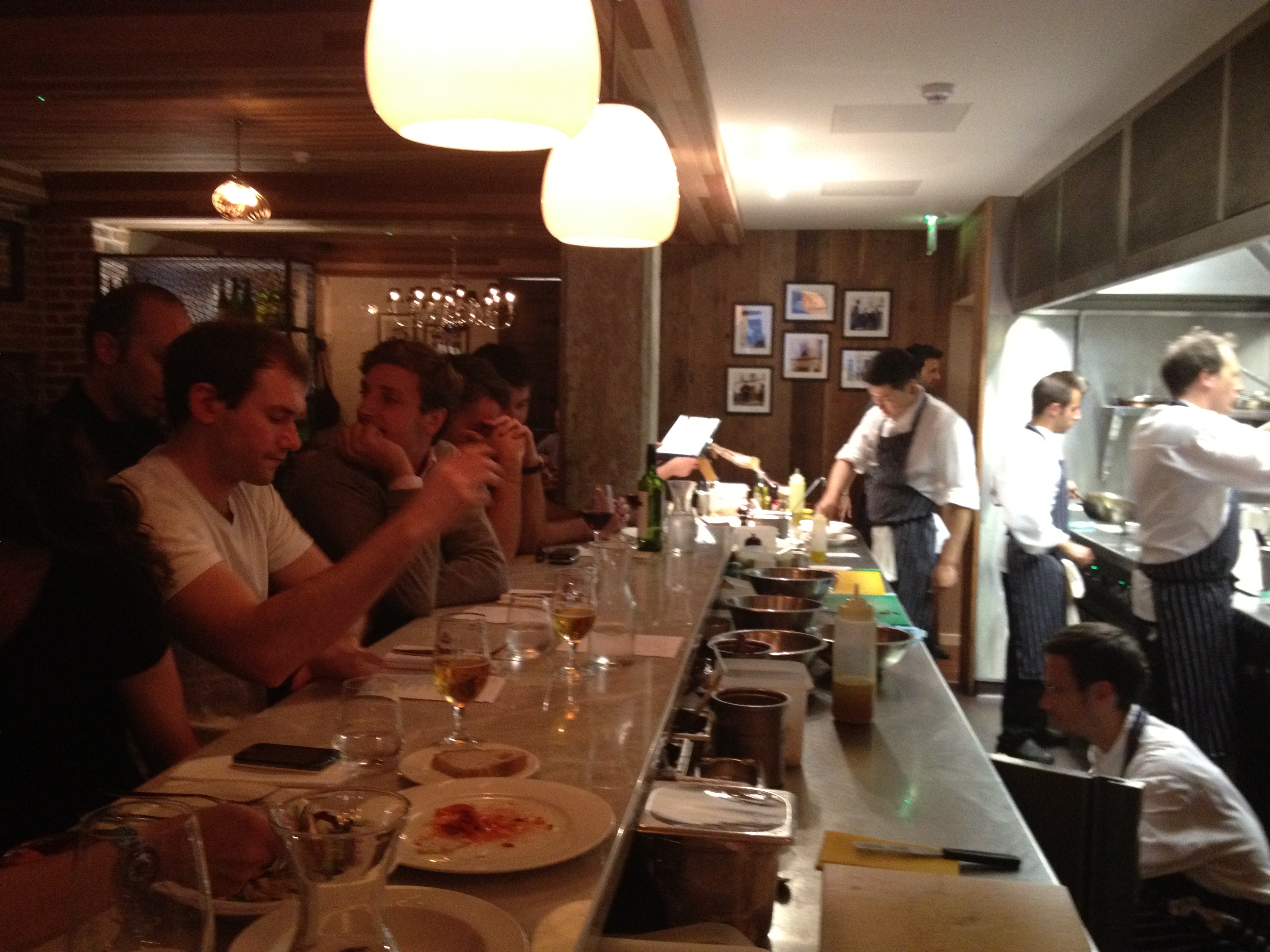 Chef: There is one famous Pizarro – the Spanish conquistador Francisco Pizarro González, who conquered the Inca empire in South America and was assassinated in Lima in the 16th century, yet, today there is another Spaniard gaining fame as he is conquering the London’s restaurant scene. First cooking at the tapas bar Brindisa and now he opened his two new places at once! 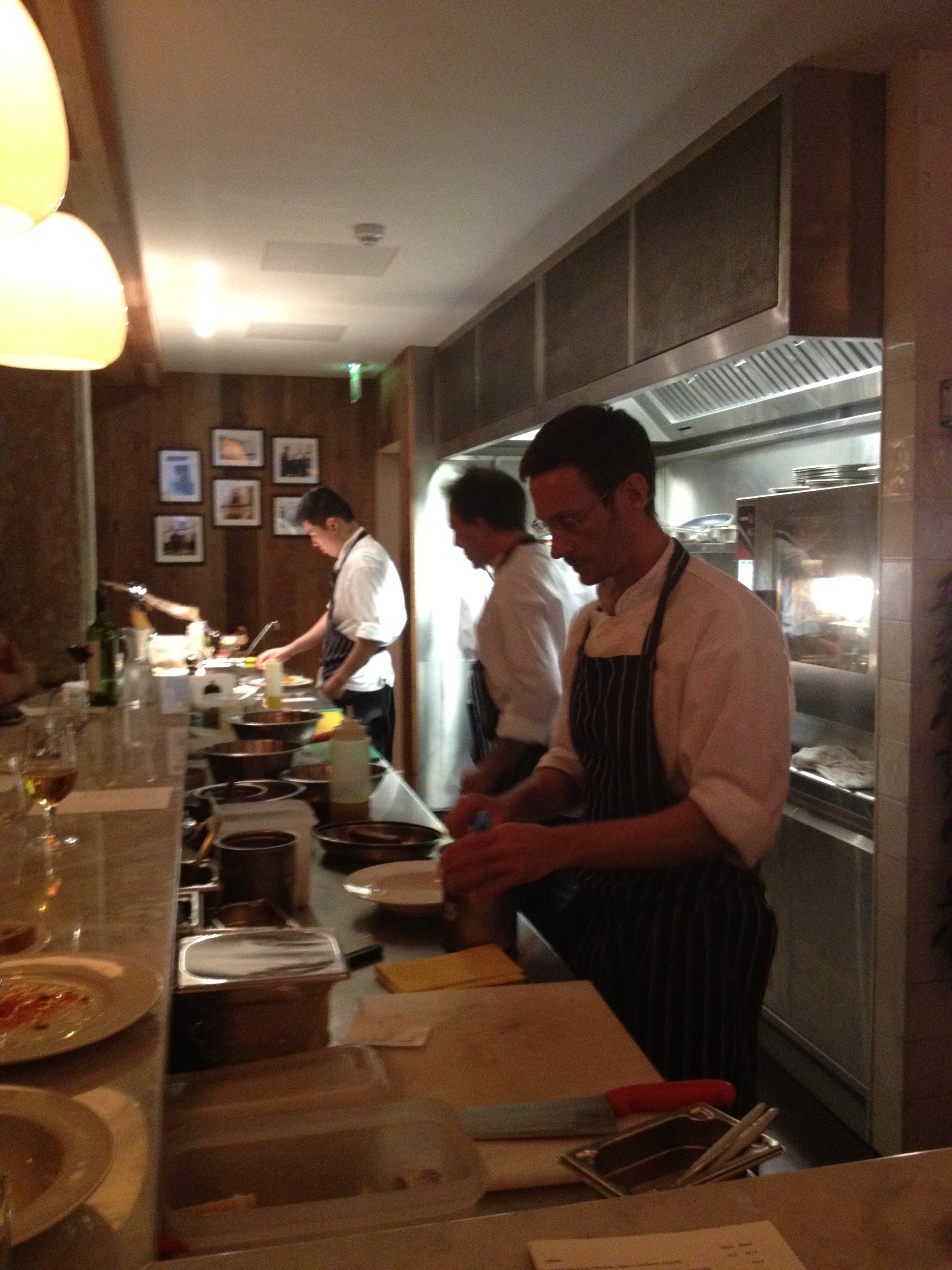 Josè Pizarro is becoming a legend. With his new cookbook Seasonal Spanish Food under his hand and success at tapas bars Brindisa in London, opening his own place was just the next reasonable step. His sherry and tapas bar José on Bermondsey Street is very small taster of his Spanish heritage, but if you walk a couple of blocks further you can taste his daily changed rainbow of flavors at the full-size restaurant Pizarro. 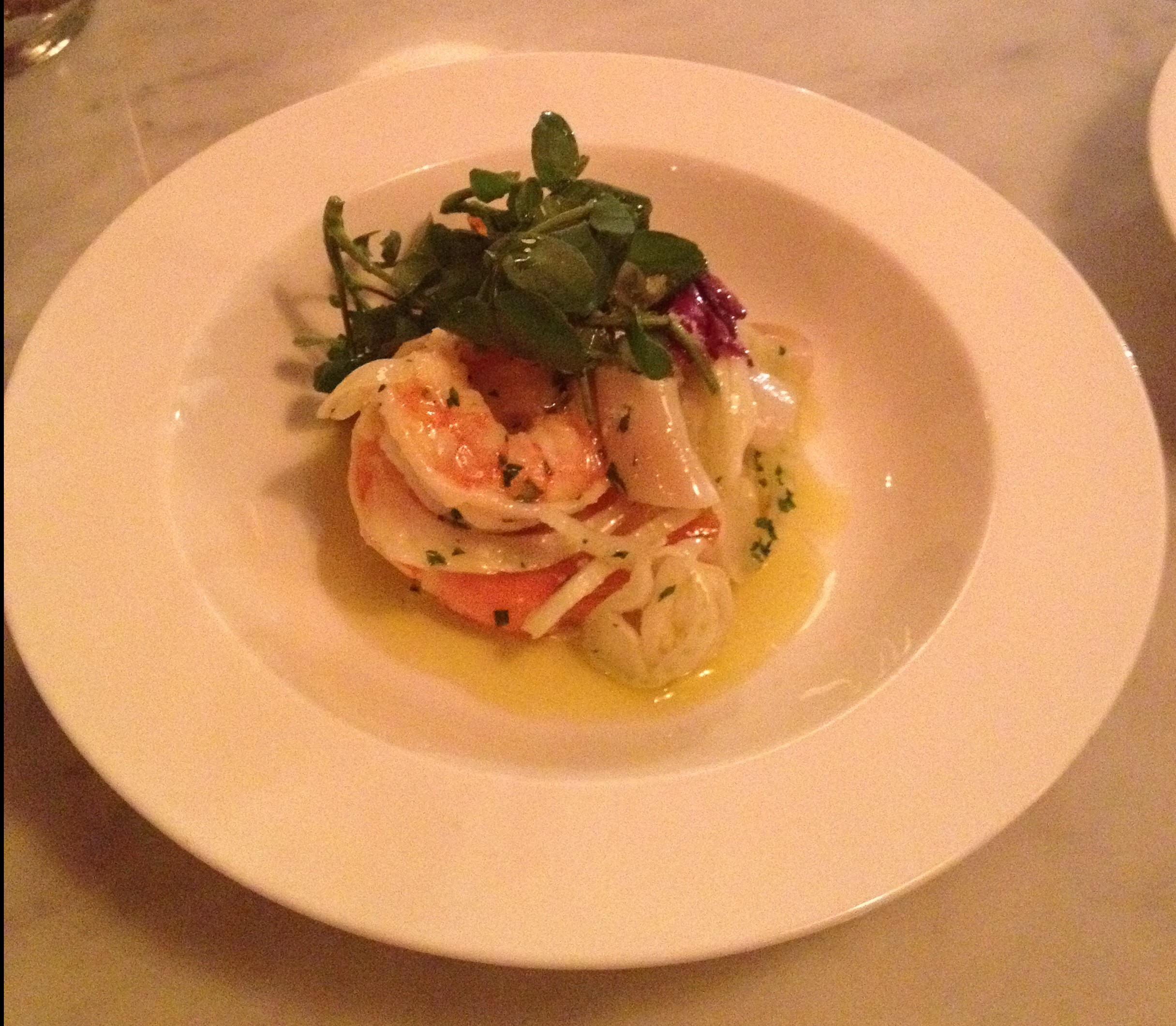 Atmosphere: busy, vibrant, rushed but also friendly and casual. The staff is accommodating and explains all the questions you might rise. There are long so-called common tables, the recently highly popular concept of sharing a large table with unknown people has picked up very well in the over-crowded London.
Food: basic, rustic recipes using mostly local and fresh ingredients the chef sources on London’s markets. The restaurant’s proximity to the famous Borough market calls for a visit by the chef. After all, it was there where Brindisa, Pizarro’s first successful tapas adventure is located.
His tremendous skill to find the right ingredients proved with our first order – Jamón Ibérico Manuel Maldonado. An outstanding leaner ham pleasing even the harshest critics of chewy fat in meat and preferring the clean texture of pure meat.
Ceviche is another dish on which the quality of ingredients shows off. This Peruvian fish and seafood inspired dish boosting with lemon and zesty onions got a makeover by Pizarro. Adding the olive oil and some crispy greens have transferred this currently fashionable dish to a Spanish richer tapa. After all who knows if it were not the Spaniards who introduced ceviche to Peru and Chile, since their influence during the conquest of the region is indisputable. 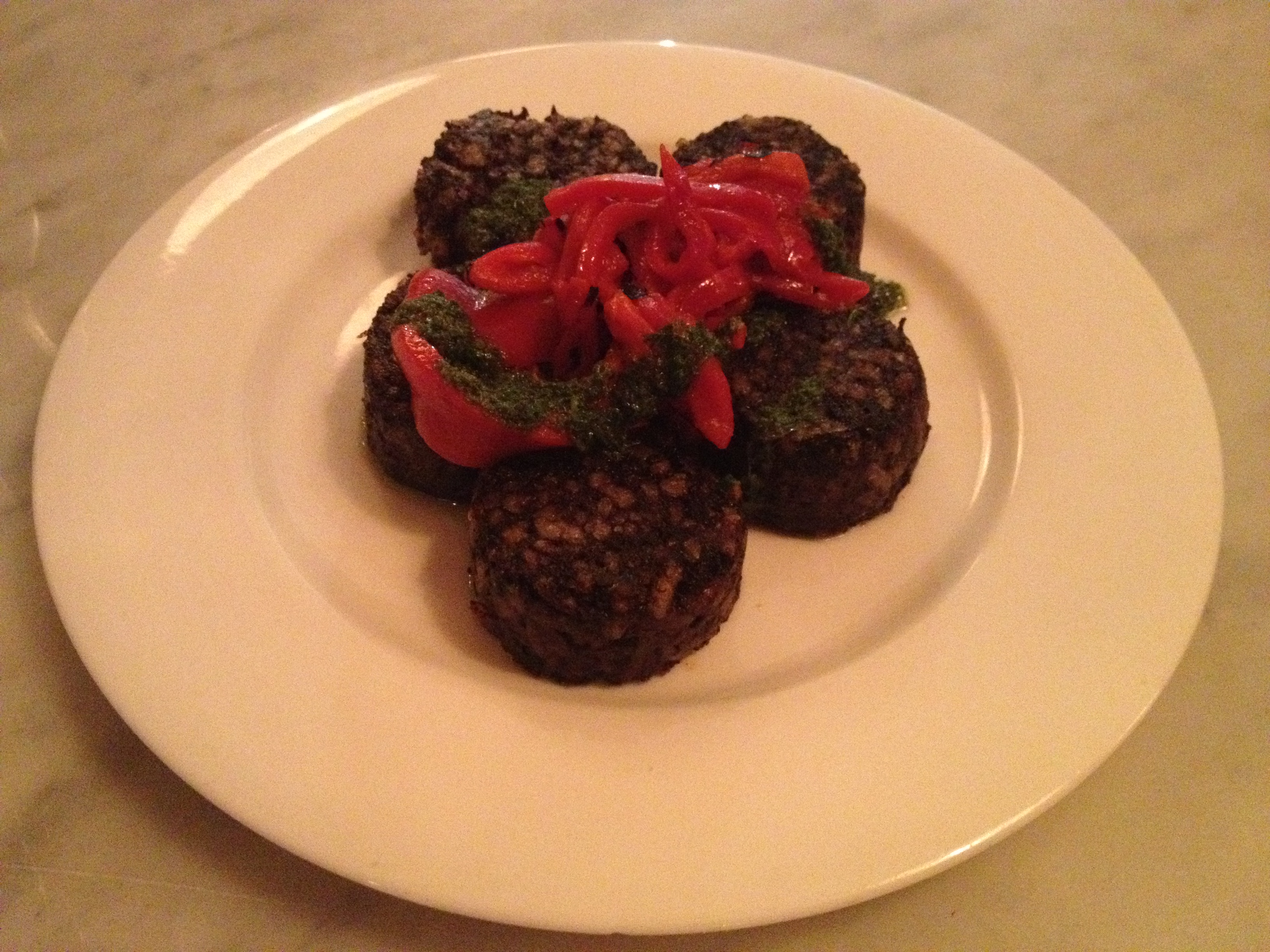 Morcilla is the Spanish name for a blood sausage. The Iberic drier, less blood-leaking version is perhaps my favorite from the all national takes I have had in Europe so far (France, UK, Czech Republic, Slovakia and others have their own versions of this dish). At Pizarro it is served with grilled stripes of red peppers sprinkled with herbs and olive oil. What a treat with a glass of full-bodied Rioja or even the power-raging Priorat. This dish is an interesting interplay between cold and warm courses. I would not start with it as it has quite powerful taste and any lighter dish would vanish in the terms of taste profile after this delicacy.
One of the possible followers though may be Croquetas, the fried balls filled with cheese and potato mash. The croquettes are rich mainly because of the addition of aromatic sheep cheese giving the balls a more chewy texture. Really tasty take on this Spanish staple food. 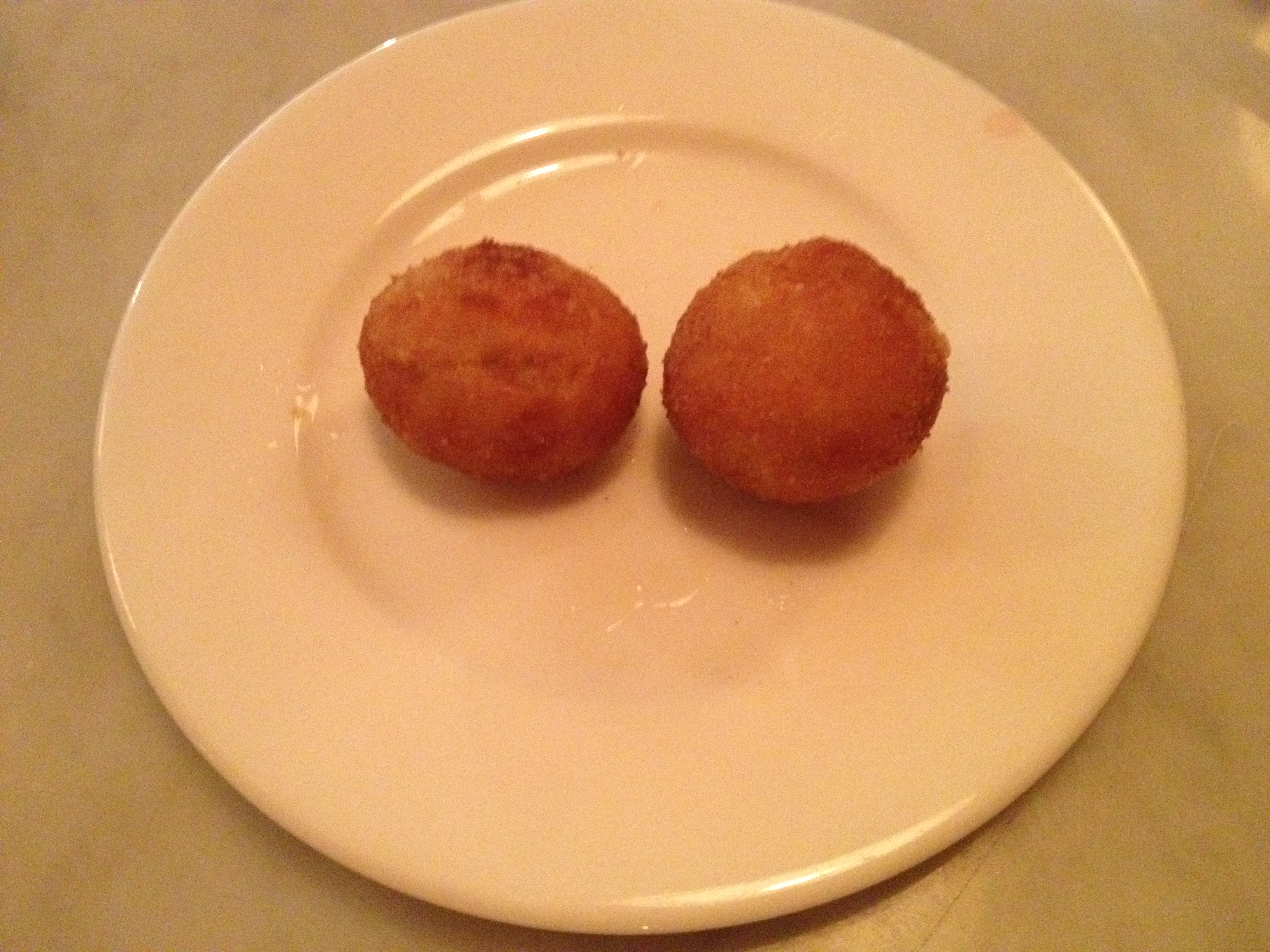 Checking out the “daily specials” board hanging on the wall, we have switched to one lighter dish – a crispy salad with sheep cheese. A great starter or a refresher after heavier meat-based tapas. Crisp lettuce leaves and celery were mellowed by the soft cheese and olive oil based dressing. If they offered it again I would go for it without thinking. 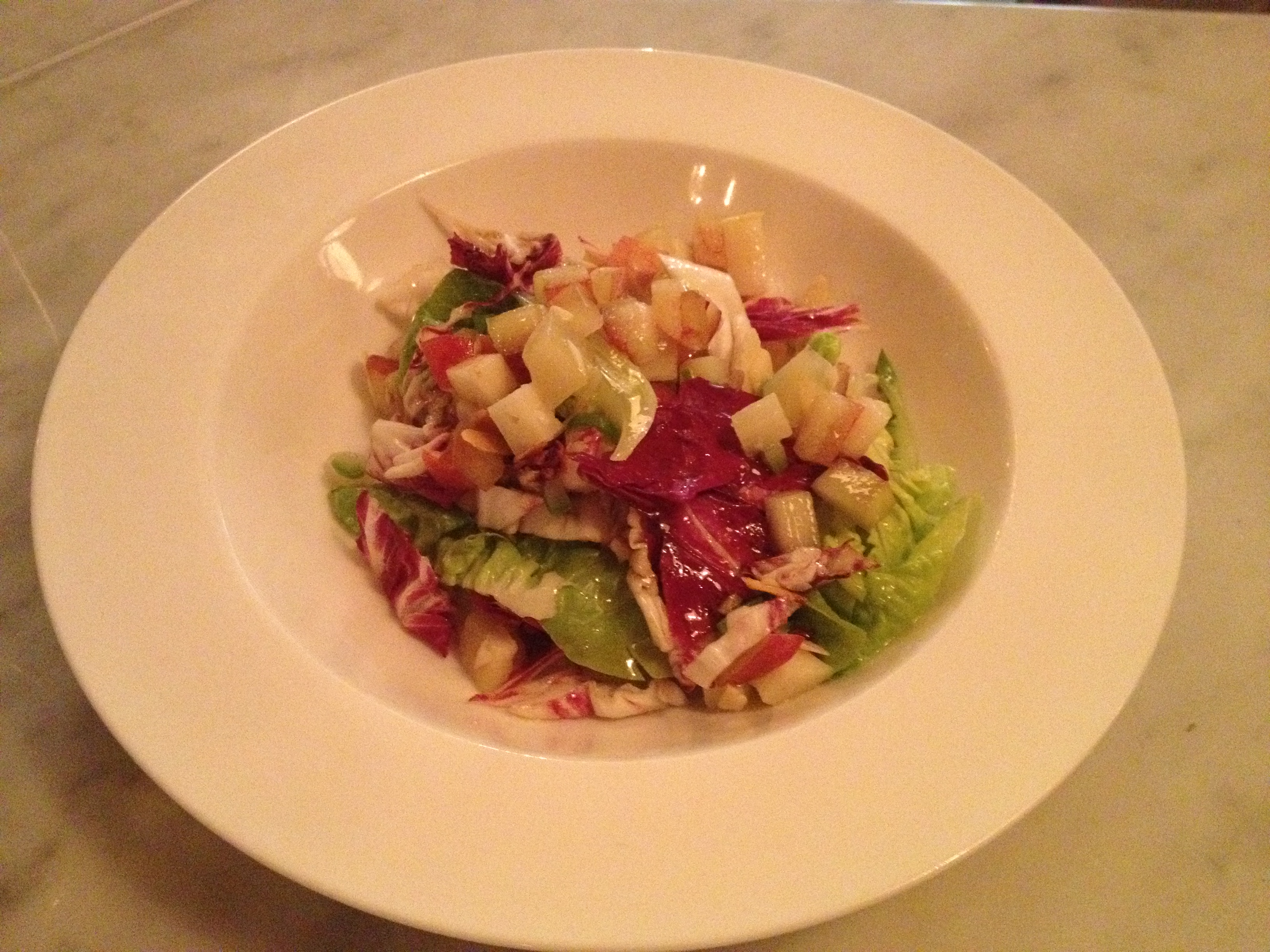 The most creative dish from our tapas selection was a Lentil stew with carrots, mushrooms and almonds. It does not have the look of a posh dish, yet it is supreme! The combination of lentils with mushrooms, almond flakes and veggies would have never came to my mind. It is this daring and original combination of ingredients what makes Jose Pizarro a great chef. 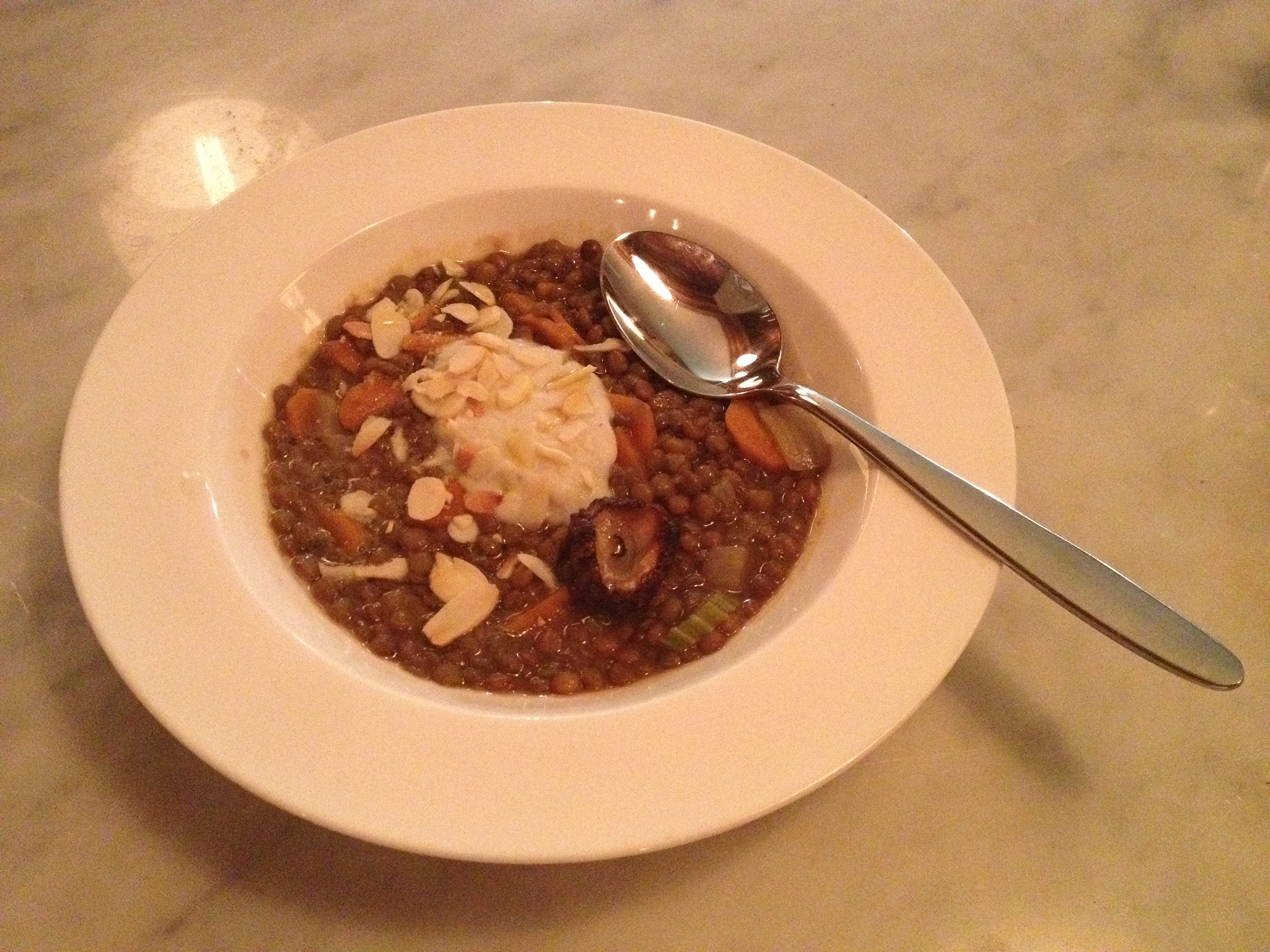 Cusine: Spanish tapas
Visit: July 2012
Price: Medium. The quality speaks for itself – a plate of an excellent Jamón Ibérico Manuel Maldonado comes to £20.00, but croquetas (croquettes) and other similar tapas around £6.
Drinks: A large choice of cava, sherries and wines by the glass from all over Spain. From a glass of Godello to a blend of for Spain quirky sounding Hondarribi Zuri with Hondarribi Beltza, one can try so far unknown varietals for him/her or stick to a familiar glass of Rioja or Albarinho. Dessert wine by the glass feature on the list as well. And if you would rather some beer (cerveza) with the tapas the Alhambra Especial will not disappoint.
Contact: +(44)020 7378 9455
Address: 194, Bermondsey Street, London SE1 3TO, UK
Opening hours: Mon-Fri 12.00– 23.00; Lunch 12 noon – 3pm & Dinner 6 – 11pm
Bar open all day serving cold cuts, coffees and desserts 12 noon – 11pm
Sat 12.00 – 23.00; Sun 10.00 – 22.00 Bar and restaurant open all day – Brunch Menu 10am – 2pm