Perhaps, it was the need or the thirst of the priests for the mass wine, guided by the divine spirit, that the Pope incentivised the extension of the wine plantations on the rocky soil around the village.

In the 14th century, the period when Popes relocated to Avignon, the Pope Jean XXII chose Châteauneuf as his summer residence. Perhaps, it was the need or the thirst of the priests for the mass wine, guided by the divine spirit, that the Pope incentivised the extension of the wine plantations on the rocky soil around the village. The vines were planted there well before. The Gauls and the Romans cultivated vines for winemaking and spread their traditions across Europe. The Pope was one of the first wine producers in Châteauneuf though, soon to be called Châteauneuf du Pape (The Pope’s New Castle). 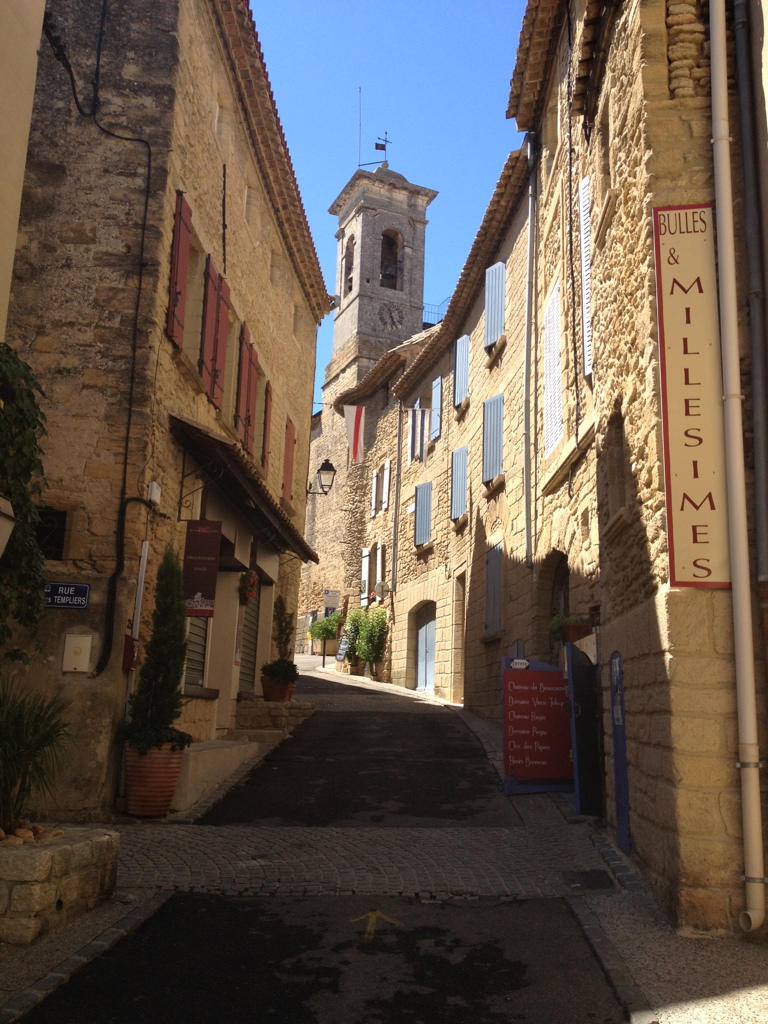 In spite of the divine motivation, it was not until the 18th century before the wines of Châteauneuf du Pape gained an international fame. One of the most apt local wine growers was Marquis Tulle de Villefranche, also the former proprietor of today’s Château La Nerthe, who exported his wines through a network of dealers asking high prices, which many of his aristocratic clients did not hesitate paying. It is a paradox today, that the majority of the French do not want to pay the high prices that the wines of Châteauneuf du Pape dictate, but the profits from the 70% (approximately) exported wine allow for the wine business in the region thrive.

Settled between Avignon in the South and Orange in the North, Châteauneuf du Pape is located in the lowest part of the Rhône Valley in France. It is known for its stony soil covered with galets roulés (oval-shaped stones). These round pebbles reflect sun, and in doing so keep moisture in the soil during the warm summer months. The reflected heat also assists with drying the grapes after rain so many diseases that thrive in wet conditions are kept on bay. Here, you see the divine power!

The AOC Châteauneuf du Pape is unusual in that sense that 13 grape varietals are permitted in its red wines. Not all the châteaux though plant all of them. The two most famous – Beaucastel and Domaine du Vieux Telégraphe – include all 13 in their vineyards. Is this yet another Christian coincidence? 13 equals Jesus plus his 12 Apostles. Intriguing.
Just for an illustration, look below at the picture (excuse the wine stains, I took it after a wine tasting served on this very sheet of paper), where each of the local grapes’ aromatic and gustatory contribution to the blend is explained very well. 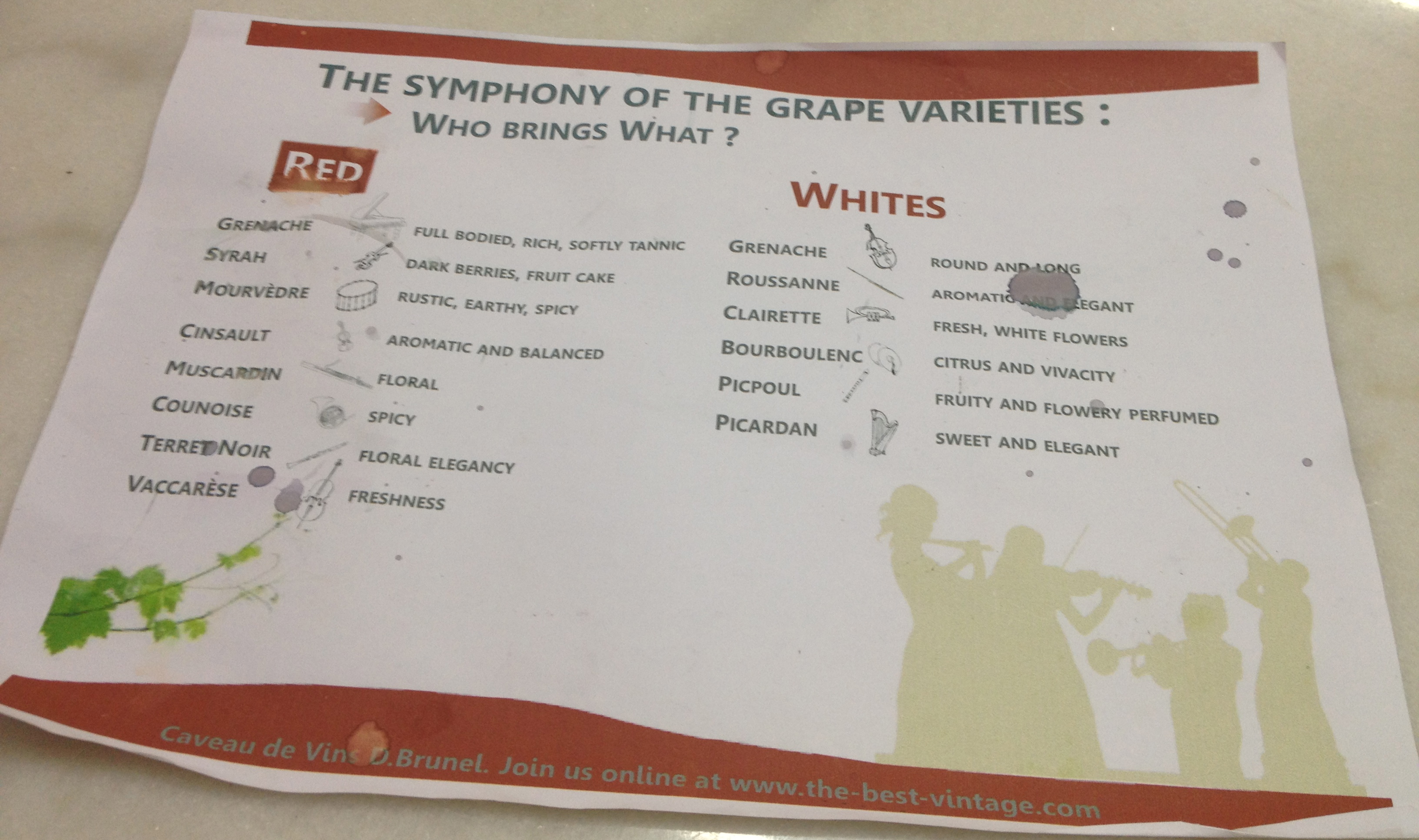 The remains of the Papal castle are located away from the town’s centre and, unless you get lost in the wine cellars lining the narrow cobbled streets, you can reach it within a five-minute walk. It has been ruined over the centuries, but the dilapidated castle offers magnificent views across the Rhône Valley, Luberon and even part of Avignon where the former Papal palace is located. The town’s heart is Place de la Fontaine, where the famous restaurant La Mére Germaine sinfully seduces thirsty flocks of tourists and visitors from around the world. 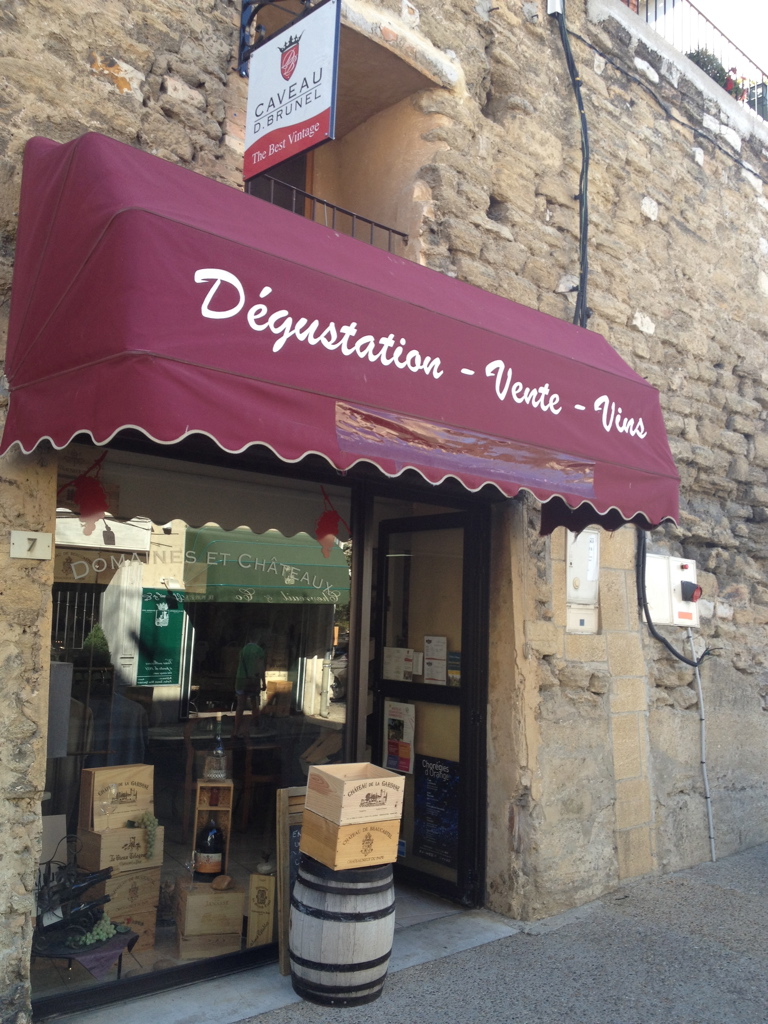 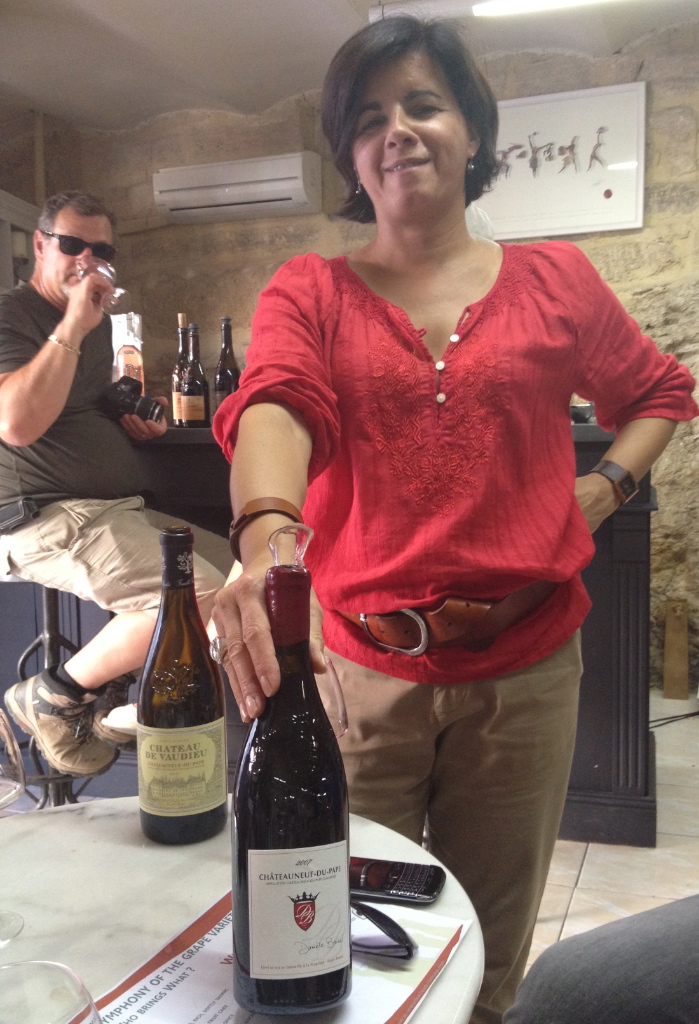 In the Place de la Fontaine’s proximity there are many wine tasting cellars offering wines from different domaines. Most of them do not charge for the tasting, but you will surely please them if you buy the wines you liked the most during the degustation directly from them. Their prices are better than at the restaurants and surely they will sweep the much higher costs of these wines abroad.

The unusual bottle shape was not the first think that stroke my eyes at the family-owned Caveau d’Brunel. Rather it was the friendly and smiling French (!) lady that was offering the wines for tasting. She explained the story behind each wine and she was especially proud of the red blend Danièle Brunel made by her family. The Brunel family owns vineyards in the Châteauneuf du Pape, Côtes du Rhône Villages, and Rasteau appellations.
My absolute favourite from all the wines we tasted there (including a half bottle of Domaine du Vieux Telégraphe 2009) was the Château de la Gardine Cuvée des Génerations Gaston Philippe 2009, so we bought a case, and after over seven years it is still drinking very well.
Balanced, concentrated, yet still keeping elegance, this red blend of Grenache, Syrah and Mourvèdre was juicy, deep and long tasting. 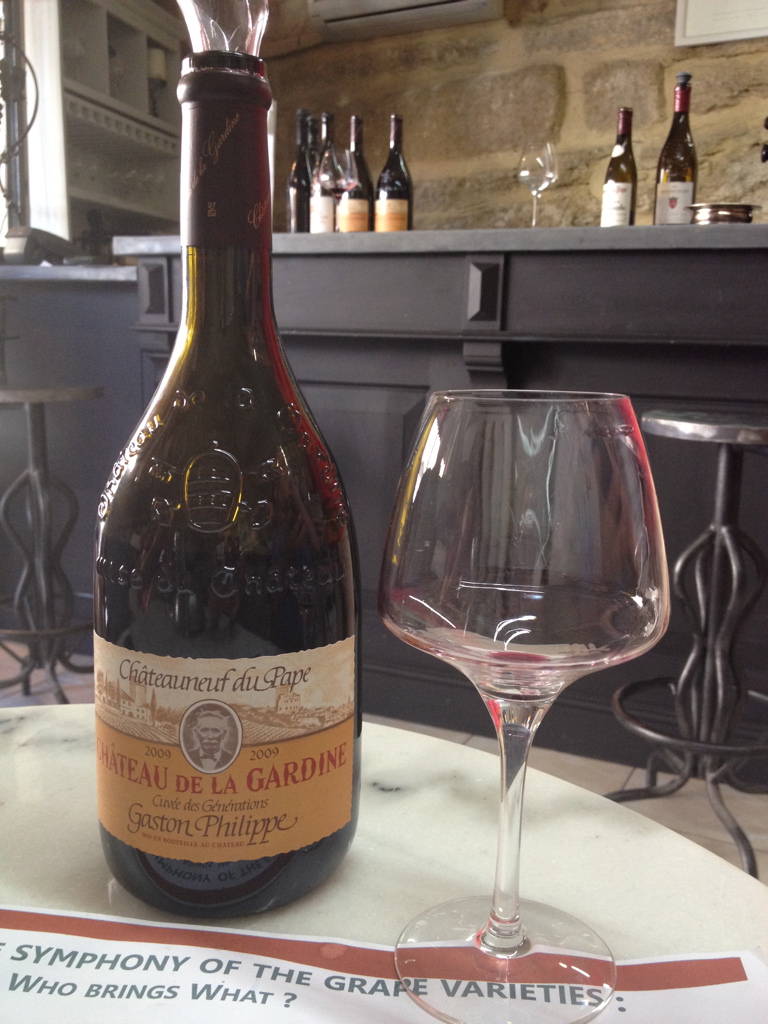 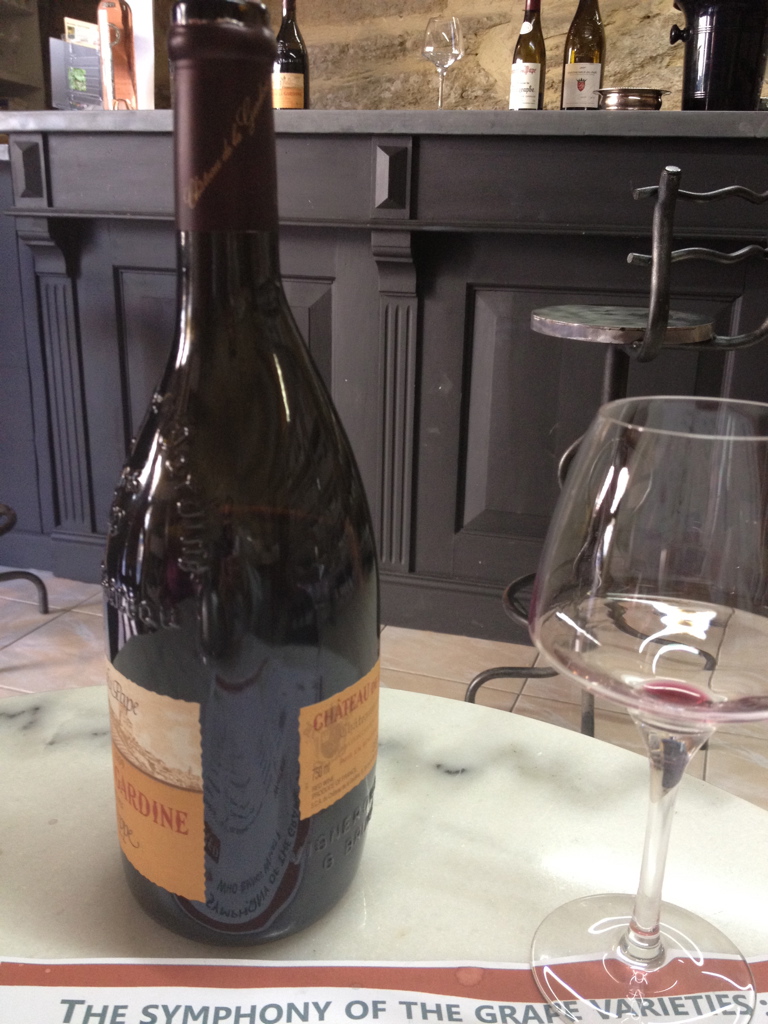 There are many other cellars, but Caveau D’Brunel was recommended during our lunch at La Mére Germaine and we very much enjoyed the experience.
For an interesting comparison of old versus modern style wines from Châteauneuf du Pape look at these choices by Eric Pfanner in New York Times July 21-22, 2012 article Rustic Jewel of the Rhône Meets Modernity.