Great news for big drinkers is that the consumption is unlimited, so if you order two wines or six, you can consume a full bottle of each. You pay per person, so the calculation is very smart, unless you drink like Churchill.

It started with wine and evolved into the unmissable Florentine reference to fine Italian gastronomy. Enoteca Pinchiorri has become a dining legend in Florence and Italy as a whole. Segnor Pinchiorri’s cellar intrigues anyone from the local winemakers, winery owners as well as the international wine jet set. The first time I dined there it felt like a wonderland. In Italy food tends to be straightforward, simple, honest, yet here my curiosity was matched with tastiness.

Chef Annie Féolde has cooking in her blood since her parents worked at a restaurant in Nice. Meeting Giorgio Pinchiorri in Florence who wanted to do something substantial with his imposing wine cellar moulded the French lady into one of the most cherished chefs in Italy and the first woman to be awarded three Michelin stars there. Ironic, a French chef in Italy! 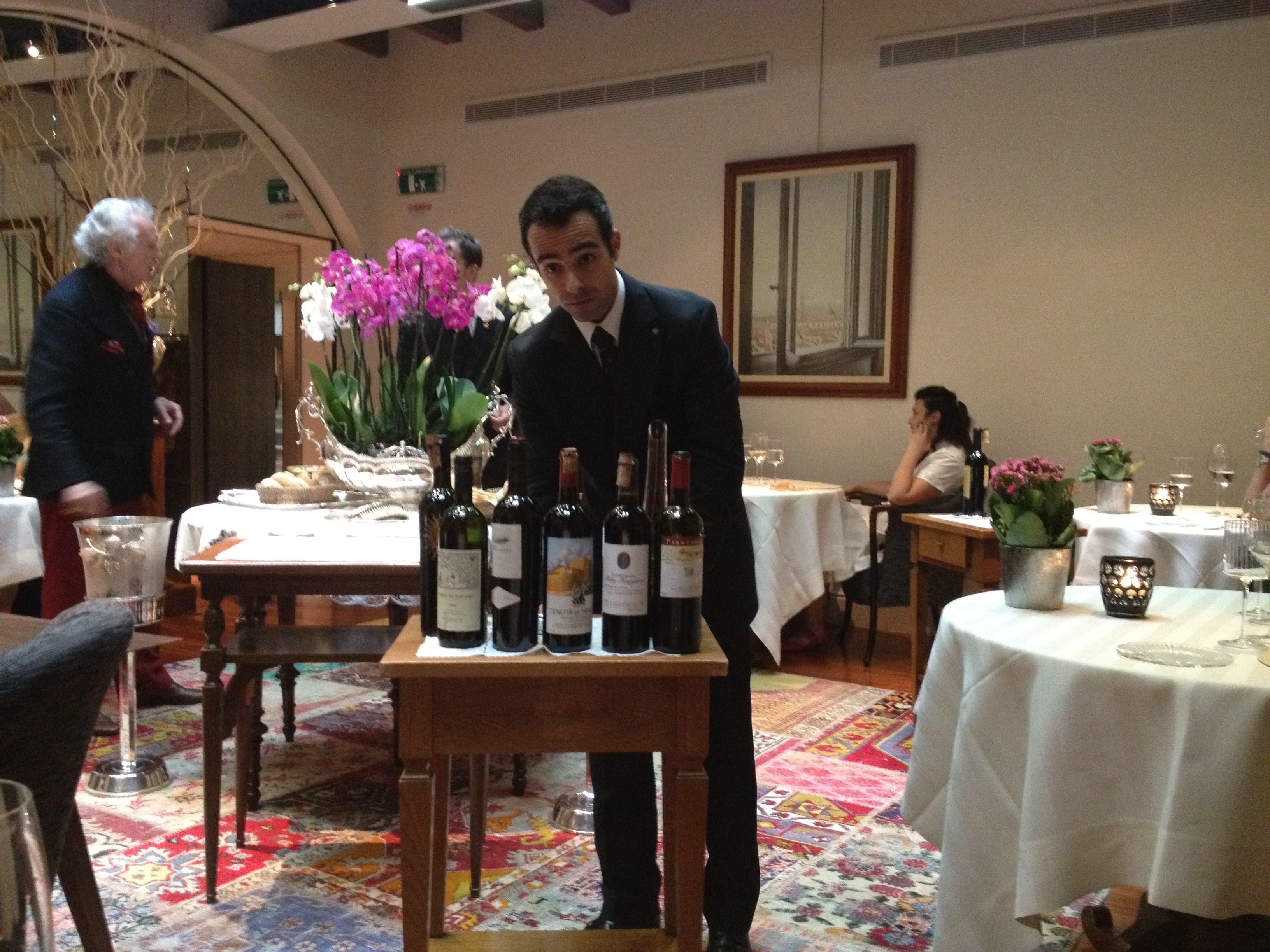 Her innovative contemporary Italian cuisine has a strong affinity to traditional Tuscan cuisine. Intense, and my first experience at Enoteca Pinchiorri impressed. The new chef RICCARDO MONCO and recent shift felt more like her struggle with originality. Still, some dishes were great and the stars remained. Starting with a delicious small grilled crisp octopus with zucchini puree, the Mediterranean bounty was persuasive of a good taste. The first course of Poached egg with anchovy butter and vegetables from our garden (green beans, zucchini) was melting nicely, yet the curly parmesan cheese on the top of the egg was too dry. 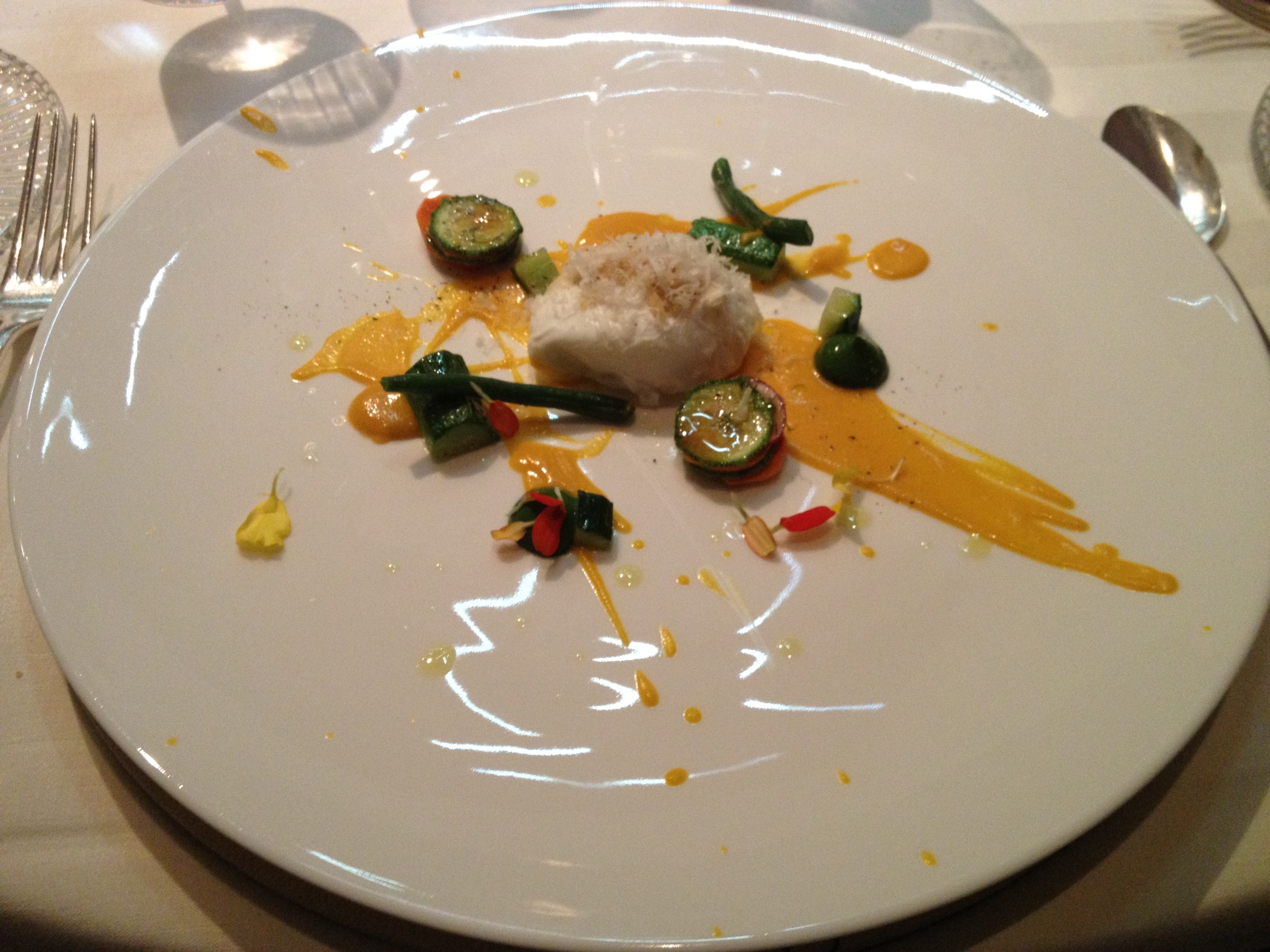 Then came Orata or Dorade marinated with wild fennel and basil, quinoa with ginger, potato mayonnaise and beetroots. Refreshing and different. Would I call it very tasty? Not, it was good enough. Quinoa is fashionable on the menus worldwide, but I did not find it working well with the gilt-head bream, potato and beet puree. 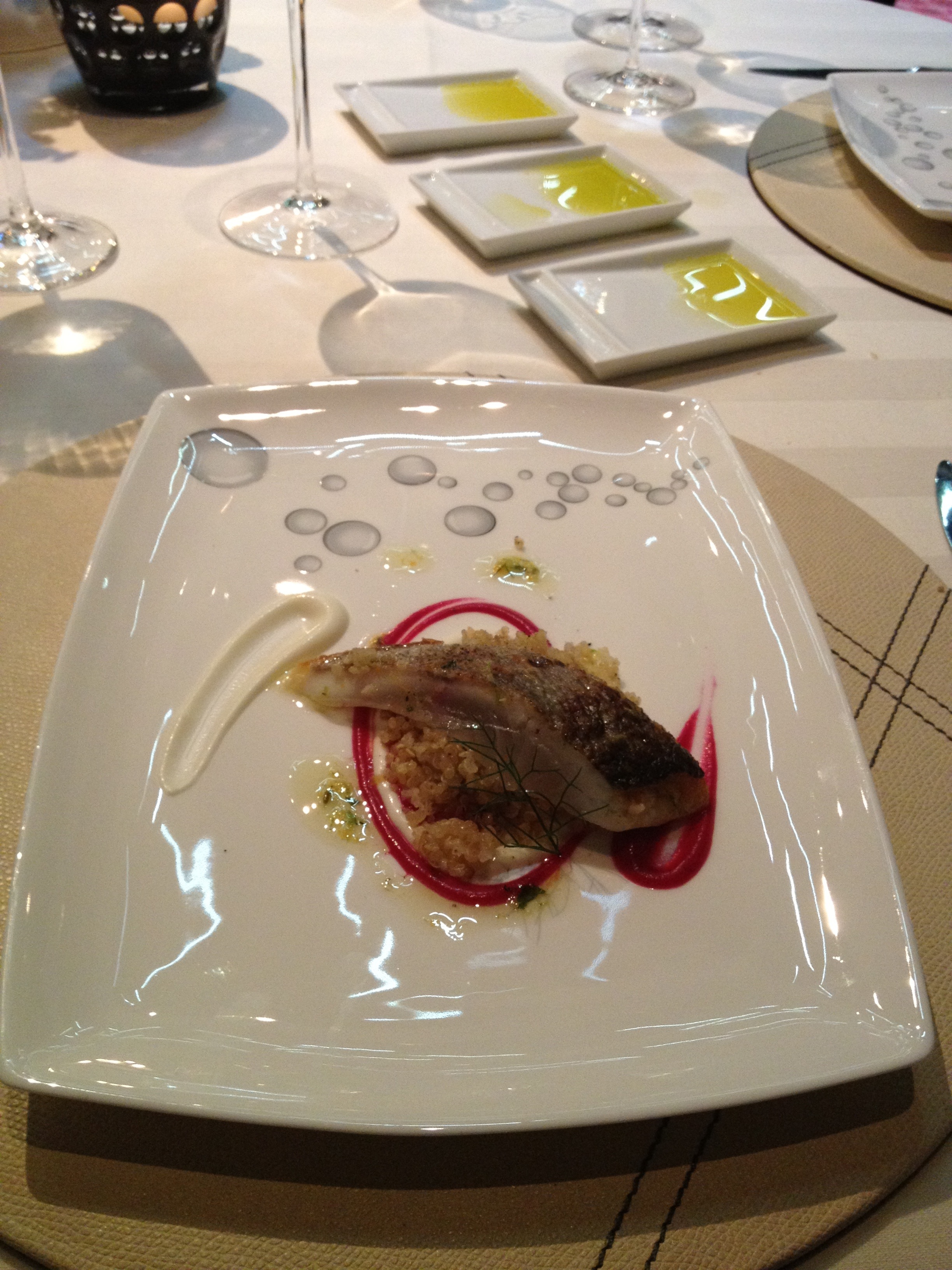 The tender and succulent Lobster with coriander and almonds, eggplant and lime, zucchini and red wine sauce was strangely prepared. The crust of almonds was like a popcorn coated in chocolate with chilli and pepper – over-combined. 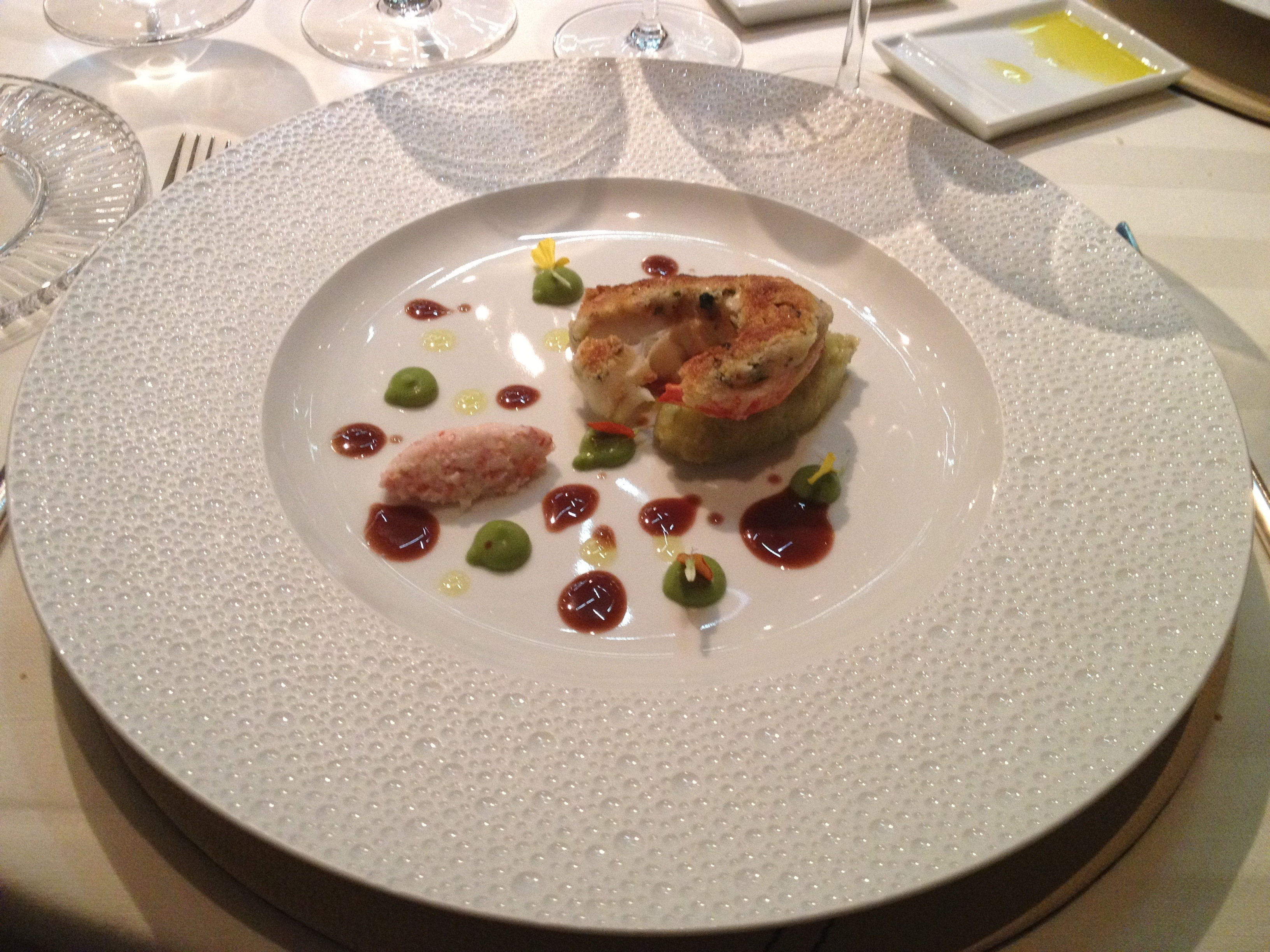 The best dish for me was the Risotto tossed with melted onions, capers from Pantelleria and Taleggio fondue, creamy, but not too heavy. Added capers and onions unexpectedly balanced the melting cheese fondue in the risotto.
I am not a fan of pork so instead of the “Mora Romagnola” breed baby pork with tomato, zucchini, marinated egg-plant and onions in the tasting menu, I had good, sliced, juicy duck cooked with the same ingredients.
The desert, although sounding lofty on the menu, turned out more like the mignardises with coffee or tea I am used to at three start restaurants. From the Sorrento lemon to the limoncello: verbena Madeleine with lemon ice lolly and lemon white peel cream; honey biscuit and almond milk was a tiny slice of cake with a fluffy lemon foam on the top. The mini desert trolley was more rewarding. I picked some chocolate, a berry cake and a juicy pineapple on the stick and was satisfied. 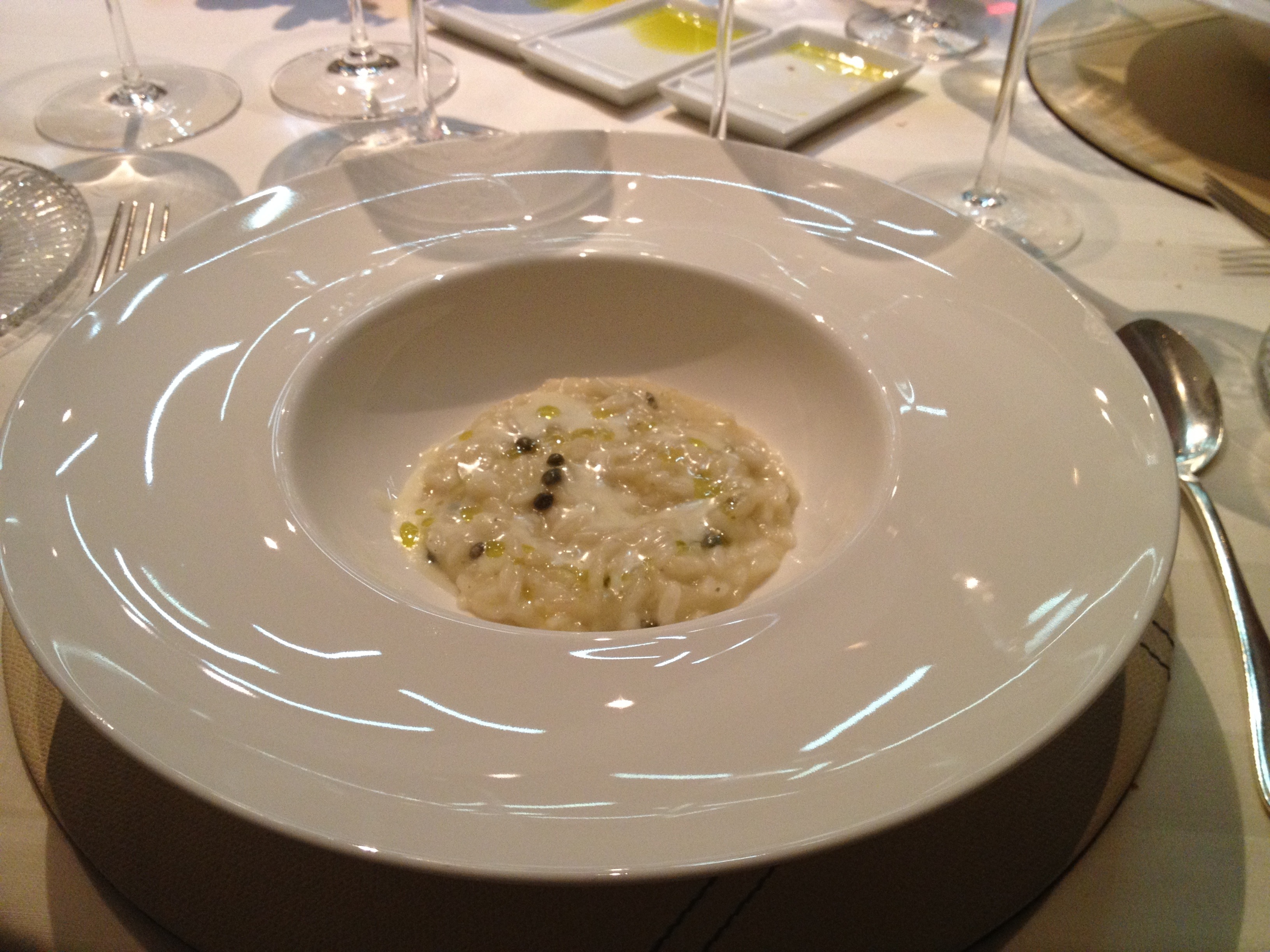 The water menu is elaborately sourced from all over the world – Italy, New Zealand to the Czech Republic. Some bottles cost up to €25, while the home-welled San Pellegrino was included too. It is not enough that you will spend a fortune on wine here, but water!? Perhaps for the abstinent to splurge too. I wish they stick with local sources. There are many springs all over Italy.
The wine list at Enoteca Pinchiorri is spectacular and next time we might go for a bottle, yet this restaurant is so special for its wine selection, that on each visit we had to go for one of the wine tasting menus. The more famous and rare the greater the sum. Great news for big drinkers is that the consumption is unlimited, so if you order two wines or six, you can consume a full bottle of each. You pay per person, so the calculation is very smart, unless you drink like Churchill. I savoured only a feminine small glass of each of the six wines we have chosen. Giorgio Pinchiorri himself was generous and offered us two extra wines to taste.
Cervaro della salla from the Italian wine scion Antinorri was good enough Chardonnay. My favourite though was the red Merlot Piantonaia from the Chianti region. This single vineyard small production (about 1000 – 2000 bottles per vintage) was sublimely balanced and elegant. The Spanish blend of Grenache, Cabernet Sauvignon and Cariñena L’Ermita 2000 by Alvaro Palacios from Priorat was intriguing, deep and complex. No wonder it is considered as one of the best Iberian wines. 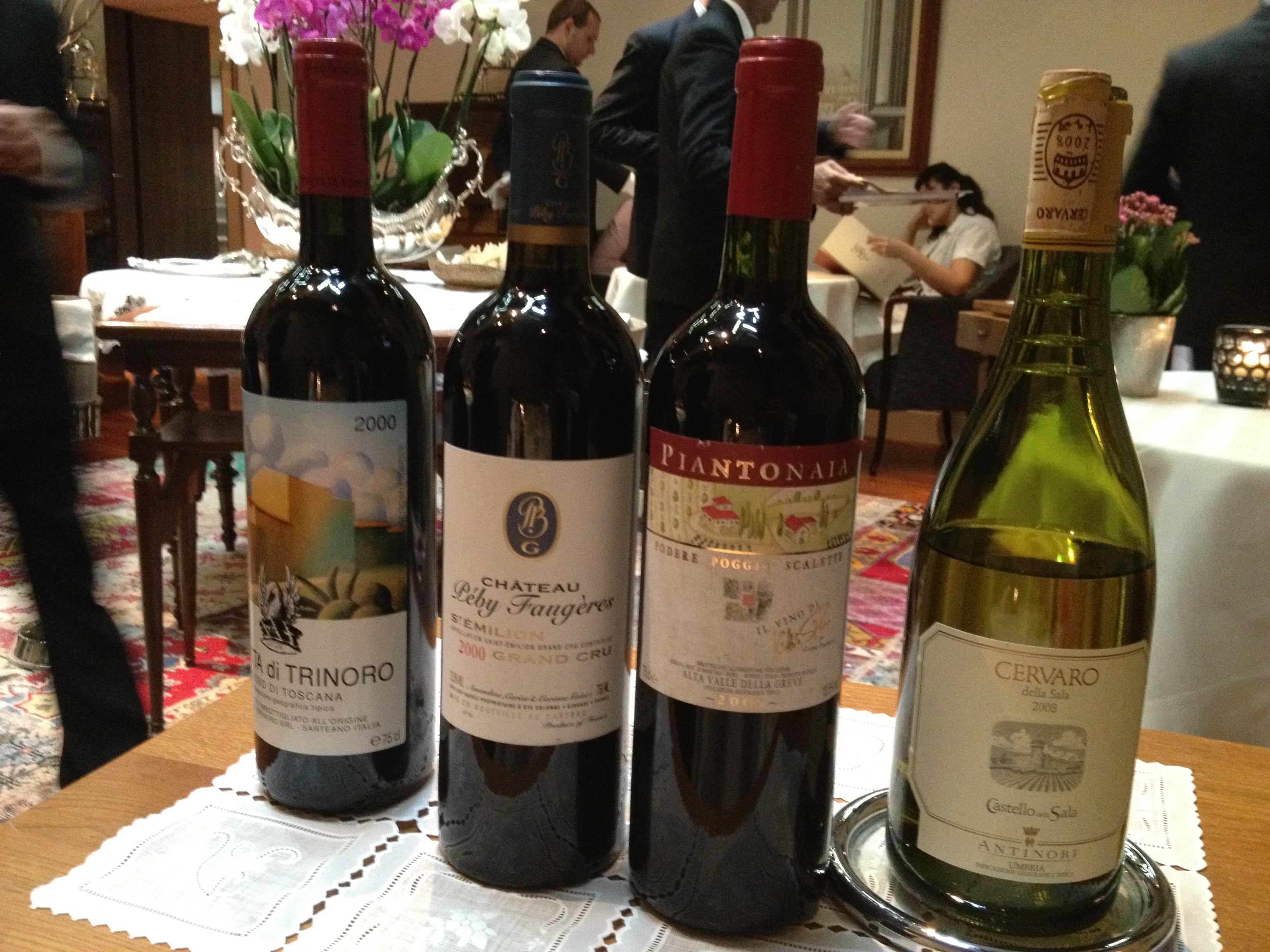 Enoteca Pinchiorri takes over two floors. Feeling like a house with different rooms and ambiance, downstairs more traditional, while the upstairs is a bit more modern. Flowers and plants create freshness, cosy furniture comfort and friendly, attentive staff happiness. Elegant jacket is recommended and ladies will feel comfortable either in a dress or smart pants.
The meal at the Enoteca Pinchiorri is way above what you are used to in Italy (six-nine courses degustation menu between €225 – €275), a la carte with starters around€70 and mains in the €100 sphere. The wines reach up to thousands of Euros – dizzying Bordeaux like Château Lafitte and La Tour feature in the Degustazione di vine a bichere (by the glass wine tasting) menu, but many great Spanish, German and other mainly old world bottles join in. The cellar seems bottomless!
Tue – Sat: 12:30-10pm; Annual closing: August, Christmas and January 1st
+39 055 242757 or +39 055 242777
Via Ghibellina, 87 50122, Firenze, Italy