It is advised to wear something “Aspen casual” at the Caribou Club, meaning rather expensive or at least a stylish mountain outfit, but no shorts, flip-flops and even – hats! Being French chic is a taboo at Caribou. Although Aspen is more relaxed than St Moritz, another strict policy at the Caribou Club is that everyone MUST check their coat in before entering the club’s flamboyant premisses. No fur abundance inside, but still Caribou remains the most exclusive address in Aspen. If you are into rubbing shoulders with the local influencers and Hollywood celebrities, give in to its brash NO NO policies. 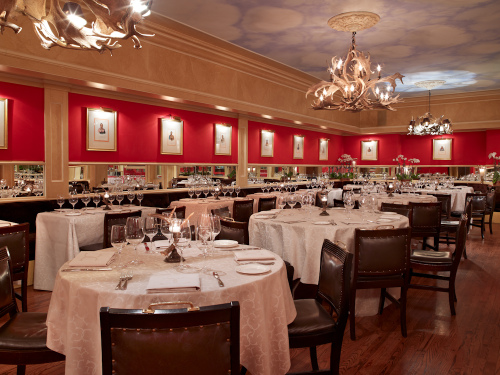 The main dining room is elevated by voluptuous horn curves forming chandeliers hanging down from a sky-blue painted ceiling, luxe Frette table cloths and red lip sexy walls. For members or the well connected, who are allowed in, the Club lounge and the Great room that turns into a dance floor as the evening progresses are both set for lounging, playing poker or hopping to the DJ’s rhythms.
Food-wise, the starters are for America reasonably small, yet the mains may put you back to cyclops’ dining table so be ready for the feast. Worldly ingredients blend with the local hearty style. The caviar menu of either the Sturgeon, Oscietra or the Golden Oscietra can be relished anywhere within the club. The Caesar Salad (Table Side for Two) is prepared at your table as in a classy restaurant.
I was in a sampling mood, so ordered the Five Tastes from the Sea of an assorted raw seafood. Changing daily depending on availability, ordering it seven-times a week should never get boring. In my “catch” there was a refreshing shot of oysters with fish and seafood sashimi originally dressed. The Florida crab claw comes with strangely sweet mayonnaise, which got me wondering if a pinch o sugar did not accidentally dropped in. A glass of champagne (or a bottle?) is perfect with either the caviar or the raw seafood. 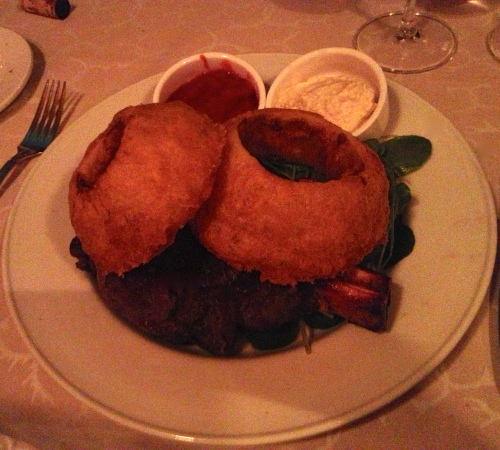 From the meaty mains, the local Blackened Bison Tomahawk or the Antelope steak from afar may sound a bit too exotic, but I had to try the later when dining at Caribou Club on another occassion. The meat was gamey rich, lean, juicy and reminded me of venison. A delicious once in a while treat.
The Prime Ribeye of Angus Beef that was dry aged for 42 days, fire grilled, crowned by giant beer battered onion rings, and accompanied by house-made creamy horseradish cream as the standard American indulgence. My husband was very disappointed by the too fatty meat as he remembered getting a great steak there before. These onions were like a soccer ball! Not much flavour, just big eyes and no substance, just greasy batter. At the Piñons restaurant also in town these giant fried onion rings were crisp and more completely indulgent.
The pasta dishes at the Caribou Club like the Barbecued King Crab & Sweet Potato Tortelloni wouldn’t probably appear on the traditional menu in Italy, so you may not want to miss the opportunity and try these Americana pasta in Aspen.
I also tried the Grilled Albacore Tuna as my main course. The lemongrass glazed white tuna accompanied by a bok-choy kimchee, turnip cake and straw mushrooms was very tasty, but there was just too much of the fish for one. I loved the garnishes though.
The sorbets and ice cream is quite creative. My picks were mascarpone gelato, pommegranate and prickly pear sorbet, all but the last sattisfied my sweet cravings. The complimentary chocolates served later were boring, nothing artisanal.
After the dinner I would not rush to your chalet or hotel and stay for a drink or tea in the Great Room. The cosy chairs, cracking fire-place and the home-cosy decoration will glue you in. 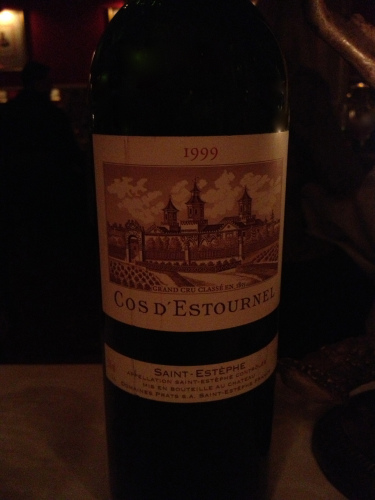 From the wine-by-the-glass selection I was particularly impressed by the Dr. Loosen, Urziger Wurzgarten, Riesling Spätlese from Germany since it is one of my favourite off-dry wines gushing with spicy tones and a good acidity to balance the sweetness. It is not ideal to start with, rather have it as a milder dessert wine after the meal. The list is rich in older vintages of the California heroes as well as the French classics from Bordeaux, Rhône and Burgundy. The Cabernets from the legendary Heitz Cellars, Martha’s Vineyard, Beaulieu Vineyard as well as Opus One, lots of Meritage and Pinots (my New World favourites are from Oregon), are all good “local” (US) choice. South America, Africa as well as Australia is represented as well, yet, France and Italy dominate the opulent wine list just after the local Cabs. Some good half-bottles might seduce for a little splurge, just keep in mind that they age faster, and another catch, there are plenty of the 1970s vintages, and as the sommelier emphatically advised, this was one of the worst decades for wines elsewhere. Perhaps, that is why they still remained on their list after the decades of lavish indulgence at the Caribou Club! We appreciated his honesty and bet on a 1999 Cos d’Estournel. As one of the highlights of the left bank Bordeaux, the wine was elegant and smooth. Caribou is a club so the cocktails can be made according to your whims. Tea-to-tellers or detoxers, the wide-ranging tea list is surprisingly good as well!
Open for dinner during the season from 6:30 pm
411 E Hopkins Ave, Aspen, CO 81611
+1 970 925 2929