We should eat and share chocolate with others as it gives us even more pleasure than selfishly and lonely indulge in the hedonistic act of gorging on that leftover birthday chocolate cake. For these of you who are more practical I am sharing these recipes for tasty dark chocolate desserts that I have recently learned during an evening chocolate baking class at the Natural Gourmet Institute in New York. These delicious pastries do not take half day to bake and you do not need too many ingredients so you can make any of them quickly.
Cuisine: Desserts/ chocolate.
Cooking school: Natural Gourmet Institute in New York.
Chef/instructor: Jay Weinstein is a graduate of the Culinary Institute of America and the author of many food-related books. He worked at the Michelin acclaimed New York restaurant Le Bernardin and many others. I admired how well he managed three groups of people each creating chocolate sensations from different recipes. He led us all to success that was rewarded by a chocolate-themed late dinner with a glass of plump and juicy Pinot Noir from California. 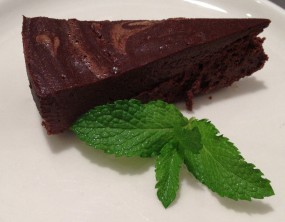 Recipe for the Chocolate Velvet Cake

serves 16 portions
– this cake was a substantial majority favourite of the class attendees.
Ingredients: 8 large eggs; 1 pound semi-sweet chocolate, 8 ounces (2 sticks) unsalted butter; 1/4 cup strong coffee; cocoa powder for dusting.
Method: Preheat oven to 325 °F (162ºC). Grease an 8″ or 9″ springform pan, and line the bottom with waxed or parchment paper. Wrap the outside of the pan in foil to prevent leaks. Prepare a pot of boiling water in which you put a smaller bowl or pot filled with chocolate, sliced butter and coffee. Let it melt a bit and then start stirring it until the substances melt. In an electric mixer, beat the eggs until they double in volume (about 5 minutes). Fold in the whipped eggs in three additions  into the melted chocolate. Mix carefully, just enough to incorporate the eggs into the chocolate. Pour it all into the prepared springform pan and place it into a deep roasting pan. Pour enough boiling water into the roasting pan to come about halfway up on the sides of the cake. Put both on to the lower-middle rack of the oven and bake about 25 minutes, until the cake rises slightly and has a thin crust. You can use a thermometer and stick it into the middle of the cake. When it reads 140 ºF (60ºC) then it is ready. Then transfer the springform to a wire rack and cool to room temperature. Refrigerate for several hours.
* For conversion of °F  to ºC and equivalent gas marks use this chart.
To serve: Warm sides of the springform with a hot, wet towel to let the cake loosen and then pop and open it. Cut with a hot wet knife, which you wipe and make wet each time you cut a new slice. Dust with cocoa powder and place on a plate with refreshing tips of mint, or red berries for a sexy look. 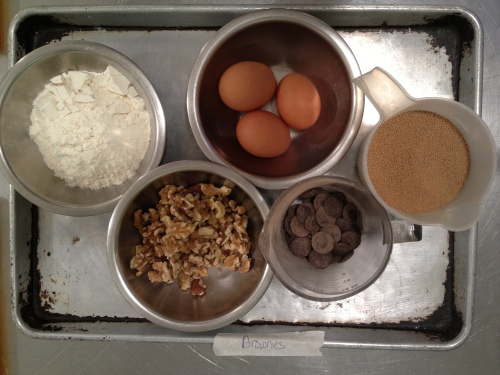 You can make also something a bit more simple like these superb Brownies (these are really the best I have ever had):
Ingredients: 3 eggs; 1 teaspoon of vanilla extract; 1 cup of white flour; 4 ounces of unsweetened baking chocolate; 3/4 cup of butter (or coconut oil); 1 1/2 cups of organic sugar; 1 cup of chopped walnuts.
Method: Preheat the oven to 325 ºF (162ºC). Grease  a 9″ x  13″ sized glass baking dish.
Melt the chocolate and butter together in a double boiler (put a big bowl over a large pot with hot water), leave it melt a bit and then stir it until it becomes smooth and the chocolate is just melted. Take out of the heat, stir in sugar, whole eggs and vanilla extract and at the end the flour with walnuts.
Then you pour all the mixture into a glass baking dish. Bake for 20-35 minutes until a toothpick inserted in the middle comes out with fudgy crumbs. Cool in the baking dish before transferring to a cutting board. Cut into 24 squares and serve.

For the adventurous half of you, try to make a Chocolate souflé (serves 12), which is one of trickiest chocolate baking desserts to keep an eye on – the trick is do not open the oven before they are almost done!
Ingredients: 5 tablespoons unsalted butter; 1/2 cup organic sugar; 8 ounces roughly chopped bittersweet chocolate; pinch of salt; 1 teaspoon vanilla extract (liquid); 1 tablespoon citrus liqueur such as Tripple Sec; 6 egg yolks; 8 egg whites; 1/4 teaspoon of a cream of tartar.

Method: 1 tablespoon of softened of butter use to coat the ceramic pots for soufflé and then coat with a layer of sugar or cocoa powder. Shake it around the buttered dishes so it all gets entirely covered otherwise the dough will stick to the pots. Combine remaining 4 tablespoons of chopped butter with chopped chocolate over a double boiler (put a big bowl over a large pot with hot water) until it just melts. Then stir in salt, vanilla and citrus liqueur.
Correctly whip egg whites in a clean mixing bowl so they stick to the whisk attachment on the mixer and form a V-shaped, snow-like mountain. During mixing add a cream of tartar (usually in a form of white powder). 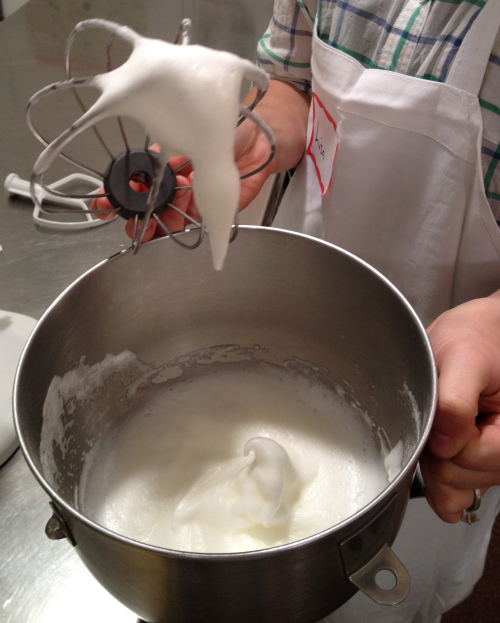 Simmer the sugar with 1/3 cup of water until it dissolves. In a mixer whisk this sirup gradually into the egg yolks that have been whipped slightly before. Whip until the mixture triples in volume and is light in colour (takes about 5 minutes). Fold these whipped yolks together with melted chocolate. 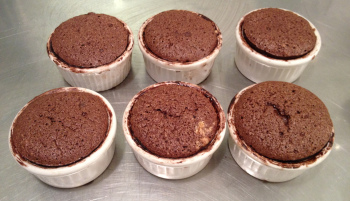 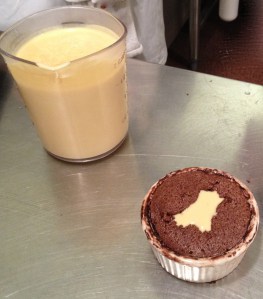 Fold one-third of the egg whites into the chocolate mixture and add them carefully until you use all of them. Divide the batter into the prepared coated ceramic pots, don’t fill them entirely as they will rise after the baking. Level off the tops with a spatula so they are even. Transfer them into a freezer until you want them to serve. Then bake at 400 ºF until fully risen for about 18-20 minutes. Only check them in 18 minutes and do not open the oven before!
This is the result that you serve warm with a creamy vanilla sauce poured in the middle of each individual soufflé (make a small howl with a spoon into the centre).
Next to the chocolate baking class, this calendar of Classes at Natural Gourmet Institute in New York can help you with planing ahead.
+1 212 645 5170
48 W 21st St #2, New York, NY 10010; USA.