The Story is buzzing through London’s gourmet discourse as the utmost place to try now. Its name has nailed it down – the restaurant  became the story of the summer 2013 as one of the hardest dining establishments in London to get into. The chef‘s intriguing background is one teaser. Thomas Sellers is only 26 years-old head chef, who already managed to work at Rene Redzepi’s Noma in Copenhagen (the world’s best restaurant after Ferran Adria’s El Bulli packed it up), Per Se in New York (where America’s top chef Thomas Keller set the tone for innovative gastronomy in the US) and Tom Aikens in London – all the highest calibre of restaurants in their cities. 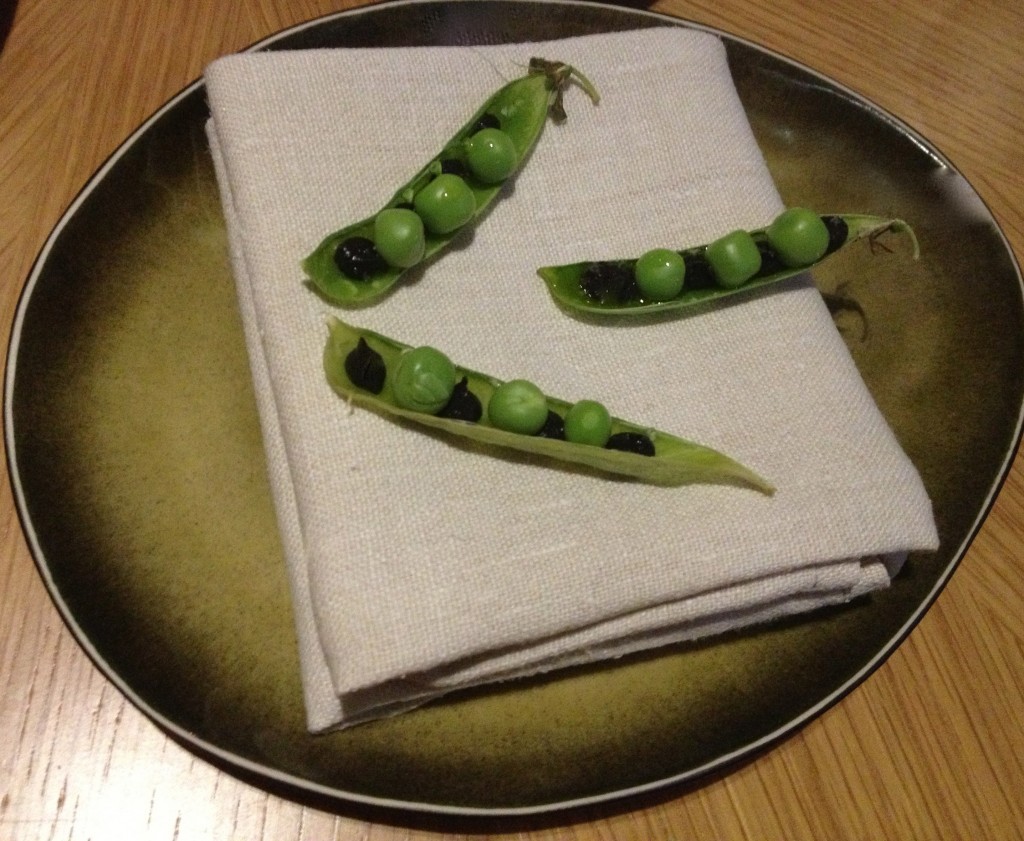 Cuisine: Gastronomic international, full of surprises.
Visit: August 2013
Price: Medium to high (six-course tasting menu £45 is not that high for London, neither it is an average what you would pay for a meal, although not for such a creative multi-course feast). 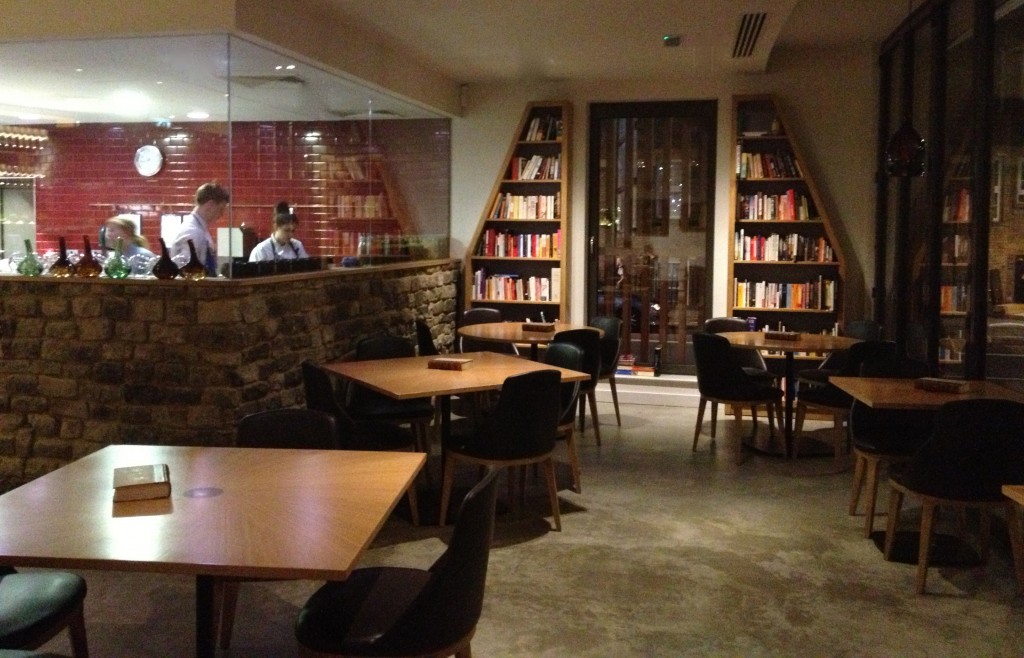 Atmosphere: Built on a former site of a Victorian toilet block, the Story captures attention. The tale goes on with its current location lying in a busy intersection just behind the Tower Bridge, glass windows from top to bottom, and open kitchen allowing not only to the diners but also to the staff behind the stoves to observe the happenings of South London. This unusual and even for many London’s super-educated taxi drivers hard to find spot is further challenging everyone inside with possibility of unwelcome visitors such as happened to us.
I have a great story for you from The Story! Read below … 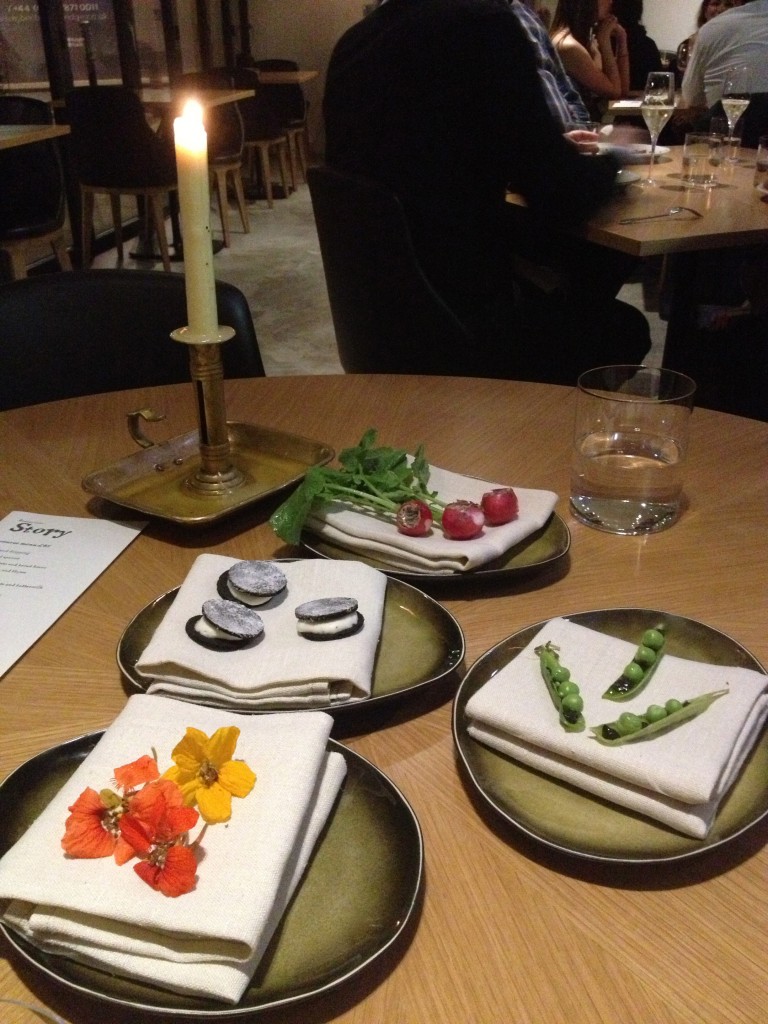 Just as we dived our spoons into our second desert a wild lady burst into the restaurant shouting, upset on the kitchen stuff, or at least she appeared to be in her outburst of craziness. Calling police from her portable phone and communicating with herself in an accent so different from a typical Londoner that we could not make a clear sentence out of her monologue! Most of the staff was hiding at the back and the only person who said something, but not much, to the intruder was the sommelier standing by a table she chose to make her own for the moment. Luckily the women did not pointed a gun at us after searching hastily in her back from something … that (sigh) showed to be an innocent mobile phone. Surprisingly, the young staff did not handle the situation up to professional standards, which was disappointing and shocking at the same time. It was about 11 pm and they should have either immediately called police or take the woman out of the restaurant, before half of the guests made quaintly their way out through the back door.
The story ended up safe for us. I am just not sure about our stomachs that through that shock and digestive process of multiple-courses at the same time, must have had quite some stressful time! 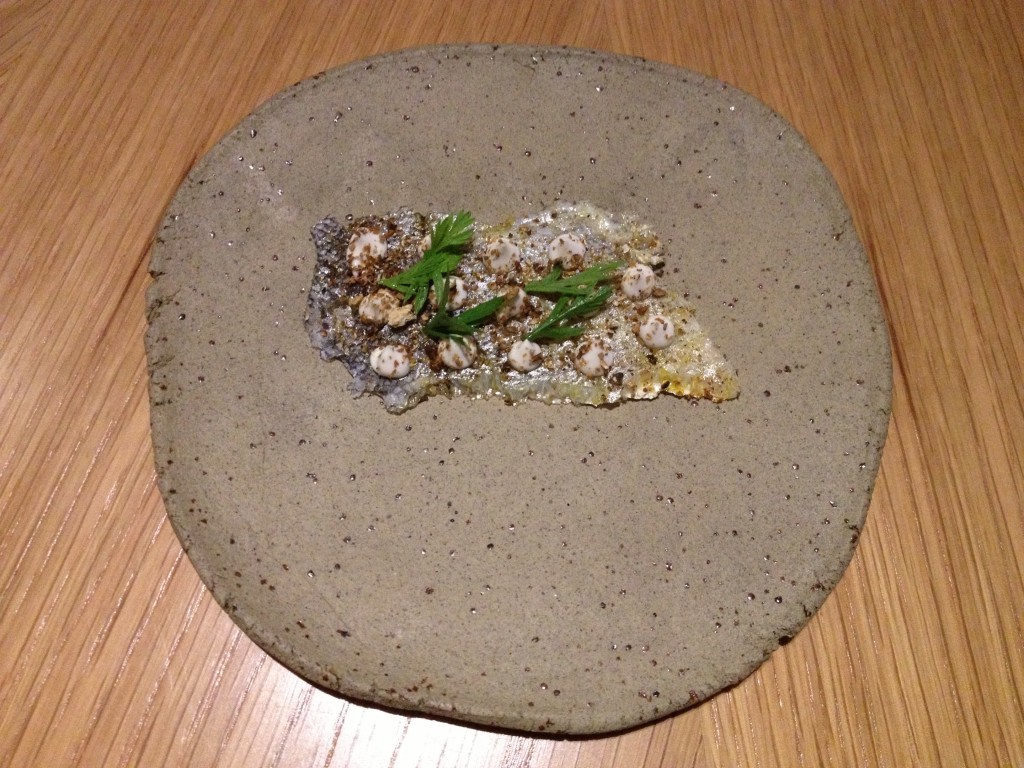 Food: Intriguing, can be awkward, reminding you of your granny’s cooking with its rewarding rich flavours, yet it is innovative and simply different. The first thing that came into our mouths was a small tapa of crispy cod skin with dollops of smoked fish mousse. An awkward and quite dry start.
Then came more fun hidden behind an innocent term “Bread and dripping“. As the waiter lit a candle made of beef fat, it started quite quickly drip into a small container under it. Now we were advised to dip in the slivers of dark ash bread served with it. Needless to add – we were hesitant and did not know whether it is time to be a bit adventurous right now with this weird food stuff or rather run around naked shouting “apocalypse!”. Favouring our inner adventure we dipped in, … and it tasted weird. Well once was enough for me, while my fiancée tried to “savour” it two to three times. Now he is describing as “rich and strong, really not kind of my thing“. With the bread also came a bowl of diced veal with apple, which was more palatable for a woman of a delicate nature. There were some other dishes in this acquired and highly individual arena of taste. Not the Nasturtium flowers filled with oyster emulsion, that were exquisite, while unusual. Buns (not bunnies!) of fried rabbit sandwiches with a tarragon emulsion covered by sliced carrot were rich, but more normal for British table standards. The “Oreo Cookies” (perhaps chef’s reminiscence of his stay in the US) were not sweet, but savoury tender biscuits squeezing in between a fresh and creamy filling. The best a mouse-bouche were Pea husks with truffle foam. Freshness of the green peas married harmoniously with the rich truffle aromas. 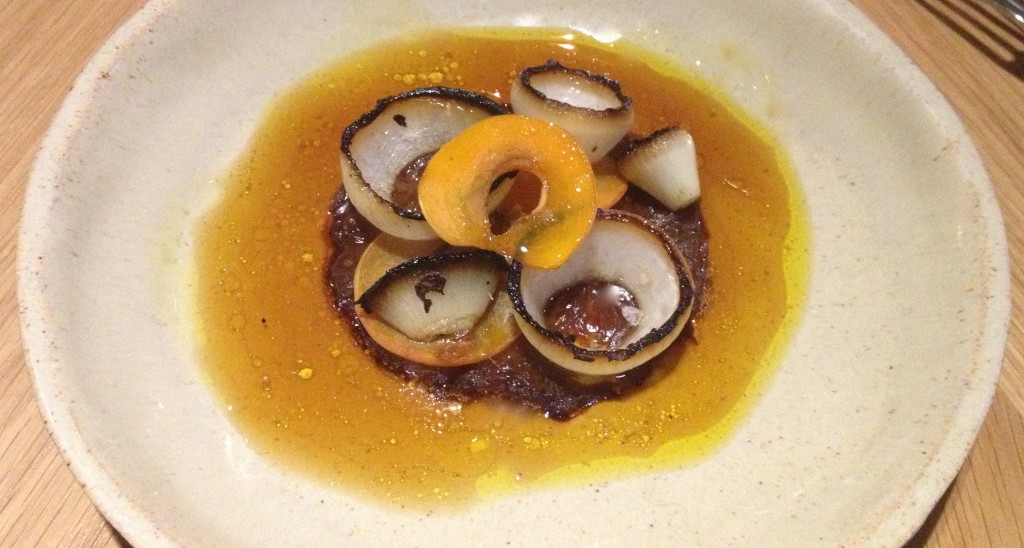 We went for the six-course tasting menu. So after the medieval bread style, more country cooking emerged. “Onion and apricot” as written on the menu sounds simple, while not exactly fitting. Who would eat onion with apricot? Well, that is exactly the admirable skill of the chef – bringing together ingredients that do not seem to work together and making them taste surprisingly good together. Stewed red onions with grilled white onion rings in rich apricot-based juice, reminded me most of my grandmother’s gravy with duck. While not exactly the same the effect was rewarding with intense and satisfying flavours. 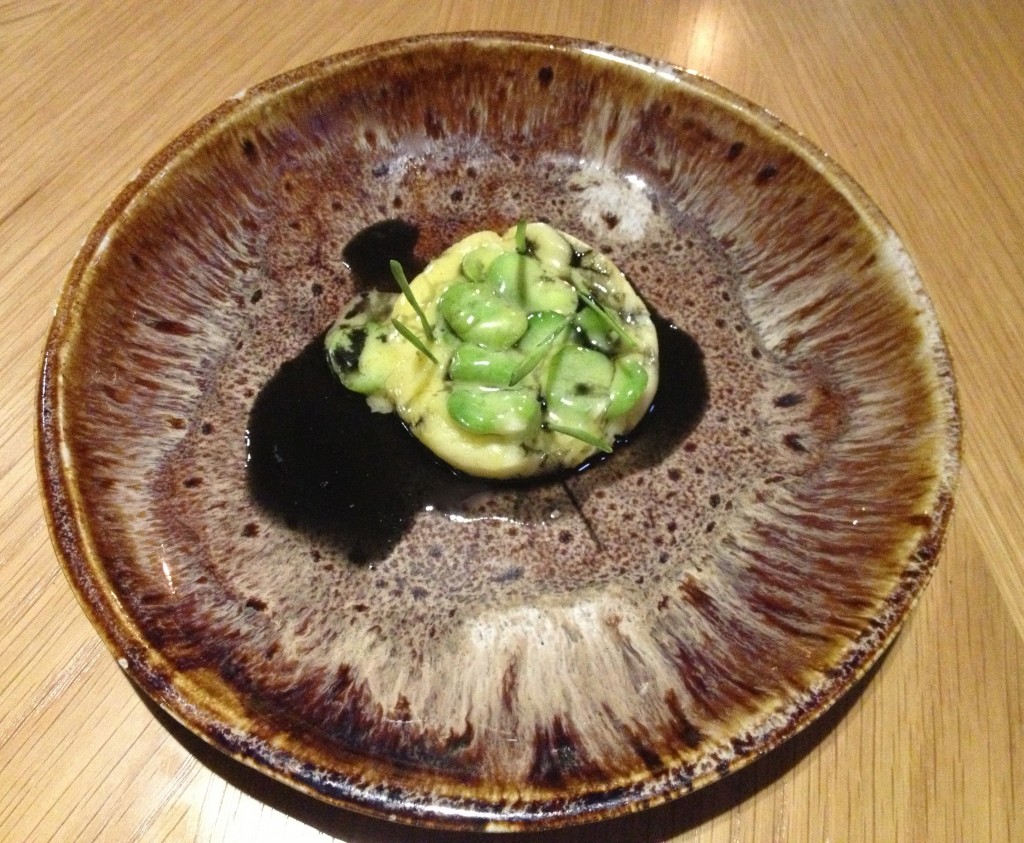 Next came a bit lighter mashed “Heritage potato and broad beans”, also resembling a humble weeknight dinner in a countryside house. It was yummy, mouth-filling and generous.
My favourite savoury plate was the “Veal, apple, peas and thyme”. As tender as the meat was, the peas with their shoots added intriguing refreshing texture. This was the only dish I wished it came in a bigger size. My knife sliced softly through the small morsel of veal, dipping the bit into the juice, enveloping it with a pea shoot and crowning with one of the tiny yellow pine berries (Noma’s foraging influence) turned into a pure hedonistic joy. This was my dish and I wanted more of it. 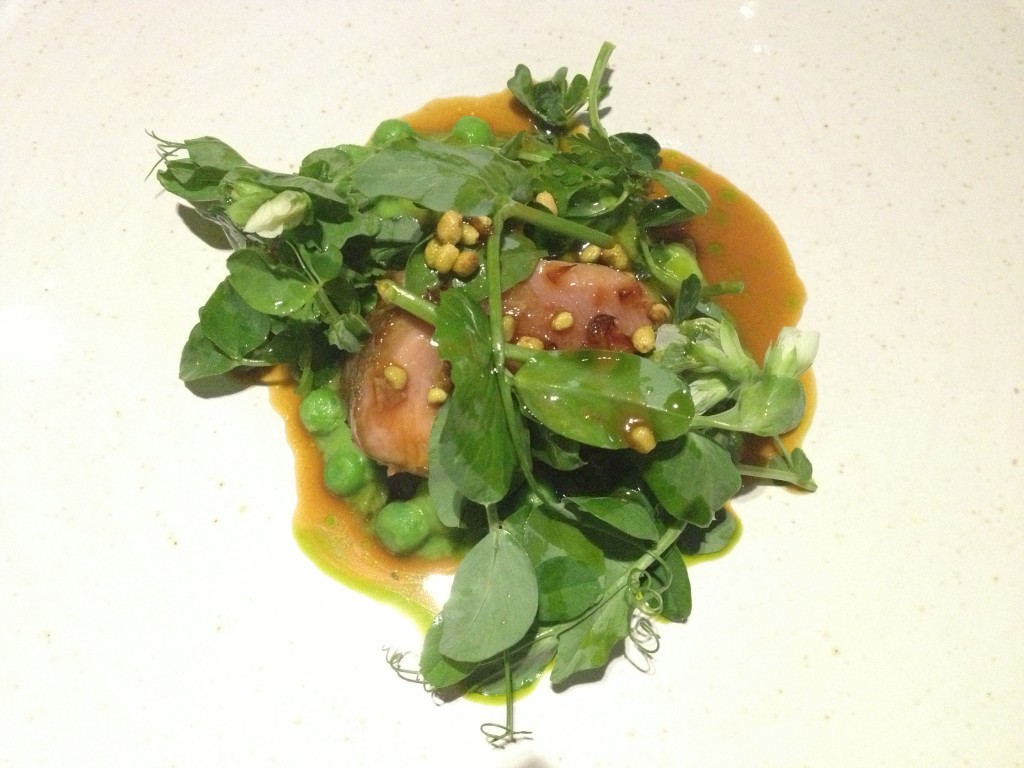 Before I called the compliance line, dissatisfied with the portion of my favourite dish on the tasting menu, I was silenced once more by the slightly sweet “Almond and dill“. Incredible combination of impossible flavours! Green dill sherbet with milky almond ice cream, frozen almond powder sprinkled with flower petals – hard to explain, but it works and how deliciously! Balanced, deep while refreshing and tasting like nothing else I have ever had before. I call it culinary art with taste in its mind. 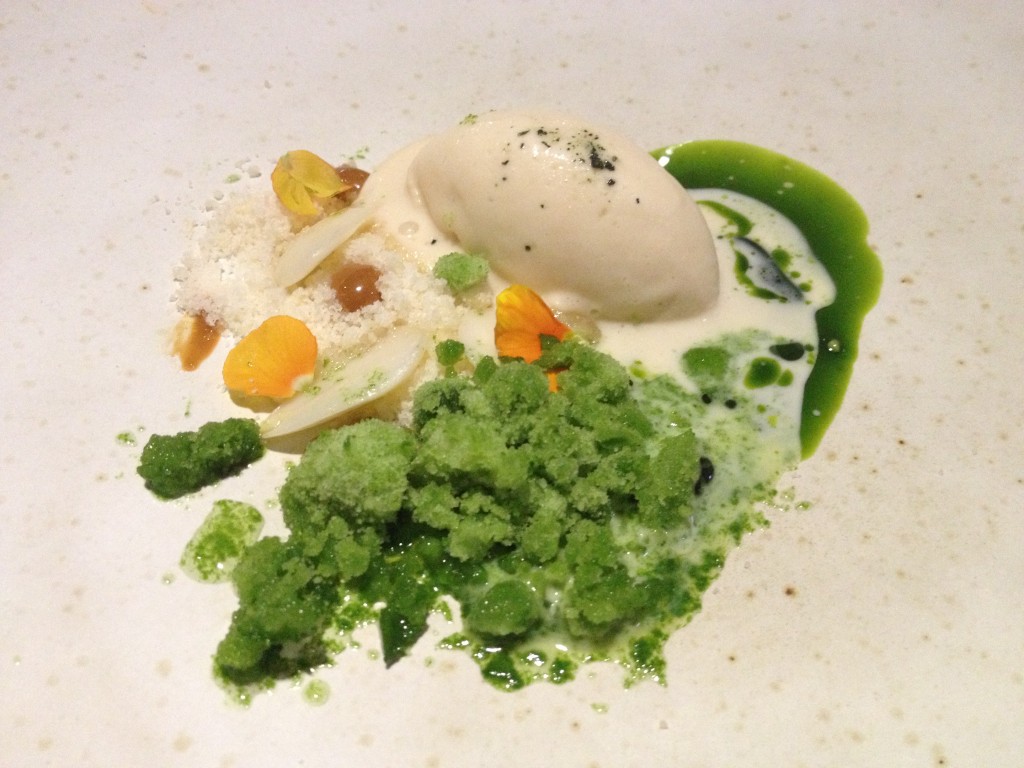 A dessert number two arrived in the form of “Wild berries, chocolate and buttermilk“. Currant sorbet with shavings and a powder of cocoa drizzled with frozen buttermilk concluded the tasting with recharging fanfare. I do not know if one could go straight to bed after all this sugar and energy from cocoa (I had to have more wine at my hotel before I was able to transfer myself to bed), but it tastes good, while not heavy. 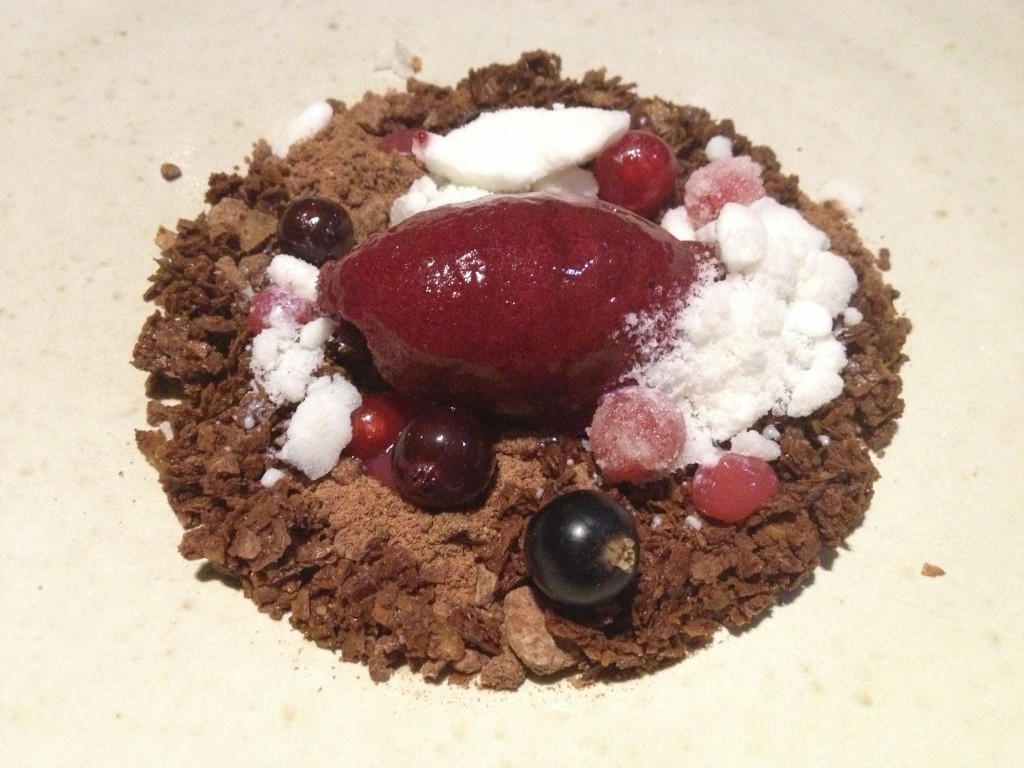 Drinks: After all that food and desserts one would not expect anything more, but one of the chef’s favourites, the Rhubarb and custard cream soda, served in a school milk bottle with a straw, arrived   just before we were about to leave. It is basically a liquid dessert bringing you back into your school years.
I am more of a wine buff, so I was enchanted by the sommeliers selection of wines-by-the glass, mostly less-known and some untypical. Starting with a British fizz I went for a dry Gusborne Brut ‘Blanc de Blanc’, 2009. It was refreshing but not very interesting. My next glass was much better.
Wines from Jura in France often have a hint of oxidative nuttiness, but the Julien Labet, ‘Fleur de Savagnin en Chalasse’ Jura 2011, although being the most expensive white wine-by-the glass on the list (£15 for 175ml-a generous size), it was complex fruity while mineral and with a very long tail.

From the reads the ‘Intellego Red’, Swartland, South Africa, 2011, demonstrated that even African wines can be elegant while keeping some of its punchiness.
The best find was a glass of Australian red from Shobbrook Wines, ‘Ebenezer Mourvedre’ Barossa 2011, that reminded us of a well-matured Bordeaux, rather than a New World bunch of fruits.
The list offers a wide selection of small grower champagnes alongside the bigger names in the sparkling world. The list is really showing the passion of the young sommelier and the chef for new and unusual wines, while offering its clientele also the old classics like Burgundy, Bordeaux, Chateauneuf du Pape and its siblings.