The picture above tells it all: the focused gaze of the Kichisen’s master chef Yoshimi Tanigawa shows how much honesty goes into his food and how much he cares to ennoble each customer’s delight from it. Tanigawa’s studies of traditional Japanese cultural arts such as tea ceremony, flower arrangement, incense ceremony, calligraphy, poetry and others widened his perspective on gastronomy as he incorporates all these elements at Kichisen. 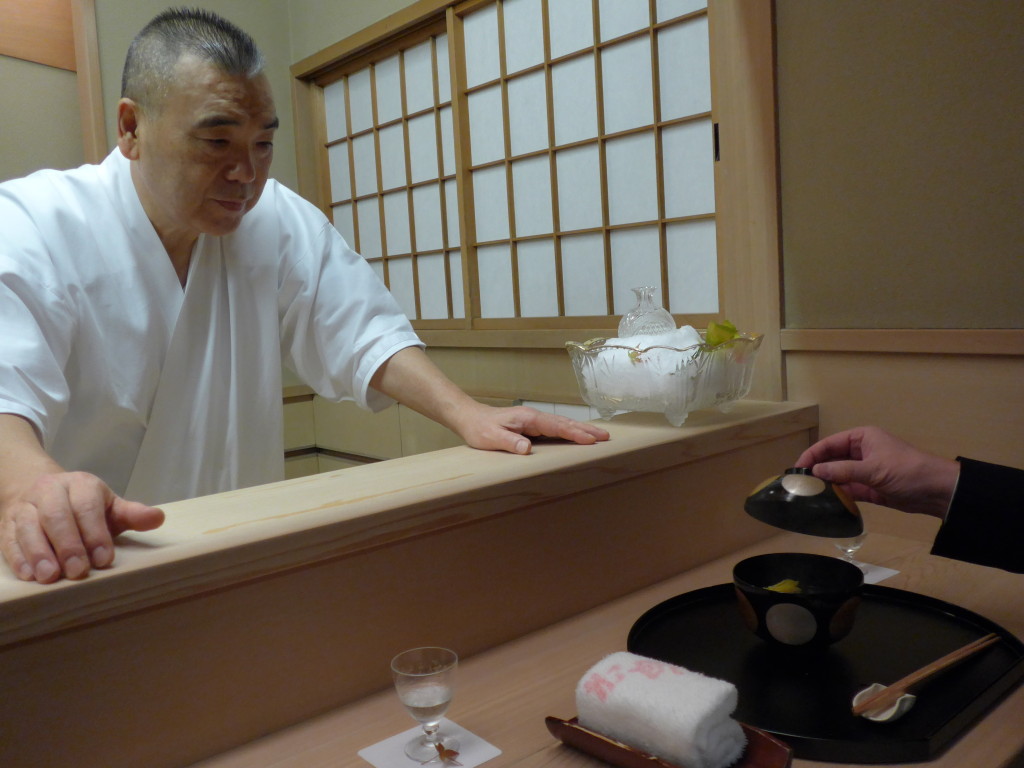 The chef participated in 1999 in a TV program ‘Ryori-no-tetsujin‘ (Iron Chef) defeating another Japanese master chef Masaharu Morimoto and his culinary star has been shining ever since. 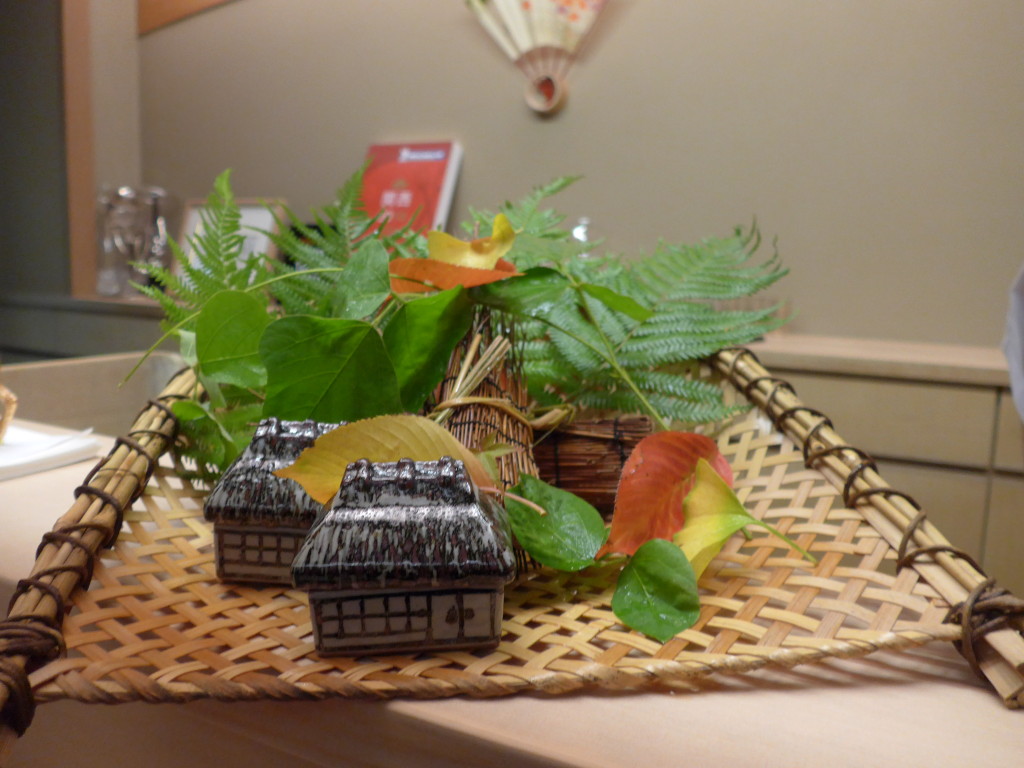 Cuisine: Japanese kaiseki [Kyoto cuisine is a mix of imperial court cuisine (yūsoku-ryōri), samurai cuisine (honzen-ryōri), Buddhist temple cuisine (shōjin-ryōri), and tea ceremony cuisine (cha-kaiseki)].
Kaiseki was originally a set of small dishes served during the tea ceremony that was perfected in Kyoto by buddhist monks centuries ago.
Visit: November 2o13
Price: Very high (Three Michelin stars themselves do not justify an expensive restaurant, but superb ingredients, mastery of cooking and pleasant atmosphere do). Lunch starts at ¥8,000, dinner at ¥14,000. 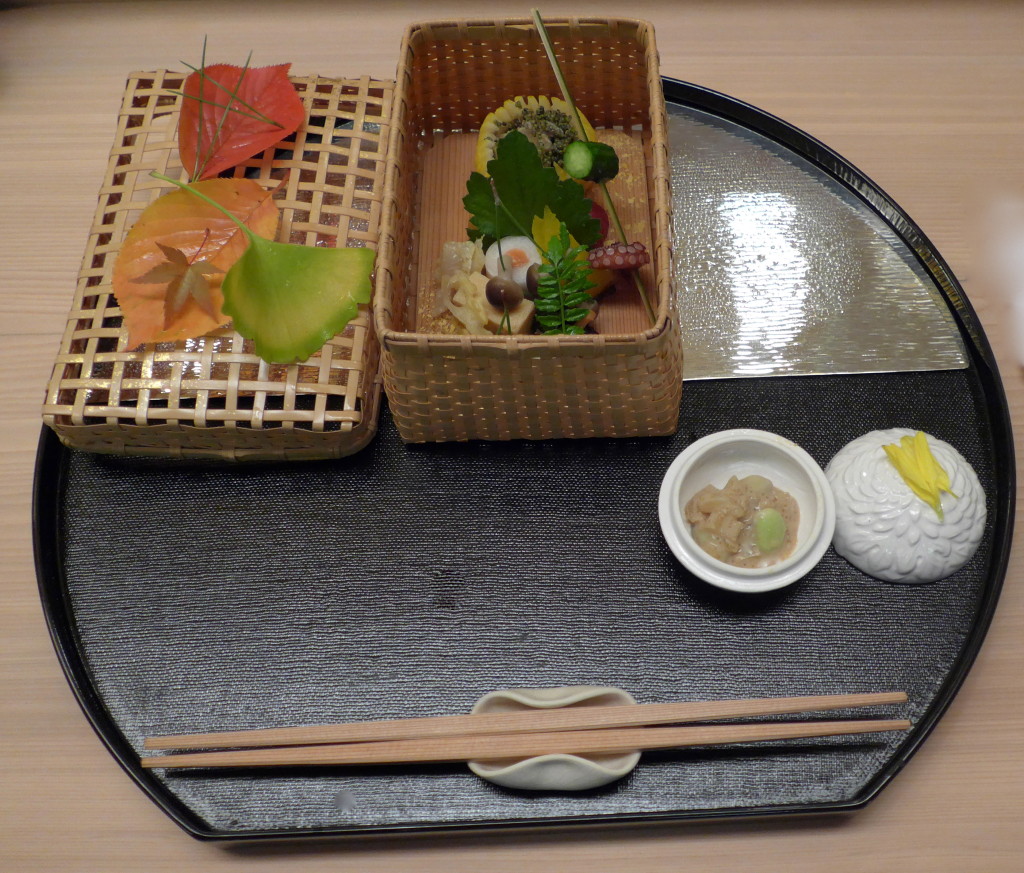 Atmosphere: It is quiet, almost monastic inside every room in the house. After a warm welcome you will be taken inside, take off your shoes and will be given slippers. You might sit down in tatami mats covered room or alongside a wooden counter in Kai-no-ma room. There is also a special room for the tea ceremony (Suisho-an room), but that has to be specifically booked ahead. Located in the vicinity of Shimogamo-jinja Shrine, a UNESCO site, and the millenia-old forest of Tadasu-no-mori enriches the natural traditional ambiance. 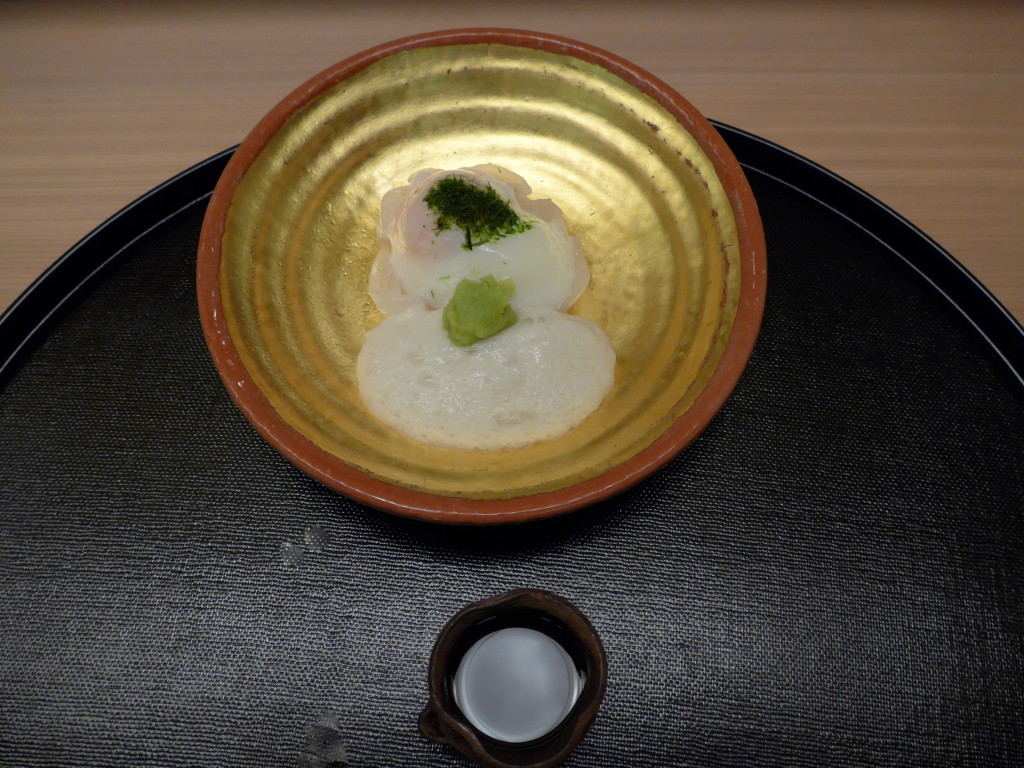 Food: An art form rather than a simple meal to sate one’s appetite. Each course is unique in taste but also in presentation including the utensils. As is characteristic of Kyoto cuisine, seasonal ingredients stay in the forefront. Reverence of tradition, triumph of ingredients while striving for new forms of presentation characterise Kichisen’s spirit of ‘discovering new things by studying the past’.
Nature unveils itself in front of you in the “sakizuke,” which serves as an appetizer before the meal. Seafood, pickled vegetables and mushrooms were laid out like a foraging bonanza in a straw basket decorated by colourful local autumn leafs. Following clear soup called “o-wan” prepared our bellies for the real meal. Then came  “mukōzuke” a sashimi (raw fish) often changed daily according to best possible quality available and served with a wide variety of seasonal condiments. 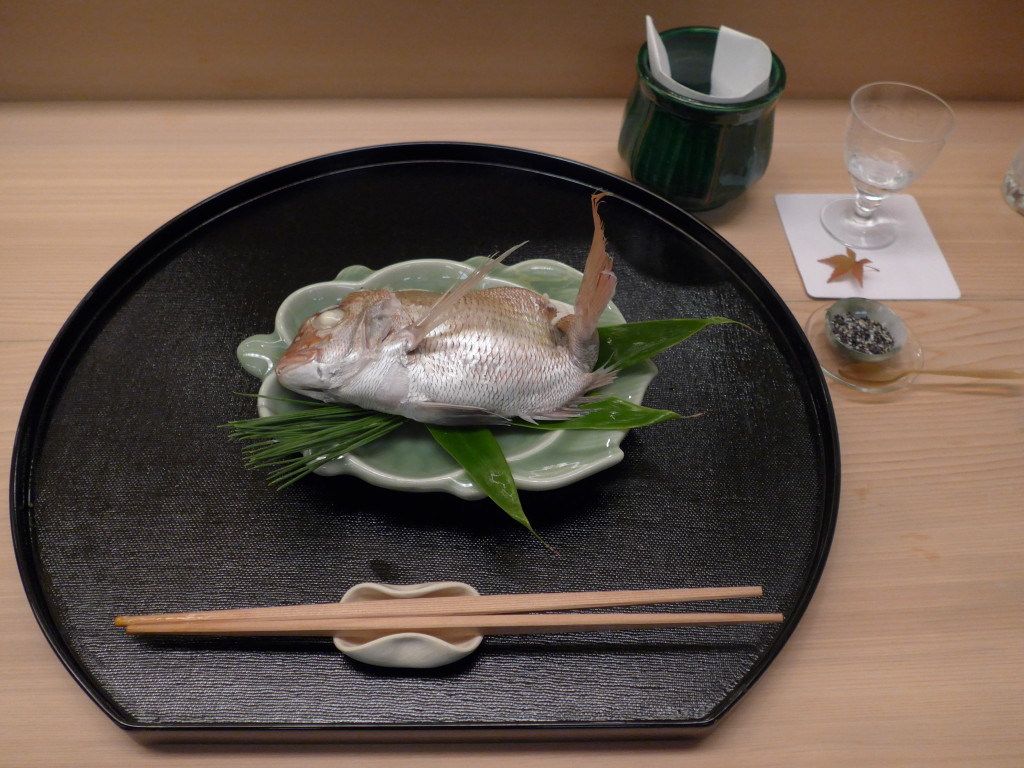 The soggy material in a gold-painted bowl might look weird, but this is one of the chef’s signature dishes – the runny egg à la Kichisen. Sprinkled with diced seaweed, an airy foam and a morsel of freshly grated wasabi this was the only think I could not finish for its particular gooey texture that I never relished in eggs.
“Nakazara” (middle dish) was more simple but also simply delicious as the whole ‘nemo’ steamed fish stared at me from the plate. The white meat was infused with fragrant japanese condiments and softly dissolved in my mouth with a sip of saké. 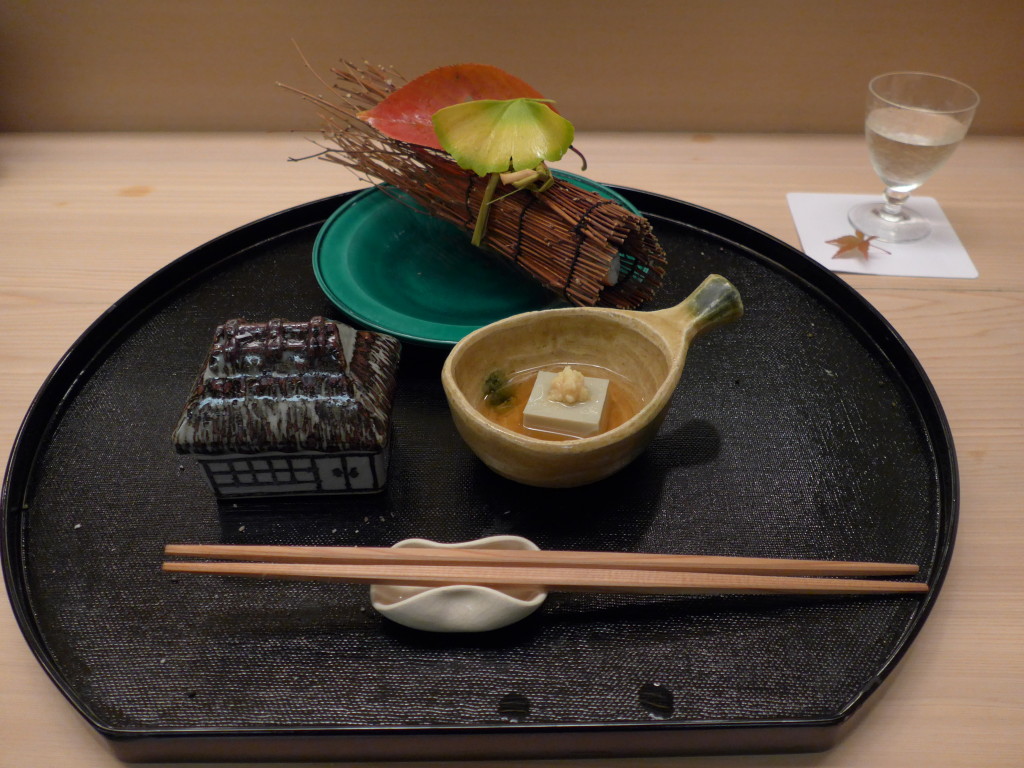 More art on the plate came in “hassun,” a mixed platter of tastes from both the mountains and the sea. The sea catch of boiled crab legs was enveloped in a thin wooden wrap, while the mushrooms from the mountains were hiding inside the beautifully painted ceramic house. I bet that children would enjoy eating anything served in this fairy manner. 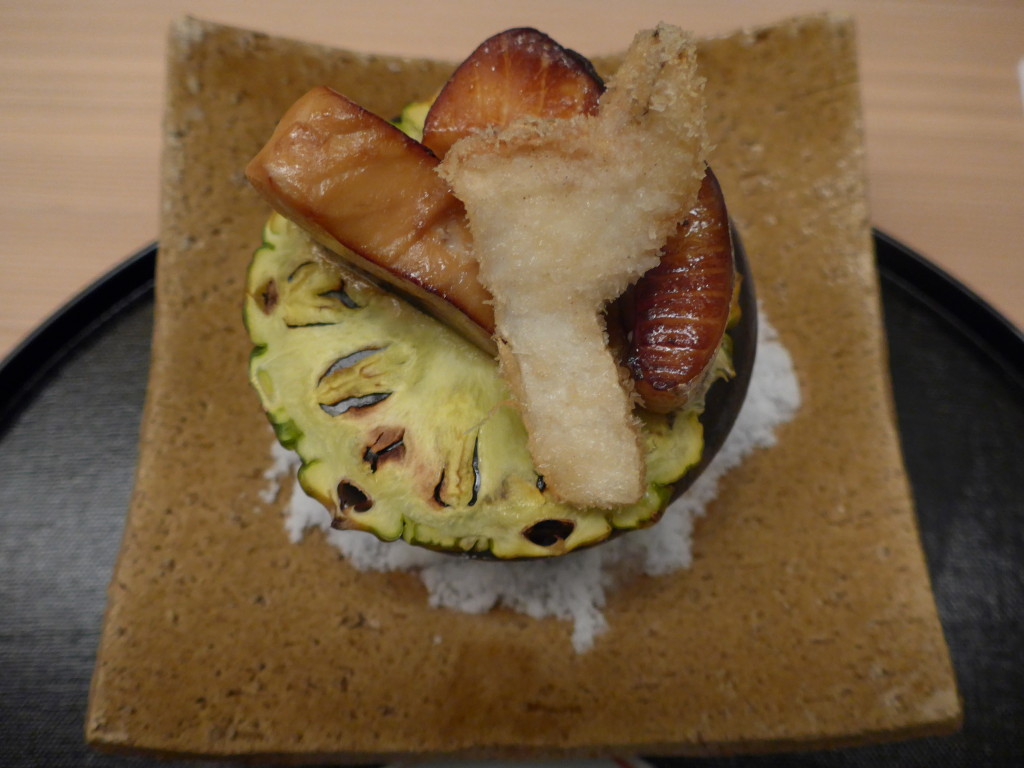 A “nimono” (boiled) soup-like dish arrived with radish and wasabi topping, followed by a “yakimono” (grilled) dish, which was my absolute favourite. I am biased to anything pineapple so I need to confess here though. The grilled thin slice of pineapple was rather in the background though, underlining the delicate sweetness of the fish and balancing the oily nature of the mushroom tempura. 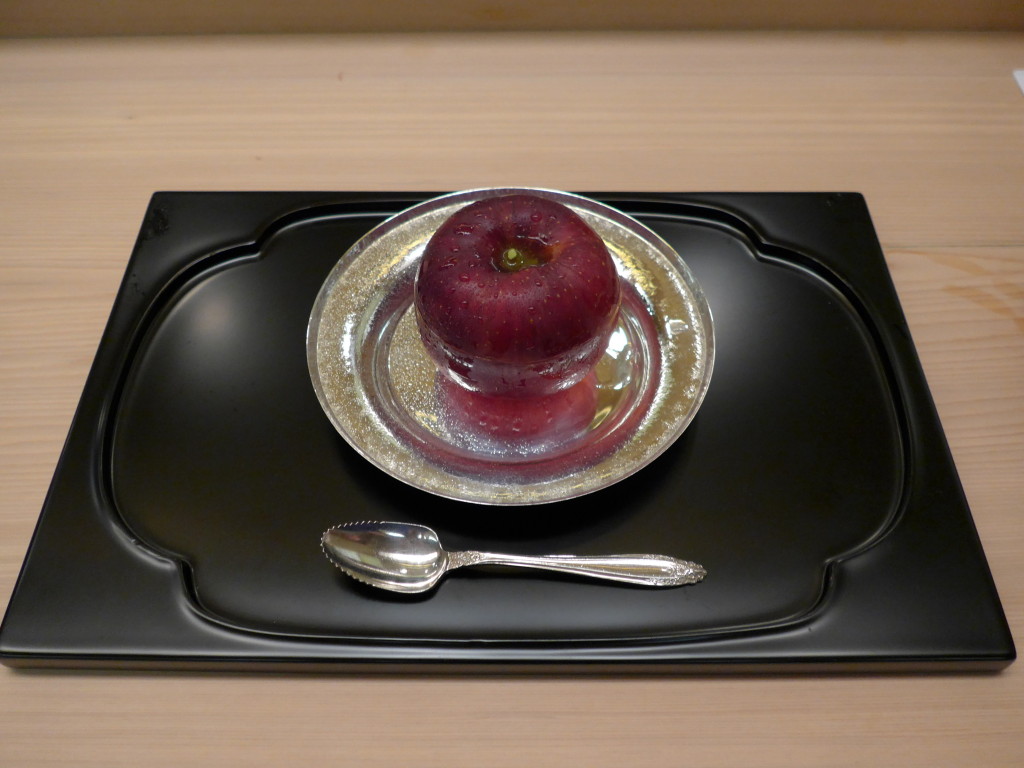 The palate cleanser ( “kuchi-naoshi”) in the form of chilled pumpkin soup was refreshing. Later we were presented the deserts announced by an exquisite  devil-red iced apple with its sorbet mashed inside and refreshing chilled tomatoes so light and crisp like an autumn breeze in the gardens of Kyoto. The real desert part is then small consisting of small delicate sweets balanced by powdered green tea to help with digestion. Balance achieved! 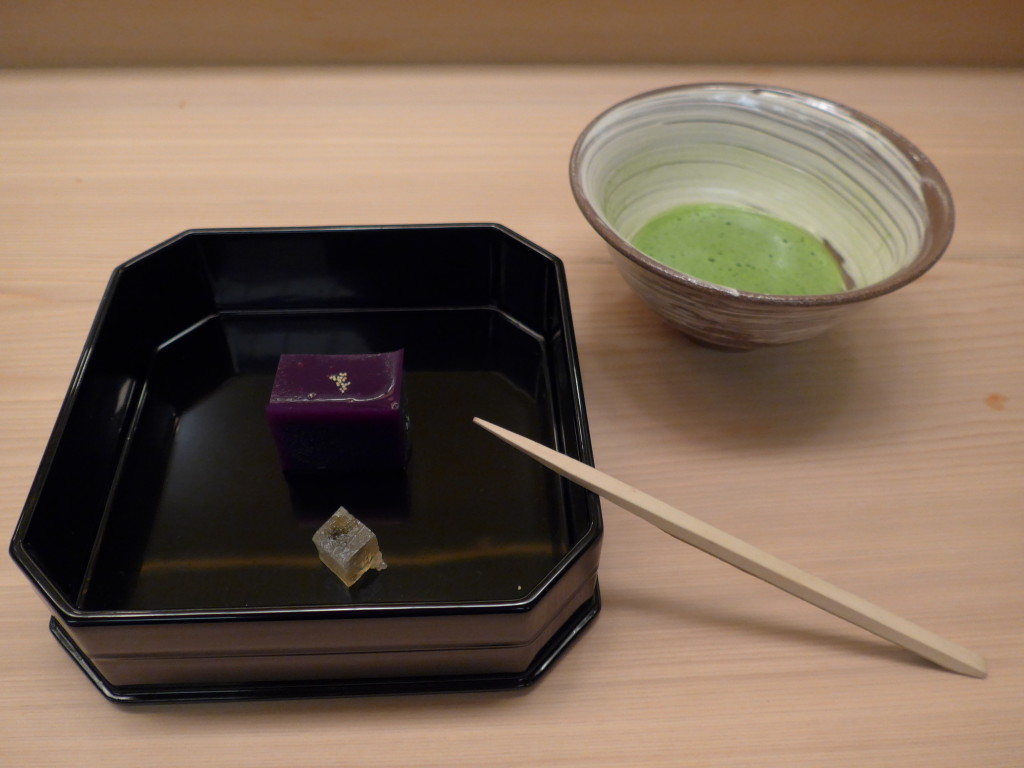 Drinks: The wine list is concise yet impressive with the giants of Lafite, La Tour, Petrus and Mouton Rothschild figuring on its pages next to the Domaine de la Romaine Conti’s Montrachet. All hideously expensive, so going for a bottle of saké is not only justifiable but advisable if you do not know what to do with your yens. 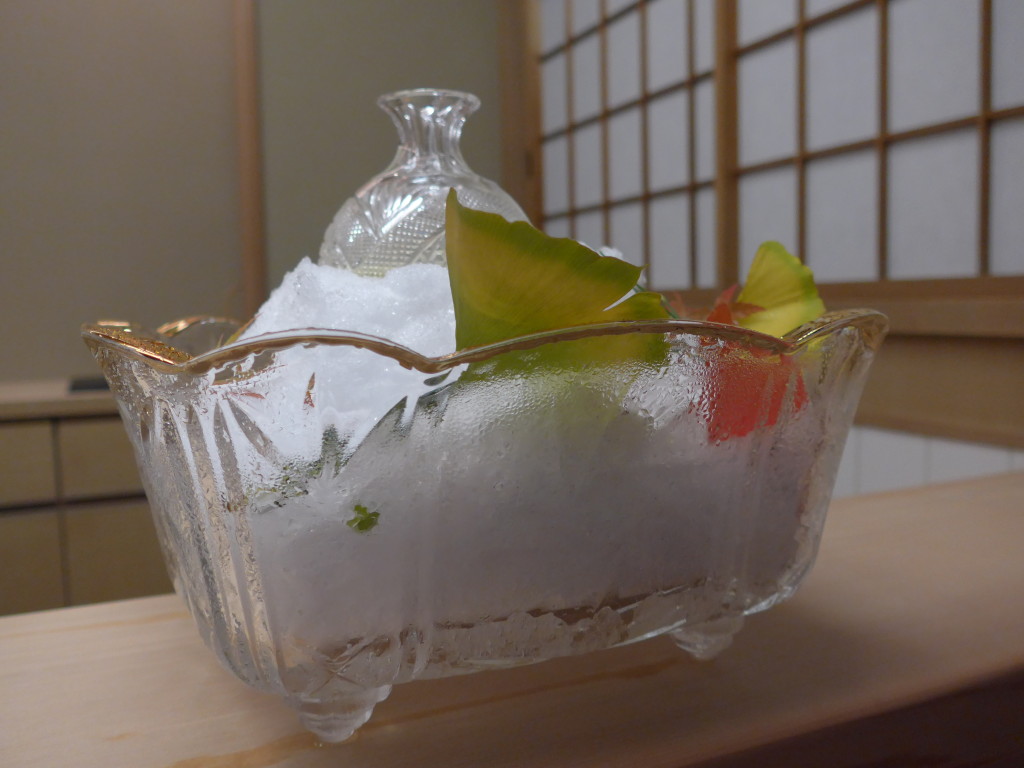 The pure and delicious sake is wonderfully presented in a crystal jar served on a mountain of soft ice to keep it cold. It works just perfectly with the kaiseki style of Kyoto food at Kichisen. 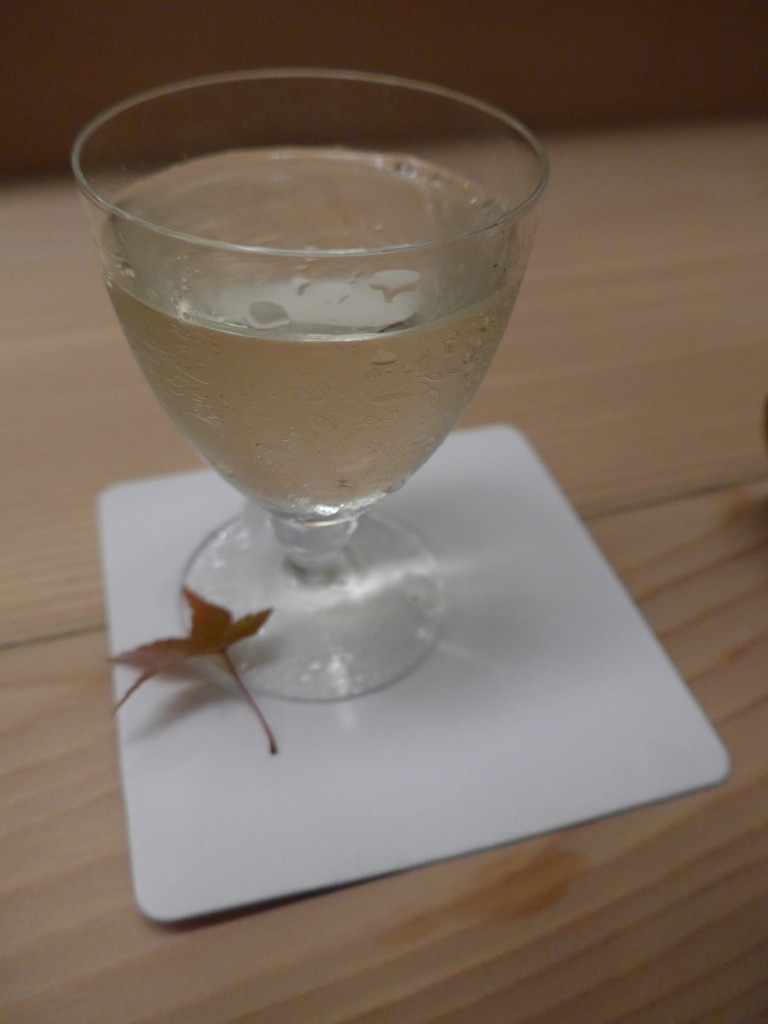 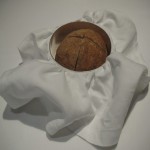 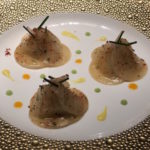 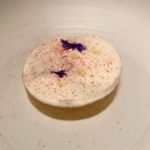 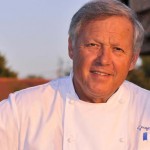