Unless you eat the tea leaves after steeping them in water, you will never get more strength and vigour from Camelia Sinensis than dwells in a bowl of powdered matcha.

Matcha is the essence of tea. The power of matcha, the stone mill ground fine Japanese green tea, is in its wholeness. Unless you eat the tea leaves after steeping them in water, you will never get more strength and vigour from Camelia Sinensis than dwells in a bowl of powdered tea. There are significant differences in quality though, and most importantly to yield maximum from the health properties there are some common mistakes made by the consumer as well as the producer and the brewing outlet. Starbucks and others mess with matcha so, unfortunately, there are not many antioxidants and the other beneficial substances otherwise present in this whole-leaf powdered tea left. Here I explain how to make it properly and what to look for when you buy freshly made matcha beverage to get most of this potent tea. 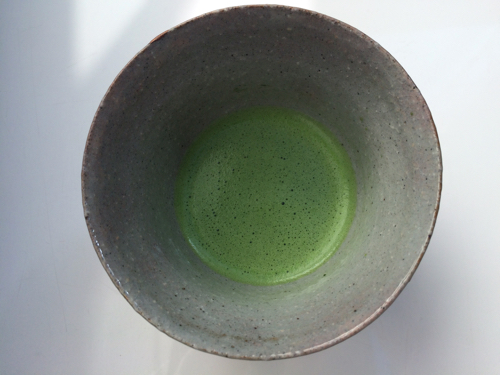 Although only recently matcha swooned over the Western world, powdered tea is nothing new and was not first made in Japan. As reported by Lu Yu, the author of the first book on tea, China, the birth country of tea had been grinding the bricks of raw, unripened green tea during the Tang Dynasty (AD 618-907) centuries before the custom developed in Japan. During the Song dynasty using a bamboo whisk to whip frothy tea became popular. Nevertheless, the Japanese fine tuned the milling process and the preparation of the powdered green tea. 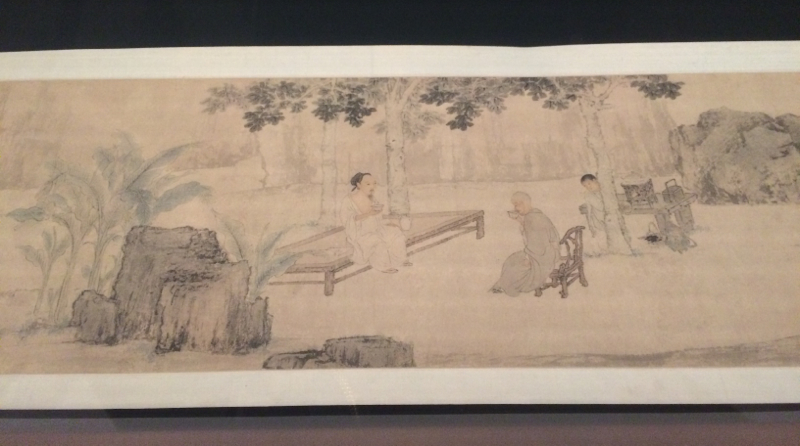 In Japan, like with gyokuro, the tea plants designated for matcha are shaded by bamboo screens during the last three weeks before the harvest (tencha style tea) so the chlorophyl and more amino acids accumulate in the leaves.
Matcha’s alleged health effects are praised by the marketers, and there is well-researched science behind some of them. The “focused and sustained energy” that most of the matcha drinkers report is due to gradual release of caffeine in it. The catechins (phytochemicals of the flavanol type) in tea tame the caffeine’s jittery outbursts typical for coffee consumption so the caffeine is metabolised slowly. There is about four to five times less caffeine in the same amount of matcha when compared with coffee (espresso). Green tea contains many beneficial minerals (calcium, copper, fluoride, iodine, manganese, phosphorus) and vitamins (B, C, P, K, PP), but in terms of significant amounts beneficial to our health, the phytochemicals are present in larger proportions in matcha than in steeped green tea. Due to its particular processing green tea and matcha in even higher concentration contains more aminoacids (L-Theanine), fibre, calcium, iron, potassium but also caffeine (about twice as much in 2g serving of matcha than is in a cup of regular green tea). Forget your matcha latte, or at least adding dairy milk into your green tea since [dairy] “milk can block the metabolic absorption of many nutritional compounds in the matcha tea“. Green tea reduces the amount of blood sugar, and for this effect it is reputed to aid weight-loss. As the youthful appearance of the Japanese seems to proof, the antioxidants in green tea slow the ageing process. Sounds like a magic supplement, doesn’t it? 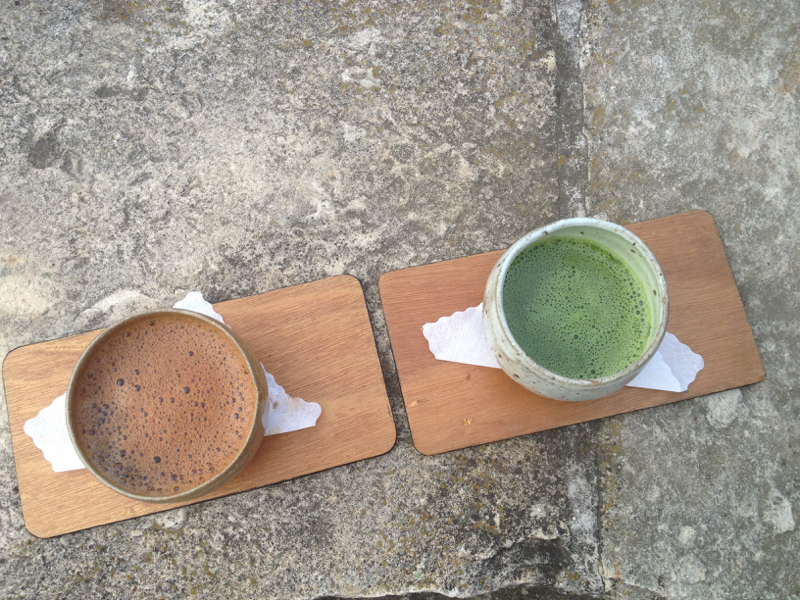 Known as the tea (“o-cha” in Japanese) style of choice for the Japanese tea ceremony, the traditional kaiseki meal and flavouring the countless desserts in Japan, matcha has an important and versatile traditional role in the islands’ national culture. Recently, the West has embraced the spring green charms of matcha. Sadly, the quality with the increased demand is declining. Japan cannot produce an unlimited amount of high-grade organic matcha that was traditionally hand-picked and stone ground.
There are different grades of matcha. The ceremonial grade from Uji is the highest. The most respected Buddhist monks and tea masters choose their favourite matcha, and then the blessed manufacturers of such distinct tea can announce this quality reassuring approval on their label. Unfortunately, as with most of the highly craved Japanese produce, it is usually all written in Japanese. Also, the fresher the harvest the better the quality. Therefore, ideally buy matcha from the latest vintage. The best quality fresh matcha is released in spring, usually around April. The colour of the powder must be as bright, almost neon green, as in the image from the matcha factory bellow. 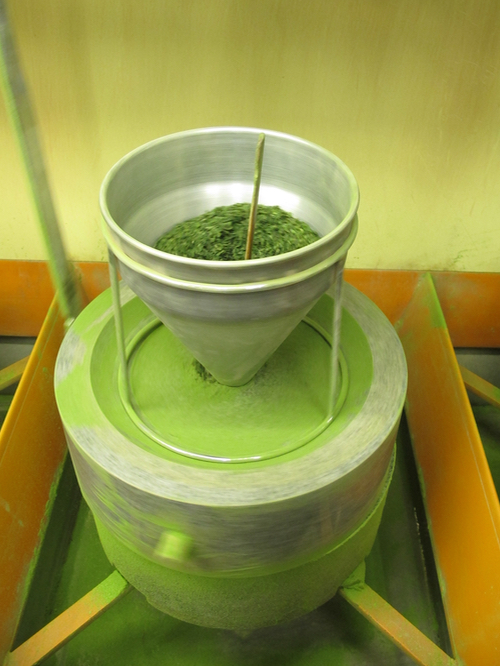 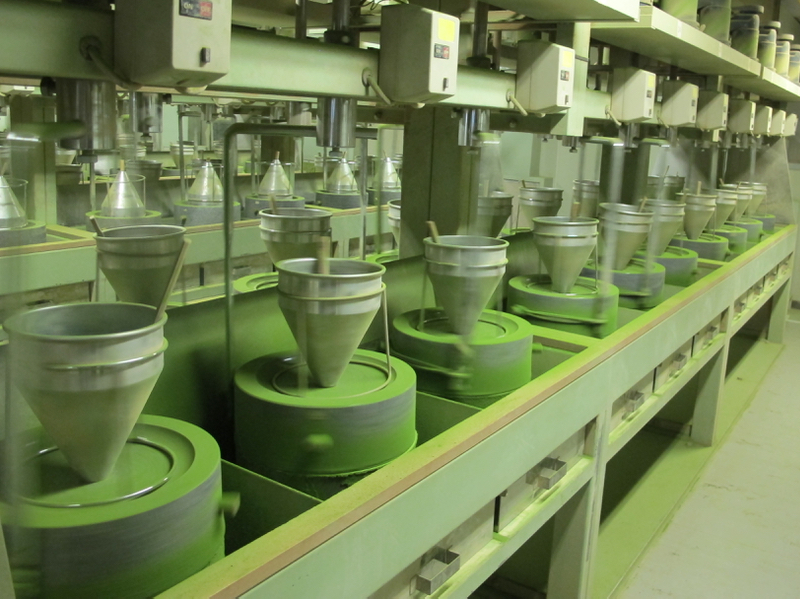 The food grade matcha is the lowest, still pure matcha, that is best used in baking, in sauces and to flavor tofu, mochi, ice cream and cakes. This matcha is often used in those take-away lattes that you get and won’t whisk in the perfectly frothy beverage that you are after. Fillers or using low quality green tea from elsewhere that is artificially coloured sadly occur.

How matcha is made

As I witnessed during a visit to a matcha manufactory in the Uji region, powdering tea is not a romantic process as the drinking of matcha in ceremonial setting might suggest. In modern settings, stone mills run simultaneously on electricity, grinding steadily supplied fresh green tea leaves dropping from a conic metal feeder. Despite the see-through screens, the matcha dust sets everywhere, so if you enter the rooms where matcha is made, you must wear special protective clothes and shoes so you do not contaminate the product (and honestly who wants to look like a frog man?). As soon as possible, the powder is transferred into humidity and light proof containers that are hermetically sealed so its freshness is preserved for the consumer for the longest possible period.
Seeking a reputed tea purveyor is essential. From the tea brands found in the West, I can recommend Ippodo in Japan and New York (also Single Origin small batch powders by Matchaful on Manhattan), Marriage Fréres and Jugetsudo in France, My Cup of Tea and Postcard Teas in London, Tea Mountain in Prague, but there are other boutique teas shops as good as my choices.

In such preserved tea, you get the best quality. Once you open the seal, consume the matcha inside within weeks. Top quality matcha is sold in tiny containers precisely for this reason, so forget abut any XL deals you find in supermarkets and low grade tea shops. Humidity and light are tea’s biggest foes. Buying from reputed sellers is as adamant as when buying pu-erh in China. Counterfeiting is rife. 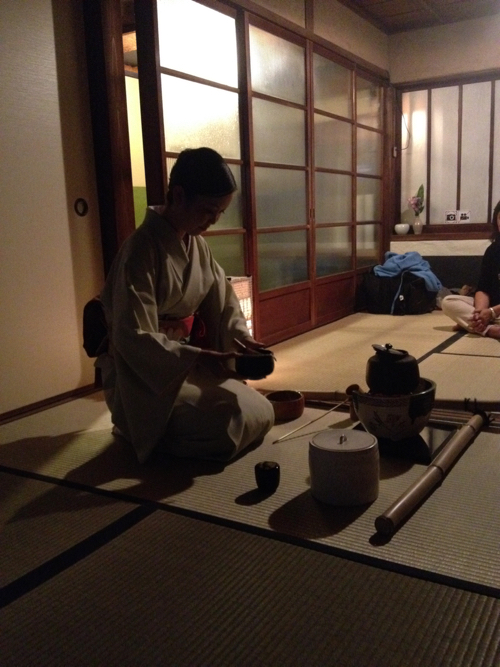 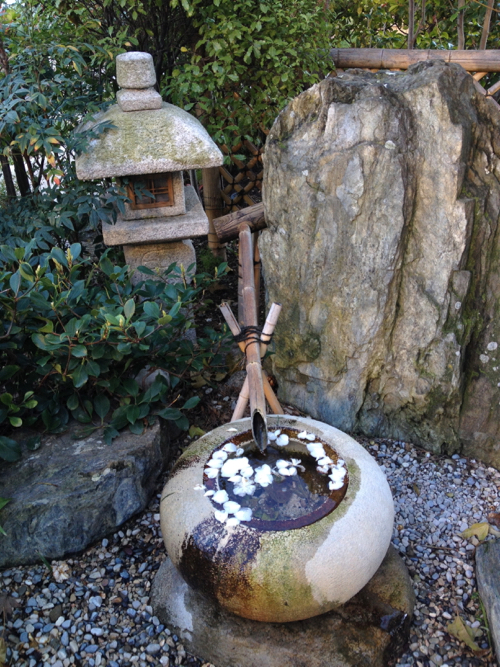 Preparing matcha: from a serious tea ceremony to mindful practice at home

All kinds of liquids played and continue to retain an important role in the religious rituals of diverse cultures. Like wine for Christians and the Jews, the Japanese tea ceremony used tea as the Buddhist monks’ tool to contemplation. For the ceremonial purposes the highest quality of tea of the Yame variety is commonly used. Yame is a Japanese farm town in Shizuoka province, that is historically tied to the tea ceremony. “Simplicity, humility and austerity” are the focus of traditional mindful tea gathering in Japan. Sen No Rikyu, was the most prominent tea master active during the 16th century, who is credited with the refinement of the Japanese tea ceremony. If you are interested then check my report on the ceremony by contemporary tea master that I witnessed. In Kyoto, there are three established tea schools that for a small fee demonstrate the lengthy process to visitors (also performed in English). This intimate experience is a must when traveling to Japan.
Every traditional kaiseki degustation meal ends with a bowl of matcha and a small sweet treat. During my first kaiseki meal in Kyoto I was intimidated by drinking caffeinated beverage late in the evening, but a sound sleep following each dinner relaxed my anxiety. 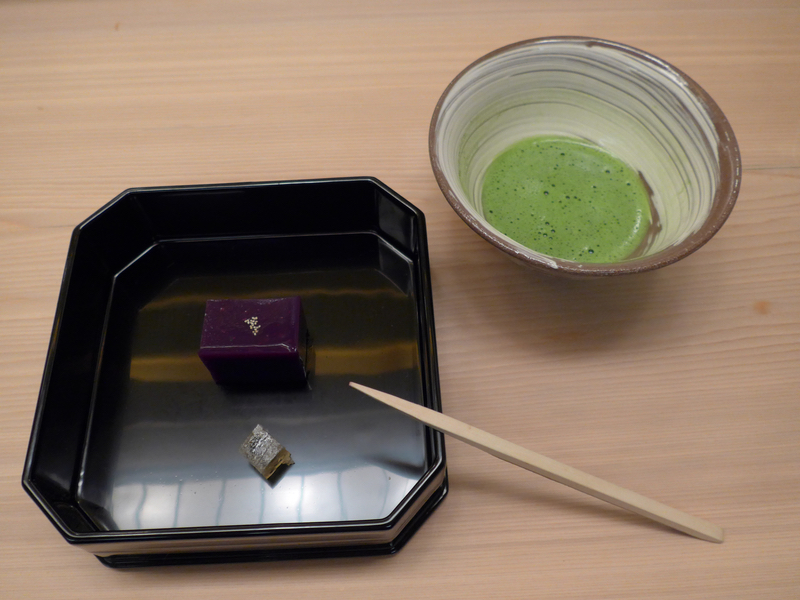 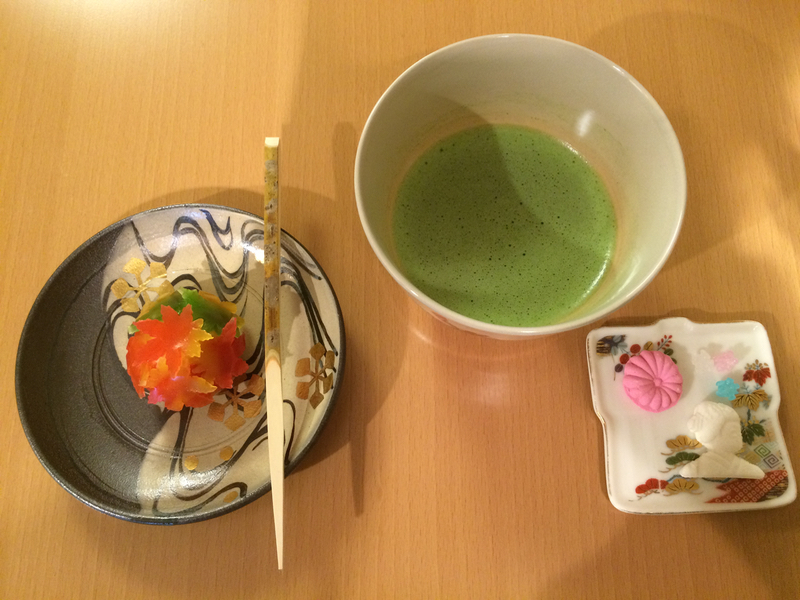 When making matcha at home you need: a bamboo whisk (chosen), a wide bowl with high edges unglazed inside (chasaku), bamboo tea scoop (furusato), optionally a fine-mesh strainer.
Warm the serving bowl with boiled hot water and pour it out just before adding the ladle or two of the matcha powder.

There are two styles of Kyoto matcha differing according the amount of water added to matcha. Koicha is “thick”and usucha “thin” tea. The thick tea is typical for Kyoto and about 50 ml of warm water (74-80C = 165-175 F) is mixed with about 4 grams of powder per bowl. The thin usucha is more typical with about 1.5-2 grams per bowl and 120ml of water, known also as chawan. Whisk vigorously in back and forth (not circular) motion until smooth foam forms. Finish whisking just on the surface to develop even more fine foam. Serve with the decoration or a mark on the bowl facing the guest. The video of the Michelin stared Japanese chef Nishikawa in Kyoto above shows how each traditional kaiseki meal is finished with a perfectly whisked bowl of matcha, it is a cultural as well as gastronomic tradition of the far eastern island nation. 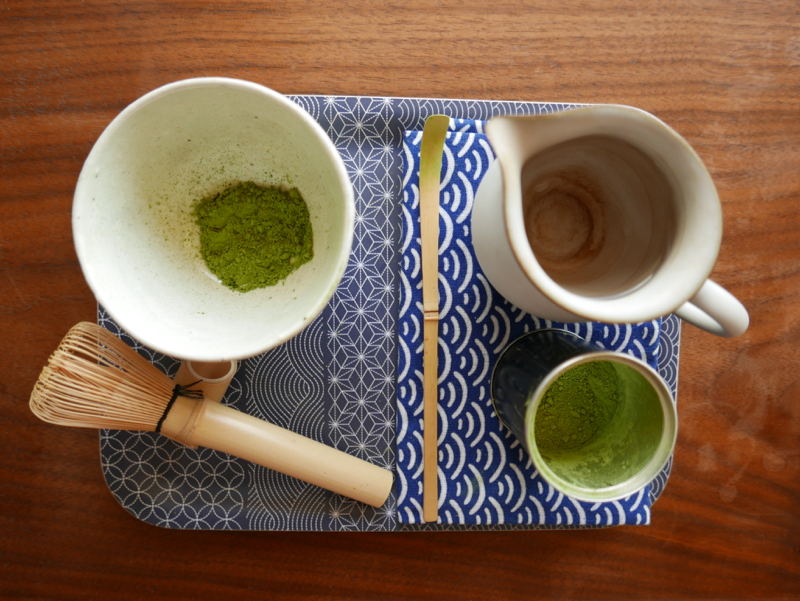 Modern consumerism ushered many on-the-go matcha products, from in a paper cup latte, through cakes and cookies to wine. Now even miraculous rejuvenating face masks containing this Japanese “magic” green powder have appeared. Whether you buy into it or not, like many consumers I love the delectable matcha creations in the ice cream at my Monaco artisan boutique, the Corsica-born Pierre Geronimi. The organic matcha cookies baked at Le Teashop as well as the very processed naughty matcha sticks sold at Japanese specialist grocers tap on my happy brain. The very popular matcha Kit Kat bars do not kick my eyeballs though. Nana’s Green Tea is a popular tea dessert bar in Japan and I do enjoy their liquid tea pleasures with whipped cream, ice cream, jellies or sweet adzuki beans hot or iced. 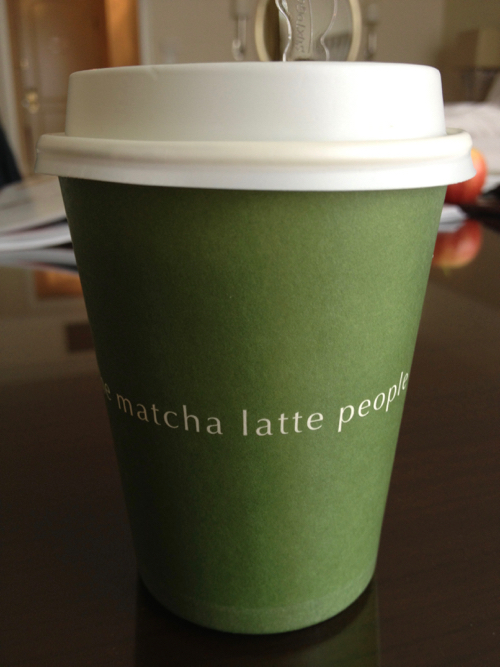 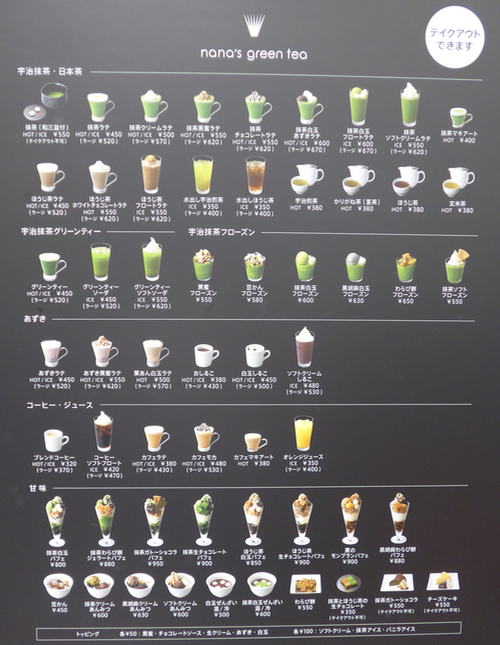 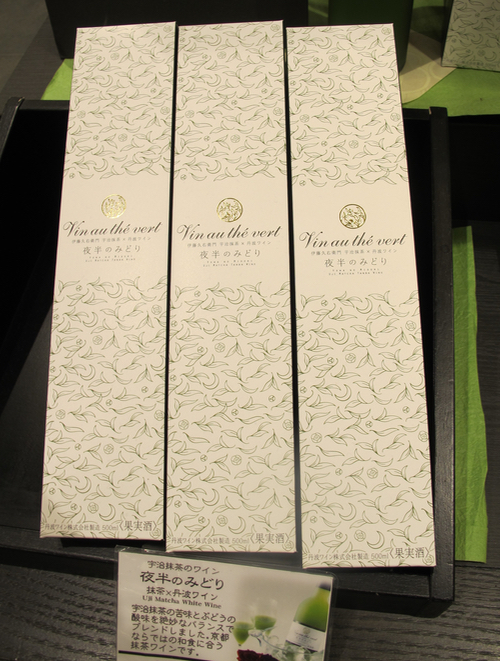 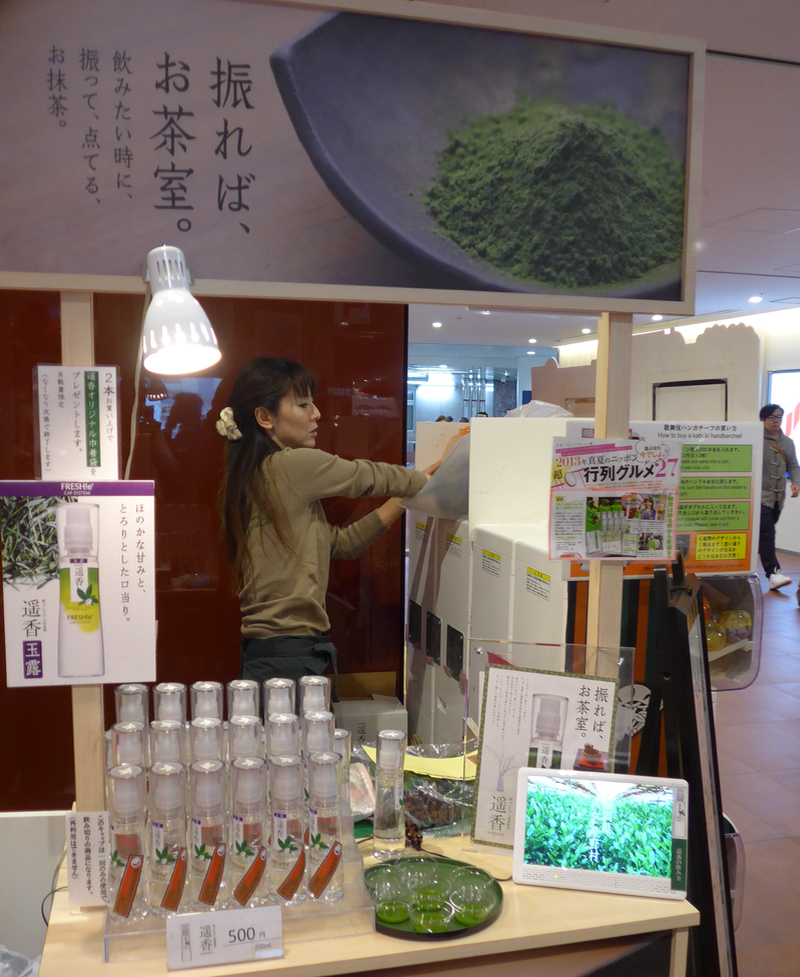 While it is ok to have tea on the go, matcha was not created for the mindless sipping while walking to your next meeting. Tea can do for you much more than supplying a gustatory pleasure and perhaps some health benefits. As I wrote in my recent musing What Tea Can Do For You, your mind can be calmed by the satisfying sense of awareness and so preparing the matcha yourself can enhance your everyday experience and contribute to happiness.