Din Tai Fung is a Taiwanese empress of xiaolongbao, the Chinese word for steamed soup dumplings.
For almost half a century, this Taiwan-bred eatery has been expanding its sizzling hot brand across the globe, stretching from its native Taipei to China, but also far away to Australia and North America.
The picture from Din Tai Fung’s menu in Shanghai below sums up its global rise as the dumpling empire. 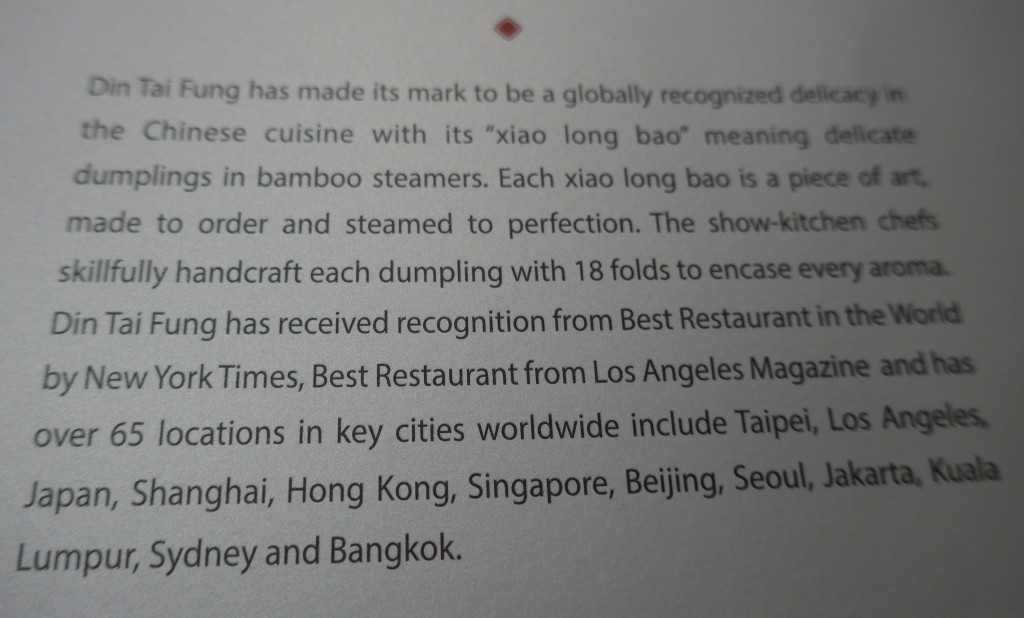 It took a long journey from only a humble shop in Taipei to being a Michelin-awarded restaurant. Now there are several locations around Taipei, but its maternal home on a busy thoroughfare remains the most popular. The long line of people waiting for their seating number to turn up on the digital screen is the prove of success. The turn over is impressive, and such superb organizational skills of the management and the efficiency of the cooks are rarely seen at any restaurant.
You can watch the perfection through a window into the busy kitchen turning around hundreds of diners every day. The food there is good, but as I dined at their multiple locations, still I like the Pudong branch in Shanghai the most for its most refined taste and also better drinks selection than the first Din Tai Fung in Taipei. 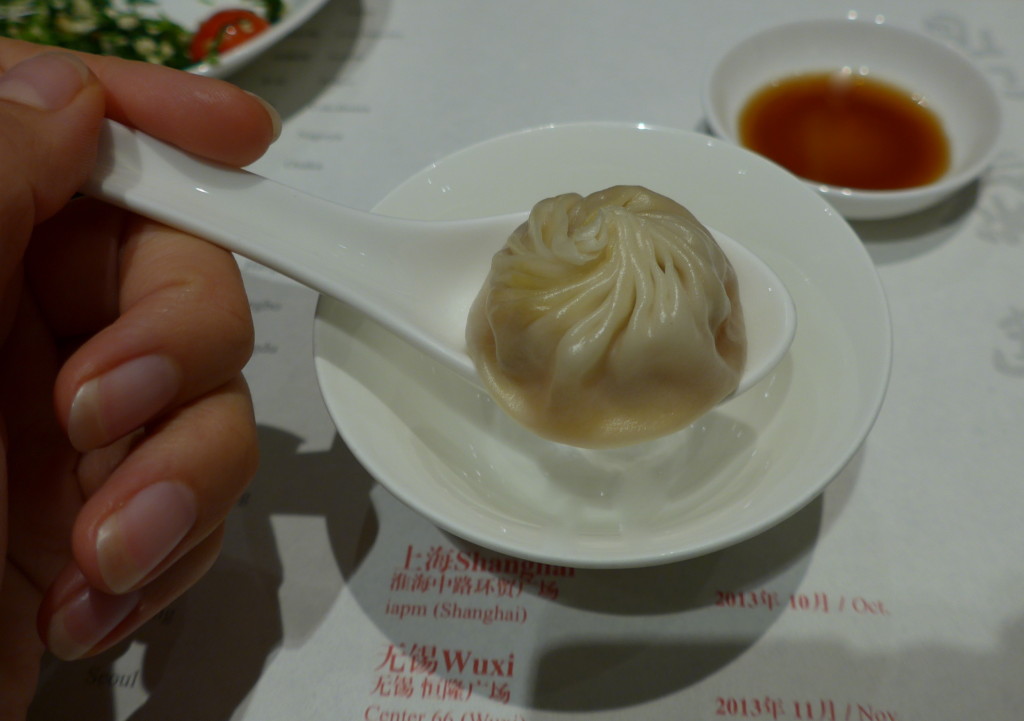 Before devouring the contents of your steaming bamboo basket of Xiaolongbao (translated as “buns in small steaming basket”); it is wise to know how they were made and how to eat them, so you do not end up spraying your entire shirt with an oily liquid as it happens to many beginners. Although, it is fun to watch the others doing so, nobody wants walk around with stains looking like a baby that forgot a bib.
The dish itself is a type of dim sum snack, that I would translate as chinese tapas. Two or three bites suffice to eat the whole piece. Be careful though, since burning your tongue if you put it all in your mouth at once will make the rest of your dining rather unpleasant.
Xiaolongbao originated in the area around Shanghai, and it is similar to tang bao, a larger soup bun with a hole on the top and a straw inside to drink its liquid contents. 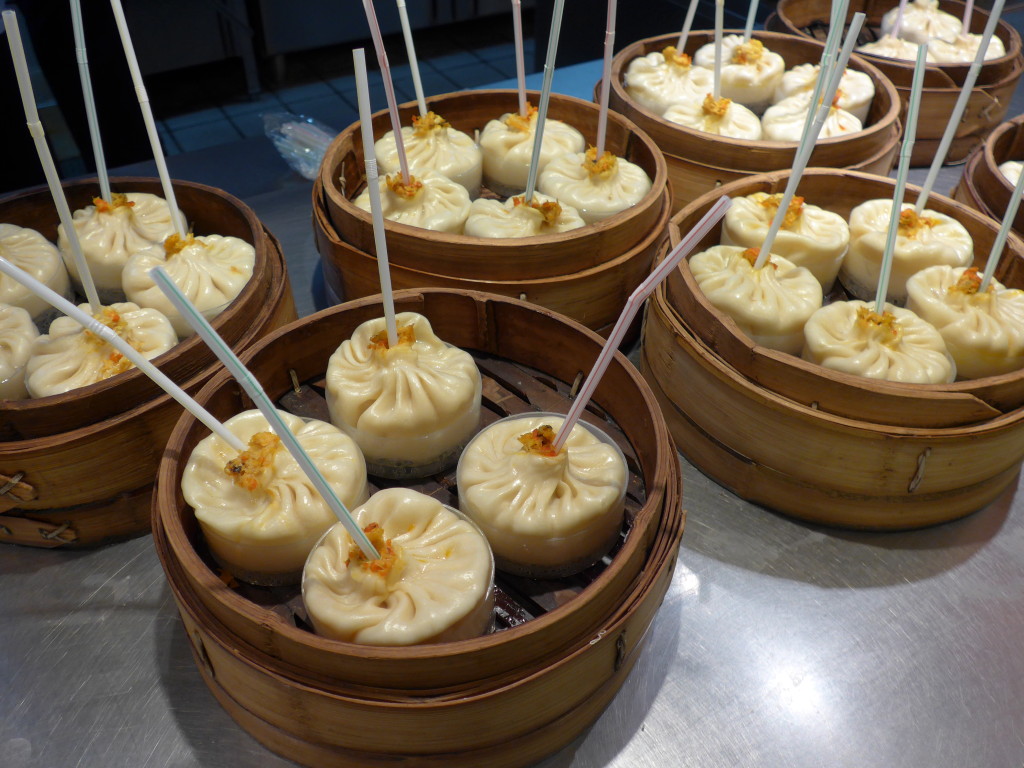 The dumplings at Din Tai Fung are about perfection: “every dumpling pastry is delicately hand-made to measure between precisely 4.8 and 5.2 grams at conception, with an exact 6cm diameter, before being stuffed and steamed in exactly three minutes.”
The silky shining dough is made in small batches so it tastes fresh when the bunny tail-shaped dumplings are being served. The material is sliced into small pieces for each required to weigh between 20.8 and 21.2 grams cooked, and rolled out into thin-skinned sheets that wrap around a broth (in the firm form of gelatinized aspic) with minced pork (the original) or more modern stuffings like hairy crab, shrimps, vegetables and at some locations even truffles (the wealthy Singapore offers this delicacy). Twisting the top at least 18 times to close up perfectly the resulting buns is a must before steaming in a bamboo basket. 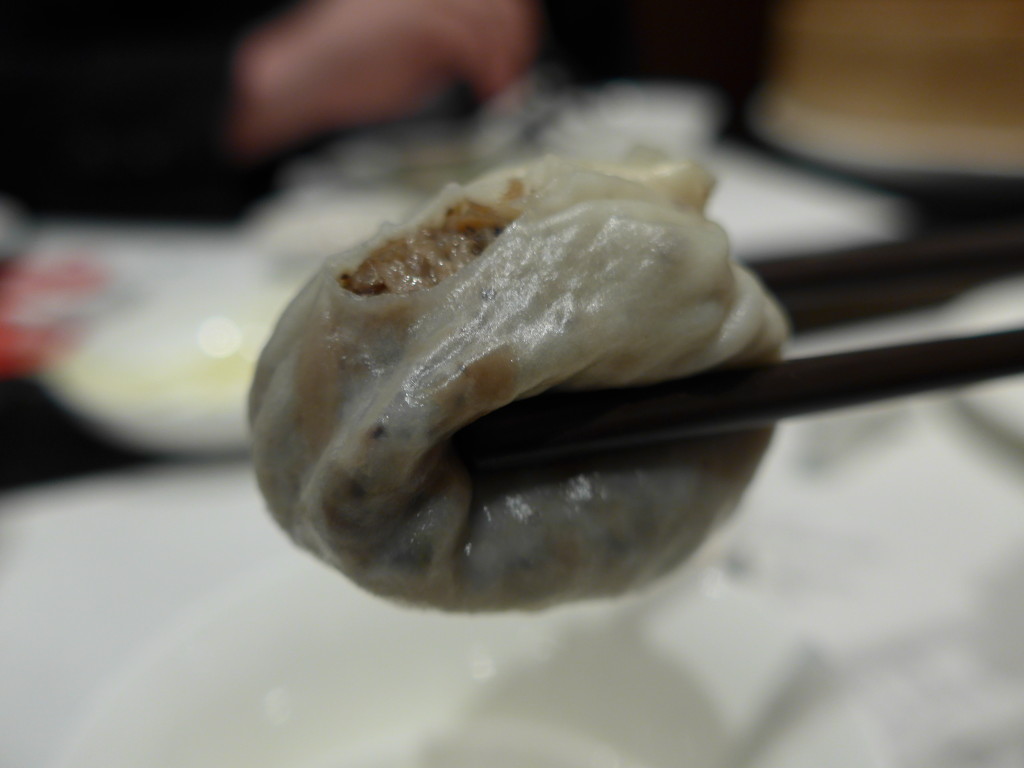 As the server opens the lid on front of you and your nostrils inhale the fresh aromas of its contents, the fog is blinding, but quickly disappears. Keep your basket closed when not picking up a dumpling, otherwise you will ruin its perfect texture supported by the apt temperature.
The right way to eat these shiny dough morsels is to pick them gently with chopsticks, so the dough does not rupture. Place them on a deeply carved spoon, and bite quickly off a tiny piece of the dough like a rabbit munching his carrot. Then, let the liquid soup, usually a pork broth, run out on the spoon, slurp it without hesitating making noisy srrrrsss sounds (in China it is accepted), and chew on the pasta-like texture of the dumpling together with its solid filling of pork or other fancy stuffings. 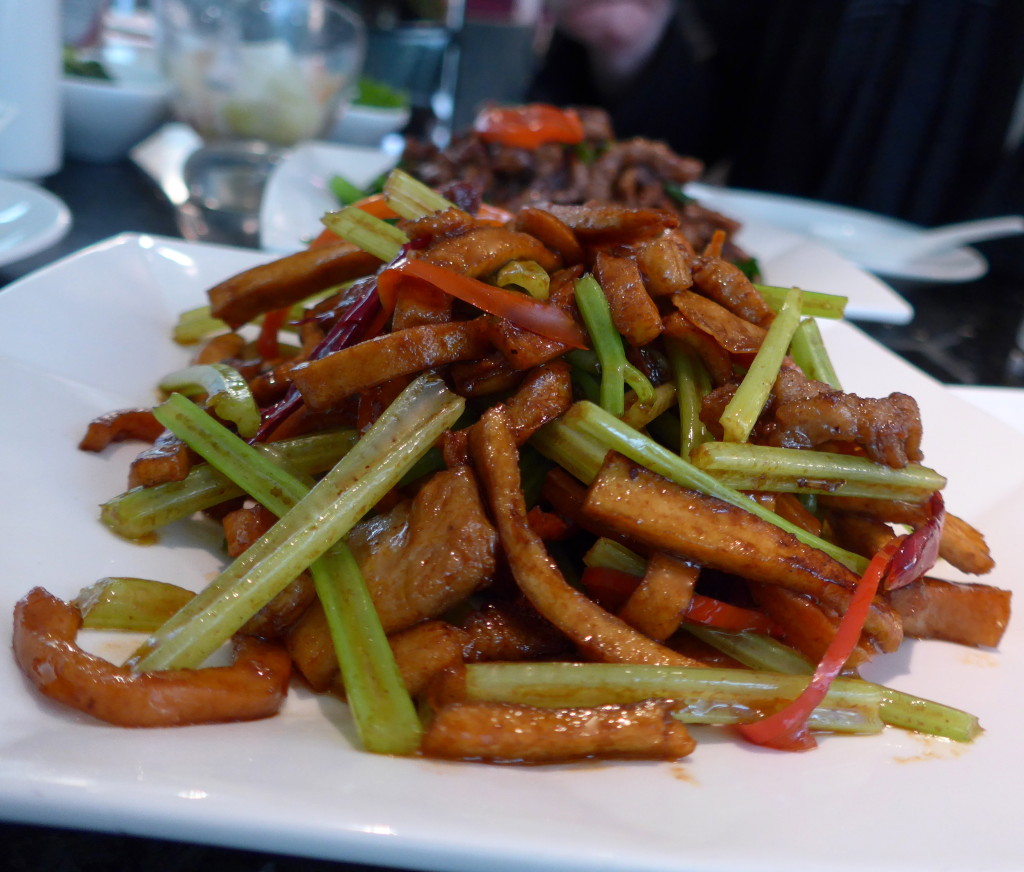 Din Tai Fung has other interesting Chinese dishes with a Taiwanese twist on its menu. I like the Asian branches the most, because of the authenticity, not cozying up to the Western palates, and breadth of the selection.
Starting with savory pickles like cucumber and various kinds of Chinese cabbage whets up your appetite and is fast on your table. There are dozens of plates to share. The Stir-fried tofu with chili and vegetables is hot, but if you do not pick the fiercely red peppers, your mouth will be just fine. 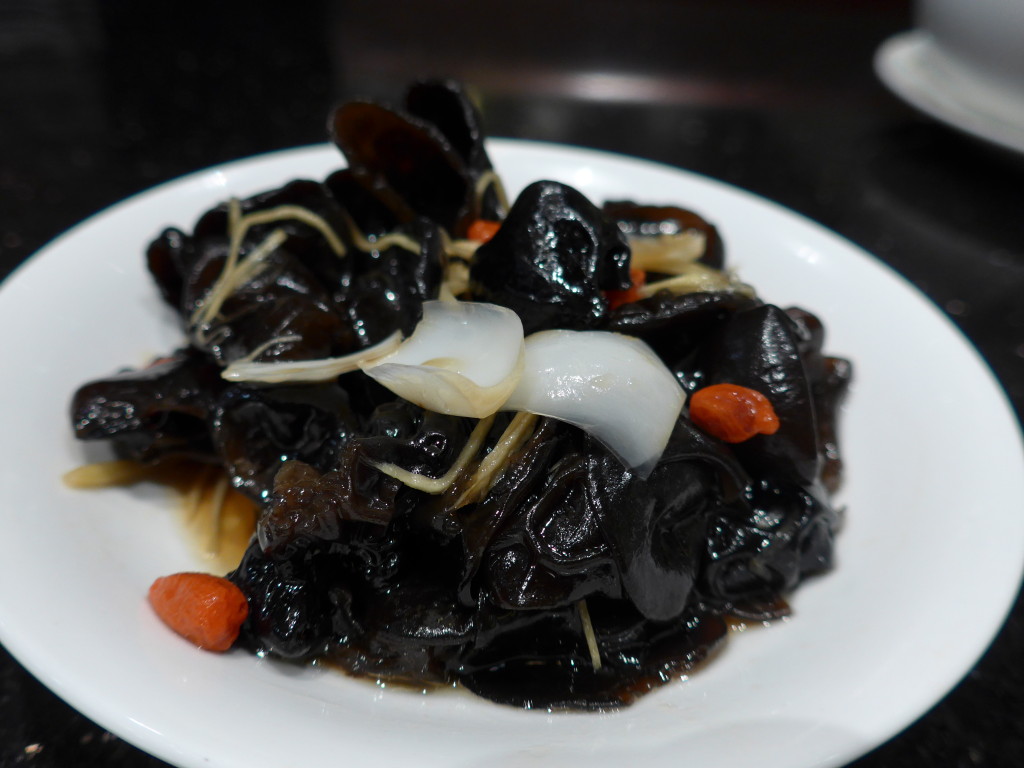 The Chinese like to call everything as having a “Special” sauce, dressing, etc on the menus. Whether it is a marketing trick or simply a way to keep their house recipes secret, is unclear, but usually it intrigues one’s palate.
Like the Oriental Salad in Special Vinegar Dressing. A chilled starter with julienne cut seaweed, bean sprouts, spicy beancurd and rice vermicelli, sesame oil. Another great vegetarian treat is the Stir-fried Hong Kong Kailan with Special Sauce.
House specials are the Braised Pork Knuckles with Soy Sauce, Pan-roasted whole Tilapia Fish or shrimps in mild gooey sauce with various assortments. Some with vegetables, others with fruits like li-chi, that is very popular. 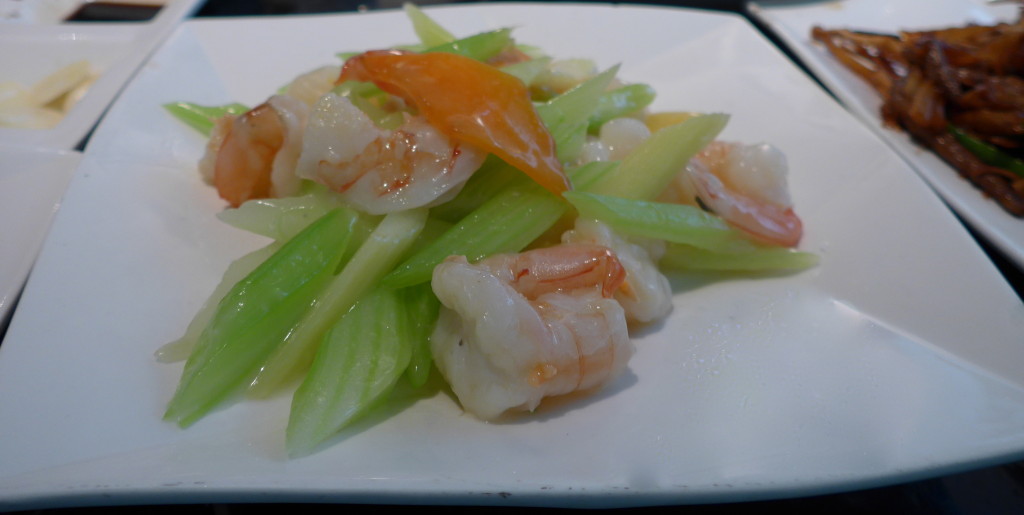 Everything can be steamed, even desserts like the Yam Paste Dumplings or Chinese Layer Cakes. But, in Asia, food conception is also tightly connected with healing and beauty enhancing properties, thus even the desserts can be “excellent for the complexion and balancing of the inner soul” as the Double-Boiled Papaya & Snow Fungus with Rock Sugar is indeed a healthy treat. The Taiwanese desserts in particular are the most interesting sweet delights (right after chocolate), I have encountered on my extensive gourmet travels.

They can be liquid like the bubble tea, also known as tapioca or pearl tea. The jelly-like balls made of tapioca starch are fun for their chewy texture. Often paired with iced tea, fruit juices and/or various milks, these are highly addictive Taiwanese versions of our Western smoothie. Sago is also used in puddings. Sago is much smaller pearl-shaped texture enhancer that usually sinks to the bottom of the creamy dessert or a fruity drink. In particular with mango it is marvelous!
Now a global business, the popularity of this Taiwanese joint mushroomed around the world from China, Hong Kong, Singapore to Australia and North America.
Address: 环球金融中心3层, Shanghai World Financial Centre, 100 Century Ave, Pudong, Shanghai, China.
Phone:+(86) 21 6877 6886
Opening Hours: Daily 10:30 am – 10:00 pm