As Lengue closed its doors, the owner has opened a new izakaya called Sagan in the Odeon district. A Parisian friend went and not just from his photos but also his fresh report in May 2022, the food looks as delectable as before, while the portions increased beyond a typical izakaya and French cuisine entered the menu’s repertoire as the Michelin Guide points out.

Sushi and black cod miso flocked in thousands of variations to Paris and penetrated well beyond the Asian restaurants into the trendy French brasseries and restaurants, yet Lengue reminds some of us uninformed westerners that there is more to Japanese cuisine than a chunk of raw fish and sticky rice. To fill the gap in the Parisian Japanese repertoire, the chef-proprietor Katsutoshi Kondo, ex- l’Atelier de Joël Robuchon and Aïda, opened Lengue izakaya in the intellectual and artsy Latin quarter. 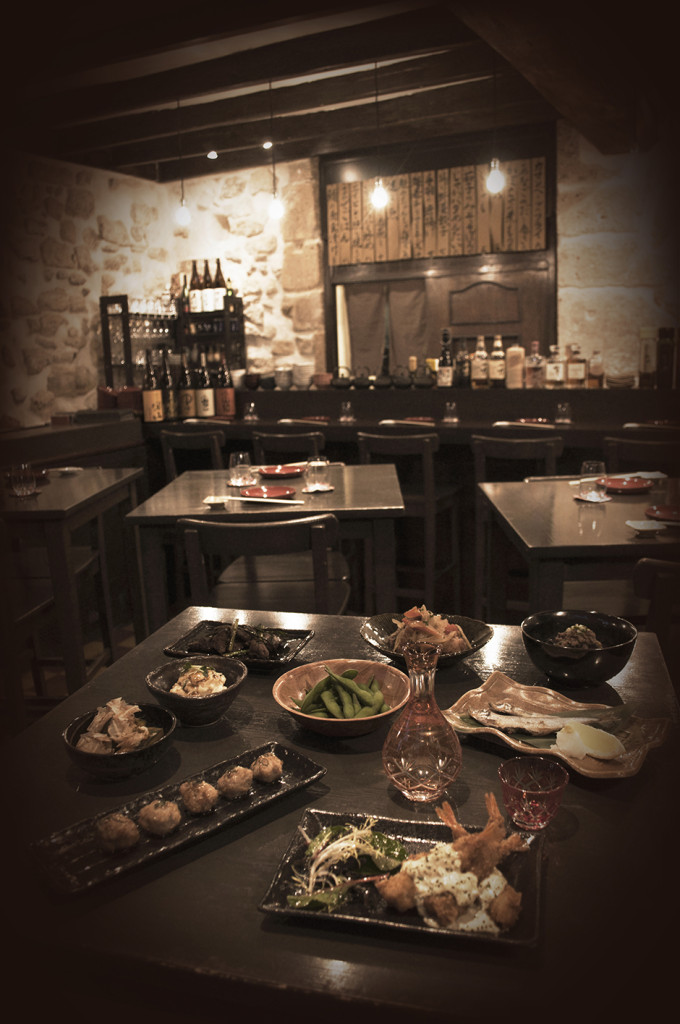 The Japanese pub concept at Lengue

Izakaya is something like a bar where Japanese tapas, served on small plates that can be shared with others, but the drinks remain the main players. Its clumsy definition as a drinking spot with some food to bite on can be explained in a more familiar way if likened to classic Spanish tapas bars.
The difference is that the spanish fried croquettes will have a Japanese twist, there will be tonkatsu, vinegary sunomono pickles, sashimi, yakitori, beef tatami, etc. on the menu.
As much as in Spain, this concept lends itself to wine and other beverages as the score keepers. It is not about pairing the wines with food. The philosophy is to have great wines and some tasty food to enjoy it all together. Wine (or other beverages) must make the impression though.

That is probably where the “Dernière Bouteille” idea was born at Lengue. On a special wine list every single last bottle in the cellar is being featured. It is a hit or miss, but not on a big scale, since the prices are some of the most customer friendly in all of Paris. You can get a smile evoking bargain of a great vintage from a reputable producer – like we did with our bottle of St Emillion Chateau Figeac 1990; or you can get a corked or vinegary 1970s or older wines.
To be fair to Lengue, the risk is highlighted by the polite japanese wine waiter, and he is also eager to advise well depending on your budget and taste preferences.
He nodded to my choice of 1990, which was a superb year in St Emillion not only for the utterly expensive Cheval Blanc. Its neighbour Chateau Figeac rewarded us with supple tannins, still communicating juicy red fruits through its 24 years of life. This perfectly developed Bordeaux with its muscles stretching rather elegantly played the same notes with fatty beef tataki in soya sauce, onions and shiso leafs. The Figeac was like a best friend supporting the meat rather than overshadowing it. 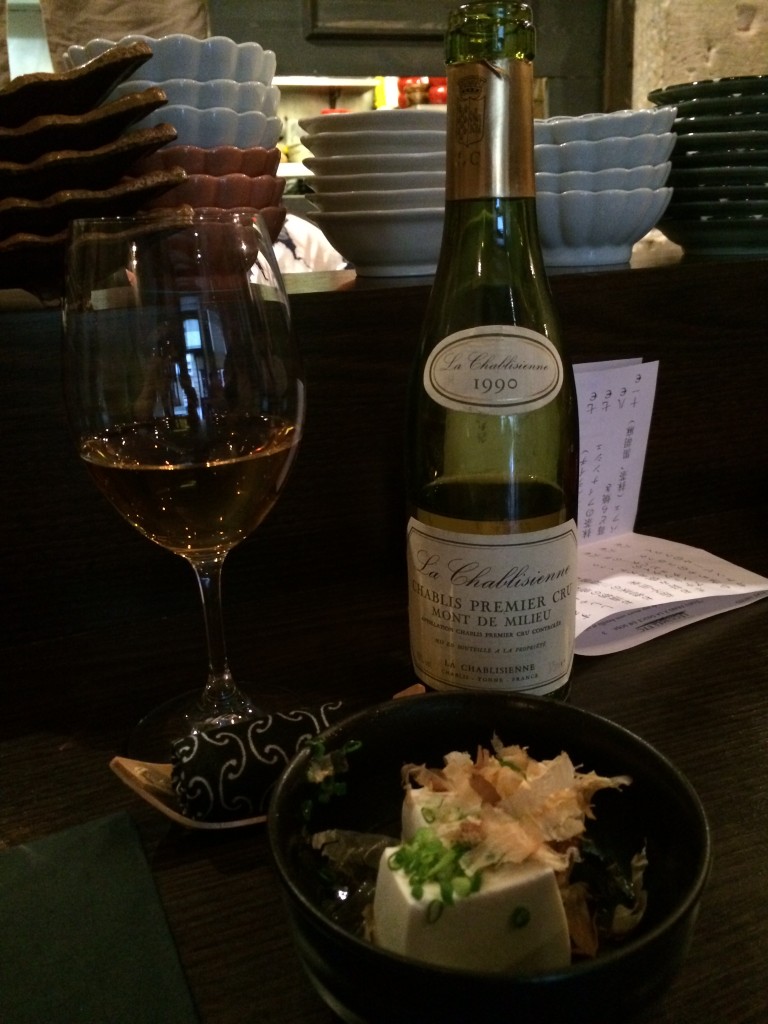 The 1990 became the vintage of the evening as we started with a half bottle of white Premier Cru Chablis from La Chablisienne. Chosen from the regular wine list, the wine was very showy and slightly oxidised giving off an enjoyable nutty character, roundness with an off-dry mouthfeel. Not an ideal aperitif, but the fried camembert worked magic with this expressive wine. The lightly seasoned soft tofu also got a kick from it. 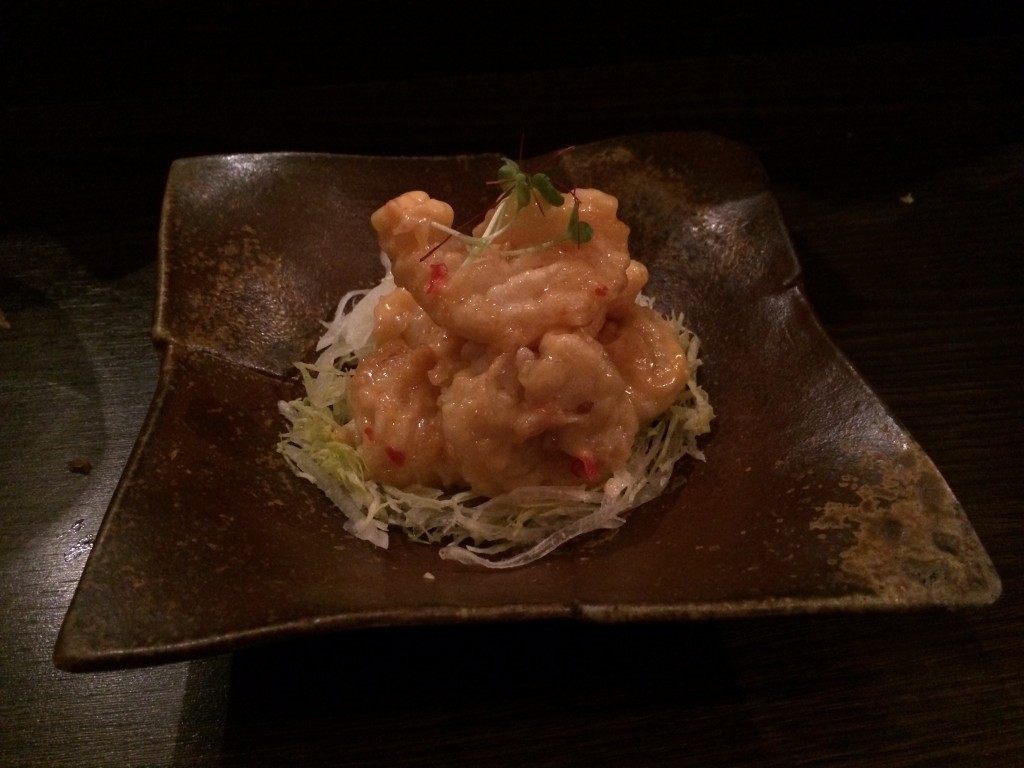 The shrimp tempura made in the creamy mayonnaise sauce à la Nobu could not befriend the sweetness of this wine. Its oily nature needed a zap of acidity found more in younger wines. But this was me, the wine geek, I had to ponder over the pairings.
Since we drunk the “Dernière Bouteille” of the 1990 Figeac (sorry you missed it!), there were still many treasures to be found.
Like the DRC from one of the top millennial vintages – 1982. The Burgundy wines are even more sensitive to proper storage and provenance can become an issue when it changed owners’ hands too many times, so this choice might be pricy without a reward.
My favourite red Hermitage from Paul Jaboulet was featured in 1987 vintage for €107. I would take the risk (Yet, I am a wine buff and food addict, so it still might be too much for others who would rather spent it for a pair of shoes). 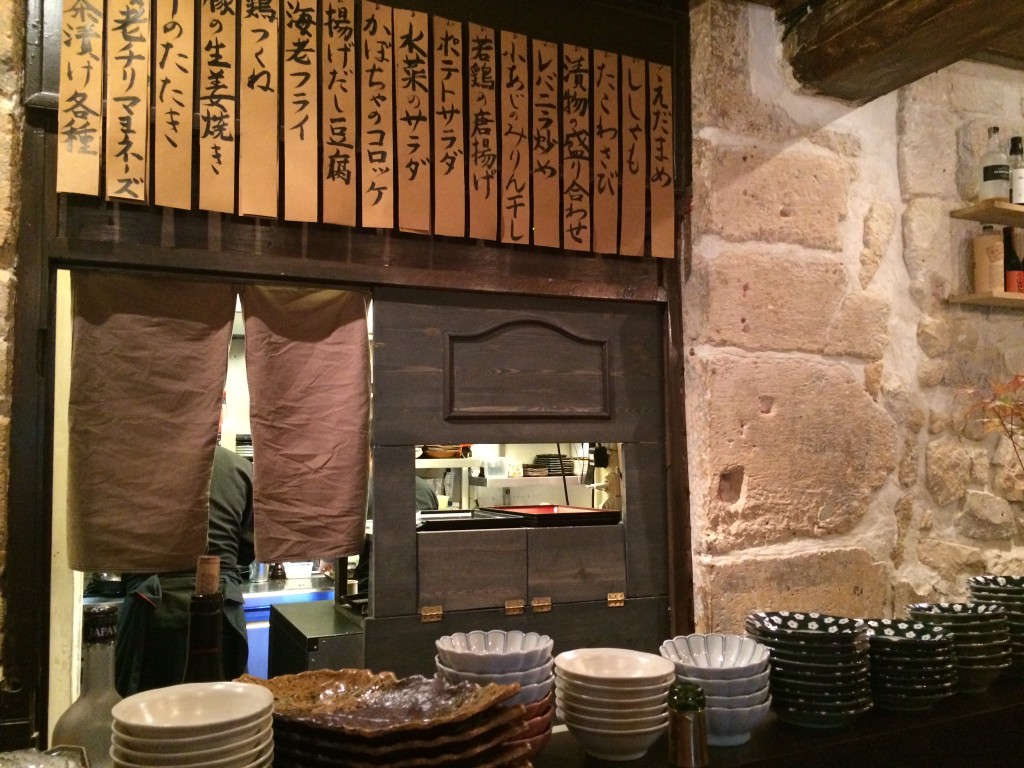 Lengue cannot be a true Japanese establishment if there were not sake, shochu, beer and some Japan-inspired cocktails available, so one is free to choose what beverage appeals to him most.
The interior goes hand in hand with Lengue’s casual purpose. Set in a veritable old Parisian environment with wooden beams sheltering the overhead space and pale sandy coloured stone walls, the wooden bar with kitchen right behind it highlighted that food and drinks have at least an equal status here. The more open upstairs room will be acceptable for claustrophobics, where the tight cellar-like vaulted space downstairs remains for those who like to hide from the curious tourists peaking inside. Next to the stellar wine selections, it is also the authenticity of Lengue, confirmed by tables full of Japanese customers, that is its real draw.