Tablettes is a modern gastronomic take on Mediterranean cuisine of a former Ducasse protege Jean-Louis Nomicos. The chef was awarded two stars when working at the restaurant Lasserre and now at his first own establishment he treats diners to a superb one Michelin star dining. 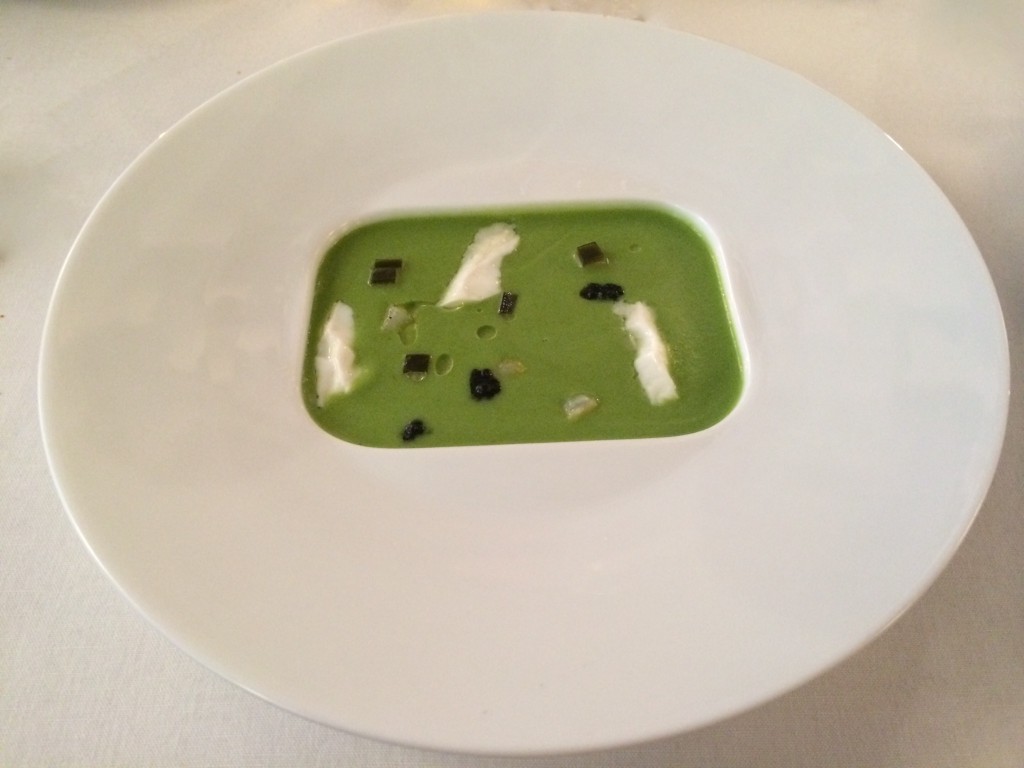 “Flavours do not mix, they cohabit harmoniously, and what appears arid, dry and concentrated reveals generosity and kindness to curious spirits and palates.“

And in his often changing menu he meticulously sticks to this  approach creating sublime, balanced and interesting plates. 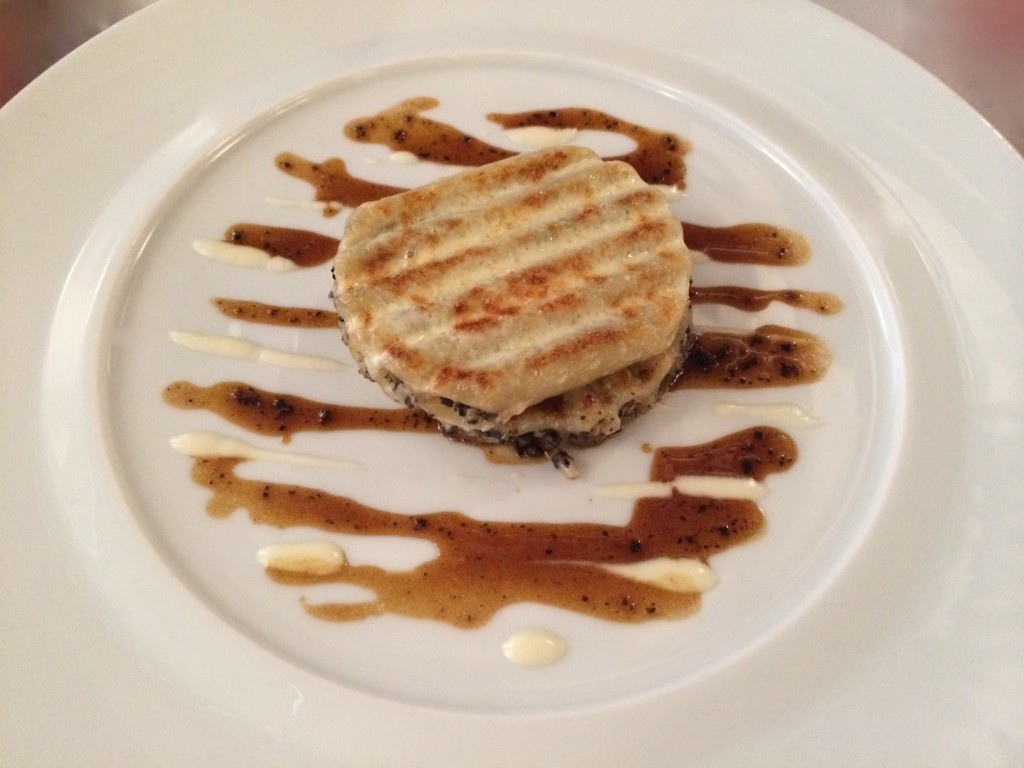 Flexibility is reflected in the choice from a la carte, more affordable lunch (€42), four-course discovery (€80), six-course seasonal (€120), and eight-course degustation (€145) menus. The last two include the chef’s signature macaroni dish. The menus are great value for money since both of the later include the lobster, macaroni and beef dish together approaching €200 when ordered a la carte.

The already legendary Macaroni with black truffles, foie gras, celery served in a veal juice, are crisp on the top and taste sinfully yummy. As the chef fell in love with his Italian wife, at the same time he enamoured the fragrant truffles of her home country, using them regularly in many dishes. 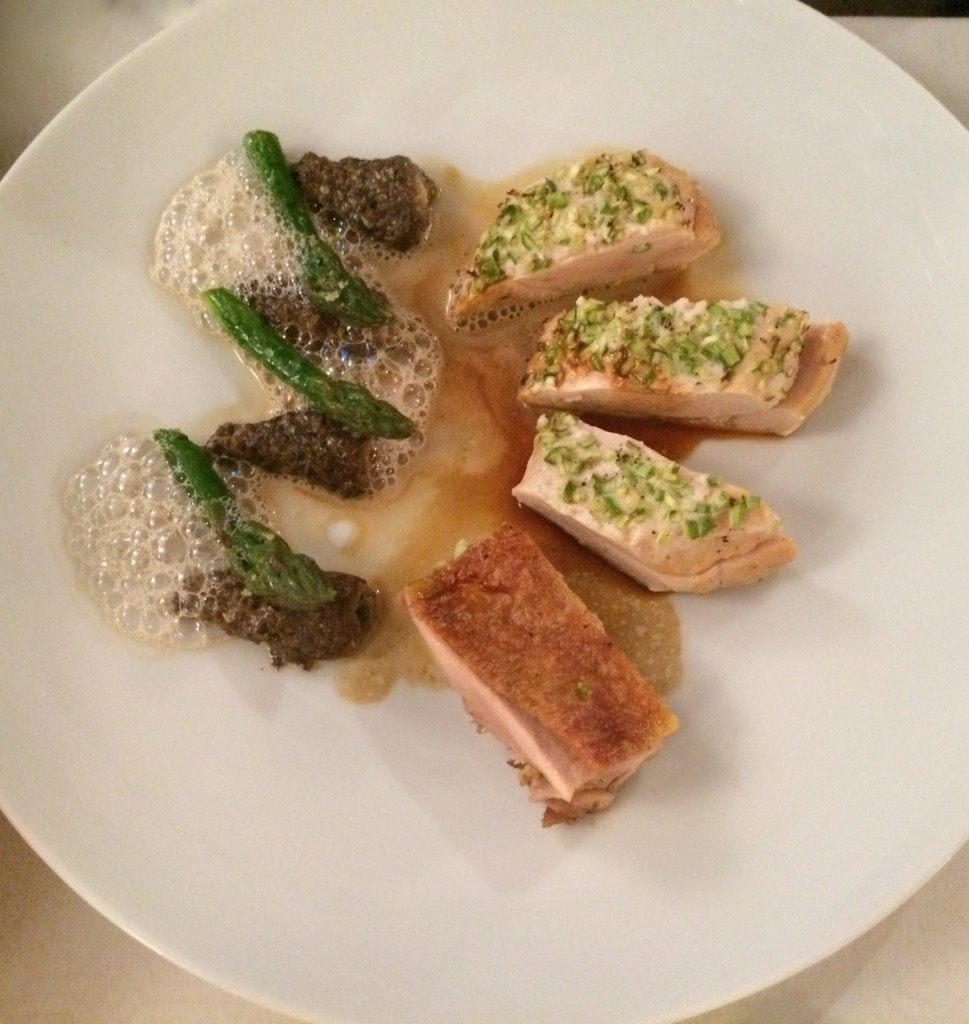 To get a more precise sense of the chef’s seasonal orientation in the choice of his ingredients I tried the summer evoking Zucchini Velouté with fine parmesan shortbread (Velouté de courgette). It was citrusy fresh, with flashes of richness from creamy cheese, like a hot summer day – heavy in its heat, while refreshing with the sun’s light.

As a daily special was included the Stuffed Bresse chicken in jus from Arbois wine with stuffed morilles and asparagus tips. It was served in two variations, as skinless breasts sprinkled with spring onions and with a crispy skin for all these, who relish this more naughty part of the bird. Nomicos cooked the by AOC status stamped chicken to such tenderness that its texture was very close to the cooked morilles mushrooms. 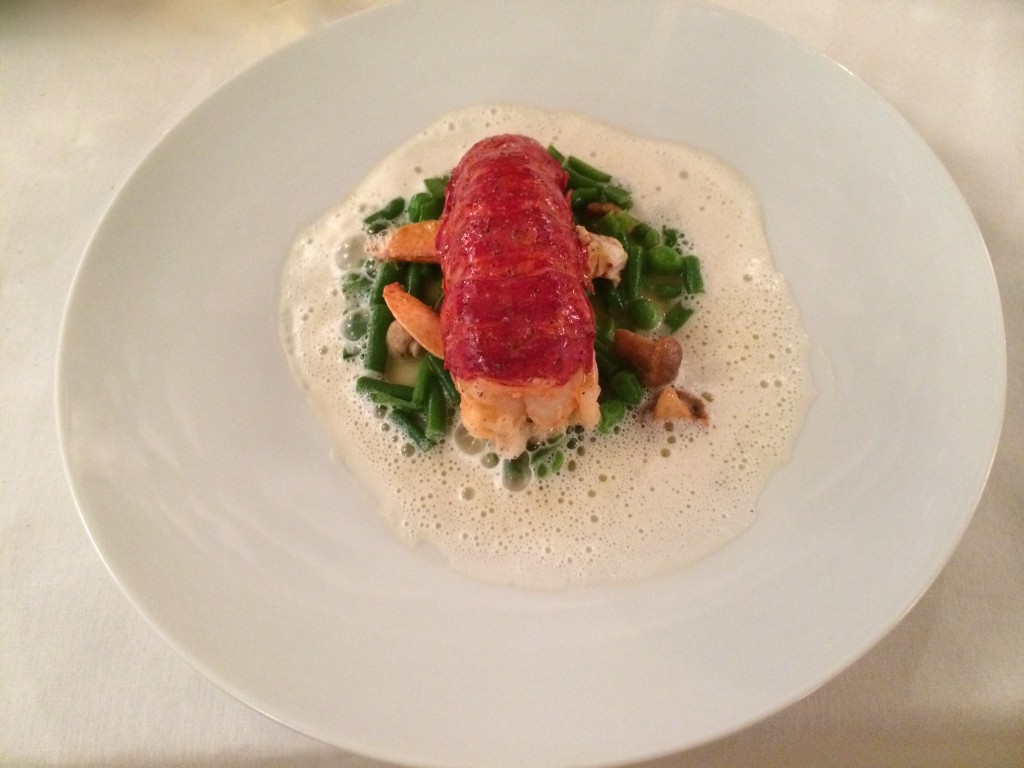 I had to try the Roasted lobster with mushrooms, French beans and peas in delicate milky verbena emulsion. The massive  meat of the lobster was so delicate and the verbena emulsion so Provencal that for a minute I thought that I am sitting at a table in by-sun-warmed, high-perched southern village.

The chef’s elegant food calls for an elegant wine such as well-aged Burgundy. We went for a 1988 Grand Cru Chambertin, Clos de Beze. This red lean beauty queen is produced by Domaine Bruno Clair. Lavender on the nose once again evokes the South. This bottle was one of Bruno’s first vintages at the family domaine that he inherited. Mostly centenary vines prevailingly planted in 1912 yield complex wines with vigour of the fruit, but also enough balancing minerality. 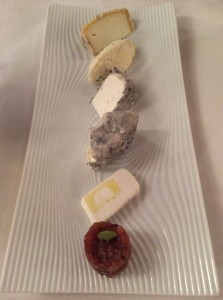 Selection of goats cheeses from Dominique Fabre concluded our romantic gustatory trip back home in the Mediterranean in the fresh spirit. It was interesting to try a wide variety of cheeses from one producer.
Being located in the Paris’ most noble neighbourhood of the 16th arrondissement, the interior of the restaurant is sleek and refined. Colourful design reflecting the chef’s Mediterranean background in tones of orange, sand, and pebbles transfer the present diners to Southern France and its playful nature. The walls were formed with interlaced strips of sand-grey wood, resembling a deconstructed basket, the typical market accessory in France.

Open daily for lunch and dinner.