La Merenda's chef Dominique le Stanc worked at numerous Michelin-stared restaurants prior choosing a more simple life involving casual home cooking. He arrives on weekdays on his bicycle with a box of fresh ingredients for the day's menu.

From Alain Ducasse’s praise through high-dining naysayers alas local casual food lovers, La Merenda became a coveted Niçoise dining institution uniting foodies with seemingly disparate eating-out preferences. What attracts them to this family eatery punched into a small thoroughfare in Vieux Nice (Old Town of Nice), is the excellence of home cooking served unpretentiously. Add a wide smile of the chef and his wife, and they won you over. 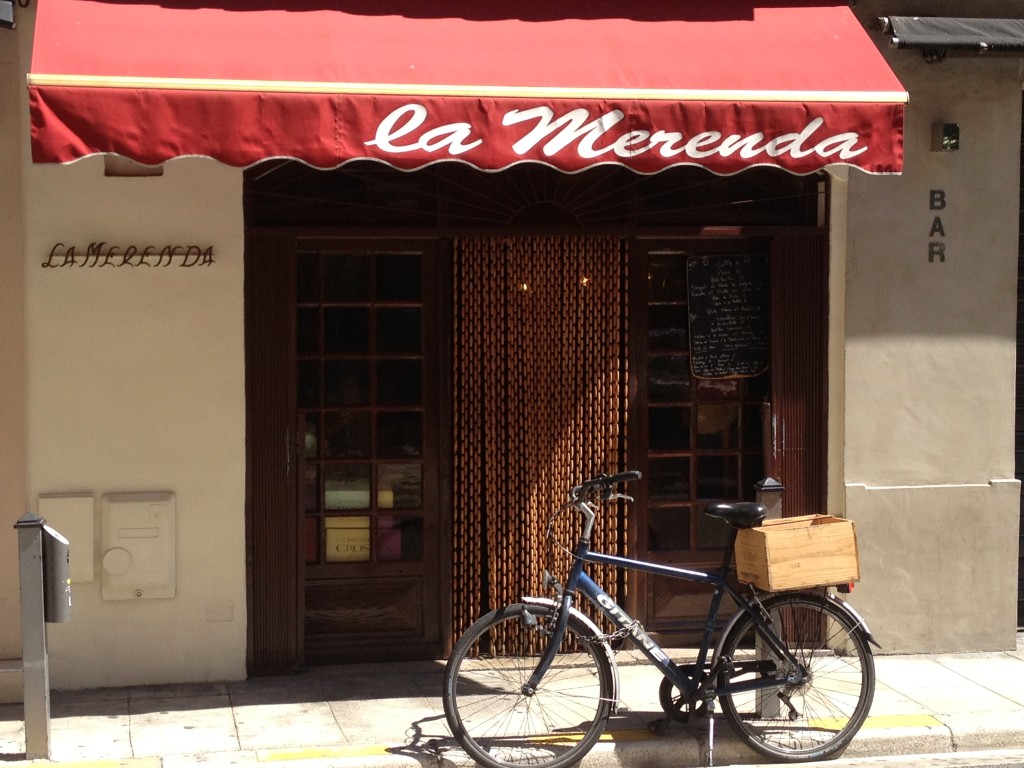 Unlike the owners and chefs of the other popular bistros in town such as the adorable Bistrot d’Antoine, La Merenda’s chef Dominique le Stanc worked at numerous Michelin-stared restaurants prior choosing a more simple life involving casual home cooking. He arrives on weekdays on his bicycle with a box of fresh ingredients for the day’s menu. Quite a change from cooking at one of the once Riviera’s most luxurious hotels (Le Negresco) to a place serving water in glasses adorned with mermaid stickers and whose kitchen hardly accommodates two people and a stove. For many diners though this is a preferable atmosphere to the stuffy gilded walls of Le Chantecler at the Negresco. 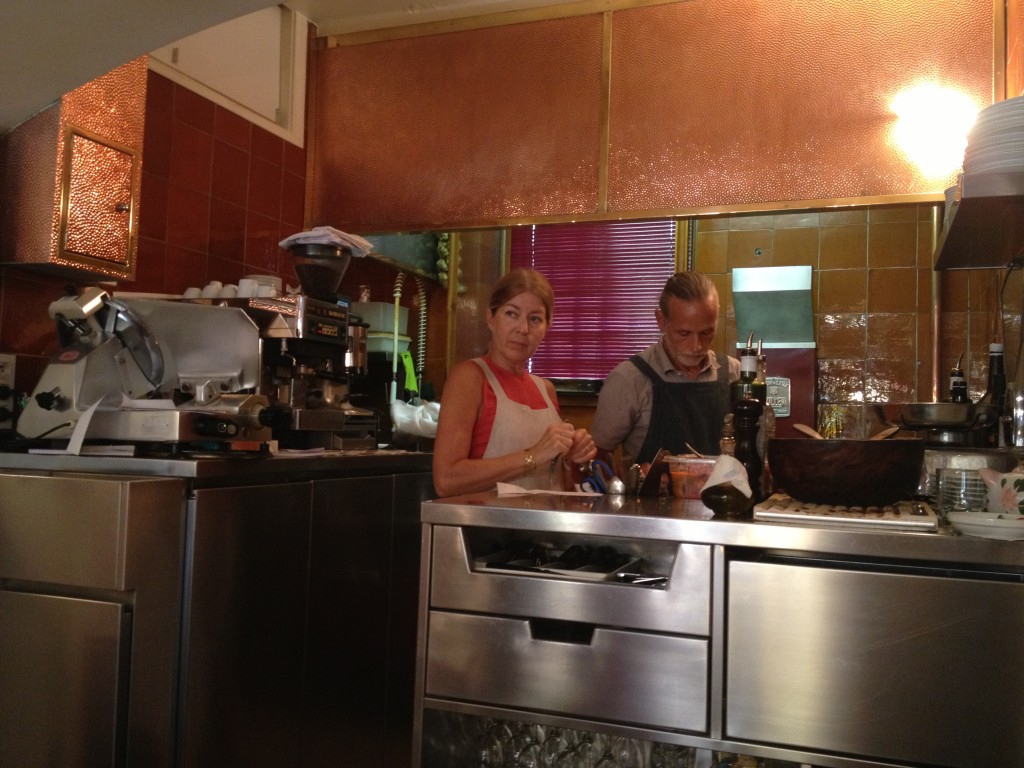 The dining area is also very small, the half-dozen tables are clad with Bordeaux-red covers and the walls display a blend of local modern art and family reminiscent photographs.
La Merenda takes only reservations in person since the restaurant does not have a phone, so one must keep it in mind when planning to eat there. In the instant world of email’s and mobile phones, it is a seaside holidays evoking lifestyle. Bringing cash will also save you from running to a nearby cash machine since cards are not accepted.
The chef’s “returning to the essence of cooking” with market-driven, fresh ingredients prepared with a sensibility of an experienced chef attracts back many regular guests. 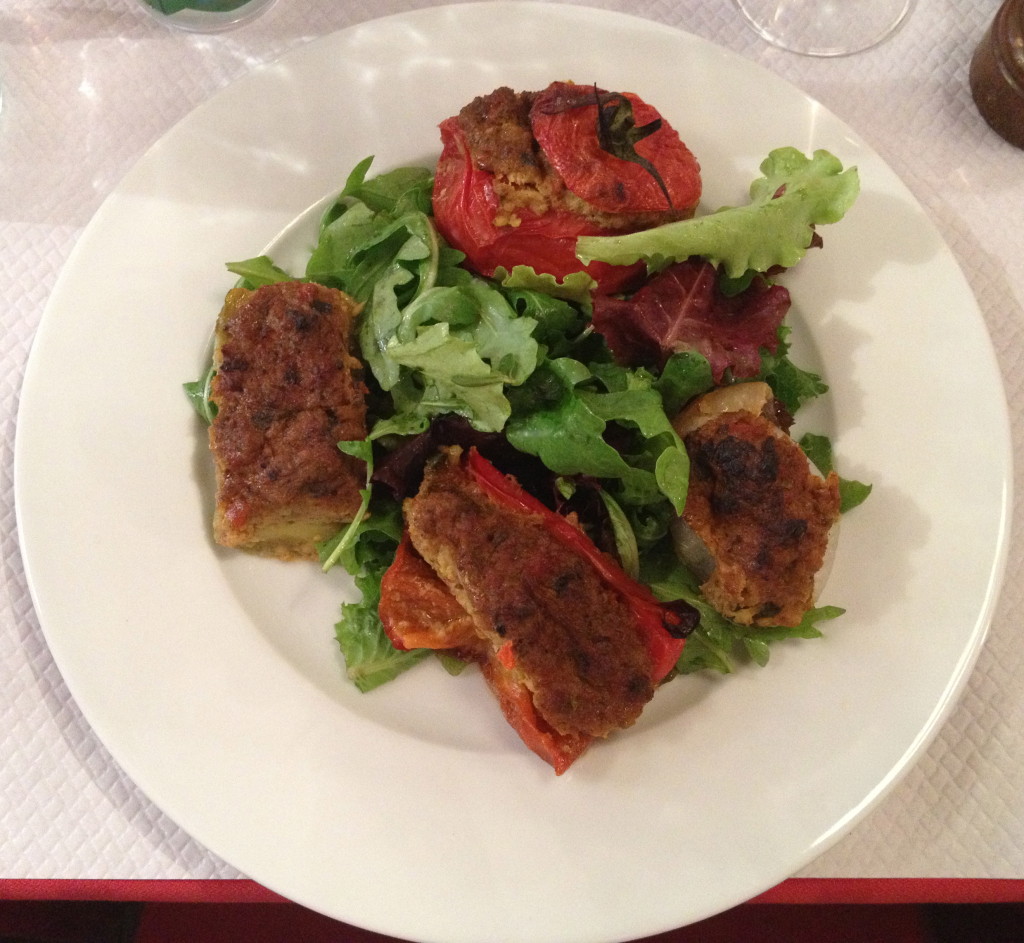 Try the chef & wife’s adaptations of traditional niçoise specialities such as ‘les sardines farcis’ (stuffed sardines), ‘les petits farcis’ (minced meat stuffed vegetables) or ‘les beignets de fleurs de courgette’ (fried courgette flowers) all served only in their season, which peaks during the summer.
Desserts change according to the mood of the chef, but if there is the Tourte de Blettes, a sugar dusted cake filled with chopped green swiss chard, standing on the kitchen counter, then go for it, since you won’t probably taste in anywhere else outside the Côte d’Azur.
There are some wines, mostly local, including for La Merenda’s food suitable house wine, but do not expect a lengthy wine list. After all, it is a perfect opportunity to try the well-priced Bellet AOC growing nearby in the hills just behind Nice.
La Merenda not just became the most coveted dining spot of the food loving locals and travellers alike, but it has also sparked the local home-cooking frenzy with many familial bistros opening up in a recent decade around Nice’s centre.
4 Rue Raoul Bosio, Nice, France

No number, reservations in person or just show up.
Mon – Fri for lunch and dinner