Ma Yucca is simple, but quality-driven, both in its decoration as well as on its menu. Although the tiny restaurant is owned by two Japanese sisters – Mayu and Yuka, the local French influence came from Yuka’s culinary experience with two-Michelin star chefs in France prior to opening her own place in Nice. Mayu advises diners on the menu as she is in charge of waiting the tables. 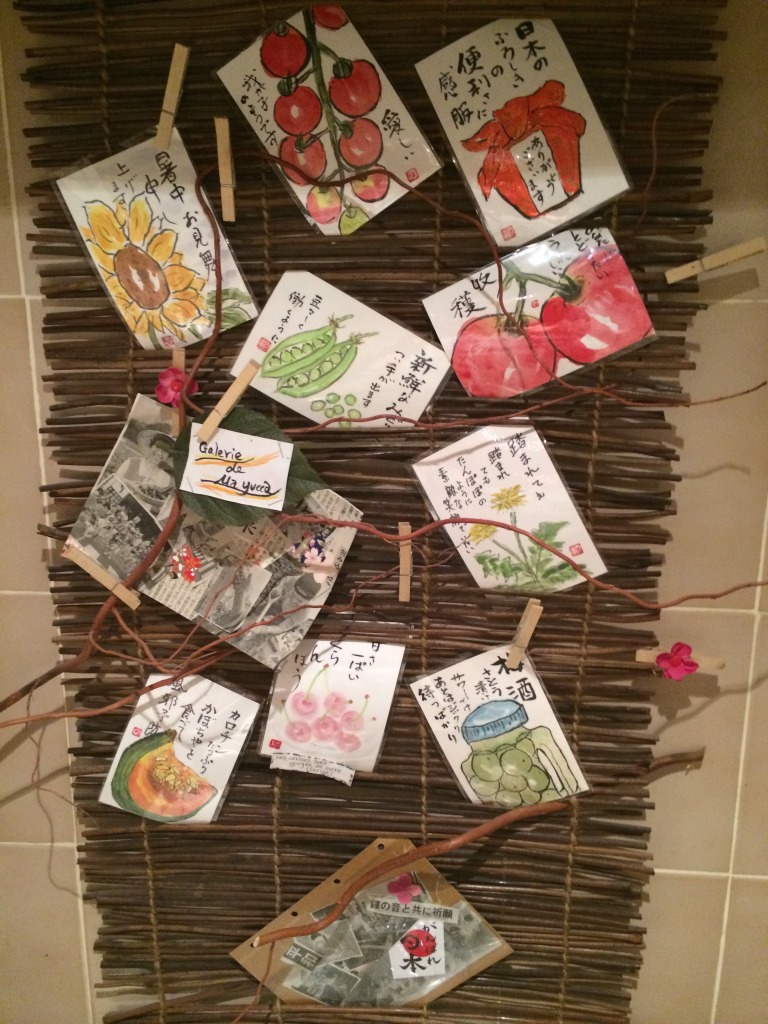 Meat features at Ma Yucca more than a usual western sushi fan would expect at a place run by Japanese. But, as in every country, Japan has diverse regional cuisines and meat forms the culinary base in some of them. Just think about the premium grade Kobe beef or pork gyoza.
A very casual lunch offers another level of experience than a more relaxed dinner setting. The lunchtime is highly popular between the local Japanese community, so Ma Yucca’s tiny premisses make you feel as if you were somewhere in Tokyo. The lunch menu changes weekly and is updated on the restaurant’s website. 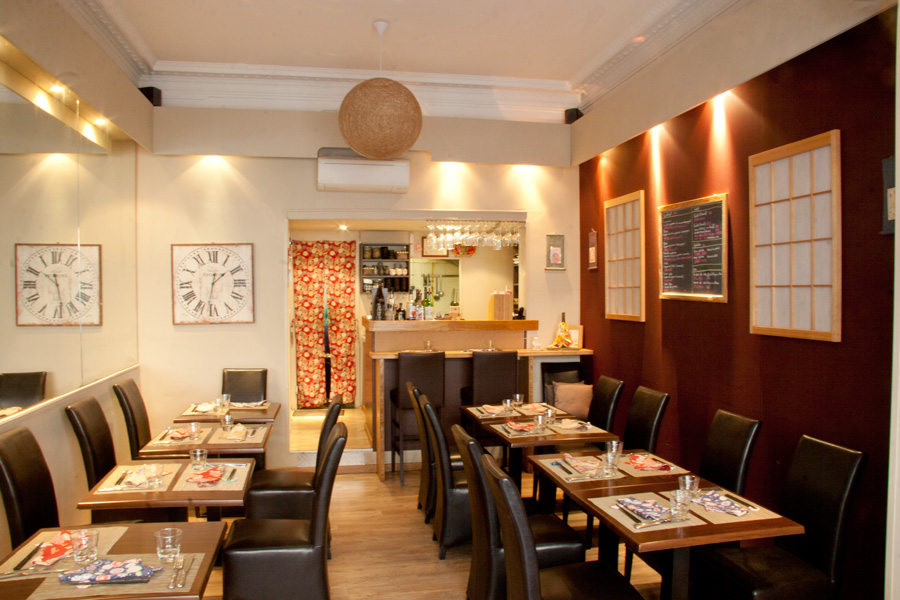 Some starters, such as Ma Yucca Salad consisting of mesclun, sprouted soybeans, string beans and seaweed in sesame sauce, also feature on the regular dinner menu. It is a healthy and refreshing starter that keeps enough space for a meaty main course.
One week you can find a Pan-fried porc gyoza with chinese cabbage, the other a Salmon tataki or anything that the chef prepares from locally available ingredients.
Mains are usually three different plates. I went for a superb “Sushi demi-cuit” – partially seared sushi of salmon, topped with raw red eggs of lump and spring onion. Served with pickled ginger and soy sauce in which you dip the perfectly made sticky rice buns with fish. A small bowl of miso soup came with it on one wooden tray. The ‘Japanoholic’ in me was content. 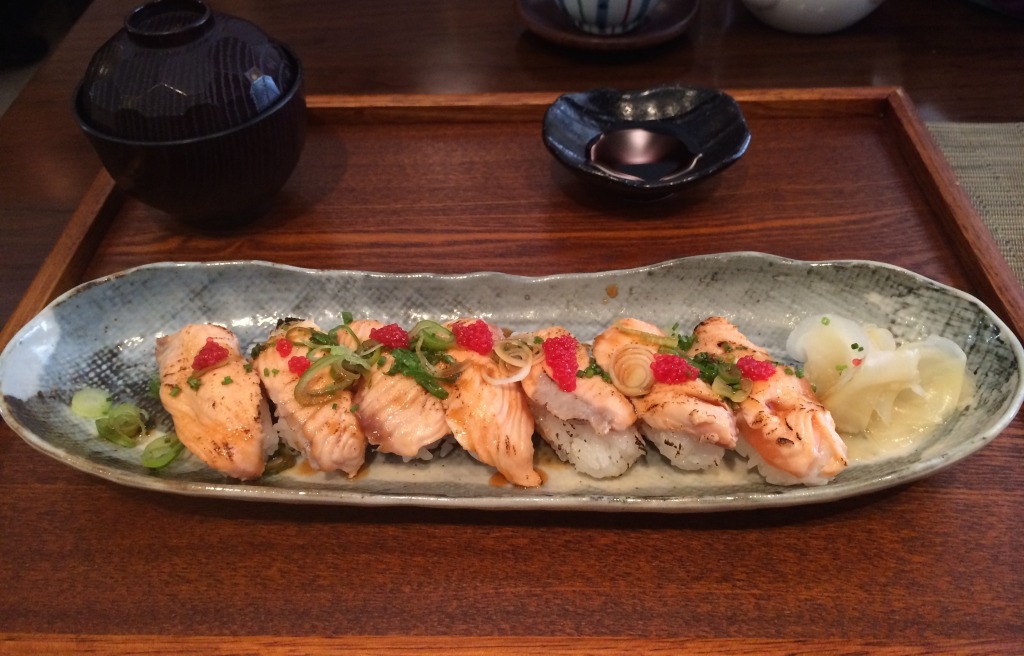 The meat-craving usually have a wider choice. The other two mains when I dined there were a Fried flank steak in a bbq sauce in Japanese style served with a bowl of white rice or Salad with minced pork meat.
The menu of a starter, main dish and a dessert comes at €23 and a main course with a starter or dessert is 18 €. Being in a sweet mode and wanting to try all three desserts (Assortment of desserts), so I paid €25 for a perfect re-energising lunch.
Cheesecake with yuzu and oreo cookies, Crème Brûlée with matcha powder, and Cantaloup melon soup with vanilla ice cream were a delightful modern Japanese take on Western desserts by adding typically Japanese ingredients such as green tea or citrusy yuzu making the lighter. 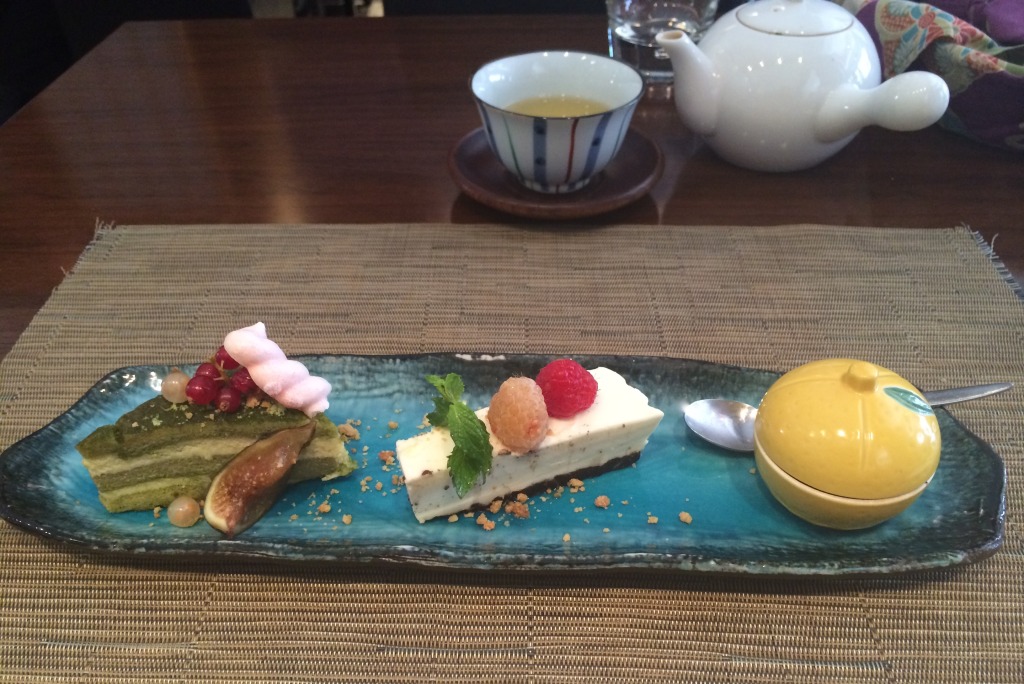 The dinner four-course menu selected from the à la carte is also well-priced. At €30 per person it gets you an amouse-bouche, your choice of starter, main course with a bowl of rice and a dessert.
The wines are all under €50 (25 on average) for a bottle and all French. They are well-chosen for value and span all the main wine producing regions of France. Sake and schochu (a strong distillate from potatoes flavoured with various fruits that are marinated in it), Japanese beer Asahi and Kirin, are also available. The only disappointment is the limited choice of Japanese teas – only sencha and genmaicha. From a country that invented a tea ceremony, I would expect more.
Address: 26 Rue de la Buffa, 06000 Nice, France
Contact: +33 (0) 493 88 39 84
Opening hours: Closed on Tues & Sun. The other days open for lunch from 12noon-2pm & dinner from 7pm-10pm