Yoshitake is an exclusive member of the coveted club reserved solely for three-Michelin-stared sushi chefs in Ginza. Serving Edo-mae sushi right in front of you, all matching the seasonally changing Japanese ceramics is as much a performance as it is a gustatory pleasure. Although his nigiri sushi is traditional, the chef’s consistently superb otsumami (snacks) and slight twists of the sauces lifts this omakase from your overloaded memory of raw fish sampling in Japan. The tiny restaurant is hidden, like most of its fish-centered siblings in this ultra-dense area, inside a nondescript building behind a Japanese sign, confusing even local taxi drivers. Two small but comfortable and simply elegant rooms accommodate a maximum of 11 diners. The larger room is reserved for Yoshitake-sen, and the more private is served by his protegee. 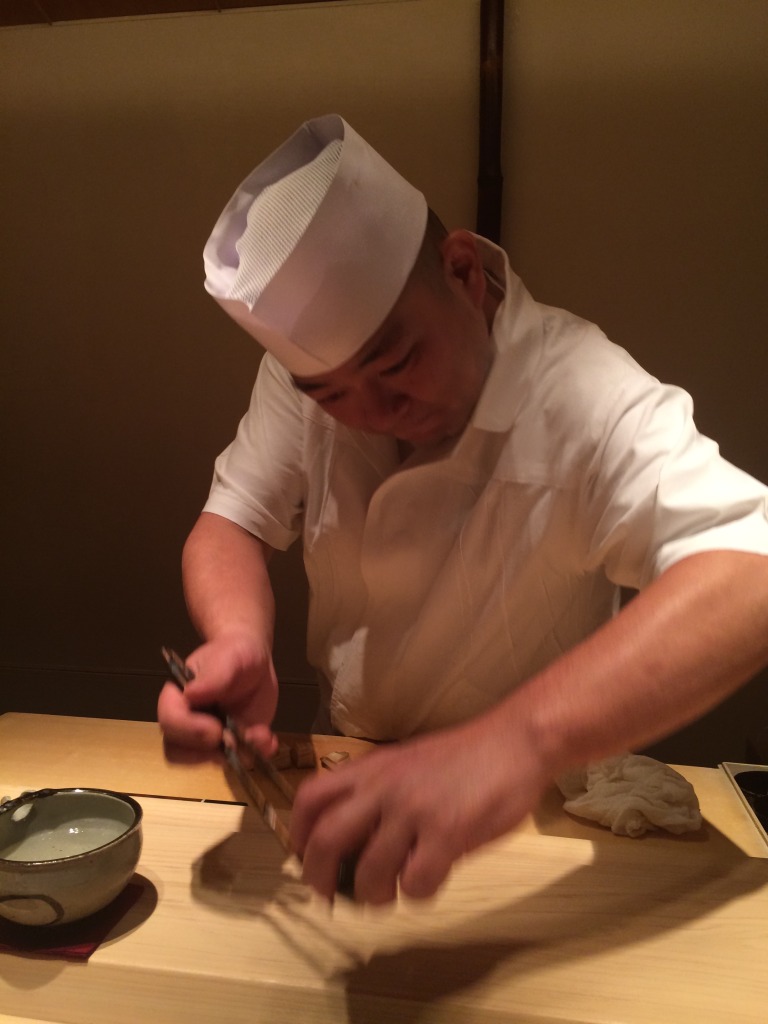 Watching Yoshitake or his longtime honed co-chef (above) slicing and assembling each plate is entertaining for foreigners even more since most of the staff here are very friendly and speak English, a rarity at restaurants in Japan. The sushi counters are made from a single slab of hinoki (cypress) wood, highly praised for its finesse.
The omakase starts with interesting, seafood-based snacks (otsumami) like the highly seasonal November Koubako female crab with its roe jelly, followed by a number of sashimi plates, which in the fall could be Ika (delicate squid), Kanpachi (amberjack), Saba (mackerel) or other seasonal fish.
More otsumami such as the warm Tender octopus and in its seasonal peak juicy and smooth Ikura (salmon roe) sprinkled atop rice in a cup preceded the highlight of the dinner, the Steamed abalone with Liver sauce. 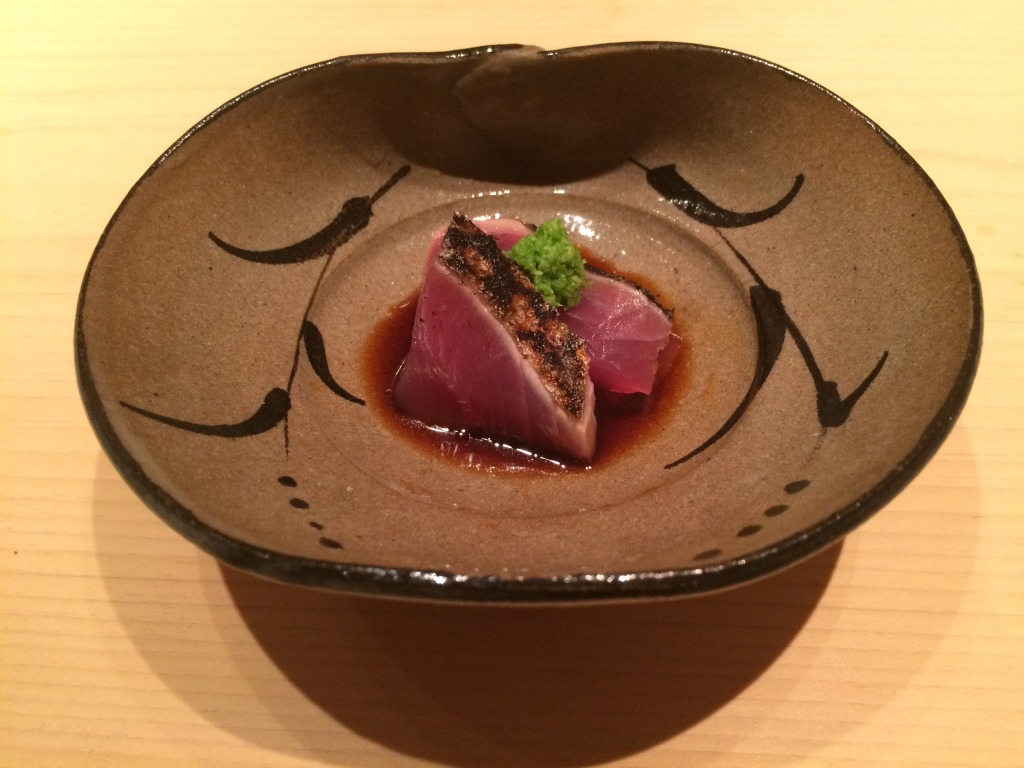 The steamed and sliced precious Awabi (abalone) was served with an oddly olive-meets-seaweed coloured sauce of the abalone’s liver and other ‘secret’ ingredients. The tender, silky smooth texture of such perfectly cooked flesh, dipped in the thick and intensely rich sauce, was one of the best dishes of my indulgent life. If you show signs of heavenly bliss as we did, for the leftover sauce you get a small cup of rice to mix it up. The rice is savoury, seasoned with red vinegar as for all of the chef’s sushi.
The Seared Bonito sashimi was repeatedly (I’ve dined at Yoshitake for three consecutive autumns) the best I have ever had and is always served in November. Its slightly smoked crispy skin melts the underlying fat and the meaty raw centre contrasts wonderfully with its chewy texture. Topped with finely diced pea shoots that like a feather on flesh lift up the fish up to soaring heights.
Steamed egg custard in a tiny cup layered with male crab warms you up for the second part of the omakase tasting – about nine bites of seasonal nigiri sushi (O-Toro and Chu-Toro are always included) closed off by Temaki tuna hand roll. A slice of Tamago, at Yoshitake styled like a slightly sweet rolled omelette seasoned with soy sauce and rice vinegar as in Japanese breakfast egg omelette, cleans up your palate from all that fishiness. It arrives customarily to mark the end of the set tasting. If you want more sushi, the chef will ask you before serving it, and will charge each extra piece.
A small bowl of the final miso-based Owan soup settles the stomach as does a cup of green or roasted hojicha tea that is usually served at the end. 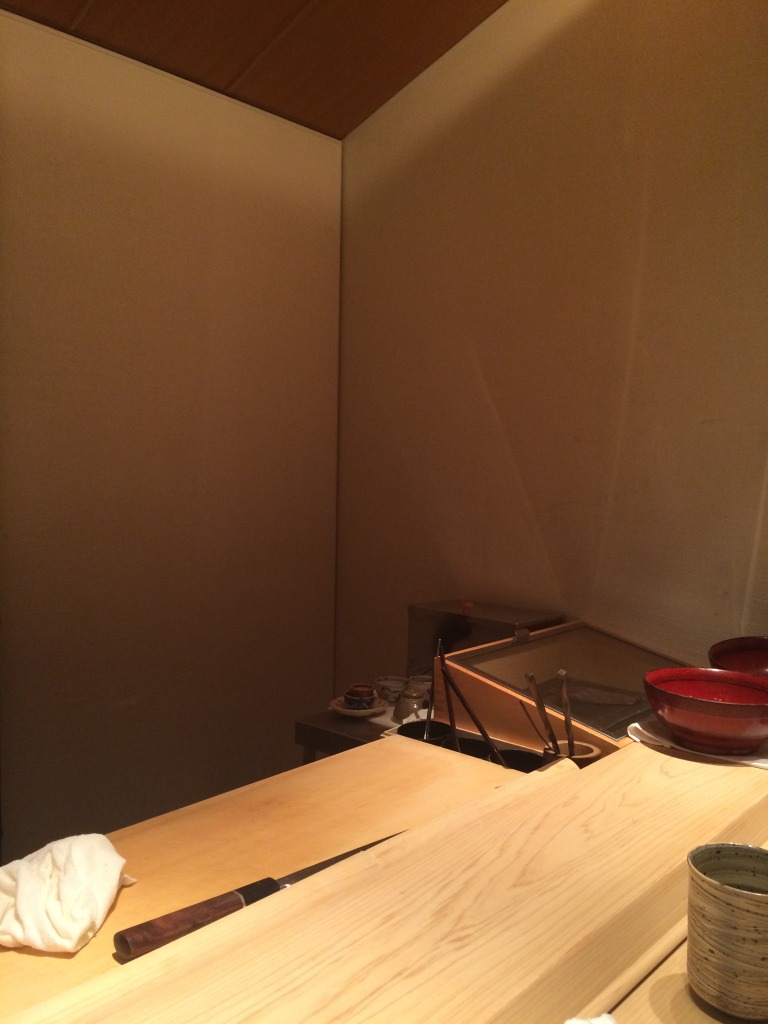 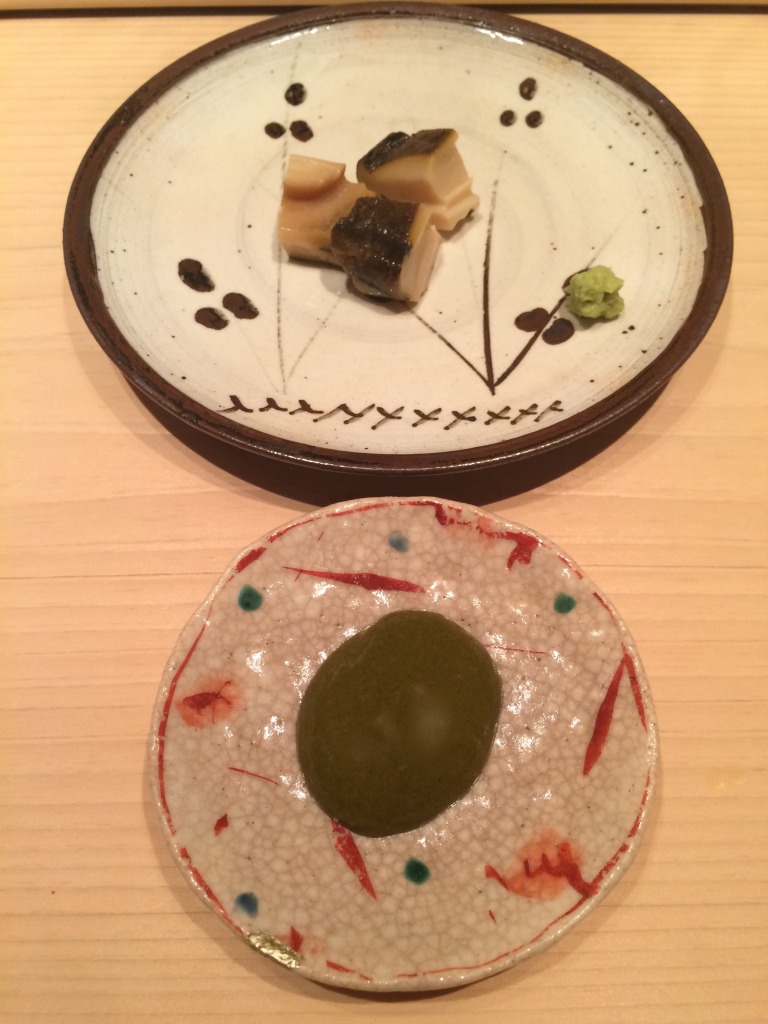 This eight-to-ten seats sushi counter differs significantly from the legendary ultra-casual Sukiyabashi Jiro Honten, which serves some 20 courses of nigiri omakase in less than 20 minutes. Unfortunately, Jiro’s medialized sushi had become the ultimate fast food for millionaires, and this is why I prefer Yoshitake where you will be treated as an honourable guest having at least two hours to spare on his sushi counter.
Since Jiro is charging a very high price some diners might be disappointed for the lack of creativity, innovation and time reserved for your enjoyment, the qualities Yoshitake possesses. It is important to mention though that it is the chef’s skill with the knife and his ability to get the best produce that is the most regarded in a master sushi chef. The top hats can only be thus found in Japan, in Tokyo as the sushi’s birthplace in particular. 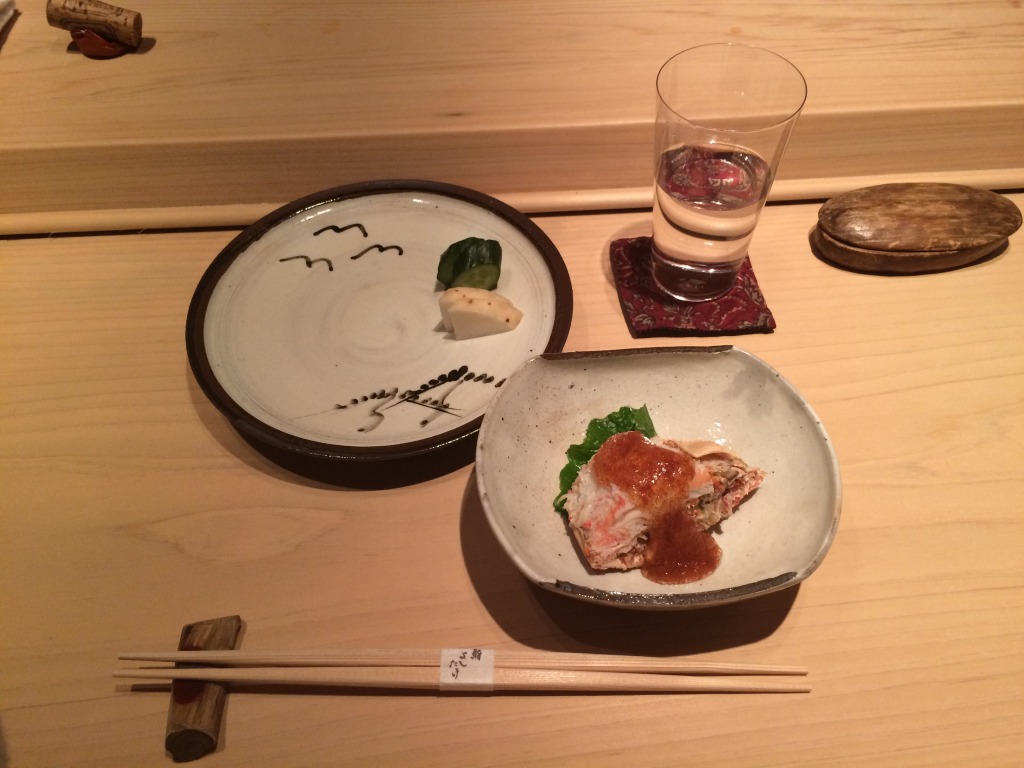 While acquiring top produce on the daily auction at the Tsukiji market, the chef’s skill is being assessed in terms of technique and appearance. Yoshitake ticked all the boxes for the inspectors as well as for picky diners like me. He not only has these thousands-hours-honed skills, but he had imprinted his own stamp in the highly competitive empire of Tokyo sushi establishments. 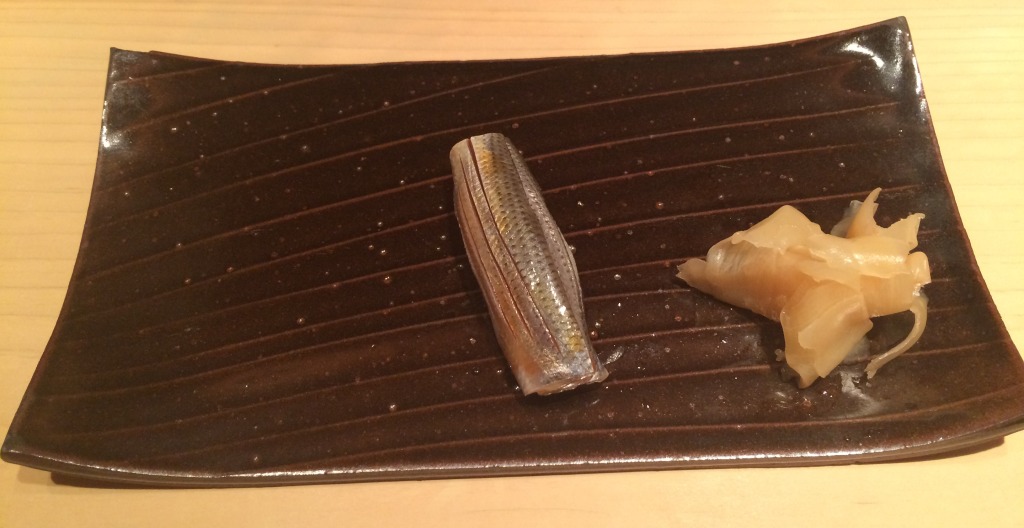 Some sushis remain simple showcasing only their pure nature while in others the fish is slightly marinated. The Mackerel benefitted from being marinated in vinaigrette, reminding me of the herring served with pickles in Scandinavia. This North Sea evoking glistening silvery fish looked as if it jumped into a costume from the Star Trek film series. The chef also made a Mackerel roll more appealing, adding a zesty shiso leaf and crispy roe inside turned it into a one bite delicacy.
The Hokkaido uni that can be found year around was presented in two textures and two servings, on a bun of rice and wrapped in a sheet of crispy seaweed. On the top the more mature, dense and defined uni, while underneath an almost liquid, but like a raw egg-yolk rich and complex composition of intense fragrances.

As is common for sushi, the most fit drinks are beer or sake, but wine is increasingly also being offered. The wine selection is typically limited, but thoughtful. Champagne, Burgundies, but also some New World wines that caught the palate of the chef comprising the refined selection. Once we had a bottle of a village Puligny-Montrachet, a smart choice of a well-rounded unfiltered Chardonnay with white flowers, green apple and mineral freshness. 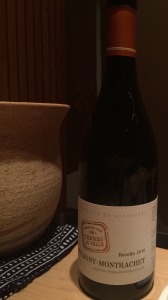 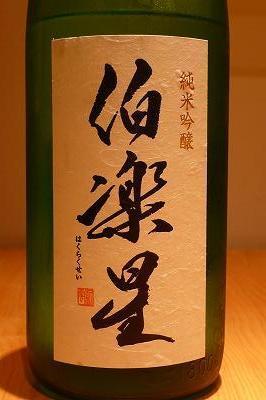 These days we prefer sake with sushi. The choices are limited but span from driest to the sweetest and fruity. We like the middle ground that is balanced, full-bodied, and smooth, often unpasteurized sake consumed cold – the daiginjo style, in which over 50% of rice is polished away from the kernels during its production. The above sake fits our taste.
Although it is tough to get a seat at a three-star restaurant in Tokyo, a last minute cancellation (100% must be paid when the reservation is made) and establishing personal contact with the chef, who remembers your name, are key to success.
Address: 3F, Suzuryu Bldg, 8-7-19 Ginza, Chuo-ku, Tokyo
Contact: +(81) 03-6253-7331
Opening hours: Only for dinner from Mon-Sat: 6 pm first & 8:30 for the second seating. Closed for holidays.
Credit cards ar accepted and there is a 100% cancellation policy from the previous day of your reservation.