Giacomo Conterno was at his time ahead of the other producers of Barolo. Inspired by his father Giovanni, who was one of the first Barolo producers to bottle his wine and not just selling it in casks, he respected tradition while making necessary improvements to better the wines he produced. The library-like, in brick and wood encrusted tasting room, flashes out the humble respect for knowledge gained through experience, in contrast to blind trend worshippers catering to ever-changing leading markets. For Conterno at least sticking to tradition and respect for history was rewarding, as his wines are cherished as the best in the world. 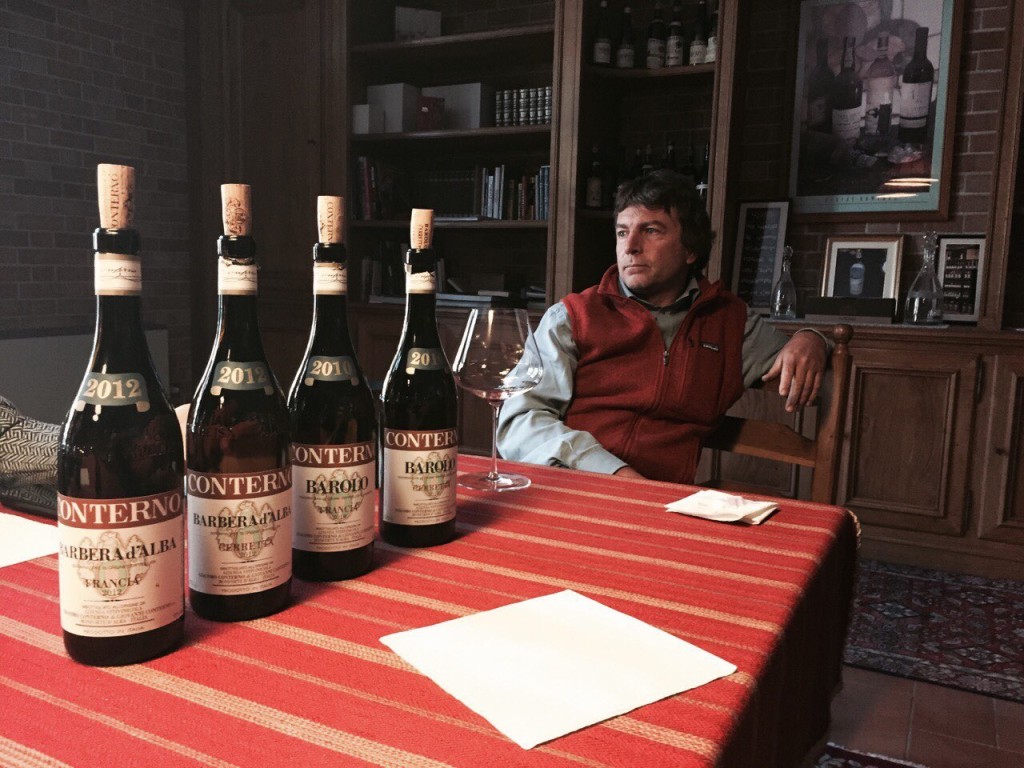 Once Giacomo inherited the winery, he further pushed the qualitative limits of the production practices to increase the quality and extend the ageing potential of his wines. After his brother Aldo split from him in 1969 and founded his own, more modernist, estate, Giovanni later brought his son Roberto on board, and since his death in 2004 Roberto has been in charge. His grandfather Giovanni was also the brain behind abandoning selling Barolo in cask or demijohn, uprooting its misconception as a wine for early drinking, when by extending the grapes’ maceration time and ageing the wine in large, old wooden botti for long period, he extended the wines’ longevity and increased their complexity.
Today, there are not many traditionalist winemakers in the Barolo appellation like Giacomo Conterno. Giuseppe Rinaldi, and Maria Theresa at Bartolo Mascarello, both of whom I also visited last fall, being the most recognised rarities. 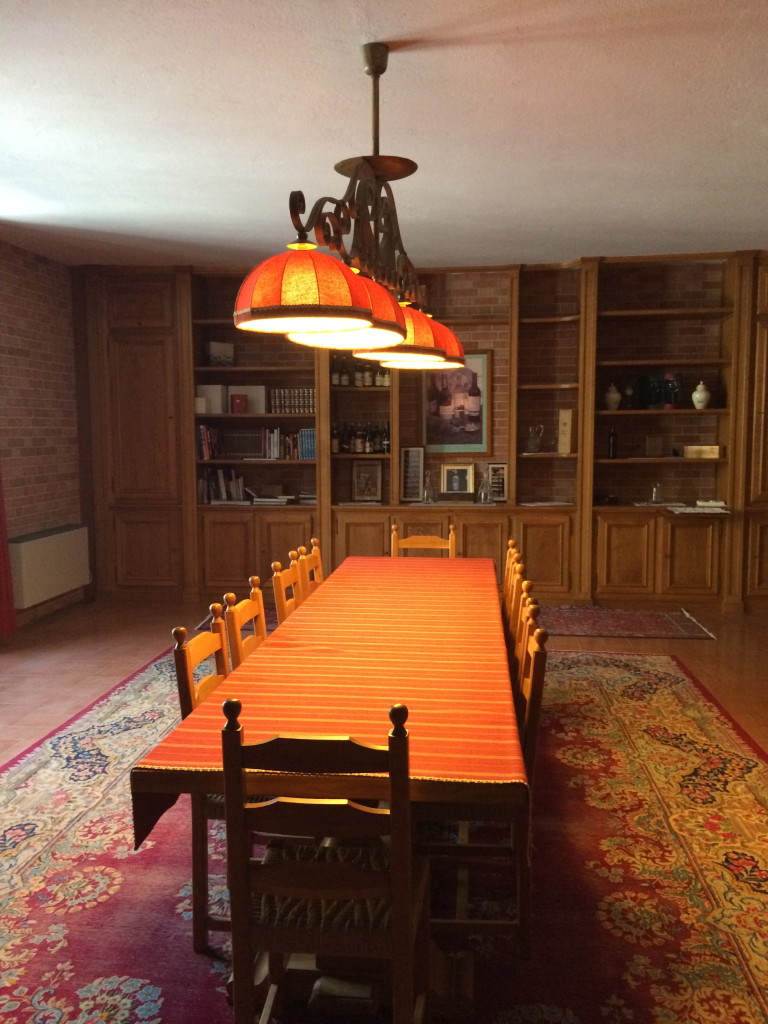 All Conterno’s wines are red and based on the noble Nebbiolo or the more refreshing and much sooner approachable Barbera. Nebbiolo’s name comes from the Italian word “nebia” meaning a fog. The cool autumn mornings often mysteriously hover the Piedmontese valleys with a carpet of a fluffy fog, so the name for the grape was born. The finished wines’ colour tends to fade only a few years after the vintage, quickly transforming itself into a brick orange veteran. Yet, this façade is only to deceive your eyes, since the wine continues its slow transformation into a complex and rich aged Nebbiolo. And this magic doesn’t lead to a more gracious results than in the wines produced by the Giacomo Conterno winery. 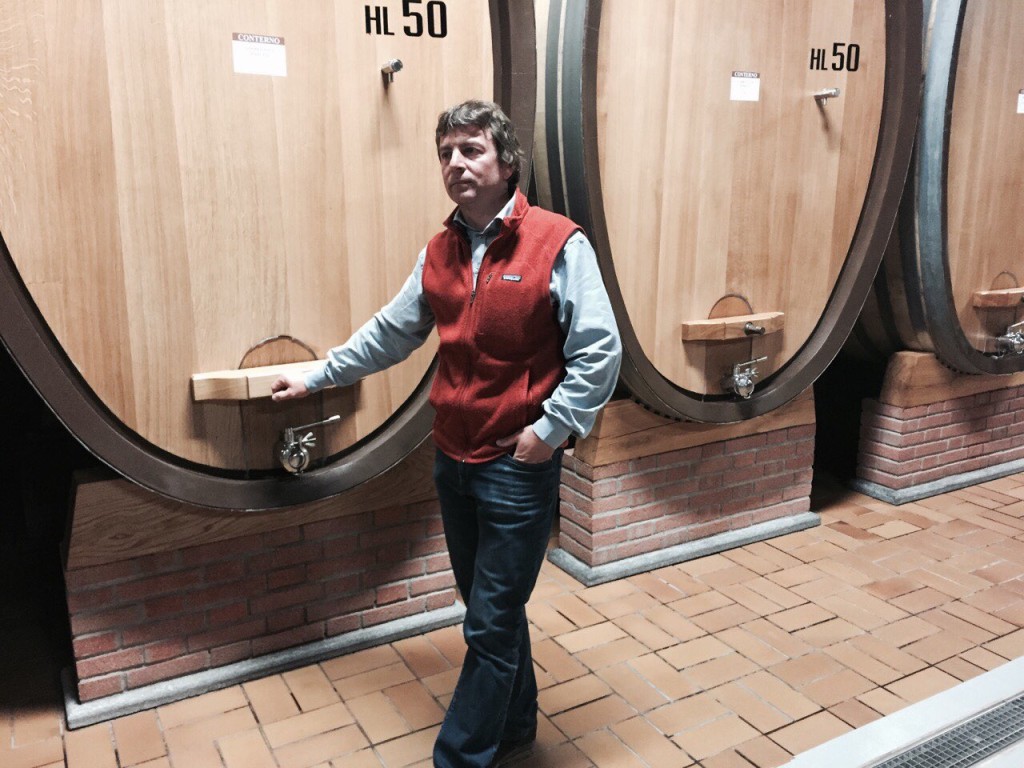 As most of his contemporaries Giacomo Conterno, did not own any vineyards, but in 1974 he purchased a precious southwest facing land of Cascina Francia in Serralunga d”Alba, that is until today the main source of grapes for the cantina’s highly regarded wines. Out of the eleven Barolo villages, Serralunga d’Alba, is one of the biggest communes. The winery makes two famed Barolos from this organically tended vineyard: the Cascina Francia and the superb Monfortino Riserva. Recently, the estate has added a third Barolo, Cerretta, also from the Serralunga area, bought in 2008. 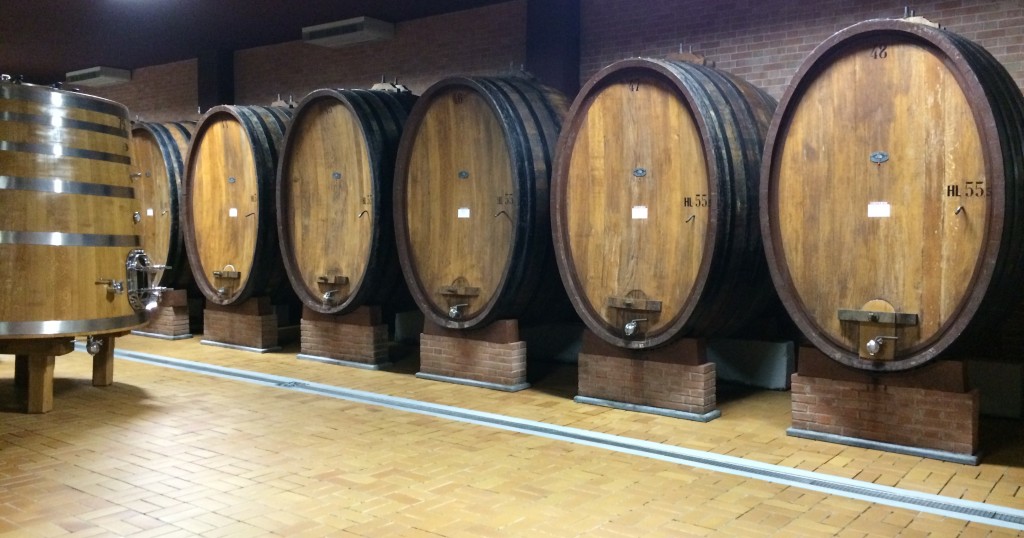 Where in Piedmont you can drink the best Barolo?

At the winery we tasted he Barolo Cascina Francia 2010, and later at the local winemaker’s favourite casual osteria Vinoteca Centro Storico in Serralunga we savoured the more approachable 2005 vintage. This year yielded lighter, earlier drinking wines because of rainy weather in September, resulting in softer tannins. It is challenging to taste traditional Barolo that is younger than 10 years, and in the case of Conterno it is generally agreed that one better waits 20 or more years before opening. The older vintages are much harder to find and very expensive, but the advantage of visiting Piedmont dwells in accessibility of wines like this. Locanda del Arco in a tiny settlement of Cissone is one of the great restaurants with superb well-stocked cellar, and it is worth dining at for any serious wine lover. Vinoteca Centro Storico in Serralunga has also superb selections and you often see the winemakers and owners themselves opening precious bottles of their older wines with the generous Piedmontese home fare served there. 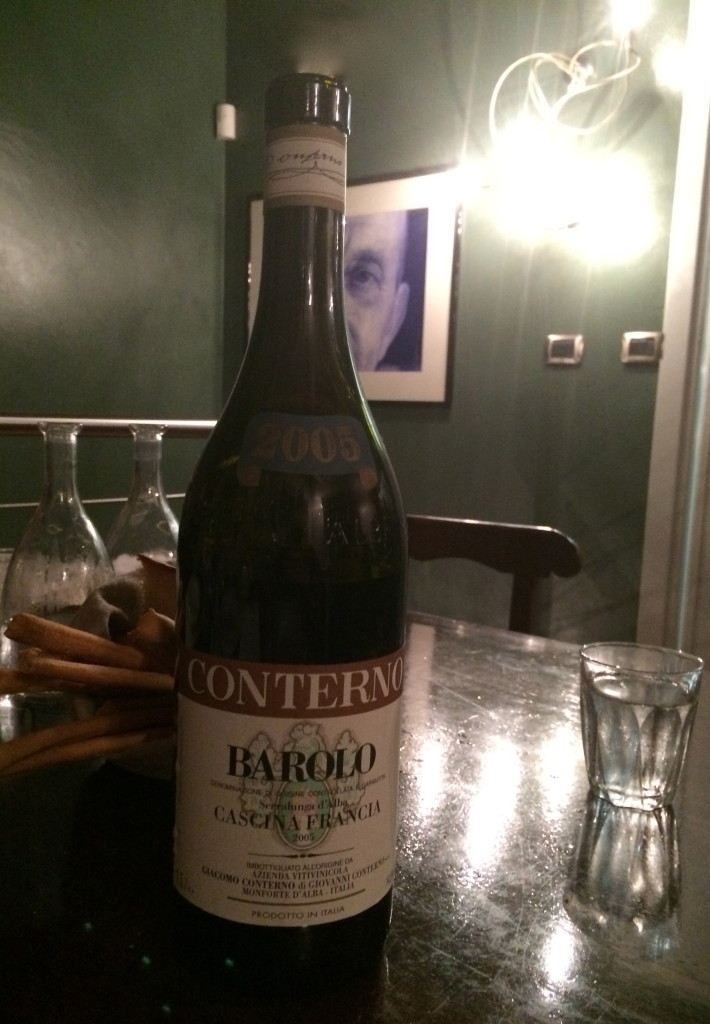 We also tried Barbera d’Alba Cerretta and Barbera d’Alba Francia, both from the 2012 vintage. In the case of Barbera, waiting is not a problem since these fruit driven, more smooth tannins and lower acidity exhibiting wines are popular for earlier drinking and lunch. Conterno’s Barberas are highly individual and more rewarding than most simpler Barberas, so unless your plan on a special lunch, include them into your dinner plans in Piedmont. They cost much less than the Barolos.
The winning horse of the Conterno stable remains the Monfortino Riserva, that is produced only in exceptional vintages such as the 1996 and 1990, and is aged for about seven years before its release. Named after Monforte d’Alba, where the winery is located, this riserva is still considered to be one of the best wines in the world. 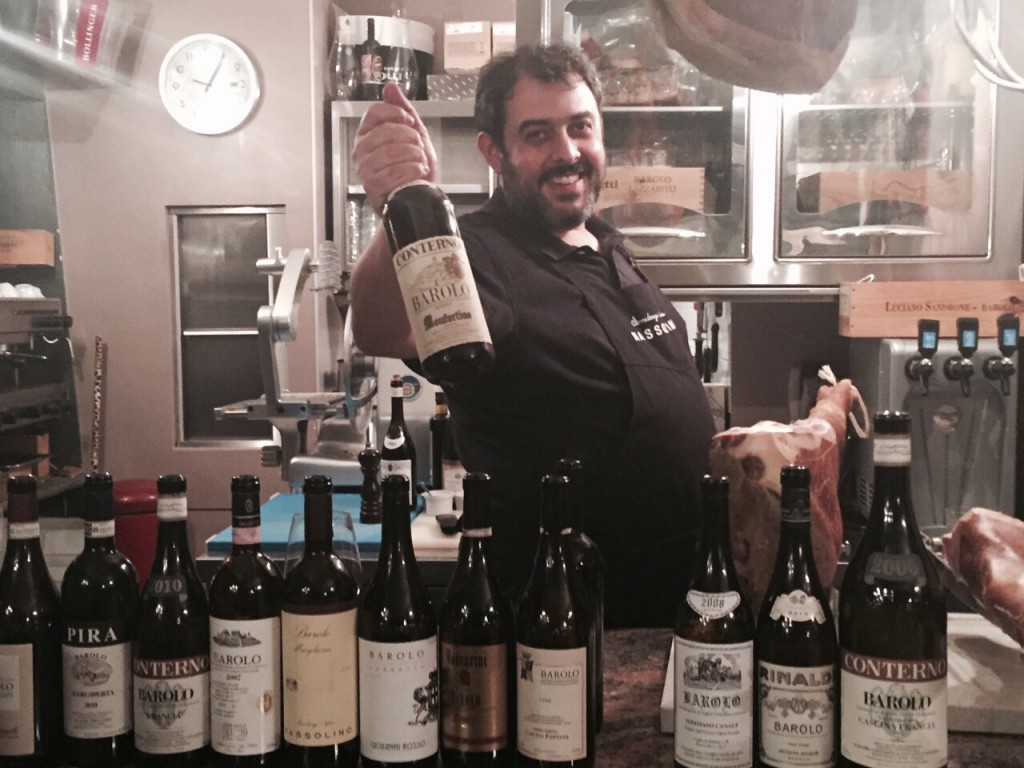 Leaning towards tradition, while implementing sound practices of modern winemaking, Roberto Conterno crafts Barolos with realistic integrity without sacrificing generations worth knowledge of his father and grandfather. The global appeal and ever-increasing demand for his wines reaches well beyond the European and the US markets, now also intriguing the Asian palates.
Monforte d’Alba 12065, Italy.
+39 1 73 78 221