Balsamic vinegar is a vinegar made by cooking the grape must (defrutare in latin) so it is reduced to about one-third. Unlike a wine vinegar that is not heated and transforms on the room temperature into a vinegar with the help of the natural yeast present in the wine.
Generally, any vinegar is made by bacteria converting fermented liquids (wine, rice wine, fruit cider, …) into a sour solution. The word itself comes from the French “vin aigre”, literally meaning a sour wine.
Acetic acid is the distinct sour component of any vinegar. During fermentation, the sugars in the solution are converted by the bacteria into alcohol. 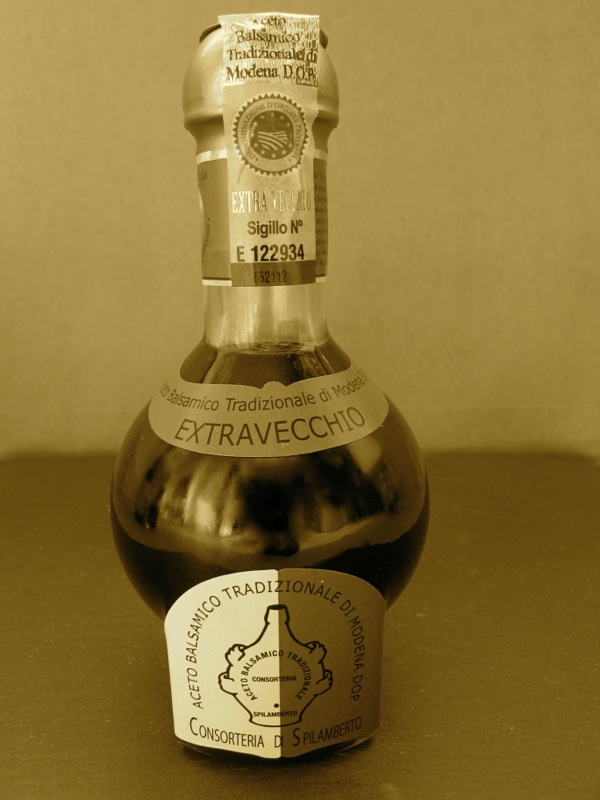 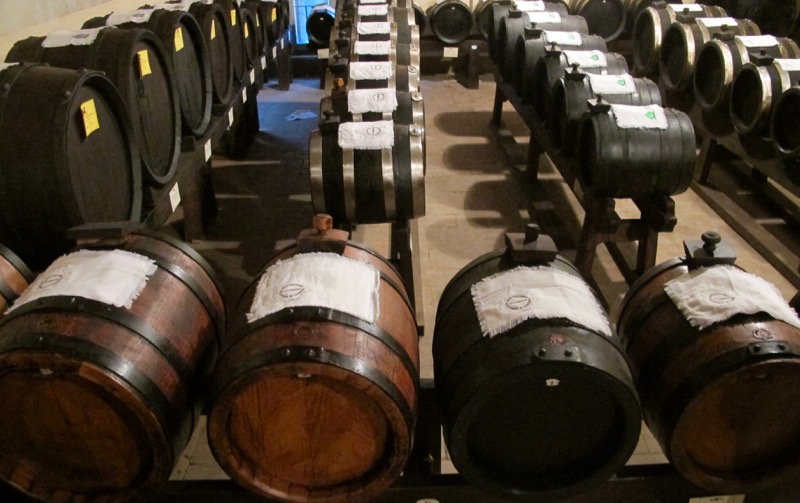 Vinegar was made as early as 4000BC by the Babylonians, who first fermented apricots, dates and figs. Egyptians and Greeks learned this process of vinegar making from them and the latter passed it on to the Romans.
In the affluent area around Modena families were making a much thicker, elaborately aged condiment, that became later known as the balsamic vinegar of Modena. The evidence suggests that the Egyptians were allegedly making balsamic already around 1000BC, yet not through such a complex process of barrel ageing as the families around Modena later did. As the noble families around Modena adopted the traditional process, the local vinegar became desired luxury of the Kings and other high-ranking families in Europe and Russia.
The main difference between the Aceto Balsamico Tradizionale di Modena D.O.P. (ABTM) and other balsamic vinegarettes (including white made by pressurized cooking and aged in uncharred barrels) is that, while the latter take months and rarely years to make, the ABTM requires decades to evolve before it is released for consumption. The D.O.P. (Denomination of Protected Origin) rules 12 years minimum for the “younger”, and at least 25 years for the “extravecchio” noble vinegar, both sold the in characteristically shaped (thus in the first sight protected against the limitations) glass bottle. 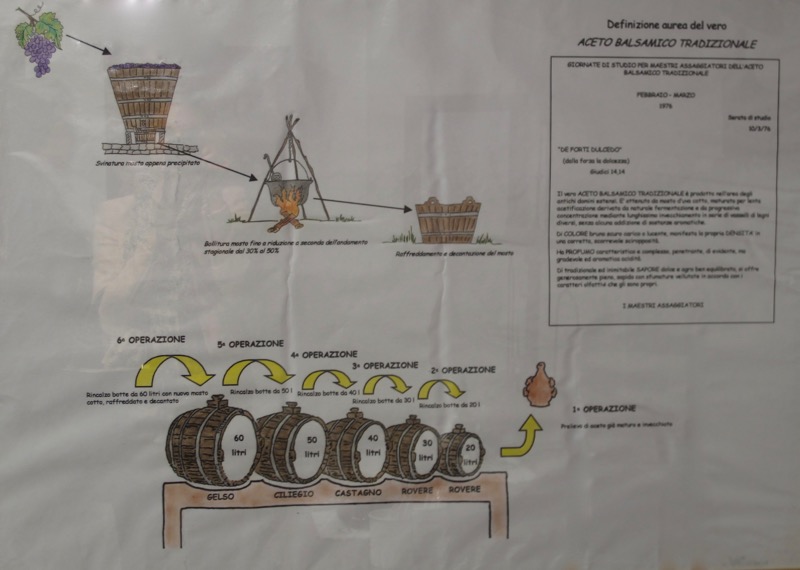 Further, the cheaper and less complex Modena-style balsamic vinegarettes are often made by mixing the wine vinegar with “sapa”, which is the sugary concentrated reduction acquired from cooking the grape must. These can also be enhanced with herbs, spices, and other additives altering the flavour. Also, the barrels do not need to be a battery of various woods, but single wood barrels adding characteristic flavor to the resulting product. For example one traditional balsamic producer – Leonardi – makes sweet and sour condiments flavoured with juniper and cherry woods as well other altered balsamic vinegarettes like the aromatic truffle. They also make Balsamic Vinegar of Modena IGP (Indicazione Geographica Protetta), that is also a mixture of wine vinegar with cooked must. The Italians do not make the labels simpler, by no means! Young Modena-style balsamic vinegarettes are aged between 3-5 years, while the middle-aged from 6-12 years. 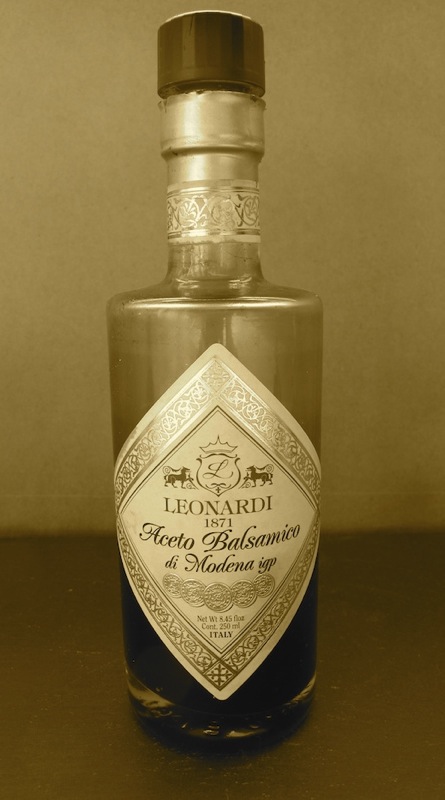 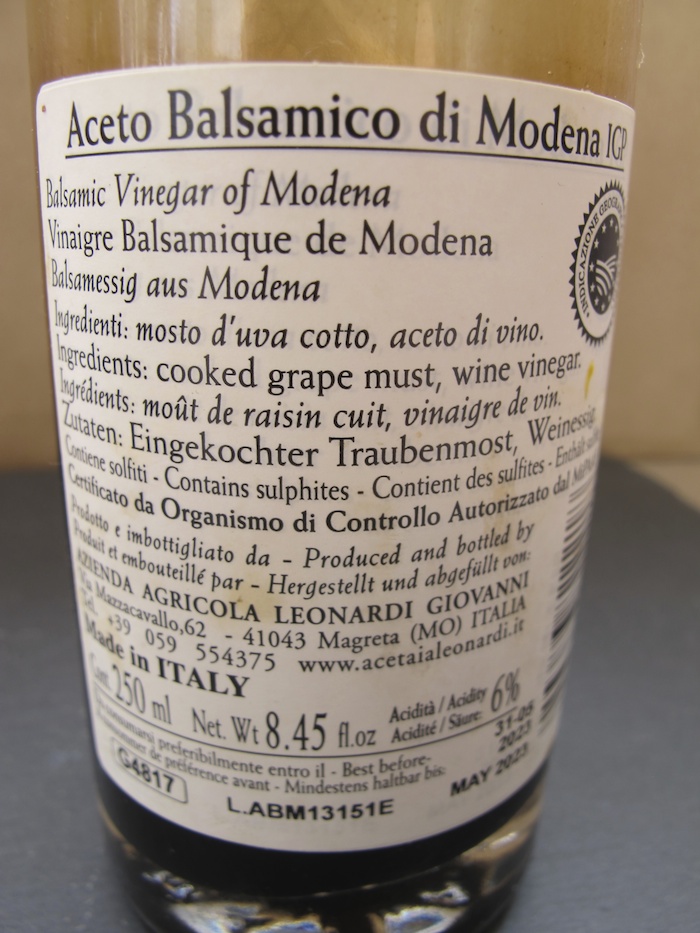 The traditional balsamic from Modena is made only from the local grape varietals such as the white Trebbiano and reddish Lambrusco and in lesser amounts also with Ancellotta, Sauvignon, Sgavetta, Berzemino, and Occhio di Gatta. The colour intensifies and the flavour continues to evolve during a lengthy aging in the increasingly-sized old barrels made preferably from mulberry, chestnut, and juniper wood. Similar to the solera system in making sherry in Spain, the barrels of different sizes are topped up from each other over the years. The oldest, being the smallest, always receives topping off the ageing vinegar from the barrel next to it that is slightly bigger and this proceeds until the biggest barrel with the youngest cooked must. Contact with the oxygen is necessary for the evolution so a small hole on the top of each barrel is left covered just with a cloth preventing insects entering the attractive aromatic solution. 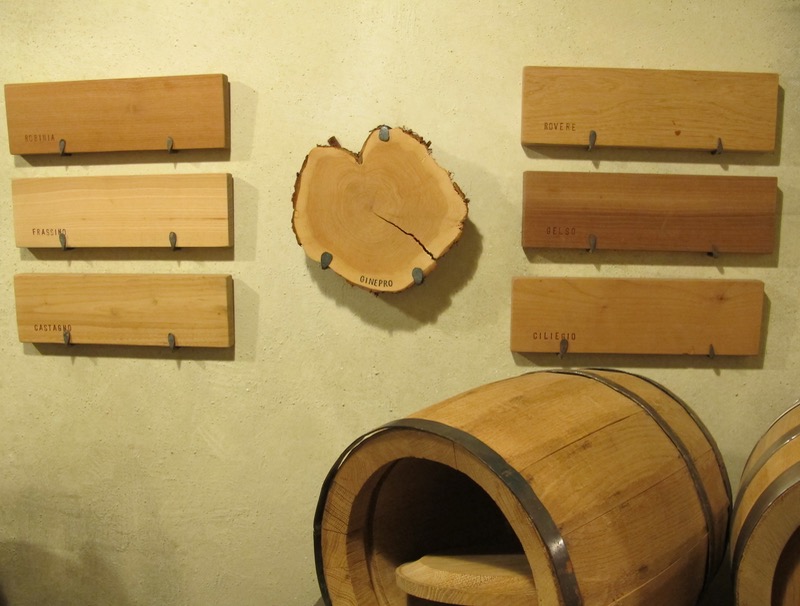 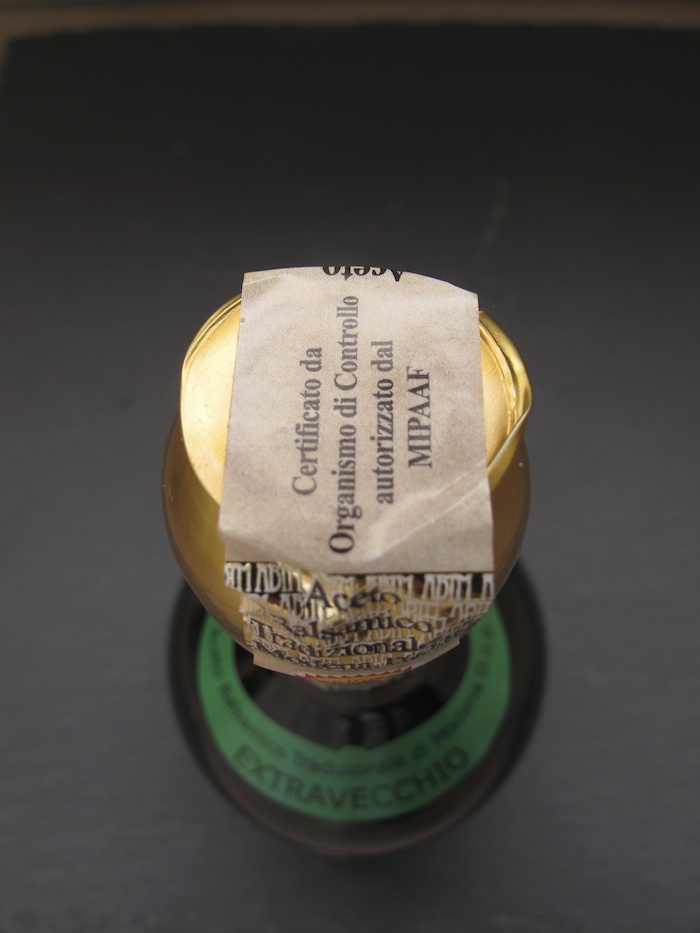 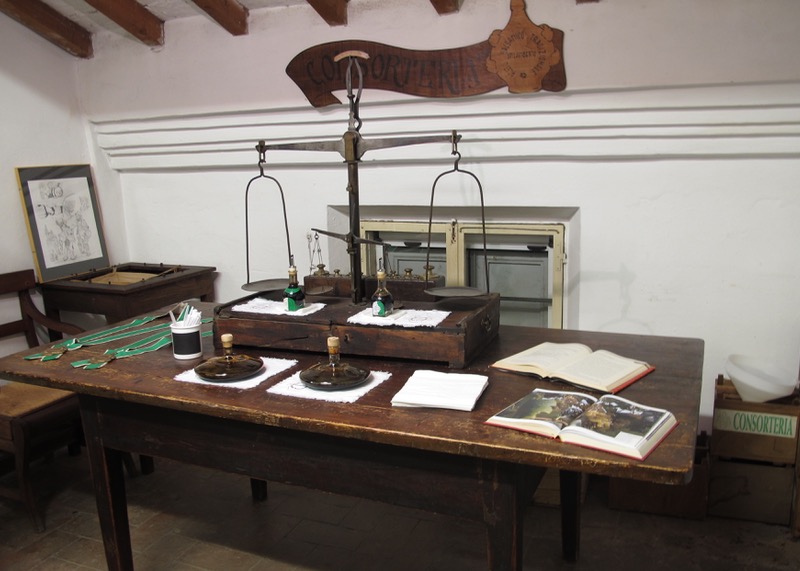 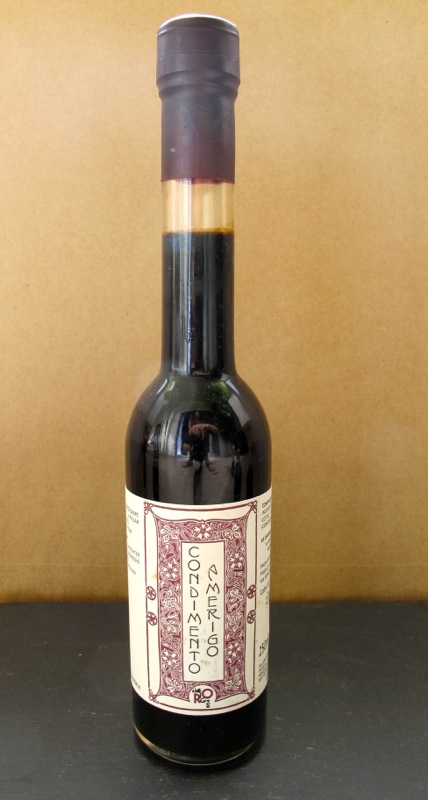 From the endless types of vinegarettes available on the market today, the Aceto Balsamico Tradizionale di Modena is the most prized, and the cost can approach around 100 EUR for a tiny 100ml bottle. These vinegarettes improve with age, with some being more than 100 years old. There is no need for such long ageing, though. Like with a high-quality wine, the properly aged balsamic vinegar is best after about 25 years, but then it lasts for another decade or more after bottling. The older vinegarettes sound fancy, yet they are more like a syrupy dessert than a more sophisticated delicacy. The quality of the raw material – the grapes – determines the quality of the vinegar. Then high enough alcohol, sugar and the flavour of the wine affect the taste.
How should a top quality traditional balsamic vinegar from Modena taste? Rich texture lends to a velvety smooth balance between sweetness and acidity. The other vinegarettes will have the acidity shouting from the background. Like a great bottle of well-matured Bordeaux, the ABTM is elegant, subtle yet memorable with a long aftertaste.

Vinegarettes do not offer much nutritional value, but they were used as medicine in the past and as digestives after a meal. Possible allergies from naturally occurring sulphites should be considered. In modern vinegarettes, sulphites are also added to inhibit the growth of undesirable bacteria. For centuries vinegarettes were used as beauty products to soften hair or practically  to clean stains.

The white balsamic vinegar is used in meals where the dark color of the traditional balsamic is not wanted. The simple rule can go like this: the higher the quality, the simpler food pairings. Pour it over an aged Parmesan (Parmigiano Reggiano), foie gras, caviar, sour green apples, … the other younger vinegarettes can be used as condiments on salads, to marinate meat and fish and in dips. The medium aged highlight risottos, vegetable dishes, seafood, various cheeses, can be poured over fish, meat and even desserts like a fresh fruit salad. The sweet “condimento” characteristically sweetens ice-creams, ripe strawberries, and panna cotta. Any type of balsamic invites for a personal exploration of preferred combinations. For me, thick slices of at least 30months aged Parmiggiano Reggiano with over 10 years aged balsamic are the most pleasurable finish to an evening.

Modena native, the three Michelin-starred chef Massimo Bottura uses balsamic vinegar in his recipes a lot. He also makes his own award-winning aged balsamic vinegar, that after tasting it on a spoon I could eat as a treat after dinner or in between courses on its own, how perfectly balanced it was. 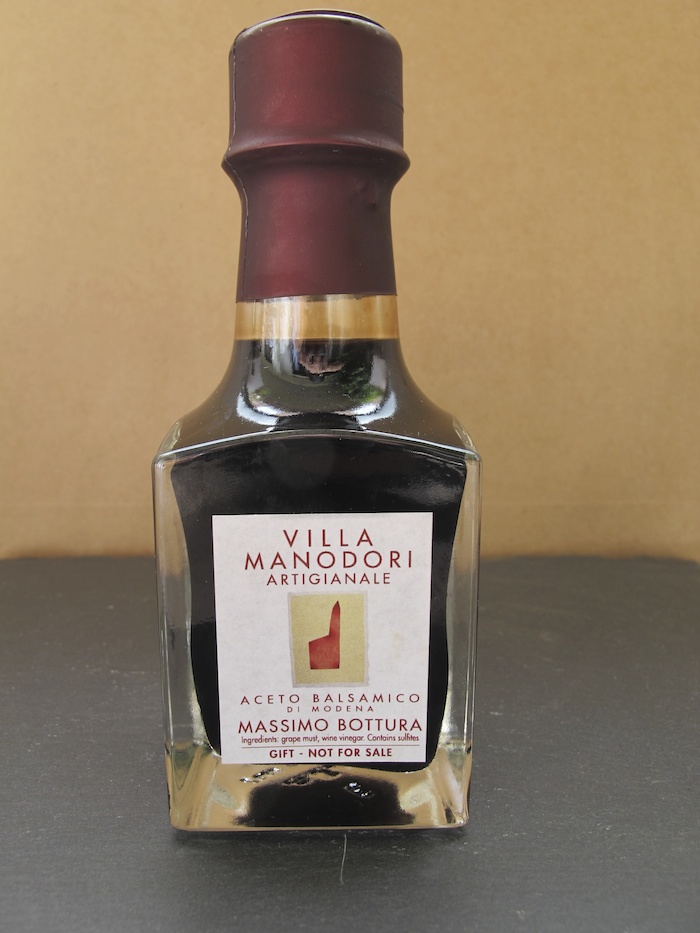 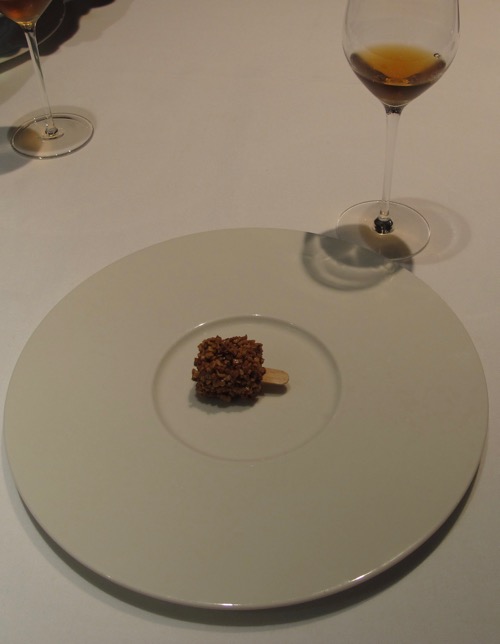