The magic keys to success that unlock the potential of the perfect dish à la Ducasse are the INGREDIENTS themselves. As the chef writes: "Cooking is a love affair, it's all about falling in love with your ingredients."

Alain Ducasse has always acknowledged the essential importance of raw ingredients in his culinary mastery. Although the past decade took him more frequently around the world as he oversees his gastronomic empire of restaurants, chocolate boutiques, publications and other commitments of the modern top chef, he spent most of his life on the coast of the Mediterranean and the fragrant hills of Provence. 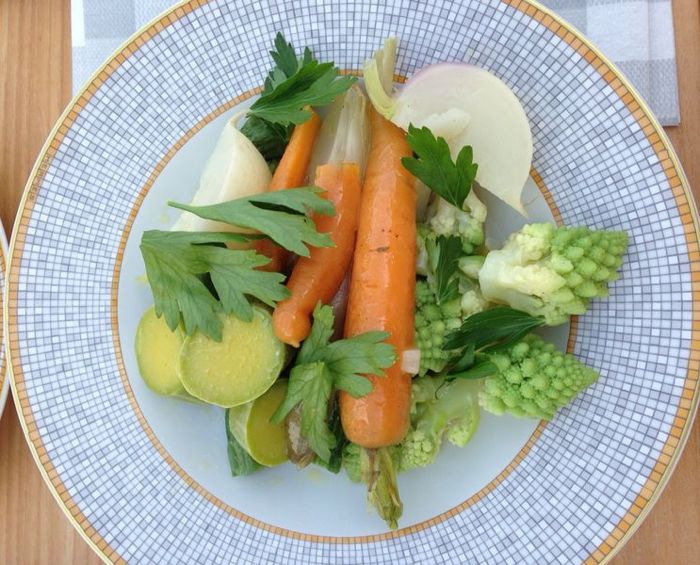 An abundance of superb quality ingredients from artichokes, tomatoes, through truffles and olives, has formed the health-promoting Mediterranean diet, and Ducasse did not escape the delectable charms of the local seasonal produce. He used to frequent the market across the border with Italy in Ventimiglia, where one can find gems from the interpid local farmers. Healthful dining became naturally his lifestyle, but this was after a formative culinary training that he received from the three Michelin decorated Michel Guérard, the French guru of light gastronomic cooking, that the chef calls in the typically beautifying French “la cuisine minceur” – the slimming cuisine. Since Ducasse grew up on a family-farm in the southwestern French region of Landes, where his father was raising geese for foie-gras, he also likes using animal flesh and fat in his recipes. He limits these arteries clogging devils though and emphasizes vegetables, whole grains and local seafood at his restaurants. Adapting to the local availability of ingredients became necessary if he wanted replicate his success with his flagship restaurant in Monaco. This cookbook though is focused on his casual Mediterranean cooking, which means that its readers should check local availability of these ingredients that he uses repeatedly in his simple yet superb tasting recipes.
Nature is co-authored with the talented team of chefs from the Ducasse’s beloved provençal restaurant in Moustiers and the more fine dining restaurant at the Plaza Athenèe in Paris. The “simple, healthy and good” book is amended by comments by the dietician Paule Neyrat, herself a chef, who selected and simplified the recipes from the Ducasse’s plentiful pantry of dishes. Adapting them enough for anyone to be able making them at home had, unfortunately, turned in some instances against the accessibility purpose of the book itself. Such as in preparing the Pan-fried chanterelles with almonds and lemon, the cook is required to use “fresh almonds“, but what are these? Are you supposed to go pick them up on a tree or buy them still encrusted in their green shell? What types of almonds? It should be specified that these are unroasted almonds. 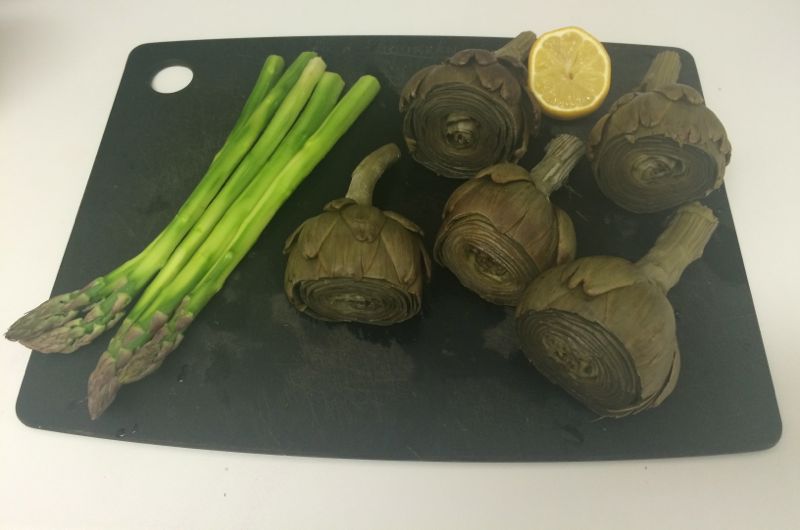 Consistent with the book’s tagline “simple, healthy and good“, the authors do not overwhelm the reader with multi-page descriptions of any one dish. The recipes are written in a simple narrative, easy to grasp for an experienced cook.
Further to her credit, the dietician pinpoints the nutritional benefits and possible traps. For example, when amount should be considered if the meal is to fit the healthy nutritional definition. The chef gives away some of the wealth of his experience behind the stove as he advises on the possible substitutions making the recipes more flexible. If you cook at home enough, and are not a total beginner, you will end up with a delicious and highly nutritious meal. The magic keys to success that unlock the potential of the perfect dish à la Ducasse though, are the INGREDIENTS themselves. As Ducasse writes: “Cooking is a love affair, it’s all about falling in love with your ingredients.”
The PURPLE ARTICHOKE AND GREEN ASPARAGUS TAPENADE TARTINES are excellent. You can miss adding the tapenade on the slice of bread before serving since it is delicious just like that as well. 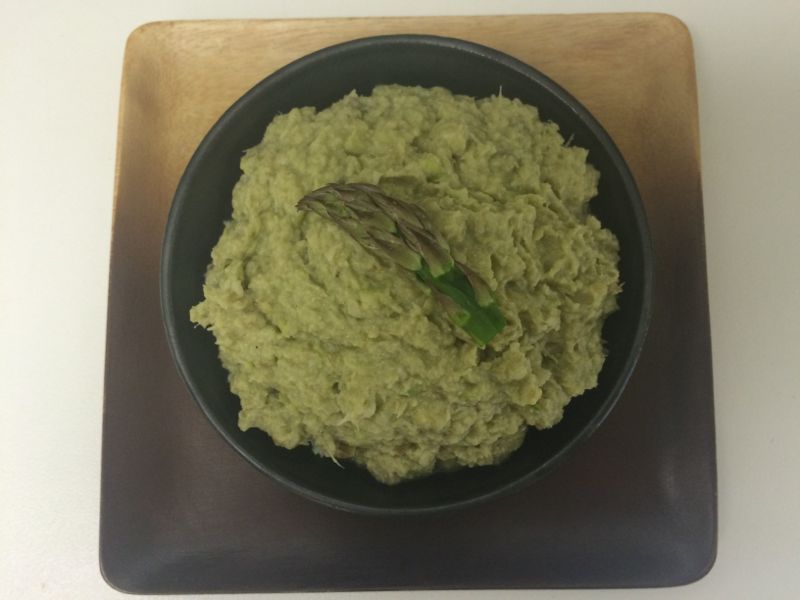 Some recipes could have been made healthier. The SPRING AND SUMMER VEGETABLES AND MUSHROOMS EN COCOTTE one of the chef’s signature preparations, can be improved by replacing the bacon with a splash of olive oil and soaked chipotle pepper, which adds the cured meat flavor without the bad cholesterol. The MACARONI CHEESE AND HAM WITH BLACK TRUFFLE are rather indulgent than healthy, although probably lighter than the same dish served at most American diners and steak houses. His use of caster sugar (small granulated white – processed sugar) in many dishes could also be replaced by more natural honey, rapadura (unrefined cane sugar) or coconut sweetener.
As simple as most of the recipes might look though, they can take hours to prepare if done with the top chef’s precision. Even the six-ingredients featuring GRAPEFRUIT AND MINT CONDIMENT is laborious to prepare since you have to delicately remove the skin of each sliver of the grapefruit and then bake it in the oven for 45 minutes.
There is one more improvement the book could benefit from, and it is separating the recipes according to the seasonal availability of the raw ingredients since these are so important to the chef. Like the TOMATO SALAD WITH ROMESCO SAUCE in which having the wide variety of tomatoes, each tasting differently and making the dish as interesting as it can be, depends highly on the season. Early summer in the Southern European climate is ideal for this plate. On the other hand the chef shows how to preserve the flavors of some of the seasonal produce such as lemons, garlic, and tomatoes, when he advises on stocking up your own larder with his ketchup or salt-preserved lemons. 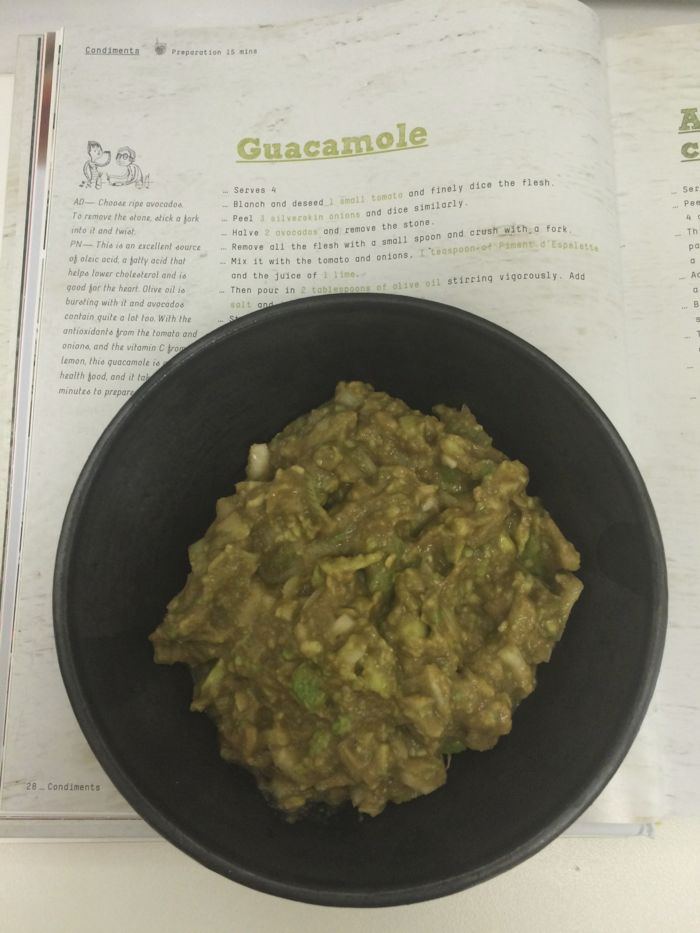 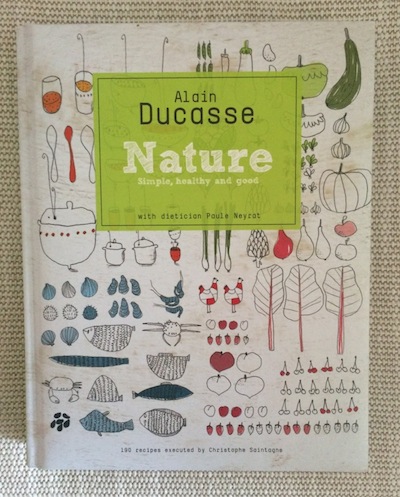 Hundreds of chefs globally (currently number one in the world Massimo Bottura, top female chef H. Darozze, and many others) went through one of the Ducasse’s Michelin stared restaurants and were deeply influenced by his philosophy streaming from this reverence of high quality seasonal produce. His suppliers, gardeners, foragers and fishermen are all also the backbone of this book, as the chef acknowledges their credit in his success. Ducasse’s clean, by nature-driven respectful approach contrasts with the recent praise of the molecular, transformative and natural produce-altering trends. Increasingly though, the consumers are hungry for authentic, unpretentious, yet skillfully prepared plates at the gastronomic restaurants. They seek fresh and high quality ingredients, where their charm dwells in their superb, natural taste. Most chefs flip and twist the pure ingredients so much that we are served hardly recognizable food with less satisfying flavors than a juicy tomato in its peak season would have. A pinch of coarse salt and a drop of freshly pressed olive oil would suffice to impress our taste buds.
The cartoon-filled cookbook is very pleasant to the eye and entertaining when skimming though. The produce and craftsmanship highlighting photographs are casual, and inspire communal sharing of food with others.
Read the full chef’s profile here.