Dirt Candy, as its raunchy name evokes, is once again back on Manhattan to provoke. Teasing carnivores with its vegie-centric menu has swirled over the years of its existence into a serious dining institution, now seducing even steakhouse devotees. Delicious food prepared without meat enlightens their faith towards eating more plants.
What used to be an outlier, is now the trendiest and most creative vegetarian restaurant in New York. Its Canadian chef and founder Amanda Cohen was the first vegetarian chef to challenge the title of the American Iron Chef. Her weapon in the contest was a humble cruciferous broccoli. Facing the extremely popular and highly motivated Hiroshima-born Japanese chef Masaharu Morimoto, she did not win, but captured attention of the intrigued American public. 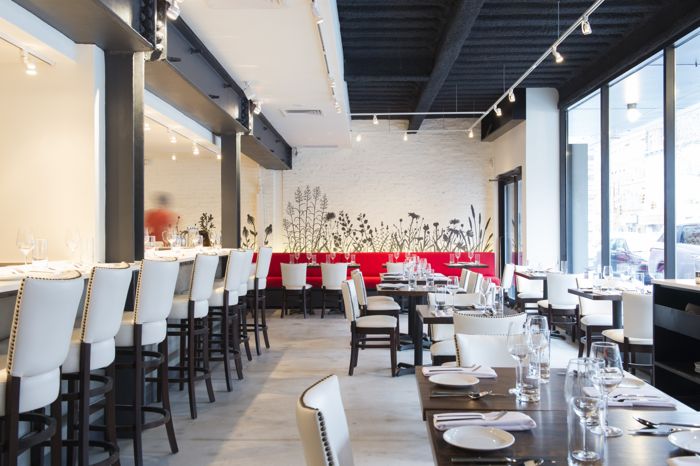 The original 18-seat vegetarian restaurant had to close down after six years of operation for high demand and reopen at the beginning of 2015 as a substantially larger space to accommodate soaring reservations. With the entire New York food reviewing scene excited about its revamp, it was a miracle that I managed to get in. On the very first day, when the reservation lines opened, I secured a seat for two at 5:30 pm (probably the earliest dinner I have had to date).
It was a messy, rainy late afternoon as we arrived at the hip, East Village situated restaurant. Some early walk-ins were snacking and imbibing on fashionable superfoods-juiced cocktails at the bar, the ready-to-race staff was lined up on the starting line, so far outnumbering the diners (from the original staff of eight at the old place, it expanded to 32). The action fired off about an hour later as the garden-walled and comfortably decorated bright room with ecolitious plant paintings was rupturing with beehive hum. There was not a single table left even at the bar, that is generally welcoming to casual walk-ins.
No wonder, since Dirt Candy not just challenges the established fish or meat-focused gastronomic dining, pleasantly surprises, but also satisfies your taste buds as well as appetite. All that without the fuss of a typical haughty Michelin-stared establishment. Its cool and modern outfit is buttoned up by the waiters’ knowhow of the animal-friendly assemblage on your plate. The honesty and slight rebelliousness shows in their sourcing. When asking about where the ingredients come from I was responded: “Our dry goods are organic, but we don’t go out of our way to do the local and organic dance.” Fair and practical approach. 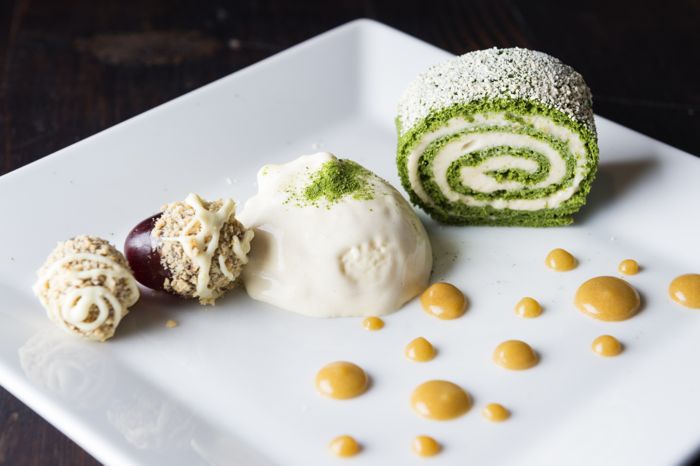 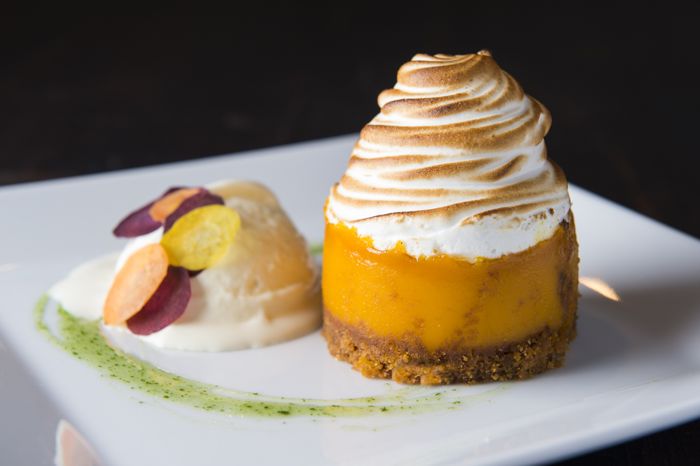 The sweet and Earth-bound name of the restaurant allusively reflects the chef’s philosophy of creating her meals. Using vegetables whenever possible and showing them in their full seasonal bloom in mostly unconventional plates like desserts, is like the stem of a flower at Dirt Candy, essential. The “Dirt” is for the vegetables growing from the dirty Earth, while “Candy” implies the almost revolutionary use of vegetables as the leading actor, even in sweet dishes.
Unlike the typical gluten-rich carrot cake, based mainly on flour and eggs, Cohen’s desserts are assembled to showcase and maximize the content of the featured vegetable. The chef relishes in shocking its diners, garnishing some desserts with a bunch of refreshing greens or dehydrated carrots.
The Dirt Candy’s desserts are all made with vegetables. Not entirely, and some are not vegan, containing milk, but the roots, leafs and bulbs form the spine of each sweet dish. First, the sound of it might not appeal to your taste buts, but trying one does not kill anyone (although sugar is used in most of them so diabetics should inquire about other options). Just looking at the pictures or neighbors’ plates will make you salivate. You can also spot them in the chef’s comic cookbook, Dirt Candy: A Cookbook, that is the first graphic novel cookbook to be published in North America. The Celery Cheesecake and Carrot Merringue are fascinating, and on their own a tempting reason to dine at Dirt Candy. 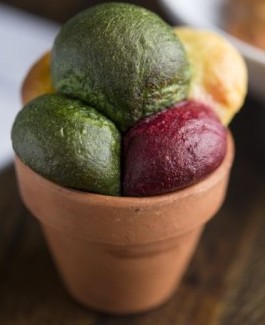 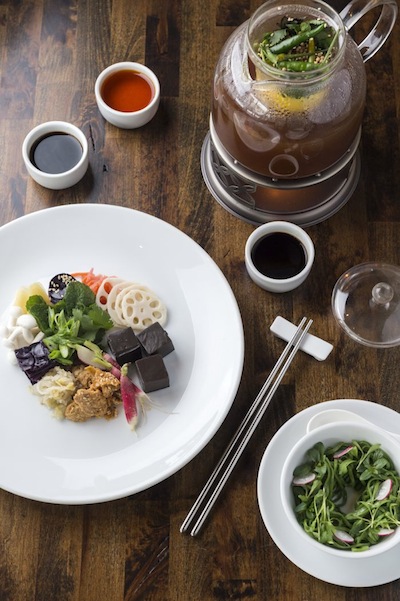 The dishes are of the Michelin caliber, very creative, using top quality produce and artfully presented, each as a composition of complex flavors. As the colorful bouquet of bread was served before our order, we were like kids curious about the flavor of each bun – should I pick the green, the purple or the bronzed yellow? Each white-flour-based ‘balloon’ of the “Monkey Bread” was flavored with a different vegetable, a truly engaging take off!
Starting with the “Mushroom” appetizer of portobello mushroom mousse with sautéed Asian pears, cherries and a truffle toast we were tuning smoothly toward Dirt Candy’s bring-the-world-of-flavors-all-together creative station. Then came the Indian-styled “Cauliflower” in a Curry with Green Pea Paneer (Sheep’s cheese), Papaya Chutney and crunchy Pappadam bread. It was a nice dish, yet the weakest from all what we tried there. I know many Indian chefs making better vegetarian curries. It is a tough contest with the country’s entire culinary culture based on vegetarian meals.
The “Carrot” was pulled, pickled and jerked, then served with peanut mole sauce atop carrot waffles. Not a light dish, but delicious and satisfying. 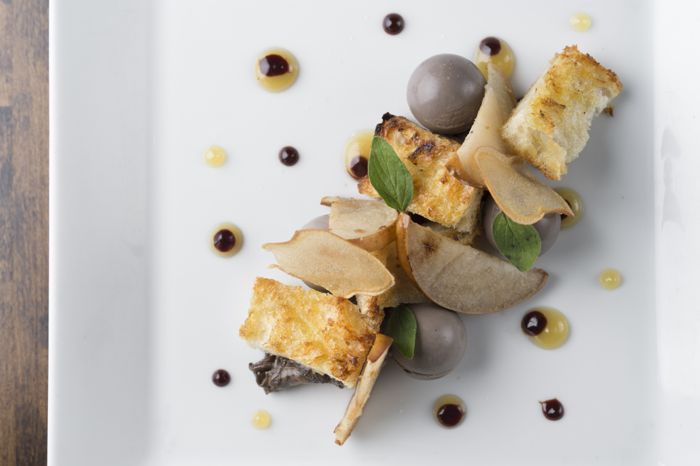 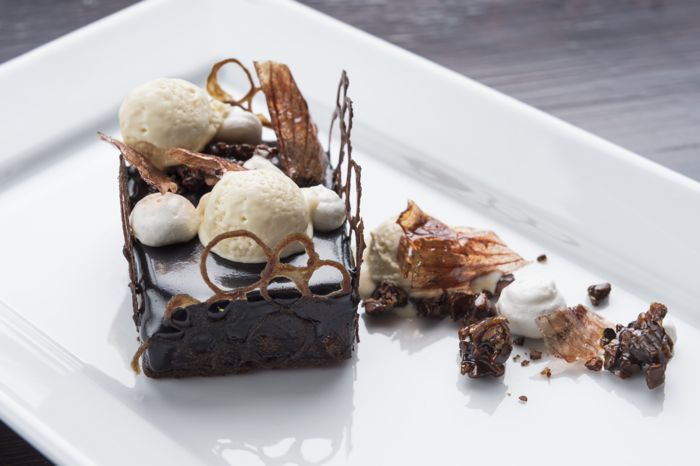 Sharing the famous “Brussels Sprouts” still joyfully roasting themselves when served in front of you on a hot lava stone, not just created a “wow!” effect on our table, but they indeed are also supremely delicious. The sizzling sprouts were accompanied by Tex-Mex inspired condiments of homemade smoked avocado, pickled red onion, salsa verde, jalapeños, sliced radishes, lime, cream and tortilla strips, and lettuce wrappers. As you wrap the “tacos” yourself, it also becomes more fun. Even meat lovers, like my husband, that would rarely go to a vegetarian restaurant for dinner, was happily munching on these novelties and eager to come back. Ms. Cohen, this is what I call success! Since, for all of us, eating less meat is better not just for our health, but also for the animals’ welfare. 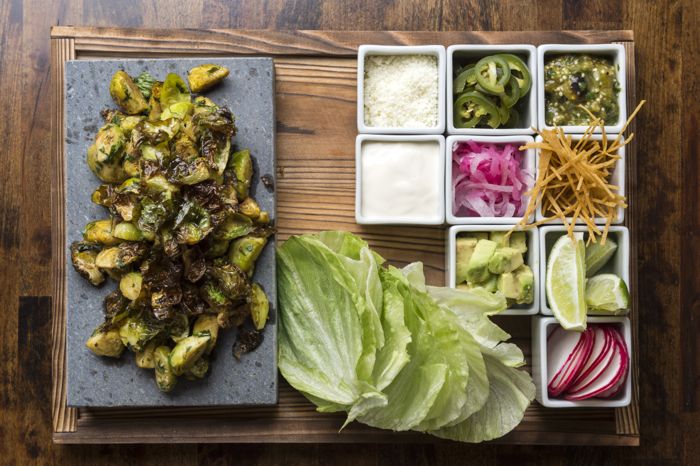 Natural wines in the spotlight

Along with some non-alcoholic blended options and a limited selection of teas, a small but focused wine list as well as classic cocktails such as G&T are offered for a more indulgent evening out.
The wine card features interesting global pickings of organic and natural wines from out-of-the-radar places like my native Czech Republic (Jaroslav Osicka and his blend of Chardonnay with Pinot Gris was the most pleasant wine-by-the-glass I tried there).
Natural (without any additives and with a minimum intervention of the winemaker – meaning low or zero added sulfur, unfiltered, unfined), organic and biodynamic wines can, when manipulated incorrectly, sour your mood if you are not used to some of their sensitive “natural” characteristics such as slight fizz and unusual yeasty aromas. There are some that are excellent though!
Knowing the quirks of natural wines, I asked for a taste of each before firmly ordering. Since most of the wines on the list are served by the glass and even a half-glass, it is very practical for any consumer, in particular in the generously pouring style in America. There was even a non-alcoholic German “wine” on the menu, so go for it if you are driving in the traffic wildness of Manhattan!
Dirt Candy strikes a perfect balance for the serious gourmets, vegetarian or carnivores. The restaurant stirs your curiosity, pleases your palate and is refined enough that only a very experienced chef could have created it so perfectly at home. Vegans, allergy sufferers and diners with other dietary requirements are encouraged to mention their restrictions. So far the restaurant has been open only for dinner, but lunch and brunch are on the horizon.
Check their website for updates.
Contact: +1 212 228 7732
Address: 86 Allen Street, New York, NY 10002
Opening hours: Tue-Sat: 5:30 pm – until when the last table for 11pm reservation leaves.