"Good food cannot be reduced to single ingredients. It requires a web of relationships to support it."

Going against uniformity and celebrating diversity of our food systems

Dan Barber is a New York state based, multiple awards winning chef at The Stone Barns Center for Food and Agriculture and the Blue Hill restaurant in Manhattan, but also a bright, sustainability promoting activist and the author of Third Plate. This superbly written book is constructed from the bricks of his unpublished essays on the future of food. 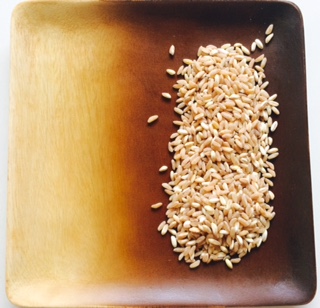 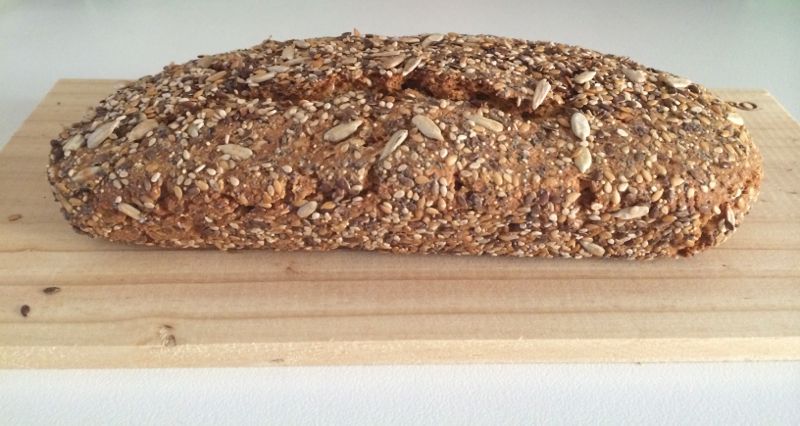 Ten years in working, The Third Plate is a must read for anyone who dines out, is interested in the farm-to-table development, nose-to-tail eating, for any forward looking chef, a good house wife – anyone who cares about high quality food. Writing with a wit, while including entertaining stories from his travels and dialogues from his encounters with extremely experienced and motivated farmers, breeders, chefs and other food experts, makes its 447 pages accessible to anyone. Personally, despite growing up around my family’s farm, I learned a lot about responsible agriculture. The farmers’ observation of nature and its behaviour seems to be the winning recipe for sustainable food production.
The book depicts a conscious evolution of Dan Barber, a chef guided by his infatuation with farm-to-plate cooking. Formed through the accidental encounters as well as delegated meetings with farmers, breeders, and revolutionary chefs, Barber’s affair with best tasting food intensifies. From his native North America his lust takes him to a dehesa in Spain, where he is fascinated by an award-winning, “natural”, suffering minimising, foie gras raiser, a traditional “good fat” containing Iberico ham producer, further south he marvels at a truly sustainable fish farm and challenges a legendary chef Ángel León, celebrating his love of the sea in his cooking at Aponiente.
The author was also inspired by environmental writers like Aldo Leopold, whom he often quotes, organic farmers Eliot Coleman and Klaas Martens, modern food system critics Michel Pollan and Wendell Berry, whose shivers causing comment that “How we eat determines, to a considerable extent, how the world is used” might tickle your consciousness. Seed experts like Steve Jones resurrecting old breeds (New England Eight Row Flint corn) or breeding new more resistant yet tasty crops like less gluten containing and deep rooted wheat. Jones is also the creator of the Bread Lab, where he assembles a community of growers, millers, malt makers and bakers creating new tasty breads.
The book is divided to four chapters: Soil, Land, Sea, Seed. A chemicals-free healthy soil produces nutritious and tasty crops, a well managed land supportive to free grazing animals, clean sea with the help of phytoplankton and by-catch reducing cautious fishing methods such as the ancient Spanish almadraba, as well as  letting the control over the seeds out of the hands of big companies, insure natural diversity in the future. This will create “a healthy artificial system” in the service of ecology and human health. 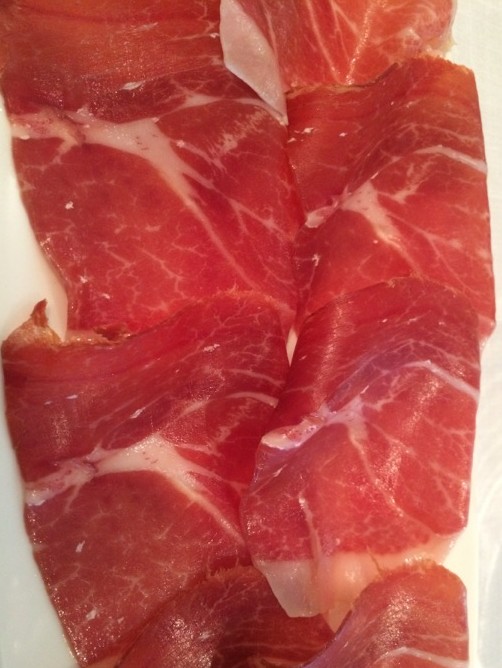 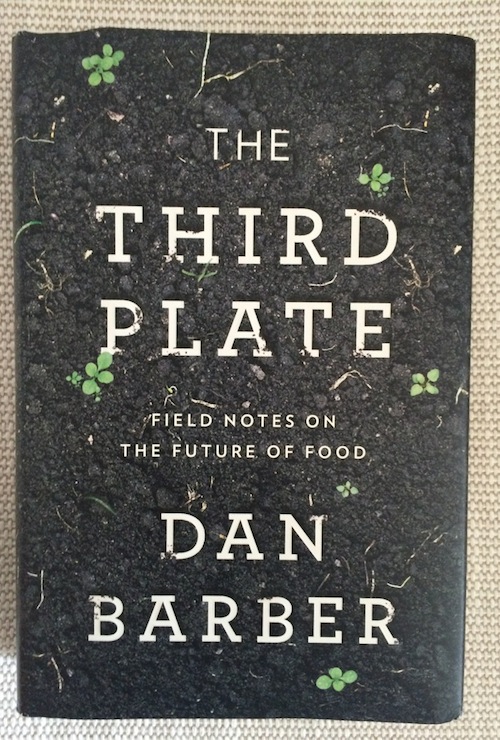 Like Marion Nestle, another US author of best selling and eye-opening consumer book ‘What to Eat’, Dan Barber realises that while securing best nutrition, conventional food is not healthy. Above all he addresses our problem with wheat, which was engineered to be annually yielding instead of its perennial nature. Our spoiled modern society requiring consistency, long shelf life and powder perfect flour, shaved off most of its nutrients, fibre, and taste (found in germ and bran), so mostly just starch from the milled endosperm remained. He sees the potential in the new “for taste grown grains”, but also forgotten loners like emmer. Also known as farro it is an ancient wheat with large root systems aerating the soil and without substantial fertilising needs, is one of his suggestions for our plates. Turning to a wide range of grains to rotate them in the field so the soil is enriched is the answer to chemical-free farming: rye, barley, buckwheat, and many other less altered “ancient’ grains.
His evolved approach recognises the fact that “for most of human history, we foraged and then, out of sheer necessity, transformed what we found into something else”, not the other way around as chefs in the last century have often concocted a recipe and then just searched for ingredients.
The currently popular farm-to-table dining is a gentle peak back at how best flavour was naturally assembled on plates – by using local, seasonal ingredients. Some European chefs, despite the fashions of conventional post-war American dining, have been sticking to small local production for decades. Alain Ducasse, the multi Michelin awarded French chef is one of them. On his menu even the signature dishes present throughout the year (like the ‘cookpot‘) change slightly according to seasonal availability.

Dan Barber goes further. In his three stages of transformation, first he realised that conventional food system is unsustainable, shifting the food production out of balance. At least monocultures, exploiting the soil and overfeeding it with synthetic herbicides and fertilisers are now out of vogue. Organic farming is not enough though. Plant rotations and balancing our plates with less desirable parts of the animal, such as cooking with bones and blood or carbonising them for barbecuing are just some suggestions that the team at the Stone Barns apply to their more integrative food cycle.
Later, the chef had shifted his focus to local farmers, demanding certain ingredients to be grown for his kitchen. Because of this, it is for economical rather than logical and soil supporting acumen, the farmer is forced to deplete the soil of its nitrogen and other natural fertilisers.
His idea for the “third plate” ripened only after years of experience and eye-opening encounters with forward thinking individuals. Creating tasty food while “supporting the environment that produced them”, Barber sees clearly the reality in ” The food chain is more like a set of Olympic rings. They all hang together.” 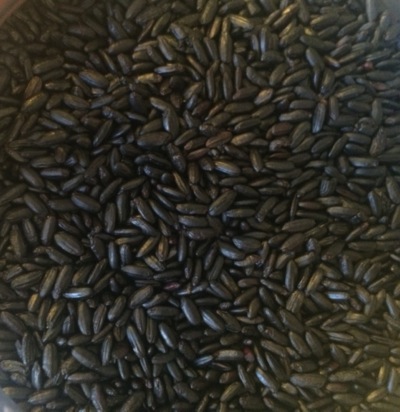 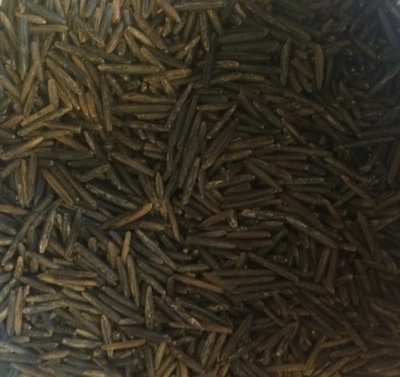 The power of the chef

Importantly, the chef realises that “Today’s food culture has given chefs a platform of influence, including the power to innovate.” Indeed, the ‘celebrity chefs’ in particular, spin trends and change our perception of what should be on our plates more often. They are now what once were the essential cookbook authors like Julia Child and Escoffier. Before them our mothers and grandmothers, both having the luxury of time in the kitchen, adapted local traditions into family meals. Food was thus part of culture, now it is globalised.
Accommodating nature into cooking seems as the most sustainable and also delicious approach to feeding our growing planet, not suffocating it with monocultures and poisonous chemicals.
The chefs today have the power to make an ingredient, like a grain (quinoa), vegetable (kale, brussels sprouts) a fish (tuna, sea bass) or a cut of meat (lamb chops) fashionable, and the author by recognising this sees the potential in influencing the eating habits of people towards sustainability. Overfishing and overbreeding of certain animals like cows leads either to their extinction or higher carbon footprint, both ultimately turning in the future against us.
Other chefs activists:

After reading The Third Plate, I was enticed to read more about agriculture. After all we are what we eat, as well as how we eat. Our food culture is essential for our health and our sense of community (belonging). Dan Barber is a mindful chef longing for the right direction of our food system so the next generations can indulge in the most delicious natural produce benefiting health as well as our ecosystem.