Now, that a vast proportion of reputable restaurants list either on their menus or websites the sources of their raw material, small farmers can applaud the chefs and the owners for marketing it as a trend and rescuing many from annihilation. The supermarket mania of decades past is over at least for the more affluent population, who shifted the bulky carts for natural straw baskets to browse on their local farmers markets. Back to the pre-war world! Now, it is a luxury to know and eat food that was grown or raised in your region. I am lucky, I grew up in a small town, where most of our neighbors grow something. They have jobs, sure, still some five to 10 years ago they could not had made living from growing vegetables on their small patches of land. The winds have turned towards the land and trustworthy supply chain, meaning knowing your producer more likely secures honest practices in his garden or farm. 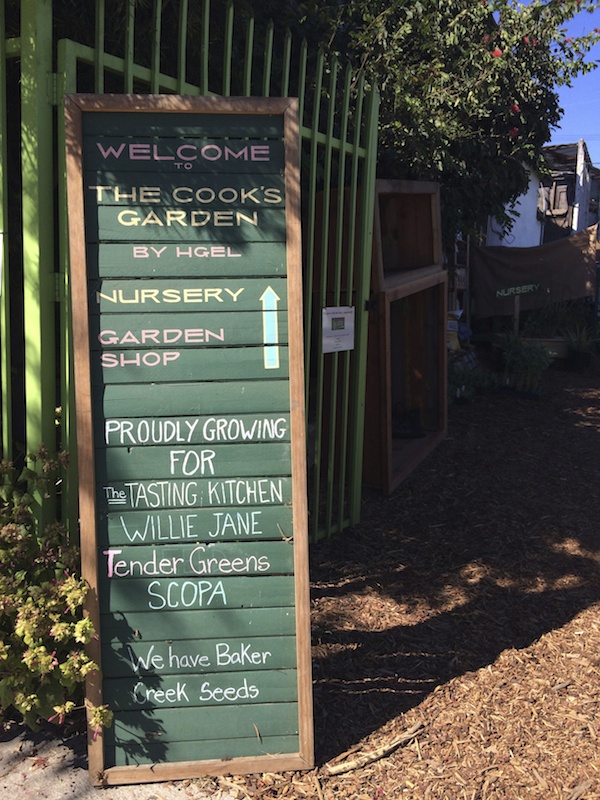 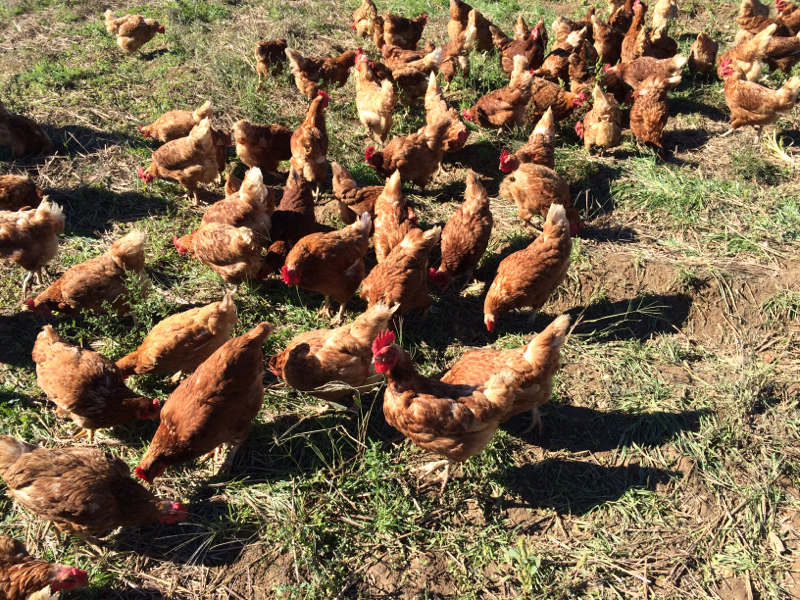 My sister and myself cannot get enough of my father’s young potatoes, Pink Lady, Jonathan, Golden Delicious and other juicy apples in the fall, cherries in May, garlic, onions,… These seasonal jewels of our gardens together with my aunt’s fresh eggs and strawberries (secured from the rogue pickers) in June save us from pesticides, and my grandmother’s cow, turkeys, chicken and pigs free from antibiotics and hormones keep our sleeps worry-free.
But what about eating out? If you live in a city or travel a lot, you were doomed to eating something that you did not really know much about. It tasted great, looked good, the ambiance was ravishing, but this is no longer enough for customers dining out today. We want our gluten-free, vegetarian and vegan options, as well as responsibly sourced fuel for our bellies. We live in a lucky decade for having access to local produce, and the smart of use use this opportunity to our advantage.
In accord with the current local sourcing trend, the chefs openly boost about their personal connections with the purveyors of their raw material, which is great news for us as we can, perhaps, try to buy some for ourselves. The chefs’ vocation, after all is about cooking and making our experience as enjoyable, worry-free, and labour-free – who likes cleaning the dirty dishes? Me not, even putting them into the dishwasher can be a huge effort. I just want to eat or have fun cooking, the rest calls for a house robot. I hope, the Japanese make one affordable one very soon!

Flipping back to the previous the page, as for a painter, the palette of colors available to him can assist in a better piece of art, so do the ingredients for the chefs. A great painter though excels in how to blend the colors available at the moment into something like an impressionist canvas. So what is the job of a great chef then? Work with what you have and make it taste and look worth your diners’ money.
Local ingredients are also tightly bound to sustainability. Eschewing the fuel-voracious planes to transport the ingredients from other continents and countries is more ecological. If people from most countries support their local agriculture, these diverse patches of the world will be increasingly self-sustaining, which also increases global security and thus peace.
Just coming back from Mexico and Colombia, I witnessed the power of the “local” produce growing from so far just a couple of seeds raising awareness and binding communities. A lavender growing program in the central Mexican state of Guanajuato brings together lonely women, whose husbands left for work in the US, while a local co-op project Via Organica brings farm produce around the charming town of San Miguel de Allende into its heart, where the locals and visitors can casually dine or purchase anything from vegetables, grains to meat and cheese.
In Brazil, Fazenda da Toca, founded by former Formula 1 race car driver Pedro Paulo Diniz, is a large-scale family-owned organic farm “changing the future of ecological agriculture by harmonizing production and preservation“. Plenty of effort goes on in the Americas.
There is a substantial difference between a large scale commercial farming and smaller often family or community owned operations. More conscious decisions about how to treat the crops and animals are more likely at the small farms. Their transparency further motivates a higher level of social responsibility. Smaller farms also have a bigger potential to grow for taste as they are able to check the quality on a smaller scale than the sprawling operations do. Still best is when the farmers themselves use part of their crops for their own consumption (like my family), so they indeed care about growing and raising the best they can, sharing their extras with chefs and customers who buy their produce either directly when visiting the farm or at the designated farmers markets.
In France, at least in the regions and at high end restaurants like these under the wings of Alain Ducasse, this is nothing new. The top French chefs had developed direct relationships with farmers, fishermen, foragers and growers long time before the world noticed. By keeping their connections with suppliers strong, they get the best produce possible and can stay ahead of competition. There are many family farms, some ran for generations. Le Jardin des Agriculteurs in the South works via social media with their followers. You can order what you need if you browse on their website or follow their Facebook page.
An Italian husband-and-wife run restaurant Paolo & Barbara in San Remo, surpassed everyone, even Dan Barber if you consider they do almost everything themselves without an international team of scientists, agriculturists and enormous staff at hand. By getting all their vegetables from their two farms, making olive oil from their olives and only receiving fish and seafood from the local fishermen they worked with for over two decades, their effort is almost heroic. The food is also superb. 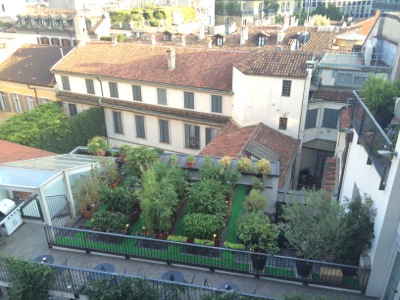 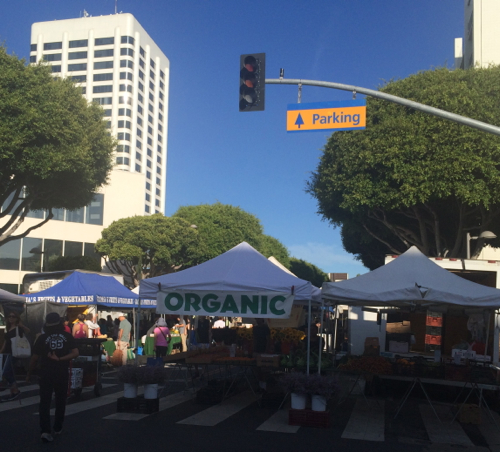 Back in our cities, urban agriculture is refreshing the roofs between the grey concrete, but also revives our gardening spirits. We are just so disconnected from nature when living in densely populated areas. Above, the snap is from Milan, and next to it is Santa Monica Farmers Market that has become ultra-popular event on the Angelenos weekly calendars.
Trendiness of the farmers markets in our cities and once again in small towns is only heating up.
As the hip Brooklyn entrepreneurs caught on, there are now farms right in the city. Just across the Williamsburg Bridge, North Brooklyn Farms shapes the sustainable future of green spaces through planting and gardening at an unused sugar refinery building. Their Sunday Supper at the Farm on Kent is vegetarian and vegan friendly communal dinner assembled from the crops grown right there. 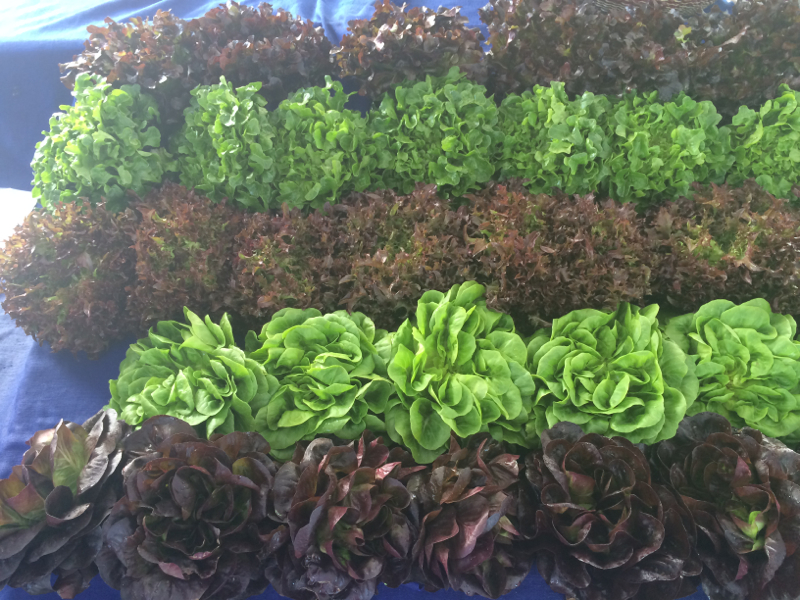 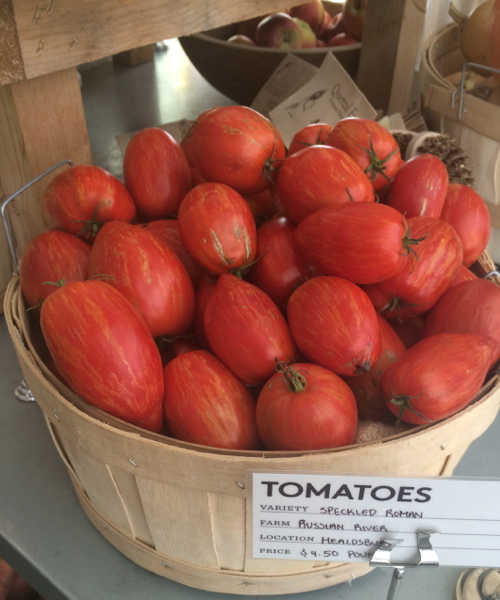 The New Yorkers grocery shopping was also revamped in the form of CSA, which means “community supported agriculture”. Farmers’ produce gets usually delivered to your door from a local farm. The ethically sound CSA has been winning more fans across America, where distrust in the large food chains spurred this phenomena. Now, more healthy plants are being included into the diets of thousands of Americans.
North from Manhattan, in Northfork, many farms like the Garden of Eve survive on the life support of the CSA. Its organic agriculture rewards its loyal customers and if you drive by you can even pick your own tomatoes.
Farm shops also grow like grass after rain. In California, the newly opened Shed in Healdsburg further educates its customers on how to cook from the seasonal produce bought there. In Manhattan and Brooklyn, the Foragers Market supplies families with Thanksgiving staples with guaranteed humanely raised provenance. Shop’ngo for pastured, GMOs, antibiotics and hormones-free New York State turkey, Cape Cod cranberries, seasonal vegetables, local dairy, eggs and regional maple Syrup. You can buy the uncooked ingredients or for convenience ready meals for as many guests as you wish.
Interestingly these trends were flown from the US. In New York, the well-established Union Square Farmers Market set the foundation for the locavore lifestyle in this giant global metropole. The city’s best chefs like Jean-Georges VonGerichten, Bill Telepan, James Beard award-winning “Chef of the Year” Dan Barber, are living marketers of the famers produce at their restaurants. Barber’s main restaurant the Blue Hill at the Stone Barns upstate New York was named by the Food & Wine magazine as one of their “10 Life-Changing Restaurants“.
The chefs as the troop leaders, and the customers following their example, all join the growing global community of the supporters of local farming. The more of us join, the stronger the movement becomes and hopefully, it will not vanish as any meaningless trend, because our food matters. 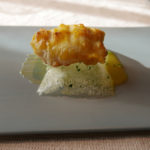 Etxebarri: transforming the Iberian seas and mountains through fire, live coal and ember wood into a gourmet escapade worth a detour 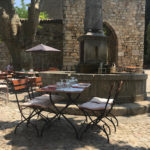 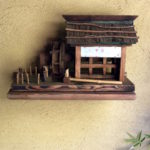 Golden Door: let in inner peace, recharge and upgrade yourself at the iconic California retreat 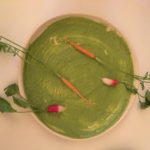 Blue Hill restaurant in New York: grow nature and encourage more of it