"Do not look, just eat, since the impressions of taste will persuade your brain that sometimes weird food is worth trying."

The youthful Japanese chef Takao Ishiya of former Sushi-Ya has worked at top three Michelin-starred sushi restaurants in Tokyo (Saito) before his  pursuit of his own seafood and rice-paved road. The Shinjuku born and raised sushi master believes in the spirit of his city and instead of venturing into the fashionable Japanese restaurants abroad, he literally holed his first start up eatery in an undefined alley inside the dining kingdom of Ginza. His new venue since 2018 is more upscale, called after his last name Ishiyama, but the food is even better. 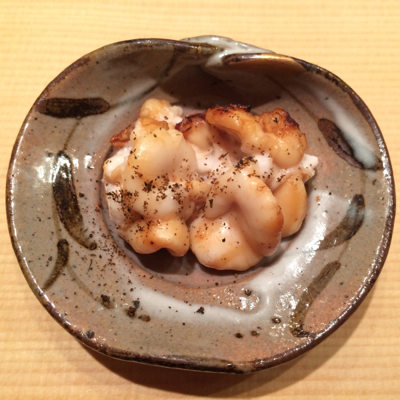 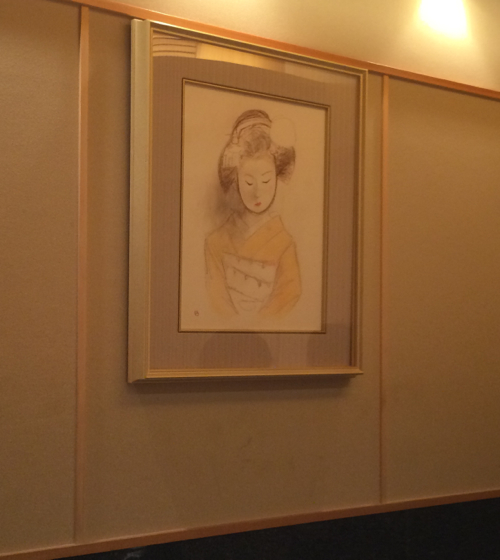 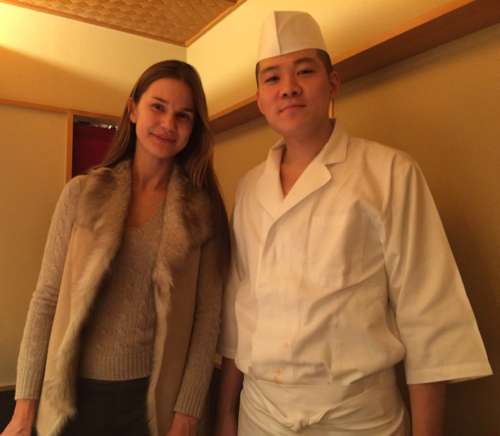 At Sushiya zipping your mouth and bowing in front of the chef as if you were visiting a Buddhist shrine, is responded with the chef’s raised eyebrows. Unlike many of the older serious sushi chefs in Japan, the young Takeo is open to talk and his good-hearted spirit turns any meal at Ishiyama into an interactive and friendly occasion.

As a foreigner, be ready for some adventurous pieces of sushi at Ishiyama. You better be a real gourmand, open to trying anything. Do not look, just eat, since the impressions of taste will persuade your brain that sometimes weird food is worth trying. Cod fish sperm (Grilled Shirako also known as Milt), sea creatures served with their livers, blood cockle, but you will also get simple but very good quality cuts of the usual bonito, fatty tuna, mackerel or sardine. 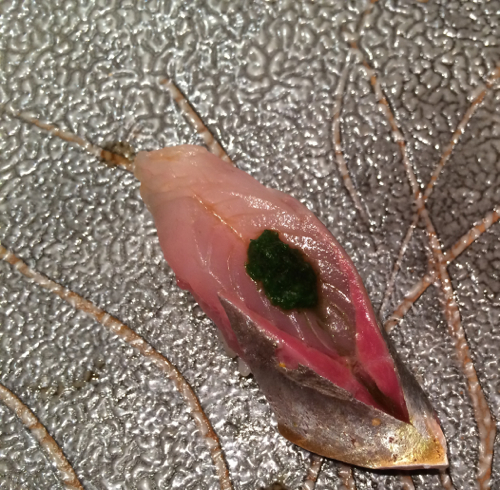 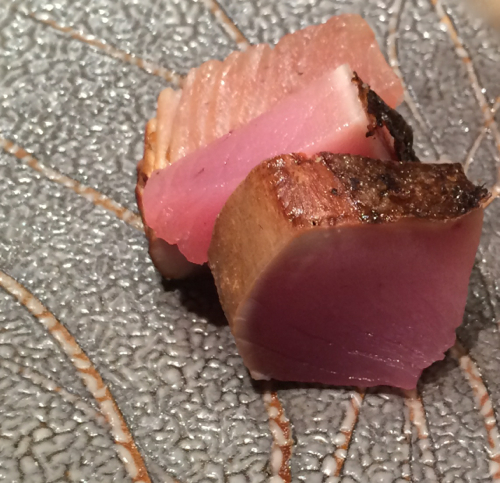 Ma-aji, Japanese Jack Mackerel, looks similar to a sardine, but it tastes more subtle. As is typical for edo-mae (Tokyo-style) sushi it is served cut in specific pattern opening the fish flesh up to diced chives and ginger. Achieving its peak flavour in summer, the fall yields more fat and smooth taste. By all the sushi chefs loved Bonito was cut and served in three levels of rawness. The feast for the palate and discovery of one fish’s potential.
Some never-seen-before items arrived from the kitchen right in front of us at Ishiyama. Co-diners from Hong Kong, ahead in their omakase, did us a great favour when they begged the chef not to tell us what that twisted baked softly textured UFO (= Unidentified Food Object) was before we cleaned up our plates. I enjoyed the rich and smooth texture of the Cod Fish Sperm seasoned with black pepper enormously, but if I knew ahead my brain would surely react with prejudice. Tasting it au nature, not covered in a tempura batter as I had it before at Rokkaku’s izakaya, expanded the boundaries of the weirdest food I put into my mouth. 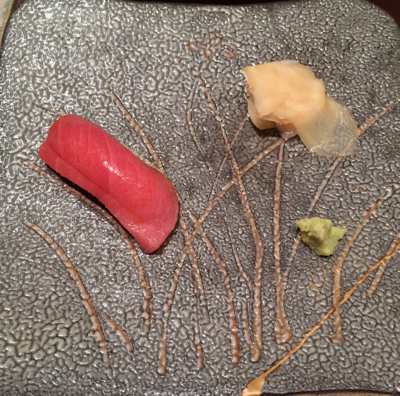 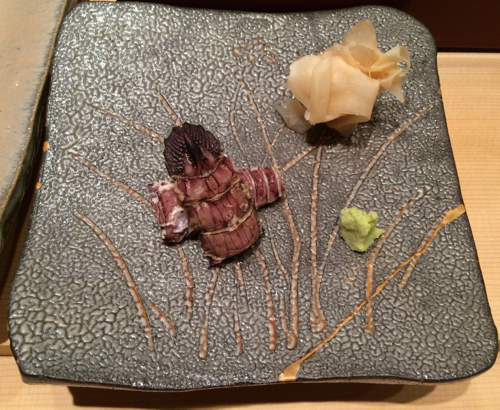 The Akagai Blood Cockle was served with its black liver. A sip of sake helped to balance the salty string of the outer membrane, while its distinct crunchiness can alienate some diners. Another less usual citizen of the sea, Shako or the purple striped large Mantis Shrimp was sweeter in the late autumn because of its higher fat content. The soft yet slightly dry texture reminded me of a crab.
Saw-edged Perch, Ara, is starting to swim onto the sushi chef’s menus in late fall, Sushiya Ishiyama including. This white wish is often served with yuzu skin, and tastes very clean. While sometimes I find it boring, at Ishiyama I enjoyed its freshness.

No foreplay, the chef went straight to serving Chu-toro, the fattiest tuna. During this meal, I learned, that there is a huge difference in how the fat can be distributed in one cut of fish, and that most chefs do not pay too much attention to this. Takeo meticulously selected evenly marbled morsel of melting meaty delicacy. Like a scoop of not too frozen gelato, slowly let the flavours unwind. Applause!
Salmon Roe, Ikura, peaking in November and most Japanese restaurants we dined at during our trip served it in their preferred way. At Sushi Yoshitake, ikura was served in a typical layer atop a rice and nori bun, but at Sushiya Ishiyama we got it straight. Subtle shavings of yuzu skin and a bowl were its only companions. No hindrance to its highest potential, delicious. 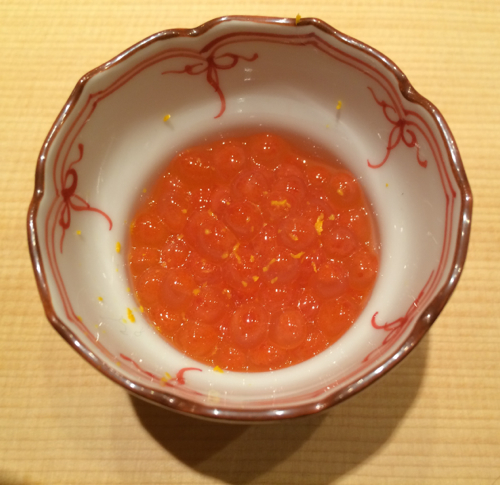 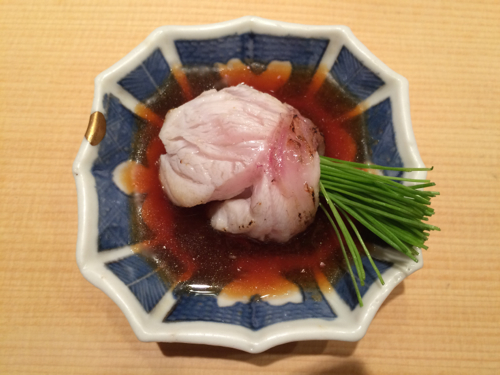 Chef Ishiyama is bold, and his love of chives reflects itself on the plates. His preferred greens are diced, chopped or wrapped inside a slice of sashimi, but only when they add something, not simply for decoration.
Anago is highly prized in Japan. The sea Conger Eel is white in contrast to its more murky river species and it was served twice, once grilled on a skewer and plated with cod liver, chives in soy sauce, and later pure, just grilled on a bun of sushi rice. Both were the best preparations of eel we had to date. 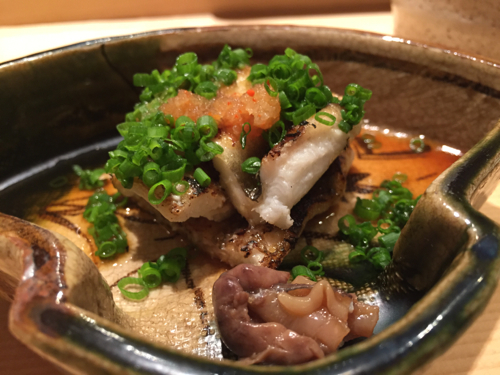 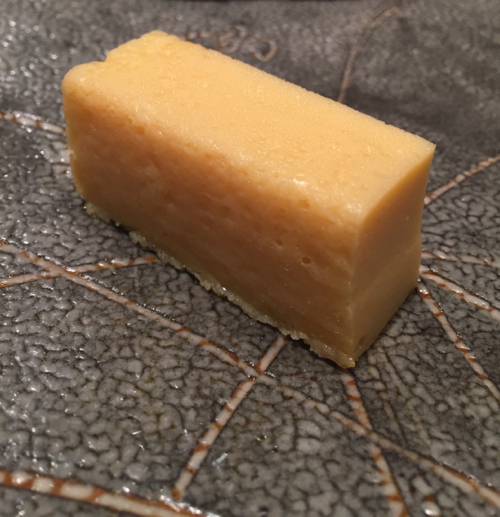 To finish, the usually boring (for us) egg custard Tamago, got a beautifying makeover in the chef’s hands. Tender, almost gelatinous and creamy like a Crème brûlée, this egg pudding slipped smoothly through our lips.
During our chat with chef Ishiyama and our desire to come back for a lunch, we learned that also children aged over 7 years are welcome on Sundays. If your kid is a serious connoisseur of food, consider a treat here in Tokyo.

The price is high, but Ishiyama charges less than most of the two and three-star spots in town. The restaurant can be very tricky to find, but once you spot an Apple store in Ginza, take second right alley and you will be rewarded by an excellent food.

This new location of Sushi Ishiyama is on this business card bellow. Practical to show your taxi driver. 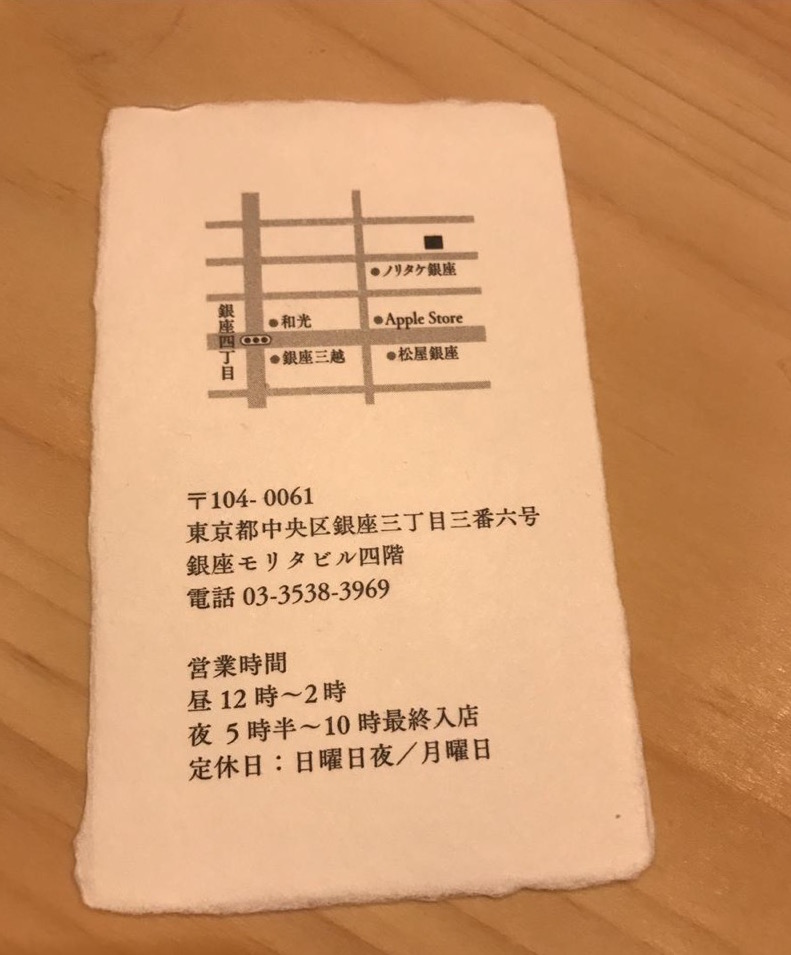 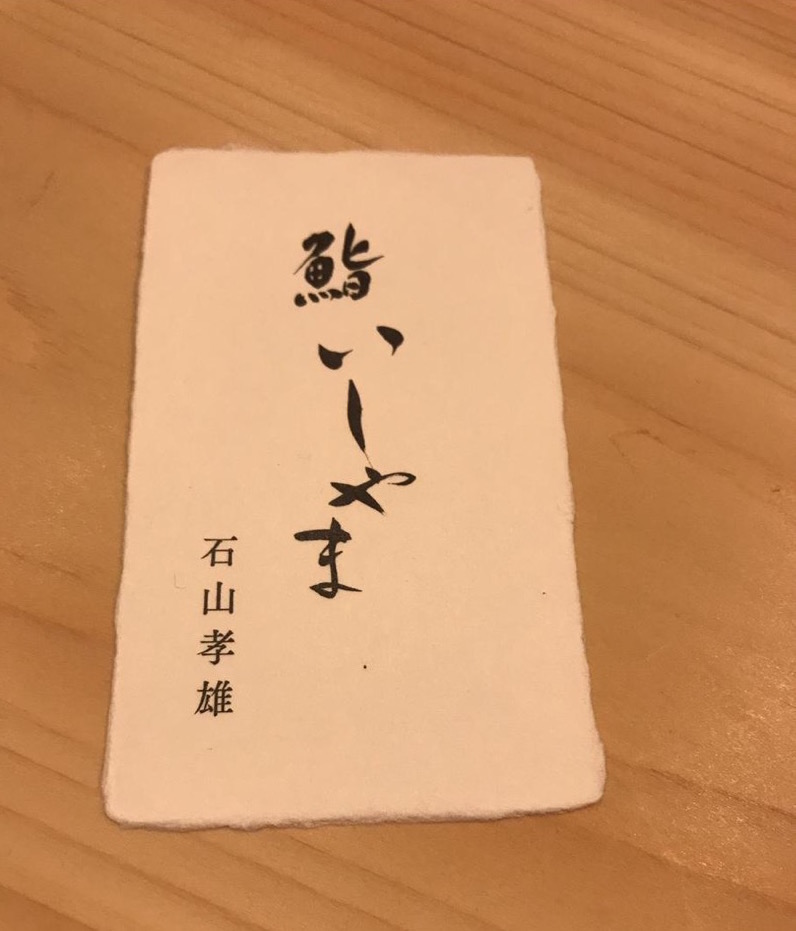